Hey, that’s not a saddle bag! Technically it is, but the folks at Zambale designed a full line of saddle bags to fit on either your handlebars or your saddle rails. I picked up the 7 Litre Saddle Bag from this year’s NAHBS. At the time, I was stoked to find such a nice bag with a DSLR case integrated into it and the reps (who at the time I mistook for the owners), were extremely helpful. It wasn’t until the past few weeks that I finally got around to installing it on my Merckx road and while it doesn’t match the aesthetic of the bike, I found it to be a highly useful accessory to accompany me on my rides. The bag installs perfectly between the drops via two leather straps that mount on top of the finishing tape. There’s a strap that mounts to your head tube as well. For saddle rail placement, just swap it to the rails and the seat post. 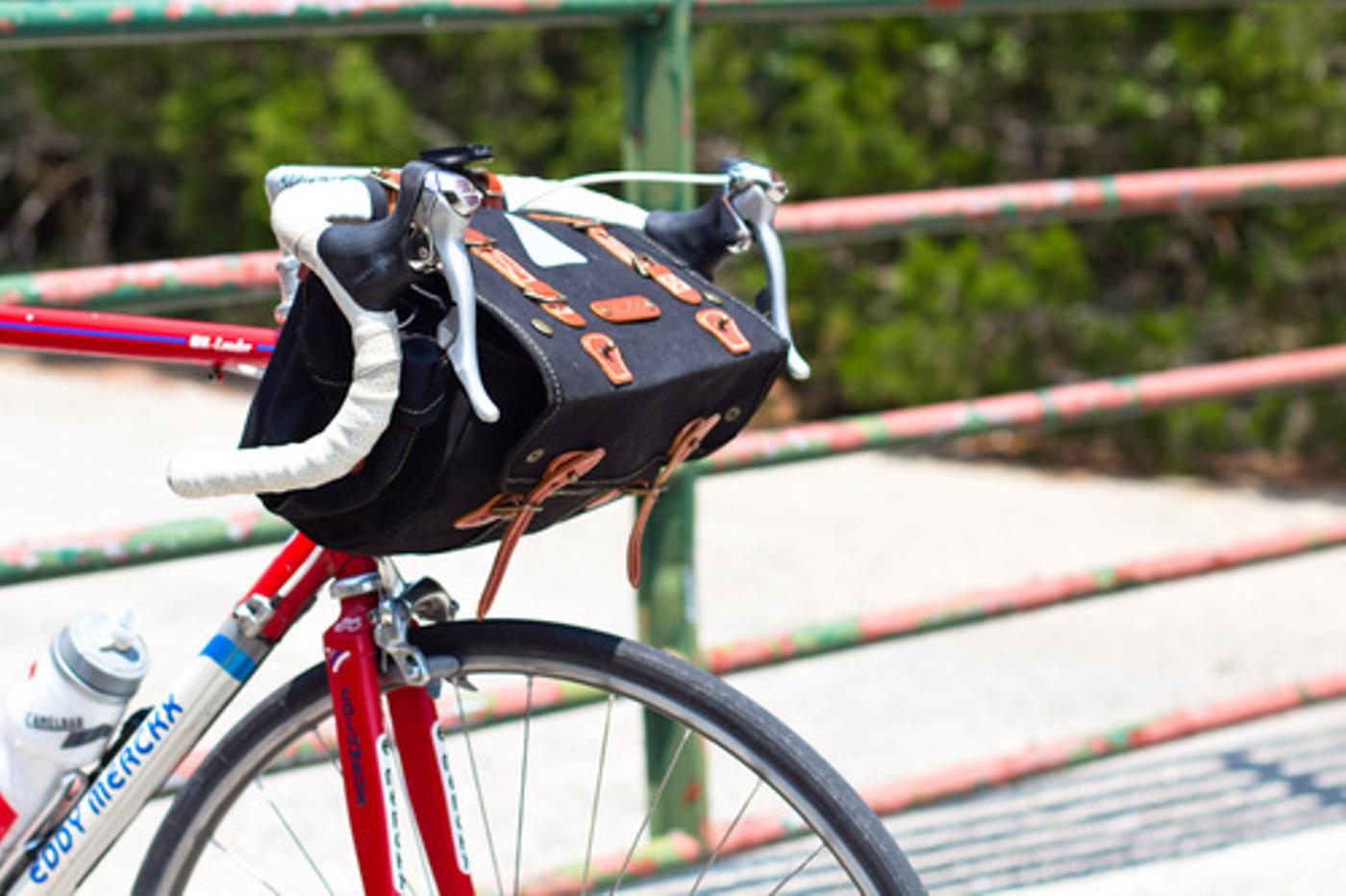 The bag sits a bit slouched forward in this position but it’s still accessible while riding, although I wouldn’t recommend it. Therein lies my biggest critique. I feel like you can’t design a bag to be a saddle bag and a handlebar bag without sacrificing function. On my *Woodville, I have one of the Ortlieb Ultimate 5 Classic handlebar bags which is kinda small and the mount is a bit weird but it’s super accessible when riding. You just unbutton it and it pops open. The Zambale bags all have these leather straps that look nice but aren’t ideal for accessibility while riding. If the bag was reversed, opening out from the rider, it’d be more practical for this use.

*I also used the Ortlieb on my Affinity 212 during our ride to the Philly Bike Expo with zero issues. 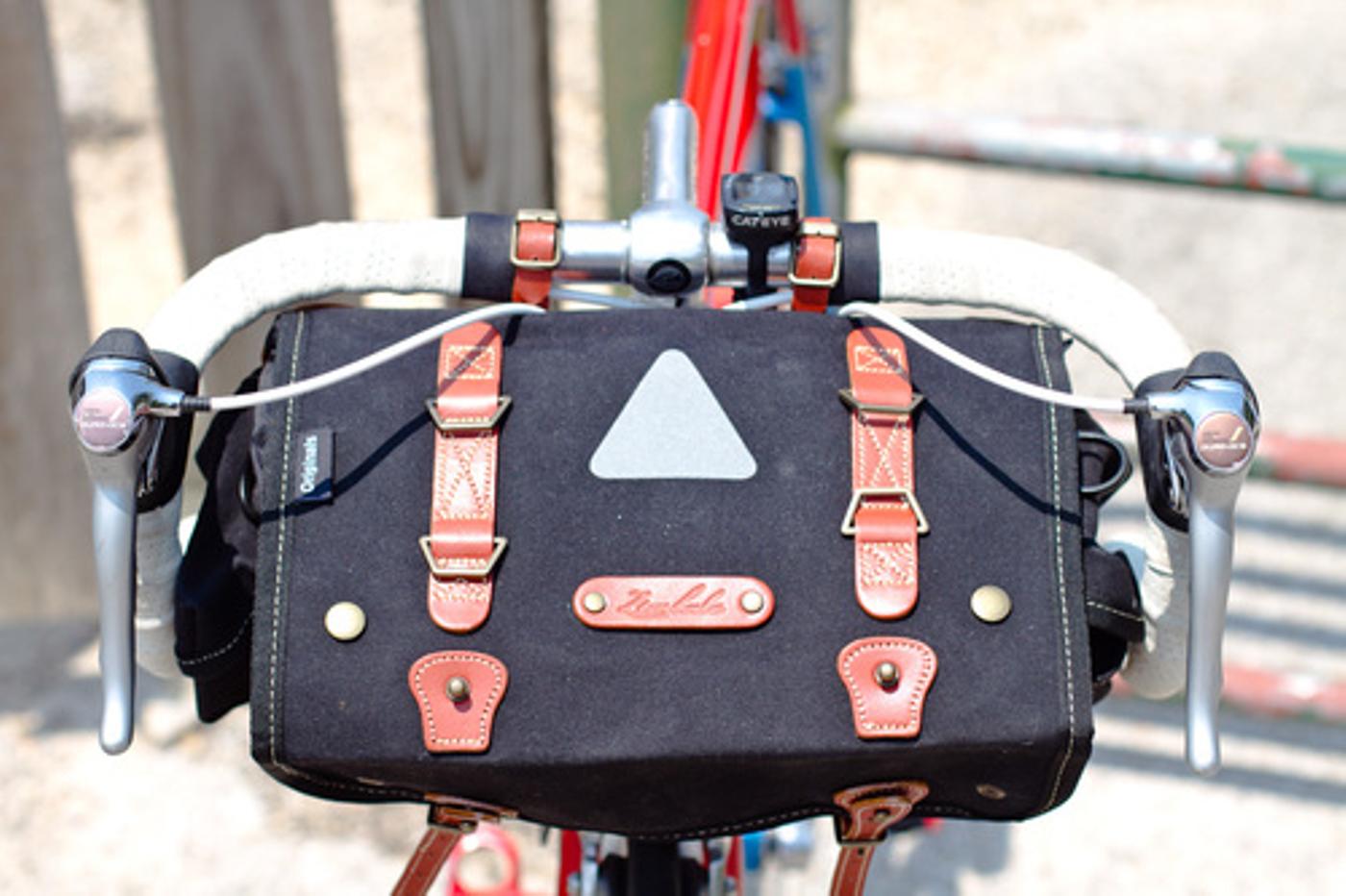 As I mentioned before, the 7 Litre and up size come with an optional DSLR case, which is why my interest was piqued when I saw them. I love taking photos when I go on rides and until now, I’ve been using a point and shoot 35mm. Now I can take my DSLR with a 50mm prime lens or my 35mm Canon with me. But I still have to get off the bike to access the camera. Under the cinch-tie is a padded flap that covers the case. While I couldn’t hold it open and get far enough away from the bag to shoot a photo, you get the idea. So I’ve established that this bag isn’t as accessible as it could be but the shear size of it is spot-on for any kind of S240 ride you’ve got planned or as I like to use it to hold all of my belongings while I jump into the river after a scorching day in the hills of Austin.

Which brings me to my conclusion and a few closing points. First of which is how disappointed I was that a bag made in Korea is being sold at the North American Handmade Bicycle Show. This is one of my major gripes with how Don Walker has shifted this show about American-made products into a cheesier version of Interbike. If it’s not made in the USA, it doesn’t need to be showcased at the show. Just my 2 cents.

The next point is, why buy a knock-off of a classic bag? Ok, duh. They’re cheaper. But looking past that, they really aren’t. Berthoud bags are only a little more expensive and Swift Industry‘s bags (which are hand-fuckin’ made in the US) are the same pricepoint.

Hell, even the Orlieb, as techy as it looks, is less than the Zambale and probably a lot more waterproof (not that I had any issues with the waterproofness of the Zambale). So where am I going with all of this? I’m not entirely sure. I’m partially frustrated that I bought a bag from two reps at the NAHBS that pitched it as it was made in the USA, spent good money on it only to find that it’s made in Korea. But it does a pretty ok job at it’s task which is holding approximately 7 litres of crap while you ride your bike.