The Old Man Mountain Elkhorn Rack solves a critical problem I’ve always had with my mountain bike. As far back as I can remember, owning a set of wheels translated into carrying stuff. A friend on the handlebars of my Sears BMX bike. A case of beer and groceries on the front rack of my old Vespa. An entire apartment in the back of my pickup truck. However, that functionality never existed for me in mountain biking. Beyond my 1993 Stumpjumper, my bike shop “quality” mountain bikes never had eyelets for rear racks. A rack on a front suspension fork was never even considered. That clunky rack stuff made a bike look “uncool” anyway. As most mountain bikers back then, I quickly adopted the “Camelbak” as my standard carry method. I packed water, tools, burritos, extra clothing, and nearly the kitchen sink on my back for decades. Sometimes that backpack seemed heavier than my bike itself. I never loved it, but that’s just what we did. 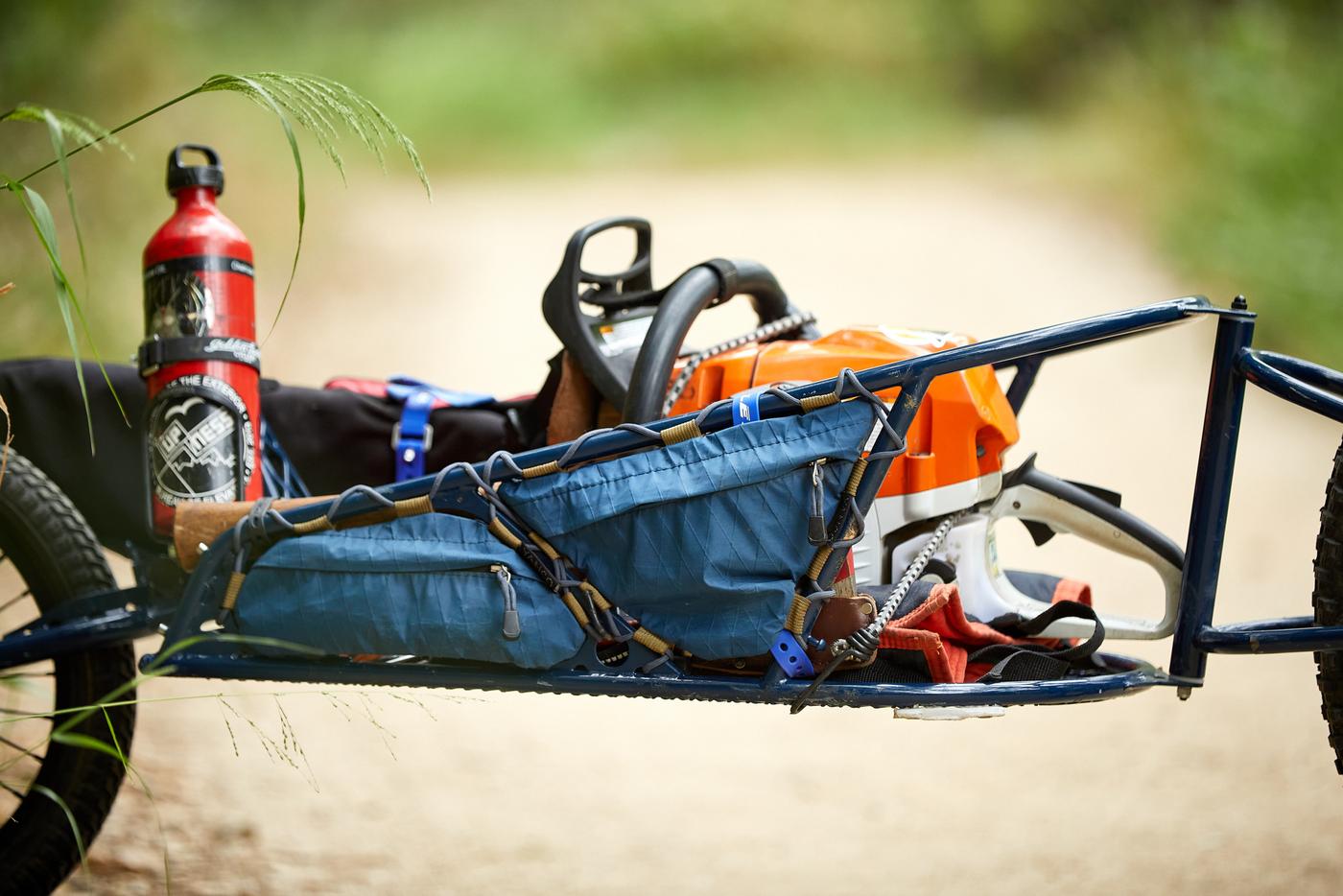 Almost ten years ago, I began volunteering for trail work. The Angeles National Forest has a vast network of narrow multi-use single track, and most work areas are not accessible by vehicle. The veteran volunteers I met had a great solution for hauling tools with their bikes: the BOB trailer. Inspired by them pulling heavy loads on technical trails, I dived into riding tight singletrack with a BOB overloaded by trail work tools.

Despite being a fantastic means to haul gear. the BOB’s loaded weight on your rear axle can significantly “lighten” your front wheel. Riding with a heavy BOB on technical trails demands a bit of finesse. In reality, it is an absolute blast. I’ve found few things more fun than descending singletrack with a BOB bouncing behind me. Following someone with a BOB dancing up, down, and side to side is pretty dang hilarious to watch too. Even with a BOB trailer, I still wore a backpack filled with personal supplies. Sometimes I’d lash my pack to the BOB trailer on top of tools; however, that was always asking for trouble. Dangling straps and sharp tool blades often created headaches and disasters. So again, that heavy pack was usually hanging on my back.

A trail work buddy with a fully rigid mountain bike always lashed gear to his handlebars. What a great way to have stuff easily accessible AND help counter some of the BOB front end “lightness”. However, my preference for a suspended front end was a bit of a roadblock. Sure, I *could* use a handlebar bag. Bike packing options are more accessible and plentiful than ever. But, when I’ve used a heavy roll bag, it significantly messed with my front suspension. Call me lazy, but I just want to grab the bike and go. I don’t want to have to change the air pressure in my fork depending on what weight is on my handlebars. I’d rather spend time digging than adjusting my bike. Old Man Mountain to the Rescue 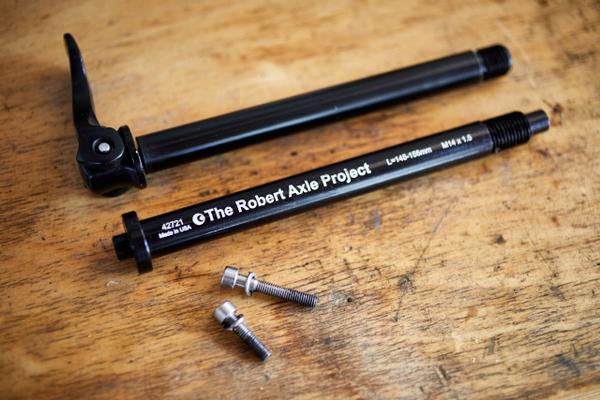 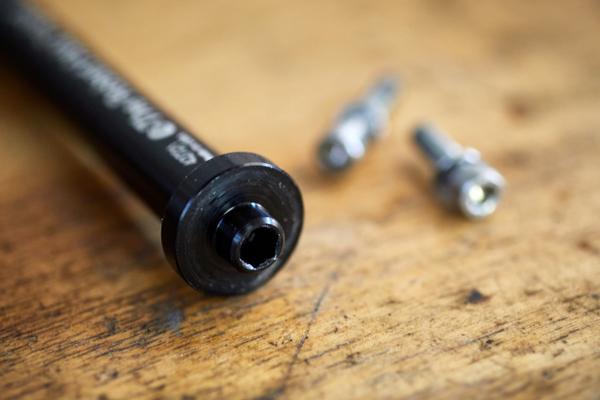 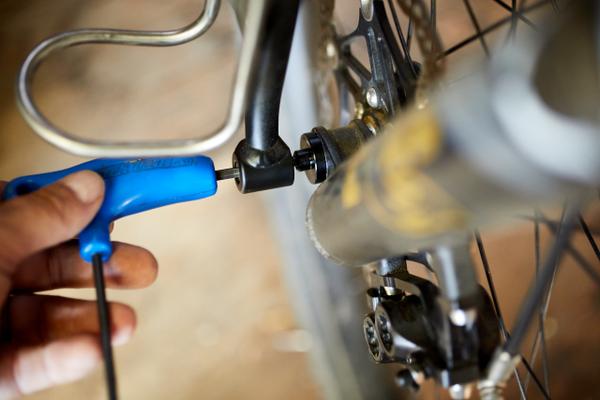 The axle replaces your stock one, and having the correct length and thread pitch is essential. Unfortunately, there is not one dominant standard across all thru axle bikes. Robert Axle Project has an “axle finder” on their website to help ensure you get the right one. There are options for nearly all frames and forks. However, an unthreaded fork axle, like on a Cane Creek Helm, is incompatible. Swapping out my Fox 34 QR axle was simple. The axle installed easily and is tightened with an Allen wrench. The rear trailer axles commonly require a spacer or two. If you have a unique bike not listed in the “axle finder,” reach out to the Robert Axle Project folks. Whenever I’ve had axle fit questions, their team was very responsive. A bright light turned on when I saw the press release for Old Man Mountain’s new Elkhorn rack. This new rack can be installed front or rear on a bike with or without traditional rack mounts. The Old Man Mountain racks can even be installed on full suspension bikes with Robert Axle Project’s thru-axle mounting. Now we’re talking. With a thru-axle compatible rack on a front suspension fork, I saw great potential for my trail work bike. The loaded weight on the Elkhorn is low, and my suspension fork acts as normal. Of course, the weight on your front wheel does change your handling. However, a low center of gravity weight is far more manageable than weight high up on your bike. Your packed gear has much less leverage when its closer to the ground versus on your handlebars or, say, in a big seat bag. Most important to me, no extra preload is put into my suspension fork. I can leave my settings the same as when I ride without any loaded weight. The Elkhorn is truly a game changer for my trail work bike. 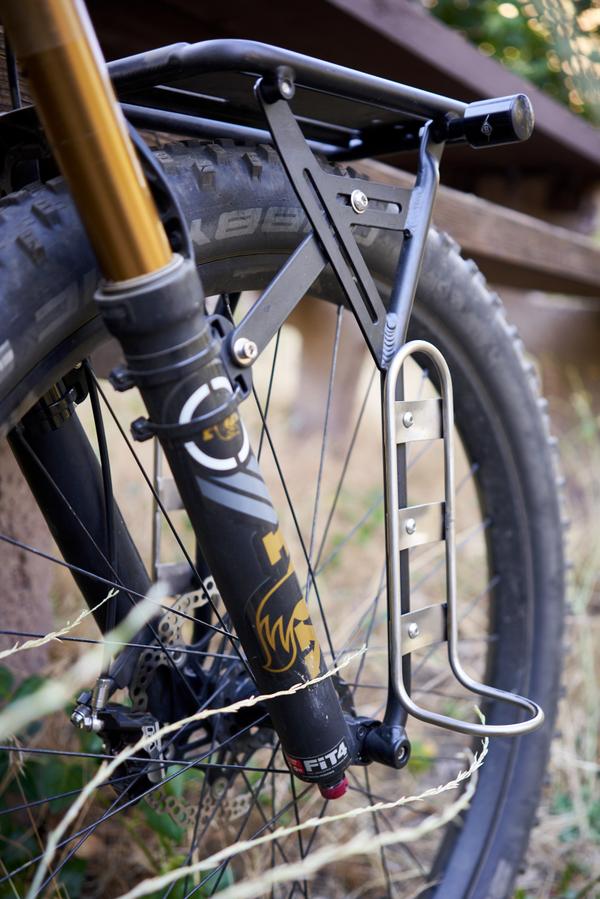 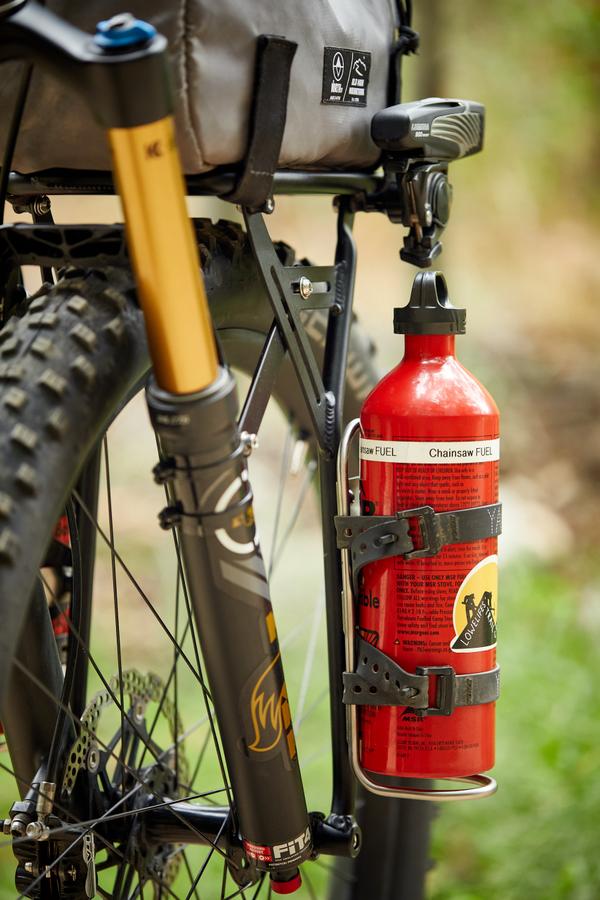 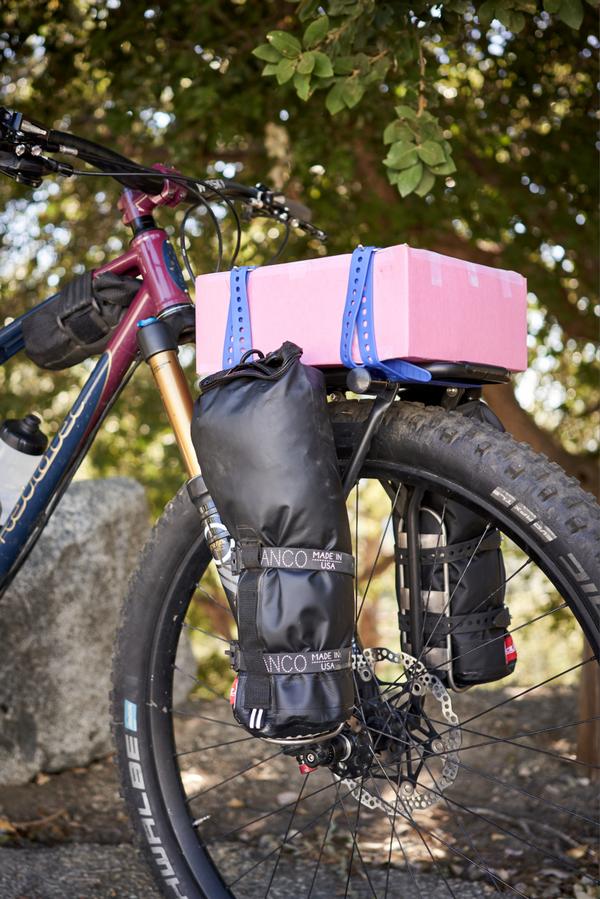 The Elkhorn’s three bolt side accessory mounts open another world with a suspension fork. King Cage does offer a unique hose clamp style accessory mount I could use, but the Elkhorn is a better complete system solution. Now I can easily lash on extra MSR bottles of oil/fuel on chainsaw days. I see many people mount large Nalgene bottles here or whatever they can stuff into small cargo bags. Opportunities seem endless with these sturdy mounting points now on my suspension fork.

Old Man Mountain collaborated with North St. Bags on a roll top Trunk Bag specifically for the Elkhorn. The bag lashes securely to the rack rails has a sturdy form, and has a smart compression strap with multiple hook points. I can pack multiple burritos and trail beverages with plenty of room for another clothing layer. The bag can hold more than I expected and will get quite tall. Packing heavy stuff on the bottom and light stuff up top helps reduce any side-to-side sway. However, I’d carry a couple of long Voile straps in case movement bugged me and I wanted to really cinch it down. I did notice the rails on the Elkhorn are thick and would utilize Voile’s bigger 13mm Rack Straps. On a recent overnight trail work weekend with Lowelifes Respectable Citizens Club, I used the Elkhorn and Old Man Mountain’s Divide rack to haul all my camping gear and trail work supplies. The Divide is the Elkhorn’s bigger brother with a larger top platform and more side support to carry pannier bags. Its pannier rails are lower than a traditional rack which helps drop your center of gravity for a more stable ride. I attached a set of King Cage Manything cages to the Elkhorn’s cargo mounts, and a good friend loaned me a couple of fork cargo bags. I lashed a locally baked pie for our volunteer’s dinner to the Elkhorn’s top platform. With some interior pie box reinforcement, plus some bubble wrap, the berry pie arrived at camp in great shape. Before the Elkhorn, all this stuff was loaded into my backpack. Without a heavy load on my back, I feel so free & energetic in the bike’s cockpit. It’s lovely. I was really impressed with how balanced my bike felt with gear distributed to both front and rear racks. It’s funny to get excited about the ability to carry more stuff on my bike. But that’s where I’m at: simply stoked that my favorite bike is now far more versatile. Since I don’t have to give up the comfort and performance of my front suspension fork, I am ready to overload my bike for another weekend of trail work.