A Brief on Los Angeles Mountain Bike History with MWBA
Words by Erik Hillard
Photos compiled by Erik Hillard from the MWBA Archives, on diplay now at Mission Workshop LA.

I rode my first mountain bike in the Santa Cruz Mountains while in high school and working at a bike shop in Salinas, CA. It was the early 1990s and by then, local hiking and equestrian anti-bike groups had prevailed and bikes were illegal on single track. There were few places to ride legally and I grew up with tremendous gratitude for legal trails when I found them.

Later I moved near Pasadena, CA and started to explore the adjacent Angeles National Forest. I was amazed at the miles of open trails for mountain bikes. How was access to this amazing forest preserved when so much of California single track was lost for mountain bikes in the 1990s? Many cyclists are not aware of what happened in the mid-1980s in the forest above Pasadena. Local riders pedal through the forest every day but few know how this access was won. Bicycles were not unheard of on dirt roads and trails in the Angeles National Forest; however, mountain biking grew exponentially in the mid-1980s with the wide release of the Specialized Stumpjumper and other dirt specific bicycles. In 1985, local Pasadena newspaper articles appeared about trail conflict. Alan Armstrong rode the Mt. Wilson Toll Road and along with others enjoyed the Henninger Flats campground a few miles above Pasadena. As more people pedaled on the steep fire road, the local equestrians began to write letters complaining about speeding bikes and expressing concern for safety. Equestrians wanted bikes banned from the Toll Road and the forest. In December 1985, The City of Pasadena, Water & Power Department posted a “No Bicycling” sign on the Toll Road gate. Armstrong and other cyclists organized a letter writting campaign and the sign was removed. The “wheels were turning” now and in 1986, Alan Armstrong founded the Mt. Wilson Bicycling Association with the purpose of educating fellow riders and to defend access for bikes in the forest. In 1993, Alan was inducted into the Mountain Bike Hall of Fame. Through education of mountain bikers and their strong trail work volunteer force, the founding members of MWBA literally saved mountain bike access in the Angeles National Forest. Mt. Wilson Bicycling Association is one of, if not the first organized mountain bike trail work and advocacy groups in the United States. The actions of the original MWBA volunteers showed the local USFS staff how serious mountain bikers were about care of forest trails and educating fellow cyclists on proper trail courtesy. The Angeles National Forest had never experienced anything like the trail work machine MWBA quickly became. But don’t think MWBA was all about business. This crew was just as serious about “beverages” as they were about their trail work. MWBA personified “Work Hard, Play Hard.”

Around 2014, I joined the MWBA Board and started designing trail work flyers, etc. With my photography background, I was pretty interested in the few images around of early MWBA days. Kyle from Golden Saddle Cyclery introduced me to original MWBA member Ray Juncal and the early world of MWBA opened up. Ray has been an essential piece in connecting the current generation of mountain bikers to the past success and trail work of MWBA. I spent hours with Ray flipping through photo albums and sifting thru flat files of original MWBA artwork. Everyone who knows Ray strives to be #RadLikeRay 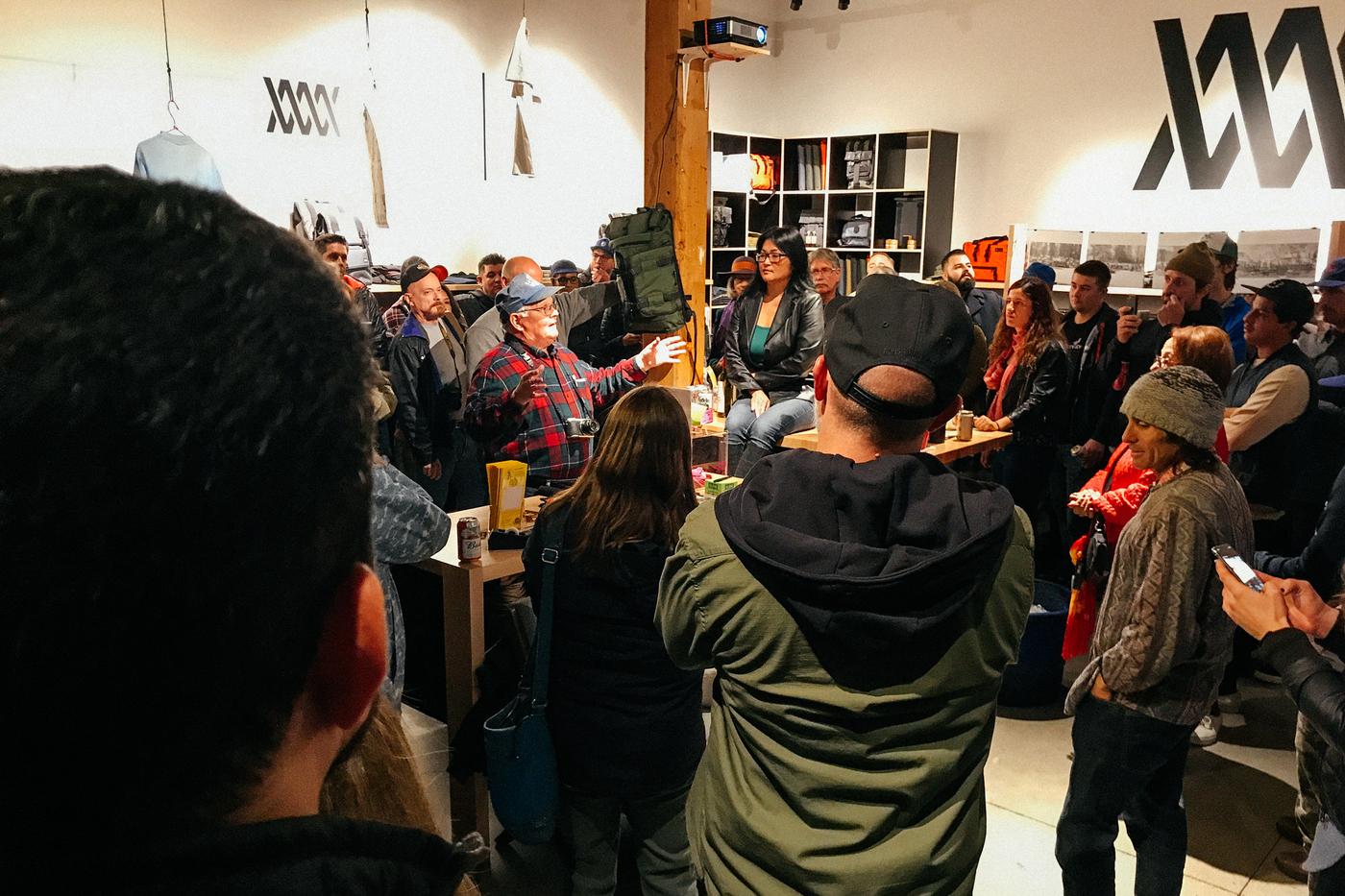 Eric Brunt from Mission Workshop approached MWBA Trail Boss Matt Baffert about hosting an MWBA exhibit at the new store in DTLA. The idea of a MWBA History Exhibit was born. Ray and I started reaching out to other original MWBA members and Alan Armstrong rose to the occasion. Alan dug out boxes of prints, slides, and presentation boards from his storage space and I quickly found myself overwhelmed with imagery and stories. I spent the next few weeks scanning, copy photographing, and editing images to curate the exhibit. The image gallery here represents a few of the images now on display at Mission Workshop DTLA. Well over 100 prints are up in the store as well as display boards about the start of MWBA, the Ken Burton trail, and MWBA today.

Mountain biking in the Angeles National Forest would look very different today without the early success of MWBA. Everyone who pedals on a fire road and any single track trails today in the Angeles National Forest has the early MWBA volunteers to thank. Today, MWBA is a strong trail work force and their monthly work days help keep trails sustainable. The current USFS staff sees mountain bikers as a valuable trail work resource. 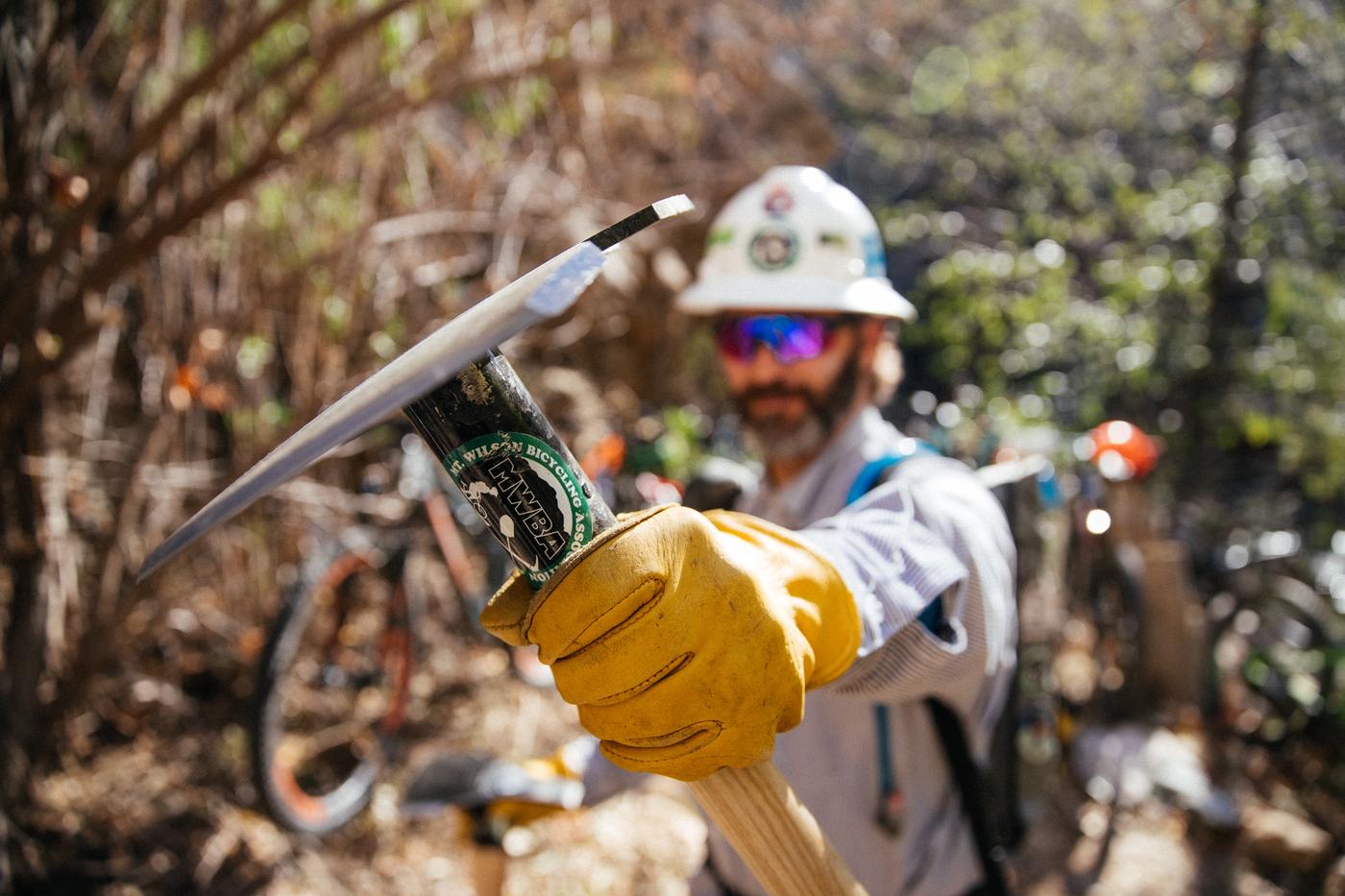 Don’t take your trail access for granted. Your ability to ride in the dirt has been won by sweat equity of the volunteers before you. Find your local trail work organization and show up. Move some dirt, get involved. Make new history.