Fenders aren’t exactly my favorite bicycle accessory. Granted I live in Texas where it “never rains” or so it didn’t really until this year. We’ve had a very wet spring and summer, resulting in a lot of unexpected rain riding. So much so that I finally broke down and decided to ditch the big, plump tread of my Bruce Gordon Rock n Roads for some fenders and the biggest tire I could find that would fit…

Getting rid of the Rock n Roads took a lot of convincing. After all, my Woodville was designed around them and the riding that I was planning on taking on with it. They’re just so damn smooth and incredibly durable. In fact, I just recently took this exact pair off after over a year of riding. But as previously stated, a wet few months forced me to embrace fenders, so here we are.

To make things simple, here’s a brief overview on both the fenders and the tires… 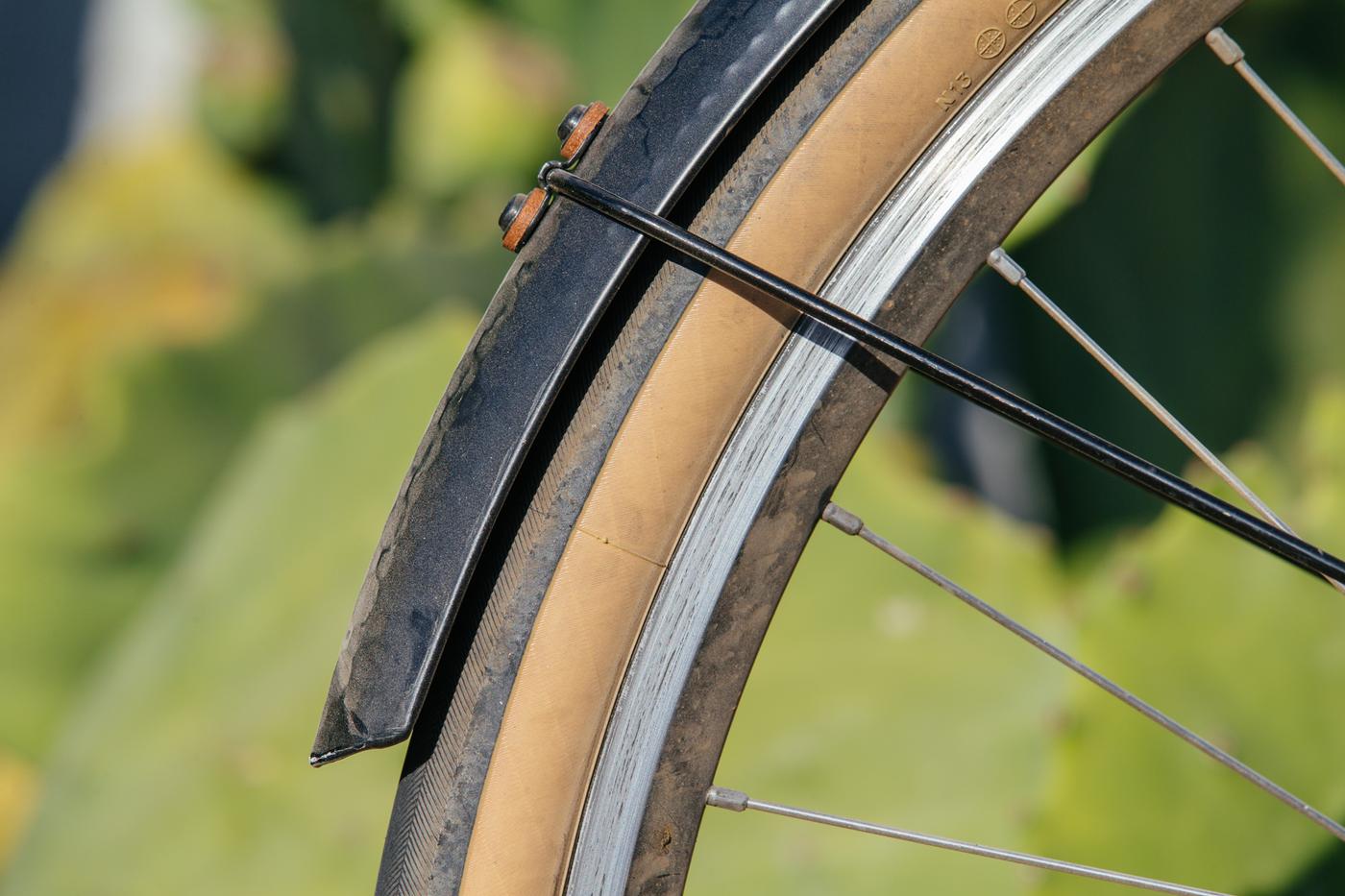 Fenders
The Handsome Mud Butler fenders come in a 45mm width, but most importantly they come in black. Their hammered finish, cork washers and sleek hardware are very similar to many of the Japanese fender offerings. While I’ll usually err on the side of Japanese-made fenders, the Handsome Mud Butlers fit my Geekhouse Woodville touring bike’s aesthetics better. You know, the blackest ever black. 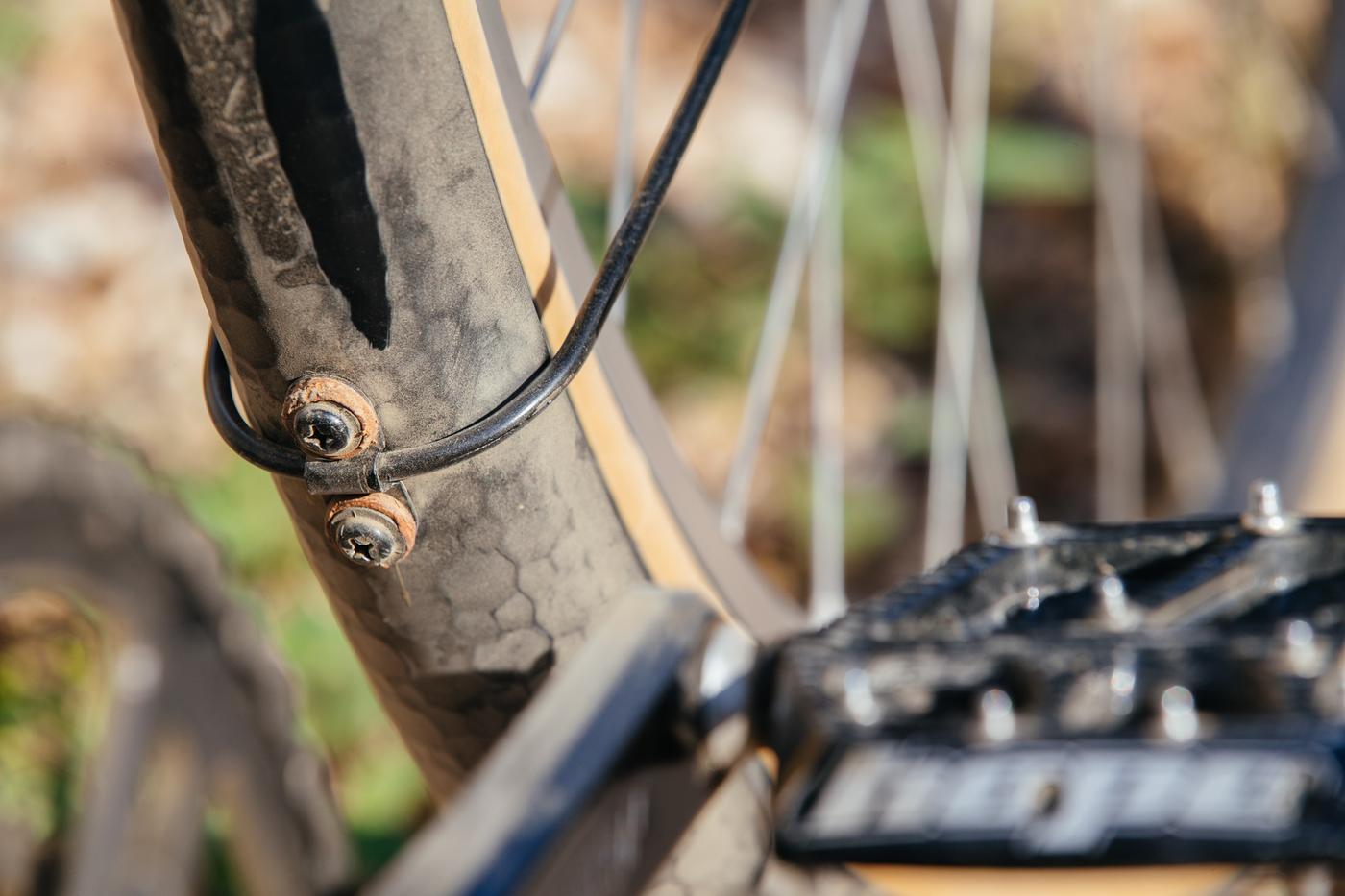 Installation was simple. With an eyelet in the fork steerer (thanks Marty!) and standard fender mounts on the bike, they went on easily. Even after weeks of use, they’re still securely fastened and rattle free. In fact, these are some of the quietest fenders I’ve used to date. No rattles and no need to re-align them. Even after the bike’s fallen over and been locked up to crowded racks.

Now when it rains, I stay dry and when I ride the bike off-road, it cuts down on dust getting into my drivetrain. Still, if I were to ever take this bike into potentially muddy riding conditions, I’d swap them out for 43mm Rock n Roads. I don’t think there’s quite enough clearance for any sort of mud or trail debris. 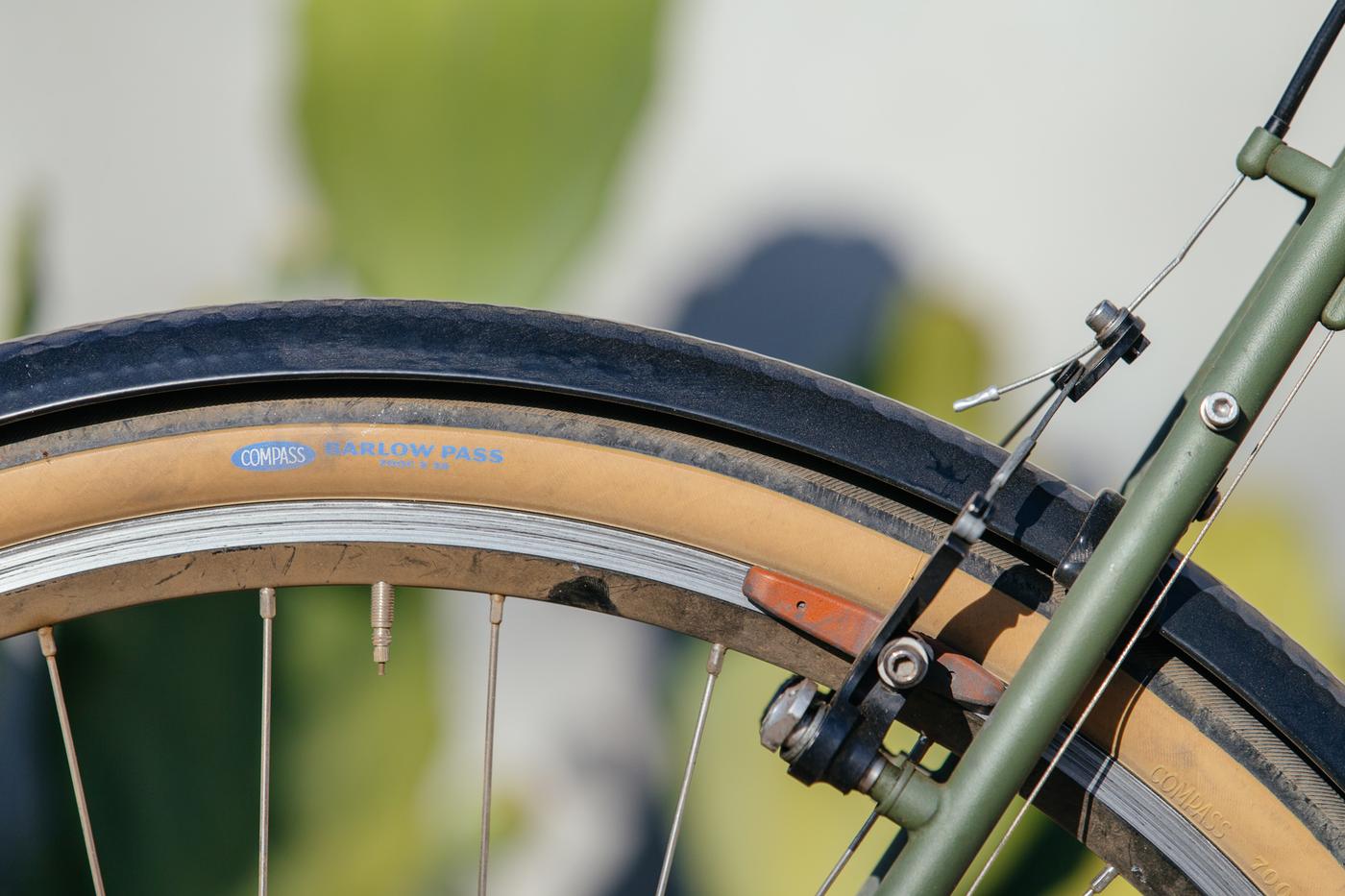 Tires
There are quite a few offerings for a gumwall tire on the market. Rivendell makes a few, as does Panaracer and Challenge. Having ridden most of the previously mentioned brands, I was eager to try out the Compass Cycles Barlow Pass 38mm tire. It’s reminiscent of the Gran Bois, but will still fit under a 45mm fender with enough clearance to avoid debris being lodged into the fender and annoying rub. The photos make the clearance appear to be non-existent, but there’s a good amount of room, so don’t worry. ;-)

I have to say, these tires ride like a dream. Pumping the front to around 30-35 and the rear to around 35-40 psi, I’ve found them to be smooth sailing on sealed road and gravel paths. Even in the quick downpours we experience here in Austin, the tire grips the oil-slick roads with ease. Gravel paths. No problem!

Since I don’t keep a computer on my touring bike, I have no idea how long I’ve ridden them for but after a few weeks of constant use, I’m sold on this setup. 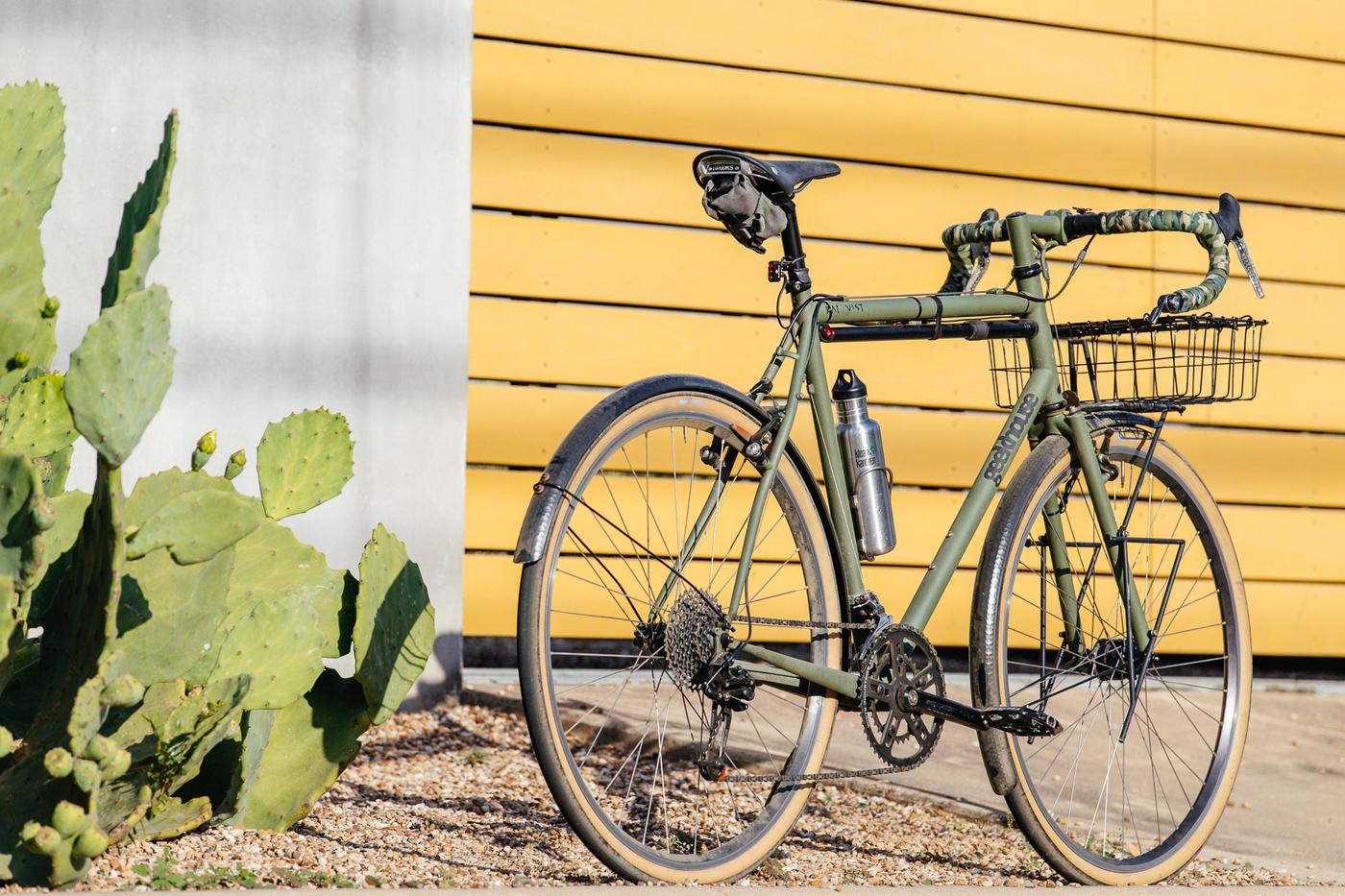 Overall
Everything on this bike has held up beyond my expectations. The White Industries VBC cranks are still going strong, as is the Phil Wood bottom bracket and SRAM drivetrain. I’ve cleaned and serviced the Chris King Classic rear hub a few times, but haven’t had to touch the SON generator hub. Recently, I spliced a Supernova rear light to the Edelux lamp and save for the lack of internal routing, it looks and works great.

After breaking a few of the Velo Orange decaleurs and not finding a system that worked, I ditched the Swift Ozete Bag for a Wald basket and cargo net. The way I look at it, I can fit a lot of crap into a Wald basket, especially when it’s lined with a tarp. If I have items that need to stay dry, I simply put them in a dry bag. Easy in, easy out. Ideally, I’d like to put a bigger basket on the bike and find someone to make a bag that suits my needs, but that’s a whole ‘nother project.

Overall, I’m very impressed with not only the longevity of the components, but the durability and consistent pleasant ride the Woodville has delivered. This bike is a dream. No creaks, no nonsense, just precision riding all around. The guys at Geekhouse really know how to make a looker that takes kindly to bookin’ around town, as well as being loaded down.

Thanks to the more than capable hands at Mellow Johnny’s for the help building it up.