Since this bike first showed up at my door here in Los Angeles, I’ve really enjoyed riding it. While the kit that Kris from 44 Bikes delivered for the review interim was more than acceptable, it felt good putting both my old parts on it and new wheels, which made a world of difference. Wheels are like that though. You think everything is peachy-keen one day and the next you’re rolling on new wheels, having your mind blown. Call me naive but I didn’t think a wide rim like the Ibis 941 would make that big of a difference on a hardtail. Truthfully, it didn’t feel like it until I seat the WTB Trail Boss 2.4″ tire on the 41mm outer, 35mm inner width rims.

To say it was like a whole new bike might be over-doing it, or perhaps it captures my enthrallment or excitement. Either way, I do not want to take them, or these tires off my 44 Bikes Marauder anytime soon. 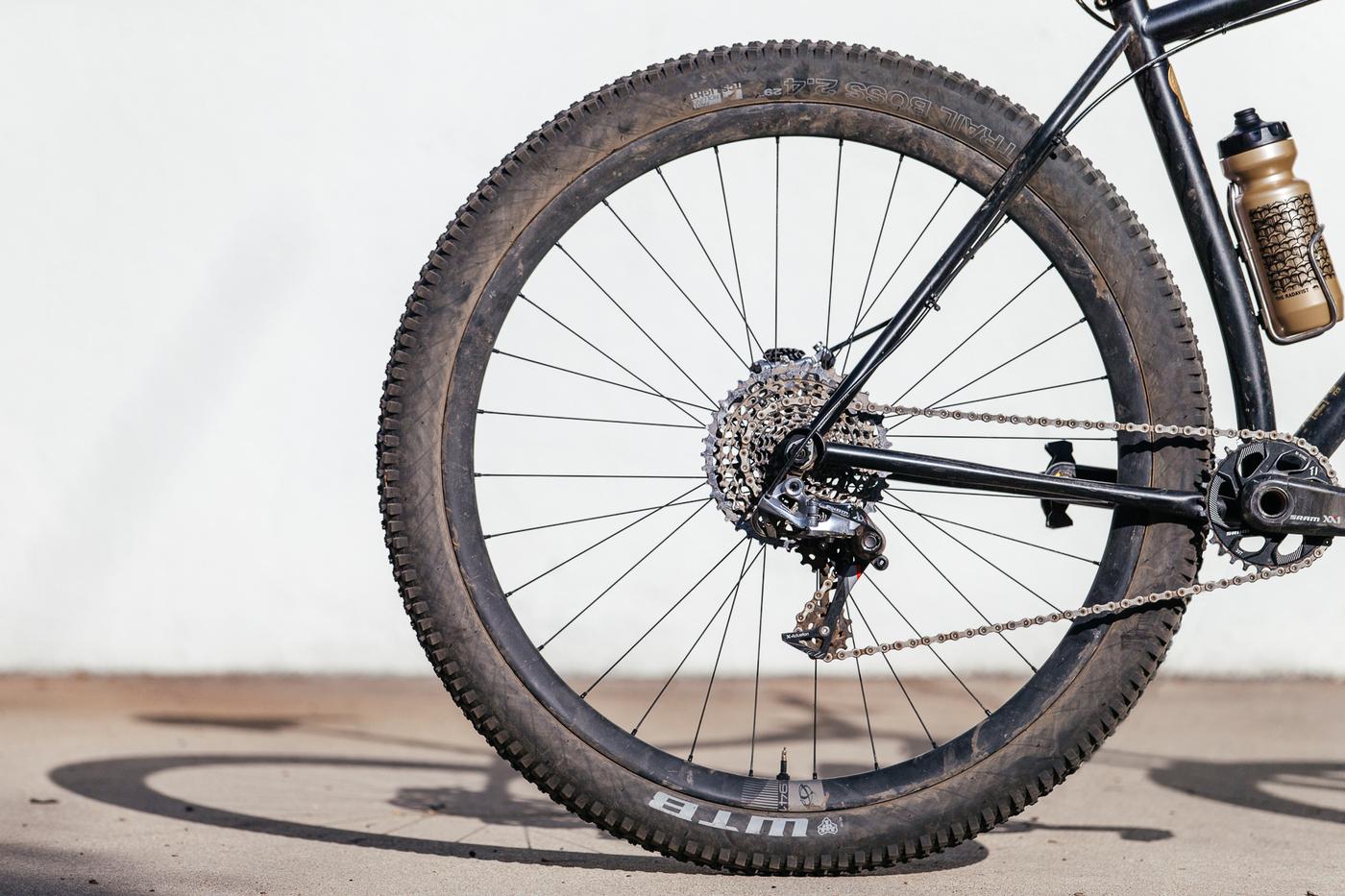 Wide Load
Ok, let’s get real. We all know wider is better in terms of rim width. Everyone from the pro peloton to Jan Heine are in agreeance with that. The problem is, can your bike, like, your current bike benefit from a wider rim. In my opinion, you’ve gotta be able to cram at least a 2.3″ or 2.4″ tire into the rear triangle of your bike to make them worth while. In past trails, I’ve ran smaller tires and felt I wasn’t able to nail down the correct feel. It wasn’t until the 2.4″ Trail Boss tires that the bike as a whole really began to sing. And by sing, I mean hook up on corners and what many people would consider “shred.” Sure, there’s tons of technical mumbo jumbo that plays into this, all of which I am not capable of diving into, nor do I care to, these are simply anecdotal references. 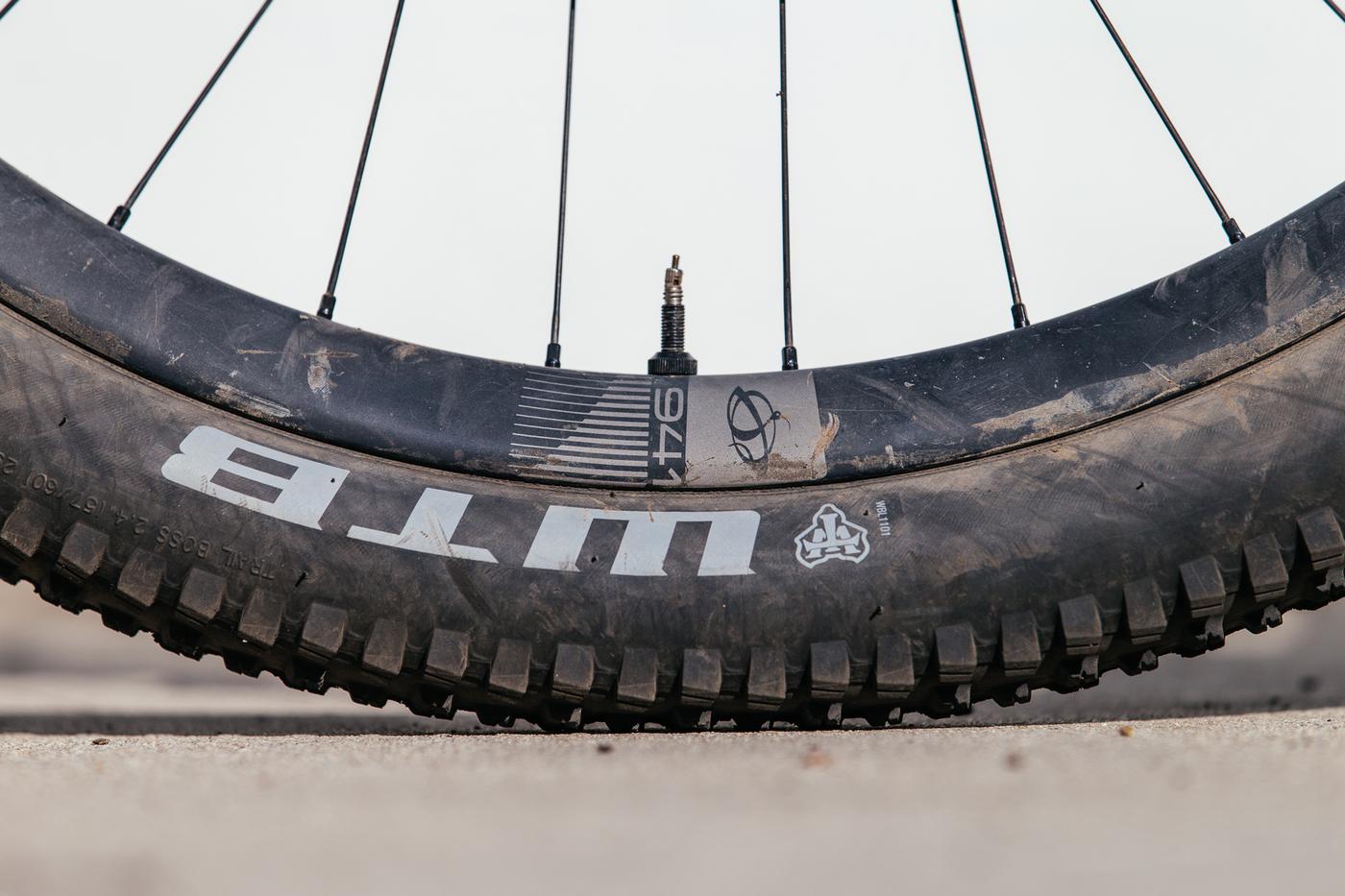 Wheel Talk
The Ibis 941 wheels have been updated since I received this set to review. They’re now the Ibis 942 wheels, with an asymmetric rim design, the same width, a lower height, but are lighter, stiffer, etc. I.e. they’re new and improved. These wheels I’m currently riding are, as far as I’m concerned, the shit. So I can’t imagine them being any better but that’s technology for ya.

Here are the current specifications: The front and rear hubs are the trusty, hassle-free DT Swiss 350. The 941 rim width is 41mm outer and 35mm inner, with a 32h drilling. They’re super easy to set up tubeless, even with just a floor pump. The spokes are triple butted and in the year or so of thrashing and crashing haven’t needed a single true. The cost on the new 942 wheelset is around $1,800 depending on where you get them from or the wheels pictured here can be purchased for $1099 from Ibis. These weigh around 1780g.

Plenty of Rubber
As mentioned before, in order to take advantage of a wide rim, you really need to go as big as you can with your tire. Contrary to what some might think, no this does not make you slower, depending upon the casing and tread. In short: with the right tire and a wide rim, you won’t notice any sort of lag like you would going full on plus or fat. For a 29’r, I found 2.4″ or 2.5″ is the way to go, personally. I really can’t sing the praises of these tires enough!

Why Carbon?
Ok, I’ll be really honest here. I love wheels like the Velocity Blunt SS but I tend to go through those rims almost twice or three times as fast as I would go through a carbon hoop. Having never broken a carbon rim, I can’t say for sure how long it’d take to actually ride one until it fatigues and cracks, so I’m just guestimating. Carbon rims are stiff and on a mountain bike, I love the way they feel. The problem is, you’re either staring down the barrel of an ENVE wheelset with King hubs for $3,000 or some mystery eBay wheels for under $1,000. The nice thing about the Ibis wheels is they’re all reasonably priced and backed by a three year warranty. Some of them even come laced with Industry Nine hubs now.

Closing the Gap
Look, wheels are pricey and they can be a daunting thing to consider, which is why it’s best to actually ride the damn things if you can before buying them. Your local Ibis dealer will have a demo day (hopefully soon) so make sure you pedal around on a bike with these wheels before you pull the trigger. Personally, I couldn’t be more pleased with their feel and performance and if I had to buy another set, I would without hesitation. The only qualm I have is wanting a louder freehub, with as mentioned before, has been since resolved with the Industry Nine spec.

If you have any questions, drop them in the comments and see all the specs your heart desires at Ibis.