As a Radavist, I swear to shred and recently that word’s been used a lot in terms of bike reviews. Shredding doesn’t imply you’re the fastest, or the best at hucking, it’s subjective, dependent upon your skill level and the trails you ride. Here in Southern California, the landscape is arid, exposed, rocky, rutted and loose. Having a nice and nimble bicycle underneath you aids in that ever-elusive atavistic urge to play.

Then Kris from 44 Bikes up in New Hampshire came knocking at my inbox with a proposal. He’d build me a Marauder 29r to demo, Fox, SRAM, Thomson, WTB, RaceFace, Industry Nine, ENVE would supply the goods and I’d get to try it out for an extended review. Nice! What’s the catch? Well, when you review a bike and you like it so much, you might just end up wanting to buy it. Dowhhh… The Marauder is a simple concept: a custom geometry, tig-welded 29’r with a slack front end of 69º and a chainstay of 420mm. With clearance for a big ol’ fatty tire in the rear, you end up having to bend the seat tube to get that rear wheel in and around the seat stays. Kris wanted to make the bike all black and after a plating issue on the Ti Nitrade head badge, which resulted in a gold coloration, he made the decals to match. Not my first choice in terms of aesthetics but damn, it looks better than I thought it would. It’s been a long time since I’ve ridden Fox forks and when Kris recomended we try out the 2016 34 Float 29” with a FIT4 Damper, I obliged. Having been so used to the RockShox Pike, the Fox 34 felt almost identical in the realm of “set it up and don’t think about it.” I don’t like having to play with forks too much. Rebound was easy to square away, so I set it up according to my weight and let it rip. 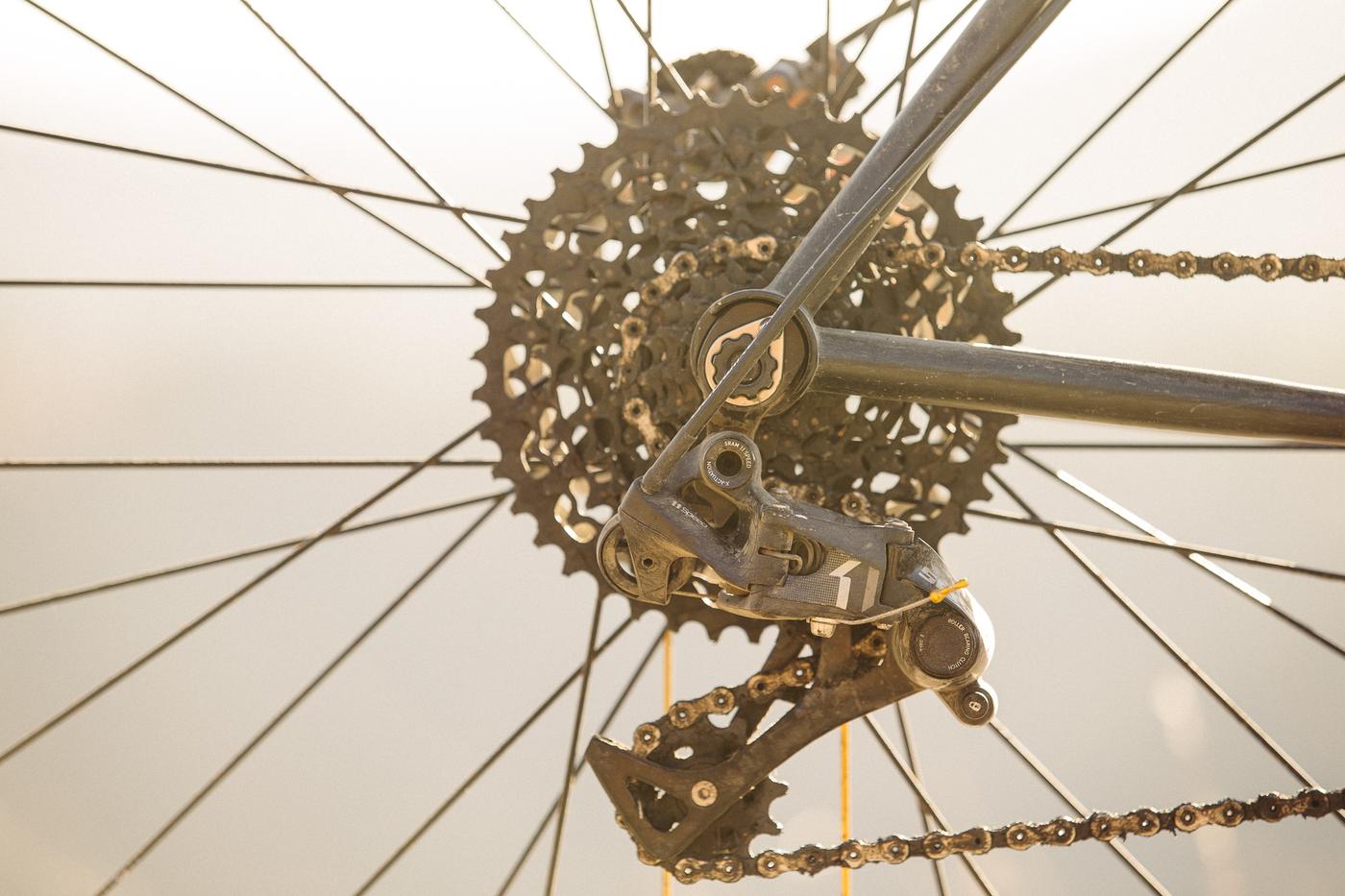 SRAM’s X1 drivetrain is a no-brainer at this point… … yet Kris went with a US-made Wolf Tooth ring and RaceFace Turbine cranks, a simple way to set this bike apart from a standard X1 group build. The cranks and the ring add to the no-nonsense stance of this bike. 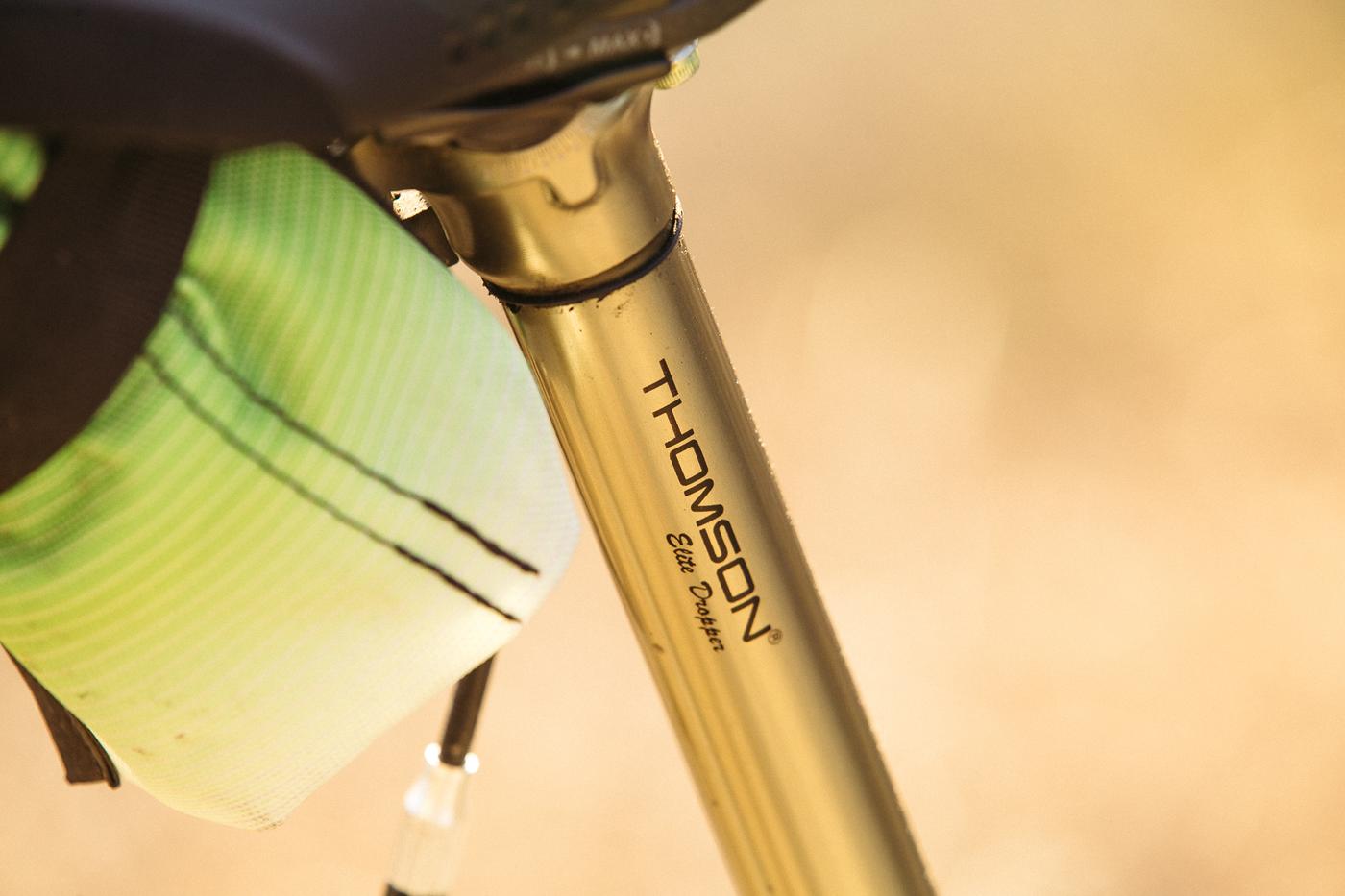 Adding a dropper post to a hardtail increases its versatility ten fold. Suddenly, you’ve got so much more room to let the rear of the bike bounce off rocks and other interestingness found on trails. Thomson’s Elite Dropper is amazing and I ran into no issues in the few months I had this bike. Plus the gold matches the Kashima coating on the Fox forks. Aesthetics don’t influence performance but it’s a nice tie-in. 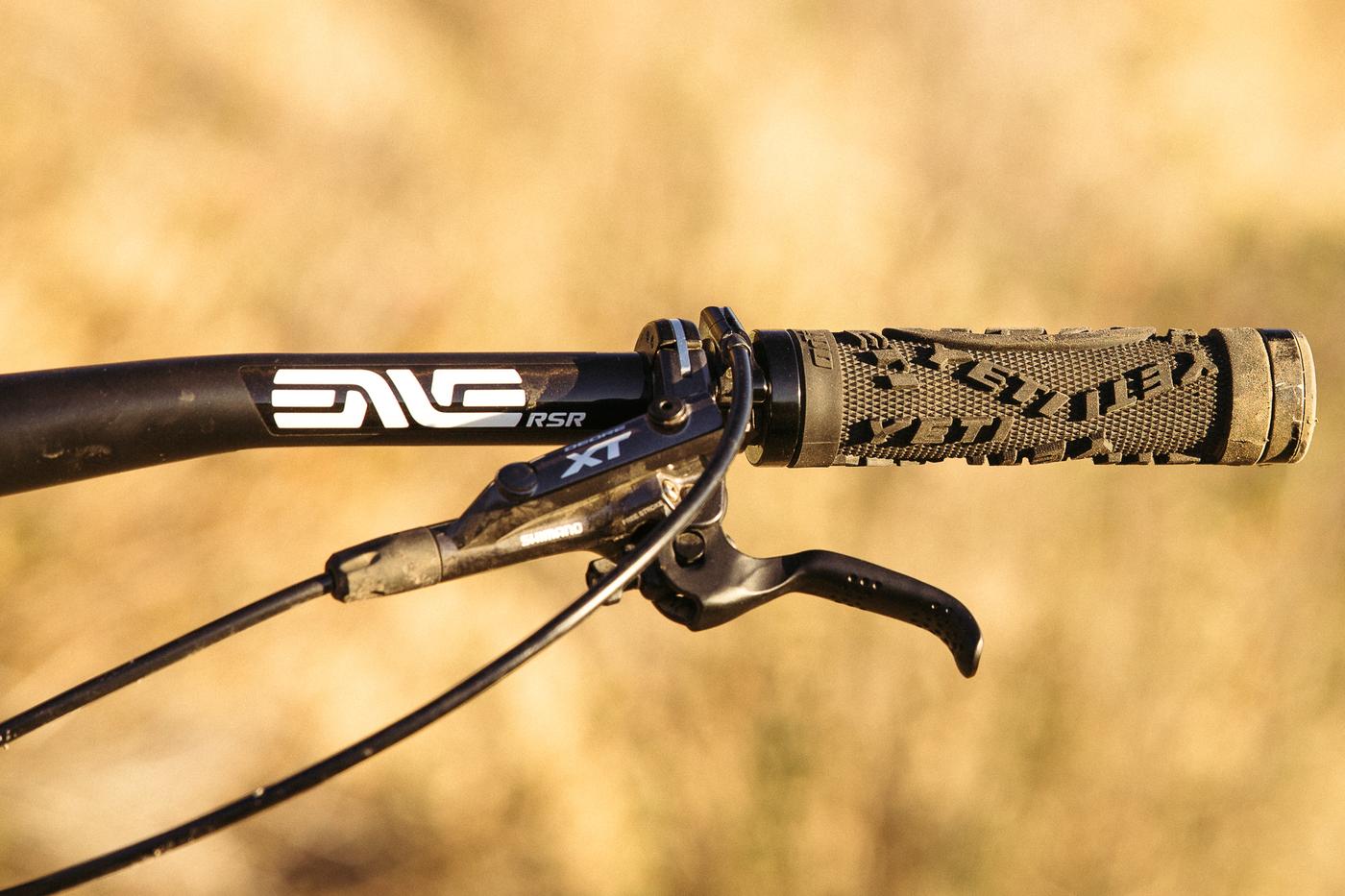 XT brakes! The best bang for your buck. Again, no issues and having never ridden the ENVE RSR bars, the cockpit changed the way I felt about riser bars… and it doesn’t stop there. 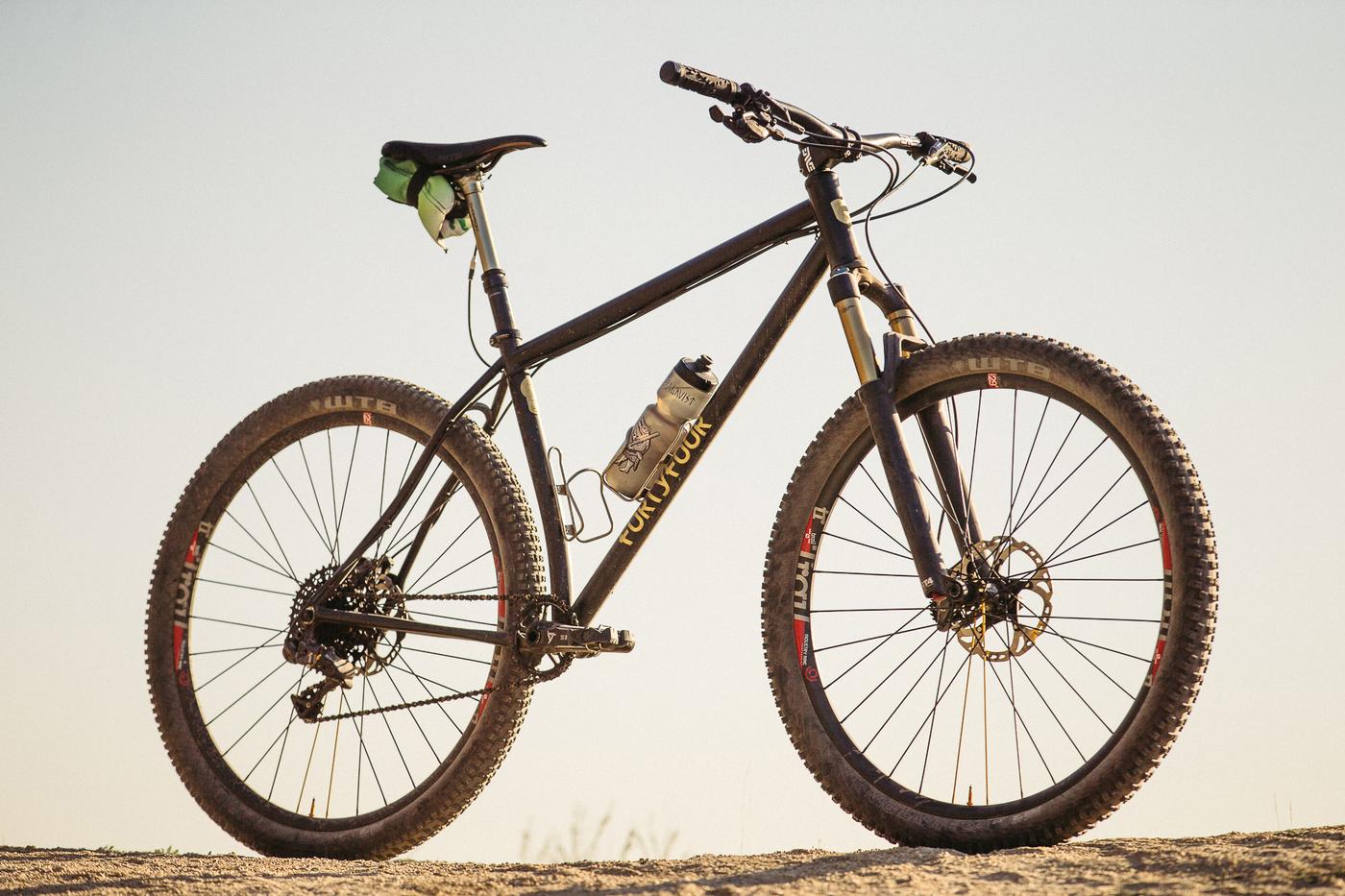 The Marauder has a much higher front end than my Rosko and part of that is Kris’ philosophy on mountain bike fit. The long head tube, combined with the riser bars really make this bike super shredable. While it took me a few rides to get used to, I found myself enjoying a more upright position, especially when going downhill.

Just when you thought #wheeliewednesdayz couldn't get any better! @tytanium did all of his pedaling before his front wheel left the ground, I call this Pedal for Speed and then Manual for Free!

There’s no real easy way to describe this sensation, other than my friend Ty who called the bike “a big BMX bike that’s super fun.” Simple enough for me! 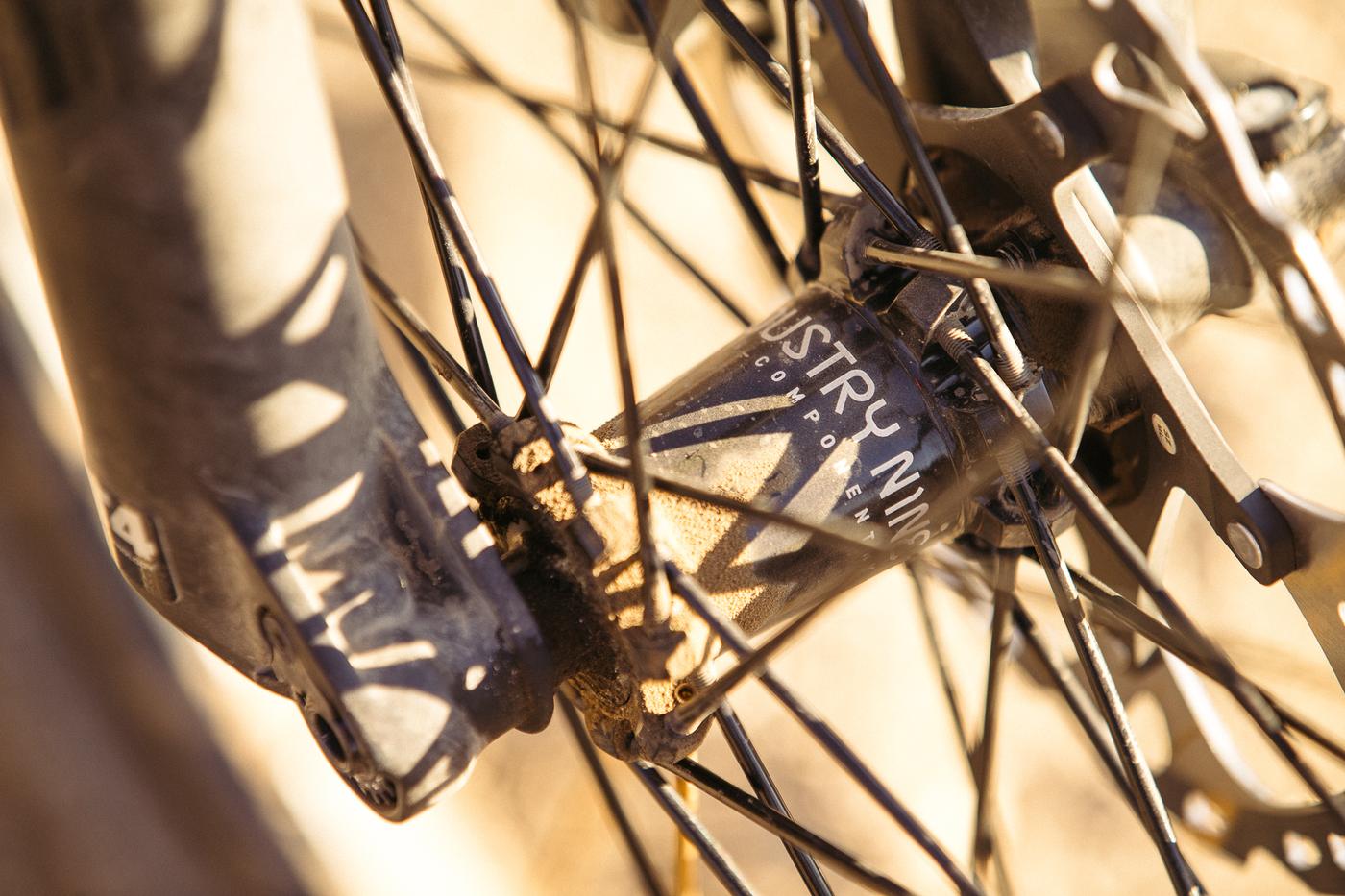 Industry Nine makes incredible wheels. It’s the first time I’ve gotten to ride the Trail 32 wheels, with their specially-designed 3º of engagement. Aside from the dual gold spoke notes and the amazingly loud freehub, these wheels were and continue to be completely solid. I’ve said it in MTB reviews before, I am not the smoothest when it comes to new lines and end up casing rears a lot trying to hop up or over high ledges. After a few serious burbs and casings, I was surprised to find the aluminum rim still remarkably true. 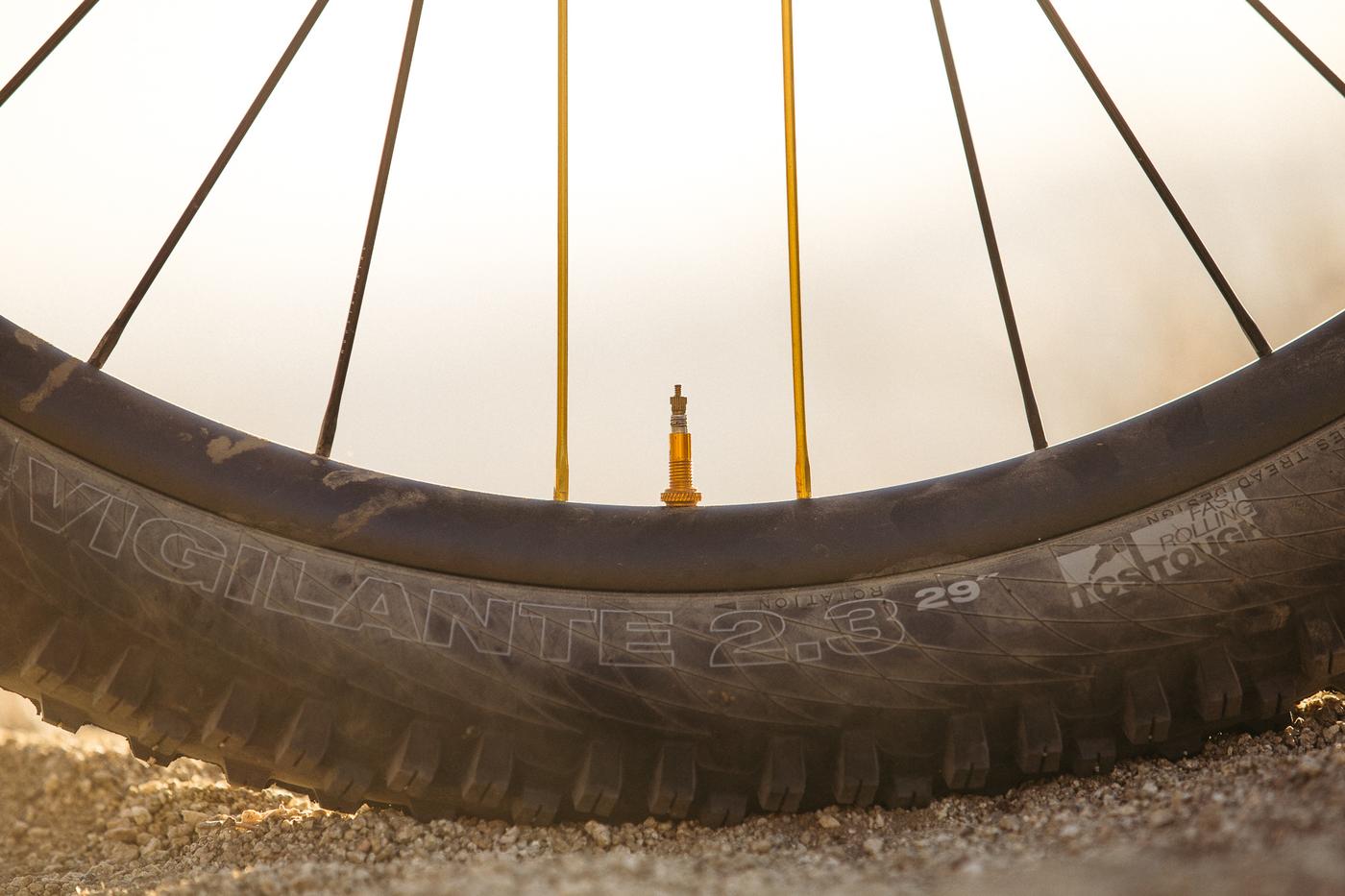 Oh man, I think I found my new favorite tires for SoCal riding. The 2.3″ Vigilante and 2.25″ Trail Boss tires by WTB were perfect for dusty and loose corners. After riding the same trail over and over again, I was able to really push the limits of their hook-up-ability. Durable, easy to setup tubeless and beefy. Done and done. 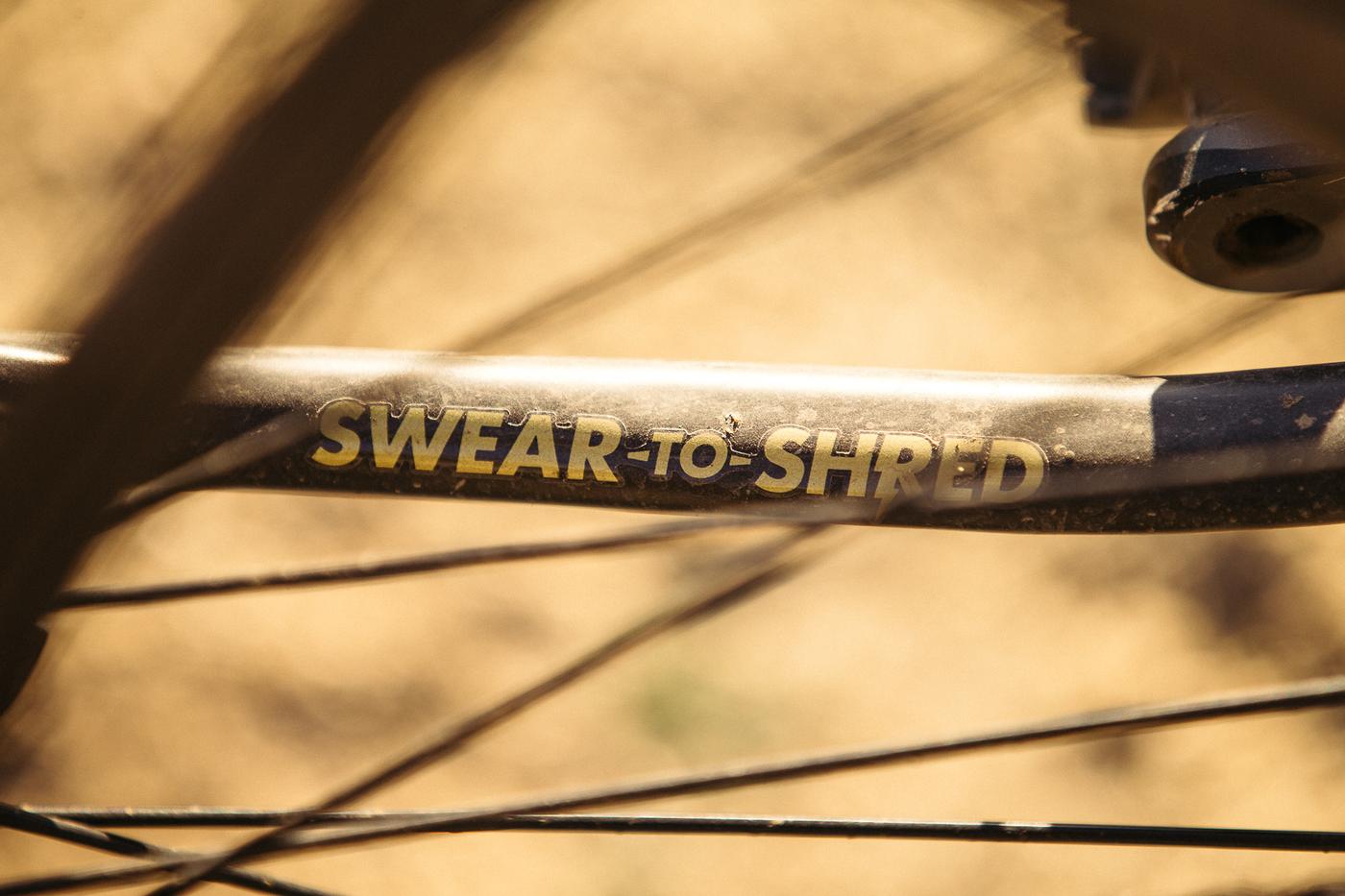 So… another hardtail, with a higher stance, a wicked short rear end and a pretty tricked out build kit. What do I think of it? As I alluded to earlier, it’s a different bike than my Rosko and it’s got me looking at the riding I was doing in Texas, versus the riding I’m currently doing in California. When you’re constantly going up and down and up and down and up and down, I like the front end of the bike to be a little lower than when you’re climbing for an hour or so and descending for half that time.

Here’s why. Climbing is easy. You sit, set your pace and just go. There’s no immediate hurry when it comes to a fireroad climb, unless you’re riding with super fast or fit people. An upright position, at least according to my opinion, feels less than ideal in this particular situation, yet it’s not as important as an immediate weight shift that’s required while riding singletrack with short, punchy climbs. 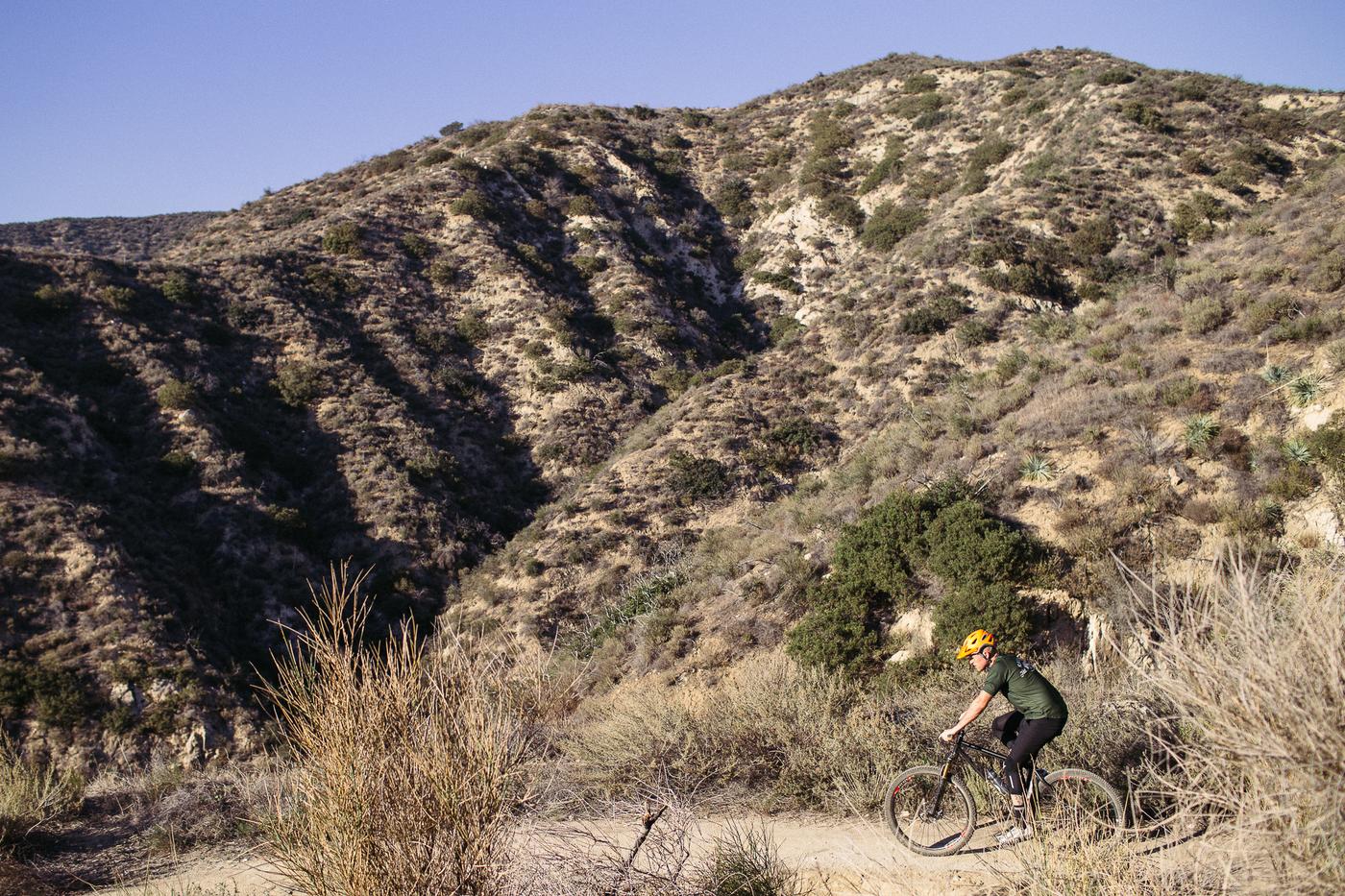 It’d be important to have that ability to get lower in the front on shorter climbs, than it is when you’re just sitting and spinning up a fire road.

@tytanium has been taking this line since I've been riding up in the Angeles National Forest and it wasn't until today that it felt natural.

Then, once you start cooking downhill, a higher front end gives you even more room to move around on the bike, or to move the bike under you. Hopping is easier, snapping corners is easier and when it comes to the realllllly steep sections, you can still feel confident hitting drops and ledges without feeling like you’re going to get bucked. 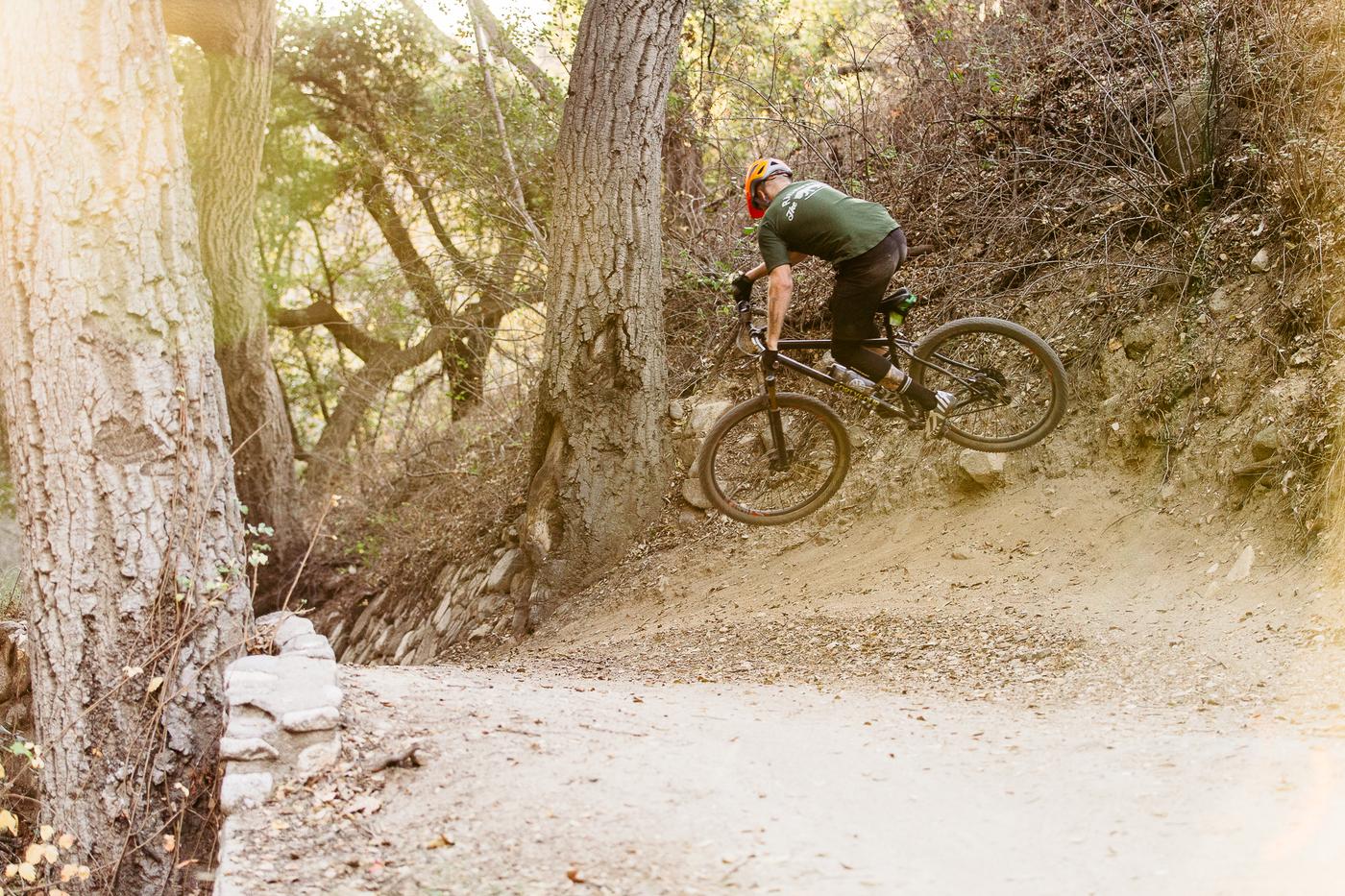 It’s splitting hairs and it’s all preferential but that’s why understanding what kind of riding you enjoy is so important when getting a custom bike. Kris has a pretty good idea of how he wants a hardtail to ride and it doesn’t include the word “racing.” Unless you want it to.

When you swear to shred, you embrace the buck-wild nature of pushing yourself, your equipment and your bike frame. The 44 Bikes Marauder was a great vehicle to explore all of those pieces of the equation. Now I just have to decide on whether or not I want to buy this bike from Kris, or send it back!