You ever have a bike that was super rad, but you just didn’t ride it? My Velo Orange Polyvalent was that bike for the past few years. Beautiful, capable, and yet, neglected. This past winter, during a bout of organization, I wondered about this bike that sparked joy aesthetically but didn’t really get ridden. What’s the point in keeping something around that doesn’t get used? I committed to riding it to work for a week to see if I could get at that very question – and I ended up riding it daily for the next four months. 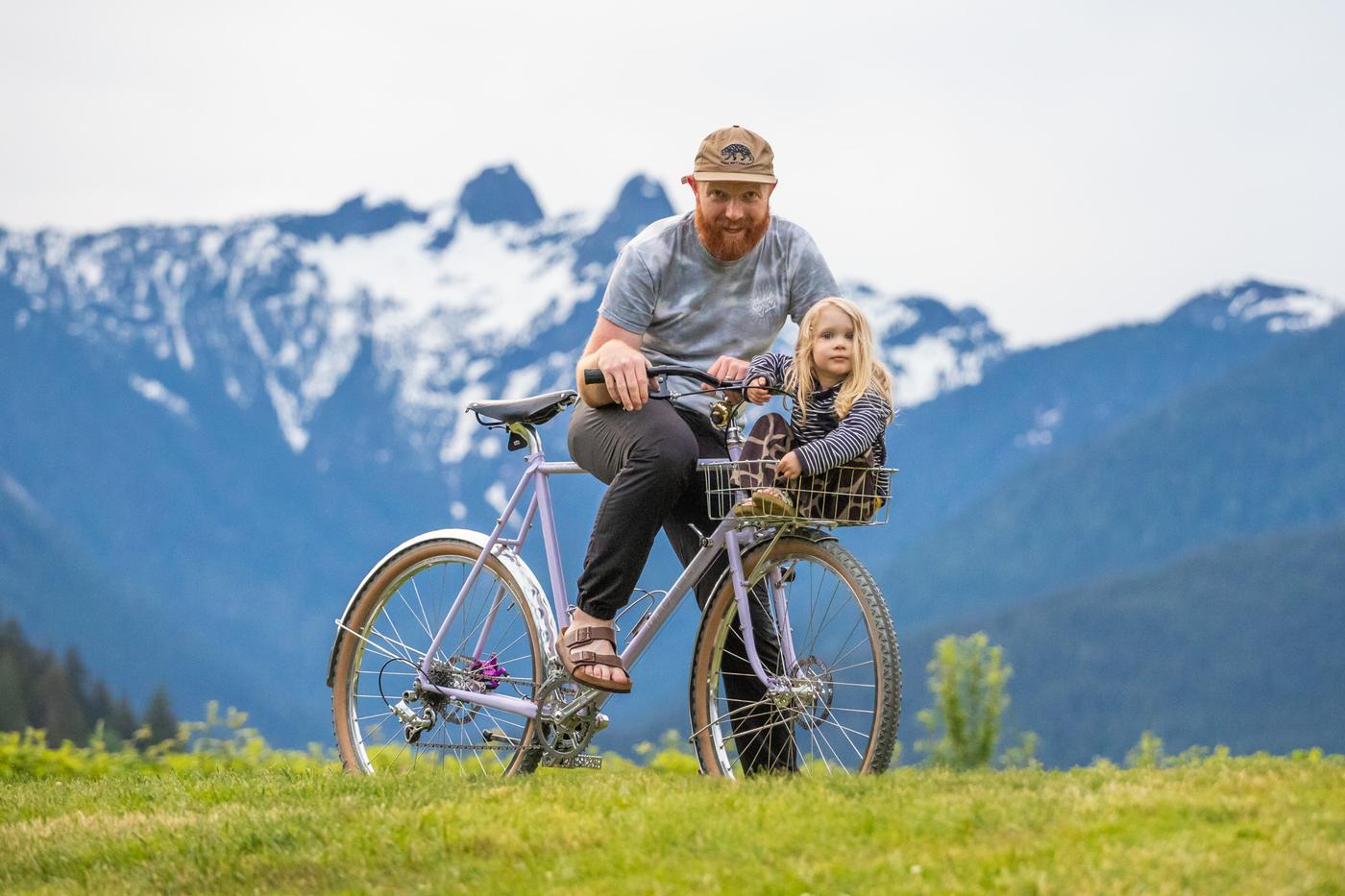 I published my original review of this bike – the Polyvalent V4 – in March of 2019. Since then, VO has introduced two new models that supersede this frameset – the Low Kicker step through and the Polyvalent V5 “diamond” – which maintain the same geo numbers but add through axles, 1-1/8″ threadless steerers, and slightly taller head tubes in each size.

In that review I placed the Polyvalent among bikes I’ve enjoyed in the steel adventure bike category – the Soma Wolverine, Kona Rove, and Surly Midnight Special – but in that category it stands out with unique handling characteristics due to its low trail steering geometry. You’ll know from reading my recent in-depth review of Chip’s custom Wake Robin rando bike that I’m a fan of the way these bikes handle, particularly with a front load or a basket. 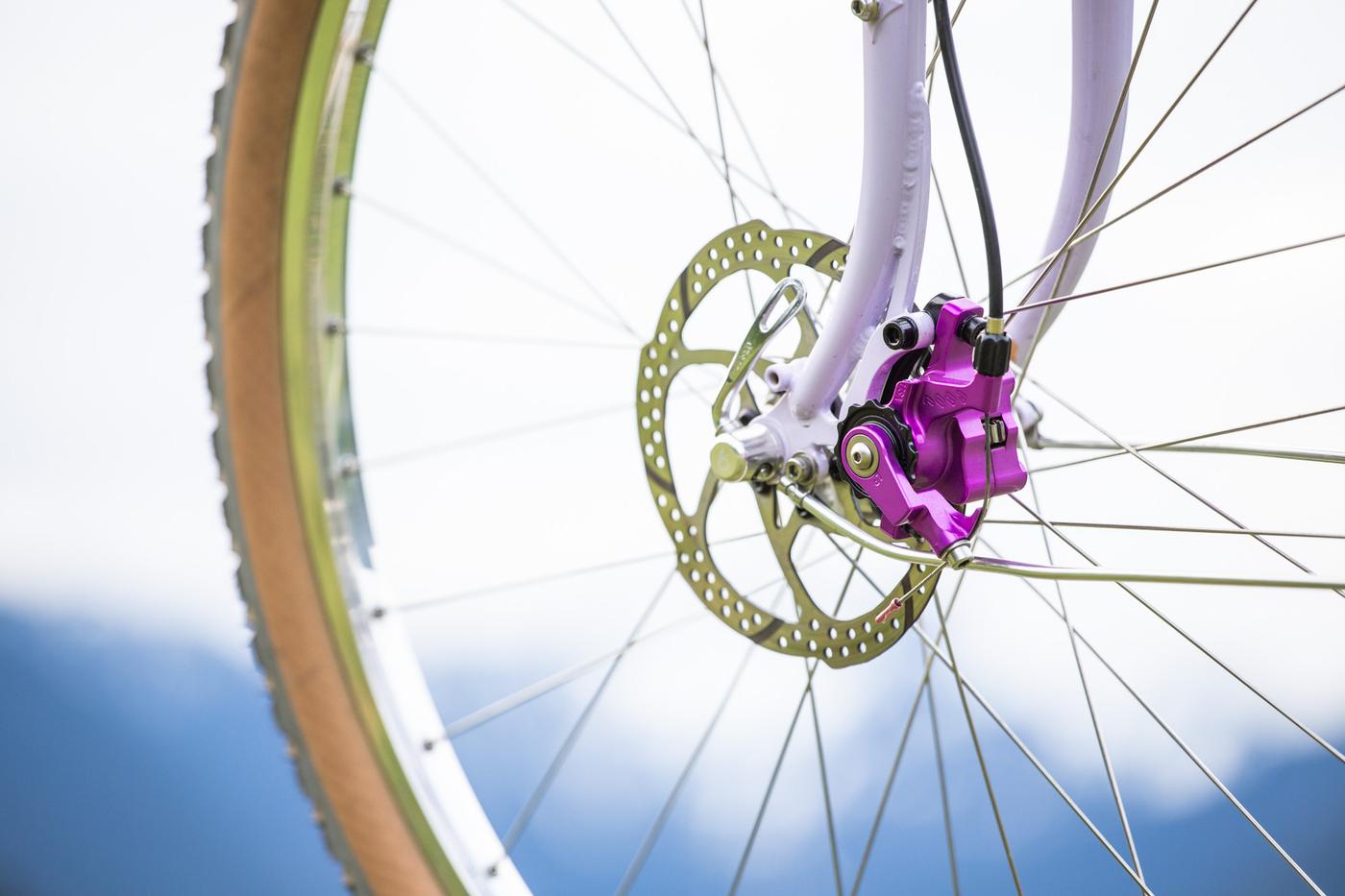 Something To Be Desired

I really enjoyed the Polyvalent’s handling but, as a drop bar build, wanted it to be more sprightly and quicker accelerating. I concluded the review thinking it would be fun to try a flat or swept bar, and wishing I’d had downtube shifters on the bike to facilitate easier bar swaps. I worked out a deal with Velo Orange to buy the bike, but despite my fondness for its handling and the build’s head-turning aesthetics, it ended up being hung up for most of the past two years.

Late last year I wrote a long-overdue story about one of the most beloved bikes in my collection – the humble Kona Unit, with a build honed over the years, and which was my primary “do anything” bike as long as I didn’t care about speed. That bike is all about comfort, with amazing confidence and capability off-road. It became my default bike mostly because it had both flat pedals and great fenders, and lots of capacity for towing our Tout Terrain Singletrailer or generally carrying stuff around. 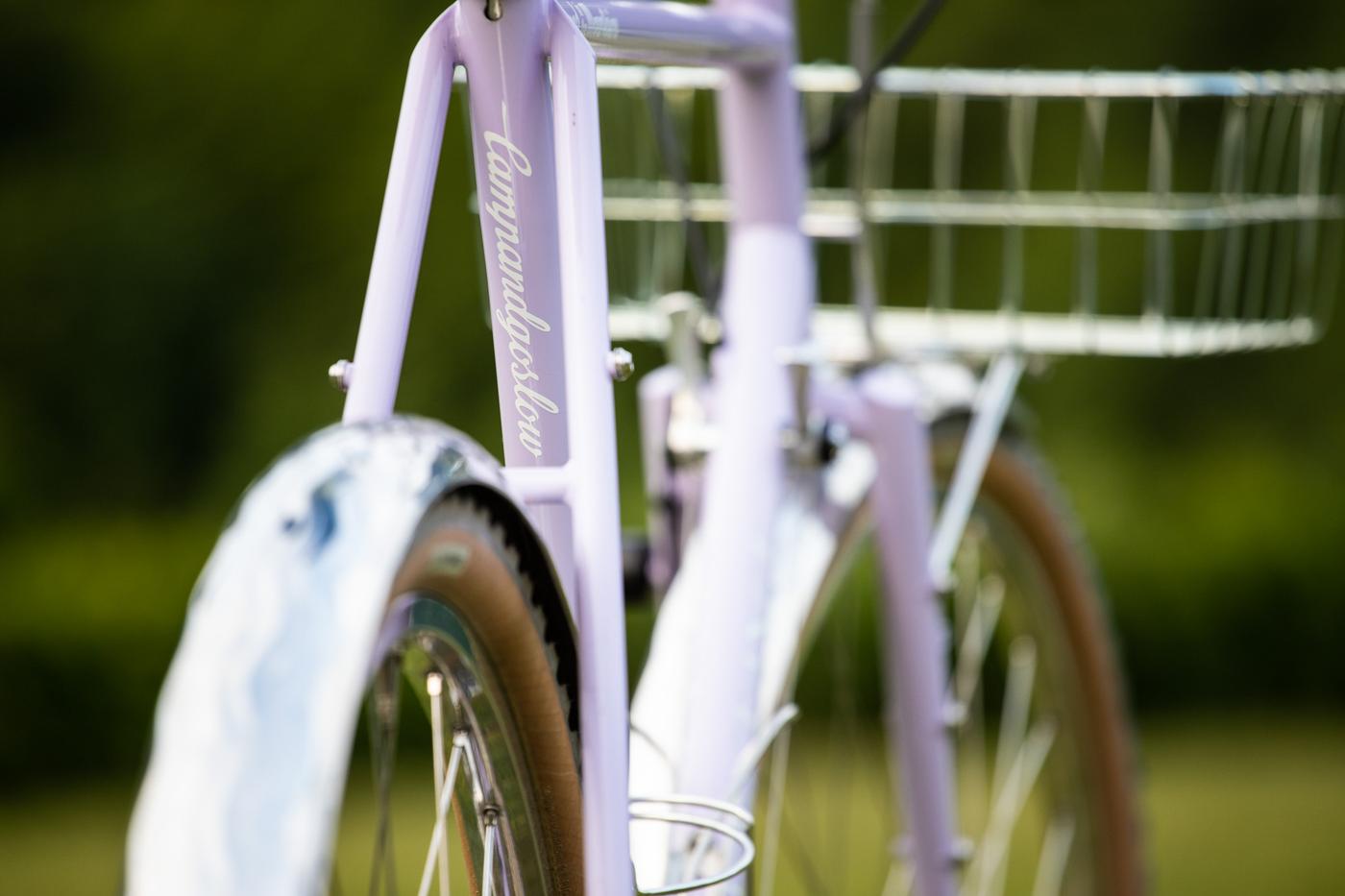 I pulled the Polyvalent off the hook shortly after publishing that story on the Unit. The premise of that story was about how I almost sold that bike, but was sure glad I didn’t. I guess my brain felt more relaxed having those thoughts down on paper and needed to go through the process with the Poly. Perhaps coming back to the it after the Wake Robin review is what truly sparked the curiosity about this low trail disc bike finding its niche in my collection.

Immediately I was reminded how much attention this bike garners both from bike enthusiasts and average humans. People lean out of car windows and talk to me at crosswalks to tell me they love my bike. The lilac paint and silver build kit are so far from the norm that lots of folks think it’s a vintage bike, which makes sense as that’s exactly the niche that Velo Orange occupies. It’s fun to have a bike that elicits a reaction beyond bike nerdery. 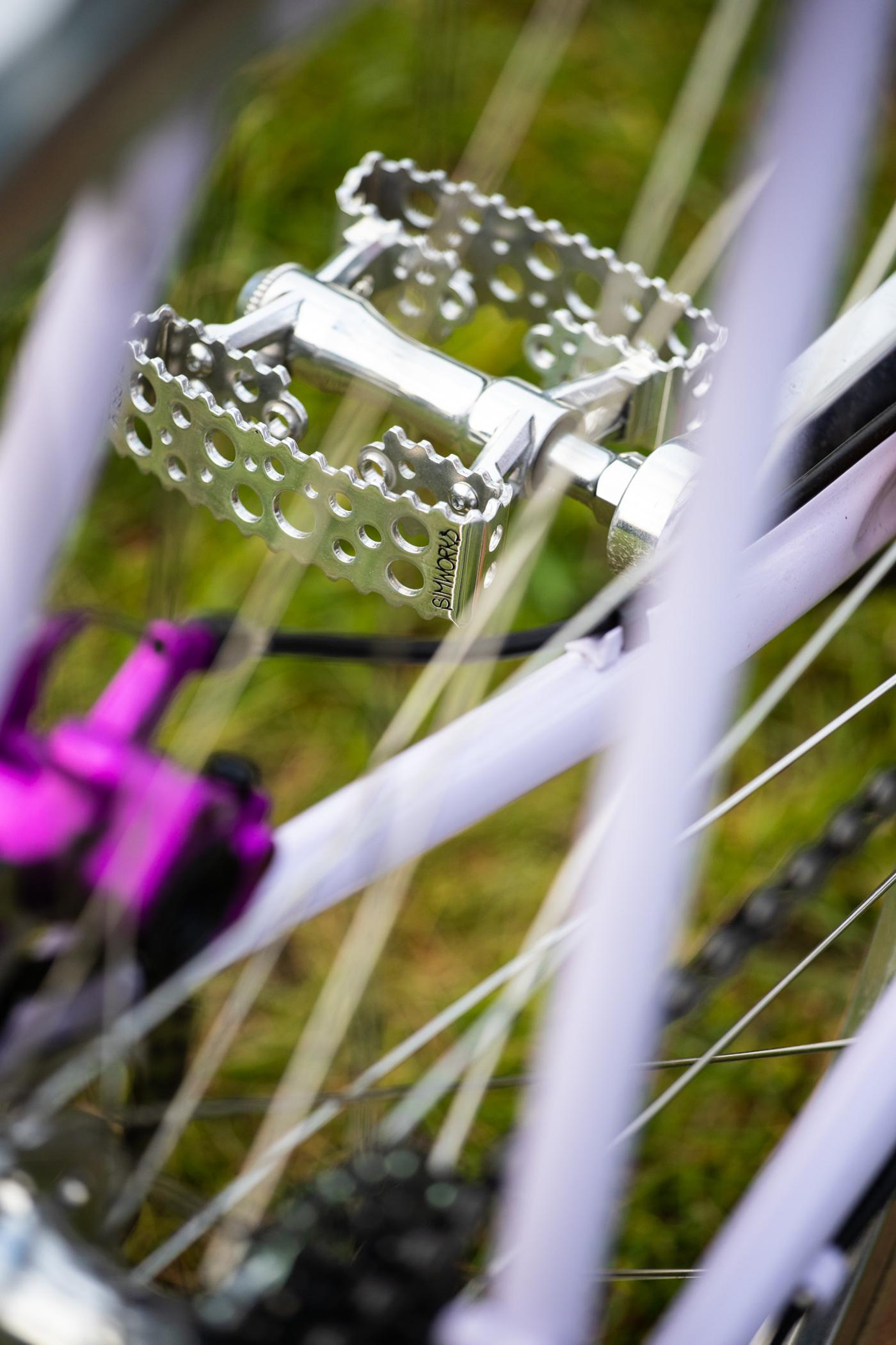 After that first week of commuting I was seeing new potential. The Polyvalent’s anti-trend 72º seat angle suits my saddle setback needs nicely, and it was definitely faster than the Unit at similar effort levels. But, I’d never really been down with the TRP Spyre brakes, and the drop bars still weren’t doing it either. With nothing left to lose I disconnected the shift cables and pulled the bars and Campy shift levers off.

I’d borrowed a set of 7-speed Shimano downtube shifters from a friend’s bin with this project in mind back in 2019 (thank you Gari!) so those went on and fortuitously turned out to pull enough cable in friction mode for the Campy 11 derailleur. I started with silver Soma Dream bars and, funnily enough, the purple Klampers that were meant to go on Stephanie’s Wednesday. Whoops.

Now, I know what you’re thinking: those friction shifters look a long way down. And they are. To be honest, the shifting is fine, but it’s obviously a bit slow and not always precise like well-tuned indexed setups can be. I do all the shifting with my right hand, pulling a front shift if necessary before choosing a gear in the back. I don’t shift as often as I would with a more accessible and more precise shifter, but I think that’s totally fine. 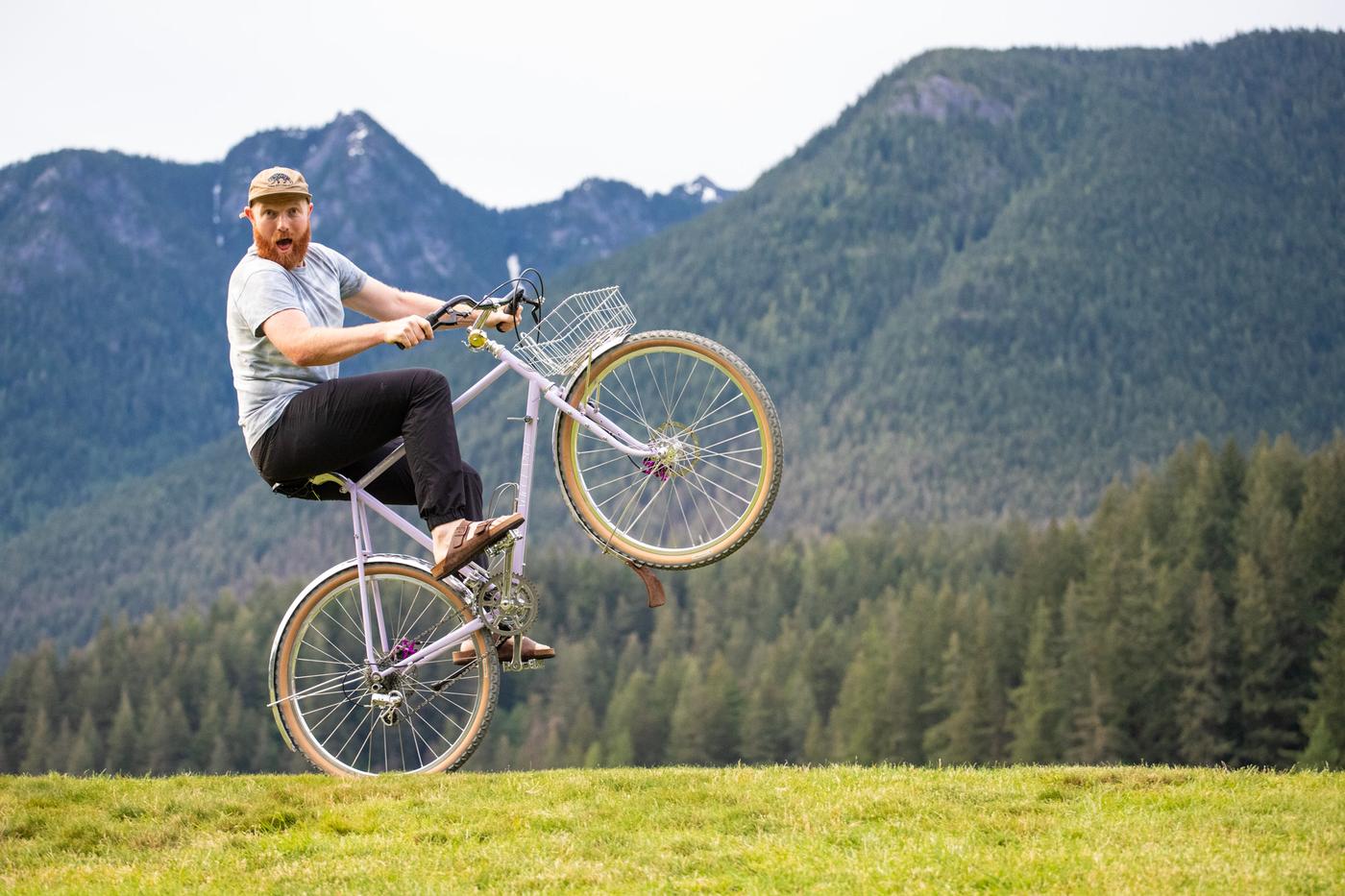 I Love Back Wheel

Funny how a bar swap can completely change a bike for the better. A flat bar brought about exactly the chillness the bike needed. The next week went by and I found out just how much this bike likes to wheelie. The 72º seat angle is coincidentally the same as my Pugsley, which also loves back wheel, so it’s no surprise. (The Pugsley is now being ridden by our 11-year-old nephew, who shot the riding photos in this gallery.)

After riding the Dream bar for a bit, I wanted to try something with a bit more sweep. The Sycip JJJ bar you see here came with the 44 Bikes Ute when I bought it from John, and we’d tried it on a couple bikes but always found the grip area to be just a bit short to get the brake levers in the right place.

Don’t try this at home, but, these Race Face Getta grips have a sturdy inner sleeve and an inboard clamp, so I mounted them with 15mm hanging off the end of the bar. The built-in end cap hides any evidence! These are the 33mm diameter, which I’ve found super comfy for this application, though I prefer their 30mm for trail riding – my hands get sore riding singletrack with thicker grips. 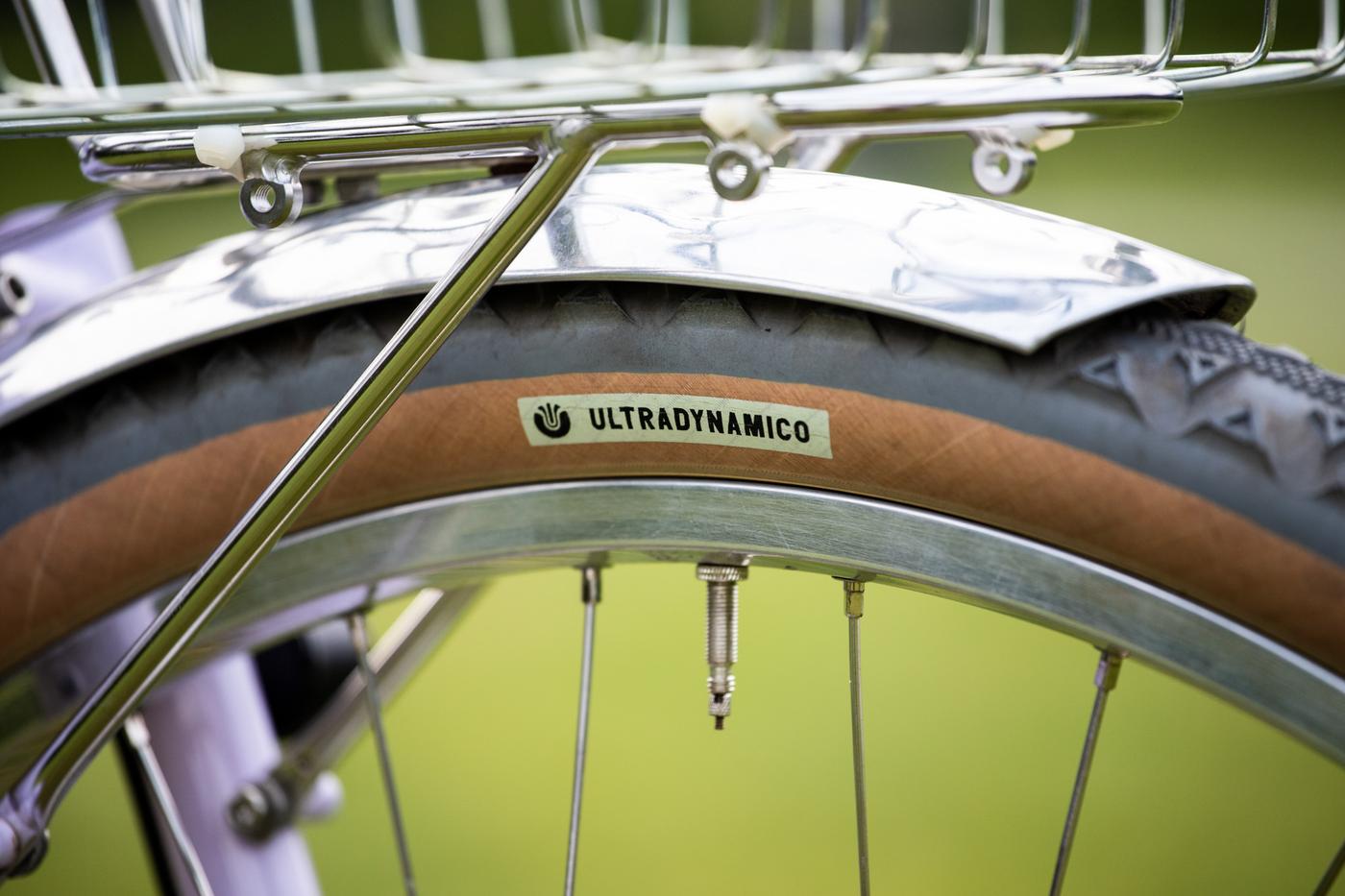 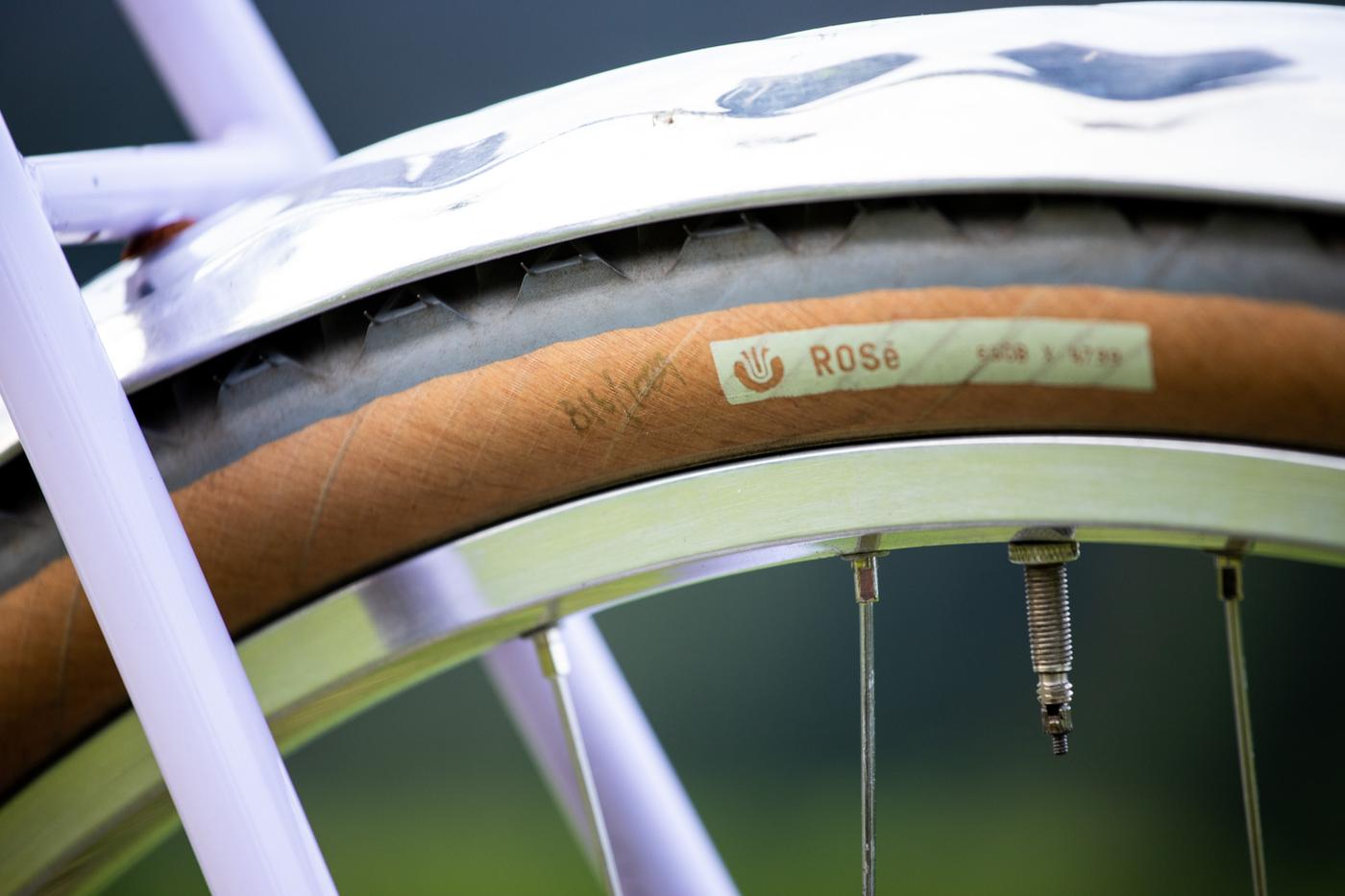 The coup de grace on this build is the Ultradynamico tires. At first Jason lent me the tires off his Hillborne, not even having been cleaned after months of use with rim brakes. I’m a big fan of try-before-you-buy and my own parts bin is a gear library for friends, so I was willing to look past the seasoned sidewalls to get some first hand experience with the dynamic casings and treads.

Jason lent me a Rosé / Cava combo, and I really liked them! While I was leaning toward the Cava more than the Rosé for this bike, he also happened upon another friend selling the barely-used set you see here. Jason, like me, has a problem with buying stuff he doesn’t yet know if he has a home for merely because he knows it deserves a good home. And for whatever reason he offered these unseasoned tires to me. I think you’ll agree he made the right choice. <3

Jason also lent me these Sim Works Bubbly pedals – which he received as part of a trade deal, but still isn’t sure they’re his to sell. The extra-long platform is nice under big feet, yet they don’t protrude from the crank as far as my long time favourite Chromag Scarabs. It’s a neat shape. I will note that they aren’t the grippiest pedals – I don’t like riding them in my Blundstones which happen to be my usual commuting footwear. The polished silver is perfect, though, and they have decent grip under softer shoes which I wear more in summer. 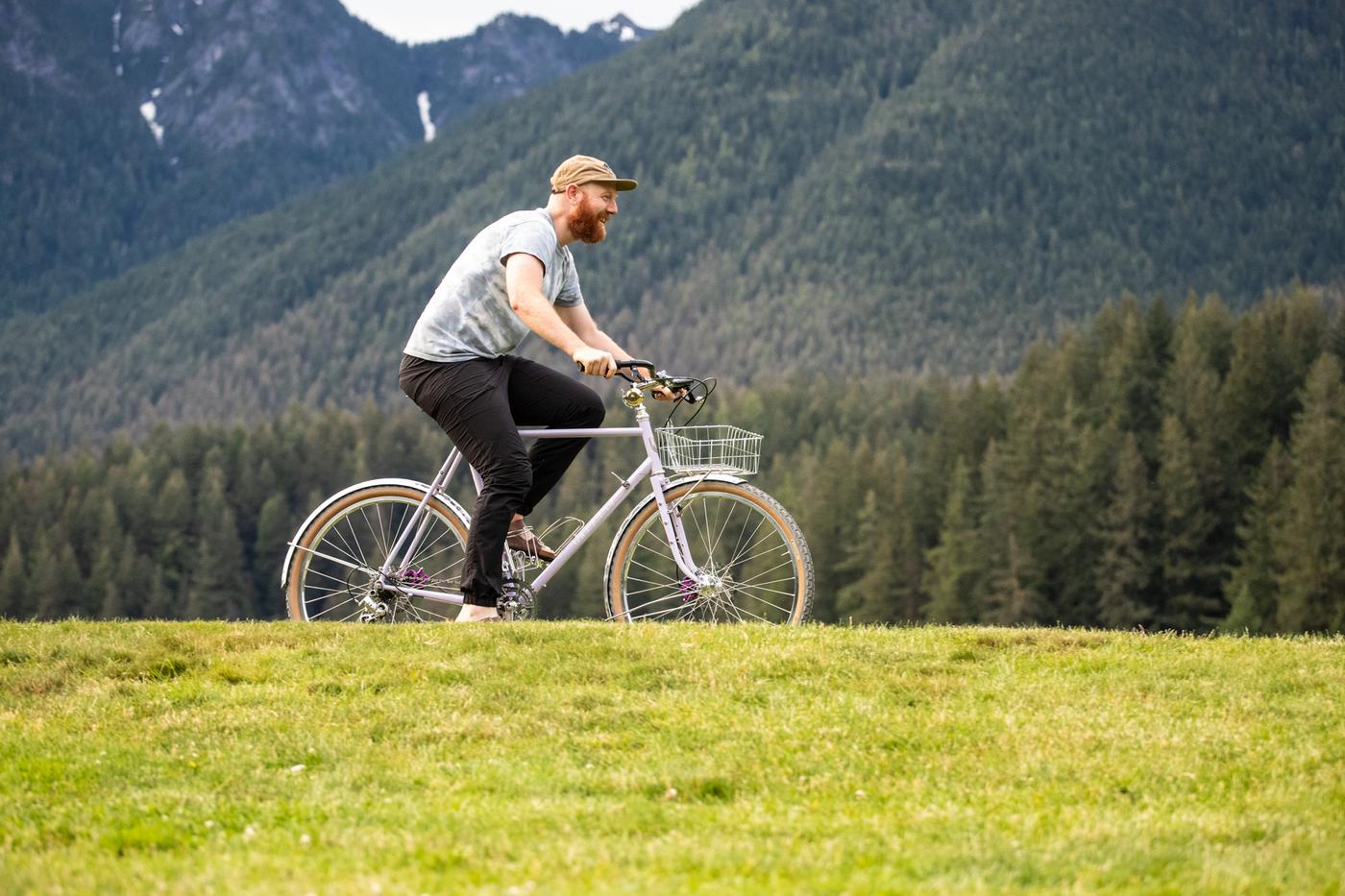 Moving forward I’ll probably end up on a different drivetrain, not because the friction downtube setup is tedious (even though it is), but because I feel bad daily driving such expensive-to-maintain Italian wear items. I’m in the process of upgrading all our bikes to 9-speed anyway.

Stephanie told me these brakes should stay on this bike, as the colour is too good a match. The “Wait. Are those my brakes again?!” joke has become actually funny to us, and in the meantime, Stephanie’s Wednesday is moving in a more trail-focused direction, and will be better suited to hydraulic brakes anyway. 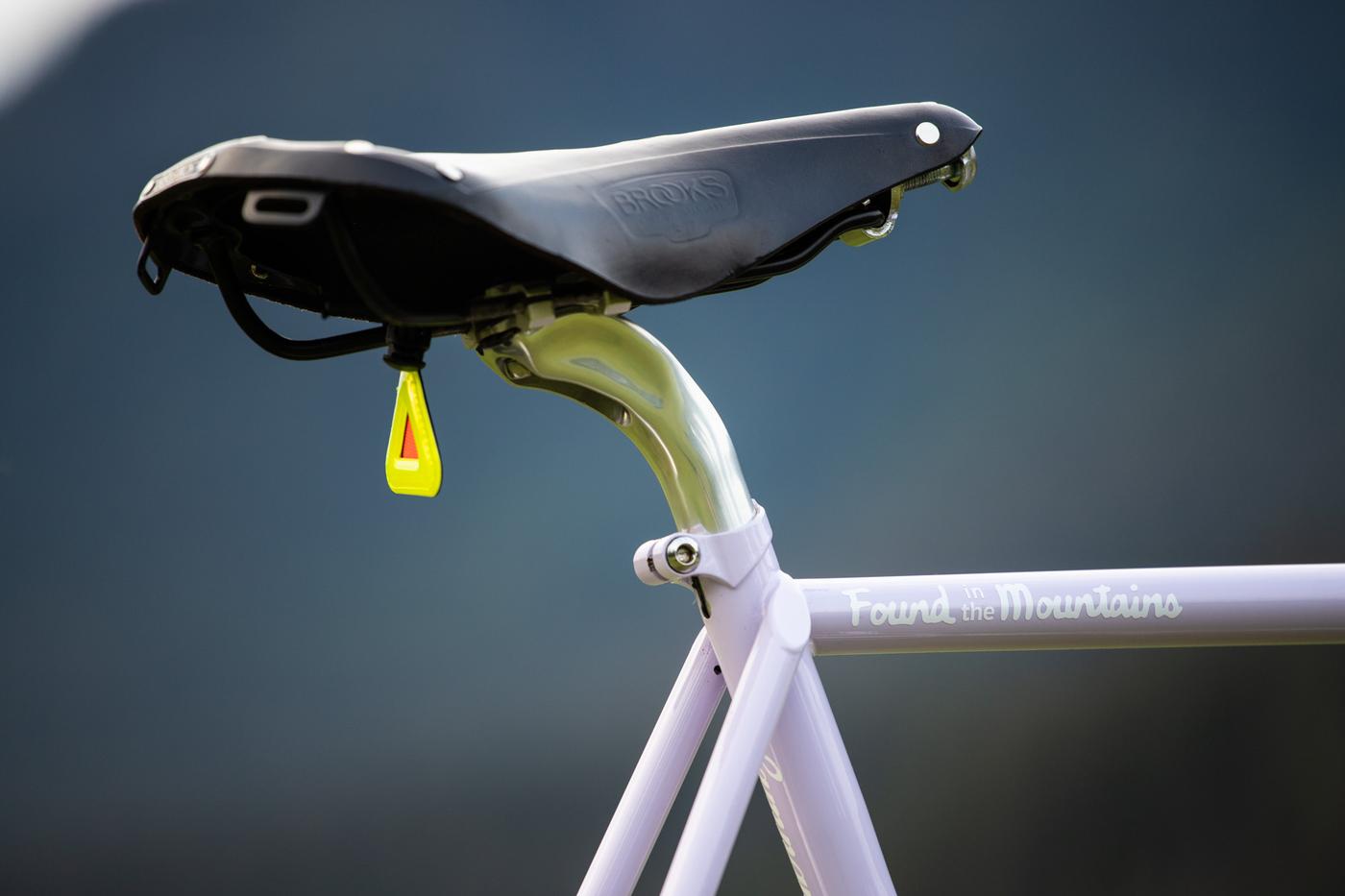 When I first built this bike the goal was to use all the silver, and it makes a striking impression which I absolutely love. I’d certainly prefer a silver bar, but in a daily-use context the colour of parts becomes less important than their function. This is exactly how the boring-yet-functional original kickstand from our Big Easy found its way onto the bike. Fit and function beat aesthetics but when you can have all three, dang it can be good.

If I were to dream big dreams, the fact that this frame fits 26×2.1″ tires with fenders and 2.3s without has big appeal. Of course, I’d want to keep polished silver rims but could upgrade to tubeless and maybe run something like a 2.1 Panaracer Gravel King under a wider fender. That said, there’s absolutely nothing wrong with the rim/tire/tube/fender setup here. I don’t really upgrade just for the sake of upgrading so who knows if that will ever happen. 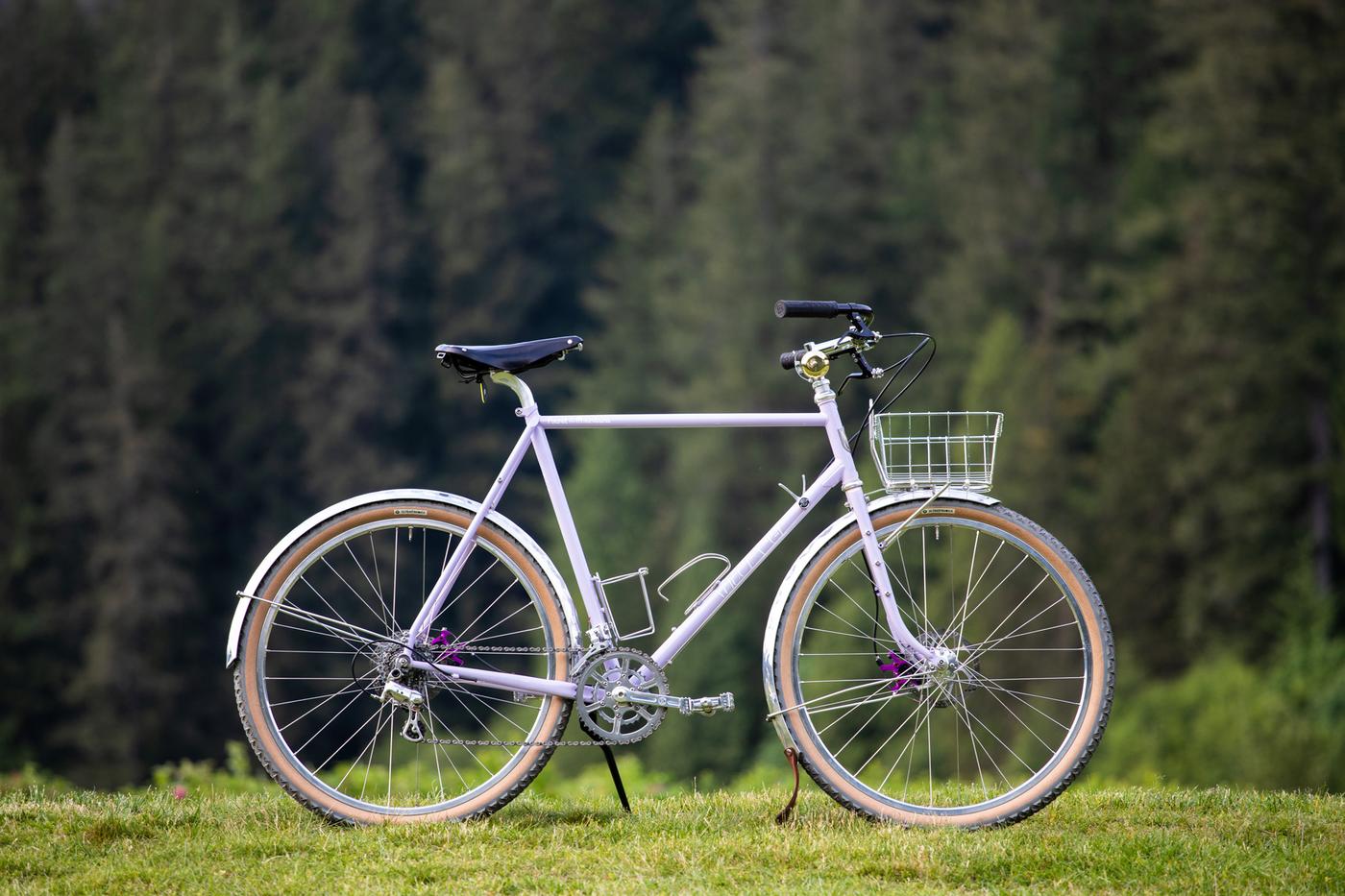 I’ve now spent four months riding the Poly as my daily commuter. I’ve put over 1200 km on the bike in that time, when it had surely been ridden less than that in its previous 2.5 years of existence. So there ya go, a happy ending. Poly got saved from the chopping block, and is once again being loved by random people on the street and everywhere it goes – but also by me.

Like most things in the bike world this year, VO’s frame runs have been selling out quickly. They have a handful of XLs (which mine is) in each version at the time of writing, and are expecting another run of both frames in September. Of course, your favourite VO dealer might well have a frame of your size in stock, and could definitely secure one for you from that upcoming run.