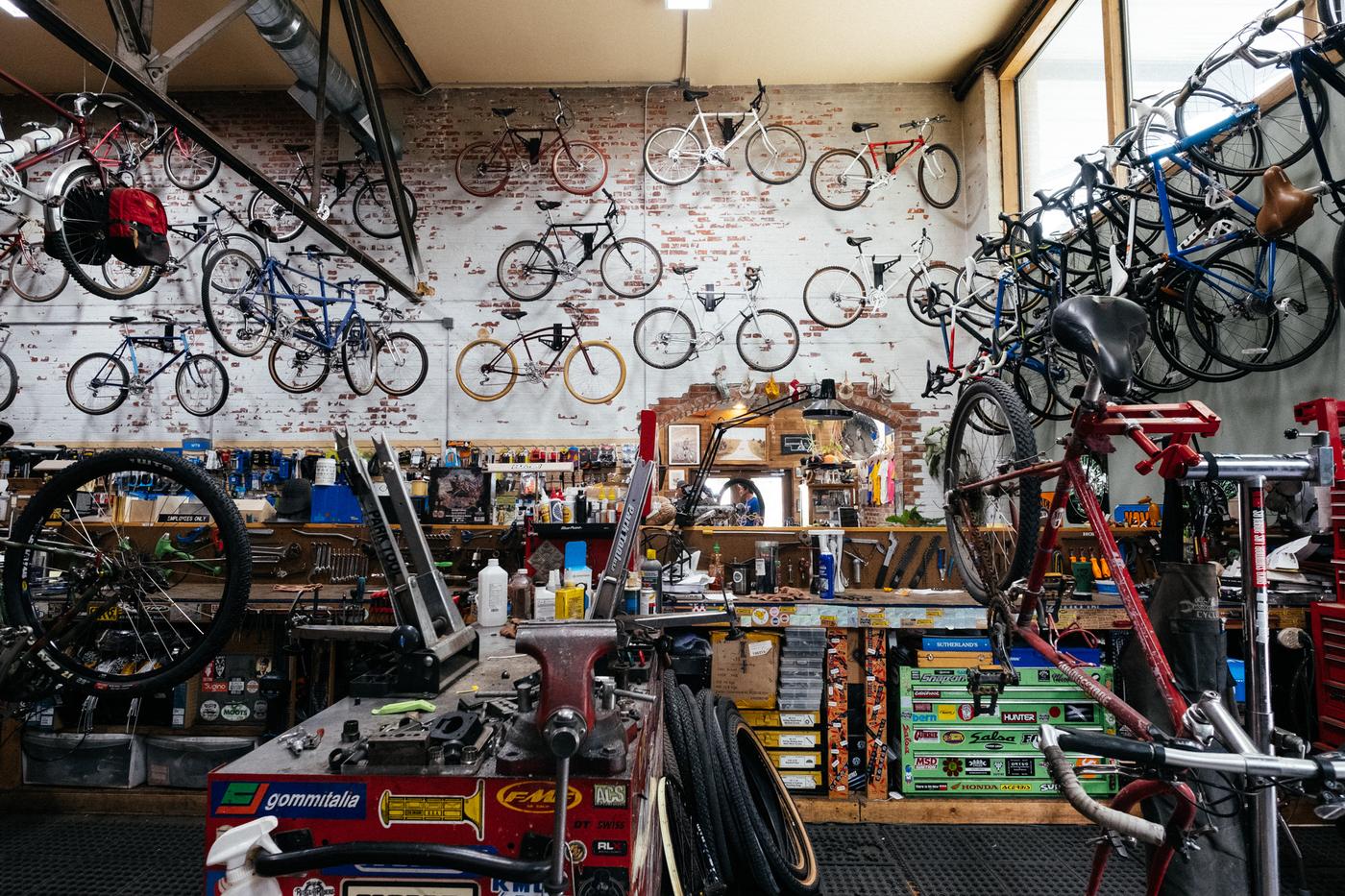 When you first walk into MWC you are in their showroom, packed full of the hand-painted signs, cycling memorabilia from all disciplines of cycling, tons of Monkey Wrench’s own gear, and all of the coolest cycling stuff you’ve only seen on the internet. This would be enough to get anyone excited, but this side pales in comparison to the service area and bike museum!!! 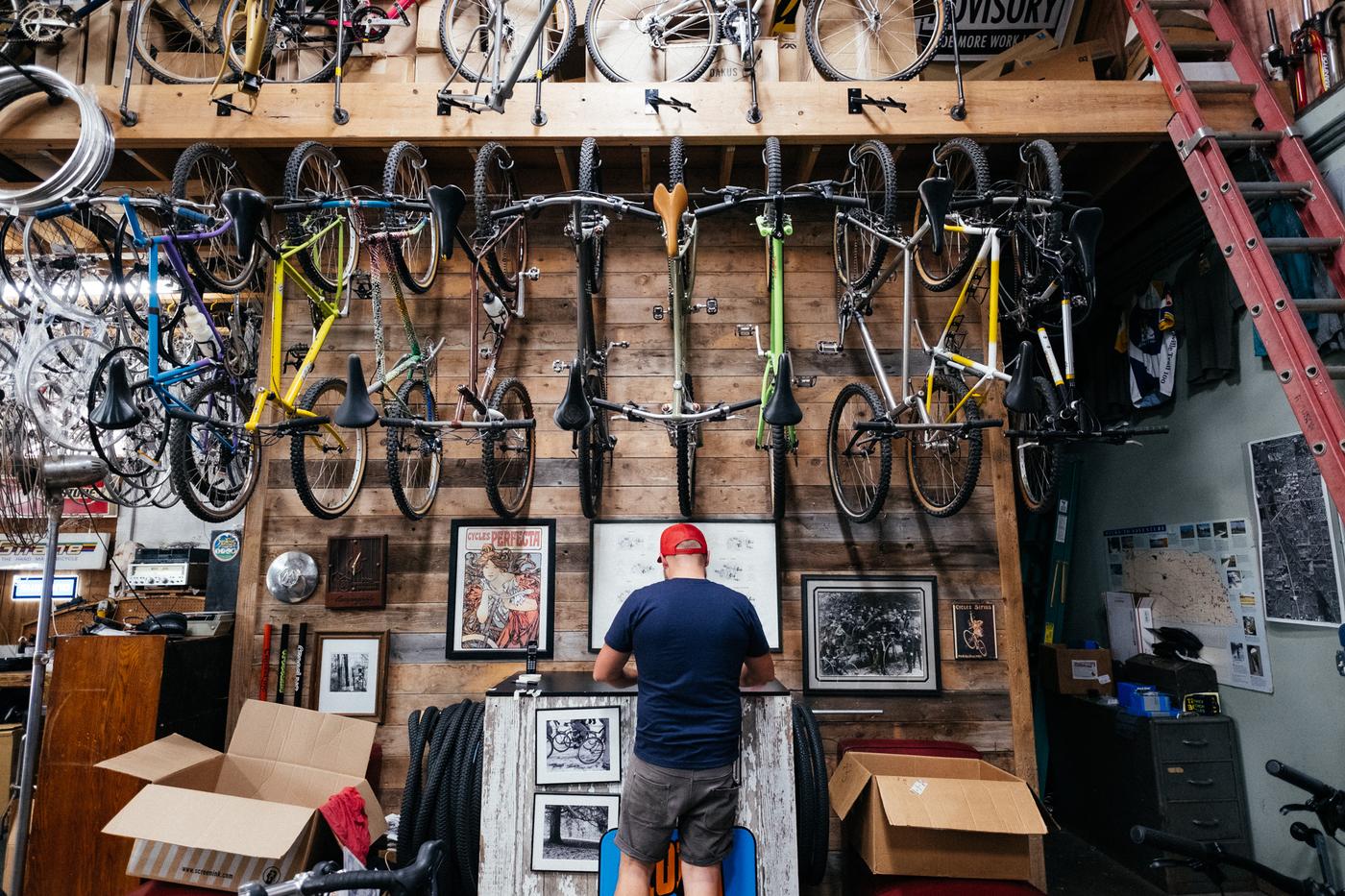 Yep, you heard me right, there is a straight up vintage bike museum in Monkey Wrench Cycles!!! This is something no one ever really talked about when telling me stories of MWC and this is just crazy because their collection of vintage mountain bikes even rivals the Marin Museum of Bicycling‘s collection. So this got me thinking, if no one is mentioning this amazing aspect of this bike shop in the Midwest, the people and the service this bike shop provides, must just be out of this world, because you don’t just overlook these bicycles on the wall unless there are true bicycle messiahs down below the heavens above. 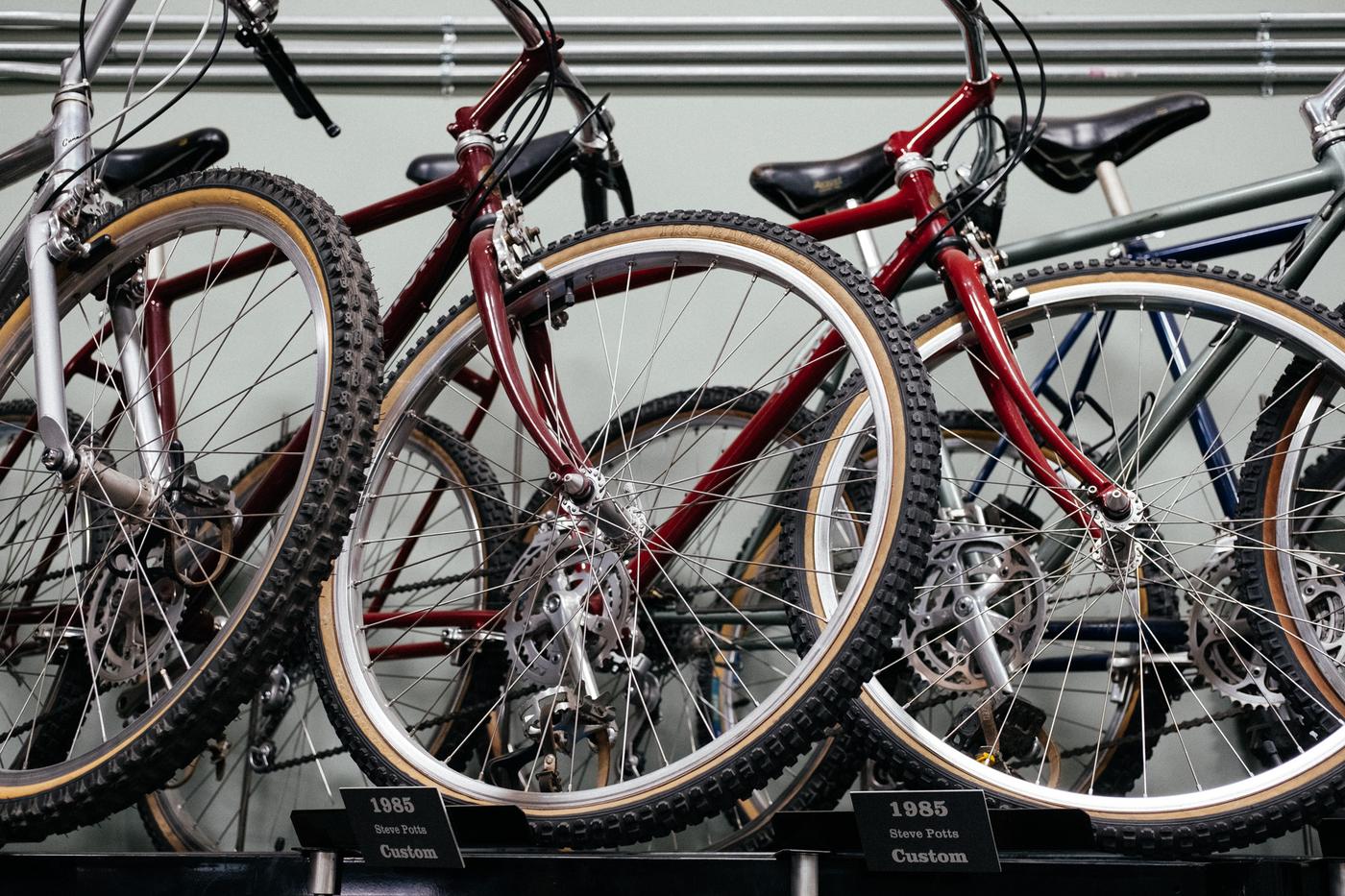 As I turned my camera to the service areas, each area was becoming a novella, painting a picture once again of Nate, Eric, and Carl, the three amigos of Monkey Wrench Cycles and this when I realized why no one was talking about the bike museum. Each workspace was dripping with the individuals’ personality, sense of humor, and even fetishes. There was everything from Star Wars memorabilia, to old hood ornaments floating around. But the three things that seemed to really unite all of the workspaces was they all looked used, well loved, and the tools of choice were Snap-On. 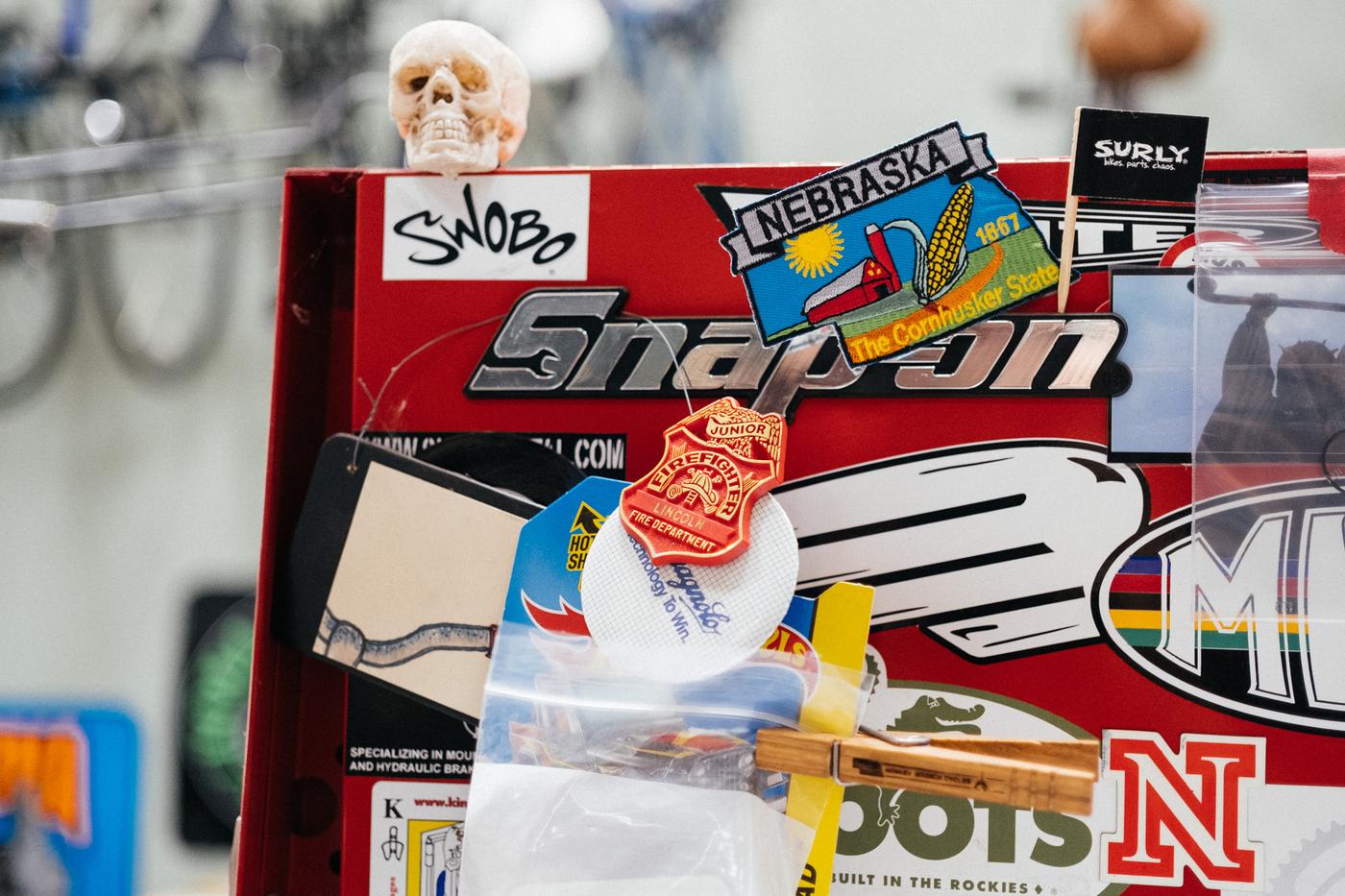 I don’t think I’ve ever seen this amount of Snap-On in a bike shop ever! Growing up with a father who loved working on anything with a motor, I became very familiar with Snap-On and their high-quality tools, but I can’t actually remember owning any because of the cost. By no means am I saying that the boys at MWC are rich, because I own a successful bike shop, and I know those boys aren’t rich, because you most definitely don’t get rich owning small independent bike shops, but what you do get to be is rad and I can’t think of a radder shop than Monkey Wrench Cycles! 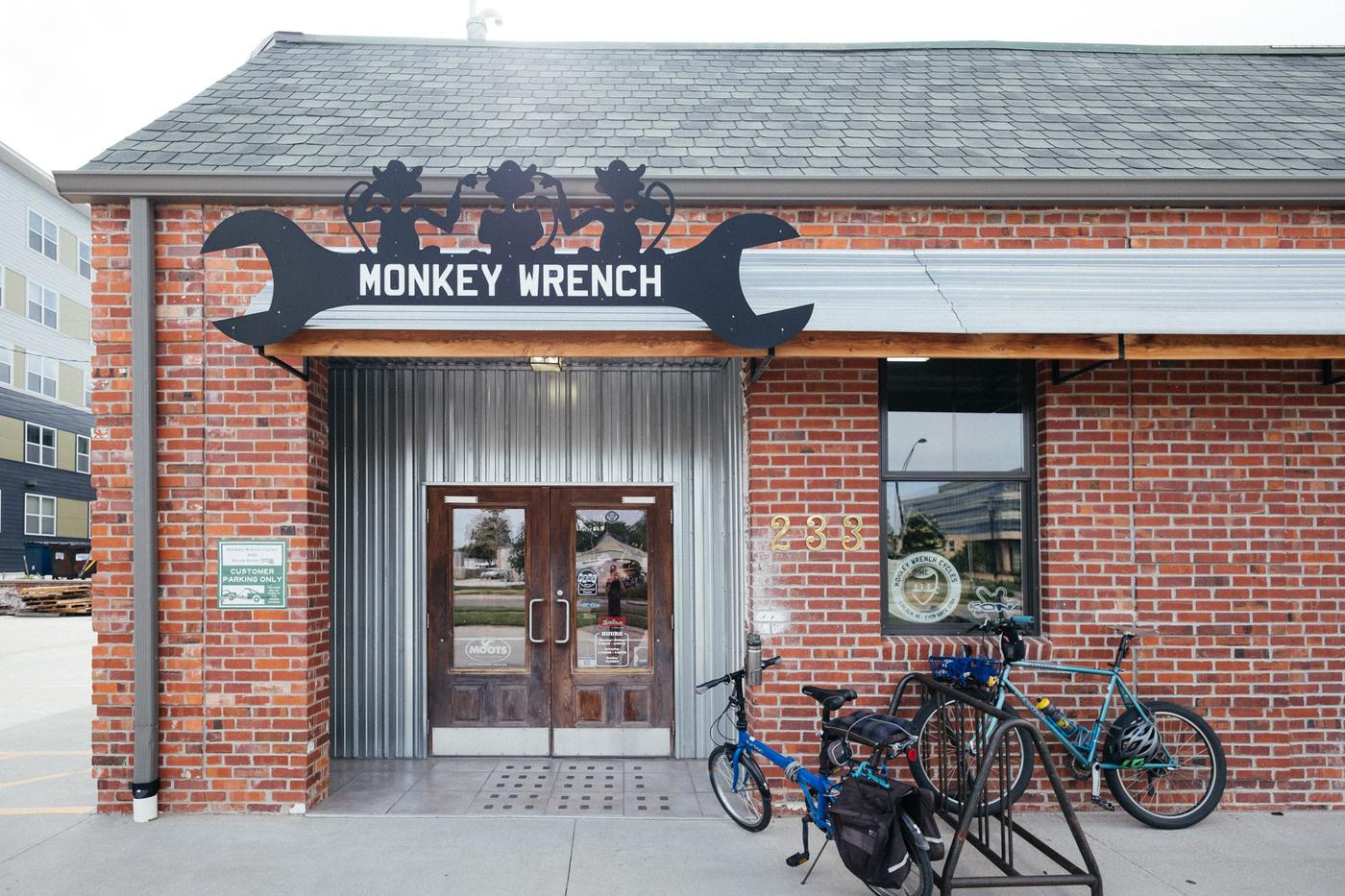 I really hope to make it back to Nebraska to better document the bicycles museum and do some touring around the wonderful state of Nebraska with both the MWC boys and Vince from Ponderosa Cyclery + Tour, but until then, check out these photos out and let your mind be blown!