The Philly Bike Expo brings together folks from all over the country each year, many of whom have transformed the event into a gathering of some of the finest frame builders in the world. I’ve made a lot of friends over the years attending the show and documenting these awesome builders. While at the show in Philly, I often approach it with a mission in the back of my mind to bring good friends back to Johnstown, PA where I live. It’s a place that desperately needs more cycling culture.

A couple of years ago I did just that and, with fingers crossed, I sprung this question on Megan Dean of Moth Attack: “This bike is unreal, it’s truly a work of art, have you ever thought about teaching a frame-building class?” I think Megan said something like “Funny you should say that… I actually have been.” I responded by telling her that I have a friend in town with a special spot we could use called Center For Metal Arts. It’s filled with light, a fire, and the glow of forged metals most days of the week. Not familiar with CMA? No problem, read on. In 2016 I was covering the event for the first time, and I was fortunate to meet Megan Dean, a frame builder, whose work enamored me for years. A few bike expos came and went and in 2019 SRAM stepped in to bring some fresh faces to the space that for years was lacking. SRAM’s inclusivity scholarship was the first of its kind. The freshman class was filled with some amazing builders, including Danielle Schön, Julie-Ann Pedlino, Jackie Mautner, and of course, Megan Dean. She has a penchant for building things the hard way. She wanted a dual suspension bike but instead of buying one, she decided to fabricate one and even braze the suspension linkage. 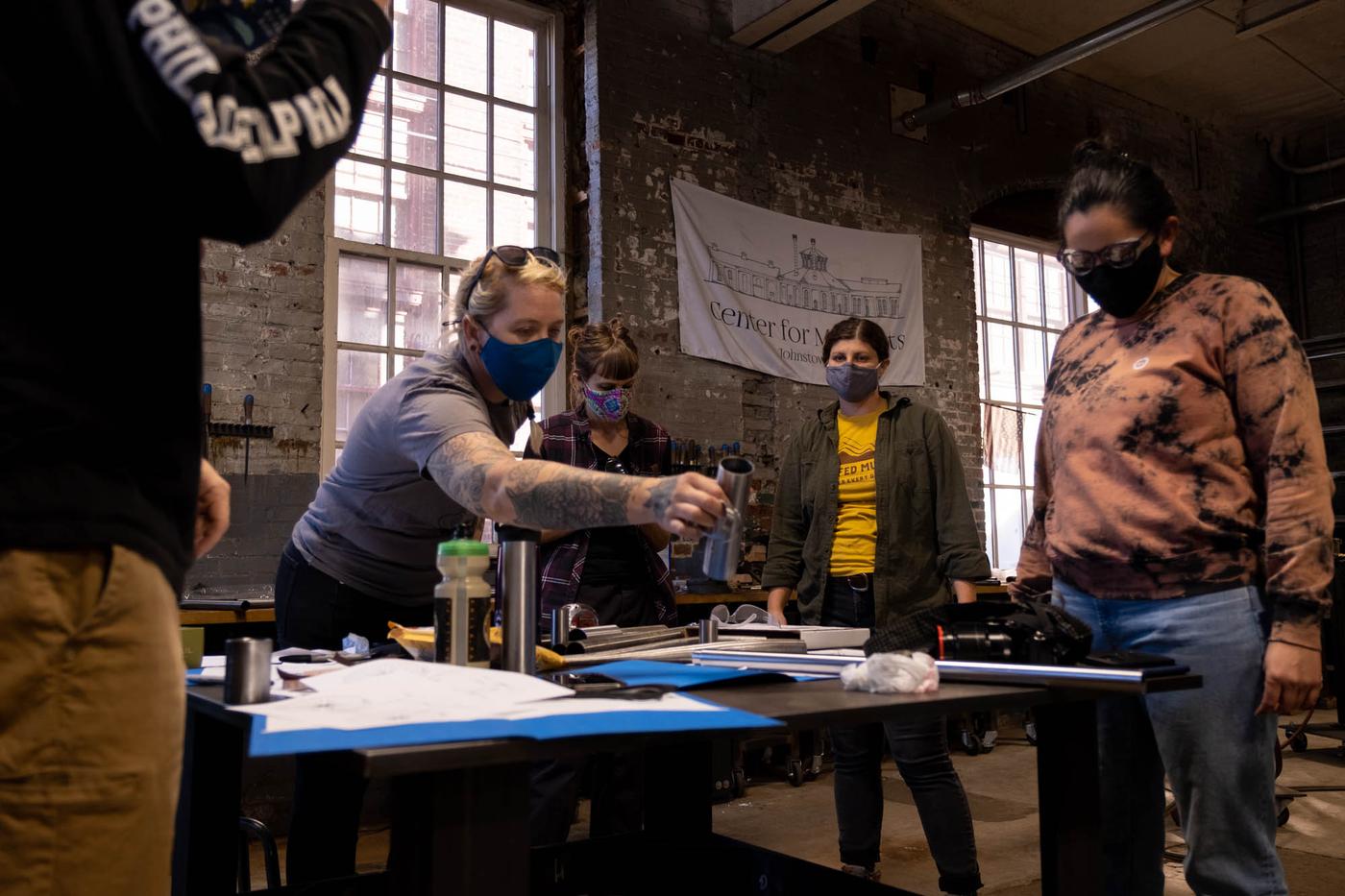 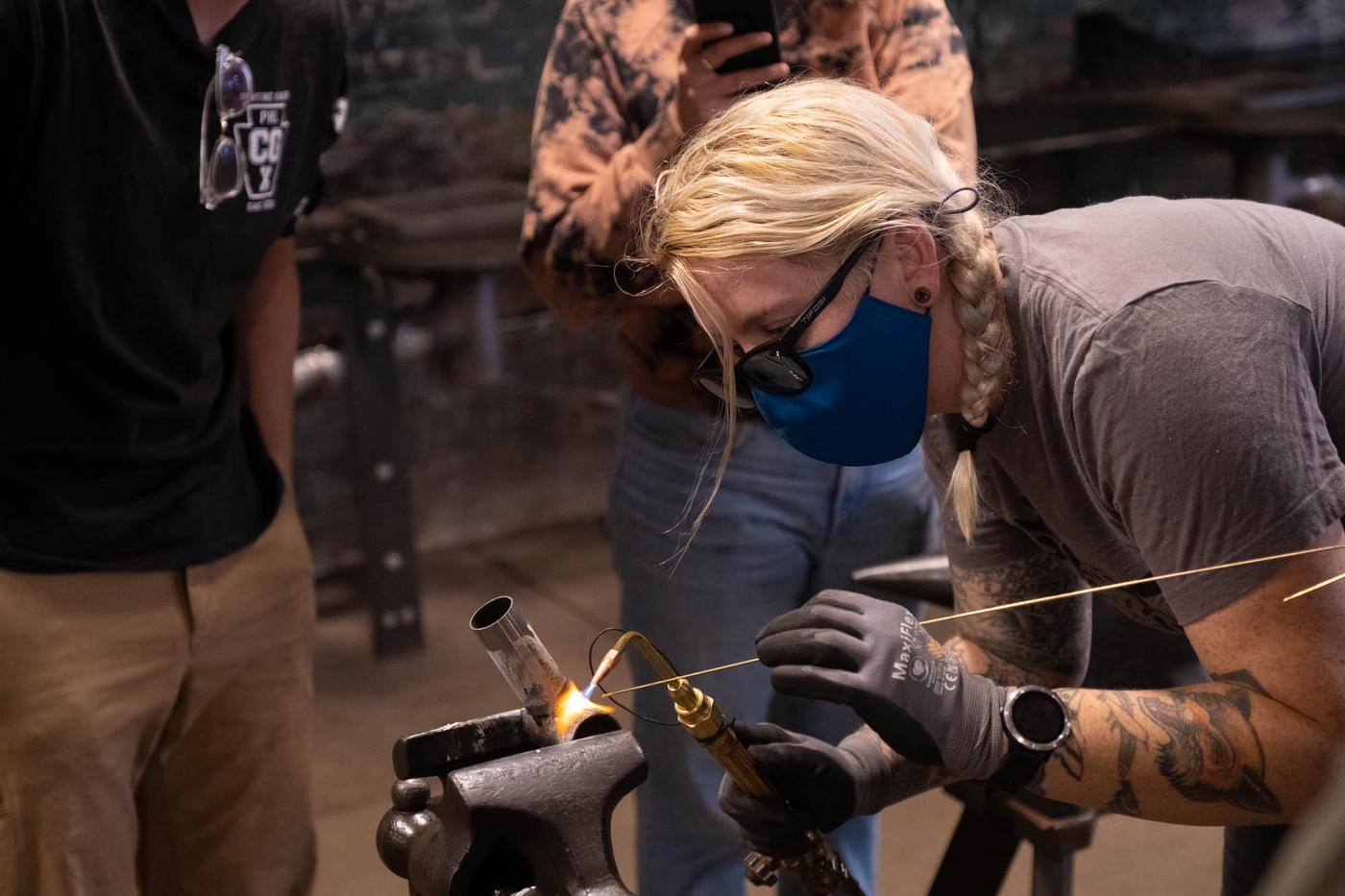 As if this wasn’t hard enough, she displayed it raw for the world to see. It was so glorious and I was truly blown away by it, especially when I pulled in close to look at her beautiful fillets. A true master of her craft. Although not flourished in hand-carved lugs or ornamental adornment, Megan’s work is constructed with the utmost care. What sets it apart is the way her bikes feel and those clean fillets. Megan was the first woman to attend the Yamaguchi frame-building school, and now she’s the first woman to teach a frame-building course in the states. It’s really amazing where she started and I can’t wait to see where she takes this in years to come!

Five years ago, the lore of a 10,000lb power hammer drew Patrick Quinn to pack up and move everything to Johnstown, PA to start a world-class blacksmith school. Early on, Pat wandered into a mediocre bike shop I was working at and I said “you’re not from around here” which sparked a story of how he recently moved to town and was teaching folks his love of blacksmithing. I visited that week and was blown away by the light, the glow of the forge, and the compressions of a power hammer I’d never experienced before. I think I spent most of that year documenting the space for them. It’s really hard to put into words just how special this place is, not just to me, but to what it has bought to the local community. For a city devoid of this type of culture, art, and expression it’s a welcomed addition. 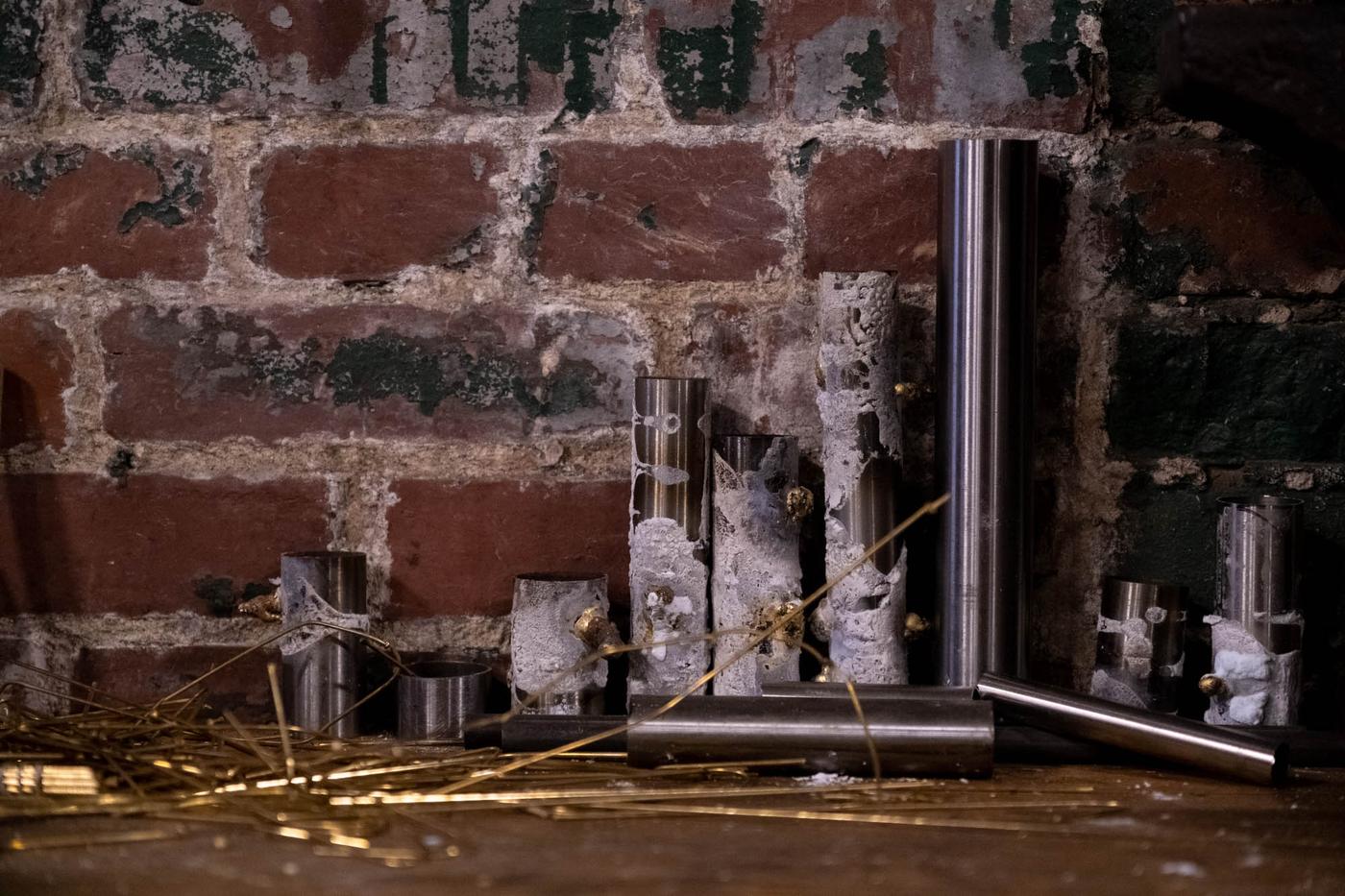 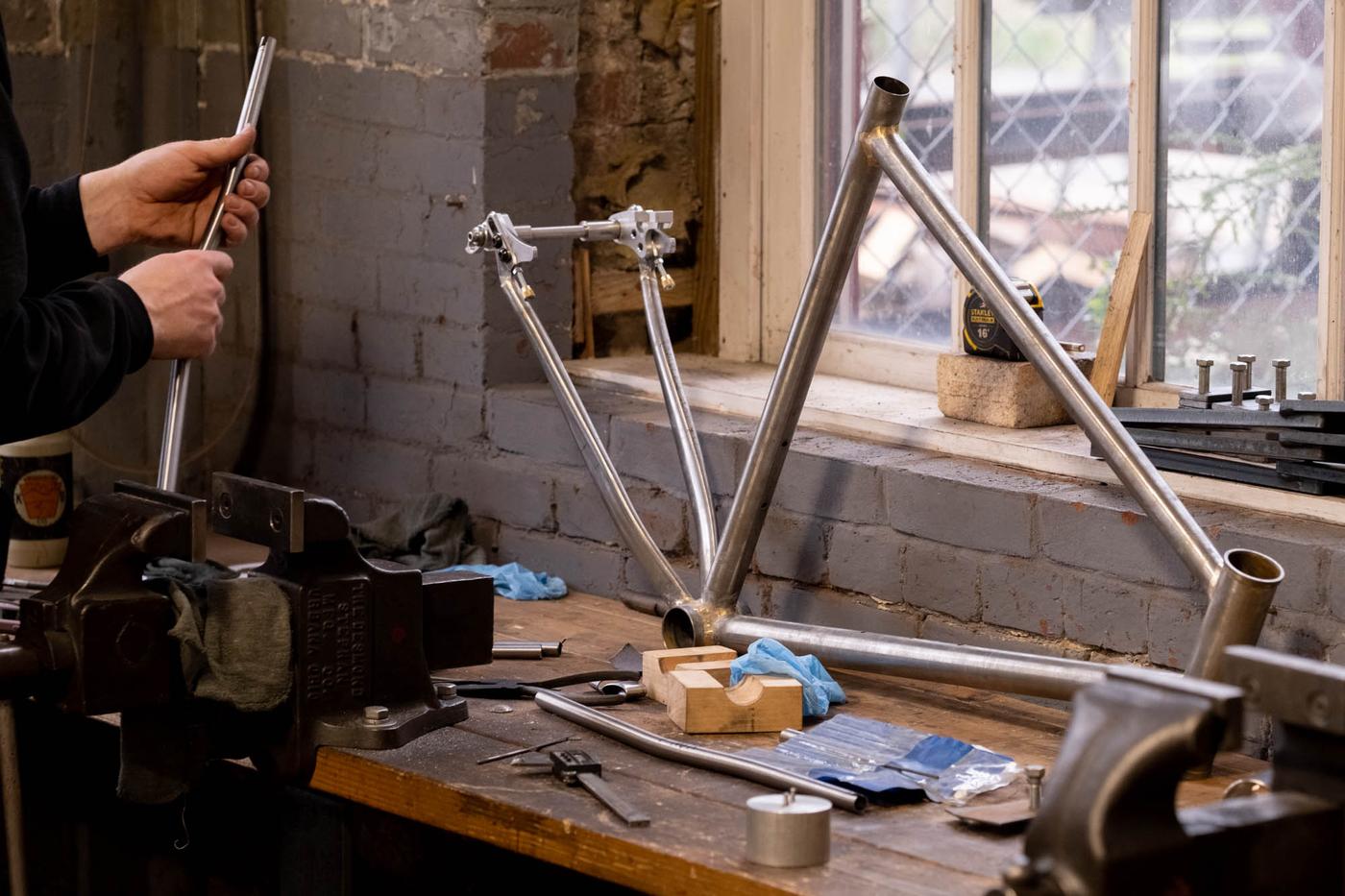 Center For Metal Arts has been drawing folks to Johnstown both domestically and internationally for the last five years. Students have attended from the UK, Germany, Australia, and plenty of other far-flung locations. The draw of the Smith Shop nestled on Iron street was too strong for me to let go of too, and I soon ditched my plans to dip on the city and opened up a bike shop not far away. You see, once that fire is lit, it’s hard to turn it off. There’s something special going on here. 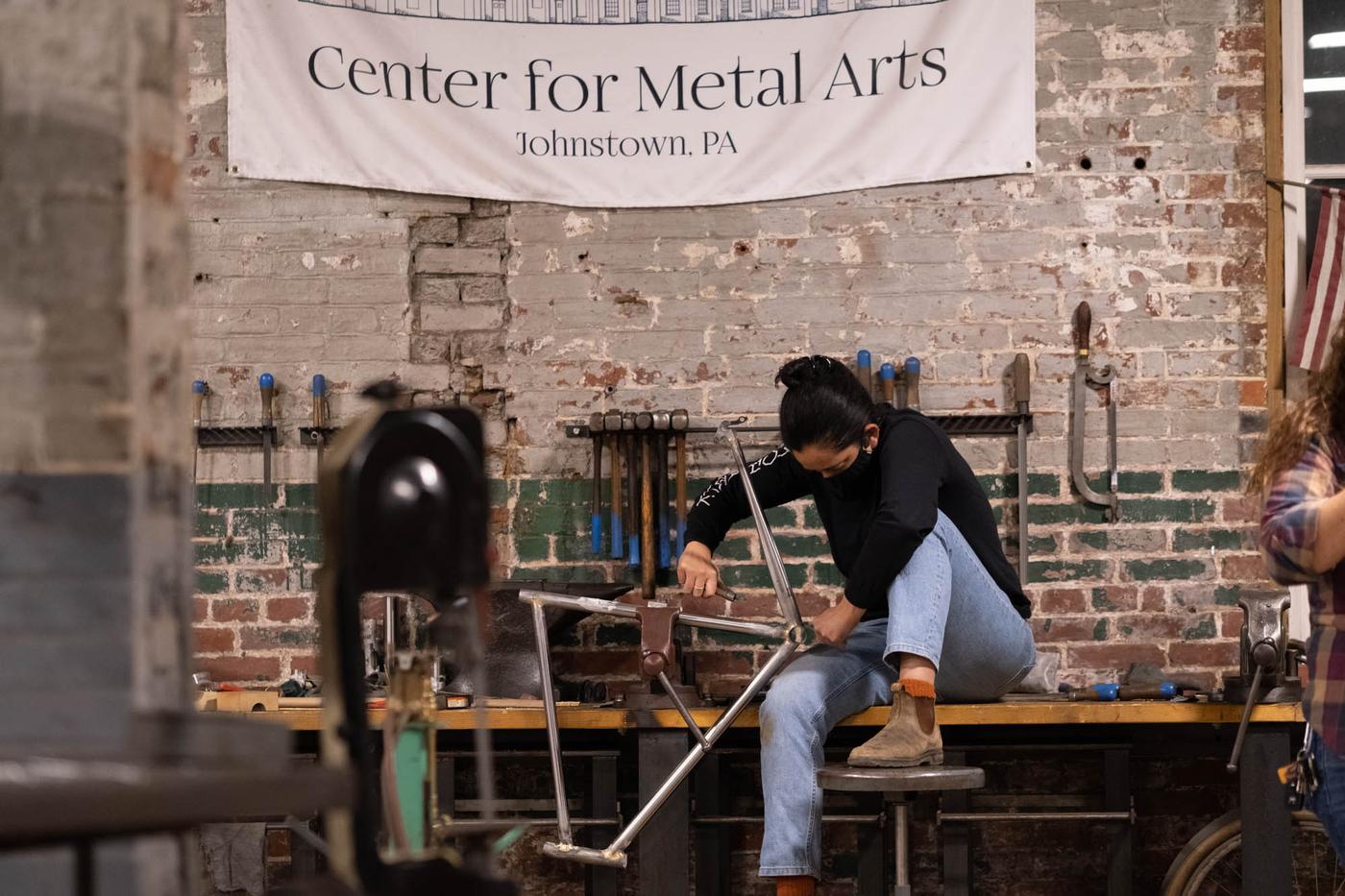 After years of planning the time had finally come, there was going to be the first women-led frame building course in the states, and it was going to happen in my hometown. The feelings of elation and joy over seeing my friends come together to create something this beautiful in my town gave me all the feels. I think we all were wondering though if folks would sign up. Approaching the the second year of an ongoing pandemic, everyone’s travel plans, finances, and safety were all up in the air. But, to our relief, students signed up from all over the country and the selection was made – we had folks from Washington, Oregon, and Pennsylvania sign up to learn the craft of fillet brazing their own frame. 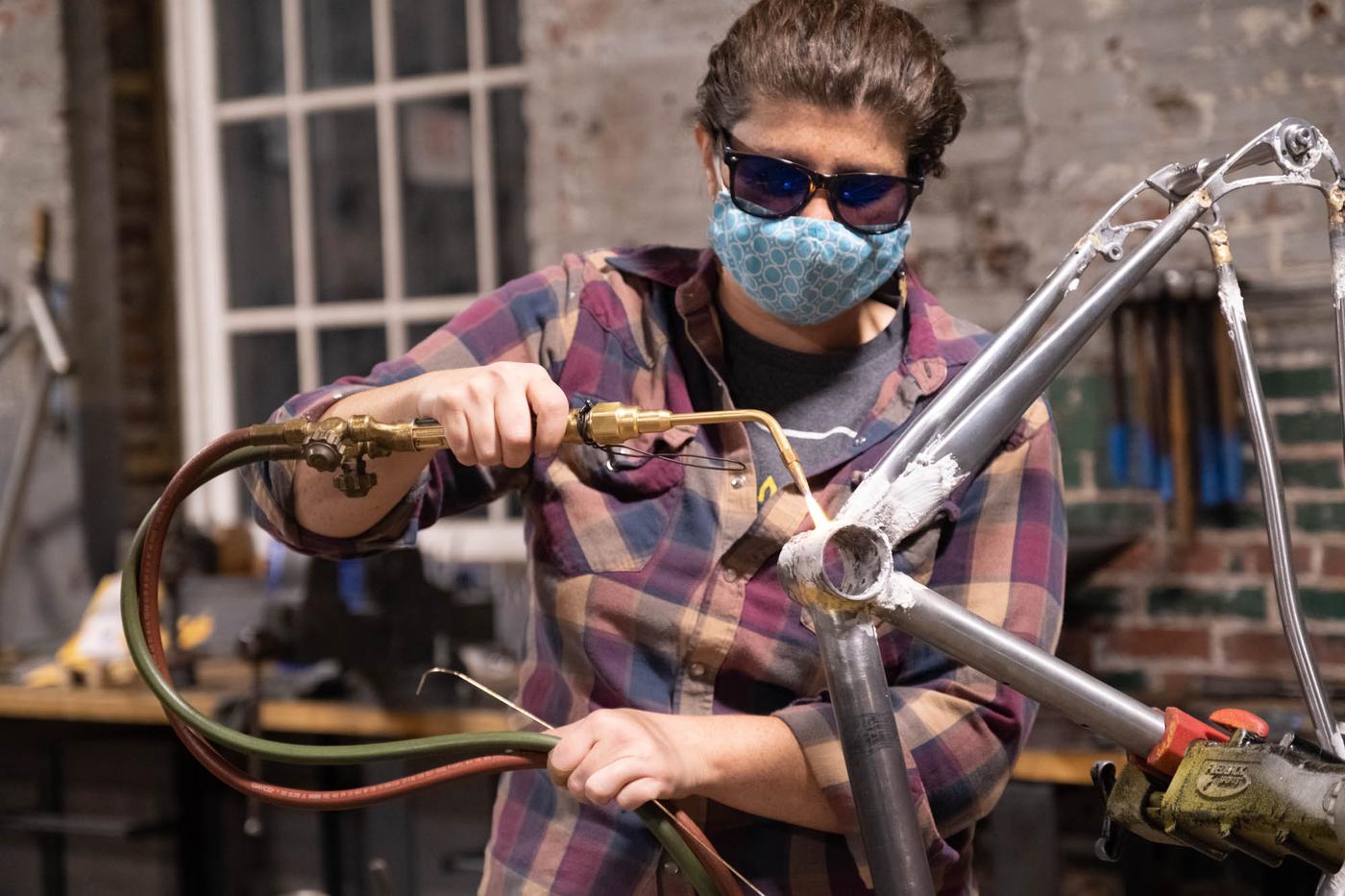 During the class, students drafted out their frame designs in BikeCAD, printed out miter cuts, and got to work. Based on the way Megan was taught, which was to do everything by hand, students hand-filed steel tubes to practice both mitering and brazing before taking their newly acquired skills to their pile of tubes. 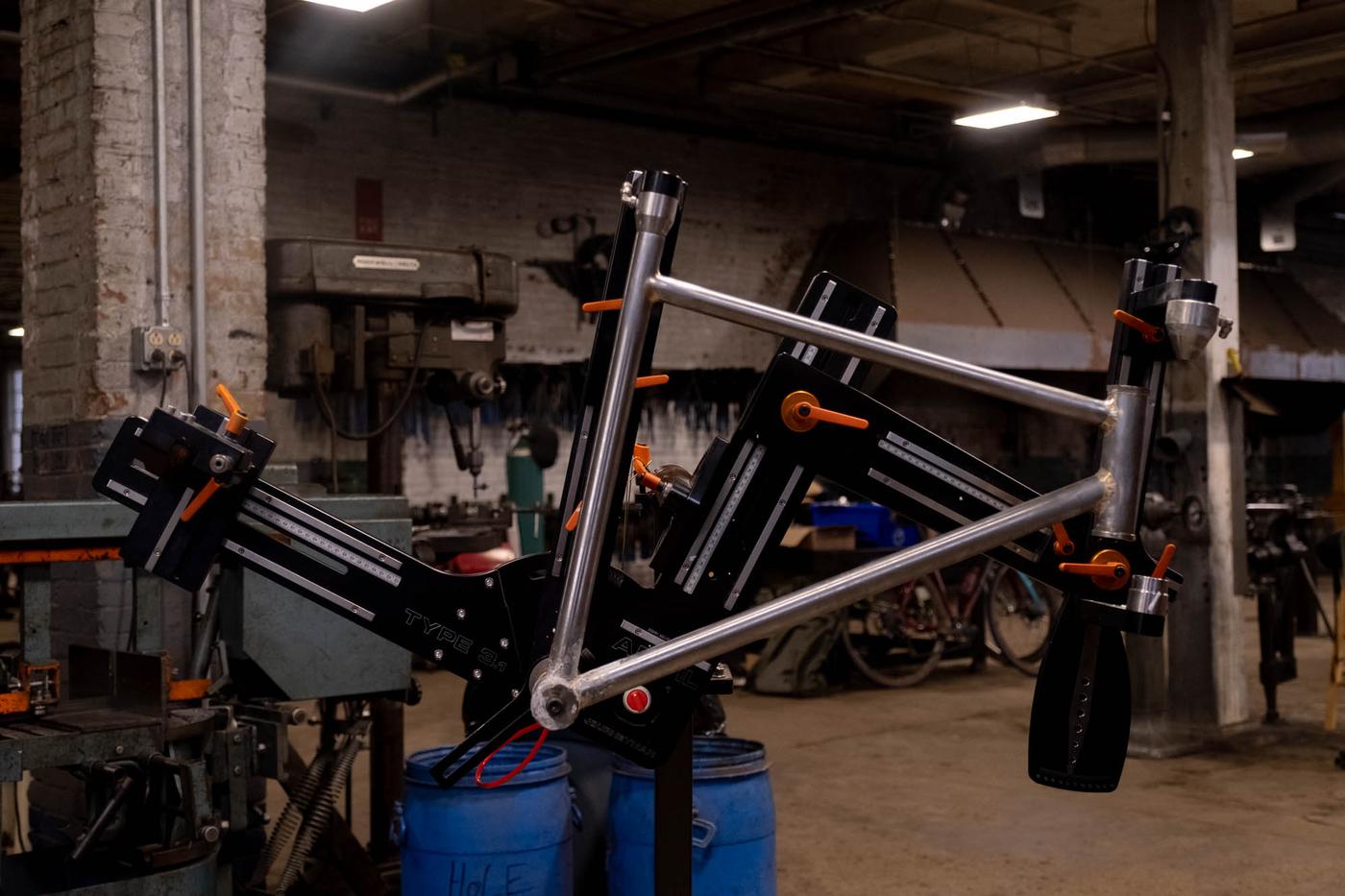 Students spent a lot of time between vices and the frame jig during this first year but, for our upcoming class in October, our friends over at SRAM came through huge and donated a brand new Cobra Framebuilding Jig to CMA. Now, there will be two jigs on hand! 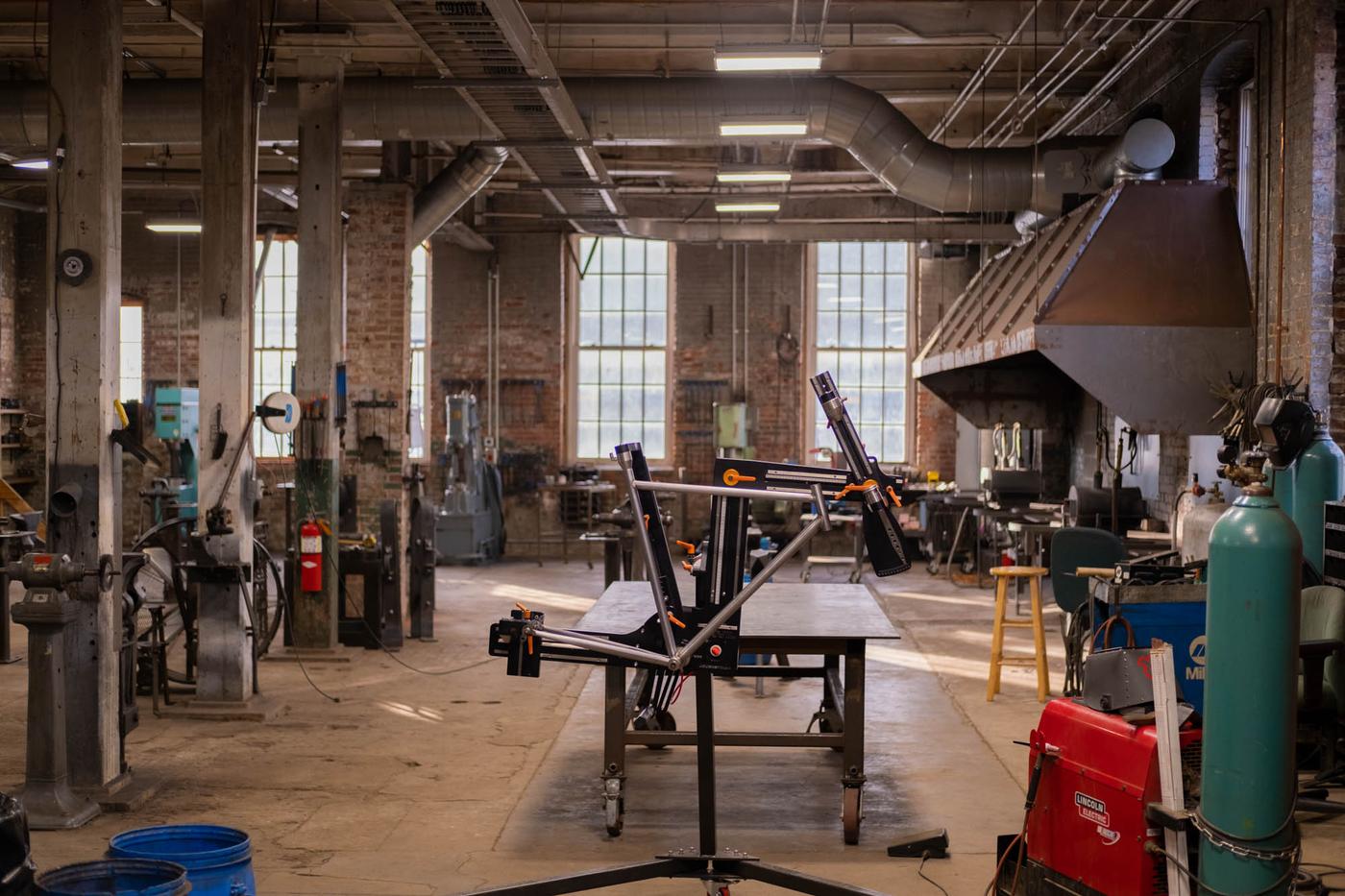 Things To Do About Town

Nestled in a valley famous for flooding, CMA has some pretty rad dirt road jaunts just a few hundred feet from their doorstep. When the world’s steepest vehicular inclined plane is running, there are even gravity runs galore, albeit this won’t start again until 2023. October is the perfect time to visit the town to make a bike and there will still be time to get out for rides on the weekends in between class and even for some night rides after the Center For Metal Arts shuts down for the day. There are usually some after-hours hangs at the bike shop and if you’re brave enough you may even take a dip in the Conemaugh River. 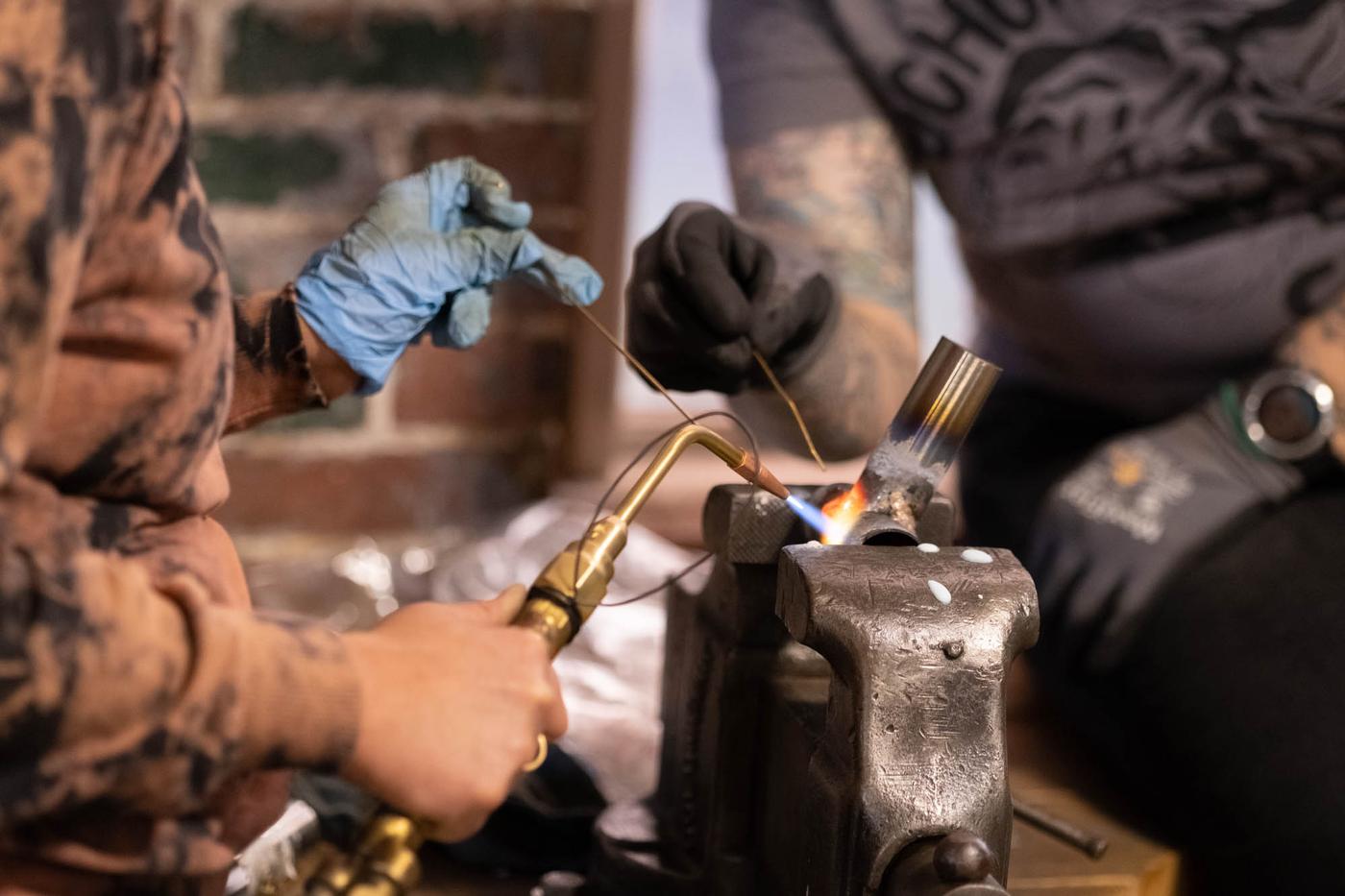 October really is the best time to visit Johnstown. We’ve got two weeks of frame-building class, a 30-100 mile bike event called Higher Ground sandwiched in the middle, and the weekend following is the Nutmeg Nor’Easter, which is just a days drive northeast. Come stay for the month. You’ll love it! 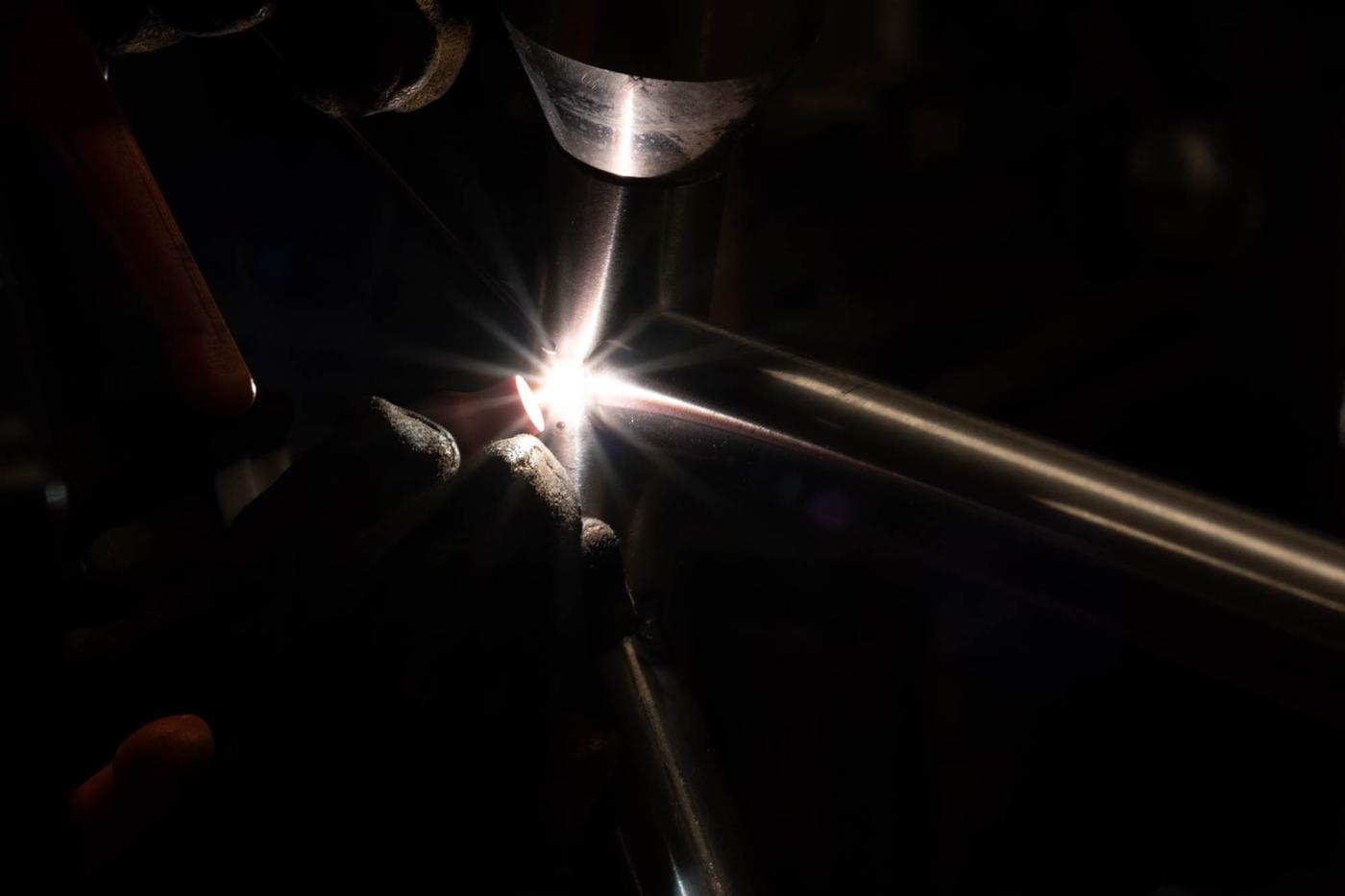 Have you been dreaming of making your own frame for a while? Would you love to have one of the best frame builders in the world teach you? Does The Center For Metal Arts facilities blow your mind? Well then please sign up asap! The last chance to register for October’s class is August 15th. Head over to CMA’s website to learn more and sign up! 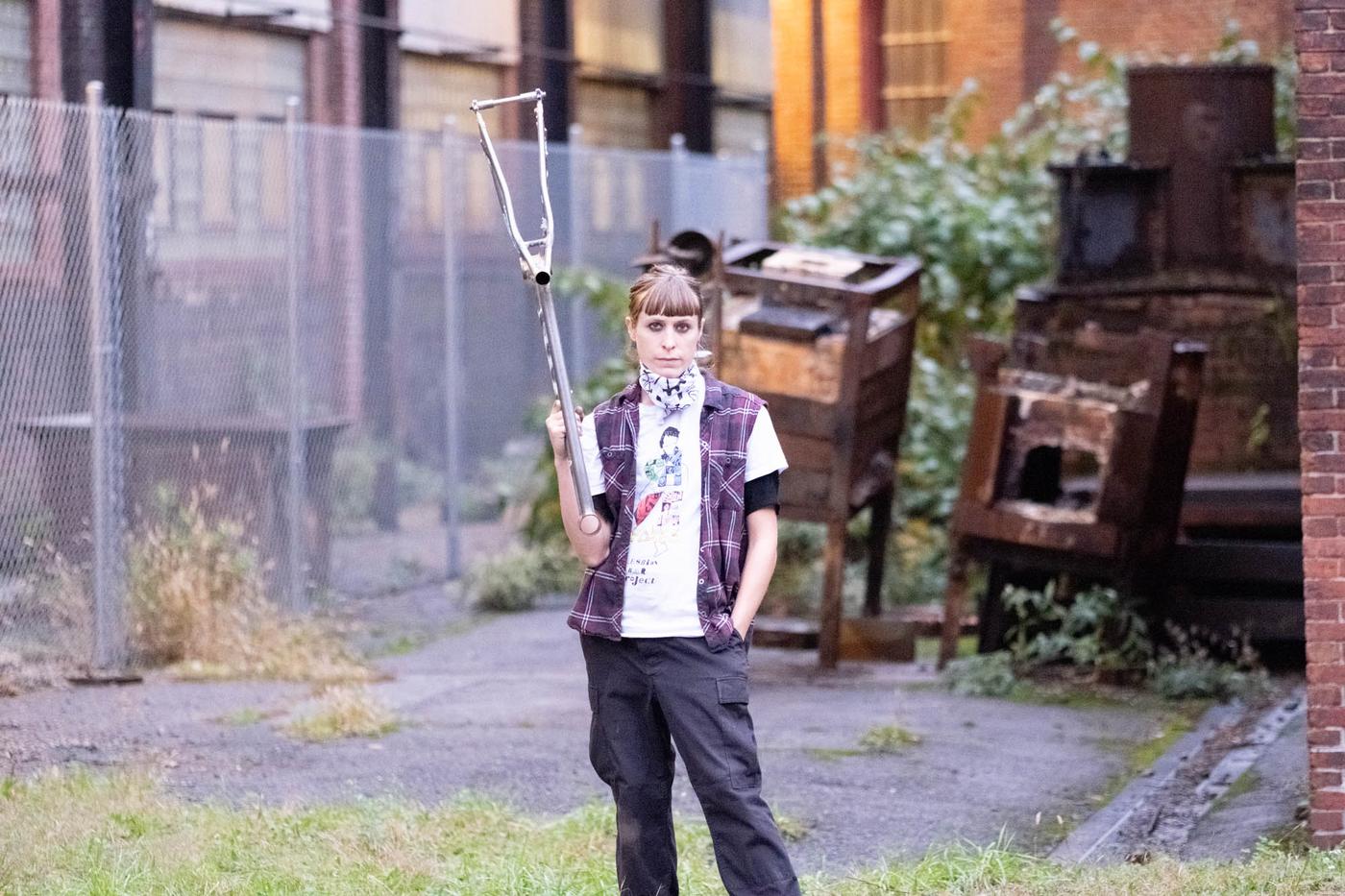 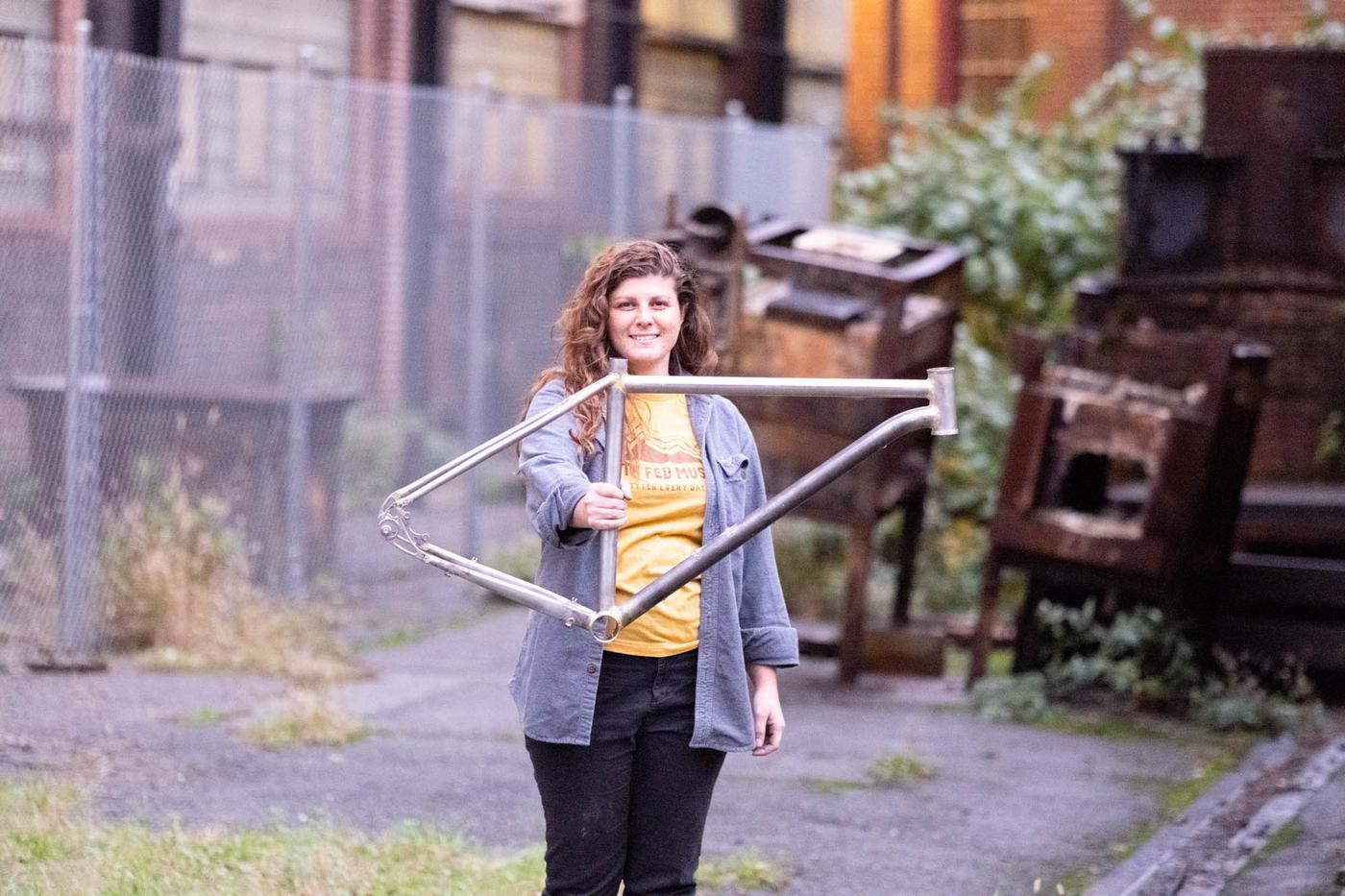 Maybe you already build frames and you’ve been looking for your little quiet slice of rustbelt paradise? It sure is affordable to live here if you’re able to work from home. There is property available here for rates that would make most folks elsewhere fall off their seats. Just as the intent of Pat is to resurrect the sleeping power hammer from its untimely demise, we’ve got goals for this city. One of them is getting more courses like this through the year, but also we’d love to have a frame-builder move here. Is that you? We sure hope so! The grass is greener where you water it, and Johnstown saw more floods and rainfall than history books would ever let you forget about. So I think that, finally, the time has come for something, new, fresh, inviting, and invigorating to sprout up. We hope you’ll join us here soon.