Have you ever been somewhere and you just knew it was special? For years Bobby from District Bicycles had been telling me about this magical place called Keith’s Bike Fort, providing lodging to the traveling cyclist. 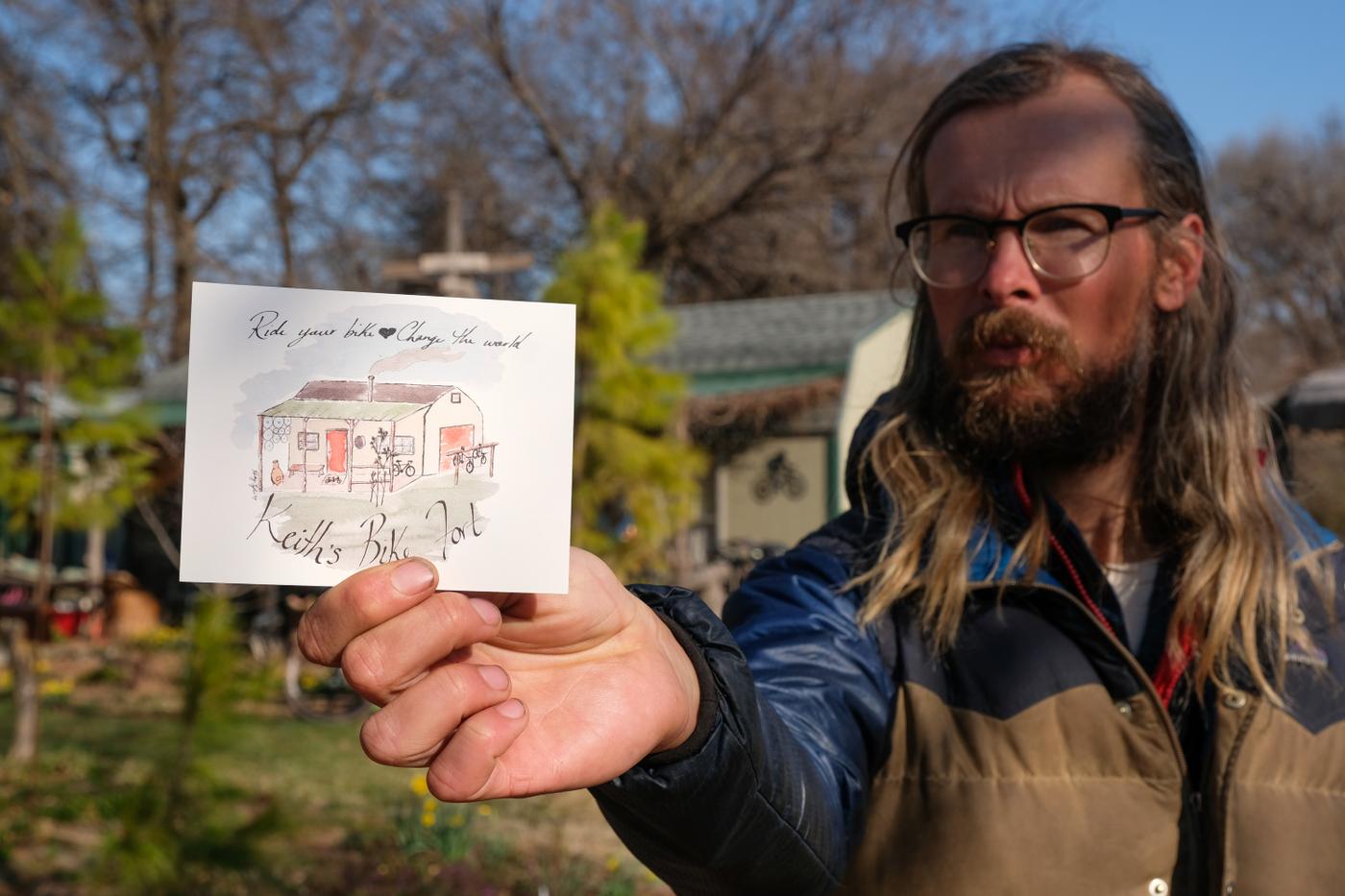 But they don’t stop there. There is plenty of space to pitch a tent if that’s more your style. They have a workshop that has just about everything you need to overhaul your bike while on the road. A suspended queen size bed outside on the porch (don’t drink too much before bed though) and a POOL! If you’ve ever been on a bicycle tour in the middle of summer, you know just how crucial a pool is, it gets hot in Perkins, Oklahoma. Don’t forget to rinse off before you jump in though. Bobby had been trying to get me out to Keith’s Bike Fort since he’d started telling me about it years ago but the timing just never worked out. This year since Easton Cycling was kind enough to send Liz and me to Land Run, Bobby figured there was no better time, and secretly scheduled our flights to leave a day later than we had originally talked about to give us time to get out to Keith’s. You all know Bobby’s tremendous stoke levels, and you all know to just go with the flow when he’s riding those waves, so Liz and I just got pitted. Much of the Real World Land Run cast was still in town, so we all hit the grocery store for all of Big Janet’s artisanal food needs and started our sunset stroll to the fort! It was a beautiful ride, with the nuclear sunset falling to the ground behind us and wild horses running alongside us. Ok, maybe they weren’t wild, but they were definitely running next to us. When we arrived at the Fort, the street was lined with friends cheering us on and welcoming us to Keith’s Bike Fort. I doubt this is how everyone who’s on tour is welcomed here, but I bet Keith single-handedly makes each and every person who stays there feel extremely special. I know he made me feel very special for my short stay there. We immediately started cooking over the fire, and with full bellies and warm hearts, Big Janet and Namz decided we should do an impromptu screening of California Golde. While the screening was just on an iPad, I believe it was the best screening of the film I attended. We were all cuddled up on the couch with blankets, just mesmerized by Sandy Carson’s and Janet’s directorial debut. After the screening, people started to wind down, Liz and I decided to take the hanging bed outside, it was a mistake. The nighttime lows dipped into the thirties, and we didn’t have sleeping bags with us. We cuddled extra hard that night to stay warm, so that was a plus, but I think I’m going to take the loft inside next time! The only bad part about Keith’s Bike Fort is saying goodbye, that wasn’t easy. But we had to make room for the next guest.

So If you’re touring anywhere near Perkins, OK, I’d highly suggest stopping in for a night or two. I personally would stay two nights and ride to Stillwater, OK and hang with the District folks. They host a few rides a week, so you can always jump on one of those. I’d hang at the shop, because their shop is amazing, and they absolutely love having fun. There’s a rad outdoor’s store in Stillwater called Summit Co. where you can up your camping game, there’s also a wonderful restaurant called Good Little Eater for breakfast, and hit Thai Loco for some wild tacos before rolling back!

You can find more info on Keith’s Bike Fort at their Facebook.