Austin, the course designer, was taking the route through the Pawnee Nation. The Black Foxes, All Bodies on Bikes, Native Women Ride and others were broadcasting their attendance on social media. Yatika Fields, the Osage artist, activist, and ultra-marathon runner who was integral in getting the race name changed in 2020, was taking part in the 50k run and the 100-mile ride, as well as painting a custom Salsa Warbird to be raffled off for a local non-profit.

To be clear, none of this is considered “normal” to see happening at a bike event in America. In a bike event anywhere, actually. The cycling industry is dominated by one group of people: White men. The last edition of the Mid South was not what one would call “diverse” in its attendance.

The Mid South crew assembling the Start/Finish trellis. This is the sign that sends all of the Mid South participants on their way and greets them when they return. 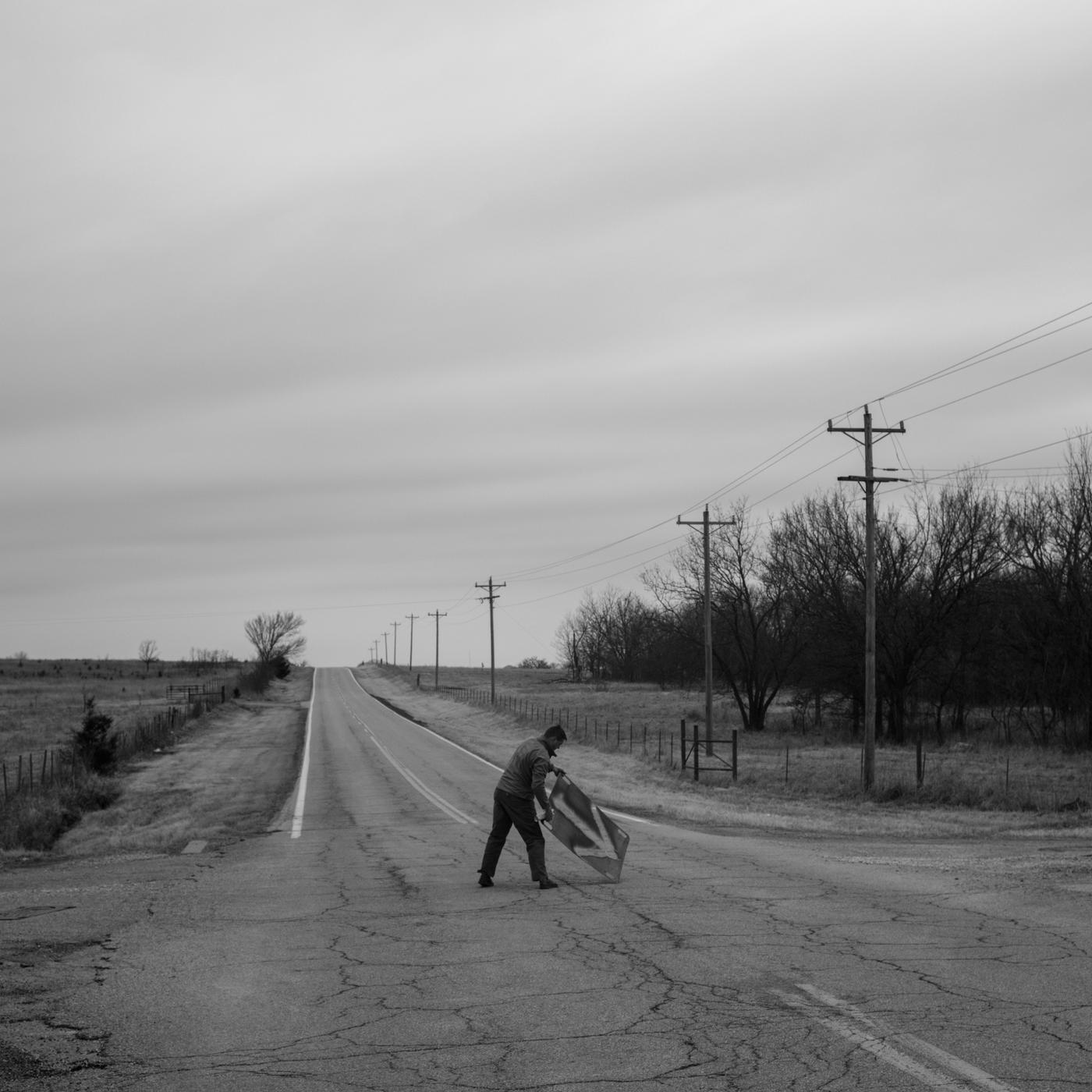 Brandon Neil lays down a stencil Thursday morning while marking the 100 mile course. The Mid South is made possible by a strong core of volunteers. Many of them have been working on the event from the very beginning. 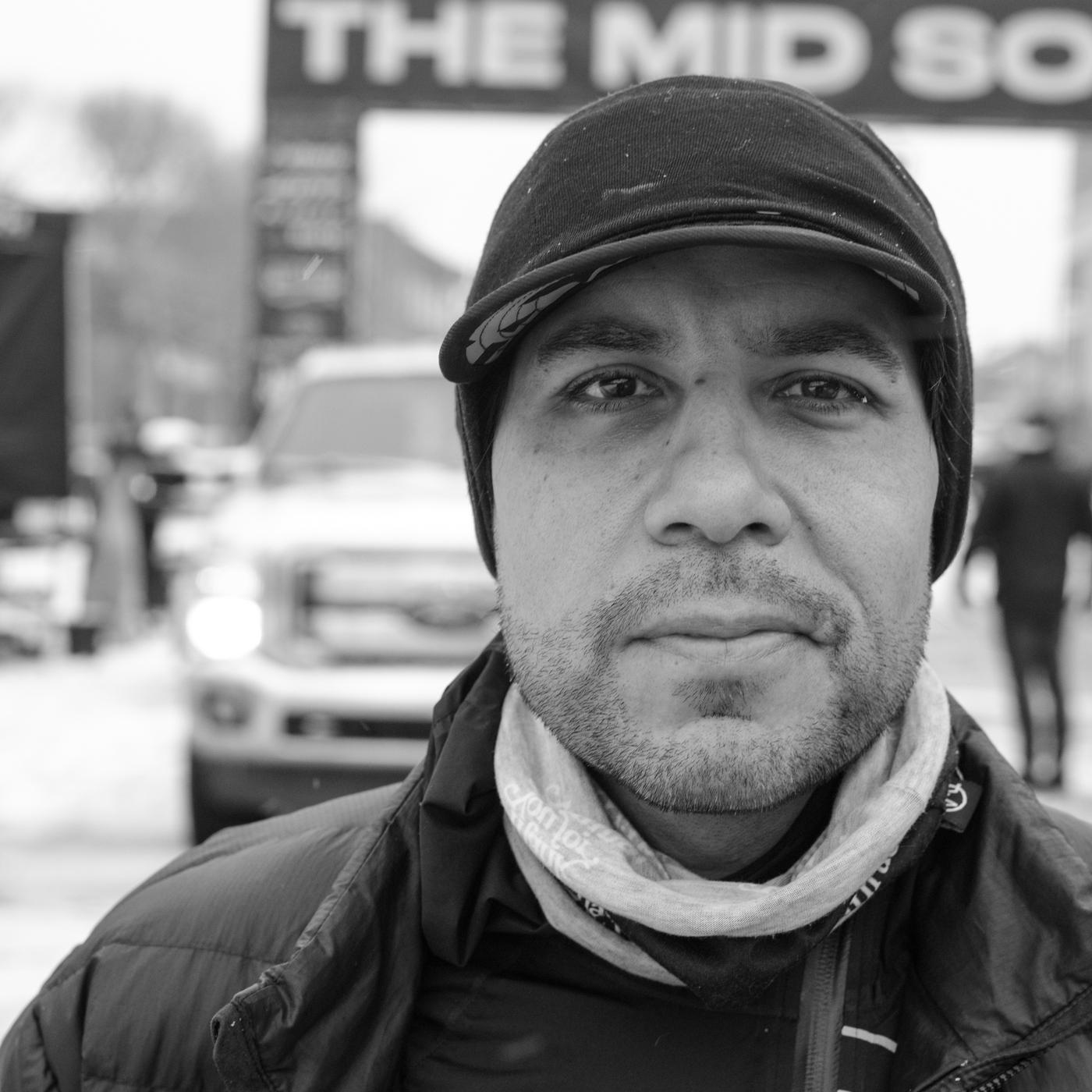 Yatika Starr Fields, of the Cherokee, Creek and Osage tribes, was an integral part in getting the event name changed from the Land Run 100 to The Mid South. An accomplished muralist, painter, ultra endurance runner and former NYC bike messenger he took part in the first ever Double Double: A 50k run on Friday and a 100 mile ride on Saturday. Yatika also hand painted a Salsa Warbird frame that was raffled off by the Mid South organizers as a fundraiser for local tribal run bird of prey rescue, the Gray Snow Eagle House. 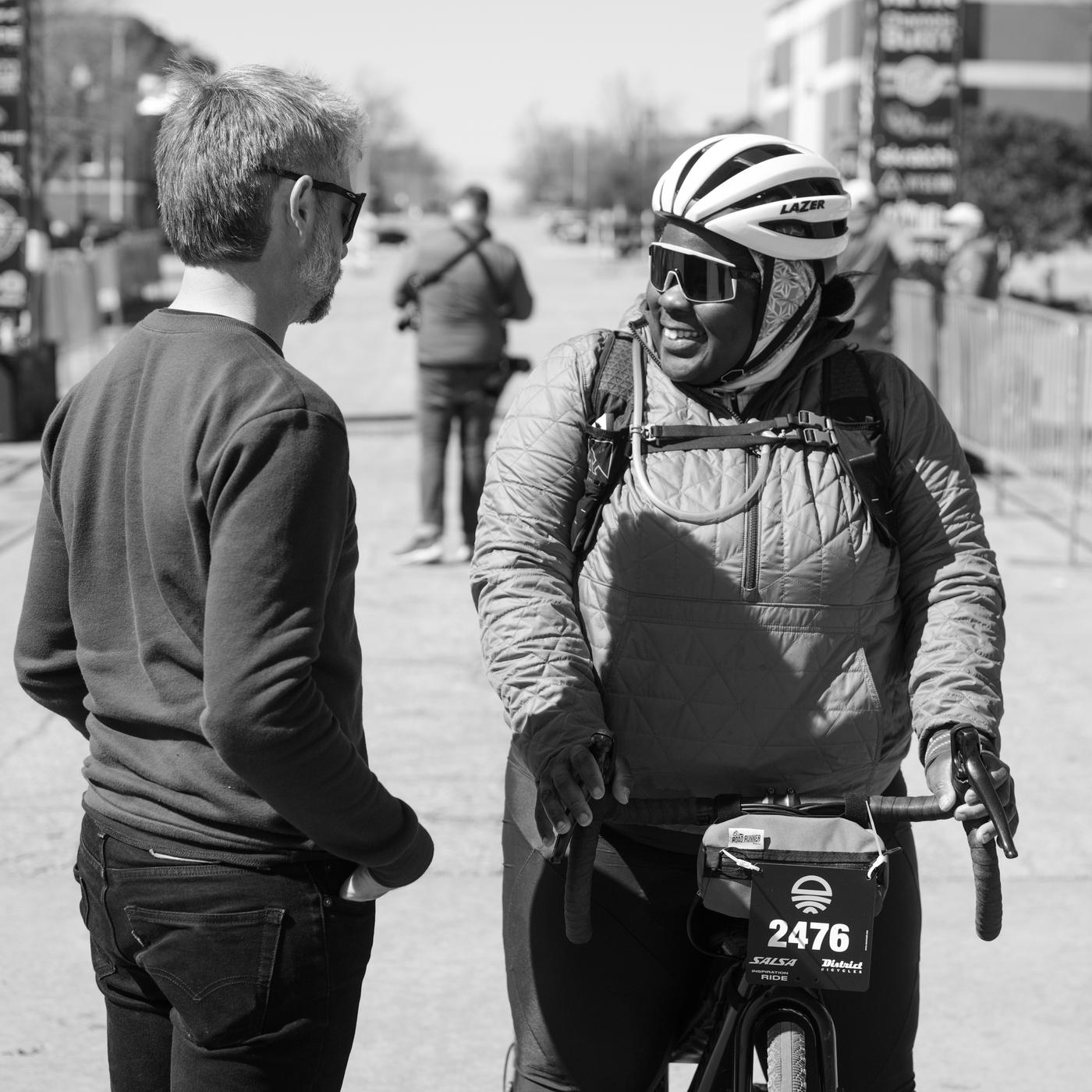 Mirna “The Mirnavator” Valerio talks with Mid South founder Bobby Wintle after completing her first ever gravel ride on the 12 mile course. Mirna is an accomplished ultrarunner and advocate sponsored by Lulu Lemon and Salsa, among others. “I almost didn’t come. I was running a wellness and adventure retreat from the 7th until yesterday (the 11th). I had to fly in last night and was thinking, ‘Am I really doing this for a 12 mile ride?’ but now I get it. This event and this community is wonderful! I’m very tired from all the travel, but I’m happy I came.”

Orange Seal Off-Road team member Cole Paton comes across the finish line in a shower of champagne after winning the men’s race with a time of 4:52:26. While many of the heavy hitting racers attend the Mid South every year, there is no prize money to be had. “We don’t offer a purse. We will offer prize money for places. I don’t want people coming here for the money. People should be coming here for the community, for the roads, for the experience of it all.” – Bobby Wintle, Mid South founder 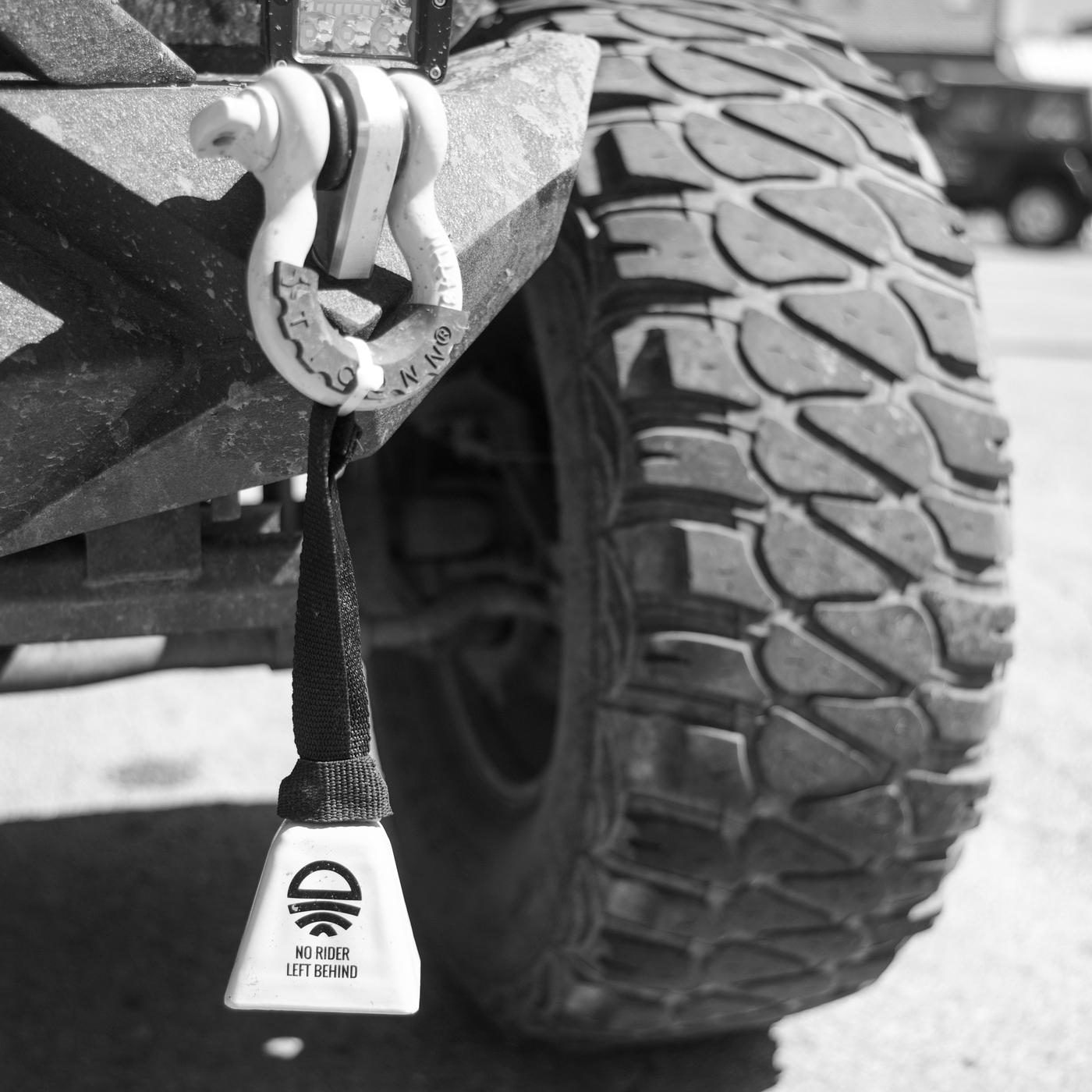 The Red Dirt Jeep Club is a crucial part of the Mid South. Based in Stillwater, OK, its members act as the on-course support for the race. They do course marking, ferry supplies to and from rest stops, shuttle injured and exhausted riders off course back to the start/finish area, provide live updates and logistics information to the event organizers and help with course tear down the day after. Their motto during the Mid South is “No Rider Left Behind.” Cinch Cycling team member Lauren de Crescenzo receives a hug after finishing first in the women’s division of the Mid South with a time of 5:08:40. A strong field of women, including World Pro Tour racers like Emily Joy Newsom, typically attend the Mid South. Mid South founder Bobby Wintle (right) hugs the first every Non-Binary class winner Apollo Leonard (left). 2022 marks the first year the race has had a Non-Binary class. “Gravel welcomes everybody. We want everyone to feel comfortable here like they are part of our family.” – Sally Turner, Mid South Event Manager 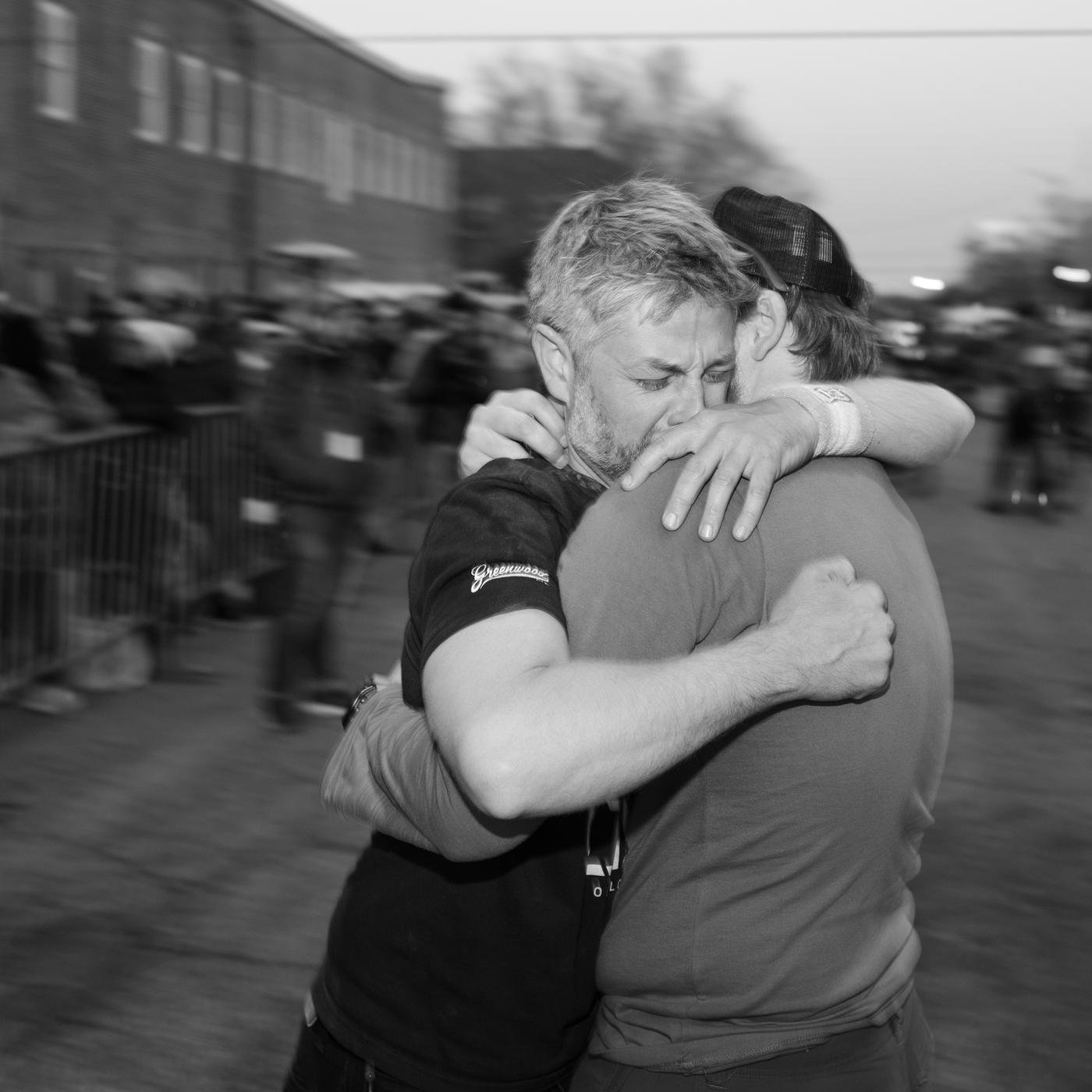 It’s early evening. Bobby Wintle has been going full bore since 6:00 am. He hugs every person who crosses the finish line and will wait as long as it takes to see the last rider in. In between finishers, Bobby is dancing to keep himself energized, chugging water and pushing on as hard as he can. I walk to him and say, “Bobby. Drop the front and look straight at me. Show me where you are.” Without a word he stops dancing and stares straight at the camera…intense, exhausted, drained. Jason Strohbehn, the Director of Operations for the Gravel Worlds, walks over and wraps Bobby in a huge hug. Bobby breaks down and cries. A minute later his public persona is back on as he gets back to entertaining the crowd and hugging riders as they cross the finish line.

“The Bobby people see this week, that’s not the real Bobby. It is but it isn’t. He genuinely loves every person who comes across that finish line. But he isn’t as crazy the rest of the year. He couldn’t be. It takes so much out of him.” – Sally Turner, Mid South Event Manager With nearly fourteen and a half hours passed, a small group of cyclists, family members and event crew await the last riders to arrive. A new DFL (Dead F*cking Last) trophy awaits the final cyclist: A giant bull skull complete with horns. Tony Aco, the official last rider to finish the 2022 edition of the Mid South, leans exhausted on his bicycle. After a crash early in the race left his drivetrain broken he rode over 90 miles to the finish with a single gear. His finish time was 14 hours, 42 minutes and 7 seconds.

I went to this year’s race and witnessed what I hope is the beginning of a sea change in the cycling industry. There were so many BIPOC groups and individuals there to take part, VISIBLY, in the event. There were so many people of different body types that normally avoid “races” in attendance. Their numbers weren’t massive, but they were there. It was breathtakingly beautiful to see. I hope we see more in the future, at every level of cycling.