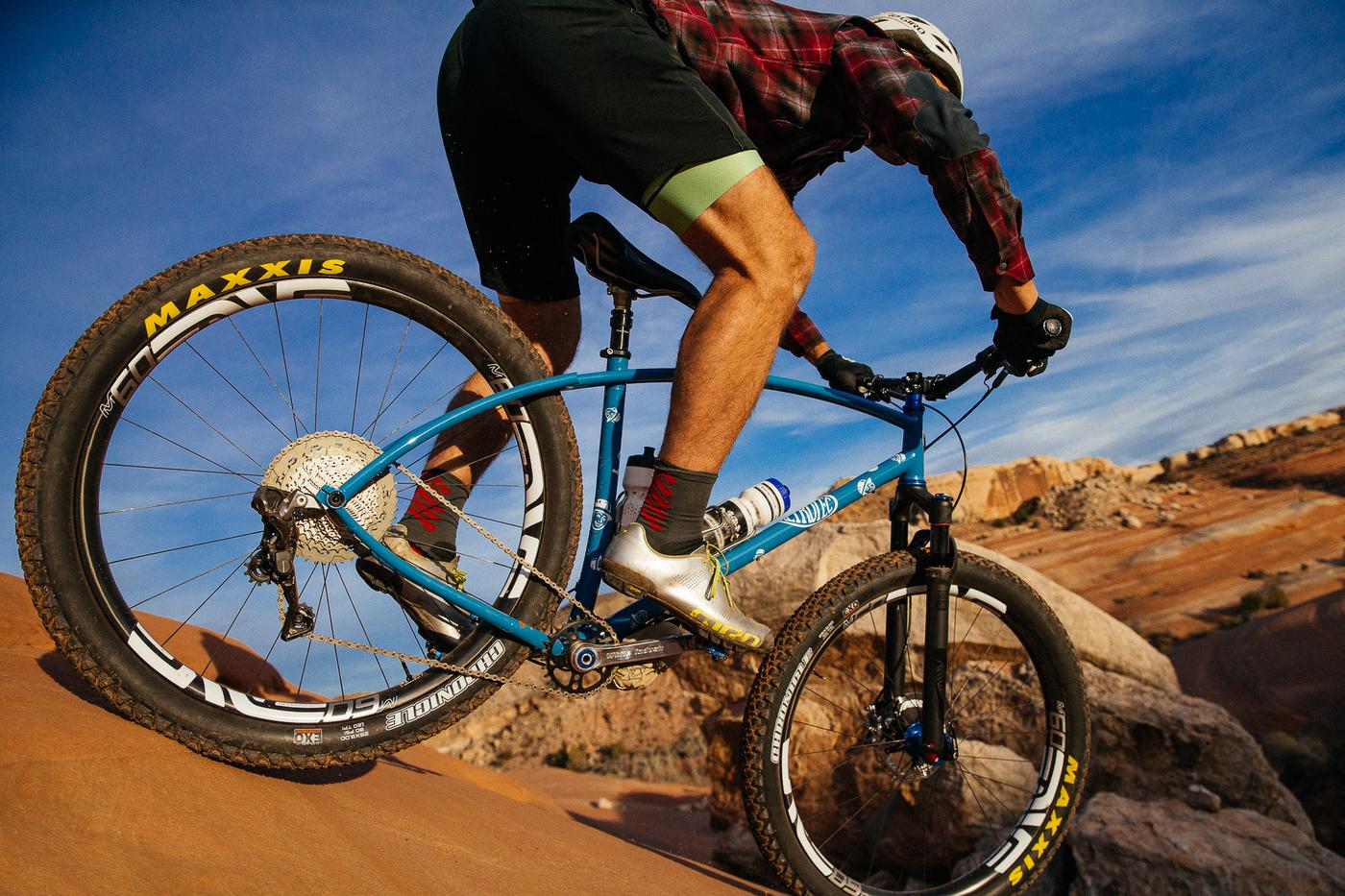 Over the past few weeks, I’ve received numerous emails from readers, politely asking the Radavist to weigh in on a pressing debate. The discussion in question began with Bike Snob’s piece for Outside Magazine on the importance or at least the value of the fully rigid mountain bike. This piece was then replied to by Vernon at Pink Bike, who called riding rigid ridiculous and likened it to being kicked in the balls numerous times. Side note: if you get hit in balls riding a bike, you’re doing it wrong. Now, both op-ed pieces should be taken with a grain of salt, since they are, after all, just that: opinion pieces. Nothing is stated as fact in either article, although Vernon’s piece does seem to fit in with Pink Bike’s readership, who are quick to chime in that even hardtails are ridiculous.

Are they, really? Well, here’s the thing, I’m going to address this “debate” with a few points, beginning with… 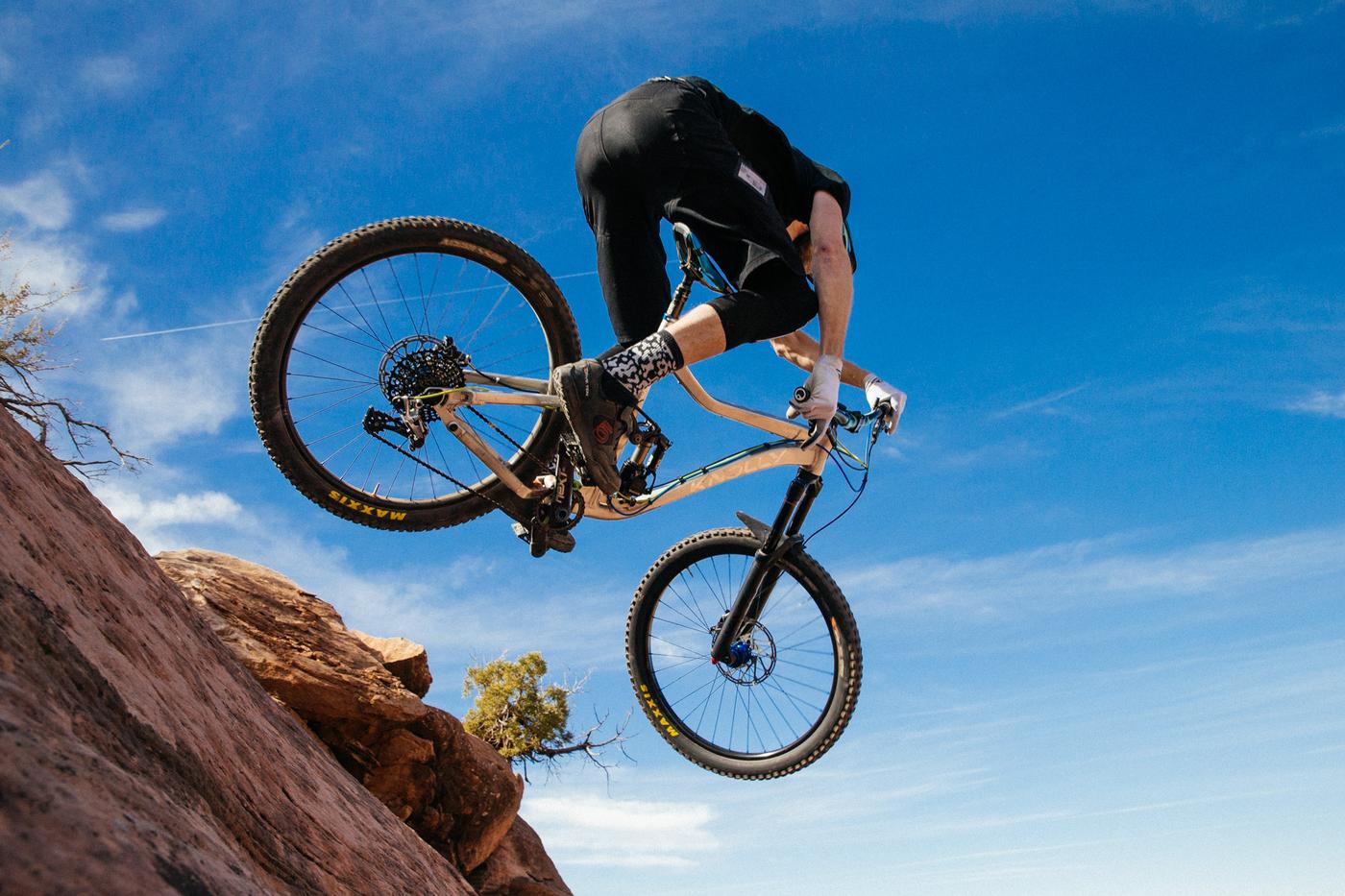 Vernon says he began as a road cyclist before he ever got into mountain bikes, at a time when rigid bikes reigned supreme because there wasn’t an option for suspension. He remembers how being anti-suspension was a thing, mostly because he had never tried it and once he did, he didn’t want to go back. Get that motocross technology out of our bicycles! Sound familiar? Chime in with an e-bike debate here. This is an understandable and a very popular opinion, no doubt. Bike Snob’s approach comes from a more purist mindset. Why corrupt the beauty and simplicity of riding a bike on trails?

Here’s the thing: Bike Snob lives in New York and rides his local trails, which, are very mellow compared to someone like Vernon riding his trails in more technical, mountainous terrain. Now, I’m not implying Bike Snob doesn’t ride technical terrain, I’m just trying to establish context. Personally, I don’t think you need a suspension bike to ride some of Snob’s trails. Mostly because I’ve ridden a few on a ‘cross bike and found the lack of suspension technology to increase the fun factor of these otherwise, very tame trail networks. We have some similar trails when I lived in Austin, which were, again fun on a rigid, but boring to ride even a hardtail.

These two authors and their opinions are byproducts of their context. One writes for the leading mountain bike industry website, which focuses a lot of gear and technology, while the other writes creative and eloquent cycling satire. I should also note that I respect both of these authors greatly. Context also applies to trail design. In an area where our mountain bike trails are essentially hiking trails, we have to ride them with respect for the other users. That means, everytime someone skids a turn on singletrack, it ruins the surface of the trail, decreases its drainage and in general, is a bad look for all mountain bikers. Same goes for flying down a trail, especially without a bell, wearing essentially a motocross outfit, yelling at hikers to get out of the way. Since a shuttle has been running here in Los Angeles, and has grown in popularity, there are a lot more of those people using it on enduro or all-mountain bikes. For many of these riders, who also race enduro, these trails become practice courses, at the expense of the trail itself and the other users.

When you’ve got shared hiking trails and bikes that are designed to go very, very fast downhill, you end up with problems. The competition for speed and lack of foresight always tinges cycling, across the board. If you’re a roadie who’s going too fast on a cycle path or an enduro dude blasting a shared use trail, you’re not helping cycling advocacy, you’re hindering it. Granted, these examples are extreme. There are good and bad cyclists across the board, yet I will say the modern, high-tech mountain bike industry does little to educate riders on the difference between a bike park and a mixed-use trail where your grandma might be hiking one day. 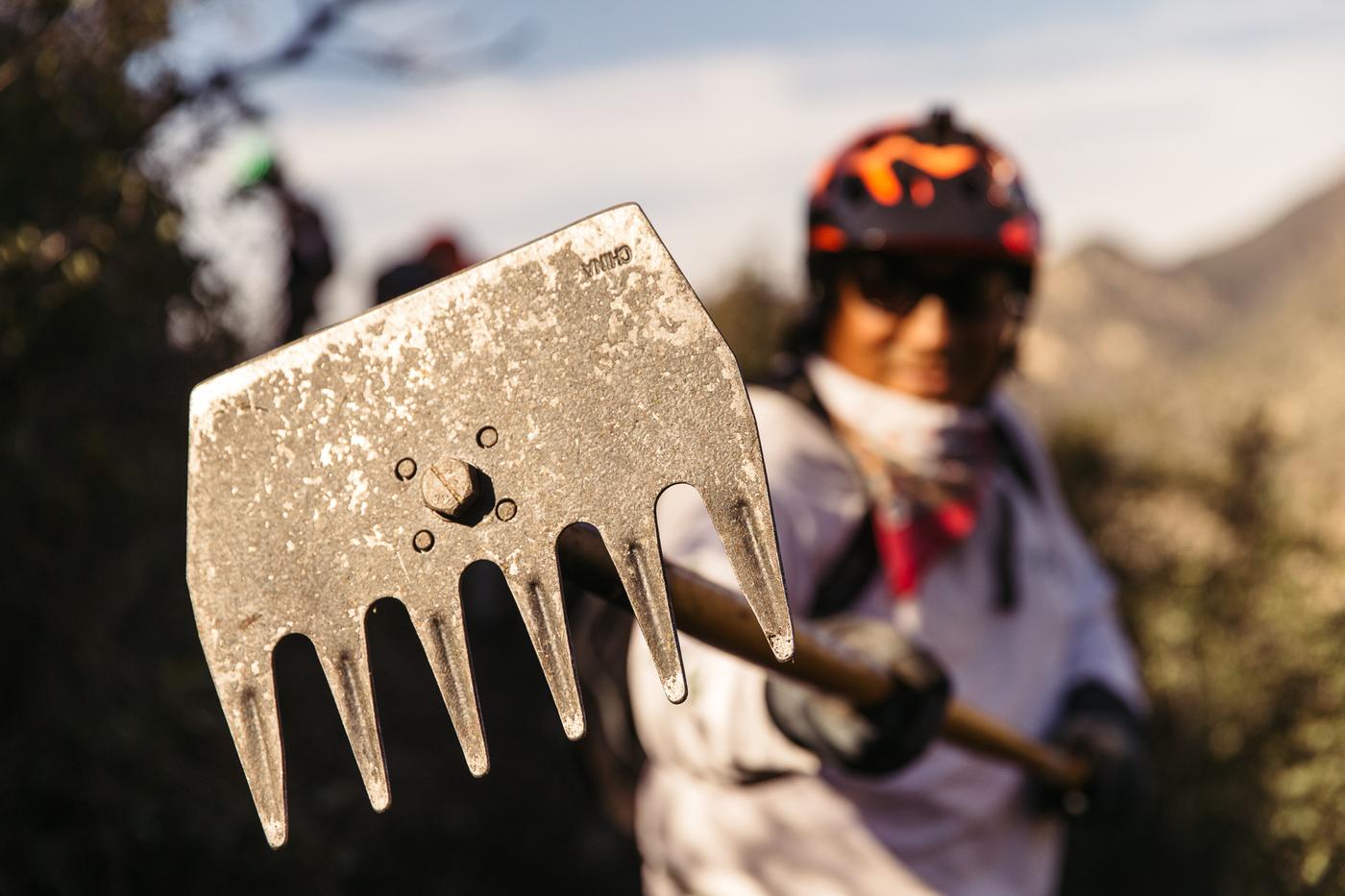 Now, riding really really fast on designated mtb-only trails, in bike parks is another story. Take the shuttle up as many times as you want and let it rip. Those parks have full-time staff to work on the trails. These employees fix all the blown out corners and short-cut lines the speed-minded cyclists might make in the process of working on their runs. In backcountry, primitive, yet mixed-use trails, you’re unlikely to see such quick response. Our trail advocacy is great here in LA, with multiple work days, encouraging people to not only learn about trail maintenance, but also trail design and sustainability.

In short: go as fast as you want in a park, but observe a bit of constraint on mixed-use trails, regardless to what you see online. One of Vernon’s arguments against rigid bikes, and I’d imagine, hardtail bikes is in response to people saying full suspension bikes get boring because they’re too easy, to which Vernon requests that you just need to go faster, for longer and take on trails that you’ve previously deemed unrideable. I’ll agree that becoming a better rider encompasses all of that, but I do not agree that you need a full suspension bike to reach trail nirvana. Also, let’s not forget the problem with speeding on shared use, primitive trails. Speed kills corners when a more-than-capable bike is wielded by a less-than-capable rider. What people should be worried about is controlling their bike and their speed. Some people have beautiful bike control skills. They can shred any bike, just about anywhere and when in the right conditions, can break the sound barrier descending. These riders don’t apply here. What I want to address is the first-time mountain bike owner or rider. After talking with people about this very debate over the years, I’ve realized that a full suspension bike, for a first-time rider, is a great tool to learn how to survive your local trails and even have fun doing so. There’s a larger margin for error and full suspension bikes can be more forgiving, especially when you pick a bad line, at speed. For people who might have been riding their whole lives and have ridden all sorts of mountain bikes, developing these skills isn’t as much of a concern to them. Most riders say they like full suspension bikes because they’re less abusive on their backs, or wrists, or whatever and again, that’s totally fine, but there are some riders who can ride a full-rigid bike down a trail and not have these issues. 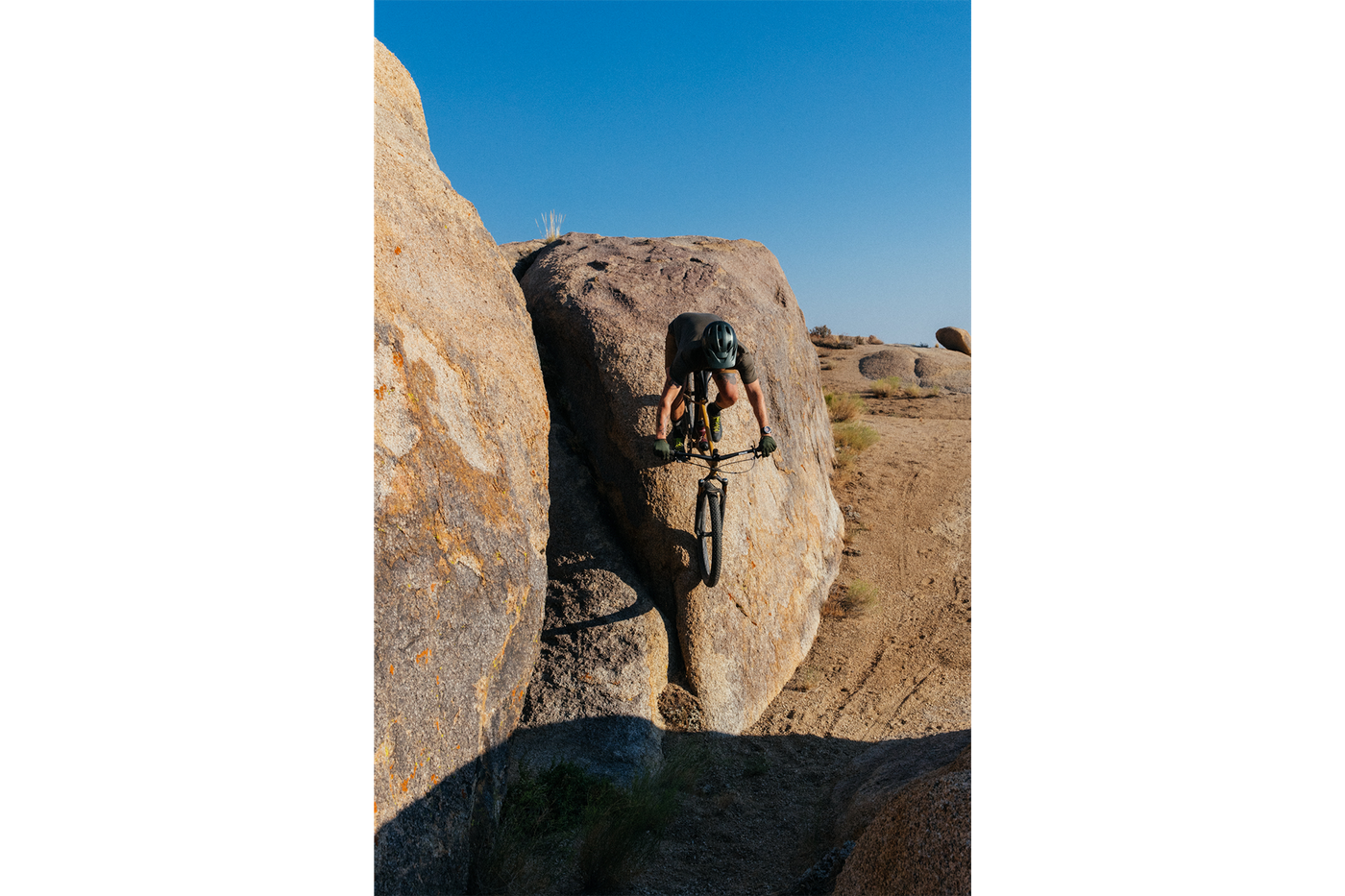 While I always love hearing people’s support for rigid, even singlespeed mtb riding, the one thing that is always repeated is the term “trail connection,” or “connectivity.” Meaning riding slower, through technical terrain is going to enhance your experience on the trail. I can identify with that and often feel when I’m demo’ing, reviewing or renting a full suspension, I can let myself let go of at least part of the mental connectivity I feel when on a hardtail or rigid bike. Now, this mental connectivity can be terrifying for some people, but for myself and probably most my riding buddies here, it’s part of the fun. Yes, we still do jumps and jib on rocks or roots and no, we probably don’t go as big as others, but we’re still having plenty fun and going as fast as the trails will allow safely. There’s nothing worse than a creak and in a full suspension bike, you’ve got more moment connections to do just that. Bearings here, bearings there, press fit this and that. All these moving parts need to be maintained. I’m not talking about vehicle maintenance, replacing belts, or air filter, once a year or so, I’m talking one really wet ride or a few really dry rides and suddenly your bike is creaking with every pedal stroke. Now, where Bike Snob goes on to say that ALL suspension is evil – in his lighthearted, cynical way – I’d argue that a long travel hardtail with a dropper post will give you plenty of compliance and most importantly, confidence, with a lot less maintenance to worry about. Plus, a steel or aluminum frame has two places where bearings might need to be serviced, not multiple. That’s not even accounting for the rear shock. Yes, you’ve still got to service a front shock, but if you maintain it with care, you can go years without a rebuild. Technology comes at a price. As you’d imagine and I’m sure have witnessed, the pricing on a high-end full suspension bike can be very off-putting, especially when compared to a hardtail, which many new completes are coming in under $2,000 these days. Sure, you get what you pay for with anything in this world, but that doesn’t mean you have to go into debt over a new bike. 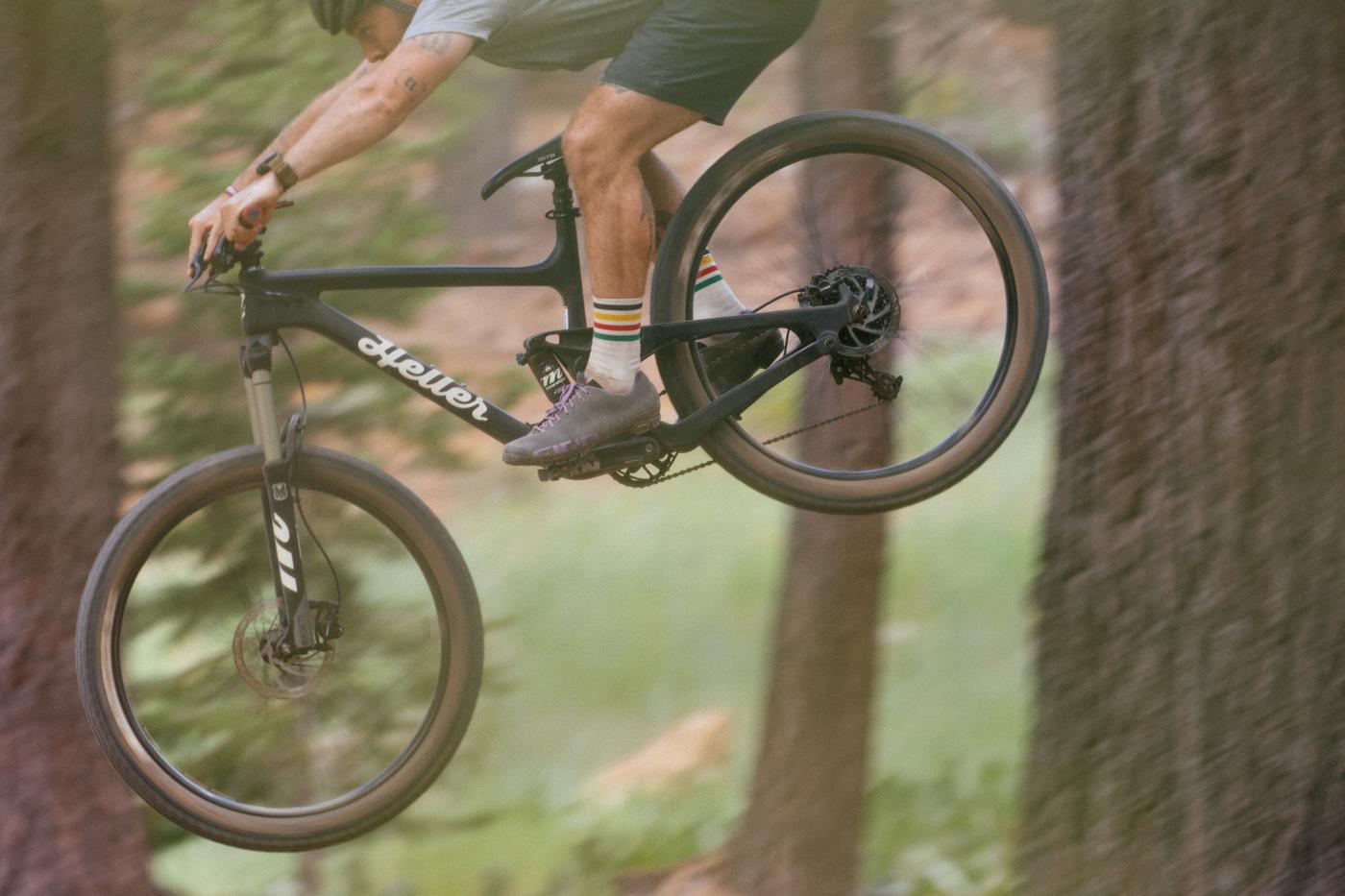 Which Bike For You?

No one can tell you what is the right bike for your riding. You just have to try as many as you can and form your own opinion. Personally, I love demo’ing and reviewing full suspension bikes, because I get to use them for a few weeks and send them off. I have no financial obligation to them. While I respect other’s property, I don’t have to pick up the maintenance bill after six months of ownership. I also love riding rigid bikes, mostly for their practicality in a city where I can ride to smooth, urban singletrack from my front door, not to mention their ability to be turned into bikepacking rigs with ease. For me, however, a hardtail has proven to be the most reliable, fun and cost-effective mountain bike experience to own. I’ve ridden the trails in Tahoe, Santa Cruz, Utah, Arizona and all over on hardtail bikes and I’ve never regretted that decision. Sure, I get comments and snide remarks from some people, but the comments that resonate are the whoops and hollers I hear when someone sees our group clear a technical section, smoothly on a hardtail.

Rigids and hardtails are often the butts of jokes, especially from the enduro or downhill crowd, yet I’m not riding bikes to appease them, I’m riding bikes to have fun and that’s what’s the most important thing to remember. If you can have fun on a rigid or a hardtail, fuck what Vernon says and if you hate rigid or hardtails, fuck what Bike Snob and myself are saying. You do you, but there’s no sense in pissing on the Yin to your Yang and please, respect your local trails. They’ll be here on Earth much longer than you will.

Got an opinion? I’m sure you do. Drop it down in the comments.