The road to nowhere starting nowhere and ending soon

Get Lost and Find Yourself: Cycling to the Breaking Point
Photos and words by Ryan Le Garrec 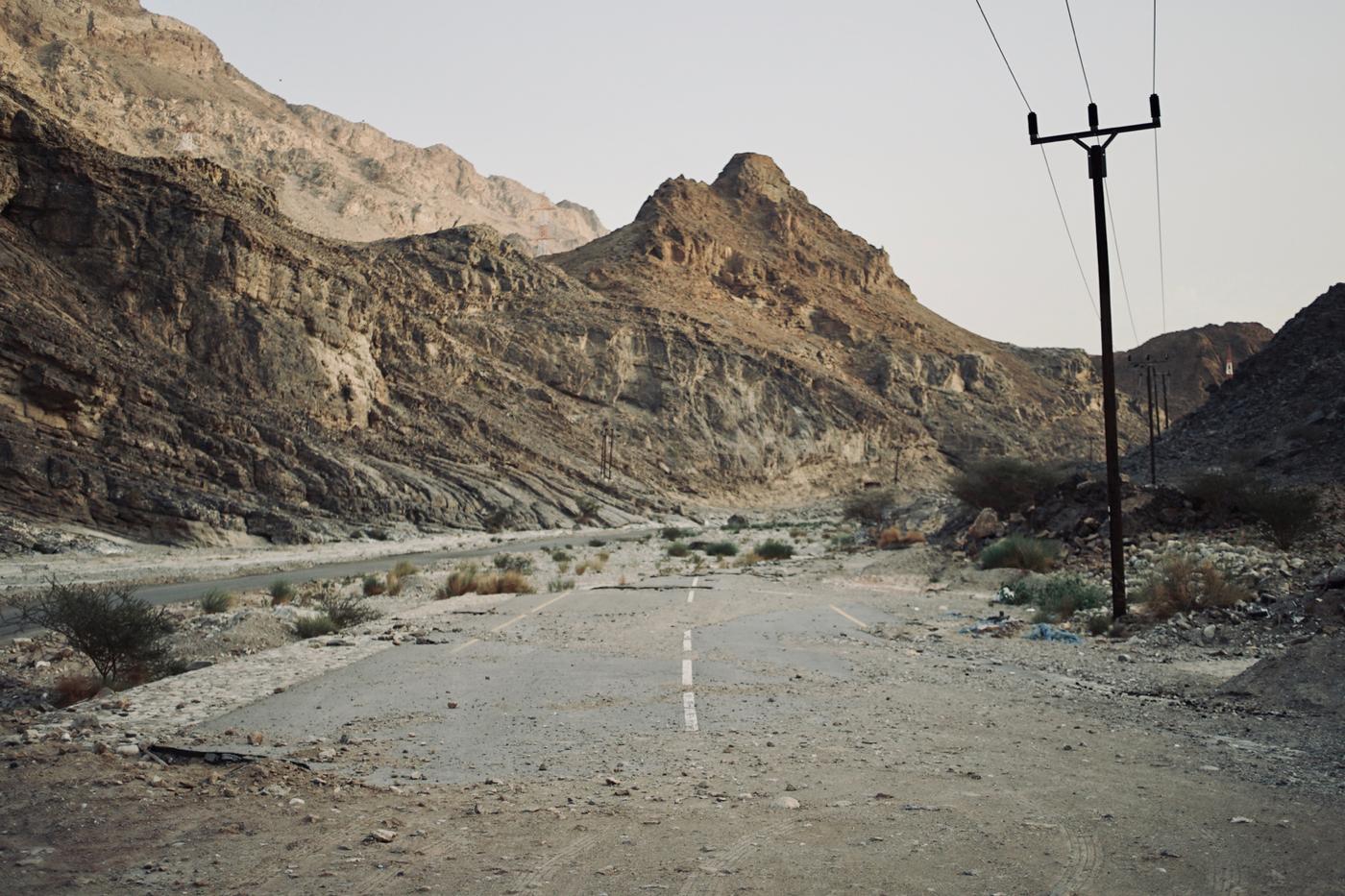 The following account is from the ultraendurance race across the Oman desert, BikingMan Oman.

”You gotta get the high highs and the low lows and realize what’s going on. To do well in those races, it’s all about management, Managing your bike and your equipment, managing your nutrition, your hydration, managing your body and managing your head (… ) It messes with you ” Josh Ibbett.

40 hours straight on a bike can seem like a long time, but it’s actually ridiculously short to cover 1037 km with 7000 meters of elevation through the Desert of Oman.

“I was afraid of few things for my first race, all happened on the first day, getting lost, having a flat, crashing and hurting myself, breaking parts of my bike. Yet I had a wonderful day and I kept going. I walked 5 km after my crash, it was downhill and very fast, I landed ten meters away from my bike and had to collect everything that flew off it. At that point, when finding my bike with a broken saddle, twisted bent handlebars, no front light, and a broken fork, I never thought about the fact I would have to ride it like that another 650 km. I didn’t ever doubt that. It was the middle of the night, and what I learned is how to deal with this all by myself and then keep going.” Eleonora Balbi. 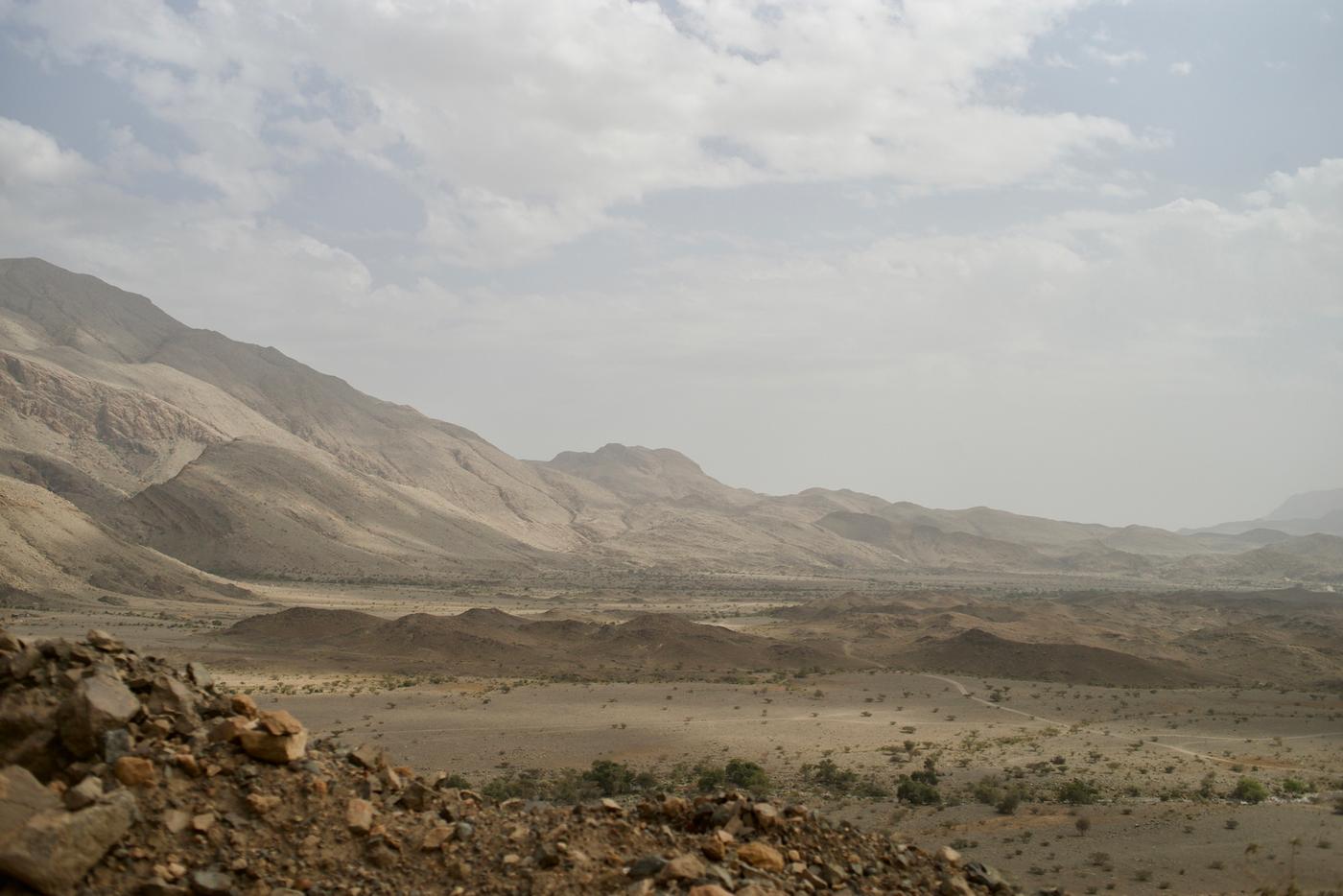 “The most powerful weapon I possess is the self-belief that if I slept for 20 minutes, this is enough for the next day and then I can make a difference.” Rodney Soncco 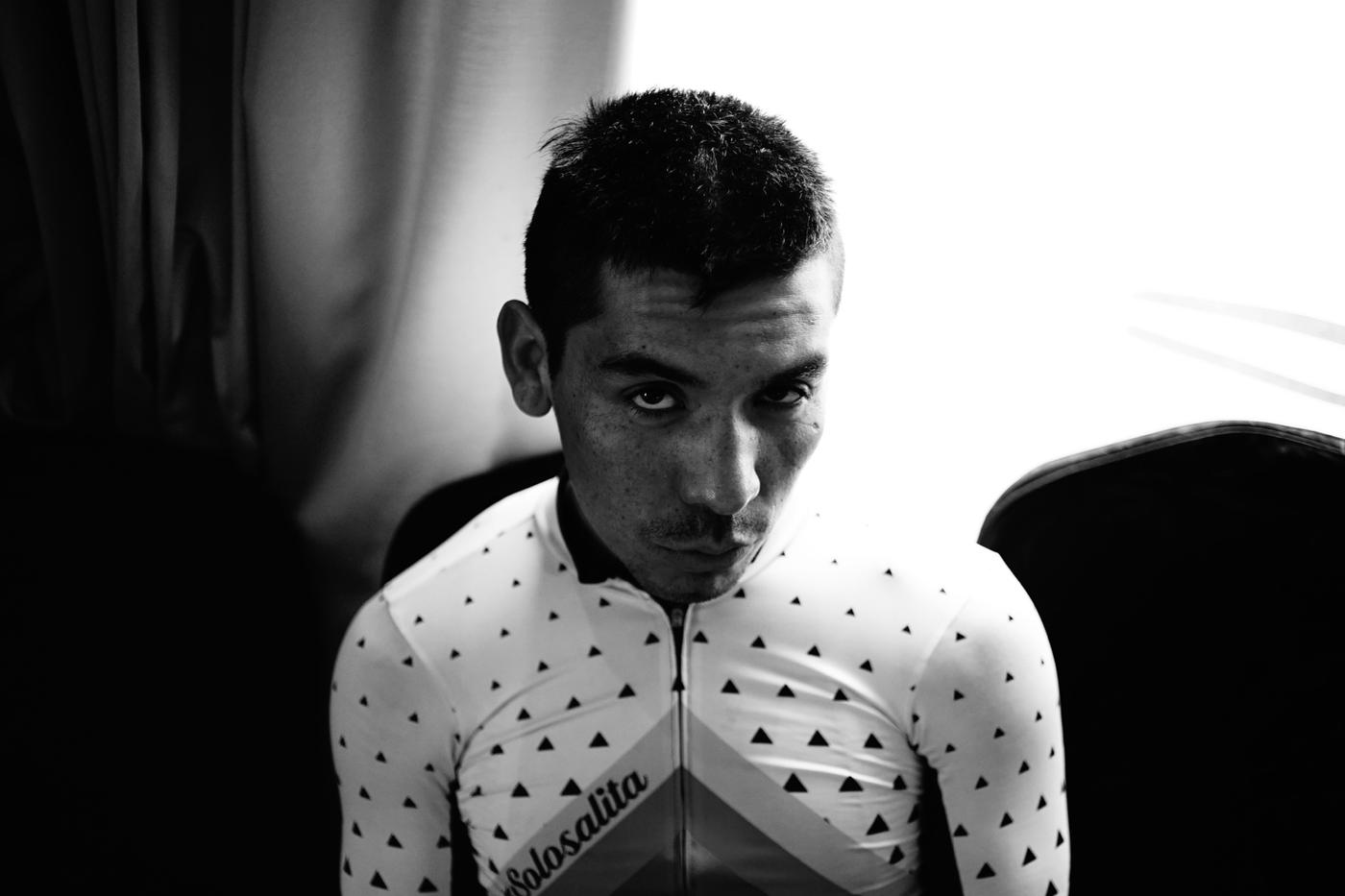 “In total, my ride took 42h 50m. From that, I spent 39h 00m on the bike. So I spent 3h 50m not moving. Of that, I slept for 45 minutes. The remaining approximately 3 hours I spent on time station, buying food, navigating. It´s surprisingly much, I think, especially considering I´m very focused on not keeping too long breaks. So there´s definitely room for improvements. I usually try to deal with sleep deprivation by either speeding up, start eating, chew chewing gum, sing, get off the bike to close my eyes for a few seconds, or I simply go to sleep.” Peter Sandholt. “I think the lack of sleep is the worst thing, these races are pretty uncivilised, although they’re really long races, they’re not that long, you can ride it in one hit and I was thinking about this a lot and I was thinking “do I enjoy this or not?” and I can’t really say because the thing that I really like from a personal point of view is to travel, and yes I do like racing and am very competitive but I really like to travel and seeing new places and the thing about an event that long is you don’t really have time for that, you just have to essentially suffer, you can’t really relax too much whereas on longer races you have time for a meal, you can sit half an hour, if you stop in a race like this, you’re losing time,

you can get in a dark place in your head if you’re not careful.” Josh Ibbett

“You can eat an elephant, bite by bite. Am so hungry I could eat two.” Jason Black 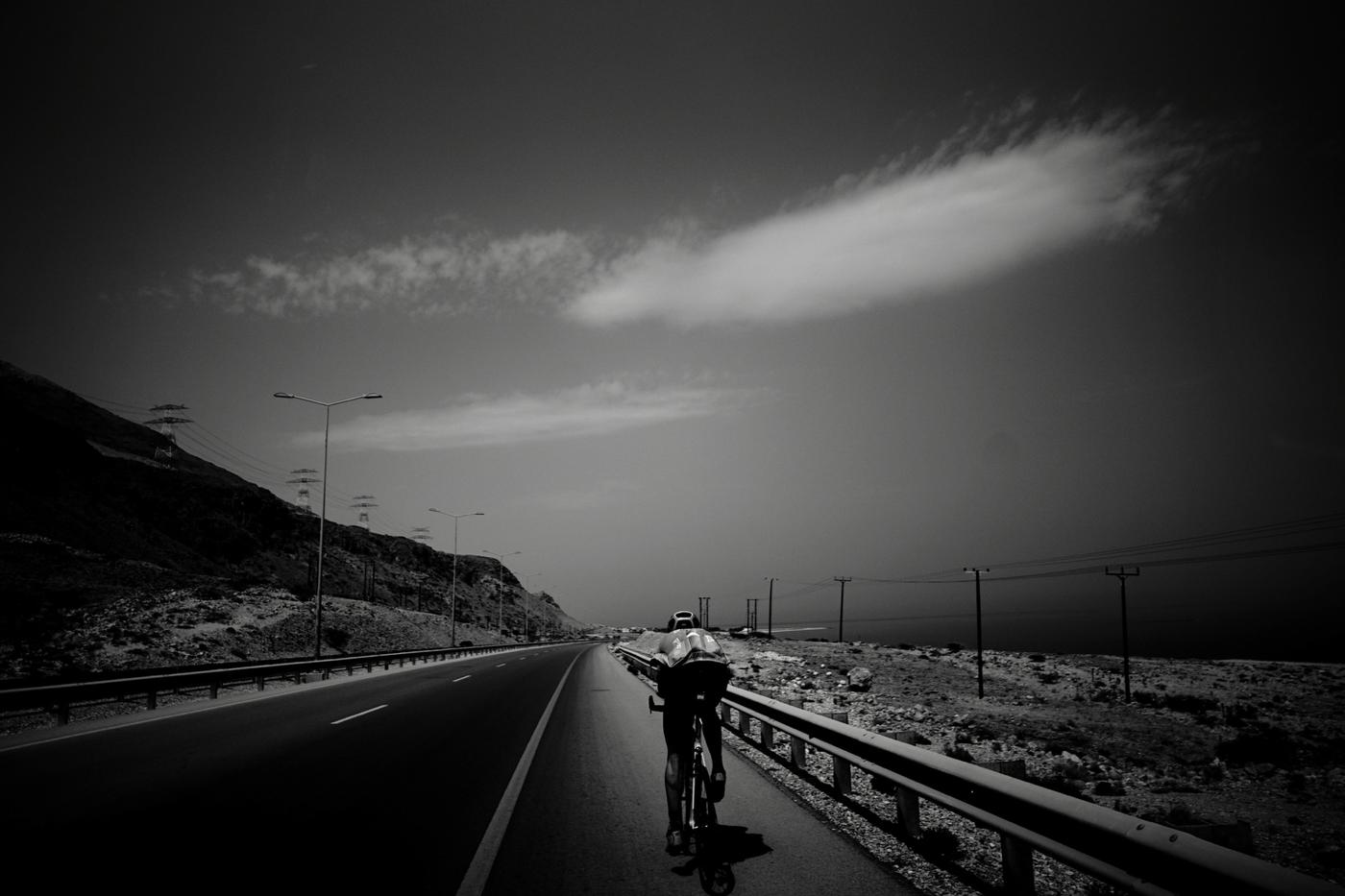 “The most relaxed I ever am is on a bike, specifically on a long ride or a multiple day rides. For me it feels natural, and I feel like it takes me back to some kind of primeval state, it feels like my being is doing what it was designed to do, going back to a cave mankind of attitude, where you have no fixed home, you’re always moving, you’re always foraging for food and trying to sleep, it just feels very normal. I guess it’s an escape, I guess these things are some form of escapism, it’s an escape from normal life but it feels very natural to me.” Josh Ibbett “Believe that you can do it. I wasn’t very public about what I was doing but I never doubted myself, I knew a hundred percent I would do it. You’re capable of anything if you put your mind to it. I only started cycling last October, I got a bike in December, my first bike, I got it for that and that’s when I really started training for this. But then I lost twenty days in January cause I was sick.” Dawn Barnable

“You can eat an elephant, bite by bite. Am so hungry I could have two!” Jason Black “I had no more front light also and that was a headache when riding at night. I had to find someone on the way that I could ride not far from and the guy I found was about to give up so I encouraged him, cause I didn’t wanna have to go to sleep or stop, he was really about to scratch but I pushed him a bit, he was happy I passed by and I needed a headlight even ten meters away from me, we both needed each other.” Eleonora Balbi

“The nice thing about these races is that you get a lot of camaraderies, because everyone is suffering together, it’s amazing how close you can get to someone in such a short amount of time, I’ve experienced it a few times, not even necessarily cause you’re riding together but being in the same race or having a mental battle with someone.” Josh Ibbett 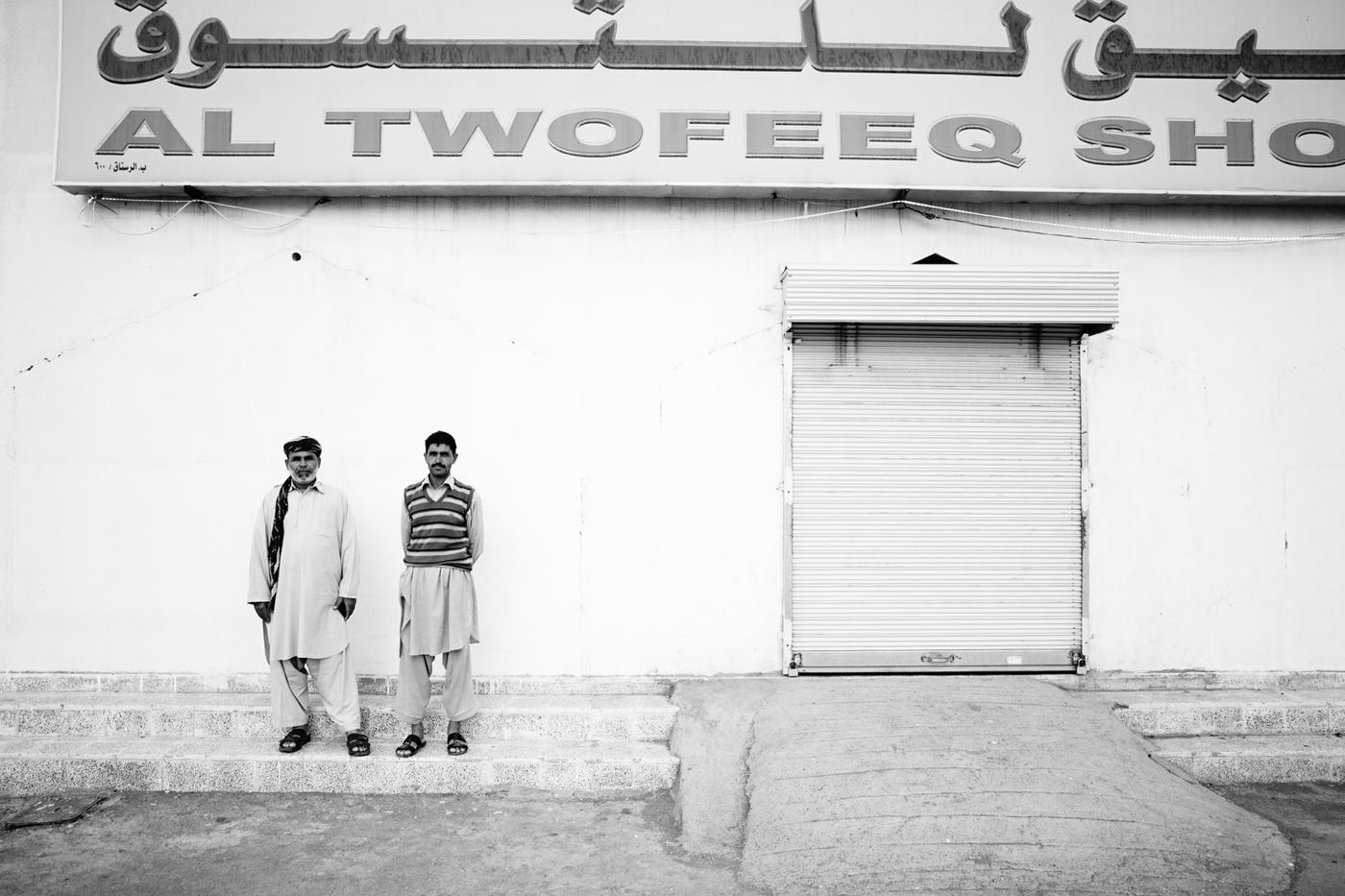 “I have just about as much admiration for the top ten as for the last guys, everyone will go through the same pain, the same effort but the ones a bit more at the back will suffer for a longer period and that, to me, is very impressing. It’s almost easier to do it fast, it’s quickly gone.” Josh Ibbett 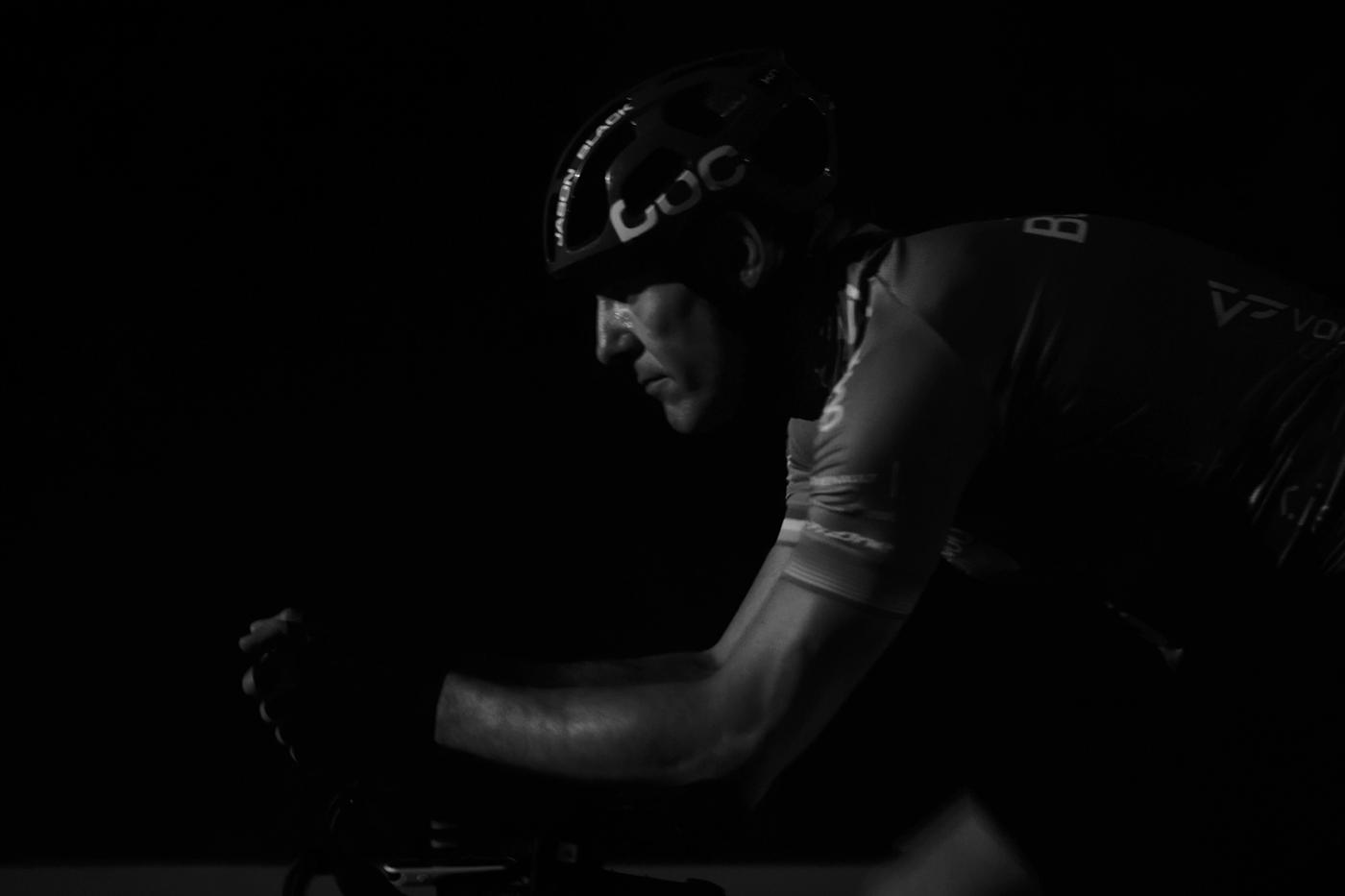 “I have pretty much all the sort of races you can do within ultra cycling: supported and unsupported races, long and short races, on and off-road races, 24-hour races. The BikingMan race differs a bit from most the other races I have done, which primarily have been long races; RAAM, TCR and Red Bull Trans Siberia Extreme. To me, it´s a big advantage the race being so short, simply because it means less time away from my family. I have always been dragged towards adventures, I am very competitive and I love riding my bike. So ultra-cycling really is a perfect combination. It gives me fulfillment of all these needs. It gives a contrast to my daily life, and it always gives a new perspective on my life. I always love going to the races, but I love going back to my normal life just as much. I become very grateful for my life when I do these races both for being able to do them and for my daily life. ” Peter Sandholt 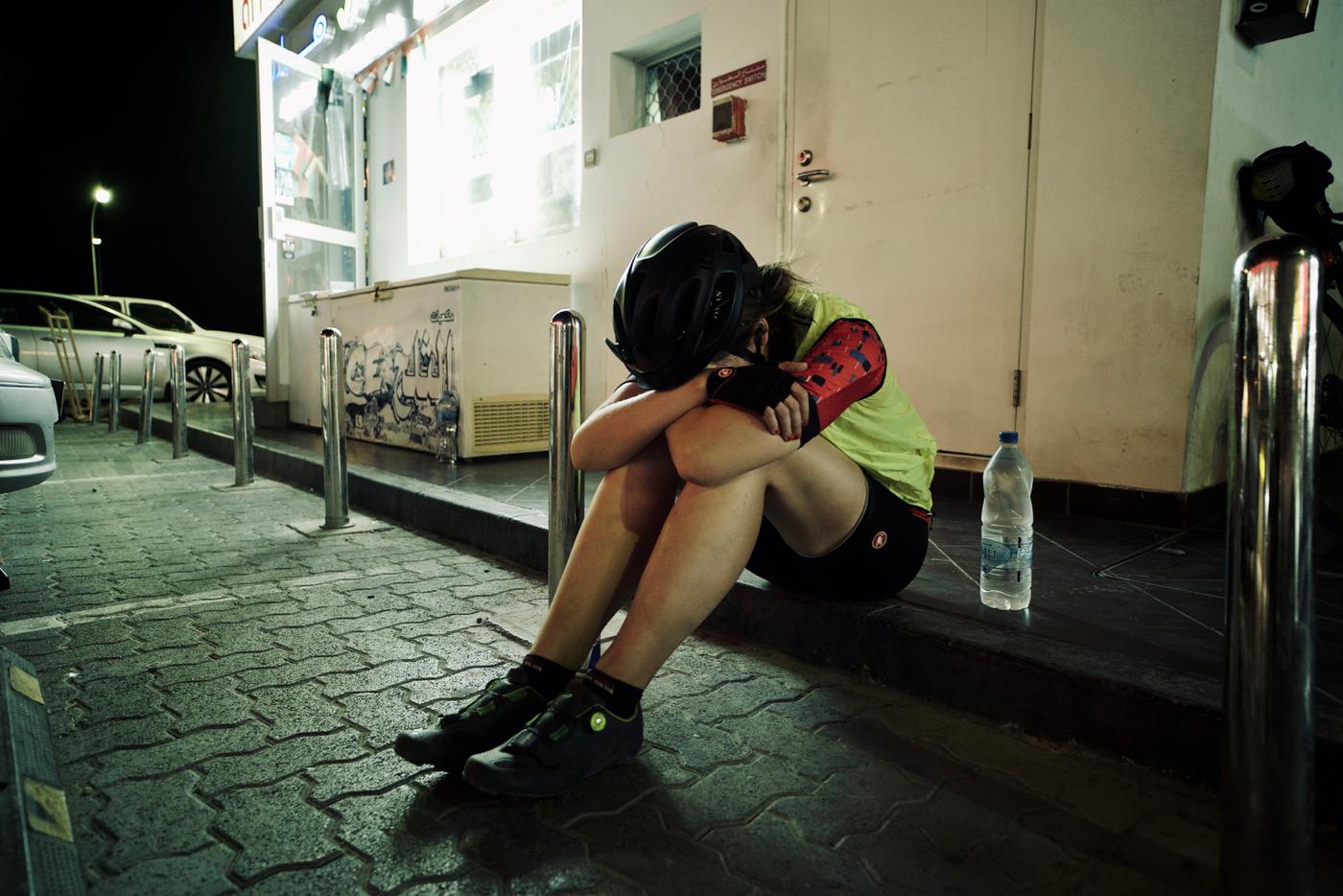 When you can sleep in a car park for five minutes while having a RedBull.
When you care so little how you could be perceived by anyone. Then you know, you re part of a strange and tight family. A bunch of looneys in the desert chasing time, sort of an escape plan, a constant rush, against the clock, the heat, the wind, your own limits, and all adversities. It’s a strange feeling to film someone so vulnerable and ripped out by the race, feeling like you’re stealing something, intruding, trespassing but when you know for sure that they re about to succeed, you think that shot, like what they felt, might stick with them forever, remind them what they can accomplish and overcome. And encourage others to dare just a little bit more. A lot of them first-timers might not know yet that they’ll get home a different day, a different way, a different soul, altered and upgraded, freed from the limits and conceptions they once took seriously. They might change job, change life, change attitude, Freedom is but a state of mind, no one will ever give it to you, you’ll have to find it on the way, yourself, and that there, to me, that sitting on a curb in the middle of nowhere, gathering enough strength to finish a 1000 km ride in the night, that looks like total freedom. Simple freedom, the freedom of not giving up, the freedom of simplicity, to just keep going for an unreasonable amount of time.