With the material post atop the Koppenberg, mechanics have to hoof it up the slimy cobbles just to get to the pits. 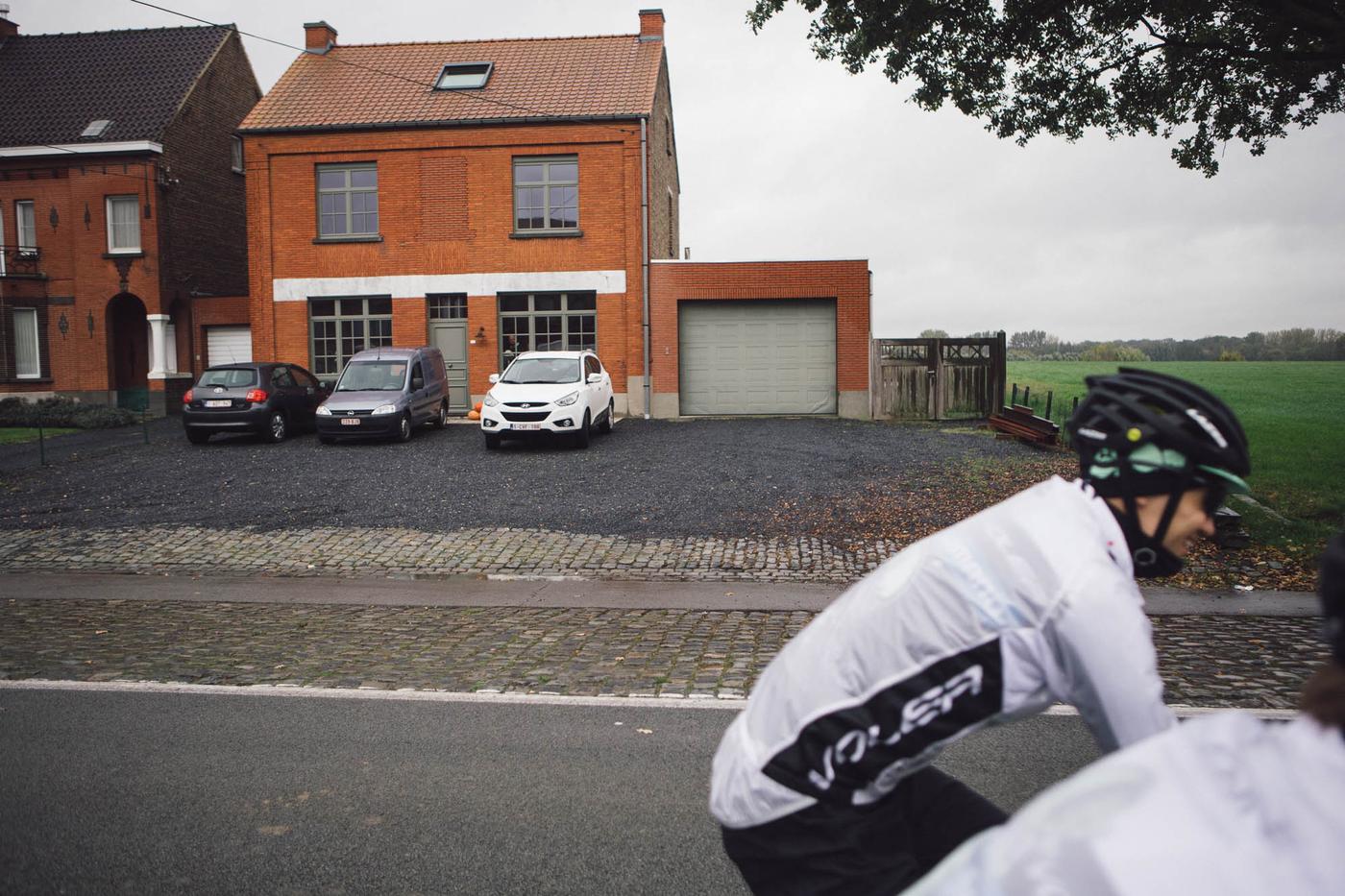 “Ah you get yourself a little parking Hitler, and there’s no hope.” Andy our team mechanic mutters as we swing around and crawl through the outskirts of Ruddervoorde, a modest sized town in the western most province of Flanders. We’re here for the third stop of the Superprestiege, one of the two major cyclocross race series in Belgium.

It’s raining as we pull onto the brick sidewalk, in front of the houses of this rural subdivision. Andy and Marek, the other team mechanic, pop up the tent and pull out a power washer, the generator to run it and our four race bikes. Meanwhile, I’m in the cab, performing front seat yoga to dress myself and stay warm and dry. The muddy bikes and bodies rolling past us indicate the normally fast and ripping course has become a classic West-Vlaanderen mud fest. 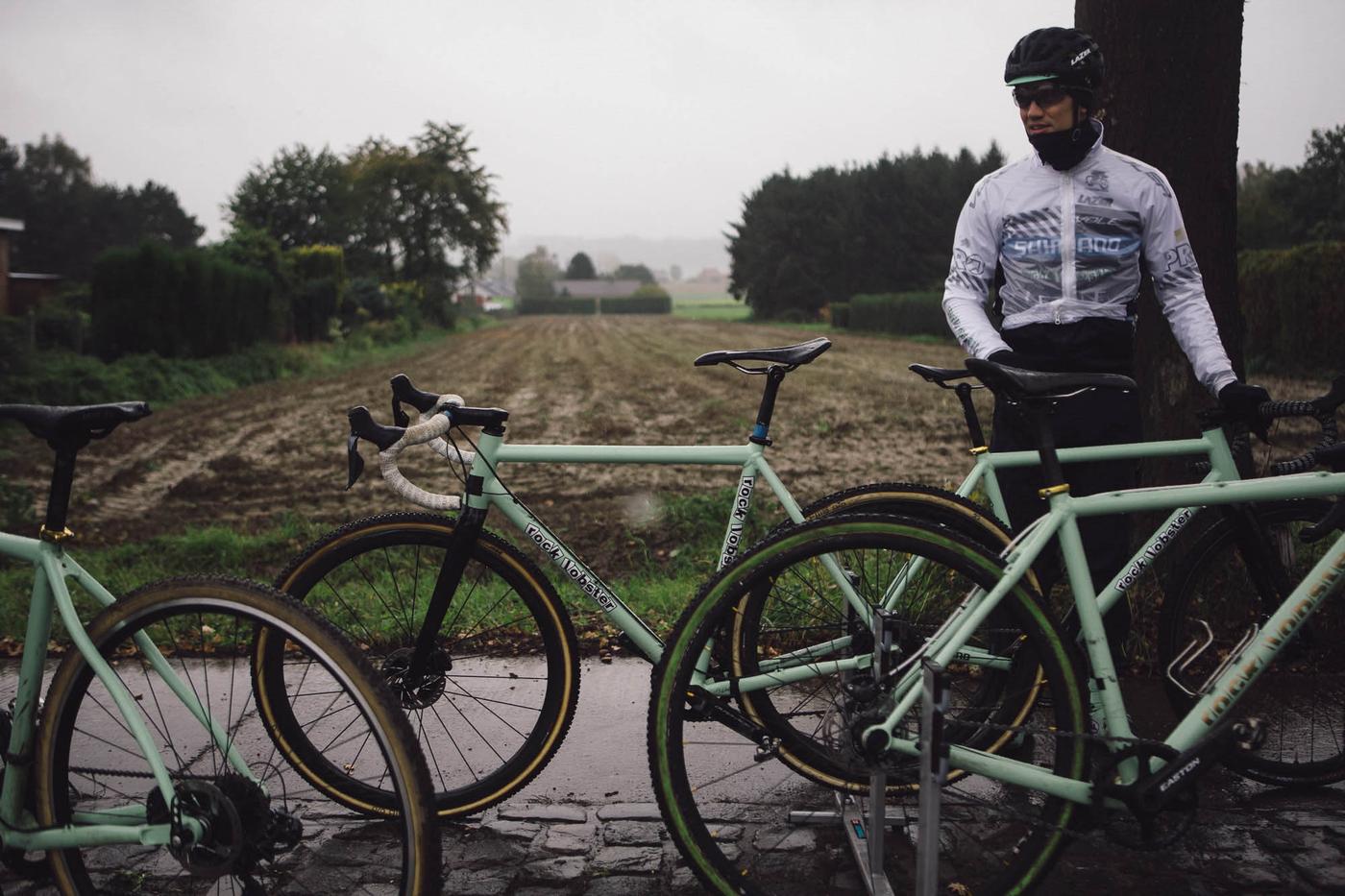 The filthy sights start nerves firing and suddenly I need a bathroom. Alas, there’s nary a nook or bush in sight, just rows of beige brick houses lining the streets. I’m resigned to the old take a knee to take a piss move, hunching next to the car, as the throngs of fans passed by.

Minutes later, a man emerges from the yellow house behind our car. He walks toward us. “I’ve really done it this time,” I think with remorse and shame. But he’s not wearing a reprimanding look. His white beard elongates his face, and his gold rim spectacles circle kind eyes. “Please, use our house if you need.” He says. “We have water outside if you need it. Come in and take a hot shower after the race. Use the toilet if you need too…” 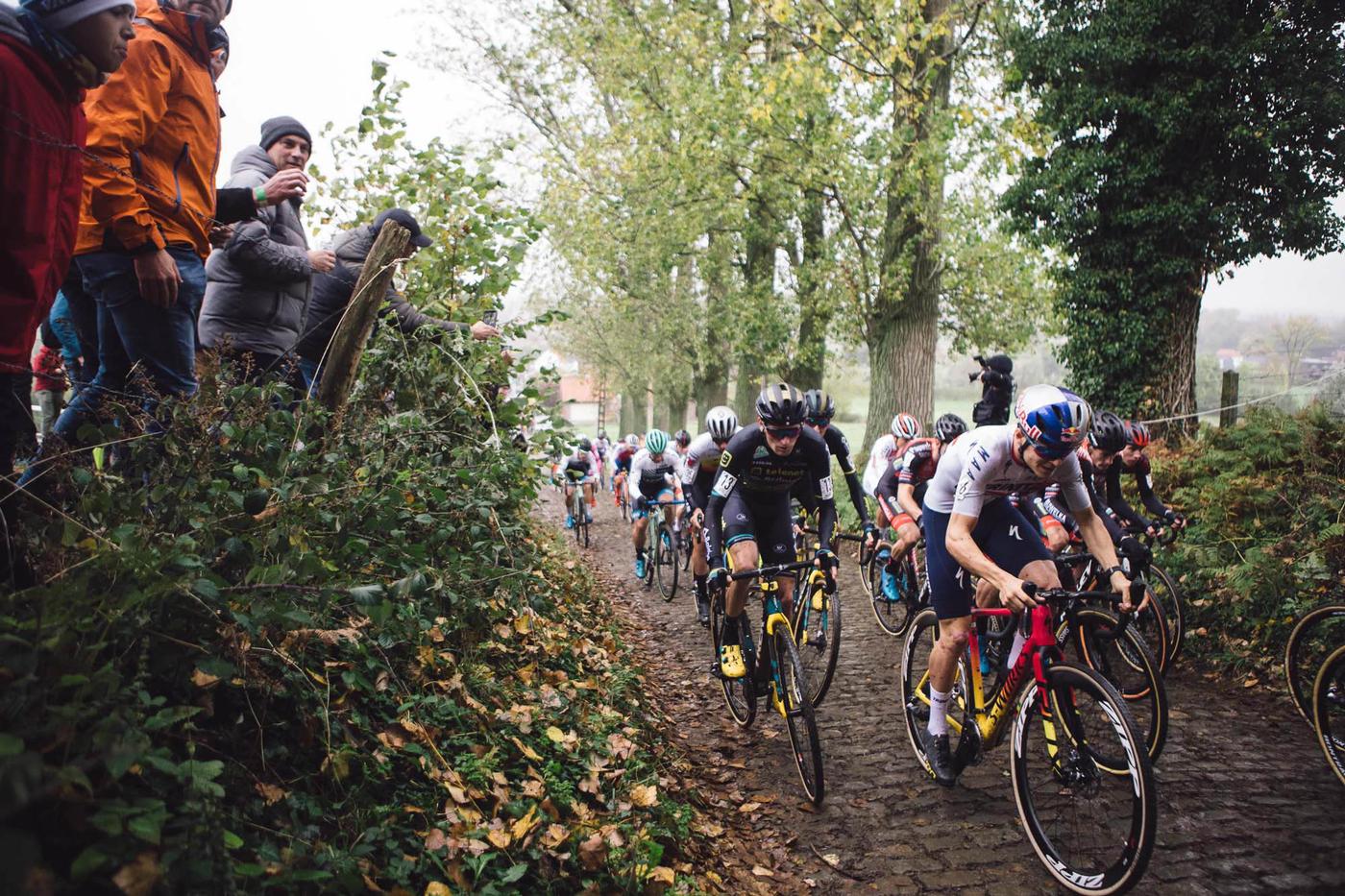 The thought of a warm shower makes it a little easier to slot into the start grid. The rain had passed but the pasture had churned into a soupy pulp from the earlier junior and women’s races. The 72-man elite field blasts down the start straight and argy barges its way through the opening lap. The Ruddervoorde course is little more than a slightly modified field in the middle of West Flanders. But the addition of some 20-foot mounds of dirt, a nasty uphill sandpit and several decades of high-caliber racing has transformed this otherwise mundane pasture into one of the most celebrated theaters in cyclocross. 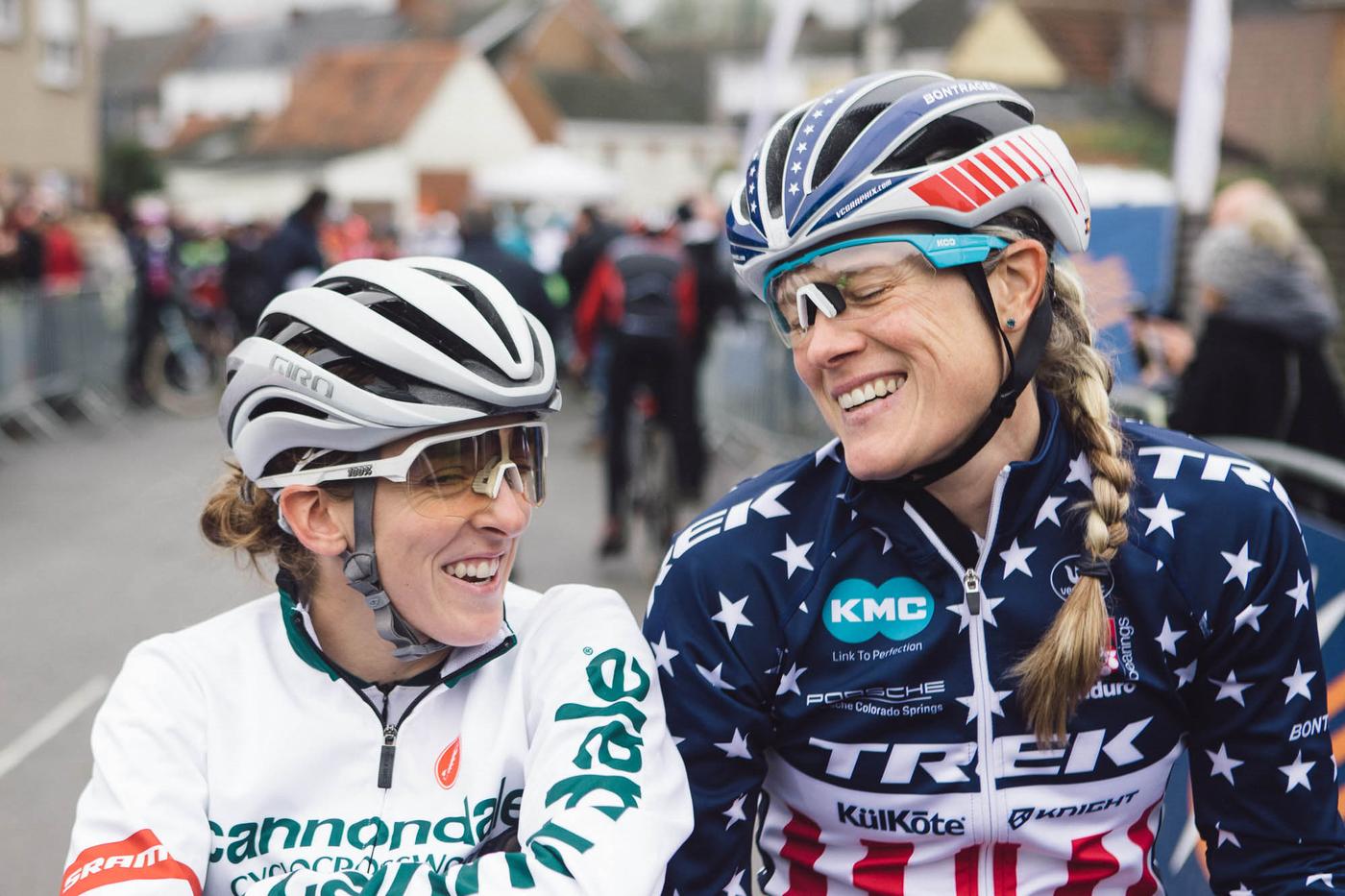 Mathieu van der Poel has chosen this West Flanders Classic to the kick off to his 2019-2020 CX campaign, after a heavy but successful summer of road and mountain bike racing. Despite his self-proclaimed inability to accelerate, he slowly pulls away from the field, to start his year atop the podium. Several laps before he triumphantly rolls across the line for his fourth consecutive victory in Ruddervoorde, Max and I are back at the car, stripping off browned skinsuits, cleaning off the mud before we wander into a stranger’s house. Just because someone loves watching cyclocross in their living room, doesn’t mean they want the filthy aftermath in there too. 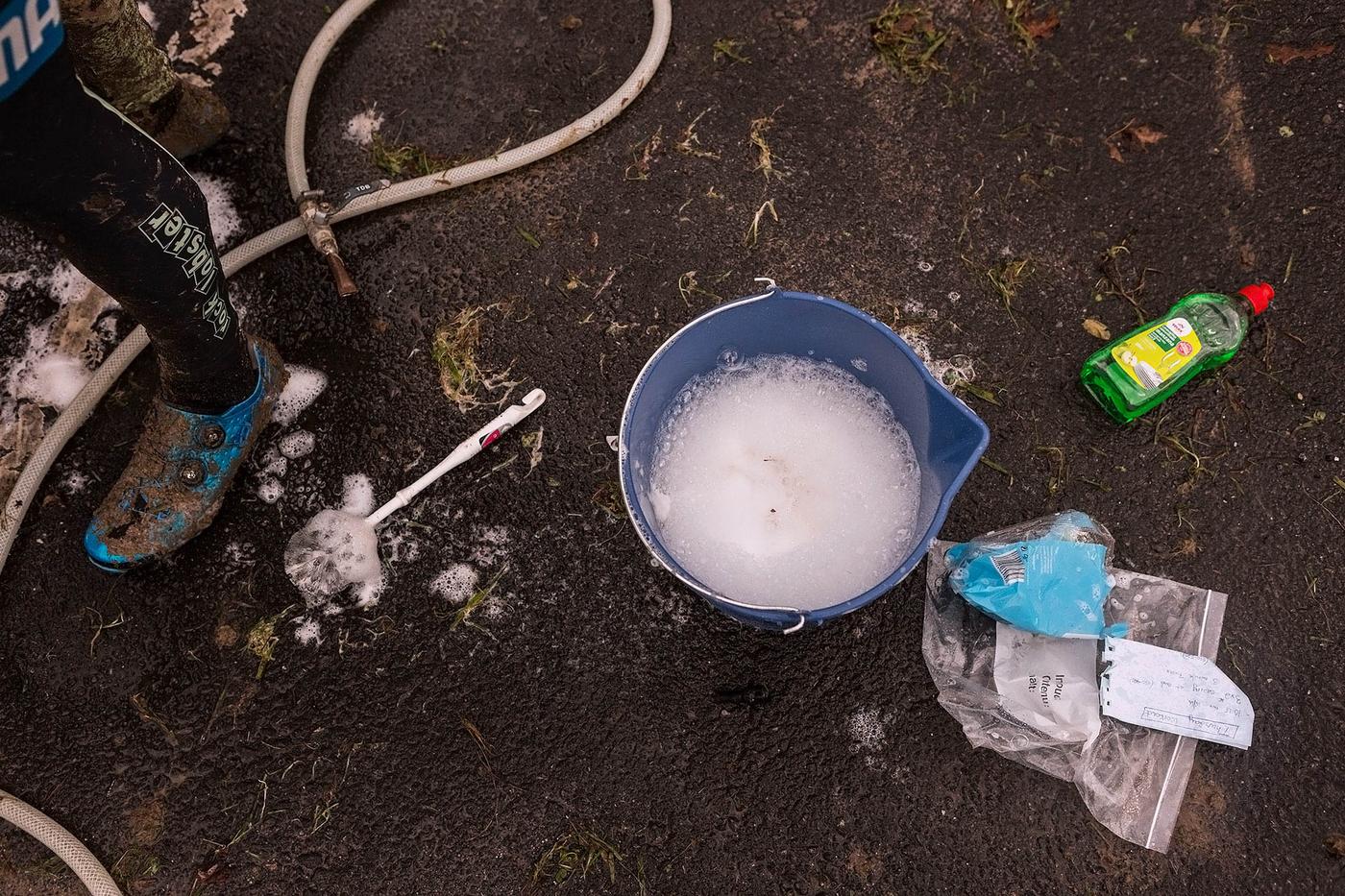 I ring the doorbell and wait. The sign below the doorbell reads “Rik and Sonja.” The door opens and a smiling, middle-aged brunette beckons me inside. Sonja. I follow her down the tiled hallway and she points me to the bathroom. In my seven-year cyclocross career, I’ve never had a warm shower to myself right after a race. Normally, I pull clothes over the race filth trying to stay warm. On the long drives home, the mud slowly cakes in my crevices. But not today. Today, as the warm water washes over me I feel like one of those cyclocross royals in their camper van castles.

Thoroughly scrubbed and dressed in warm toasty clothes, I wander into the kitchen. Sonja offers me a steaming cup of coffee as we sit at the kitchen table. I almost feel bad looking out the window at Marek and Andy washing the bikes. 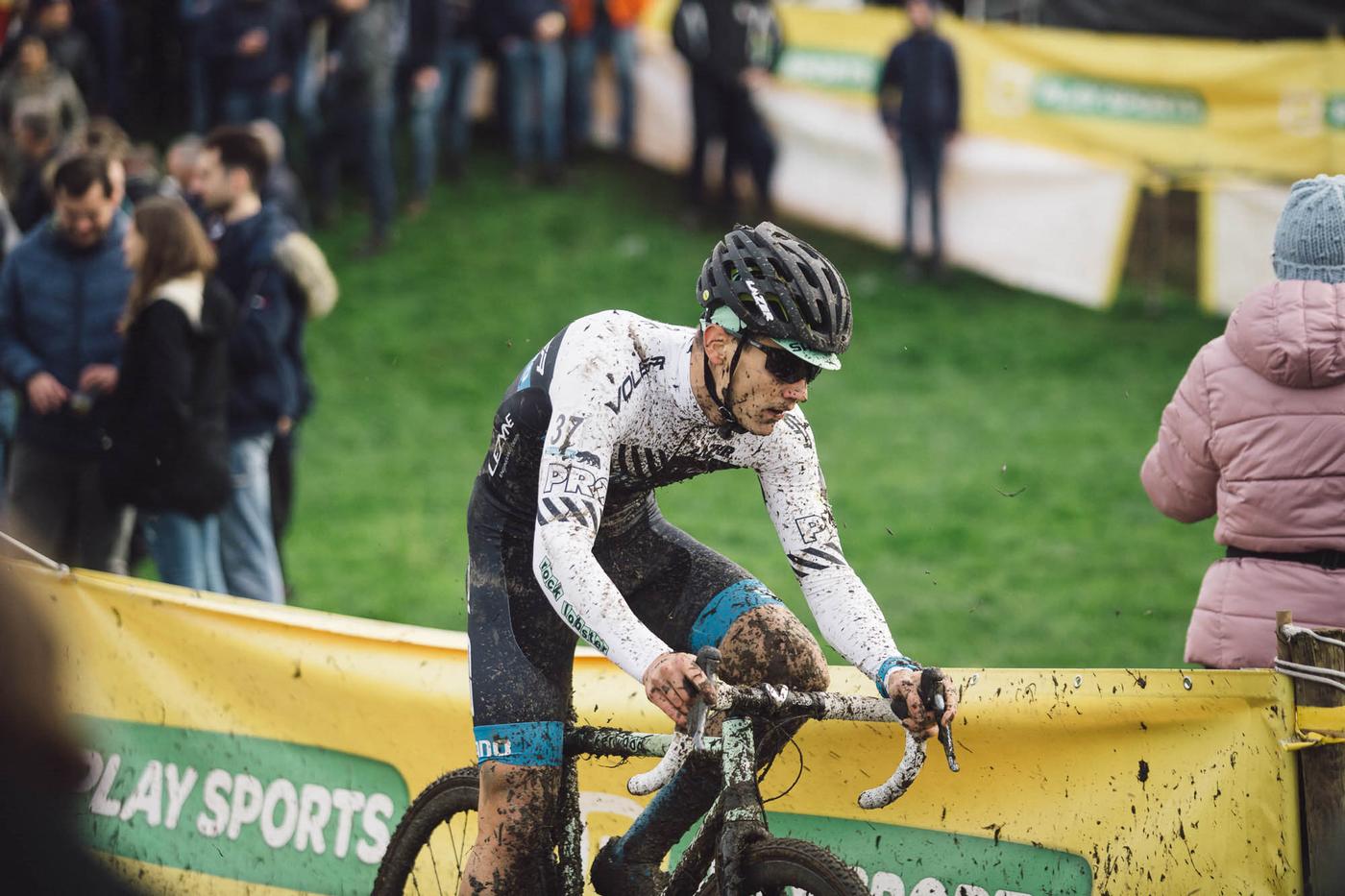 “She is the real cyclocross fan,” he says pointing at Sonja who beams in agreement. “I prefer the road racing, but every Saturday and Sunday, she’s in the living room, watching the cross.” Sonja doesn’t speak English but seems to understand what we’re saying. Occasionally, she chimes in in Flemish and Rik translates.

Max has emerged from the shower, and joins us at the kitchen table with a hot cup of coffee.

“When are your next races?” He pulls down the Het Nieuwsblad Veldrijde Guide, the annual cyclocross program put out by the Belgian daily newspaper that has all the major cyclocross racers and events throughout the season. It lives on the shelf in the kitchen, next to the phone and cook books. “Are you guys in here?” he asks Max and I. we shake our heads no.

“Well not yet,” he adds with a hearty laugh. “Wait till the end of this season!” 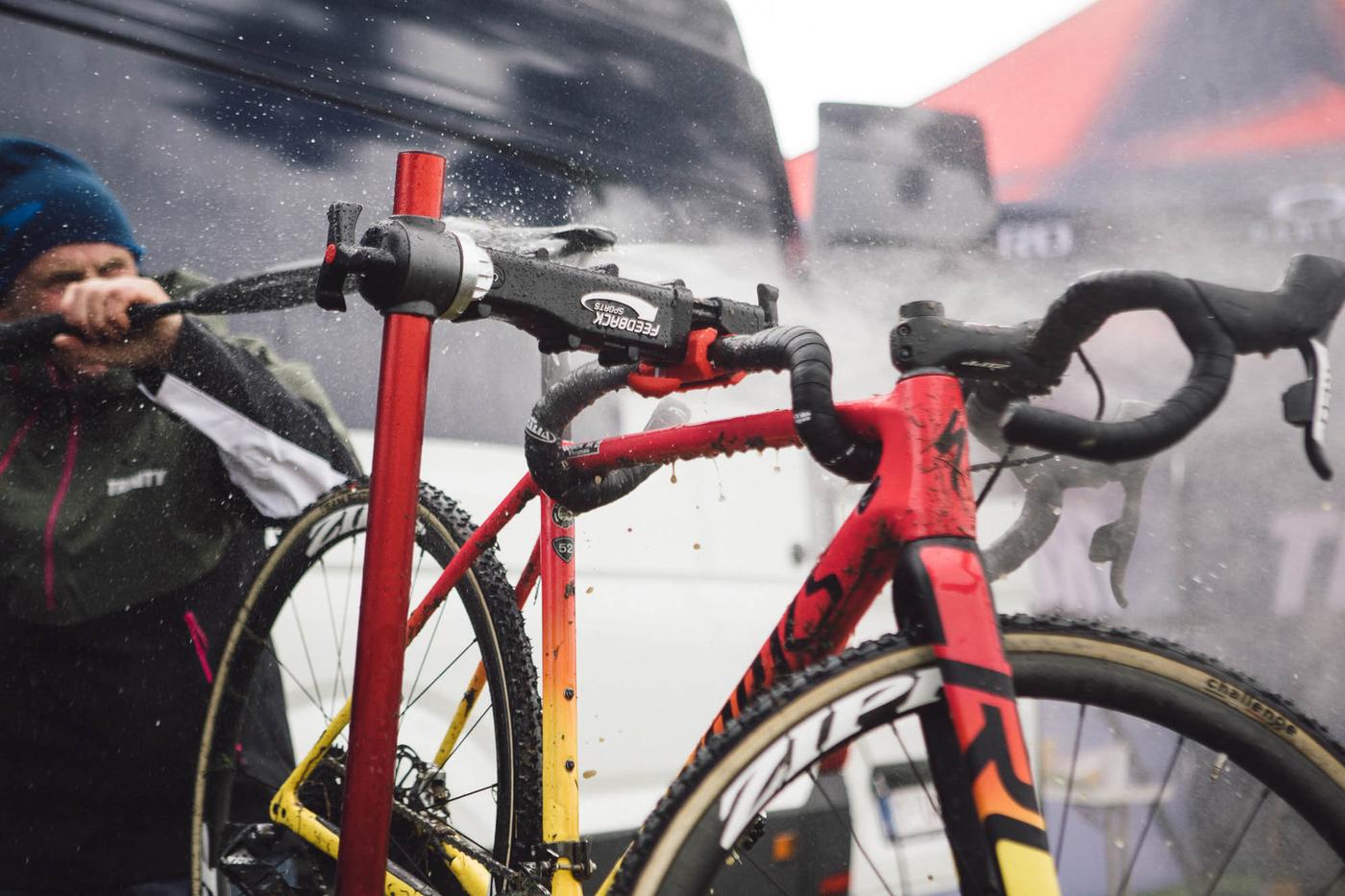 Rik points out the window to where Marek and Andy are still washing bikes. “25 years ago, Sven Nys parked right there. He had a car just like yours. A small van. Before he was big. This used to be a B Cross [a Belgian regional race instead of its current UCI international status],” Rik points out, “But Sven helped make it big. Just like cyclocross in Belgium. Now 25 years later, the Americans come and are sitting in our kitchen,” Rik says grinning.

I watch the camper vans roll by on their ways home. For so many years, I’d stood outside in the cold, longing to sit in one of those comfy vehicles of excess. But today, the small van had paid off. It had invoked the kindness, or pity, of strangers and here I was not in a cramped rolling living room. No I was enjoying the actual comforts and company of a home. 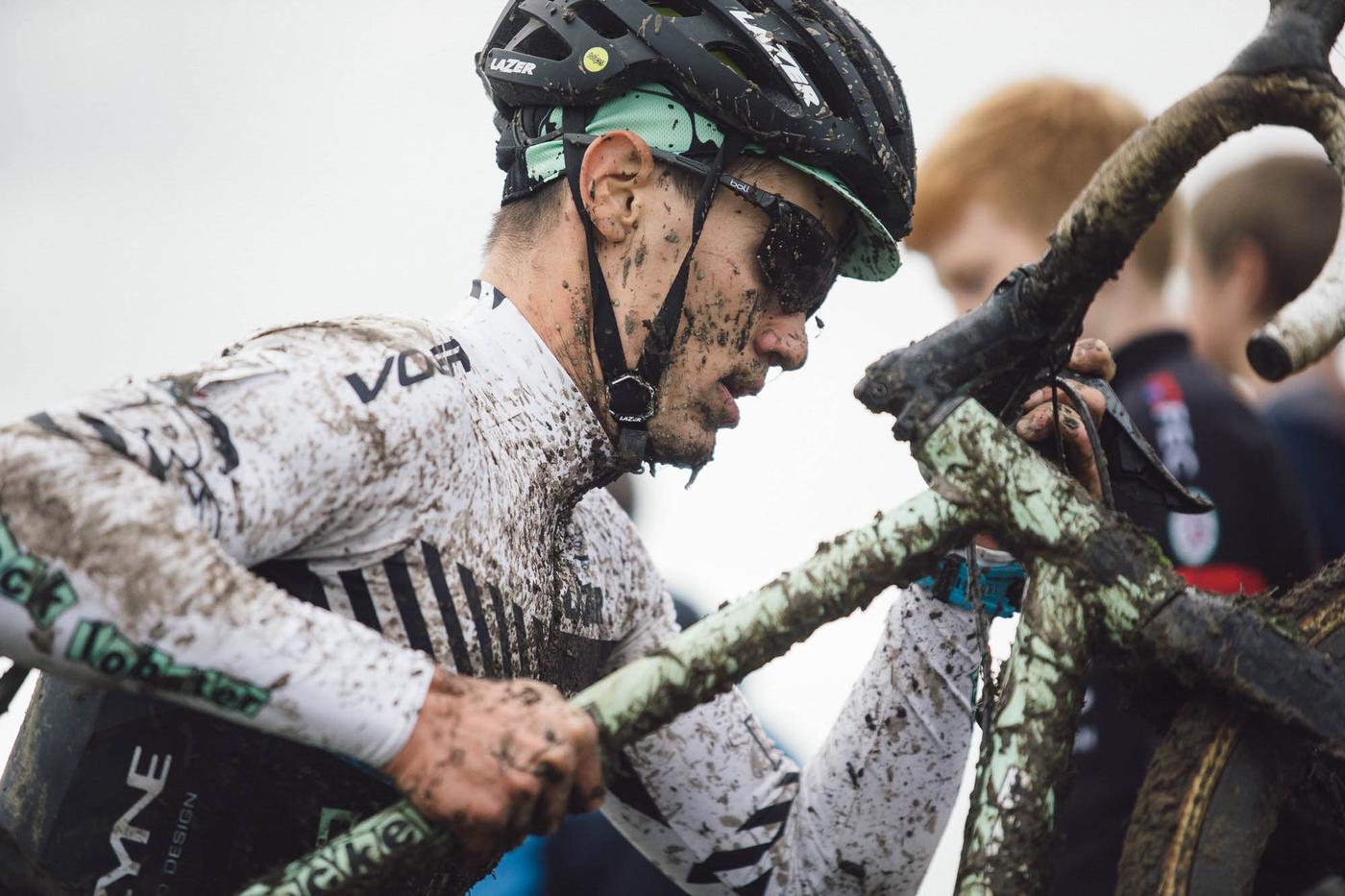 I hand Sonja a mud splattered number 37 and a still soggy cycling cap worn during the race. Max gives his 36 to Rik. They’re small thank yous for the impromptu Flemish hospitality. We walk to the door and they wave goodbye, Rik says, “Next year you come back, don’t park in the street. Park in the driveway and use the garage.”

I smile and climb into the car. As we pull away and I chuckle at our good fortune thinking, “Maybe I should pee on sidewalks more often…”