When I first heard the news that Box Components had branched over from BMX racing products to mountain bike componentry, I was eager to get some hands-on experience with their shifter, derailleur, and big-range cassette. A few weeks later, the Box rep visited Golden Saddle Cyclery and I was able to see it. Albeit not on a bike, so when Stinner Frameworks offered to build a review bike for me, built with Box, for NAHBS, I was stoked. I love riding and reviewing hardtails and since Stinner is one of the local builders in the Los Angeles area, I like helping him out when I can, particularly when it comes to mountain bike design. Aaron Stinner had been working on their Tunnel hardtail design over the past year. Previous versions popped up here on the site and with some feedback, he had finally moved closer to nailing down the official Stinner Frameworks hardtail. The team had two bikes on display at NAHBS this year, Kyle’s Grateful Shred 27.5+ and this Fuck Yeah Desert Tan 27.5″. I was excited to try it out, but I was also looking forward to putting miles in on Box Component and Magura’s latest offerings. 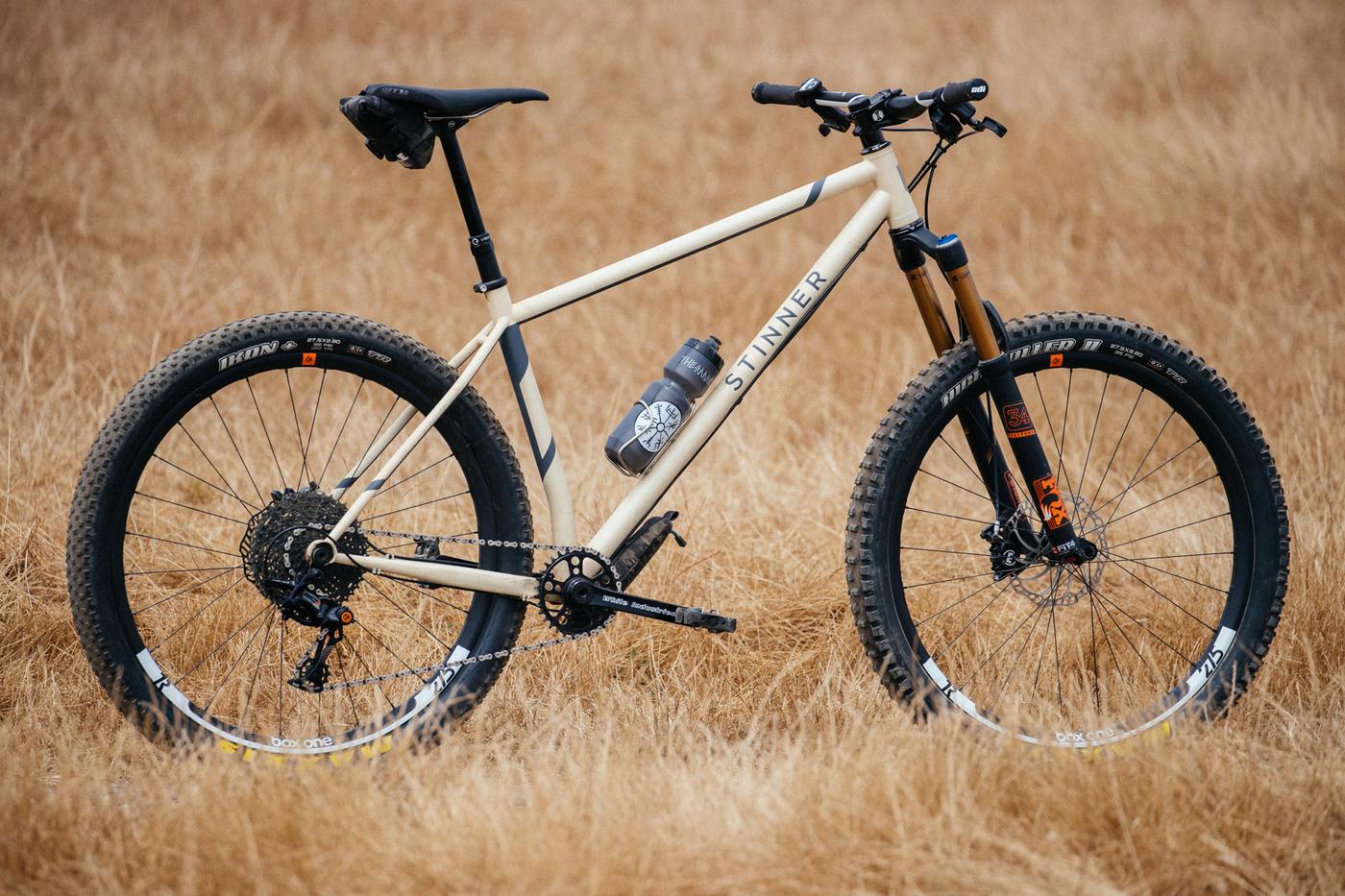 Long, slack and low. This bike has taken its cues from where modern day mountain bikes seem to be going. Although that said, there is a fine line between a bike that merely goes downhill fast, while maintaining control and a snappy, shreddy bike that’s fun all around. I like my bottom brackets to be around a 2.25″ drop, while the head angles to be around 67º on a long travel 27.5 bike. The Stinner comes in right at 2.25″ for the bb drop and a 66.5º head angle, with a 420mm chainstay, thanks to the bent seat tube. One note: Stinner will put a bottle cage on the seat tube if you’d like one, it just takes a bit of planning ahead.

Thanks to the Fox Float 34 140mm fork, tuning the front end is easy and for the rocky and steep trails we have in Southern California, dialing in the rebound on this tried and true platform was a cinch. While this bike’s geometry is similar to both my 44 Bikes Marauder and my Retrotec, it’s not nearly as stout. Thanks to the Stinner Select Tubing, this bike, in particular, is snappy and light on its feet. Which isn’t necessarily a bad or a good thing, just a noticeable difference. The biggest and most noticeable performance puzzle pieces, however, are thanks to the components. 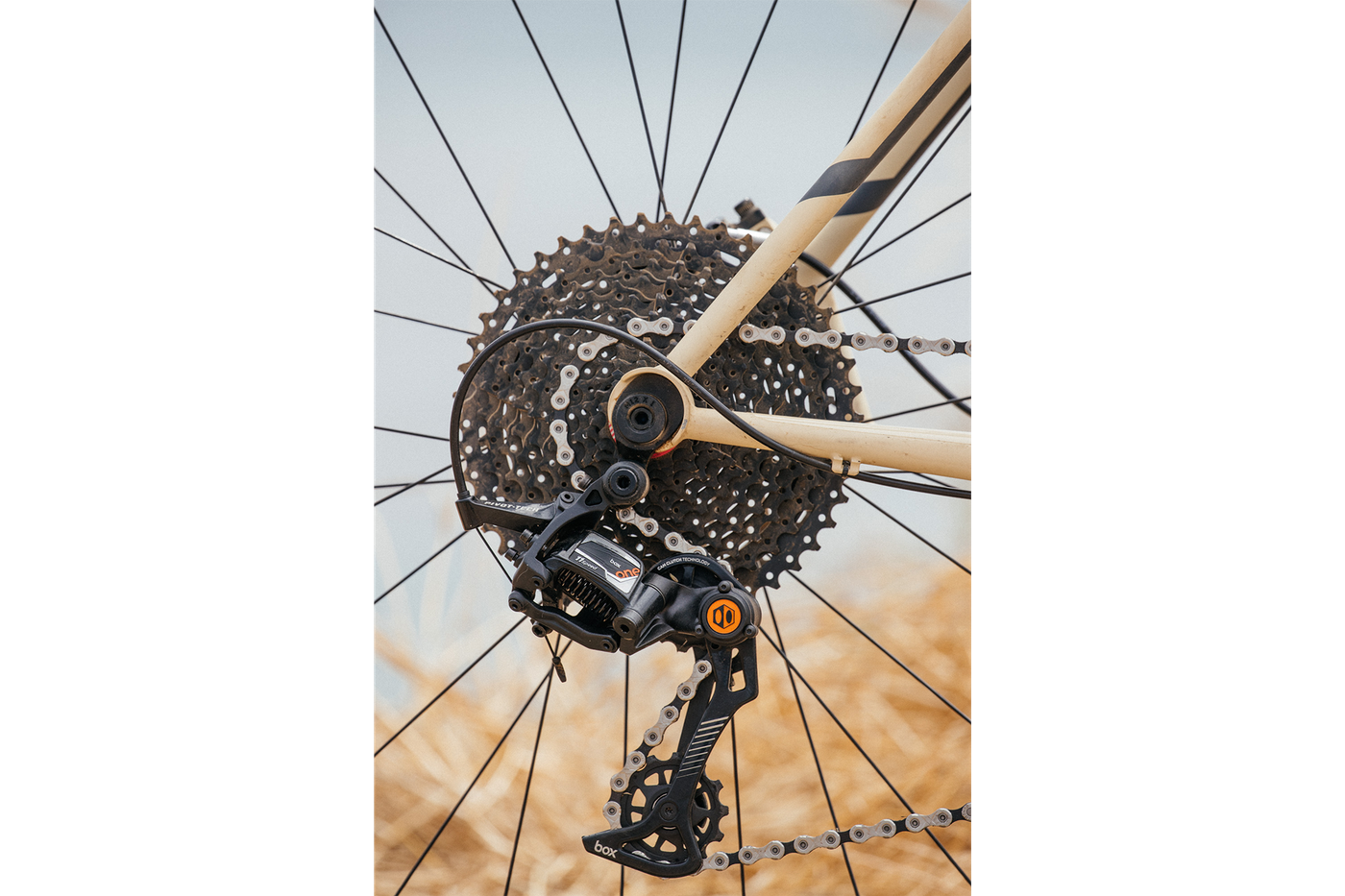 The .One. shifter and derailleur, paired with the .Two. 11-46 cassette make for a very well-equipped drivetrain offering. Yet, as you might have guessed, Box couldn’t simply copy SRAM or Shimano’s shifting mechanism, so they designed their own. You click in the Push Push lever to shift down, and push it inward with your thumb to shift up. From there, it’s up to the Pivot-tech derailleur and it’s surprisingly resilient clutch mechanism to shift while you’re bouncing around on the trail. I’ve found this setup to feel on par with GX or SLX (on a good day, maybe the modern XT is a better comparison), although one bummer is the lack of clutch switch or cage lockout, which comes in handy when swapping wheels or fiddling with a broken chain on the side of the trail… Overall, the Box Drivetrain will set ya back $175 USD for the derailleur and $75 USD for the shifter, with the cassette coming in at $99. Not as cheap as GX can be found on the market, but still a solid introductory MSRP from a company that just recently threw its hat in the MTB ring. 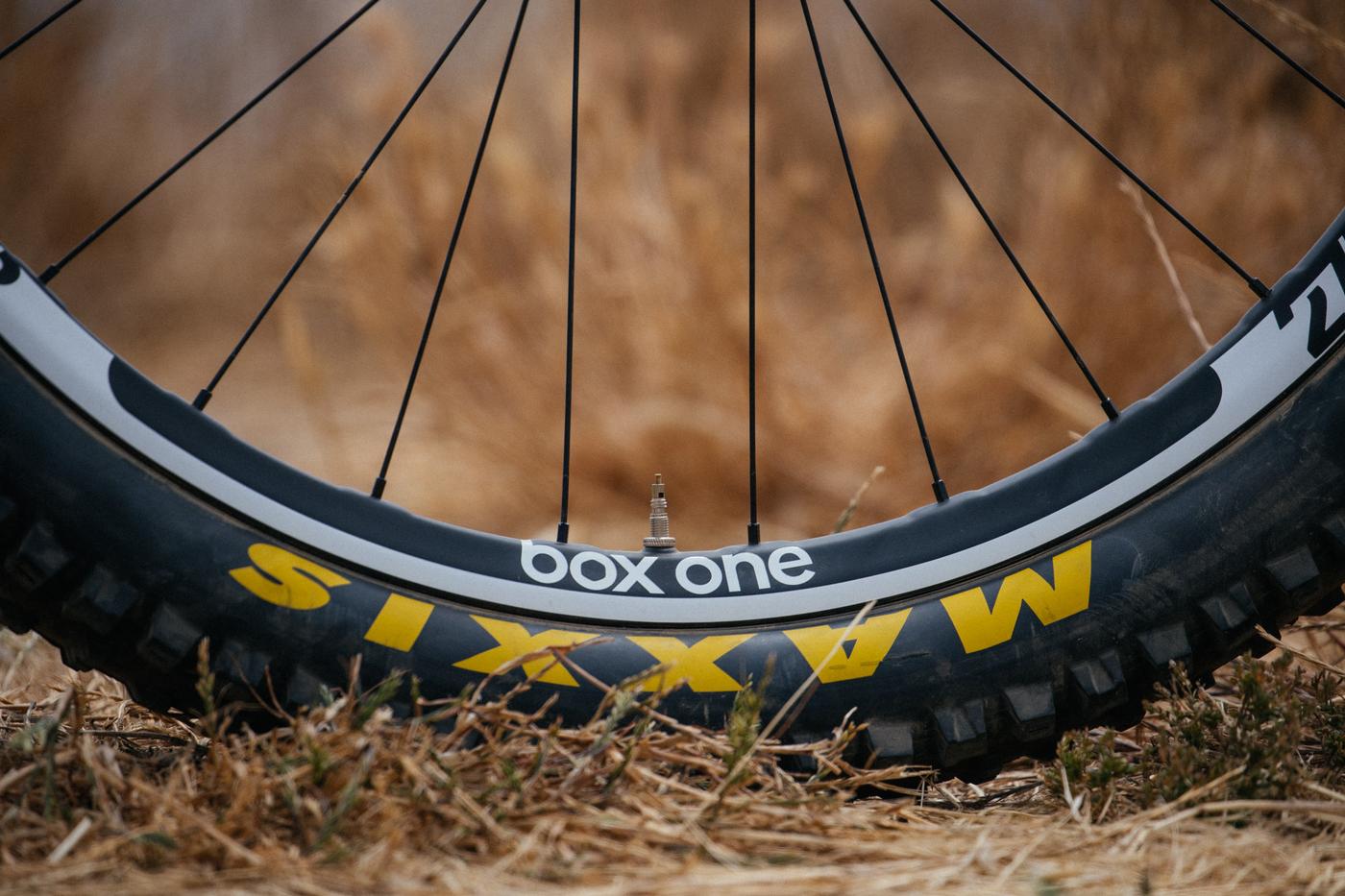 Carbon wheels make all the difference for me on a mountain bike, especially a hardtail, yet what I will admit, wholeheartedly is, wheels are painful to review. What I will say in the time I’ve had this bike, I’ve yet to run into any issue and they do look rather nice. Setting everything up tubeless was a cinch and while I was a bit nervous about the Sapim Race spokes, and 28h drilling they’re still true as ever, even with a few questionable rock garden lines. The Box One wheels are 24mm deep, 33mm wide and 24mm internal width. As for the hubs, the engagement was accurate and they aren’t overly loud, which is nice, considering I already ride with an awareness bell. The wheelset will set ya back around $1800.

If wheels are hard to review, stems are even harder. The 35mm clamp Cusp stem is made from 6061-T6 aluminum, comes in three lengths, and pulls in heavy design influence from Box’s already stout BMX race stem technology. The One DH bars are 800mm wide, 35mm clamp and feel amazing. Ultimately, there’s nothing new happening here with the cockpit, but it says something about a company that’s willing to design and manufacture a proper MTB kit. 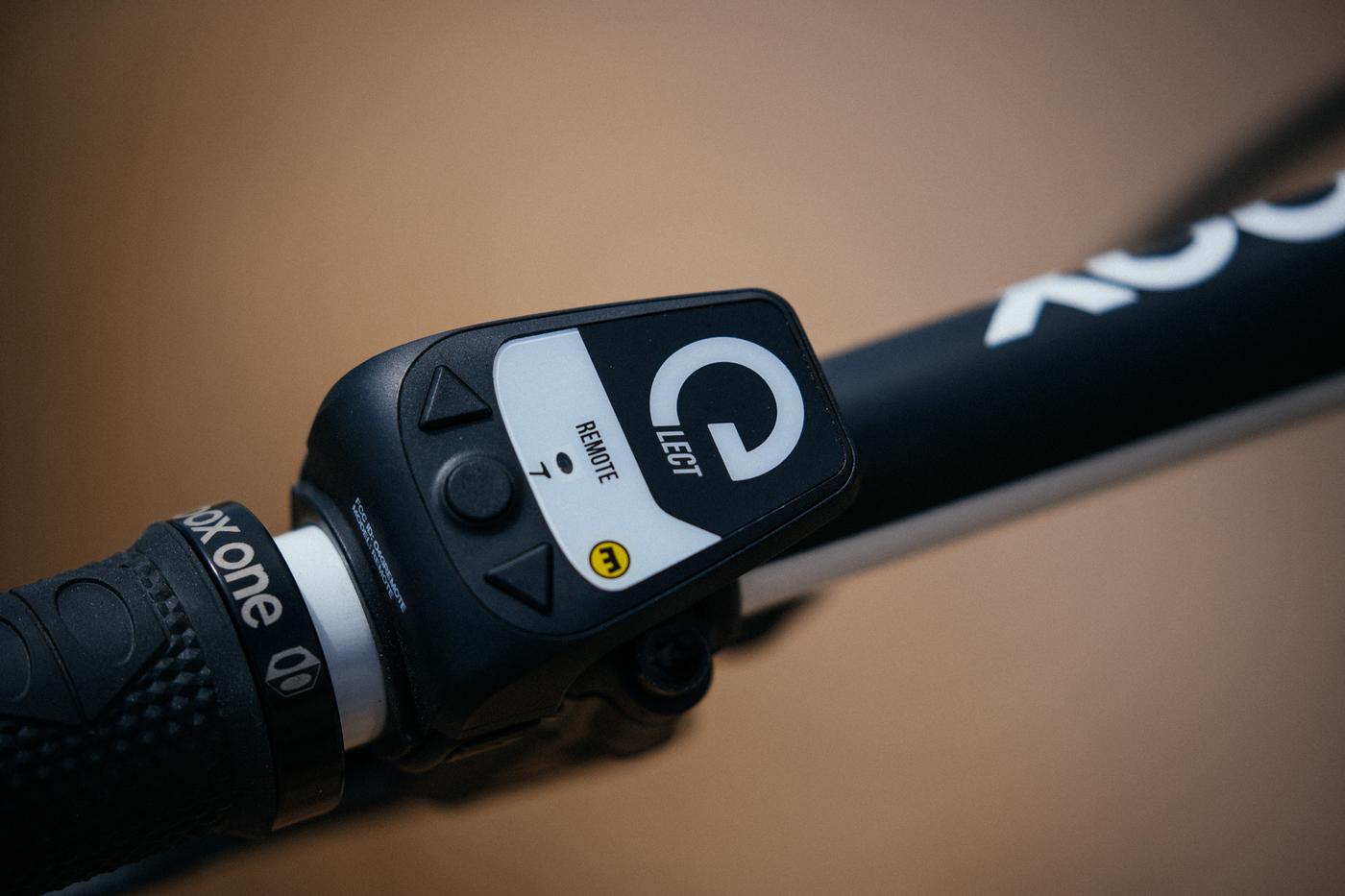 If I’m being completely honest here, the one piece of technology on this bike that just doesn’t do it for me is the Vyron Elect dropper by Magura. Gimmicks like this are painfully awkward their first production round. There’s a sufficient delay in the dropper remote, you’ve got to charge it multiple times in a month and the interface at the trigger is almost impossible to use while you’re riding fast over rocky terrain, if it’s raining, or if you have gloves on. To top it off, the head on the post loosened up enough to be an annoyance after the first ride. What I will say however, is this post isn’t for everyone, or for every bike. It is however for bikes that maybe don’t have dropper routing, or for people who want to use a dropper when they’re not racing XC. I’ll commend this attempt at a Bluetooth dropper, but this iteration leaves much to be desired. For $500, it’s a great option if you don’t want to deal with setting up a dropper, or having to rely on bleeding a line, but that’s a lotta coin to drop on a mechanism with less than desireable actuation. 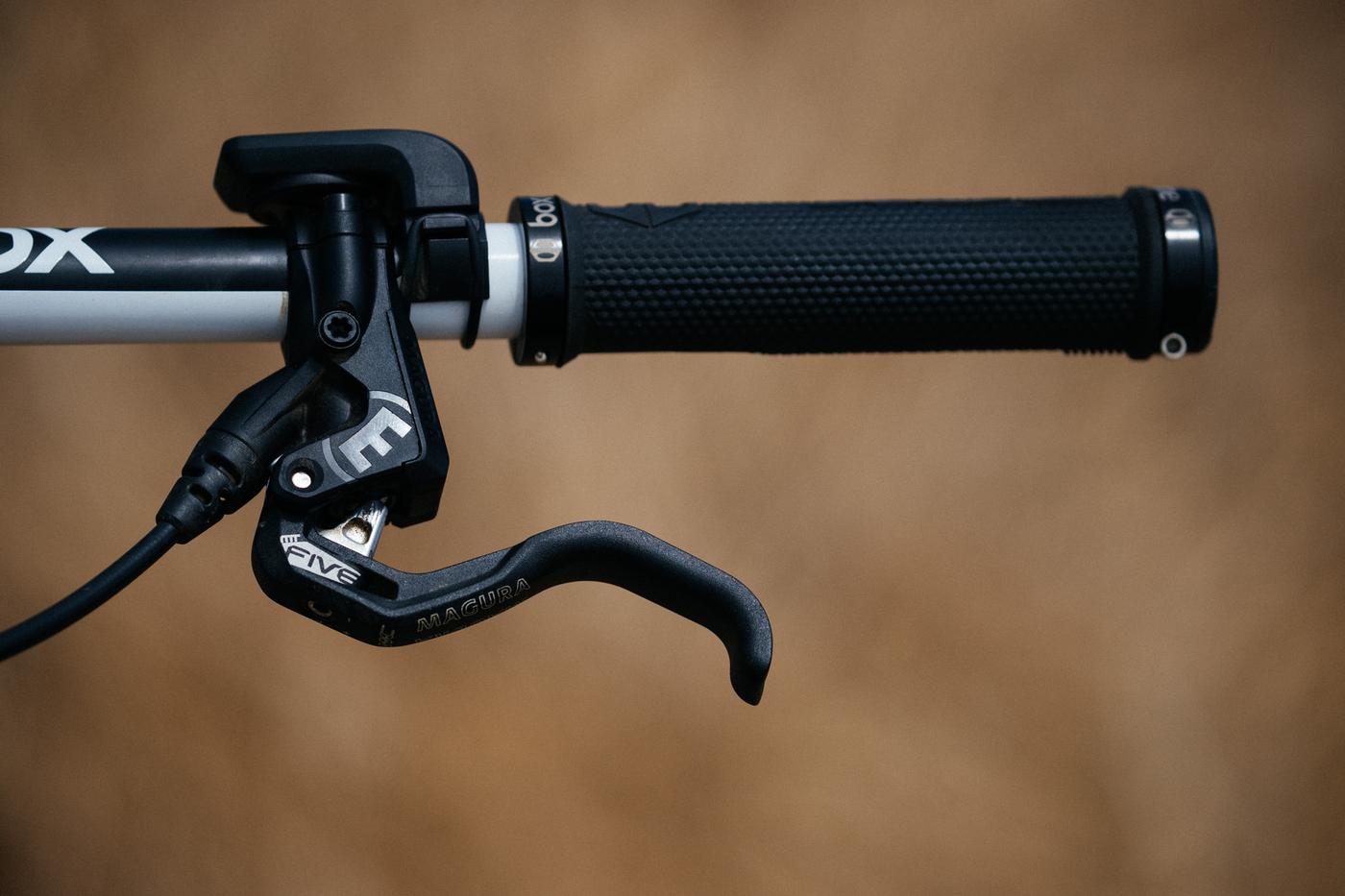 What a game changer. Having only spent a minimal amount of time on Magura brakes, I had no idea what to expect, especially coming off my first five minutes with the dropper post. The MT5 brakes, however, far exceeded my expectations. They use four pistons and have the best modulation I’ve ever experienced in a hydro brake. However, the most noticeable difference is the heat capacity. Most of the mountain riding here consists of an hour to two-hour climb, with 30 minutes to an hour of descending, allowing for little cooldown. I’m around 200lbs with my pack and camera gear on, with 180mm front and 160mm rear rotors and these brakes didn’t squeal once or give me any indication they were runnin’ hot. Best of all, I had no issues with them whatsoever in this demo period. Hats off to Magura for doing what they do best, designing kick-ass brakes that made riding this bike an enjoyable experience. 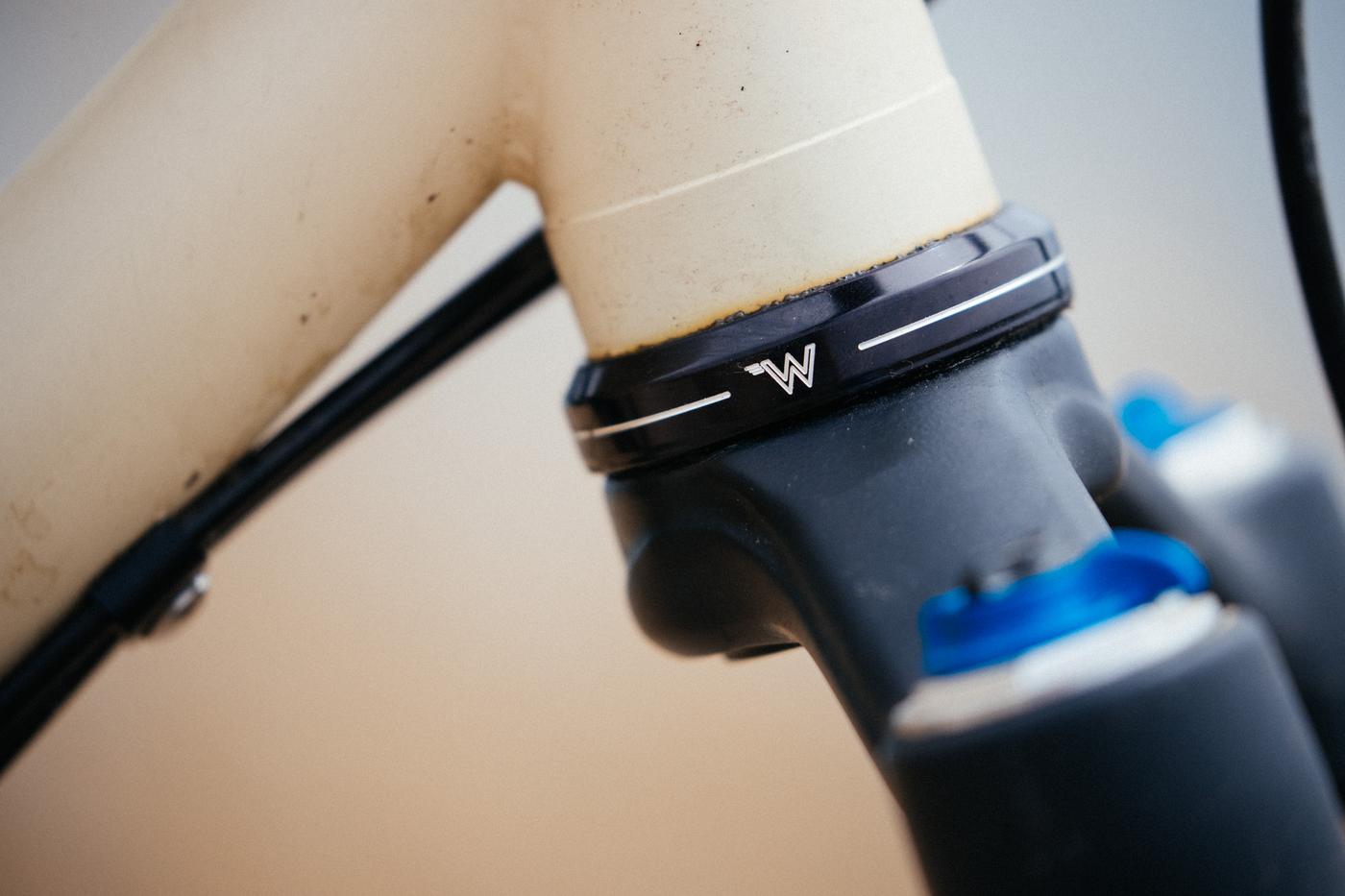 Hell yeah, White Industries. Thanks for making top-notch components in the USA! That is all. 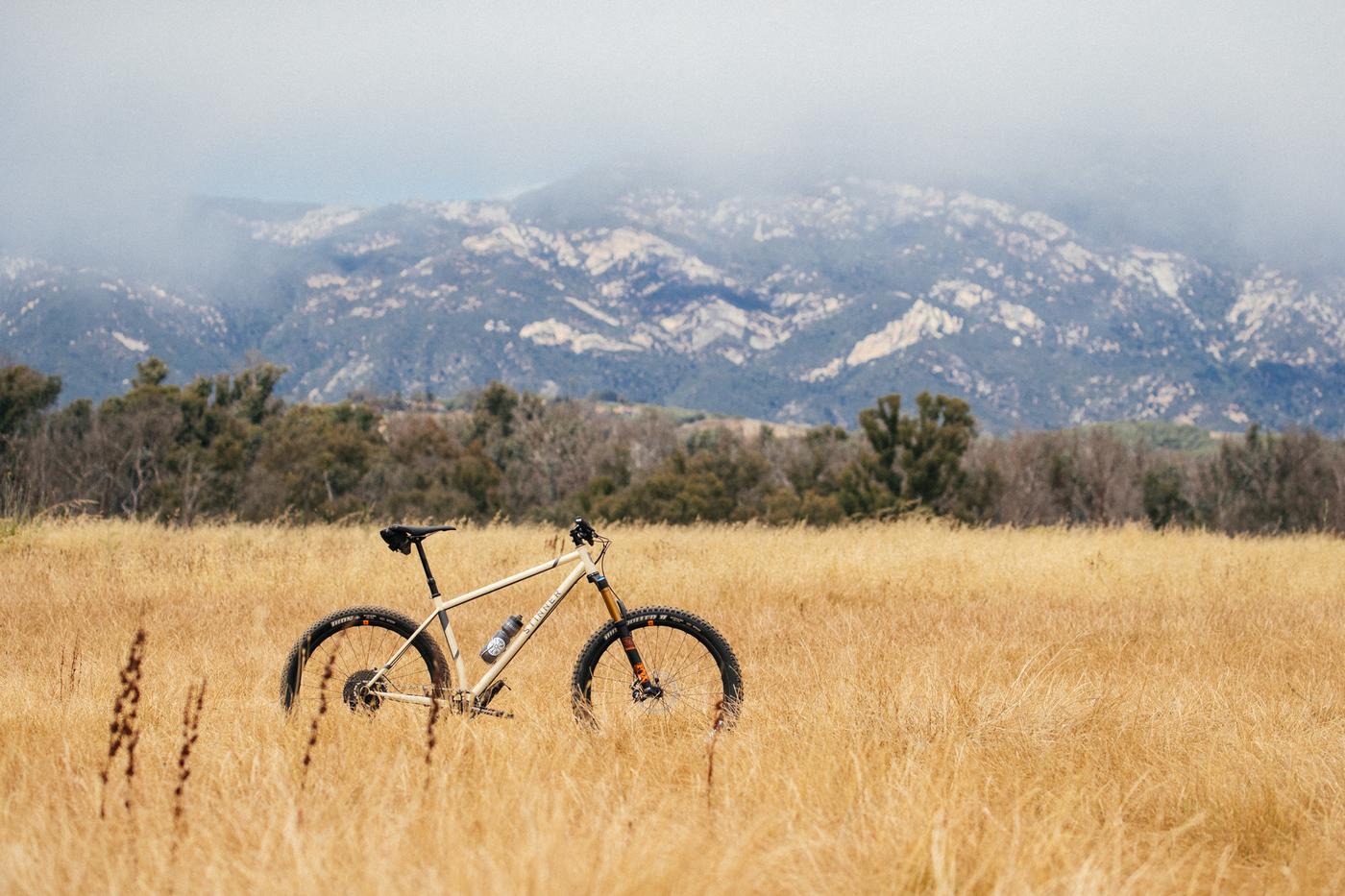 Born in Santa Barbara, but capable of all-mountain riding, the Stinner Frameworks Tunnel mountain bike is a super shreddy, confidence-inspiring machine. Their in-house paint team really does an amazing job on each frame that leaves the building and the construction is top notch. If you’re interested in a Tunnel frameset, simply holler at Stinner Frameworks and they’ll take it from there. The Tunnel will be in your hands 8 weeks after ordering and run $2,299 for a steel frame.