Deer and Wolves: Josh Ibbett on the GBDURO 2020 “I lost my way in races the last few years,
This has changed me,
I can race my bike a fair bit,
but the mental game here, it was so much more,
this has focused me,
now I know I can do it.
I had a bit of that at the end of Tour Divide last year
but it was too late after all that hiding in a lodge from bad weather.
This, now, this is what I needed to toughen up a bit.”

“I’ve been totally self-reliant for a whole week,
so it feels really strange even just being inside and using taps, going into a shop seems so weird right now, washing your hands, being able to shelter from the rain.”

“I’ve just been outside in the elements this whole time.
The hardest thing was when I got to a town,

I’d have to put my head down and go through it, not look at anything or anyone,  just ignore… well everything, get out of there ASAP, cause there’s too much temptation around. Yeah that must have been the hardest part.” Having to carry all your food and be self-sufficient, how tough was that?

“It was fine, I never thought the food thing would be a big issue, to be honest,

It made the bike heavier but people cross the Antarctic on their bike with and drag all their food for that trip or people go touring packing loads of things like hiking boots or laptops, so it’s not impossible to ride with loads of weight on your bike, and because it’s food here it’s only gonna get lighter and it’s only really heavy fro the first few days.”

But the rule also implies no contact whatsoever so you couldn’t even get to a shop and change your routine or indulge yourself with an ice cream or something out of your rehydrated food menu.

“That was the test really, and I needed it. Am still pissed off about Tour Divide last year, about the stay over in the Lodge and all of that…

(Last year during Tour Divide, Josh sat a snowstorm in, at Brush Mountain Lodge in Colorado, with other riders, the race was stalled, top riders decided to scratch, there was a few days of stillness and confusion before a few went back at it again and relaunched the race…)

So yeah it was a good test for me mentally to see if I can do it and resist the temptation that’s like swinging in front of you, I had to, I had no choice.” So, you are on your own and outside and outside is free but after a few days completely out, it must be taxing, with the UK weather but still all you do is only riding-eating-sleeping-riding, no human interaction at all, no time inside at all, there must be some cathartic feel there, how was your mental space, does it all turn into some kind of a tunnel?

“Exactly, it’s even easier in some respect because the distractions are smaller.

You just get in a routine.

Like all these races, Divide, TCR, it’s about getting in a routine, I wake up and eat breakfast at the same time, I have lunch at the same time, dinner at the same time and I try to snack regularly in between and you just ride so it’s just about making it normal so the new normal was taking your food out of your bags which is easy, cook it on the stove which is like super easy and probably faster and more convenient than a supermarket or a restaurant… I think I’ve spent more time in the saddle on this race than I have any other.”

Was there a moment when the racing full time, the sleep deprivation, and permanent confrontation with the elements took a toll on your morale?

“I felt pretty solid the whole way actually, yeah I was even relaxed I would say, and happy, I didn’t have to rely on anyone.

Ok, my biggest stress was finding somewhere to go to the toilets which I didn’t enjoy, and worrying about water which there was plenty of.

Yeah, it’s quite stressful to find a place in the woods where you can sit and not be seen and dig a hole and all that, that was really not pleasant at all, it’s so much easier in the toilets, that was the hardest thing for me on this race.” 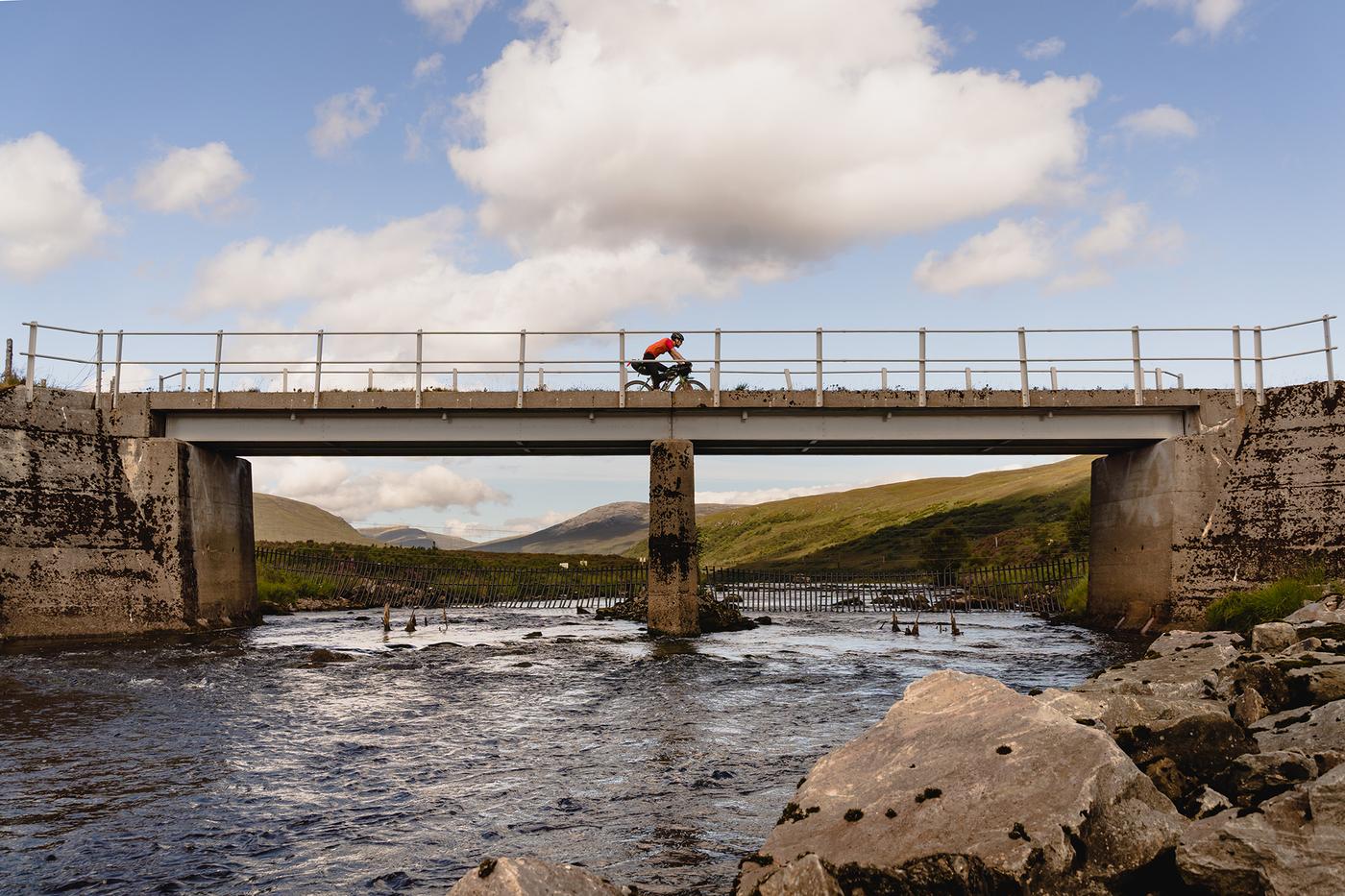 Yeah, I am happy to be outside all the time, am happy to carry my food all the way, am happy not to have any interaction but the one thing I would have liked a bit more is to be able to use the toilets, then I would probably be incredibly happy!”

It got really tough at one point around 1000 km no?

“Well I passed Angus lying at the side of the road to sleep and we had a really rough night, it was a really strong storm, I slept an hour and a half, my bivvy bag got soaked, my sleeping bag was soaked and I made the decision that actually if am here shivering soaking, I might as well get up and at least if I am riding my bike and moving I might warm up a little bit, so I went through the night and against this raging storm, and I really shouldn’t have done it, it was quite dangerous, and I wasn’t really equipped for it.

It turns out that Angus had done the same thing, but he did not get quite warm again, it was really bad, I got off the bike and I sheltered under a train bridge, the brilliant thing about having a stove with us is that I managed to boil some water, to make a coffee, and I rehydrated a porridge and while one of the pouches was brewing I put it down my shirt so it warmed me up from inside, and I drank the coffee and I ate that warm porridge and if I hadn’t done that I would have most likely abandoned the race, without a question.

So yeah am actually pretty proud about the way I managed, you know, to toughen up, and not hide inside in the lodge cause it’s a bit rough outside, so that was the key and after that, I was really proud of what I did so it kept me up and running… 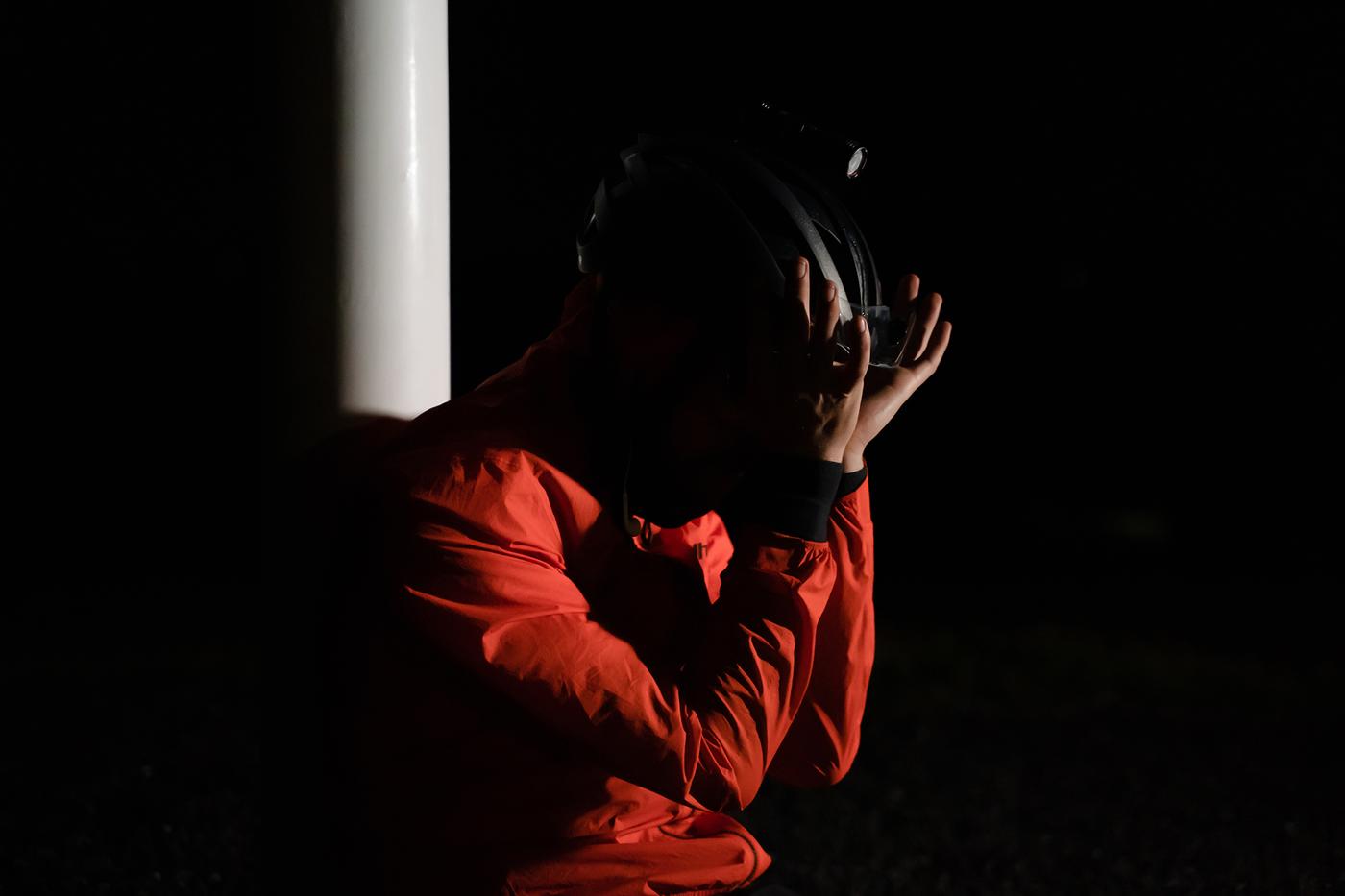 But yeah that night…

It was bad, really.

If I had been allowed to go in a cafe, I probably would have and I would have waited it out but if I did that there, it meant I was out of the race, so I had to deal with it and I was forced to fight my… not my demons… but my weaknesses over the last few years.

The other thing is that I was having some toilet issue that night cause I didn’t go to the toilets for three days before then and it came right then at that moment after the coffee and porridge that it was probably time for me to go to the toilets, it wasn’t a real good timing, so I took all my clothes off in quite a rush, in the middle of a storm… so yeah the stress of that ironically and the relief of sorting it out, it warmed me up so I carried on, I was so so stressed about it!” At some point you have absolutely no more competition, Angus scratched that stormy night and Jason is very much slowed down by a broken saddle and other issues, yet it feels you are still hammering to the finish when you could, in fact, take it a bit easy.

“I wasn’t hammering, I was just riding, I just kept at it…”

But was there a sort of fair play or respect for your opponents and the race to not relax or slow down but keep your head down and go so strong?

“Nah I just wanted to get done with it honestly. Have a beer or something…”

“I saw a pack of wolves, ravenous wolves, last night, which came to rip me apart but then I realized that I was massively hallucinating and it was just a couple of deer, I was a little bit wavy last night!”

Do you remember your race?

“No, hardly, it feels like a million years ago, I’ll need some time to process it, some bike ride to let it come back but I don’t wanna ride my bike right now!”