Beyond Mountain Bikes with the Rocky Mountain Solo 70 – Morgan Taylor

When you think Rocky Mountain, you think mountain bikes. That’s where their focus lies and for that reason you may not even be aware that they’ve made a handful of drop bar bikes over their nearly 40 years in business.

The Solo has been in the BC-based brand’s lineup a long time – as both a cyclocross and a road race platform – but this most recent iteration skews more toward fat tires, cargo carrying, and, well, slotting a bike into the current hot niche in the drop bar world. It’s a step that, in my opinion, aligns this bike more with the others in the current Rocky Mountain lineup.

This review will primarily focus on the Solo platform and less on specific spec choices, though I do have some comments on the 2018 Solo 70 down below. The spec changes for 2019 are definitely worth having a look at, with the new Solo 70 in particular being a bit more of a risky build that better shows the potential of the platform. 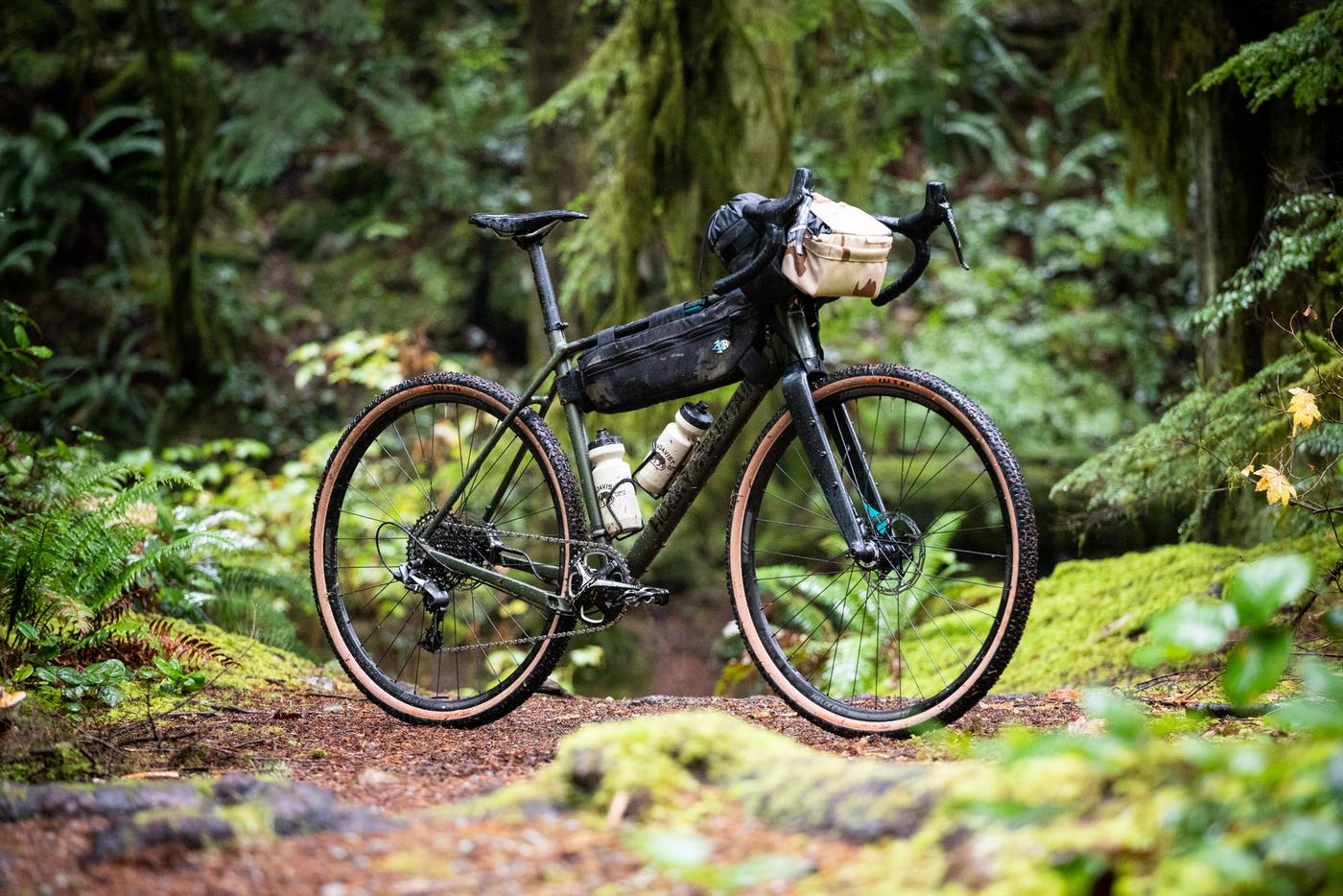 There’s been a huge influx of 650-or-700 compatible drop bar bikes in the past couple years. Everything from steel bikes that lean more toward touring than racing, to full carbon platforms that are lighter and speedier, but, in my opinion, less versatile. The Solo is on the latter end of this spectrum – more race-ready than multi-day – with an aluminum frame and carbon fork.

There’s a reason people are amped up on these bikes: you can approach the genre from any starting point and still find the bike that suits your needs. I’m happy to have so many options in bikes that are simply useful everyday-type bikes, as well as being suitable for the dirt-focused events that are rising in popularity or for general getting-out-there type riding. 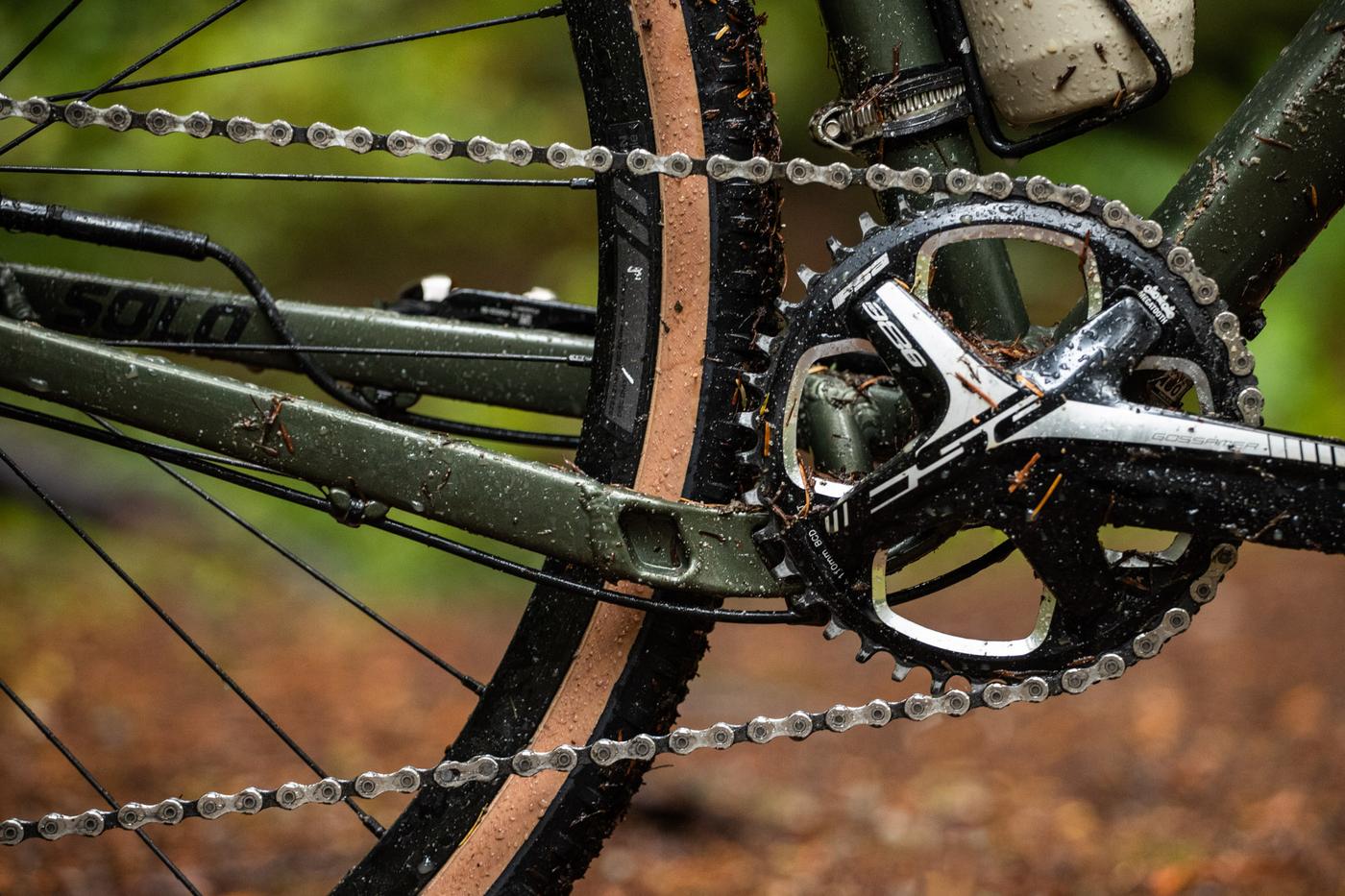 So I’ve established that the Solo sits on the zippier end of the fat tire drop bar spectrum, but what makes it a Rocky Mountain? To start with, the Solo’s aluminum frame and carbon fork share design language found on its wider-tired siblings. The drastically sloped top tube combined with a relatively tall tapered head tube give the bike a particularly modern look. I think the bike’s angular silhouette and fat aluminum tubes look better with bags on ‘em, but that’s up to you.

Today’s drop bar bikes are happily making use of yesterday’s mountain bike wheels, and to that end Rocky Mountain went with a 12×142 rear axle and 15×100 up front. The brakes are flat mount, and both the frame and fork have internal cable routing, including a dropper post hole which I’m happy to see getting put to use with the 2019 Solo 70.

A forged yoke drops the drive side chainstay from the bottom bracket to afford more tire clearance while keeping rear end length at a relatively short 425mm. Rocky Mountain claims it fits up to a 700×40 or a 27.5×2.2 tire, but those are very conservative numbers. The 700×42 WTB Resolutes fit with tons of room; I’d be surprised if a 29×2.1 didn’t fit. 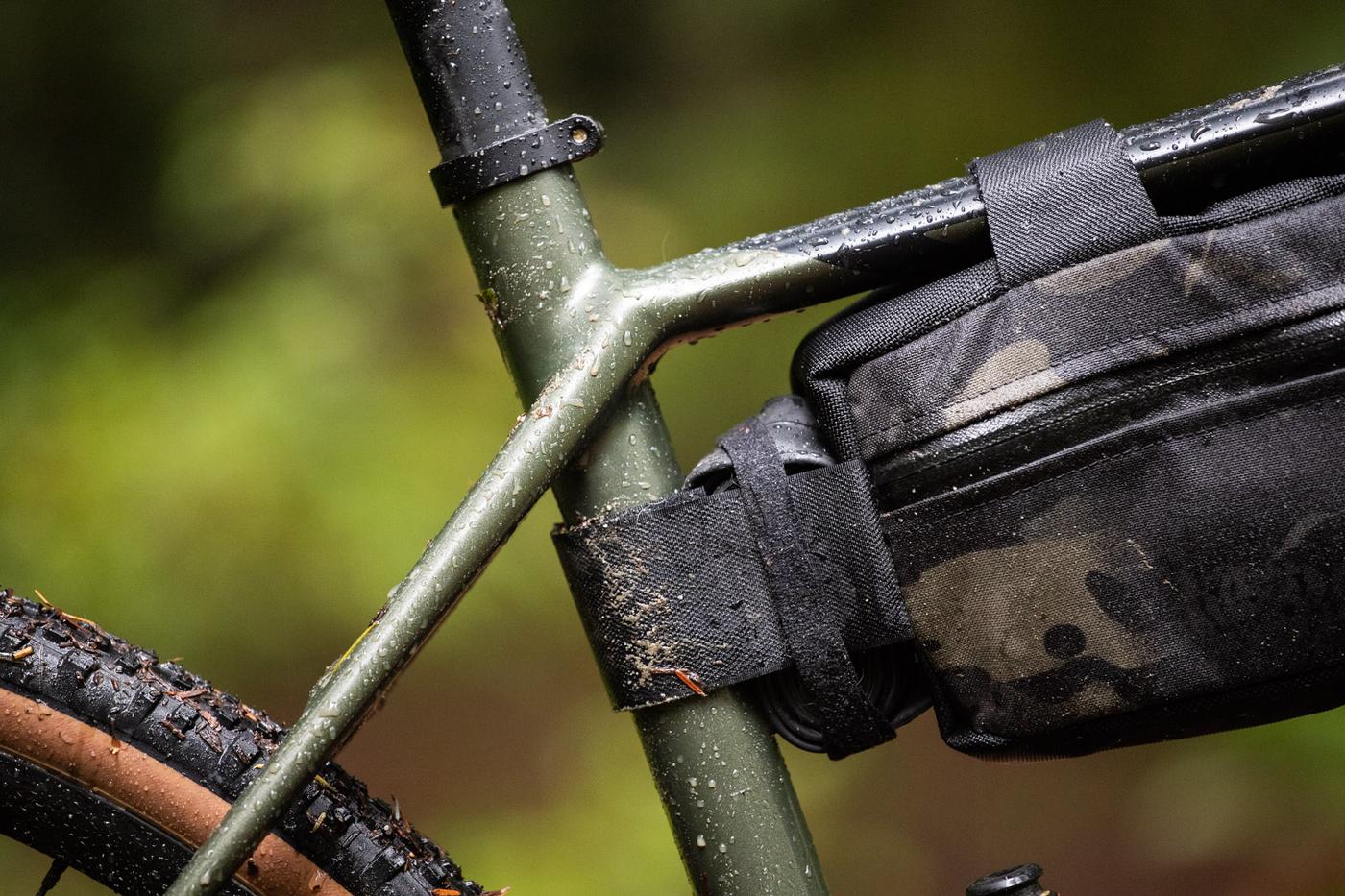 The Solo comes in five sizes, from XS through XL. They all share a 70mm bottom bracket drop and that 425mm chainstay. Head tube angles are on the slacker side, and reach numbers on the longer side. Like most drop bar bikes, the head angle is steeper on the larger frames, and slacker on the smaller frames.

One mark that could be a result of Rocky’s mountain bike focus is steep seat tubes across the board. On this Large frame it’s 73.5º, which in my experience is about a half-degree steeper than a usual Large. To many this means nothing, but it’s significant for me.

For an all-day position, I usually need my saddle slammed back on a 25-26mm offset post on a 73º seat angle. At my saddle height of 76.5cm, a half-degree change in seat angle means 6.7mm fore-aft at the saddle, and that means the Solo requires me to run even more post offset. And there just aren’t many options for higher offset posts.

Because the seat tube angles are steeper than average, this also means reach numbers end up longer than effective top tube lengths alone would indicate. It’s not just the seat angle at play here: tall head tubes also equate to more reach, and the Solo’s got those too.

When you put big reach numbers, long head tubes, and slack head tube angles together, the result is a long front-center and a bike that goes fast and descends confidently despite its short rear end. My general commentary on the numbers of this bike would be that it fits on the big side (except the seat angle) and rides stable. Forks, I’m tellin’ ya, we can be really picky about forks! This one’s got a tapered steerer, through axle, fender eyelets, flat mount brakes, and anything cage mounts. And it’s got an aluminum crown and steerer with carbon blades.

The fork is relatively chunky in its proportions, which match those of the aluminum frame. The choice to go with a 15×100 through axle is a positive for anyone hoping to make use of a not-so-old, but oh-so-obsolete mountain bike wheelset. The fork blades are nearly parallel right up to the crown, making for tons of space for tire and fender.

I have a slight beef with the orientation of the anything cage mounts. You’ll see in the photos that they point slightly toward the front of the bike. This means they can’t really be used for a lowrider or a rando/basket rack.

See what I said about being picky? Because this bike sits at the pointier end of the fat tire drop bar spectrum, people buying it might not care too much – but I’m of the mind that if you’re going to go to the effort to develop a new fork, it could be more versatile with the exact same number of holes in it. The 2018 Solo 70 sports a high performance 1x build. Force 1 hydraulic and a SRAM 900 rear hub are upspec pieces that send the price of this model up quite a bit. Those who are picky about their bikes might be happy about that, but I also feel like those people might not be looking at aluminum bikes.

Force 1 is definitely just that little bit nicer than Rival: the shifting clicks are a bit more precise, and the carbon brake levers have a nice feel. I personally find Rival to be completely acceptable, so Force is a bit of a treat when I get to ride it, yet I never come off a bike with Force thinking “I need this instead”.

So, I’m happy to see the 2019 Solo 70 trading some of the upspec parts for ones that bring this bike further toward its possibilities as a fun all-around bike.

Aluminum responds well to higher tire volume, and that’s where Rocky’s gone for 2019, with WTB’s 650×47 Byways. A dropper post is a fun addition, and one that’ll be sure to get the mountain bike crowd thinking. These changes happen primarily at the cost of Rival instead of Force, with a Rival crank rather than an FSA unit.

I do think it’s worth noting that the SRAM 900hub has been downspec’d as well, to a less expensive SRAM option. I’m always happy to see a truly reliable hub spec’d out of the box, and the 900 falls into this category. People who ride their bike a lot might be looking toward a wheel upgrade in the long run anyway, but having an inexpensive rear hub spec pushes you there more quickly. Alas, it’s difficult to have your cake and eat it too with bike spec. None of my reviews are complete without a bit of “what would I change” commentary. Some of these are easy changes, while others won’t happen until this bike gets an update.

I’m happy that fenders were considered on this bike. Those of us in the PNW can’t really live without them. But the implementation here is not great. The seatstay and chainstay bridges are essentially round tubes with plain holes drilled in them. This means bolting through on both, potentially using curved washers.

At the back end, the industry’s recent move to flat mount brakes has made mounting accessories to rear dropouts much simpler than when most brakes were outside the triangle. But Rocky Mountain has chosen not to put the fender eyelet on the back of the dropout, and instead it’s further up the seat stay, where not all fender stays will reach. So yes, it’ll fit fenders, but no, the installation won’t be as clean as you might like.

You’ll notice in the photos that I’ve got a screw clamp on the seat tube, holding the bottom of the bottle cage on. This is a solution I devised for factory bottle bosses that don’t sit low enough. On my Kona Sutra it was the third cage on the bottom of the down tube, and here it’s the seat tube. One more hole, please.

The bars. They’re similar to the OEM Kona bars that I just couldn’t get down with on the Sutra LTD, in that they have a reasonable shape up top but too large a radius on the drop and less flare than I’d like. Once again, bars are a personal preference, and despite my misgivings about this bar’s shape, they’re one of the first things people consider changing after the saddle.

Lastly, I discussed the seat tube angle in detail above, and it’s the biggest issue for me with this bike. I’m very fit-focused, not only for myself, but for others as well. While steeper seat angles have found purpose in mountain bikes – where climbs are steeper and the saddle can drop out of the way with the push of a button – I don’t think road bikes (and all day mountain bikes, for that matter) need to get steeper seat angles. 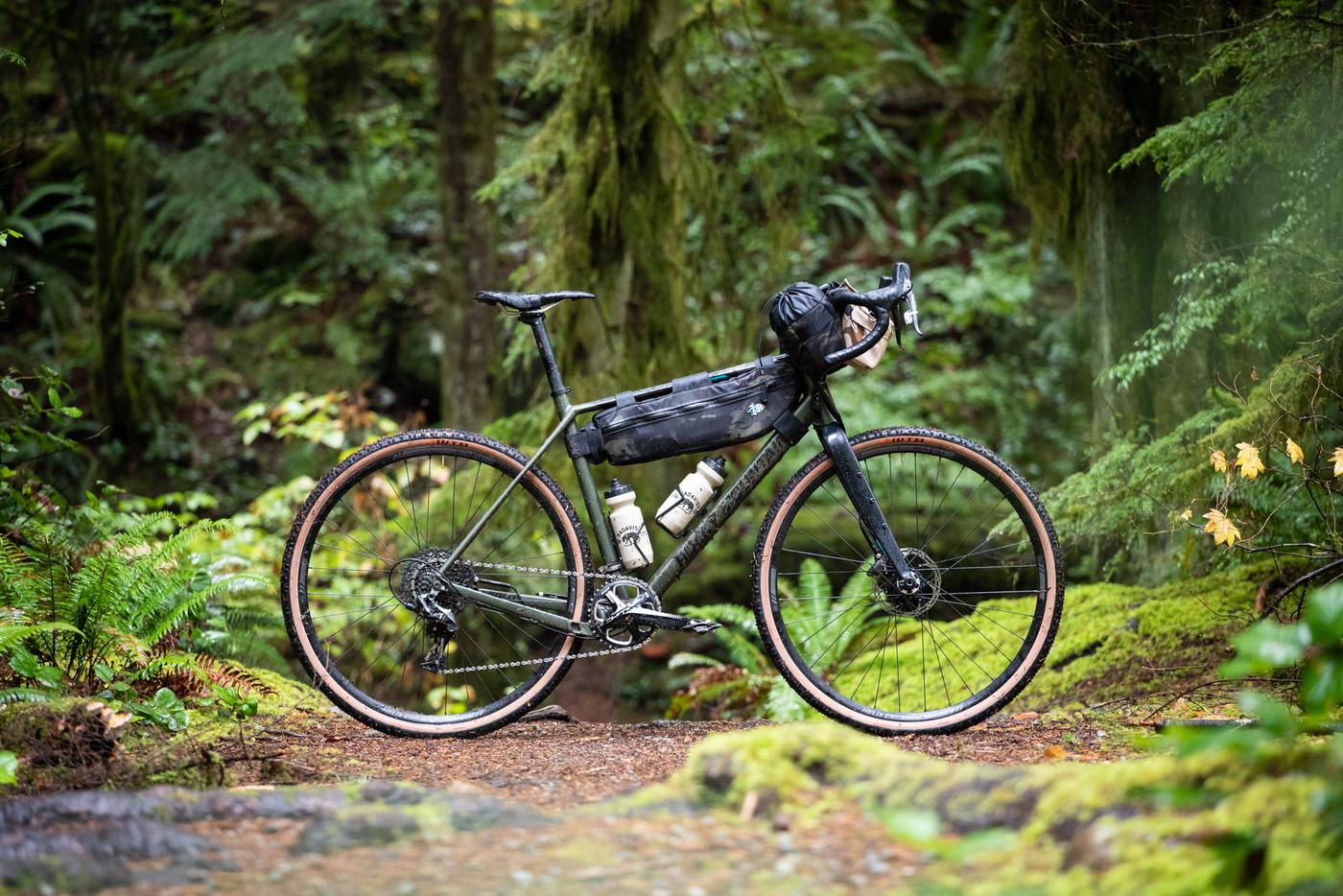 In my personal collection, aluminum is reserved for short duration race applications. Yet, at the same time, I understand how it’s an appealing material. It’s the least expensive of the three common materials, allows for modern aesthetics, and works just fine for most peoples’ needs. It’s a high value material that lets you get a lot more out of your spec list, which also helps prevent upgrade-itis from taking over.

While I would have loved to see what Rocky Mountain could have done with a carbon bike in this category, the new Solo presents an option far more versatile than their previous drop bar bikes, while keeping the price point low enough that they can do fun stuff with the spec.