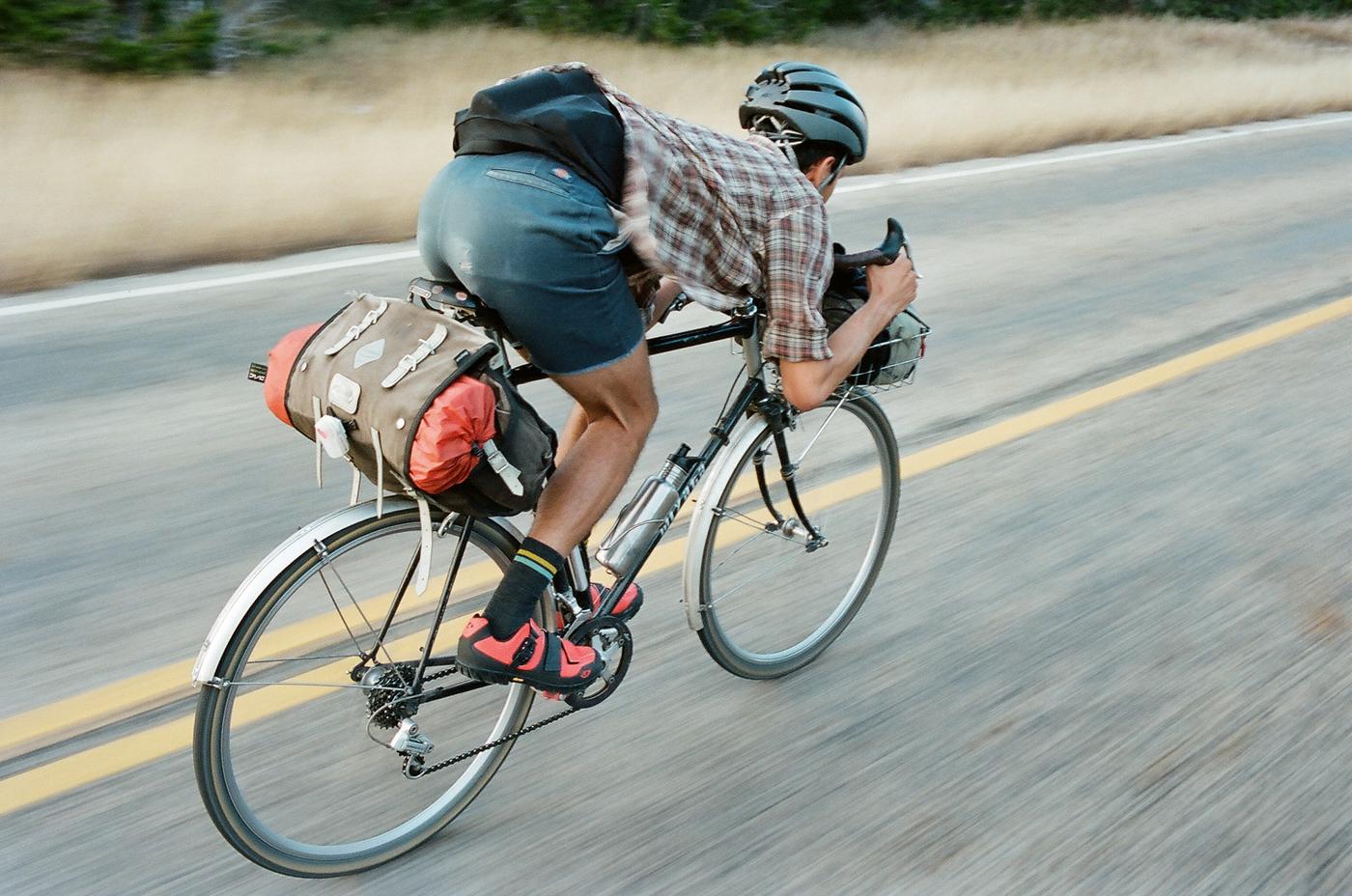 As a non-competitive cyclist, I like to think about how we, cyclists, adventure-seekers, outdoors-minded individuals present ourselves to the outside world. There is no better archetype in cycling than the tourer, in my opinion. Tourers feel accessible in both their garb and vehicle. Plainclothes, flat pedals, big tires, and those big, beautiful classic handlebar and saddlebags, similar to the Fab’s Chest shown on my Sklar in this post or the Carradice bags on Nick’s bike in this photo. 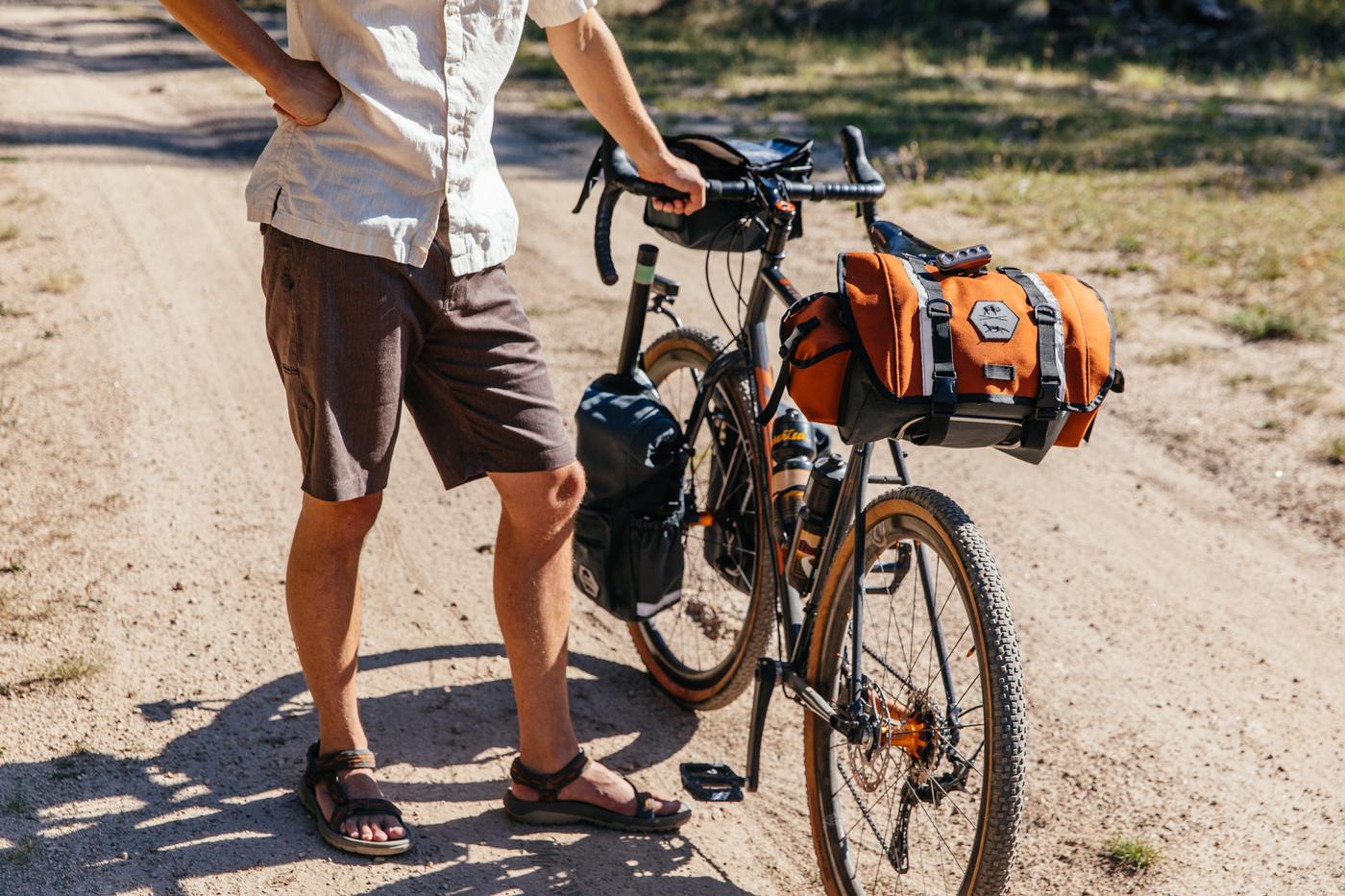 Touring will forever be my favorite form of cycling and with it comes a relaxed pace, and relaxed presentation. 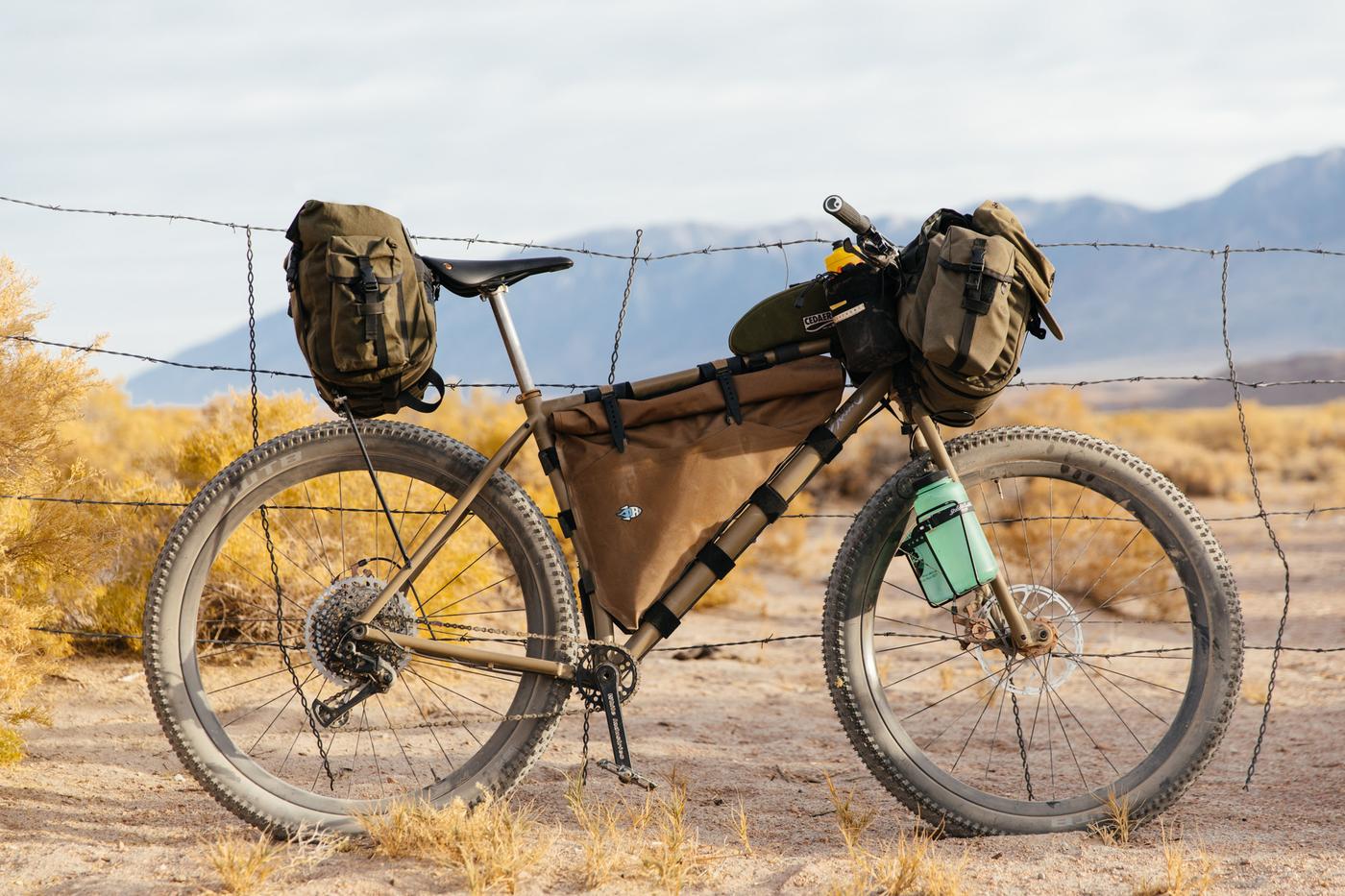 As for this bike, my Sklar Tourer, it’s the result of my years of riding in the Mojave Desert, a notoriously unforgiving landscape, the hottest desert on Earth, ranging from 11,000′ peaks to sandy arroyos and washes filled with razor-sharp igneous rocks and rutted roads with holes big enough to eat a Jeep (I’ve seen it). This terrain has been my go-to zone for bicycle camping as it’s relatively remote and the people you encounter are like-minded, even if they’re on a moto or in a 4×4. Plus, when you’re carrying 15 liters of water (not pictured here with 6L only required on this trip), ain’t no one going nowhere fast. This is the land of the Touring Tortuga. Slow and steady, my friend. 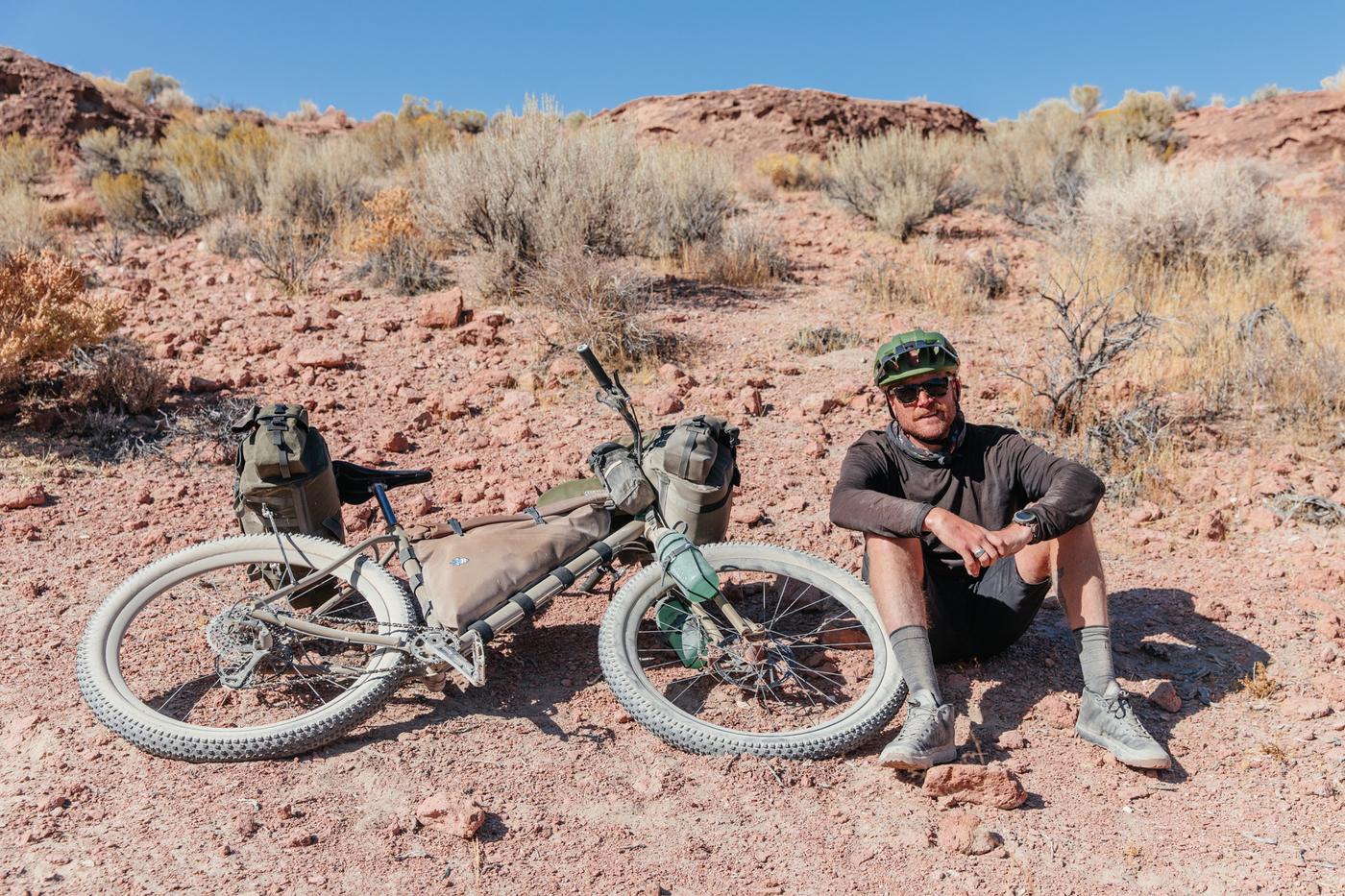 I prefer to have a Fab’s Chest front and rear for this bike, with PecDecks supporting these large, cavernous bags, but for the forthcoming Dangerbird in Las Cruces, I’m switching it up a bit. Those that have followed this site for the past 15 years will immediately want to call me out for having panniers mounted to a rear rack, relatively high. Usually, I ride low-riders with the bags low and to the front as mid-low trail bikes such as this steer more predictably with such weight distribution. 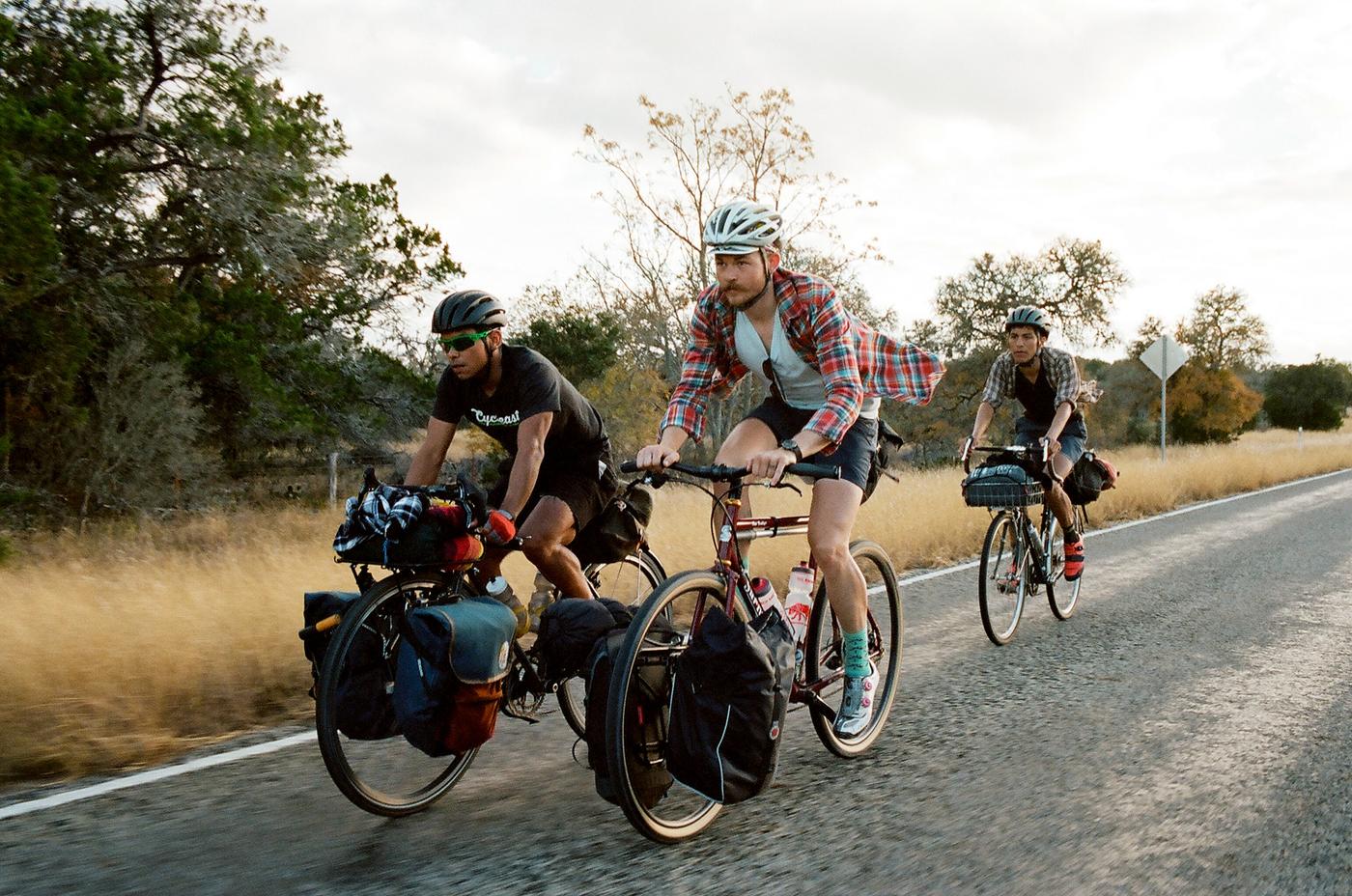 If these were my large Ortlieb panniers, they would indeed be mounted low and in the front, but they’re not. These are new mini-panniers from my buddy Sam’s company, Buckhorn Bags in Albuquerque. They’re lightweight, narrow, have an 8 to 13 L capacity depending on the roll-top, allow you to still hike-a-bike without them hitting your hips, with no plastic buckles to break or screws to lose, and they attach to a rack, in this case, the Tumbleweed T-Rack, via some Voile Nano straps. 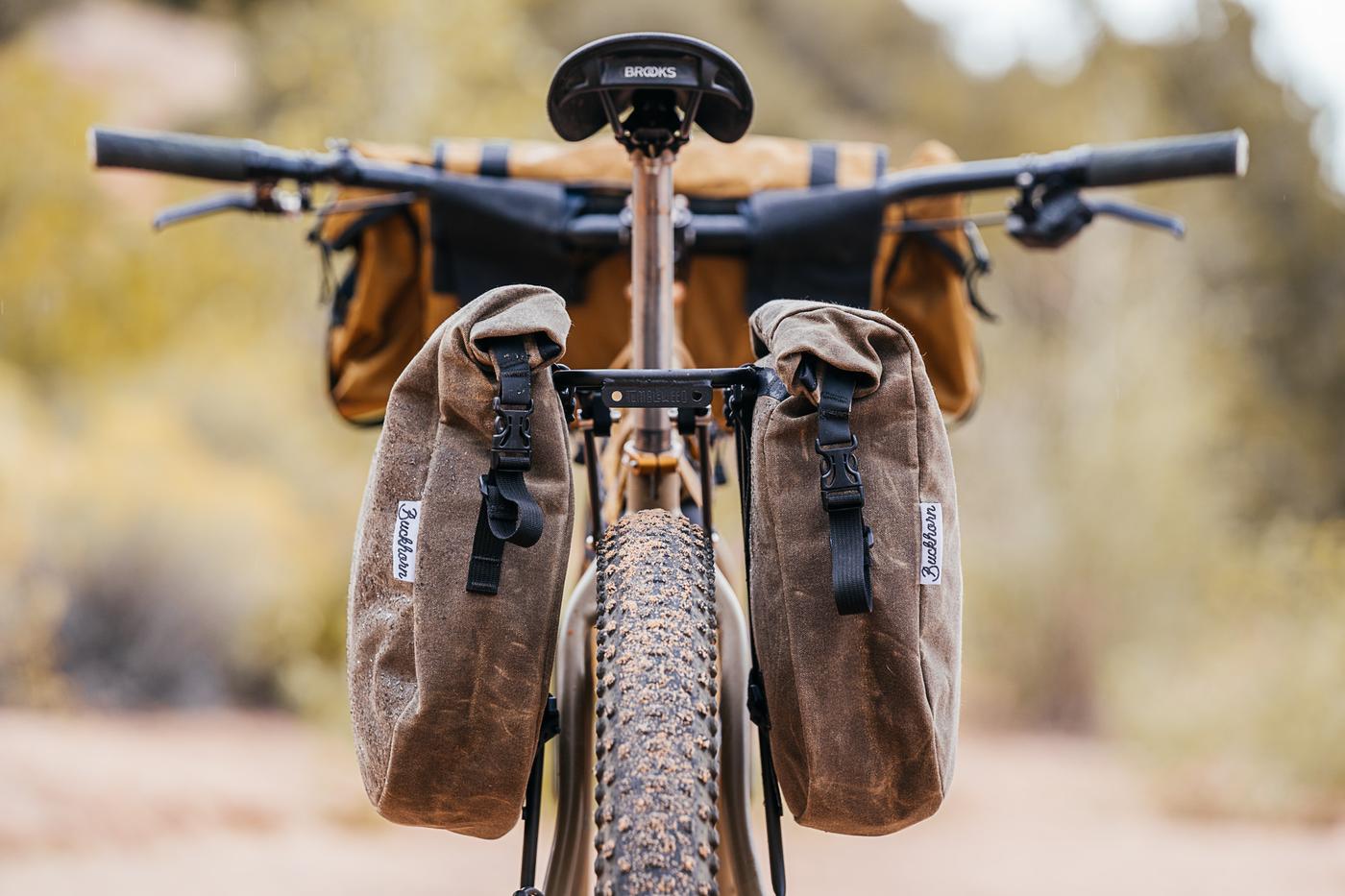 This bike has a different personality with this setup. We are chilling on this tour. I’m bringing lots of creature comforts, I want to have fun, shoot photos, make some new friends, and relax. It’s been a very stressful year and desert touring season couldn’t get here any sooner. 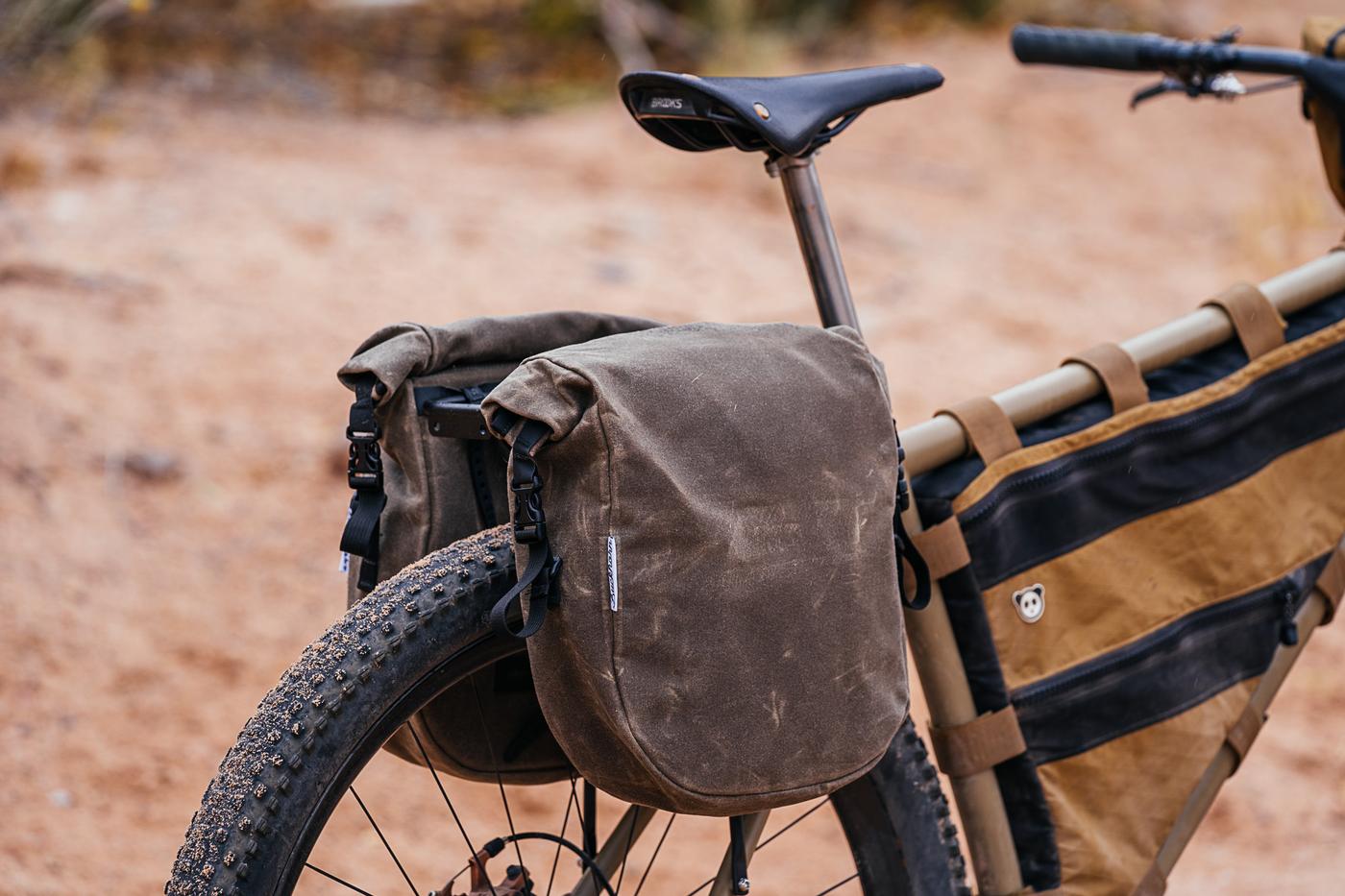 Somewhere in this 800+ word ramble, romanticizing bicycle touring, I’m trying to say thank you to Rivendell, Adventure Cycling Association, and others who have long-promoted non-competitive travel by bicycle. You informed my views and continue to inspire. xo 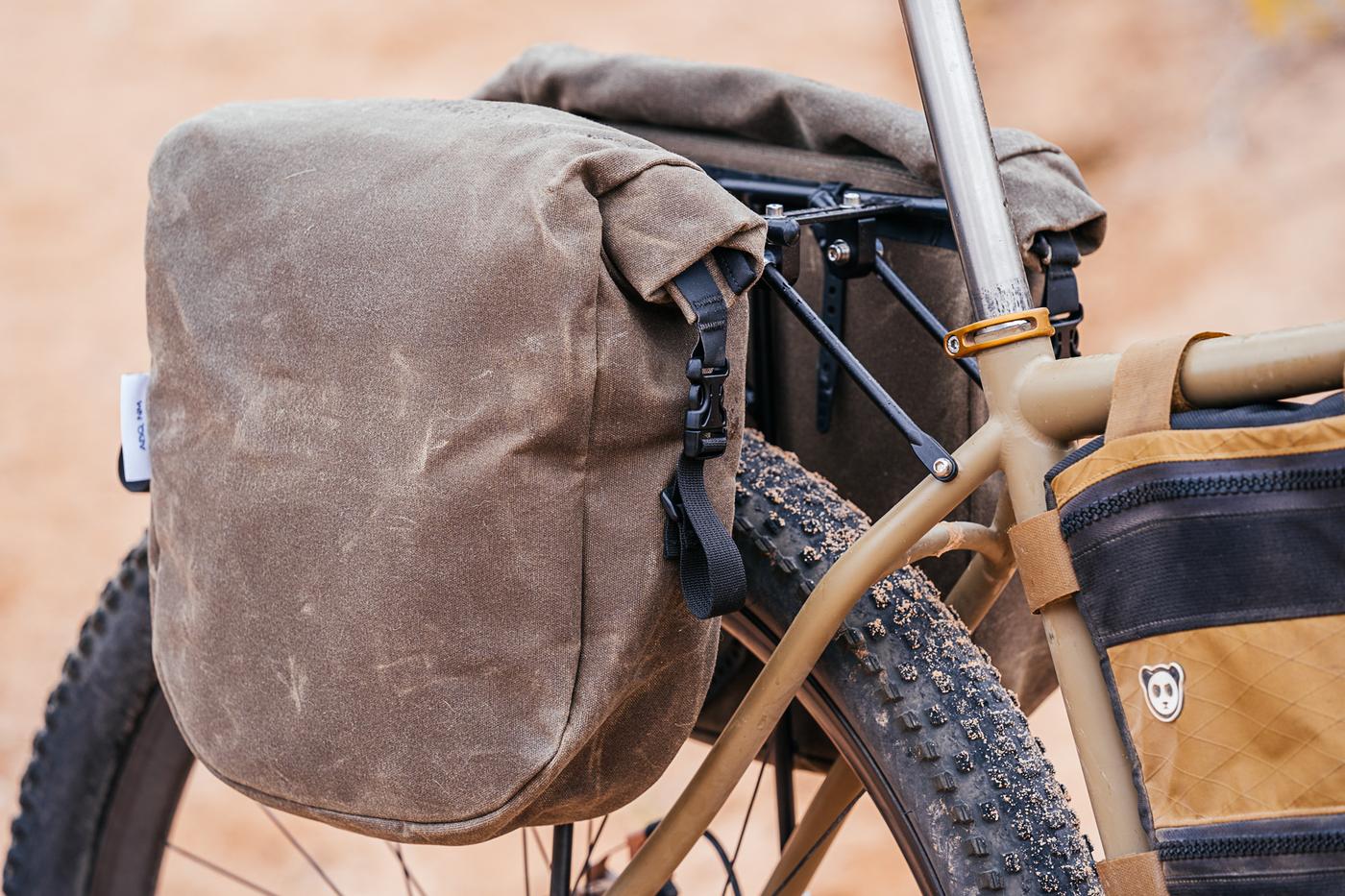 Now to the meat and potatoes so to speak: 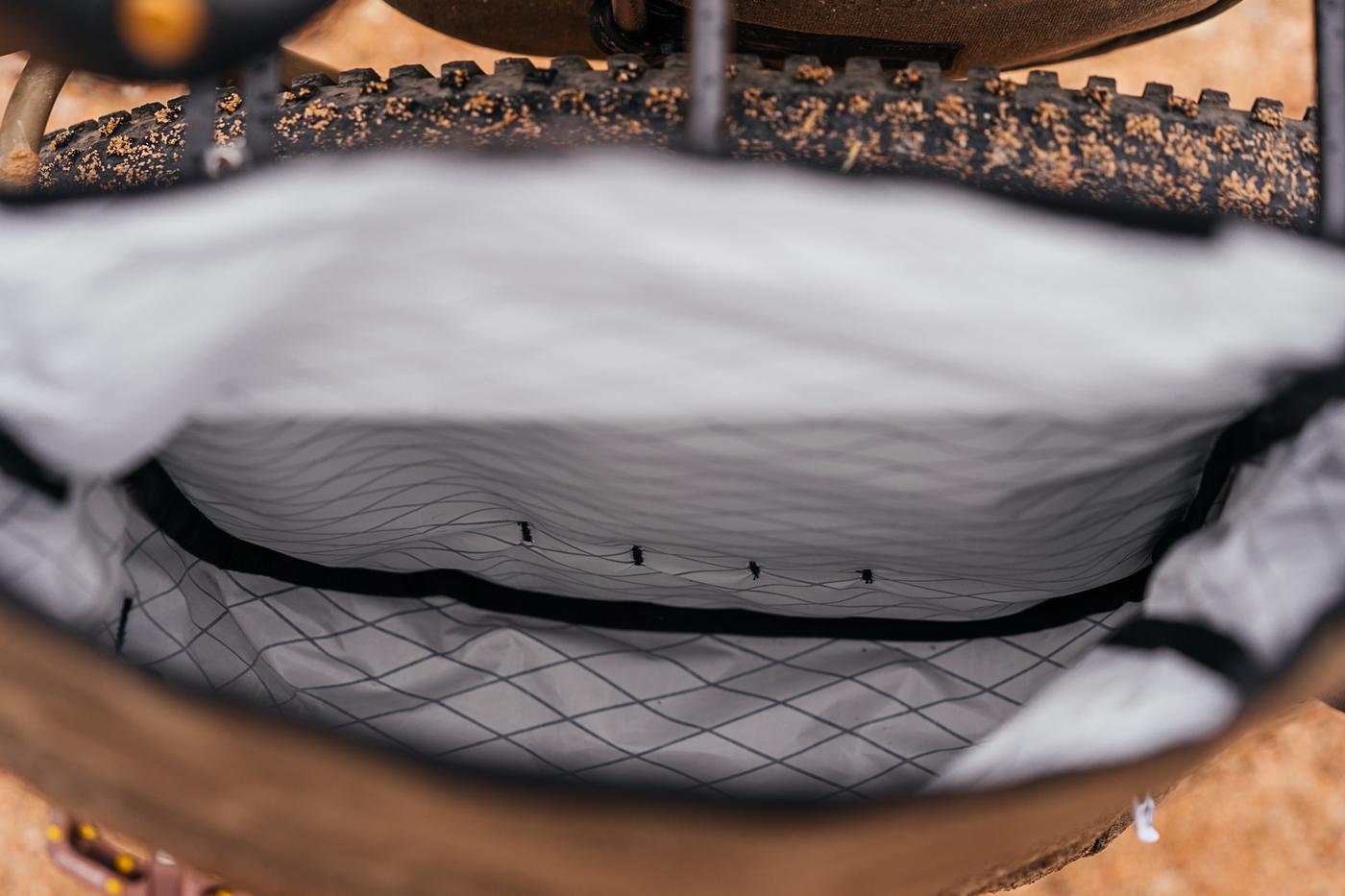 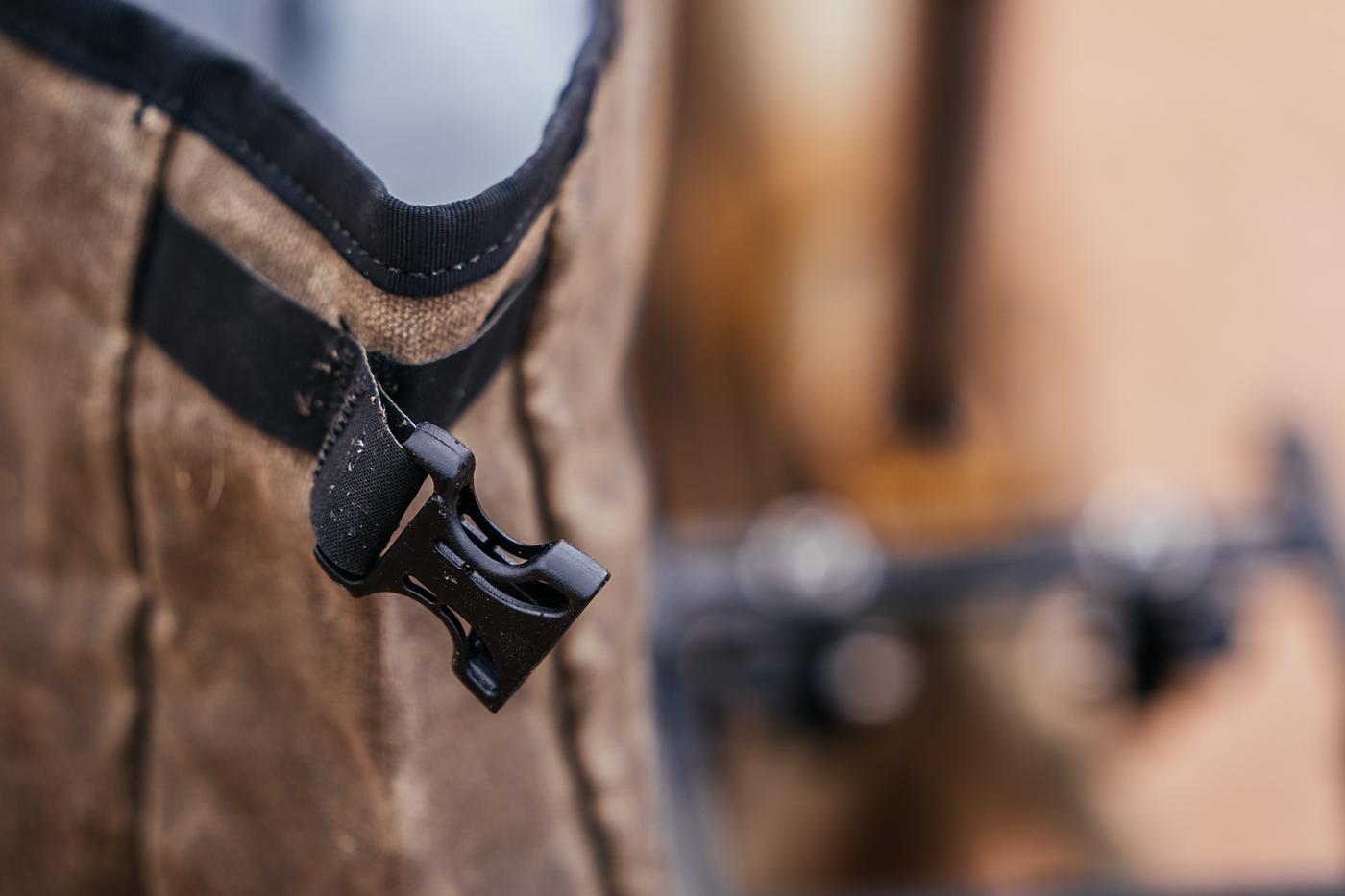 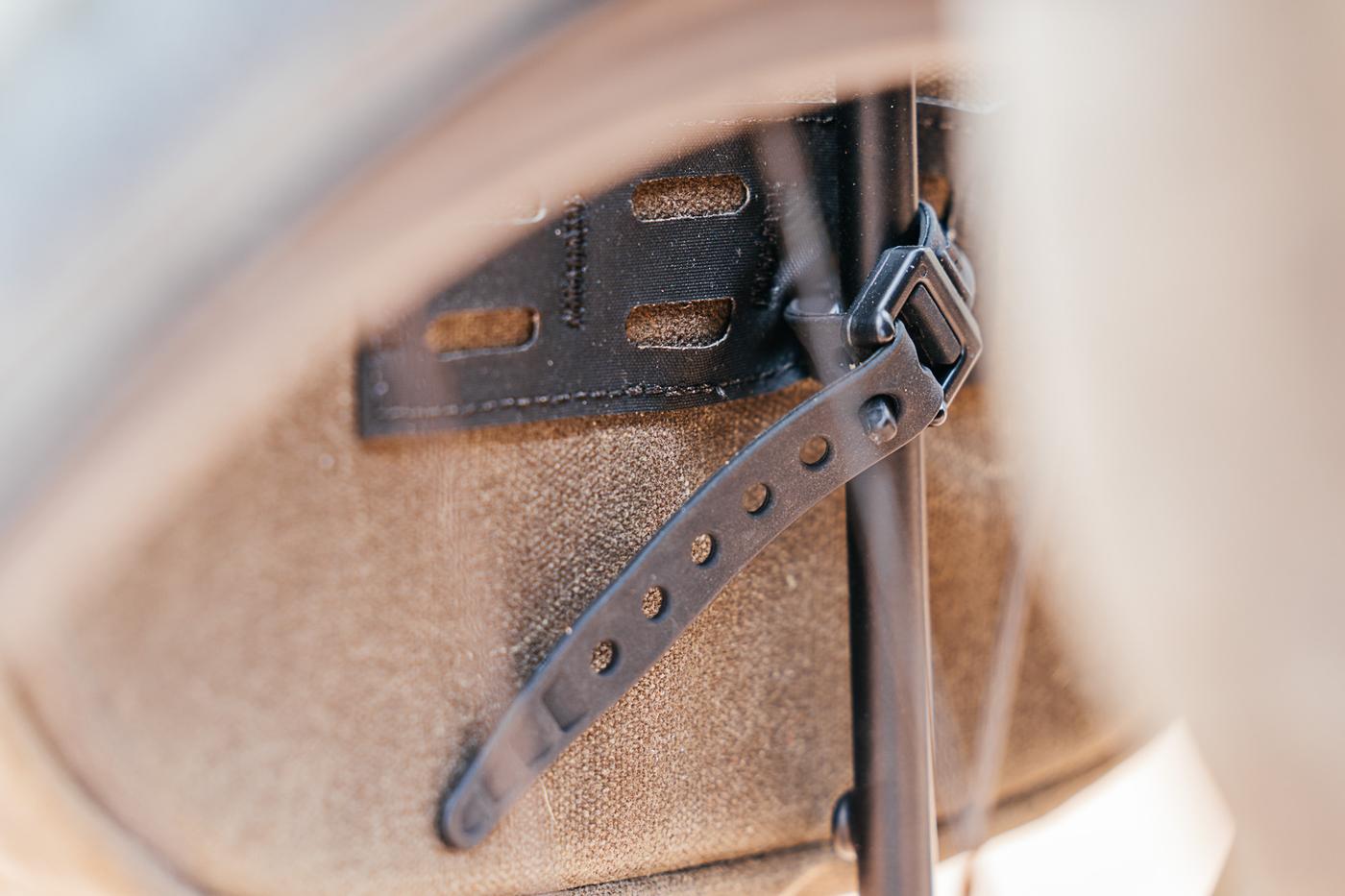 Buckhorn is planning for an early November pre-order with delivery by Christmas. The panniers will be available to preorder on Buckhornbags.com and when they are, we’ll post a Radar update. As for a production run, well, you might have to wait til 2022… 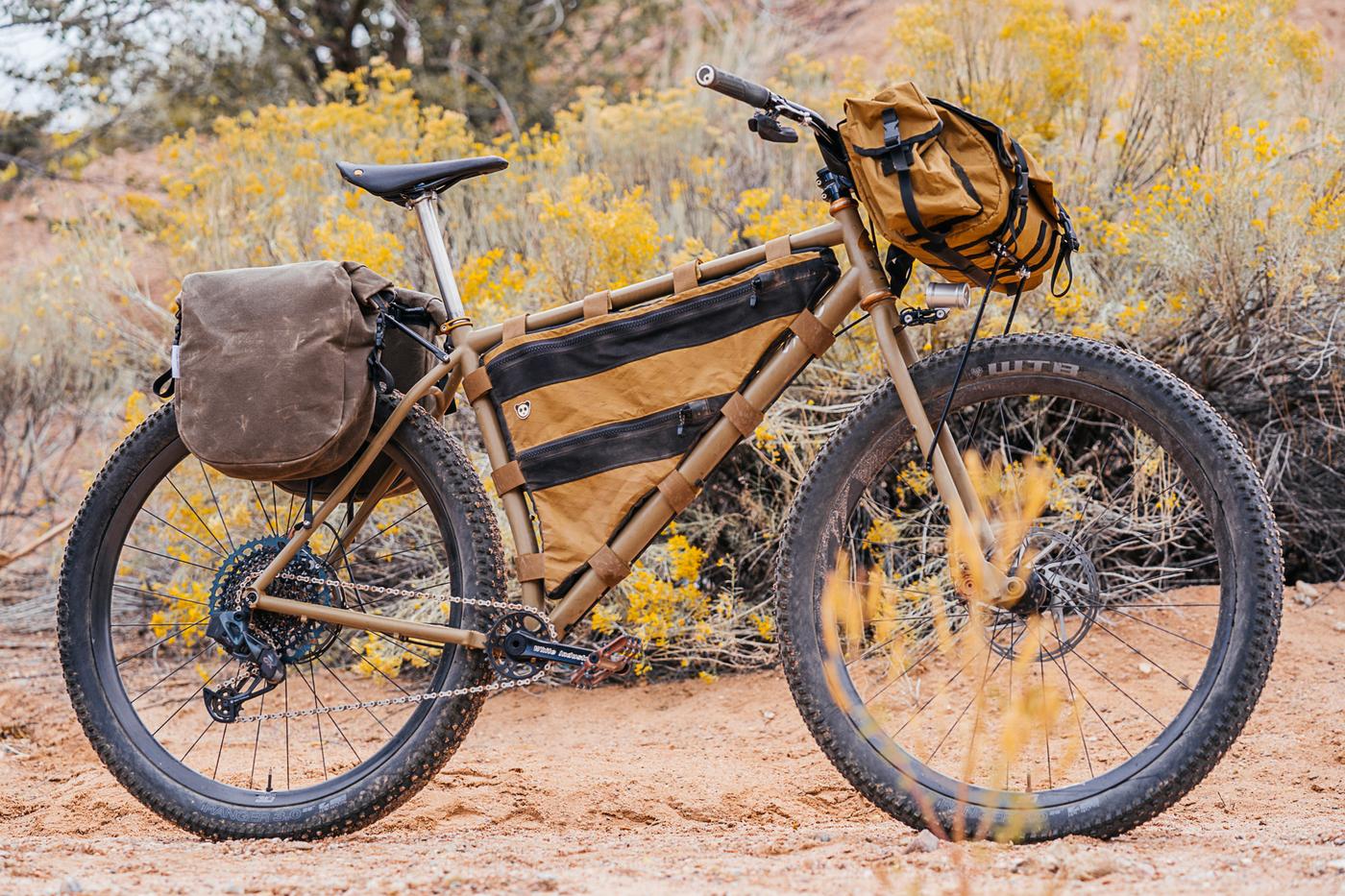 Thanks to Sam from Buckhorn for being such a solid human and letting me try these panniers out next week. I’ll be penning a follow-up Reportage entry, post-Dangerbird, and will offer up more thoughts on this setup then…