What started as a weekend getaway on Super Bowl weekend with friends has evolved into something much more than that. Originally, our “Super Bro” weekend – please take that tongue in cheek – was just a bunch of friends camping and riding. The next year, it grew, more ladies attended, the weather kinda sucked but what can you do? It’s Texas in February. Once I left Austin, the event spread to our friends in Seattle at Swift Industries and the name was changed to the more inclusive, less inside jokey, Super Stoke weekend. What’s the point in joking with a name if you have to explain it each time?

The event continued, mostly in Texas, with a field trip to Seattle one April, before landing in Tucson this year. Now, it was a hard sell to get me to drive to Austin to ride in the rain, but I’d gladly drive to Tucson to ride in the majestic Sky Islands and the San Rafael Valley. 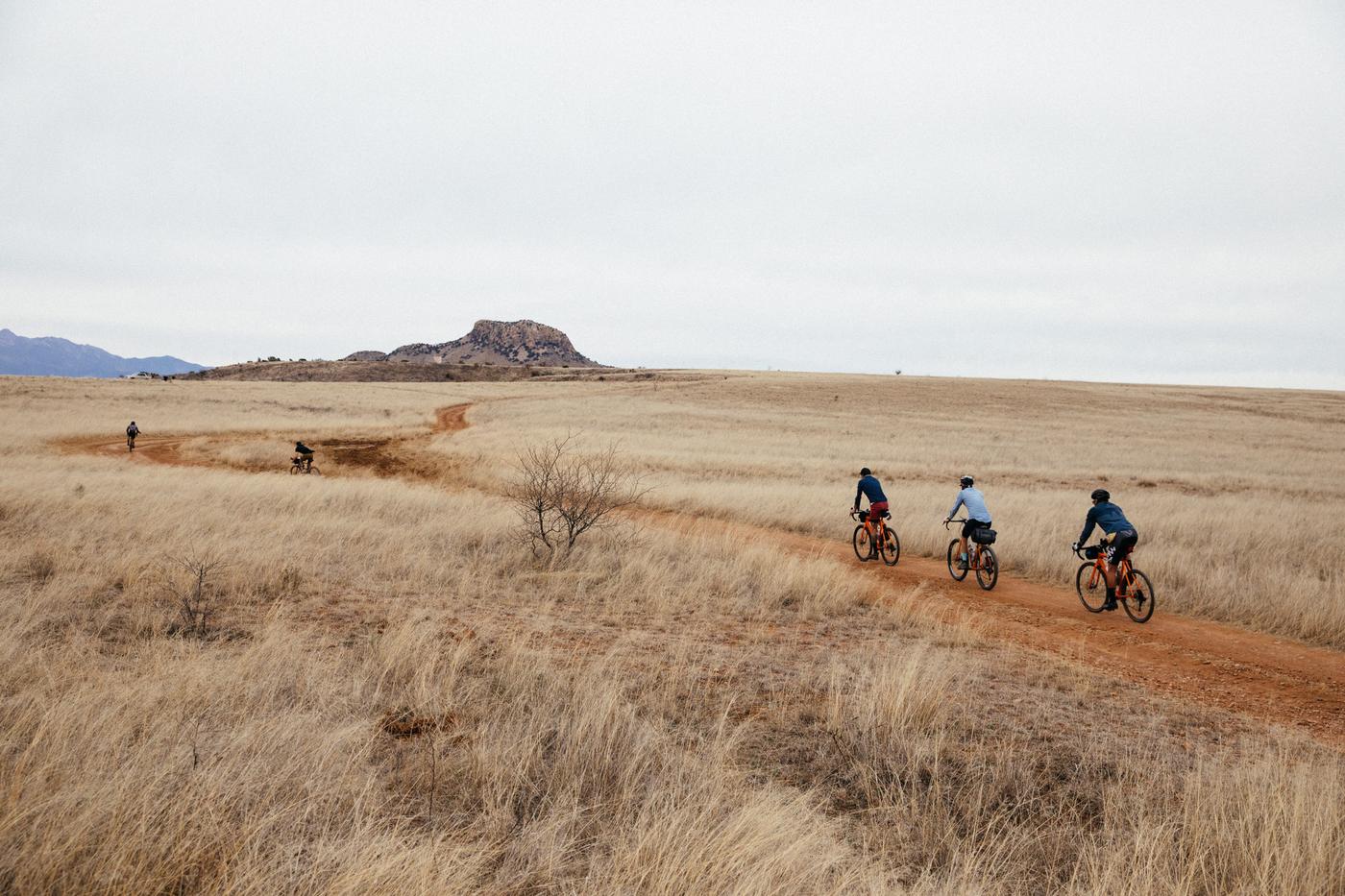 Sky islands typically are isolated mountains surrounded by radically different lowland environments. They protrude from the otherwise flat landscape and jut into the clouds abruptly. In doing so, they created specific ecoregions, allowing the higher elevations on the mountainsides to flourish with biodiverse life. One of the identifying elements of Sky Islands is the physical separation from any other mountain range, resulting in what is called a habitat island. Think of a lush mountaintop forest, surrounded by dry and arid desert.

As temperatures increased over time, these zones served as a refuge for species who were stranded by the warming climates. As such, Sky Islands are typically frequented by biologists looking to study these isolated animals. The American Southwest is home to many Sky Islands, ranging from Southern New Mexico to Southern Arizona, where our ride takes place. The disambiguation of Sky Islands in this instance refers to the San Rafael Valley, around the town of Patagonia. Unfortunately, as ecodiverse as these Sky Islands are, they are also ripe with minerals and have come under the eye of extraction operations… 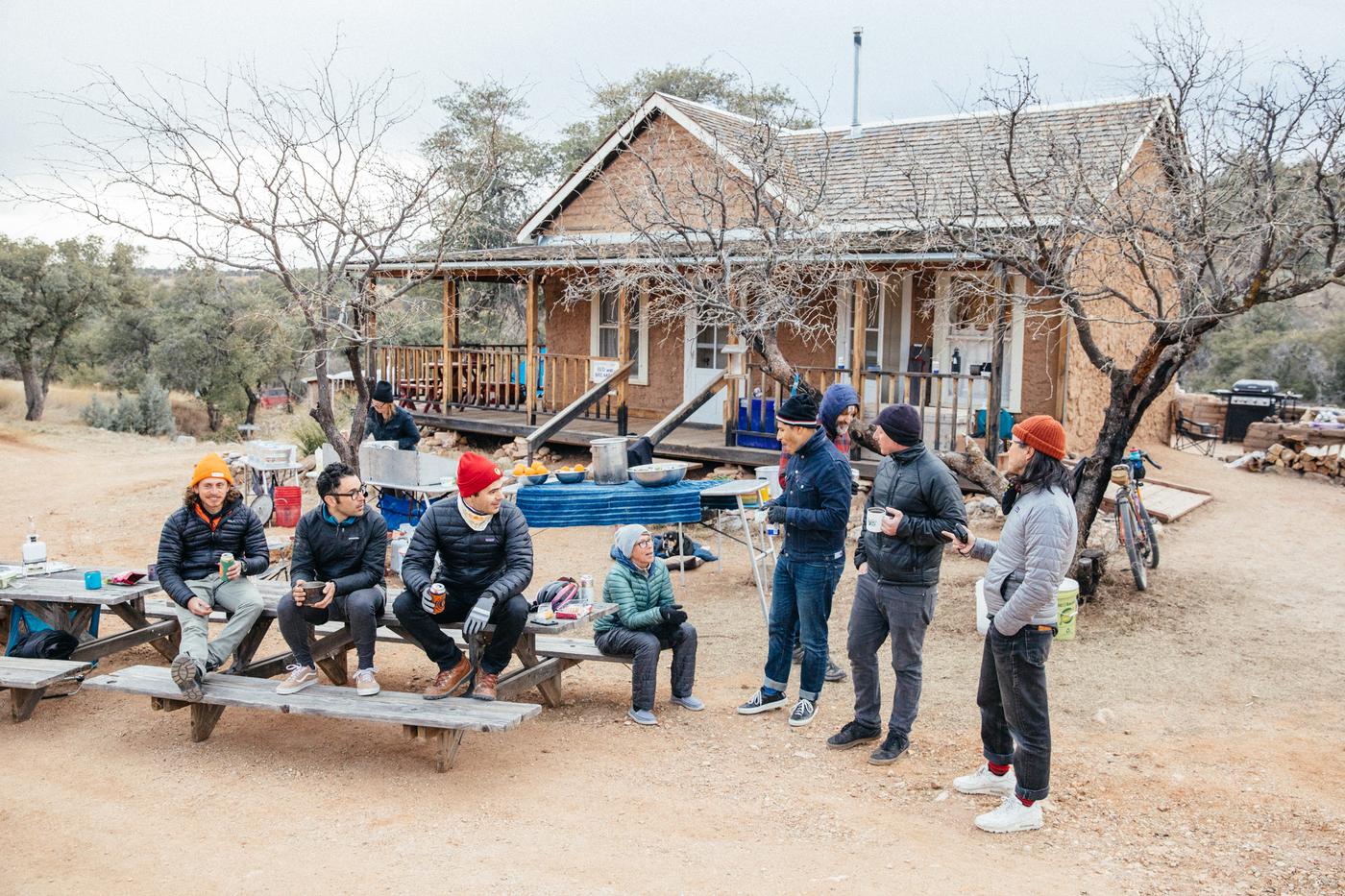 Work With the Locals

Gideon and Jacob from Austin’s Beat the Clock Cycling, Dan from Colorado, along with Martina from Swift Industries, pinged Colin Holmes from Rusty Pedal to give his input on the riding route. They nailed down Kentucky Camp for the weekend – a once-forgotten cabin alongside crumbling adobe structures, that acts as a refuge on the Arizona Trail. Colin’s input suggested our route ride straight from camp to Patagonia, before climbing up and through the San Rafael Valley before making a big loop back into camp. It totaled 80-something miles with around 4,000′ of elevation, with no real climbs on the agenda. Sound like heaven to you? It sure did to me! With all the rain we’ve been getting in Southern California, I was stoked to get into the desert and ride, especially since I’d yet to spend any time in the San Rafael Valley and have been hearing such good things about the zone. Then to up the ante, the group hired Jasper from 5 Points to cater the weekend!

Those of you doing the Ruta del Jefe will ride some of the same roads we covered on our ride last Saturday. 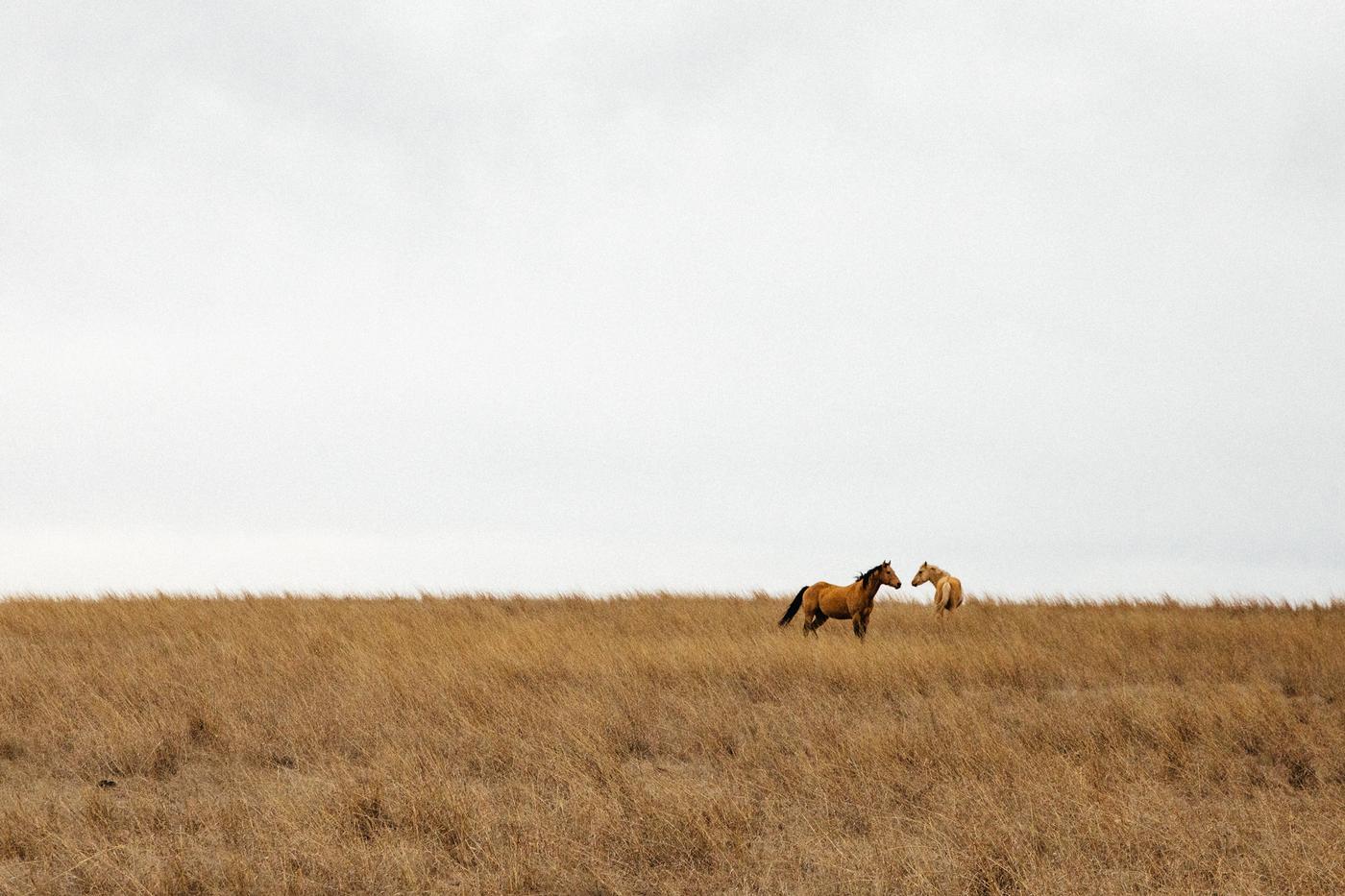 Spend enough time in the San Rafael Valley and you’ll see a lot of border patrol agents in their white pickups, towing four-wheelers, and donning radios. This zone is being politicized currently and some would even go as far as to call it unsafe, which is a sad and untrue labeling of such a beautiful, yet at times hostile environment. With temperatures spiking making overland travel by foot deadly in the summer months.

Before all this political turmoil, the Gadsden Purchase in 1854 solidified the United States and Mexico’s territories, subsequently dividing the Tohono O’Odham Nation in half, making interstate, or in this case, international travel more difficult. Seventy-five miles of the southern border of the Tohono O’odham Nation’s border happens to coincide with the United States-Mexico border. The Tohono O’odham Nation Reservation is the second largest in the United States and still to this day, members of the nation cross the border to visit family members and sacred sites as they have for thousands of years before borders, before walls, and before settlers.

Certain political figures would have you believe this land is overrun by drug traffickers, gang members, human-trafficking Coyotes, and undocumented immigrants when in reality you’re most likely to be overcome by the sheer beauty of this vast landscape. Our group had some options. Either ride out to camp from Tucson on a 50-mile road ride or drive to Kentucky Camp. Then those who rode out would also ride home. Due to my schedule, I had to meet them at camp in my truck, but along the way there, I saw the group huddled in a paceline alongside a busy highway on a sunny and hot day. Suddenly, I felt a little better about my decision. (Don’t worry, they took the dirt route home on Sunday!) We all settled into camp slowly, unpacked, setup, shook hands, made acquaintances and hyped ourselves up for what awaited in the morning.

Long gone was the sun and in its place came the wind. Typical. It didn’t stop us, for our day was a bit ambitious given the time of year, the size of our group, and the mileage covered. 80 some odd miles is a lot with 30+ people. Sure, the group would split up eventually, but we tried to stick together as long as we could. It wasn’t until the first descent after lunch that we bid adieu unknowingly to the speed goats – we’ll call them the Pronghorn Pack to use the vernacular. 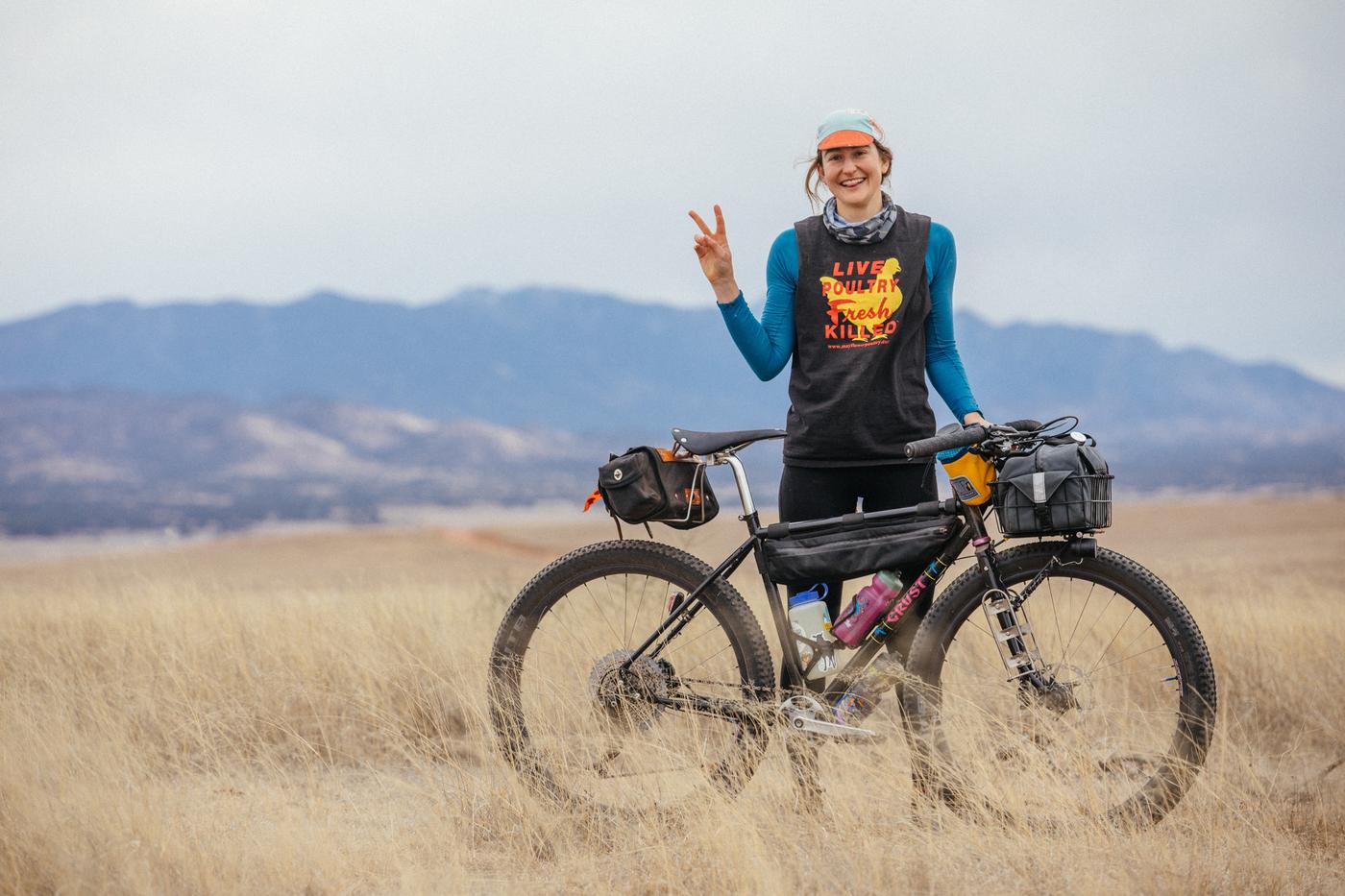 Meanwhile, the rest of us battled it out with wrong turns, pickup trucks, headwinds, and the desire to be warm(er) back at camp. Rolling hills and mesquite trees were the backdrop as javelina, roadrunners, and bobcats scurried across the road to make way for low pressure, high volume tires and chitter chatter.

The day was long and as evident by our shadows, we had little daylight left. The last climb into Kentucky Camp was a bit of a butt-kicker, but all in all, we toughed it out. There are many themes present in this story, which coincide with this coming weekend’s Ruta del Jefe race, which goes even further into and up through the San Rafael Valley and our Reportage will surely dive deeper into the geopolitical landscape.

Following up from Saturday’s 80-mile ride, half the group pedaled back to Tucson for happy hour at Transit Cycles, where we all shared stories from the day and our plans for the rest of the year…