Chameleons don’t actually change color to “blend” into their surroundings. Contrarily, their colors are used to mark territory, attract mates and display moods, often resulting in these unique lizards “standing out” more than blending in. The Santa Cruz Bicycles Chameleon adheres to this logic, standing out from many of the other production hardtails on the market but before we get ahead of ourselves here, and lizard anecdotes aside, when I first saw the newly-designed Chameleon last year it checked a lot of boxes and left me with a few questions.

Sure, Santa Cruz is saying the chameleon is a master of adaptation, which metaphorically makes a lot of sense. This bike can really do a lot, but isn’t that the nature of hardtails in general? For me, my thoughts on the Chameleon stem from its legacy, its updated design and most importantly, to a lot of people, the cost. 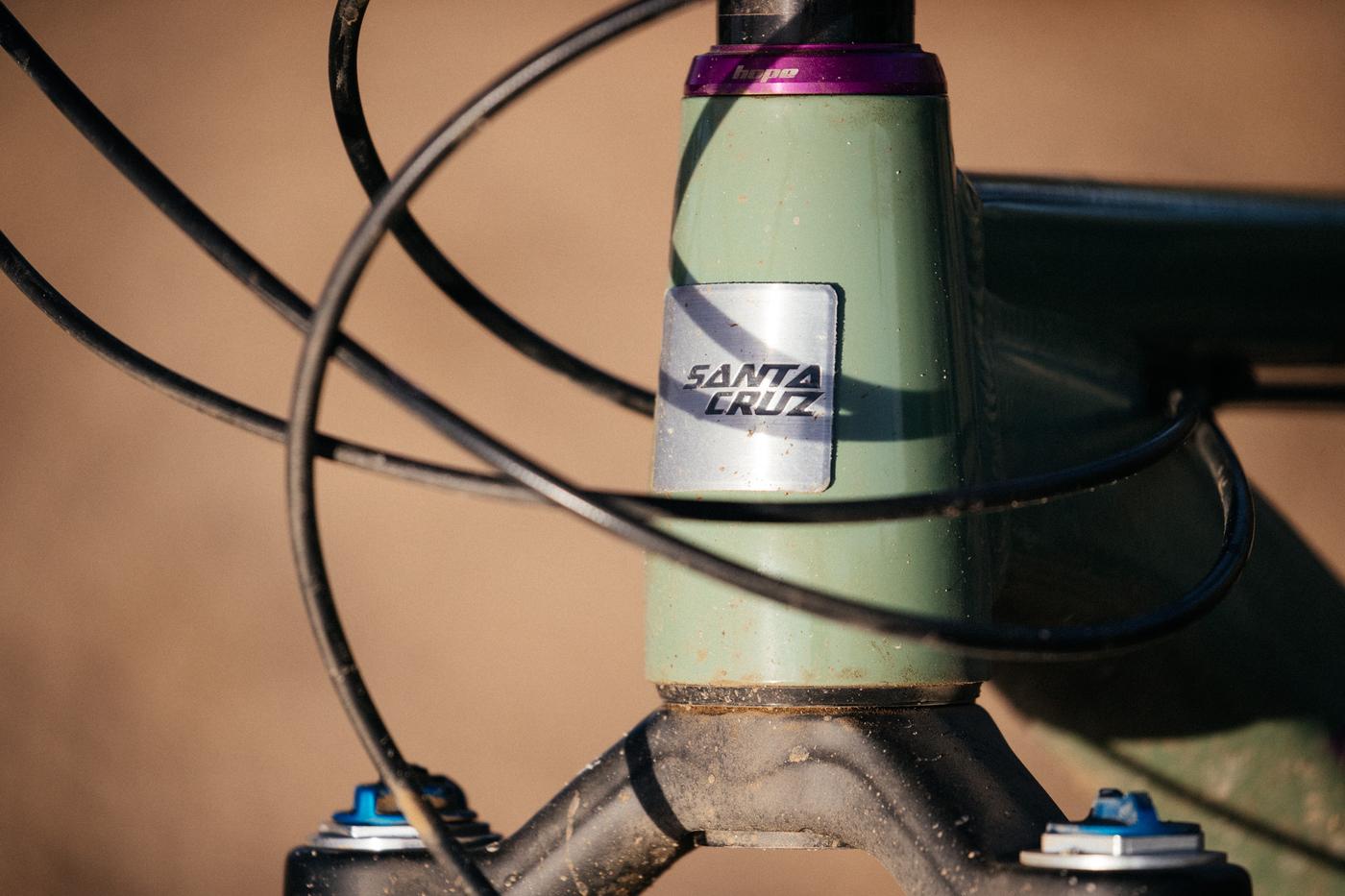 The Chameleon was always that odd little shreddy frame offering amidst a catalog of heavy-hitters in the Santa Cruz lineup, which spans from lightweight XC-race models like the Highball to the big and rambunctious V10. So what is the Chameleon anyway, or I suppose, what was it? Everyone has a Chameleon story and most of these tales started with the phrase “it was my first real mountain bike.” My experiences with the Chameleon centered on the rental market. If I was somewhere that had mountain bike rentals, and the trails didn’t demand an AM or DH bike, I’d always go for the Chameleon because I knew exactly what to expect from it. This platform has a lot of heart for mountain bikers, so adapting it is in a lot of ways, a resuscitation. Staying true to its easily-adapted to singlespeed roots, the aluminum Chameleon sports adjustable and removable dropouts. These are for either gears with a boosted 148mm x 12mm axle or single speed with 142mm x 12mm axle. The geometry got slightly tweaked too, with a short 415mm chainstay, a head angle of 67.5º and a bb height of 315mm. Based on a 120mm fork, the Chameleon might seem under-equipped, sitting in there amidst big bikes like the V10, but alas, this bike, like its natural world namesake, has a few evolutionary tricks up its sleeve. Being able to fit a 3″, 27.5″ or a 29″ x 2.4″ wheel, thanks to the dropouts which add 15mm of adjustment, is not necessarily a new thing for the MTB industry, or Santa Cruz itself, but it is for the Chameleon and its exactly what it needed. This frame has evolved to be up-to-date and relevant in this ever-changing industry, resulting in one of the most enjoyable rides I’ve experienced on a production hardtail. The bigger tires also drastically reduce the otherwise chattering experience common with aluminum hardtails. In fact, I tried my hardest to compare this bike to my steel bikes in terms of stiffness or resonance but couldn’t.

Best of all, the Chameleon comes in two build kit options and a frameset offering, all of which are very appealing to your wallet ($1,699 for the D complete kit, $2,349 for the R complete kit and $749 for the frame!) 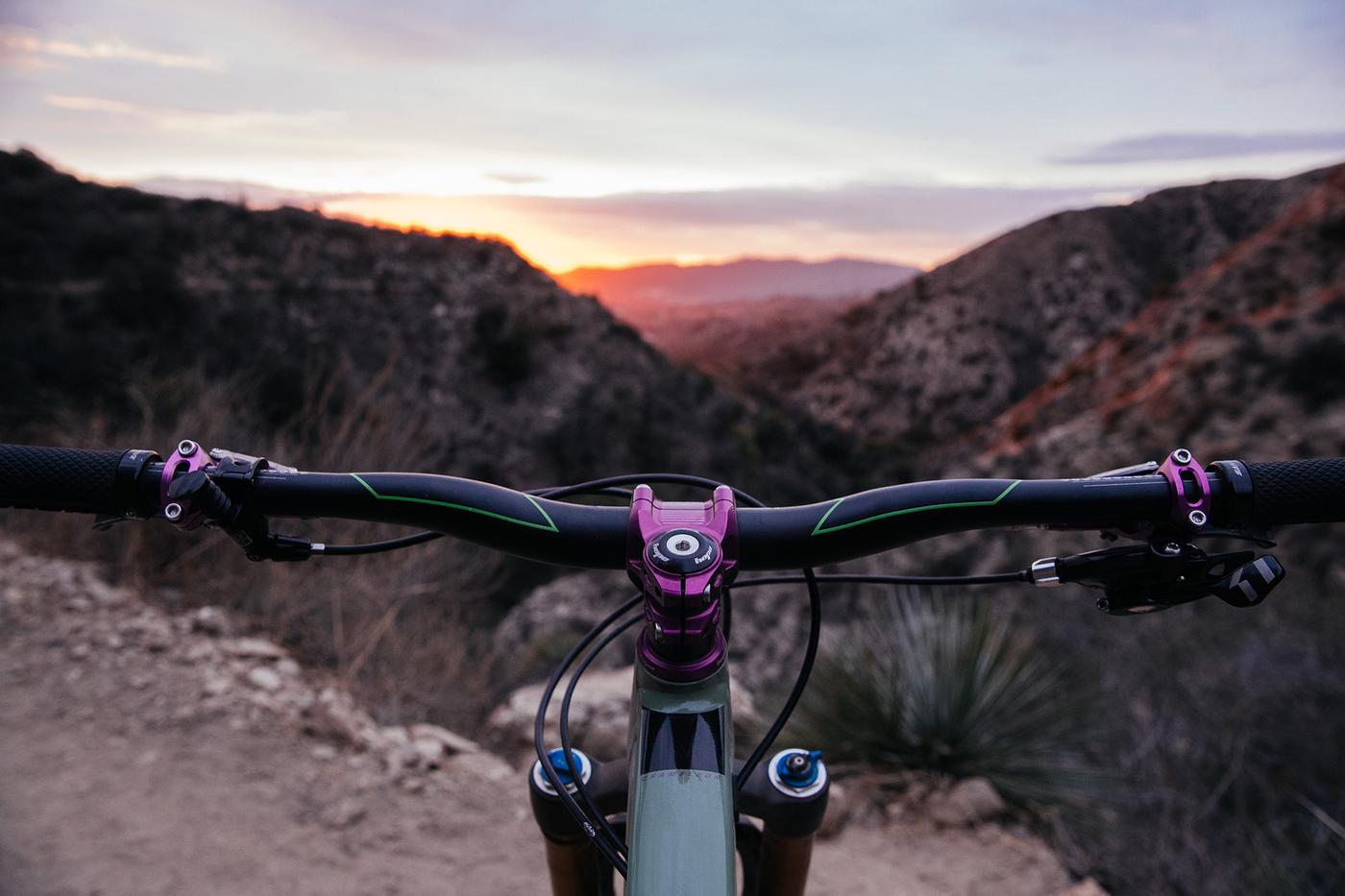 This particular Chameleon was custom-built for a tradeshow using Hope UK parts and a few fancy upgrades. While these components certainly add to the experience of the review, I’d say the meat of the ride quality lies with the frame design itself. Although, purple does look damn good mixed in with that high desert sage green! This was my first time riding so much Hope and it gave me just that: so much hope. Hope that you can still make kick-ass hydro disc brakes in the UK, or Europe. Hope that a hub’s engagement and sound would be so confidence-inspiring. Hope that the anodizing would be consistent across the entirety of a catalog. I’m very grateful to be able to experience all this Hope, first-hand. Now, I just hope I can keep riding some of this stuff for a longer-term review.

Back to the frame. Fitting two water bottle bosses in such a compact front triangle is tough, yet Santa Cruz did what so many people opt out of: adding a bottle mount to the underside of the downtube. This, along with all the internal routing, make the Chameleon a prime candidate for bikepacking as well. Sure, the frame bag would be quite small, but it’s still got enough room to cram in supplies. There’s even a direct-mount front derailleur attachment point which may or may not be your thing. 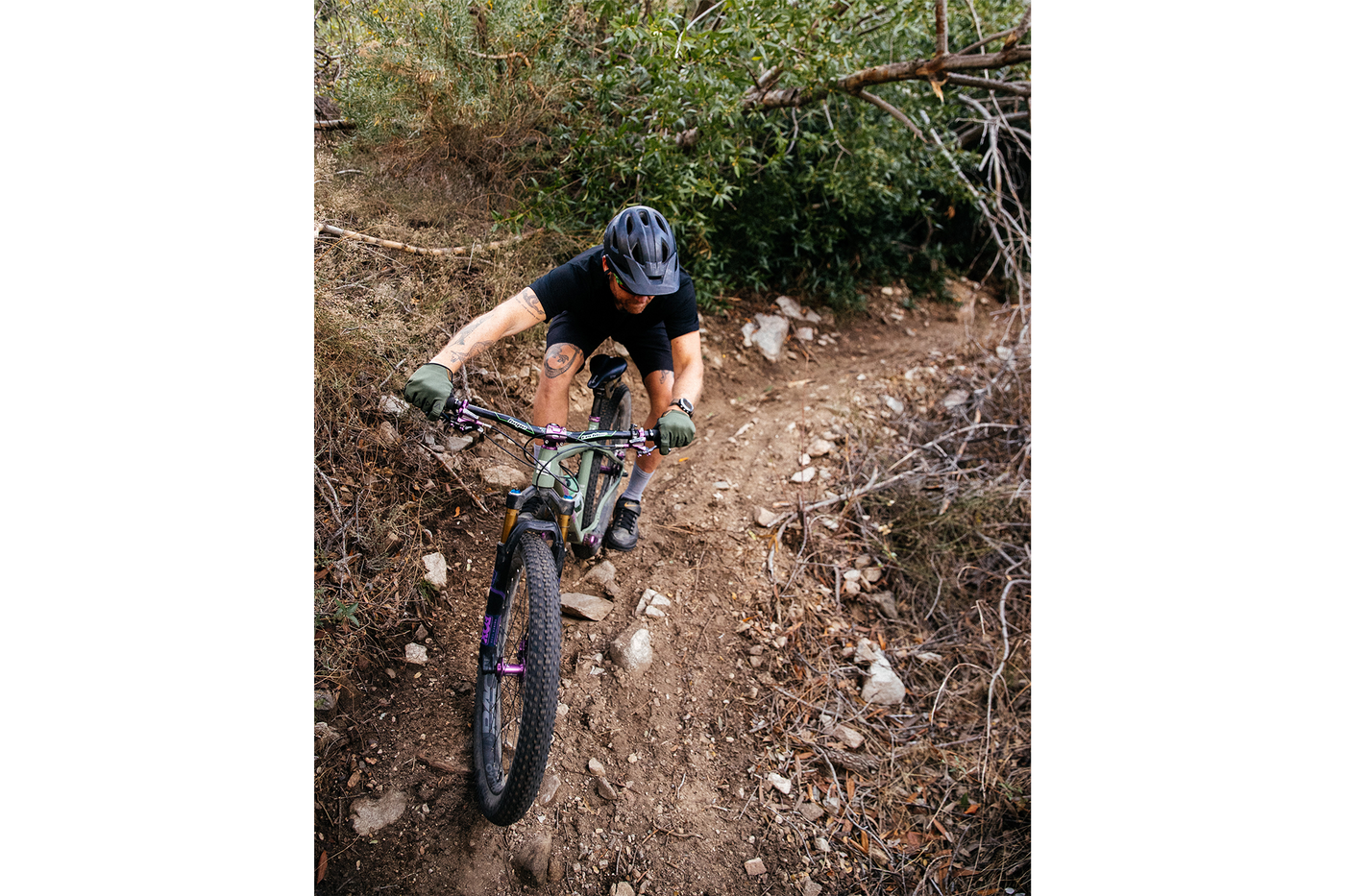 With big, fat, traction-friendly tires and a short rear end, even out of the box I was amazed that I, of all people, could wheelie this bike for a block with ease. On the first ride, whoops and dips that I’ve always tried to manual over were suddenly easier as well. There’s a magic numeric triangle that results in a wheelie-friendly bike, but if that triangle gets too skewed, it can drastically affect how the bike rides as a whole. For instance, if the rear end is too snappy and the front end is too slack, or floppy, it can get real interesting, in a bad way for me. The back of the bike is like “PARTTYYYYY!,” meanwhile, the front is like “NOT SOOOO FAST…” Figuring out how to make a bike responsibly party is Santa Cruz’s MO. In an industry where everything seems to be going in the “longer, slacker, lower” direction, SCB prefers a bit of moderation. 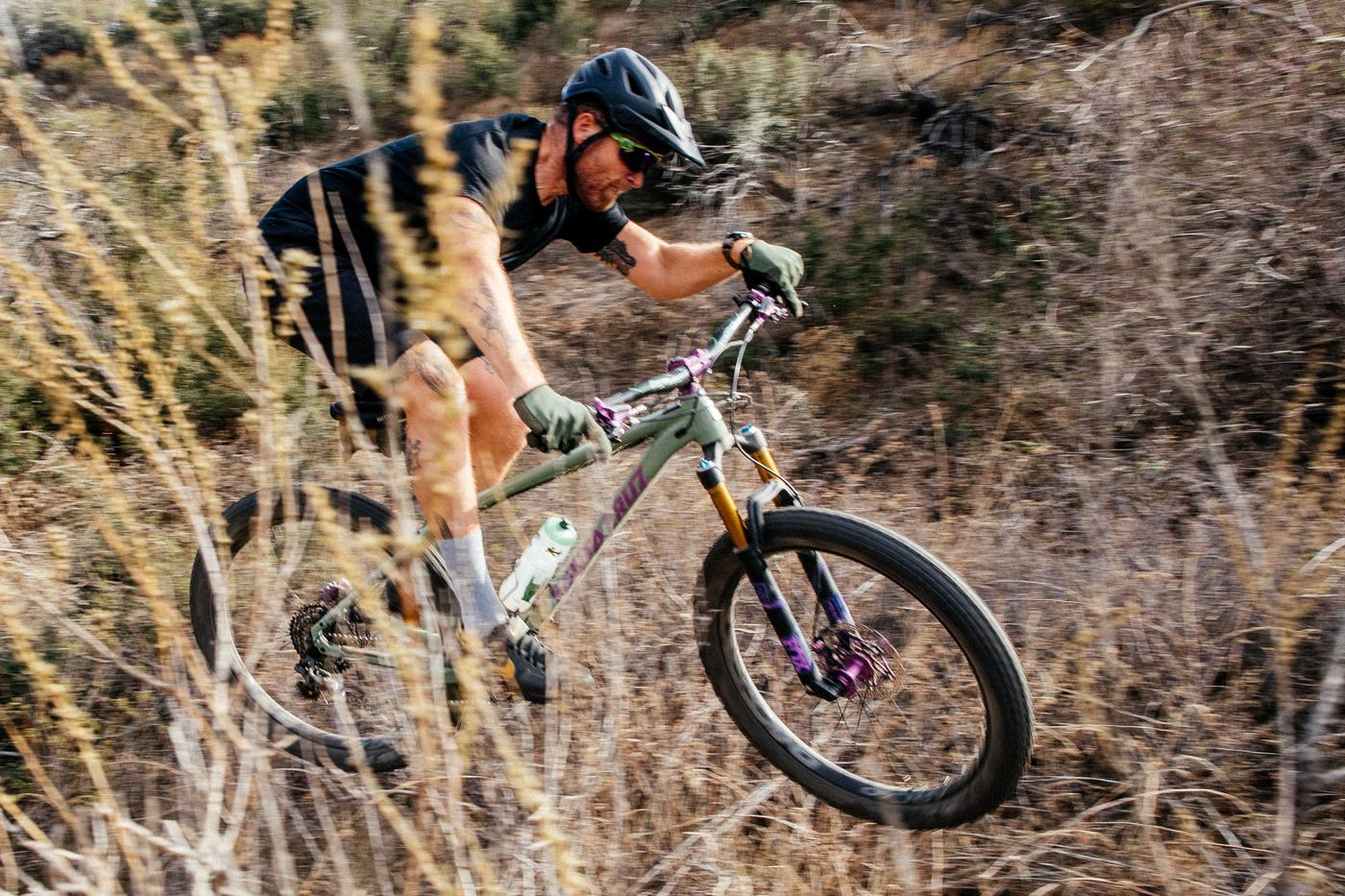 Before we go any further down this review chute, let me just say my only critique of this bike hasn’t changed from when I first saw it launched on the SCB website last year: why is the stack the same for the entirety of the sizing lineup, save for the XL? 615mm is not a lot of stack. Not for a 6’2″ human with a 36″ inseam. While it does wonders for the photographic stance of the Chameleon, especially with the saddle slammed, it does create a bit of discomfort for me while climbing for 2 hours up a mountain, usually hauling a camera bag and snacks. I eat a lot of snacks too! 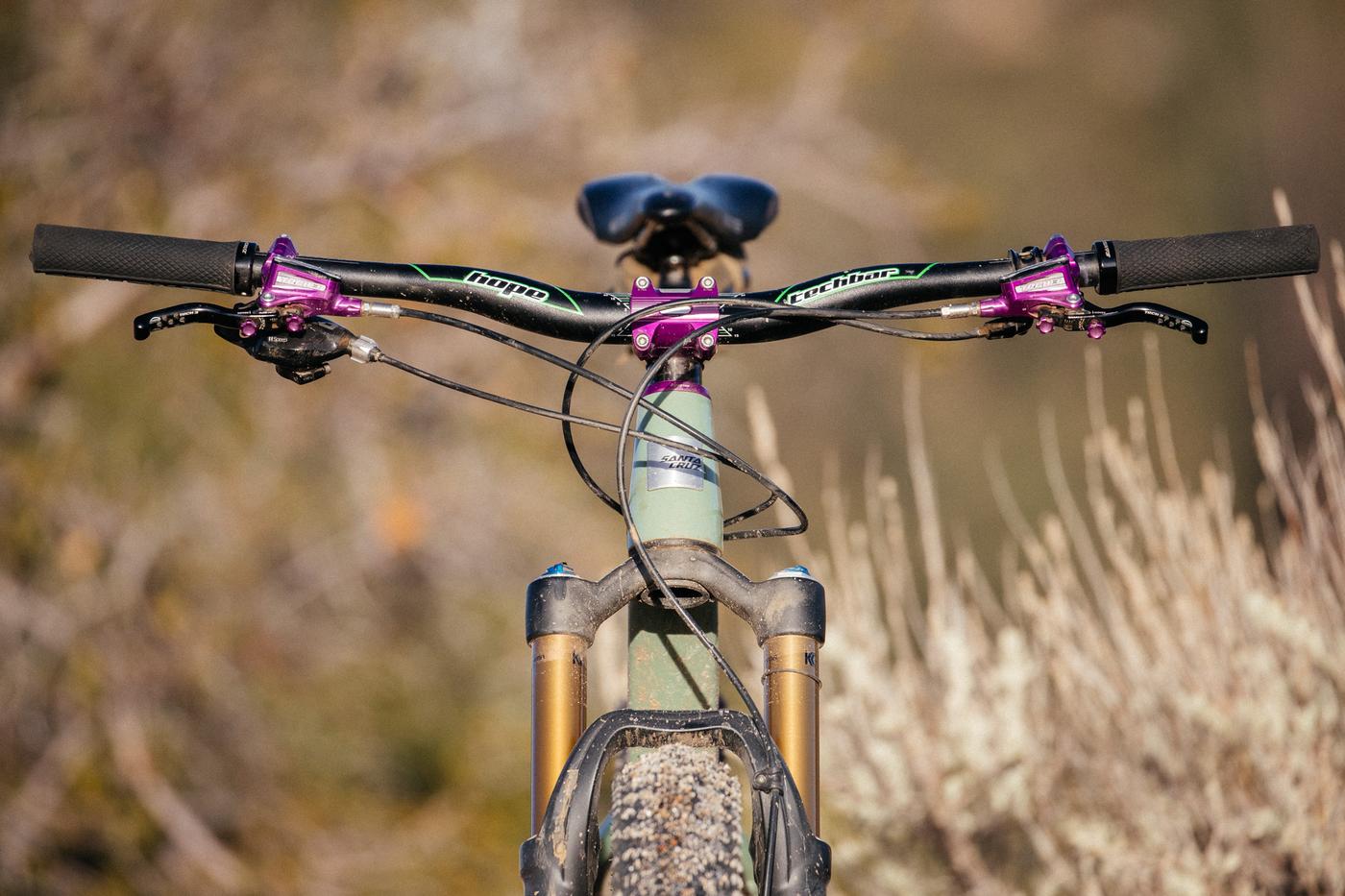 There are two points I need to make here. The first being, I’m usually in between an XL and a L frameset with Santa Cruz and that applies to the Chameleon as well. With the XL, I would have gained more stack height but would have lost some of the snappy responsiveness due to the extended reach. Also, since this bike was built up as a show bike, the steerer had been cut down, so I’m not even sure it would have fit on an XL. That being my last point: normally, if the steerer was longer, I would have just put a few more spacers under the stem to compensate for the low – to me – stack. All this aside, the Chameleon has always been that interstitial design between a DJ and a HT. Did I make the wrong choice in reviewing the size large? I don’t think so. The experience of throwing this bike around, jumping it, and descending the “steeps” much faster than I ever have before has a lot to do with the size frame I selected. I’m able to get wayyyyyy far back behind the saddle on tight switchbacks, pull up easily to manual or wheelie, and really flick it around on jumps. 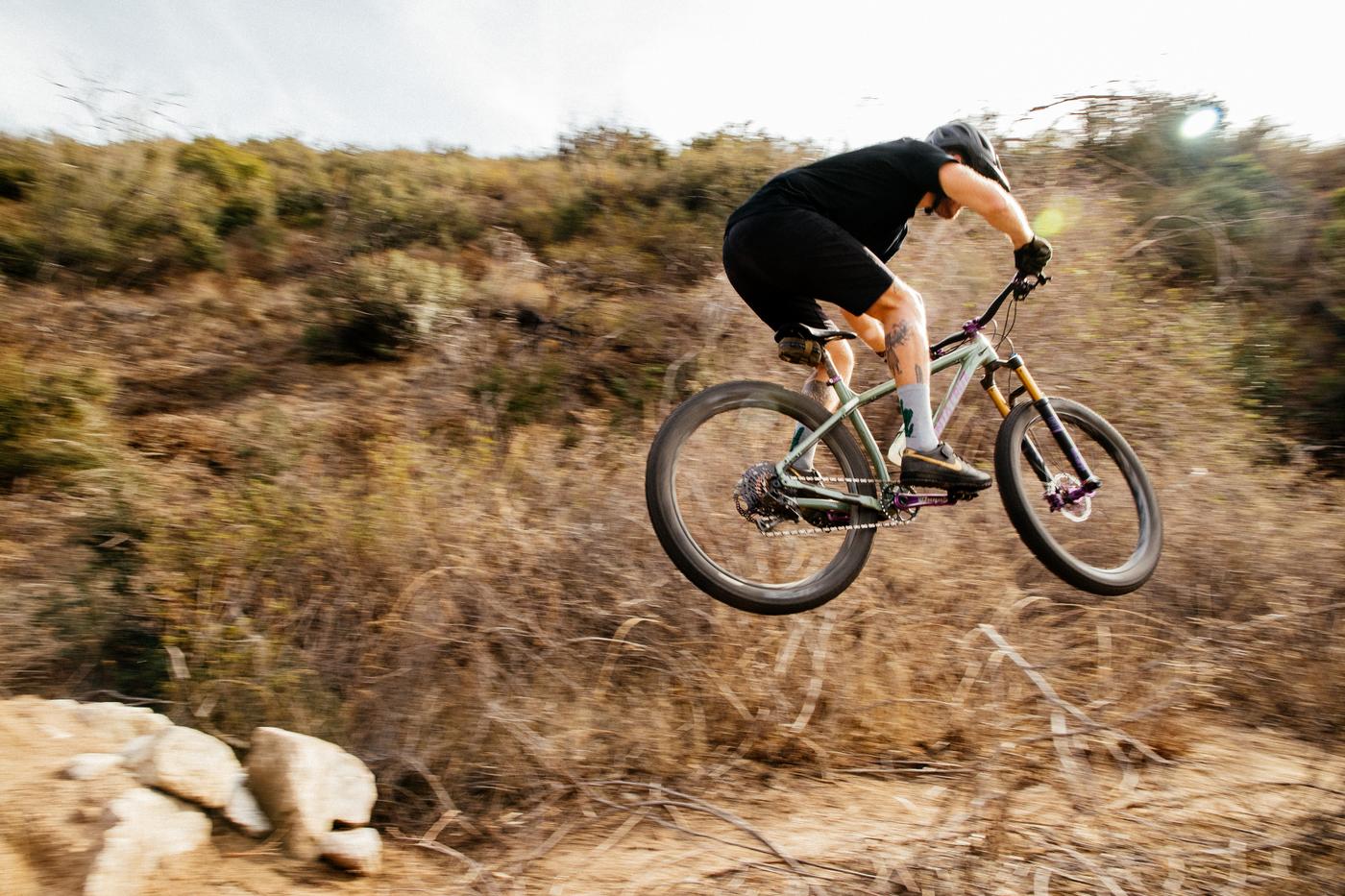 Charles Darwin is my homie. His theory of evolution helps us all understand how this world became so diverse. The short of it is: environmental influences affect the phenotype of living creatures over an extended period of time. The Chameleon has done a damn fine job at adapting to the current MTB environment and save for a few snags, it’s established its space within that realm, marking its territory with a flashy display of colors, thanks to SCB’s art department. I think we’re all at the agreement that no bicycle will do everything we want, well. There’s always going to be a compromise. That said, if I lost all of my bikes and had to buy one frame, it would be the Chameleon. Head to Santa Cruz Bicycles to see the specs, your local dealer to test ride one and to the comments for any questions!