Recently, the Navajo Nation reinstated a 57-hour weekend lockdown due to the spikes in COVID in several communities. This put a hold on our first official Dzil Ta’ah Adventures youth bikepacking series outing in Nazlini, which was originally slated for September 26th. Once the lockdown is lifted, which we hope will be soon, we will proceed as planned with the Dine Composite participants. With the postponement of our first trip, we felt like this was an opportunity to leverage the extra time and continue to shape our mentorship program and build more of my team’s dexterity with an outing in John’s Canyon, Utah, at the southwestern base of Cedar Mesa. In Dine (Navajo) creation stories, the first leader was known as Changing Woman and was responsible for creating the Dine people. By rubbing her skin in several areas of her body she made four couples who are said to be the ancestors of our people today. Prior to their emergence into the current world, Changing Woman assigned an identity to each group. These became the four original Dine clans. Each clan was also given a precious stone, a protector animal, and traits that would ensure prosperity when all clans prayed collectively. Of those four clans, the Kin yaa’áanii (Towering House People) was given a white shell (which became the sacred white shell medicine bundle), the bear as the protector, and the attributes of respected leaders, guides, and teachers. As our youth bike pack program begins to evolve and more youth gain interest, we felt it was important to create a mentorship program to support our youth trips and empower a few members of our community interested in taking on more of a leadership role. This mentoring team would assist new participants with bike bags, packing gear, setting up camp, camp cooking and so much more. This leaves the instructors – myself and Nadine – with the bigger picture duties and logistics. This mentorship element to youth trips worked well for Lael Wilcox and the G.R.I.T. program, so Dzil ta’ah thought it would be great to incorporate the same. With this in mind, we recruited three siblings: Jaron, Janessa, and Jodessa to help with running future youth bike and packrafting events, as this fall series is only the beginning of what we hope to run on an annual basis. This seemed fitting as all three are of the Kin yaa’aanii clan. It is in their blood to be leaders, guides, and teachers. The current Navajo Nation lockdown begins at 8:00 pm on Fridays and ends the following Monday at 5:00 am. This gave us a little wiggle room as we planned to meet up prior to curfew near the start of our trip at Valley of the Gods just across the state line in Utah. An early start is best as the route we planned has so much to see. The team showed up at my house at 4:00 pm Friday evening. Thankfully Nadine and I started separating gear, food, supplies, and setting up two of our singlespeed bikes we were lending, earlier in the week.

We arrived at Valley of the Gods just before dark to practice setting up a new UL 3 person tent donated to the mentor group by Big Agnes, as well as sleep gear acquired with a Go Fund Me set up earlier this year by Liz Scully at Four Corners Guides. We also spent some time practicing with the donated Snowpeak Titanium starter cooking kits as well, enjoying tea and hot cocoa, while we waited for our friend Josh to arrive. The kids were so excited to use all of this amazing new gear. John’s Canyon seemed like a perfect destination for us to take Jaron, Janessa, and Jodessa on their second overnight bikepacking trip for several reasons: it is situated near, but outside, the Navajo Reservation (and associated lockdown); the area is packed with visible and storied history; and, not knowing exactly how the girls would fare around 20 miles per day on loaded singlespeeds, the route itself traverses a dirt road ranging from graded to chunky surface with relatively manageable elevation relief. Located in a rugged gorge southwest of Cedar Mesa, UT – just below the Bears Ears area – John’s Canyon would be our ultimate destination for the weekend. The canyon was named after John Oliver, a cattleman who ran his herds in the area in the 1930s before he was murdered by a horse thief who also used the area to hide his loot. The continuum of occupation around Cedar Mesa spans a much greater timeframe than that of John Oliver. Beginning with the Clovis period 12,500 years ago, the basketmaker era in mid-BC to early AD, great houses in 1100 AD with connections to Chaco in New Mexico, the Ute, Paiute, Navajo, then the Mormon explorers in the late 1800s, and more contemporary ranching and oil/gas interests. Physical evidence of these occupants is everywhere, if you look in the right places — from densely concentrated petroglyphs on the desert varnished boulders along the cliff bases to cattle gates and historic automotive debris. Additionally, the Hopi people tell stories of their ancestors emerging from the Natural Bridges canyons above where we ultimately ended up camping and there are remnants of ceremonial Hopi kiva in a tributary canyon further down. 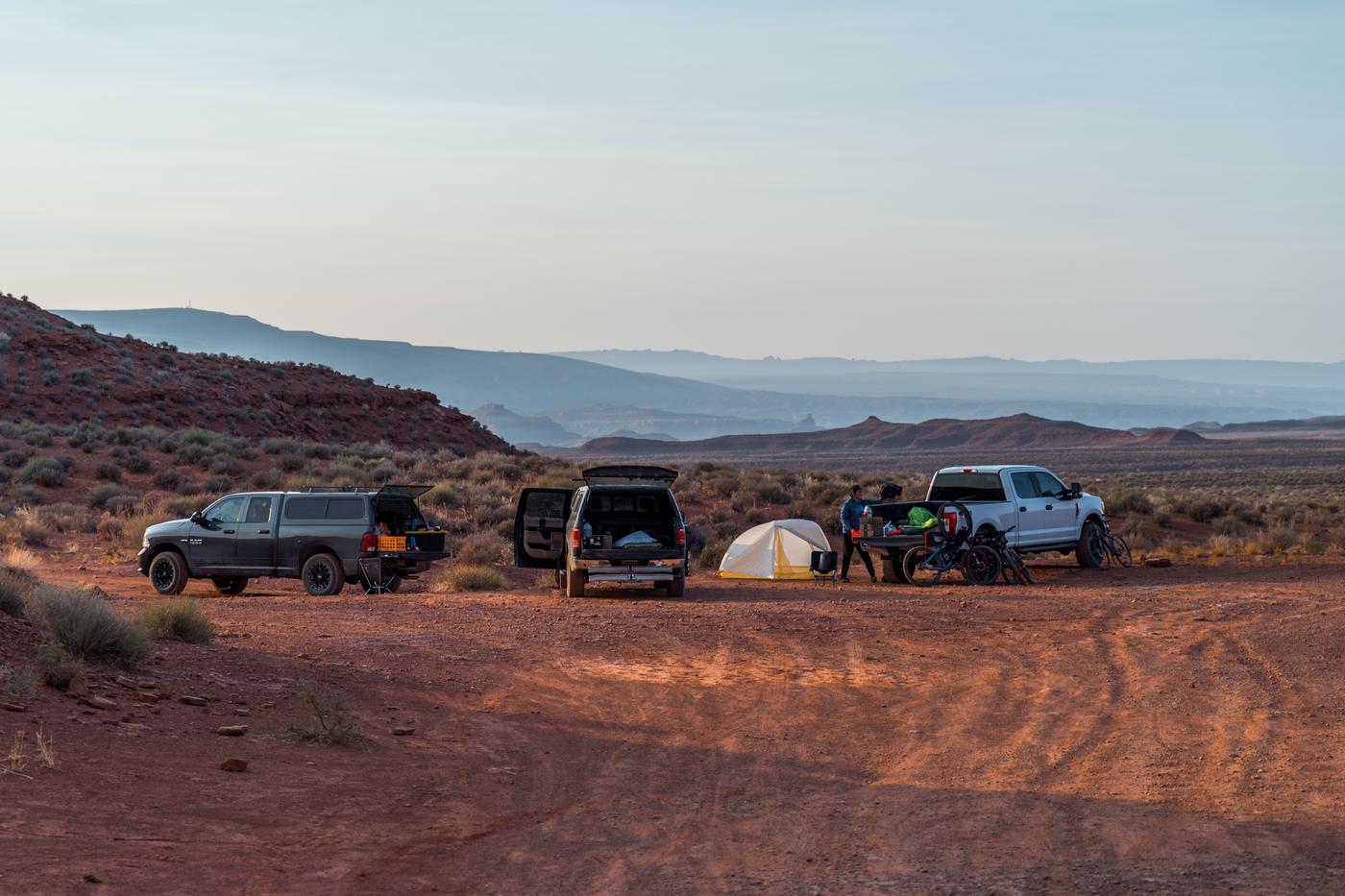 Following a quick camp in the backs of our trucks in Valley of the Gods, we woke up to a beautiful crisp early fall desert morning and made our way to John’s Canyon Road (BLM244) just north of Goosenecks State Park. After parking off the side of the road and loading gear on our bikes, we were off. A few miles in we rounded the base of Muley Point and started to pull over often to observe multiple large panels of petroglyphs. A majority of the rock art we observed depicted game animals, migration stories, and even dogs. One, in particular, stood out: what appeared to be an older gentleman in a turkey feather robe, with a leash attached to another dog. Being a fan of Craig Childs, I always try to view the rock art in a practical sense and almost all the game images was accompanied by vertical zig-zag lines that I inferred as trails or what could mean game access to the San Juan river below, clearly marking a choke point for hunting. But this is my story and that is what I saw. Dine elders always say that we should not be near ruins or places once occupied by Ancestral Puebloans. The reasoning is that those people had very powerful magic which also led to their fate. Their ability to climb walls and build intricate dwellings echoed those beliefs and if we disturbed them, harm or sickness can befall. Also, people wishing to do harm are said to get their bad medicine from those places. The other side of the coin though, is that some Dine stories tell that the Kin yaa’aani people came from ruins near Chaco in New Mexico, hence the translated name “Towering house people.” Jaron, Janessa, and Jodessa’s father’s side clan is Tse Njikini or Cliff Dweller/Among the rocks people. So in a sense, we do have deep connections with this land. Further on down the road, wrapping around the canyon rim to the west and massive Coconino sandstone formations to the east, we veered north along a dry creek bed to a natural spring, which is something very rare for this area. The group took a long break here filtering spring water and resting. Instead of continuing on to make camp further down the canyon, we decided to set up near the spring to take advantage of the abundant water and shelter from potential wind that could pick up overnight. The kids even got to experience an important field repair, as one of our tent poles, and the shock cord inside broke and needed to be splinted in order for the tent to stand. Luckily Josh had a pole splint with him and we were able to work together to create a solid solution to the problem that could have really put a damper on our evening.
Once tents were up, we stripped the remaining heavy gear from our bikes and continued into the canyon to experience the sun setting behind the western canyon wall before climbing back up the road to make dinner and enjoy a campfire. We visited more pictographs along the road and marveled at the massive swaths of cryptobiotic soil blanketing the landscape. I was thankful that we had the opportunity to practice with the burners on the tailgates of our pickups the evening prior, as the group prepared their own dinners and proceeded to filter more water in the spring next to us for breakfast. All unprovoked. True adventurers were metamorphing before our eyes. When asked to highlight their favorite things about the trip, Janessa said she “liked the scenery, going places she’s never been and learning how to use the Sawyer water filter, because it saved her life.” Jodessa said she “enjoyed riding all day, the camping and the feeling of climbing with a single speed.” That it was “just like riding a horse, in that balance was important and you have to use your entire body to climb the punchy ascents.” Jaron loved all the descents and is looking forward to even bigger drops on the next trip. He also said it was nice to just get away from the daily drama, COVID, and take a break from his online college courses. All in all, it was a perfect weekend. I think some valuable objectives were met. Considering the kids didn’t have much experience with this sort of outing, they did great. Having coached high school sports in the past, I was reminded of the satisfying feeling from the kids clicking with the things I had shown them. In my eyes, they learned so much in two days, which I hope will translate to successful future trips and enable them to transfer their newly acquired skills over to other youth participants.