Years ago, after finishing the slowest-known-time attempt on the Oregon Outback during its 2nd annual ride, I wound up in Seattle.  Just to clarify for those familiar with our rolling squad of rodeo clowns from that year, we didn’t shit in that dudes yard, we were drunk in the woods 40 miles behind because we couldn’t even make it to most peoples 1st night camp on our 2nd day.

Any who, I had met Jason from Swift on the train to the start and he was wonderful.  When I was in Seattle, I decided to roll by Swift’s HQ where I met Martina who was likewise wonderful.  At some subsequent time, me and Kurt aka Rat were musing about gear as was common for two recovering ultralight hiking nerds.  He was stoked on Swift’s new Hinterland series using Xpac instead of waxed canvas and vinyl, I loved the idea too but the lack of a Hinterland option in the Zeitgeist was a bummer as I couldn’t see myself particularly using any of Swift’s other bags.

We decided to reach out and ask, very sweetly, if Martina would be down to make us a pair of custom Xpac Zeitgeists,  She was down.  Sometime later, Swift decided to offer an Xpac Zeitgeist and I was able to finally wax poetic to the public about the bag.

Long story short, the bag was amazing and has been on every tour with me since then and I take full undeserved credit for the idea of the bag being made out Xpac, you’re welcome. Fast forward to early 2020, I’m having coffee with Martina and Jason on their yearly pilgrimage to Tucson for Instagram season and Martina tells me they have a new and improved Zeitgeist.   My interest was piqued to say the least, how could it get better?

The biggest update is the HDPE (read plastic sheet) insert that gave the bag a more rigid structure and shape when loaded and unloaded.  While I usually found the bag to ride fine when not totally loaded due to the structure facilitated by the dowel in the previous model, the liner is a welcome addition that only makes the experience of the bag more manageable.

The liner also keeps rigid items from becoming a poking issue when your thighs contact the bag when used as a seat bag.  The liner also greatly improves the security of the fit when used as a saddle bag, which reduces sway and all around makes for a more solid attachment.  In general the liner  makes the bag more cohesive and seems to be a natural trickle down of tech from the Fabio’s Chest.  If you prefer to run the bag without it, it can be removed too. 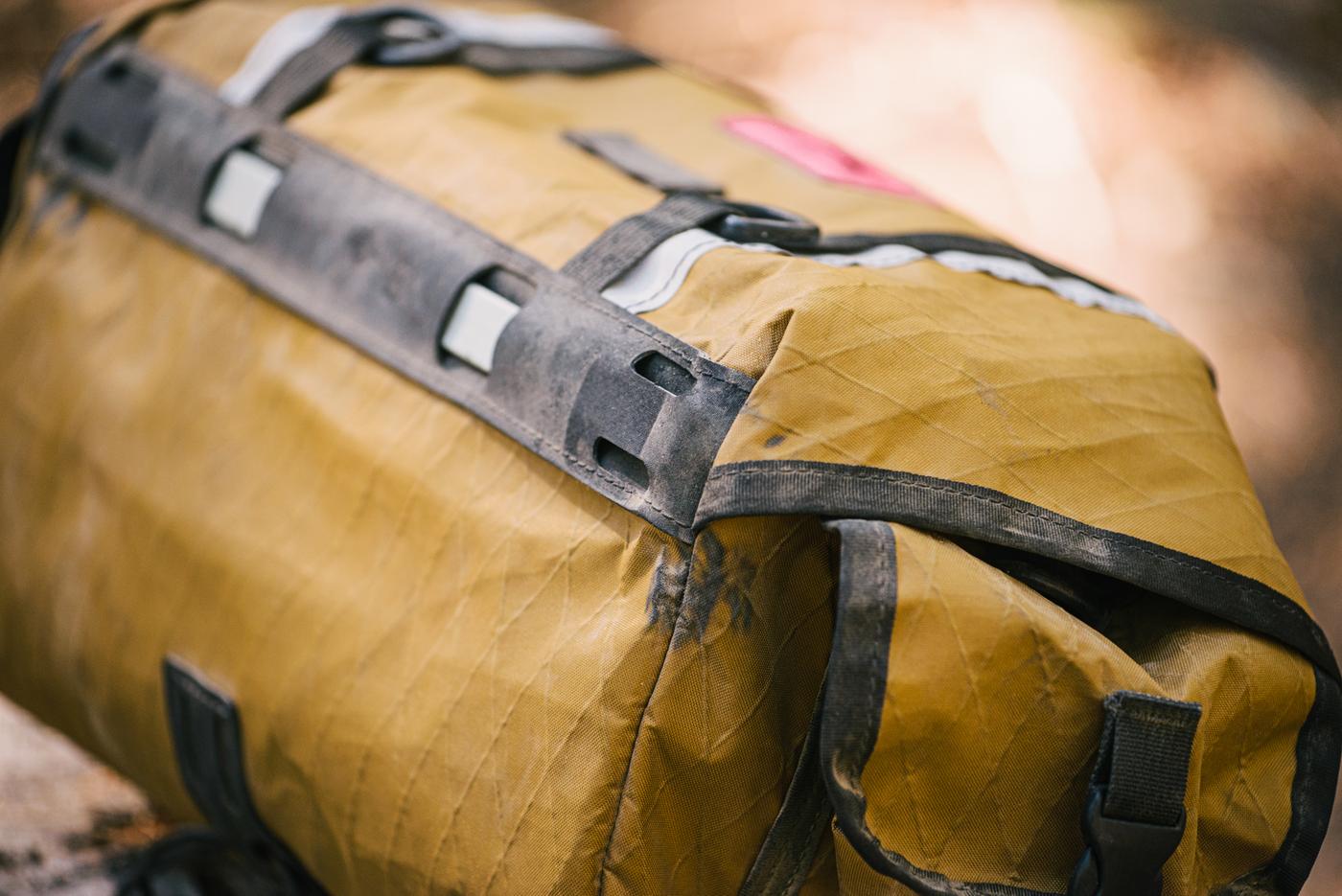 The other major redesign is the mounting system.  Replacing the two pass-through leather straps holding a dowel is a fiberglass rod sewn into Coverlite fabric with two mounting point options held with mini Voile straps.  This improvement helps most with making the bag much more water resistant as it eliminates four holes in the most leak prone area. While the bag isn’t 100% waterproof, Ive found it to be rarely an issue except for dunking it in a river or a huge deluge.

Previously I would just put everything inside in a cheap plastic trash liner and voila waterproof!  This is when the Ortleib pannier mafia roasts me for not caring about waterproofing on such an expensive bag, whatever.  The also redesigned cover flap has less seams for water to penetrate.  While not impenetrable the newest iteration of the bag gets all around more water resistant. 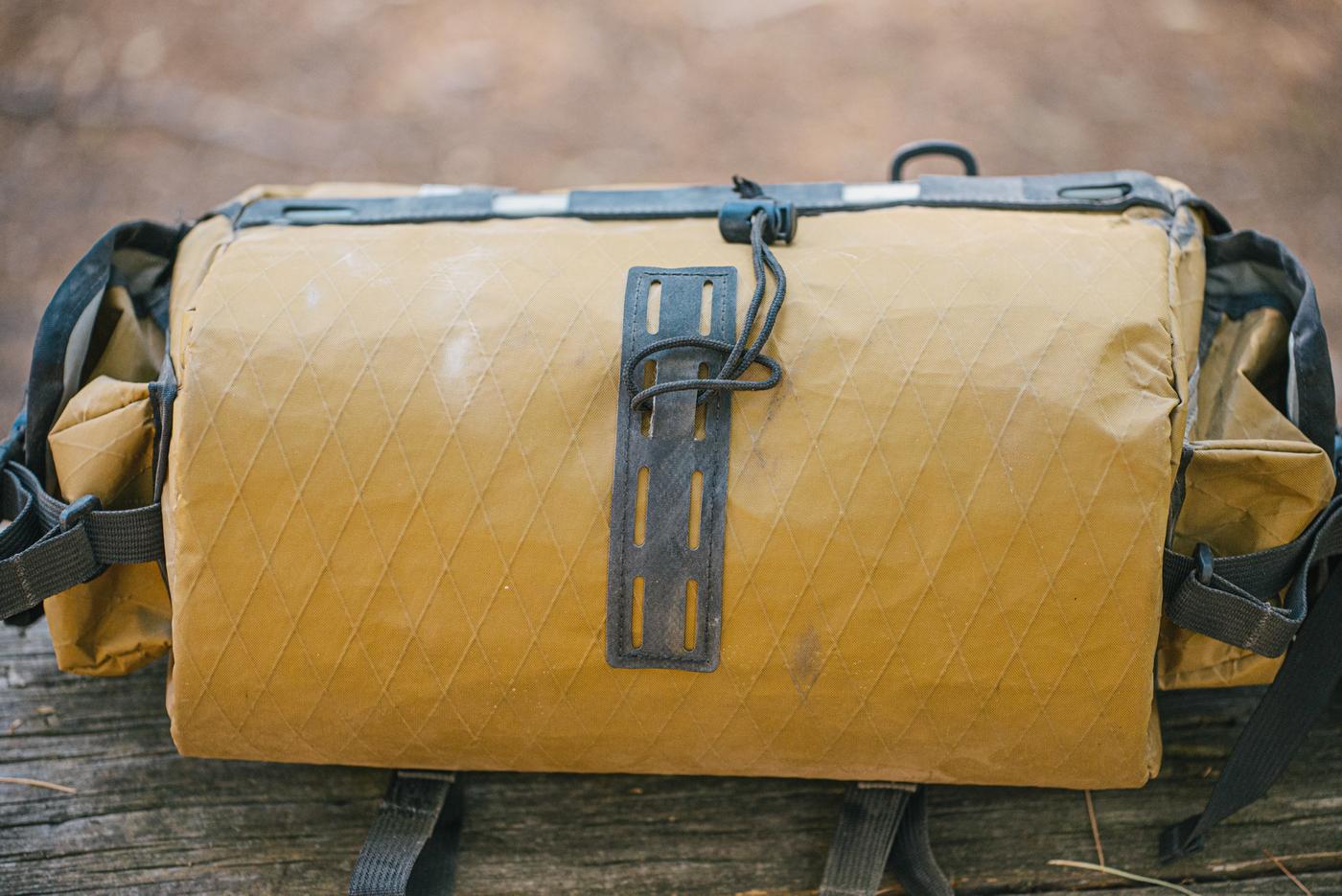 The two mounting positions are to encourage its use as both a handlebar bag and a seat bag.  I found myself using the same mounting position for my seat or handlebars due to the sweep of my mountain bike bars, but on another set of less swept back flat bars I was able to use the wider mounting points. The 6” Voile Nano straps are another welcome addition, one I had been using on my previous iteration as well, at least as soon as the thinner version was available.  For mounting on my handlebars I found the included straps just barely fit around my bars.

For mounting the bag on handlebars Swift sells an add-on “handlebar foam spacer kit” with longer straps and spacers which I recommend if you plan to run this bag on the front of your bike.  I used a set I had lying around from another bag for the images here.  I was able to mount the bag with out the spacers but it is not as secure a fit and required more finagling to not interfere with cable routing.  The lower mounting point that would attach to your headtube/seatpost respectively has also received the Coverlite treatment and has many options for angles and heights of attachment.

This comes with a piece of cord and slide lock that forms a girth hitch around the headtube or seatpost.  While this system is quick and simple, I found the slide lock to be inadequate for anything more than very casual riding while anything would jostle the slide loose, thus I recommend replacing it with another Voile Nano strap.  You could tie a knot in the cordage past the lock to prevent this slipping but at that point you might as well just tie in on and skip the slide lock.  If you were to use this for commuting or riding where it would need to be quickly removed, the Voile and cordage mounting is so much quicker and easier than the previous leather straps.

They have also added an two extra D-rings on the sides for easy use of a shoulder strap for easy transfering to a shoulder bag.  Even more so, they have made the old adventure option upgrade, two additional sets of D-rings on the flap cover, a standard option for all that extra shit you might need to strap on at a resupply.  The switch to Coverlite mounting points, additional mounting positions, and Voile straps upgrade have fixed the few small issues that I had with the previous iteration of the Zeitgeist. 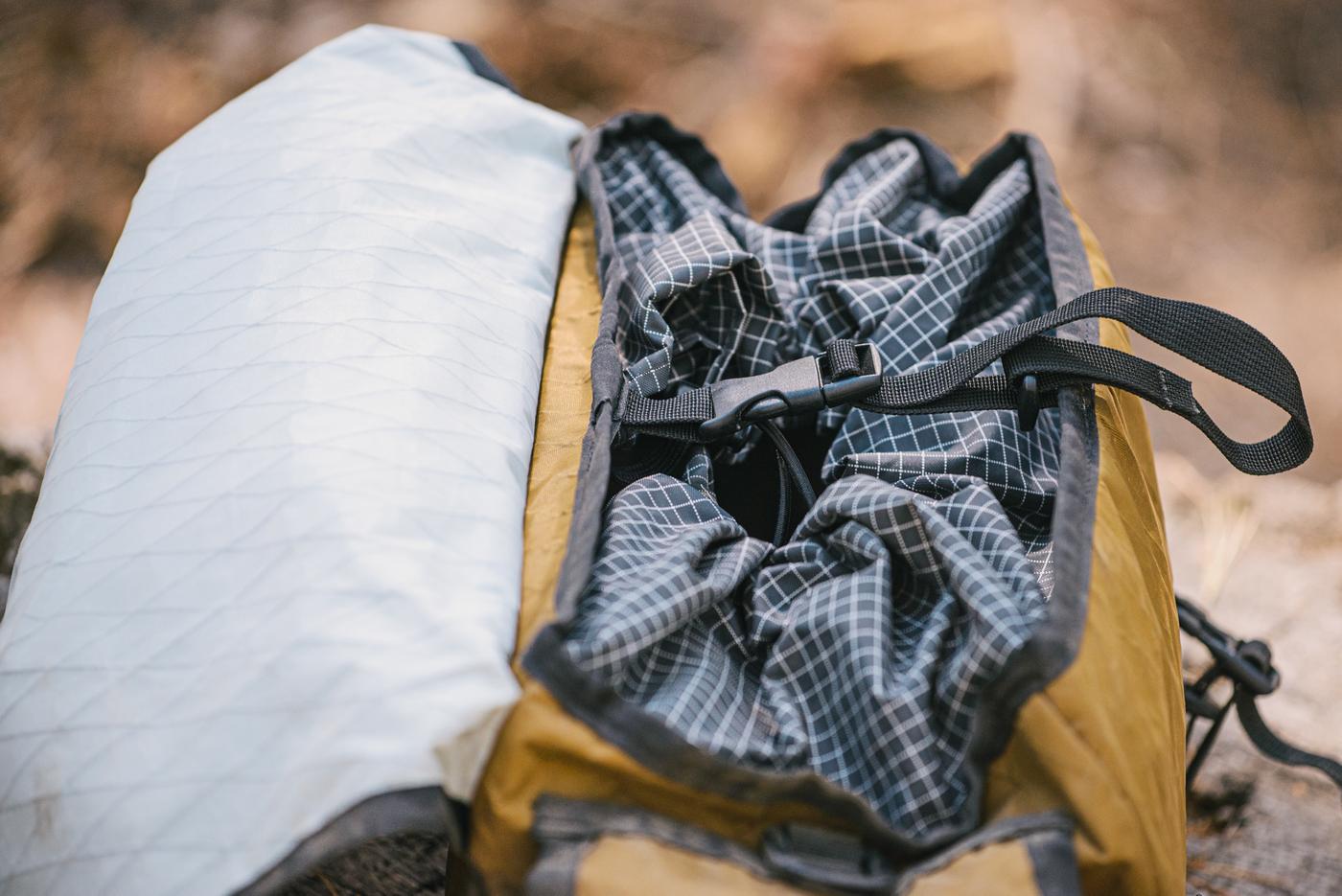 The other big change is an adjustable strap that cinches the center of the bag and keeps the load from sagging.  Previously, when the bag was loaded down it tended to sage between the two straps securing the flap over the bag, placing the sag squarely over your tire.

This new strap combined with the new liner make this a non issue.  On my previous iteration the only part I managed to break was a seam holding the drawcord after pulling excessively hard on it to tighten the load, even still Swift fixed it for me.  Additionally, they replaced the fabric cinching over the load with Gridstop fabric, which is ever-so-nostalgic for recovering ultralight hikers like myself. It’s just so lovely, those people at swift are just after my heart as always.

And for the elephant in the room, look at that coyote tan fabric that replaces the black Xpac, gawwwwwd damn does it look good c’mon.  I love black to make everything match easily, but after seeing the coyote Xpac on a Fab’s Chest some iterations back, I was smitten. Now my favorite bag comes with upgrades and an even prettier color, stop flirting Swift Industries. While we are on the topic of aesthetics, as far as saddlebags go, the zeitgeist is so much easier on the eyes compared to the typical butt rocket style saddle bag.  Previously using a Carradice style bag for style points came at the expense of the waved canvas weight, now you can have all the style and performance with modern fabrics. 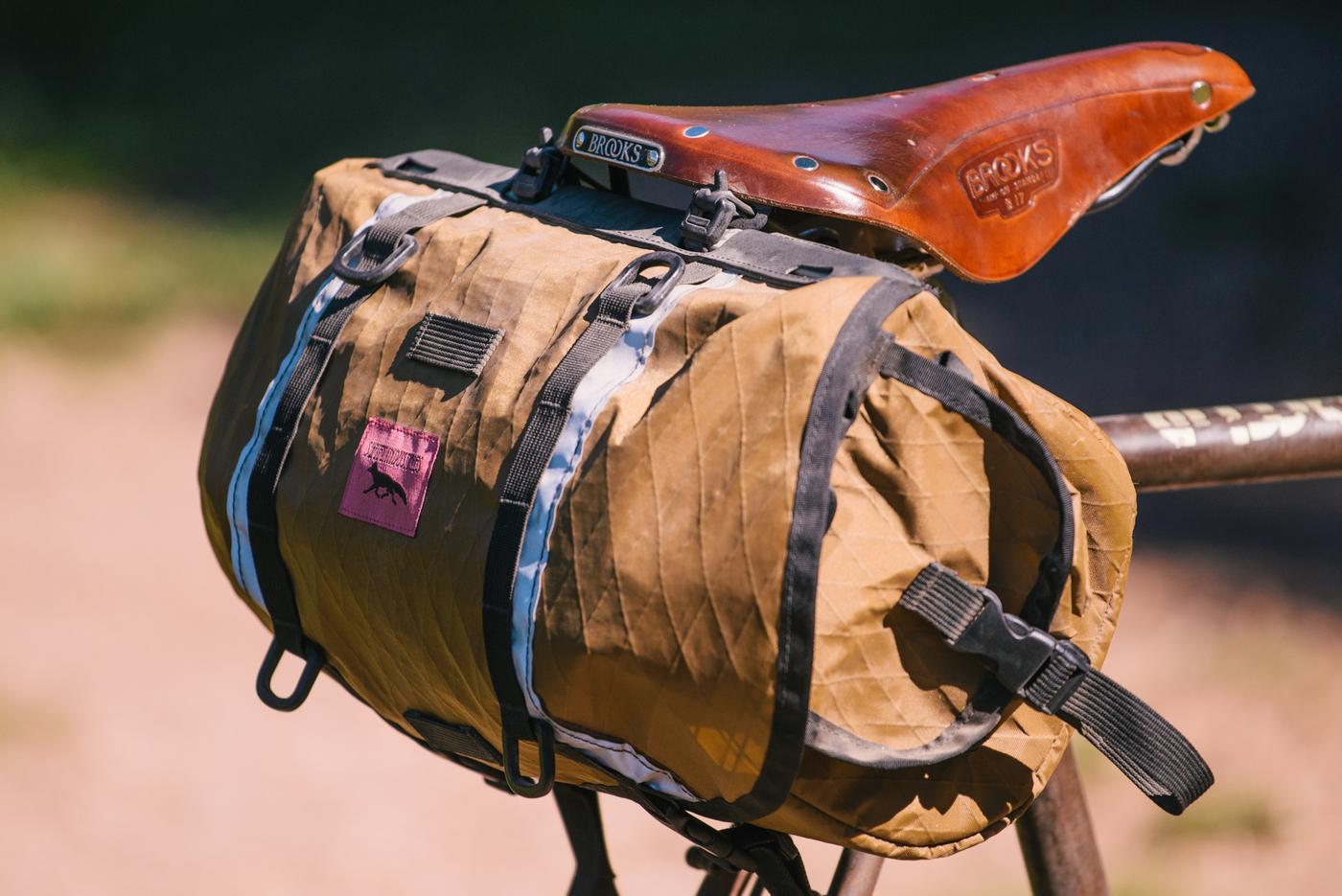 All of these additions and updates add up to a phenomenal bag, not that it wasn’t before, it’s just better in every way.  The only downside, and this is dumb, would be the weight.  The liner, extra straps, and what not weigh a bit extra, but xpac is still such an improvement from waxed canvas lined with vinyl that it almost doesn’t even matter.

One limitation is the mounting when used as a saddle bag which requires the mounting points found on Brooks-style saddles or with the addition of tabs from Velo Orange (available through Swift) or a Hobo Pieces mount.  I typically run a standard B-17 or Cambium C-19 (careful of the sharper edges on your straps) so this is convenient for me, but may be limiting for others. Though, with the ability to run the new Zeitgeist more easily as a handlebar bag will dissuade people to see it as solely a saddlebag. 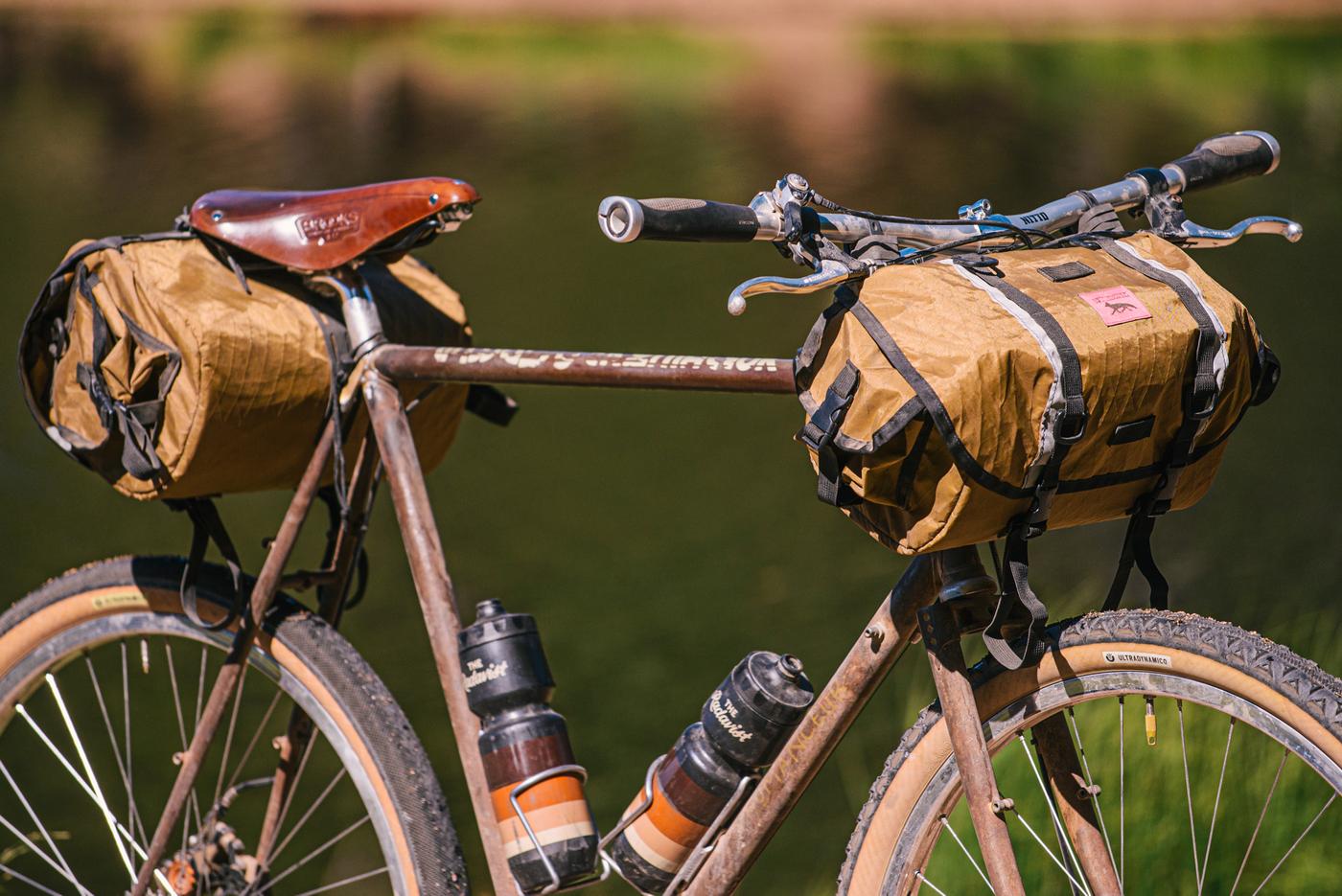 I was able to run two of these bags and a half frame bag for light multi-day touring or an overnighter.  If you pack heavier maybe consider picking up a Fabios Chest for your handlebars paired with a Zeitgeist on your saddle. With its capacity at 12 liters this easily matches the capacity of most handlebar rolls with the added ease of packing afforded by the shape and reinforcement of the bag.  I have been singing the praises of this bag for years and wholeheartedly recommend it still due to how wonderful I think it is and equally due to the amazing people who make it.  I still maintain that this is the best saddle bag on the market for bike touring in whatever form that takes for you and it only got better.

Check out more details or snag one over at Swift HQ, I heard a restock should be coming in the very near future.