Finding Ourselves in the Atlas Mountains

It has been a little more than 2 weeks since the start of The Atlas Mountain Race.
The proverbial dust has begun to settle and my friend Stefan Haehnel’s 35mm exposures have been developed.

For all racers, it is prime time to reflect.

People often ask me: how did I get into this kind of thing anyway? I did ‘race’ the 1st Silk Road Mountain Race in 2018, and that was the 1st big one for me. Previously, I had done bikepacking events like the 1st Torino-Nice Rally, and Camille McMillan’s fabled Further race as well as several mega 300km and even 500km efforts throughout and countless gravel events all over. Not to mention years of track, cross and road racing. Clearly, I like to push myself on my bike. But discovering my appreciation for actually pushing my bike is another thing entirely. ; ) 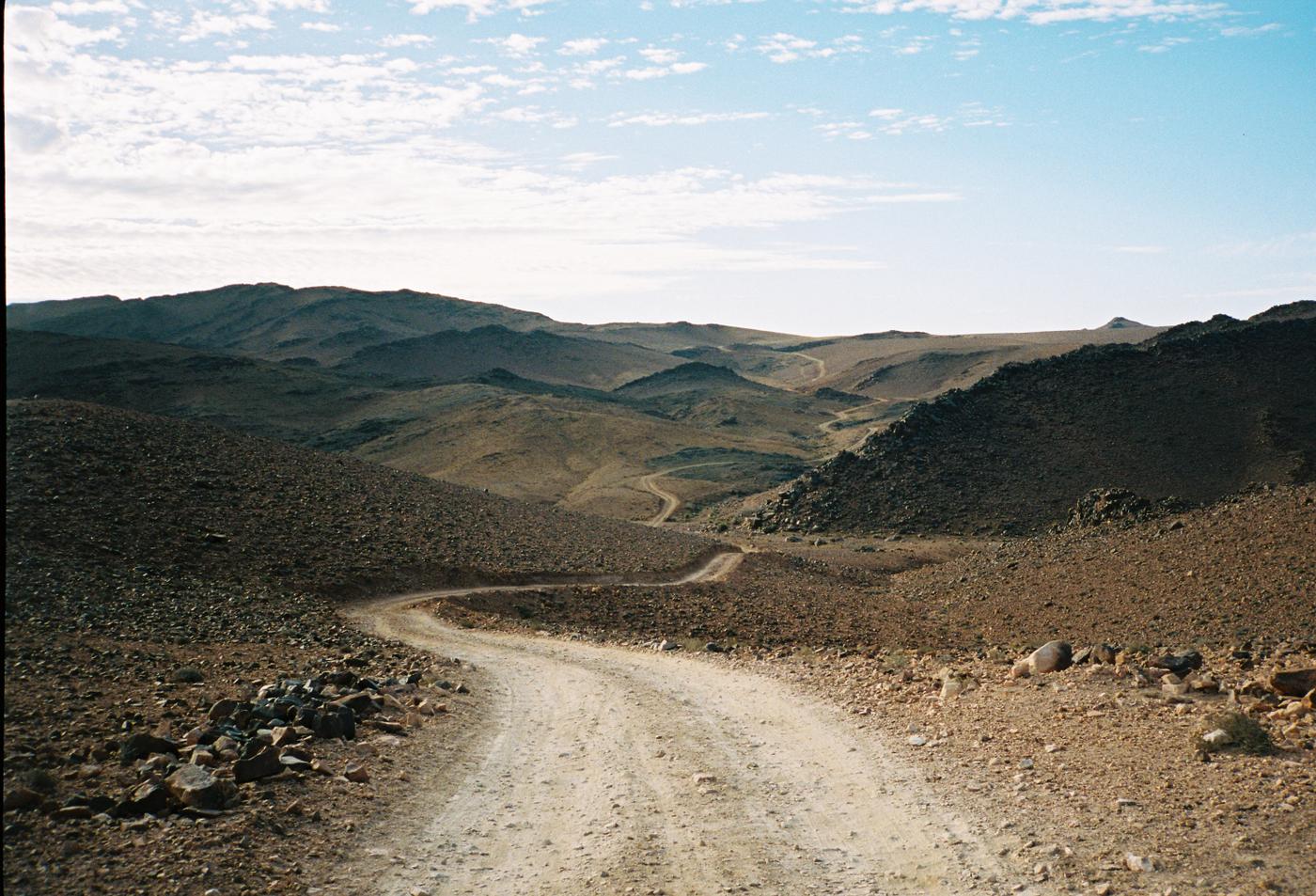 And, for the record, I never was a mountain biker. Nor, do I think, I ever truly will be. Hell, I keep bringing a what now is referred to as a gravel bike (technically, a cyclocross bike) to events like this. By that, I mean a drop-bar bike with limited tire size capacity and a terrain clearly favored towards the classic attributes of an Mtb. I guess that’s me ‘staying fixie’.

But I didn’t set out to write this about cycling subcultures, bike specs, ultra-endurance athleticism or even my own race recap. When Stefan asked me to write about my experience at the inaugural PEdALED Atlas Mountain Race—an unsupported 1,148km single-stage race through Morocco’s Atlas Mountains with 20,000m of climbing, I was honored and, though it took me a moment, I knew writing about my time in Morocco would more about what we all share rather then what I personally found there. 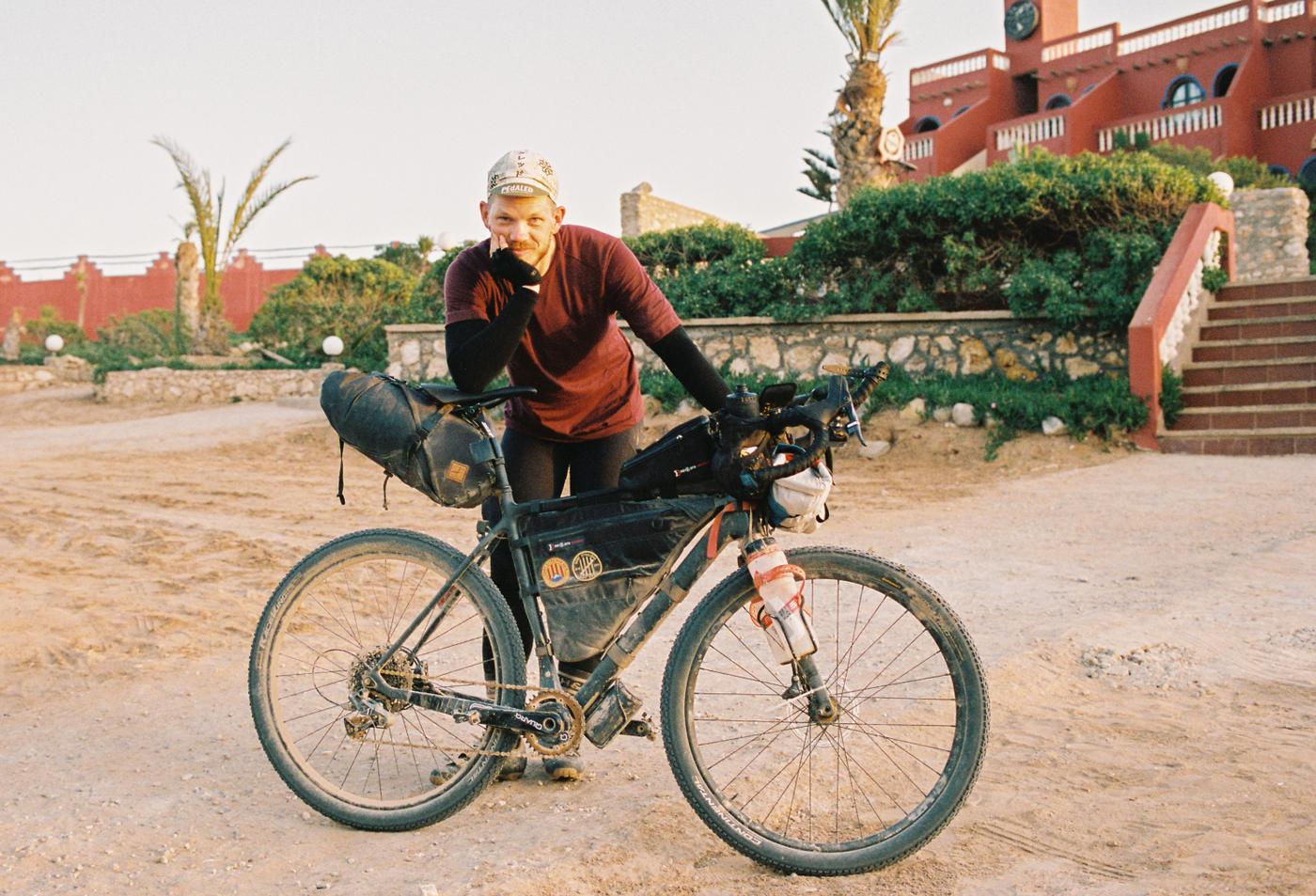 What are we all looking for that compels us to fuel this, for lack of a better word, fad? Don’t get me wrong, bike touring a la Rough Stuff Cycling and those before them and since, paved the way for this (see what I did there? That’s a gravel dad joke!). The potent combination of athletes turned influencers (or vice-versa), brands on the hunt for mega content and a renewed wanderlust in the cycling industry has made fertile ground for the success of bikepacking as an exciting off-shoot of gravel.

But I don’t actually think bikepacking is a fad. I think it’s the future. It fosters community, competitor parity across skill and experience levels, as well as gender, socio-economic and, obviously, cycling discipline backgrounds. I mean, the dangle mug pro-hobo vibe of California Golde is just as enticing as the too-dialed-to-dangle space whips with all the bells & whistles. To some greater degree, bikepacking and its races are about personality and self-expression even more so than achievement and build breakdowns. Sure, the winners smash it & we love to know their pack list of ingredients for success but the straggling underdogs and mid-pack peril is what really steals our hearts. Now we’re onto something. Mid-pack. Not the smashers or the scratchers. Mid-pack is my people, and, I wager, it’s your people too. We’re the people out there for modest reasons: exploration, experience and, dare I say, enlightenment. Fueled less by the proverbial podium prize or the back of the pack desire to survive (I’ve been there too, Lantern Rouge due to poor planning, illness, and mechanicals) but mid-pack is where the passion and pleasure is dosed in equal measure.

Mid-pack gives your mind and soul room to roam and your bivvy feels like home.
But aspiring for mid-pack solidarity, occasional middle-of-nowhere camaraderie fueled by being in it to grin it and not win it isn’t what it’s all about either. I think, based on my observations and conversations, everyone that embarks on a self-supported cycling adventure is looking for an escape. Some just are lucky enough to relish it more than others but we all share this calling. 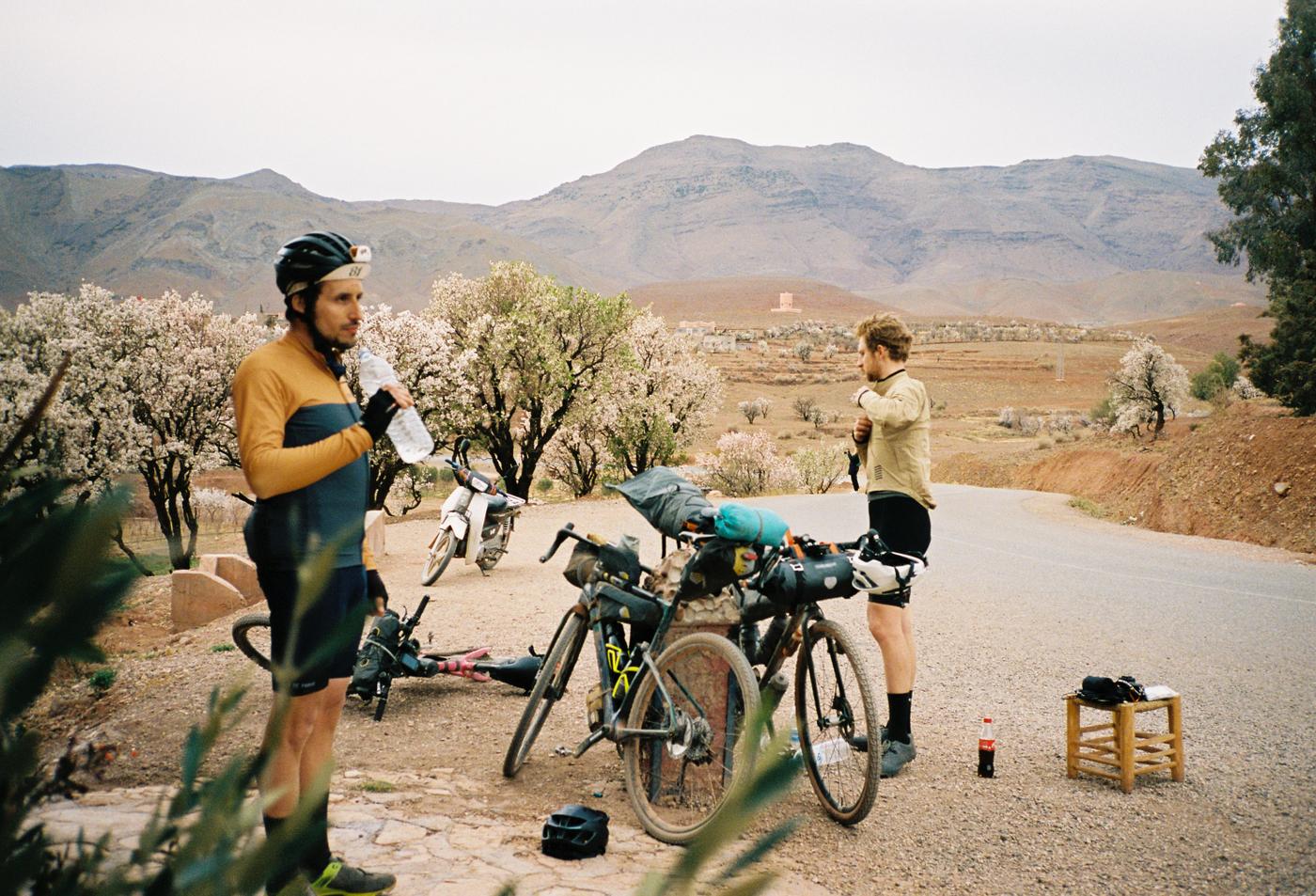 But I don’t even think escape is the right word. I think peace is the right word. We’re looking for peace. Our days are boiled down to necessities and the sole goal of moving forward at all costs. The solitude, consistent progress and even exhaustion are all peaceful. It is all existentially rewarding.

Peace is hard to find. But easier to find on the bike. When I signed up for Silk Road, I was still in a relationship where my partner didn’t support my aspiration to participate in events like these. In many ways, it was an allegory for how she didn’t support me nor my aspirations. Torino-Nice was supposed to be like a one-time thing and a clearly selfish endeavor. By the time SRMR #1 actually happened, I was in a new relationship. One characterized by mutual respect, adoration, and even awe. Kristy supported my trip to Kyrgyzstan. But the news that I received the night before the start (of losing a long and drawn-out custody battle) put me on my knees emotionally and mentally. 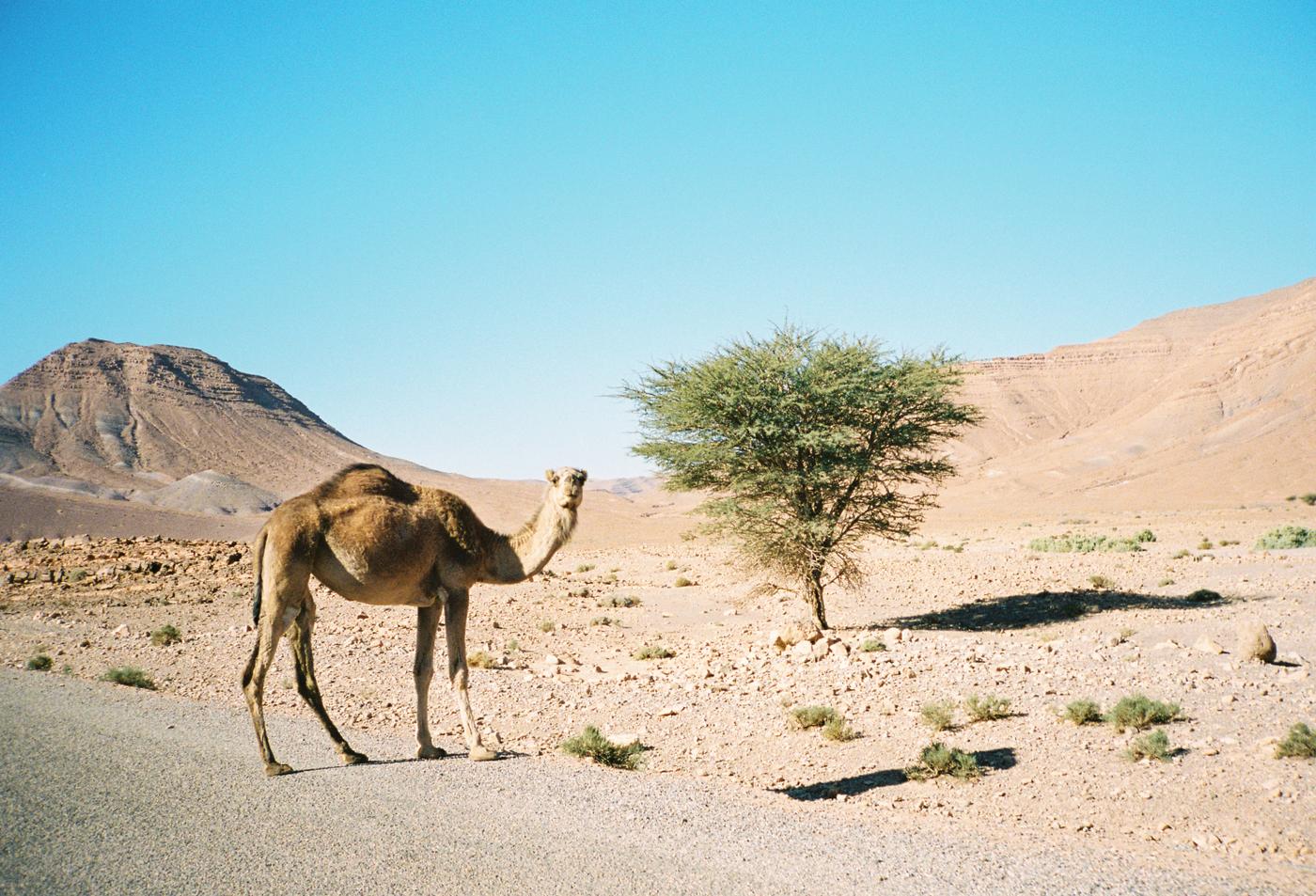 My effort in 2018 sparring with the reality I suddenly faced with my kids growing up in another country. I didn’t find peace entirely on my valiant ride to nearly making it to CP3 on time but I did come to terms with a lot. I also experienced a land in which many were perfectly content with far less than me. I gained perspective. I was also overcome with gratitude for the generosity I experienced out there from locals, especially when I was ill. I was grateful for Kristy’s love and my new life. It all countered my sorrow. I can honestly say it changed me for the better and in a few ways, The Silk Road saved me.

I came to Morocco with a different head on my shoulders. Deadset on completion but still happy to soak in the trail magic I encountered along the way with no plans to turn the screws. No, I was there to take in the views. For me, Atlas was everything I’ve stated so far and more: the camaraderie, the escape, the peaceful solitude, the mid-pack zen and most of all a chance to prove myself, to myself. Which, clearly is another trait that all competitors share: self-efficacy and the belief that we all have what it takes. Like I tell both my kids and my step-kids: show up and don’t give up! 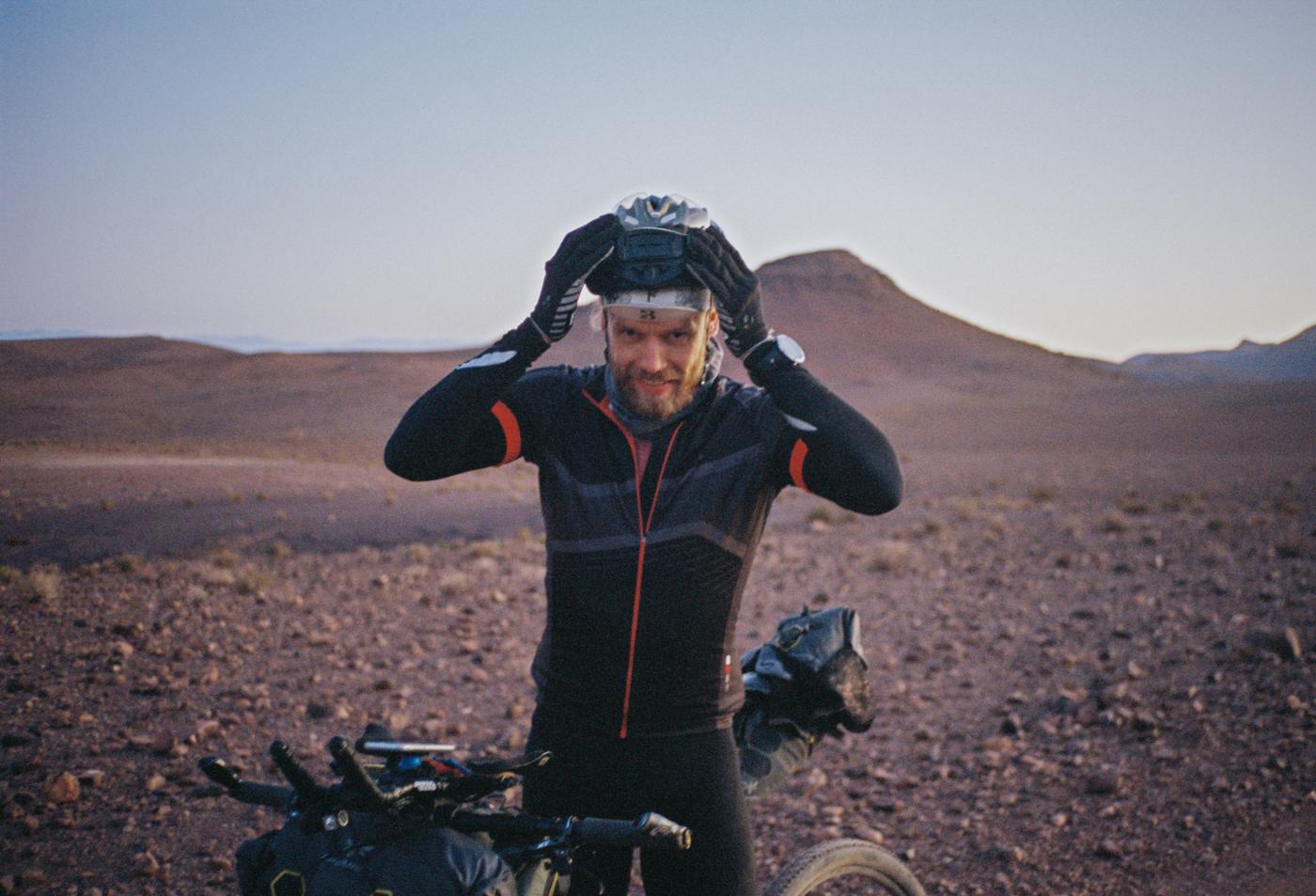 Not only did The Atlas Mountain Race give me what I came for, but it also provided those exasperated moments, those back of ‘Broke Bridge Mountain’ (the crumbled colonial roads en route to CP2) moments of complete fatigue and depletion. The sublime joy once you reach pavement and the pre-dawn hike-a-bike hours lost in your own philosophy as it’s dissolved down to its molten core ready to be reforged in a new way in the dawn of a new day.

I completed the Atlas Mountain Race with a spirit of gratification and gratitude for my life. Something that I’d struggled with even prior to the emotional blow before day one of SRMR 2018 not so long ago. That being said, I wasn’t grateful for the sand before the finish of AMR. That left me falling asleep next to my bike at 4 am in complete attrition. But maybe I needed that too. ; )

Maybe we all need to be fully empty to see what’s left. That goes for all of us, not just weird endurance bikepacker people. But this Type 2 visceral struggle that we’re so, like Jenny Tough rightfully stated, privileged to subjugate ourselves and equipment to. My friend Lian also referred to this as the ‘unraveling mind’. The inclination to bring yourself to this brink is perhaps my final claim of the trait we all share. It’s how we all really find ourselves out there. 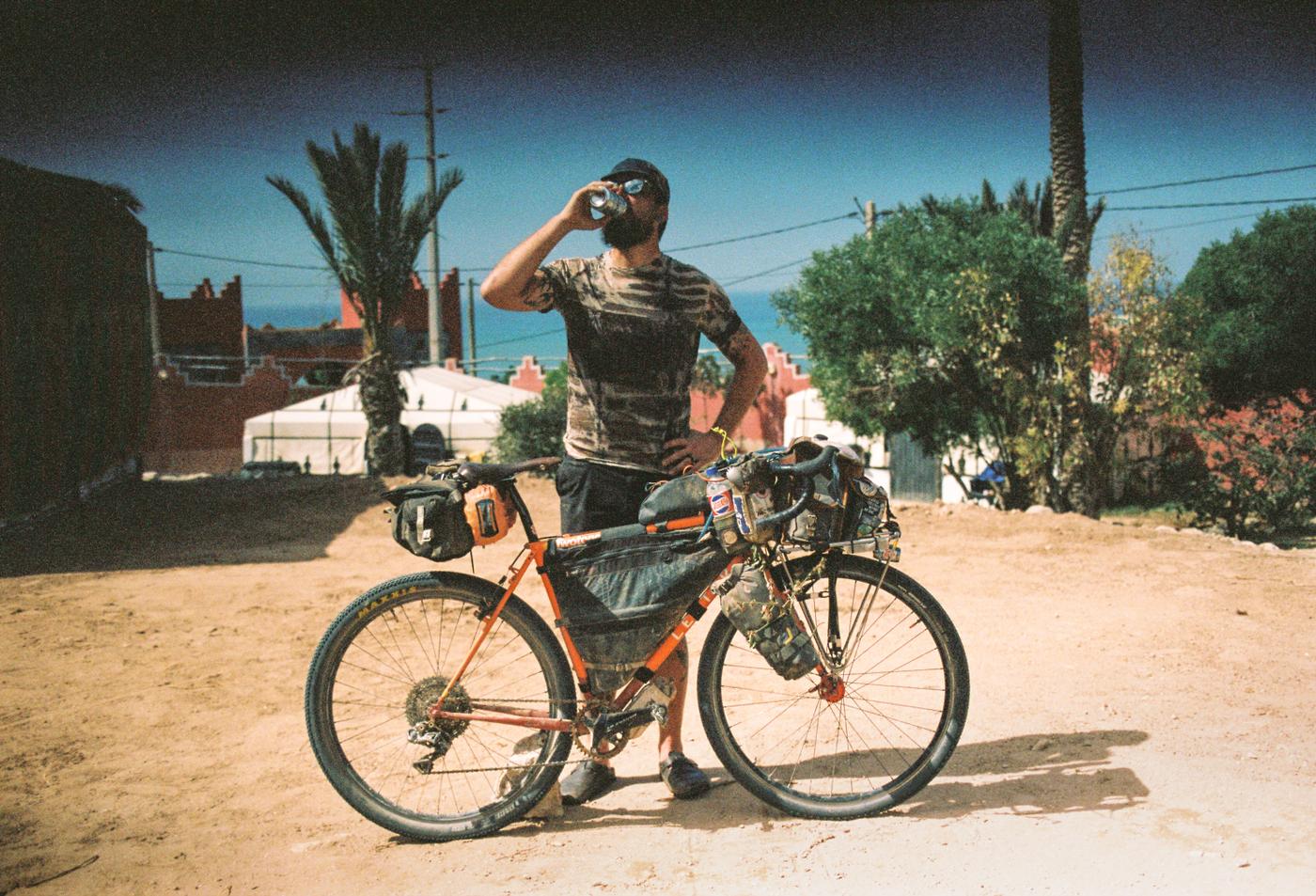 Thank you once more to Stefan for the chance to add my thoughts to his images, to Nelson for organizing, the sponsors for enabling it, Kristy for believing in me (not just in this race but every day) and thank you all for reading. Say hello if you ever swing through Amsterdam!