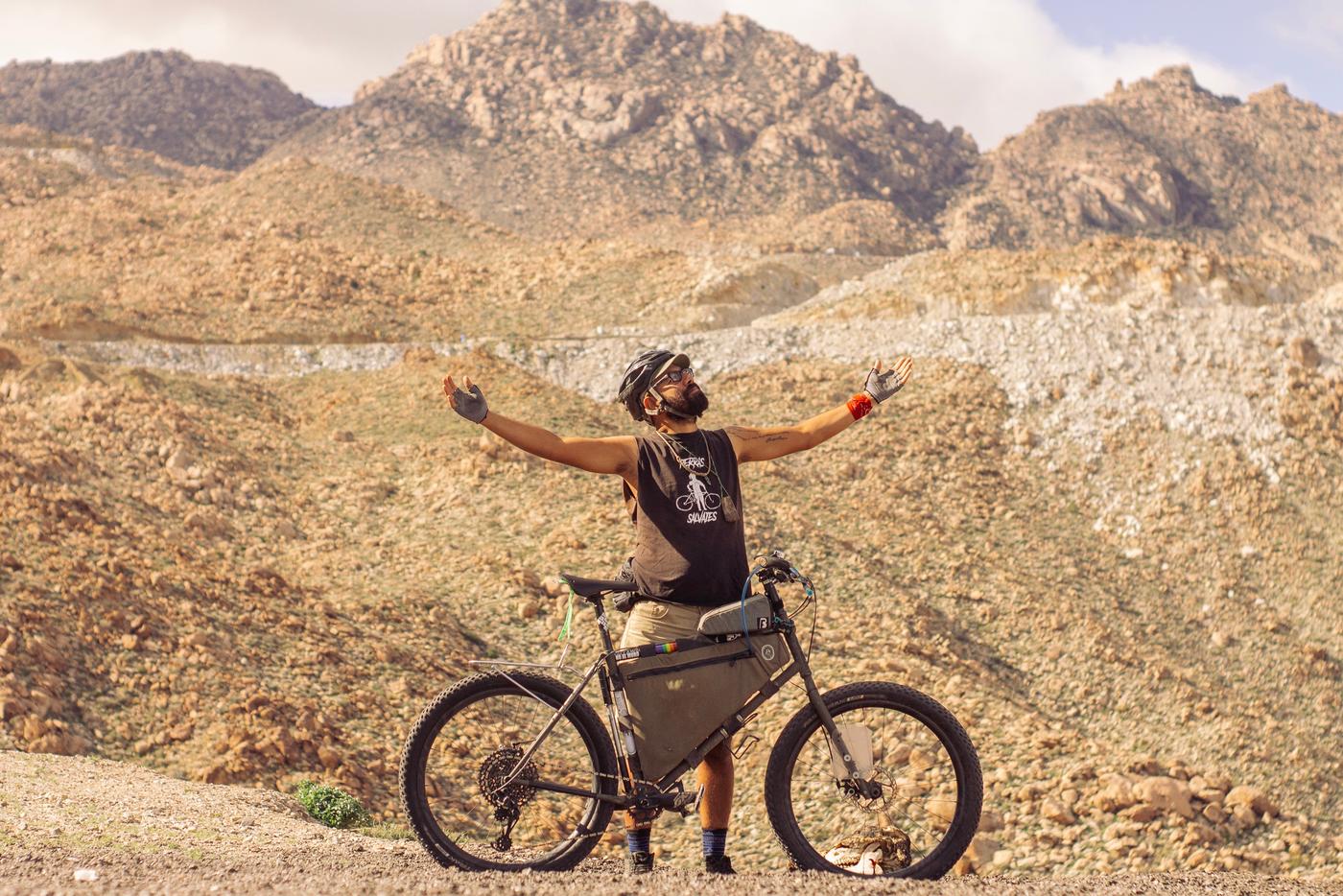 We do a different start from the official route: we take a bus to Mexicali and ride to La Rumorosa, a fun 1200 meter warm up climb. Once there we stay with our friend Sergio and visit El Vallecito Arqueological Site, a place with rock paintings made by the Kumiai Natives and who’s main character is El Diablito, a 20 cm human-shaped figure with curly horns hiding inside a cave. On December 21st, a ray of sunlight hits El Diablito’s face marking the winter solstice, a time for ceremony and migration. Sergio and a park ranger tell us about seeing a white light floating around the area that seems to arrive out of nowhere and disappear just as fast, apparently a part of life in La Rumorosa.

We ride south into the Sierra de Juárez, saying good bye to pavement and hello to pine trees and make it to Rancho El Topo where we stay in a beautiful barn repurposed for hosting visitors. Emeterio, the ranch keeper, tells us he’s a Mixe Native from Oaxaca and has spent some years working in the USA. “I was told I was going to be making twenty…what is it when it’s three zeroes?” “Twenty thousand?”, I answer. “Yes, twenty thousand –he says- I got very excited, that’s a lot of money, I thought. Years later I had nothing saved, life is expensive there and the rest went to my daughter in Oaxaca. Here at least I can send her money and still save a little bit because I have no expenses.” We leave El Topo to go to Parque Nacional Constitución de 1857 where we meet park rangers Alfredo and Héctor. As they are sharing their anecdotes they tell us they’ve seen the white lights too. They also have had groups of people come to do ceremonies where they claim to get in contact with the lights. Héctor says there was a wheel chaired rancher living in the area who showed up one day walking and with knowledge of several languages. He claimed to have been abducted, and what in Earth time was just five minutes, for him was five years living among “them”. He used his new acquired languages to organize tours in Baja California for years, but whatever they gave him, seems like the effect has passed as he is now back in the wheel chair and having memory problems. The stories then turn towards strange things happening in the cabin, including a ranger being thrown out of his bed in the same room we are going to sleep in; the next day we ride out of the park and into Ojos Negros, joining the official Baja Divide route.

The road to Ejido Uruapan is a very accurate approach to what the Northern Sierra section of the Baja Divide is: even on downhill days, there’s a lot of climbing. And pushing, both up and down. Karla and I both come from an urban cycling background and none of us has ever gone mountain biking, but I see her rapidly gaining confidence; that is, until her front wheel falls in a hole making her crash on her left side. I help her sit up and luckily she has only a small rash on her thigh and the helmet saved her from hitting her head. In Uruapan we stay at what used to be a hotel but is now a natural healing center, and when Karla mentions that her neck hurts a little because of the fall they offer to ease her pain with a plant but she kindly declines. The ride to Ejido Eréndira gives us a very dramatic first view of the Pacific Ocean and we ride under a light rain all day; Karla’s menstrual cramps decide to join the party. We continue slowly moving forward through the mud and once in Eréndira a kind local man on a bike arranges for us to stay in a room away from the rain. Later we go to a food truck owned by a smiley woman, María, who tells us she’s from Tala, Jalisco, but she’s been living here for a long time. Tala is a city located in an area infamously known by the abduction of people, this time not by UFO’s, but by the drug cartels. Young men disappear after they’re forcibly recruited sometimes under the disguise of a legit job, never to be seen again. María’s brother is missing since six years ago, and her brother-in-law since four. With her two children growing older, the chances of becoming a target were growing too, so they decided to come back to Eréndira.

Next day we go to Punta Colonet, Karla takes a bus to Vicente Guerrero and I continue en route to go up to Parque Nacional San Pedro Mártir, sitting at 2500 meters above sea level, home of the California Condor and the National Observatory, as it’s one of the three best places in the world for studying the night sky. After crossing a river about twenty times I make it to Rancho El Coyote and I spend a night there, then the next morning I ride to the paved road that takes up to the park, and the climb begins right away. It takes me 6 hours to cover the 35 km to the entrance of the park, becoming the hardest climb I’ve ever done. The rangers give me a spot in their cabin and I join them for dinner. “So you’re the one coming from Constitución, right? Did you stay at the haunted cabin?”, says one of them, then they proceed to tell me more stories about unexplainable things happening at that place. The next day I hike to see the highest point in the Baja California Peninsula, the Picacho del Diablo at 3100 meters high, and then visit the observatory from where you can see both the Sea of Cortes to the east and the Pacific Ocean to the west, although condors where nowhere around. The rangers talk about the implications their job has, and how they rescue visitors and fight forest fires without medical insurance of any kind. One of them doesn’t even have a contract and still gets paid as a volunteer; it’s been seven years since he started. He tells me he’d be making more money in any factory in the city, but he likes the Sierra too much. They all agree they are here because they love what they do, despite not having the conditions they could have somewhere else. The next day I take a last look at the sky, but there’s no condor to be seen. Even so, I’m happy with what I’ve seen and I jump on the BD route in Rancho Meling and ride to Vicente Guerrero, where I rejoin Karla. We need to get ready for the desert.