One of many yurt camps around the Son-Kul lake

So what happens when you make the decision to quit the first edition of one of the most anticipated endurance races on the planet? I’m laying outside a yurt at 3,000m above sea level, next to Son Kul Lake in Kyrgyzstan. I’m exhausted. The last few days of the Silk Road Mountain Race have tested me to the limit both physically and mentally.

It is the first time for my race partner Justin and myself to take part in an endurance race and if the truth be told, we never really came to race. It was evident from the first day out of Bishkek, as we meandered up Kegeti Pass along with our friend Jon. A few weeks earlier, I had divided the entire race route into manageable chunks that would put us at the finish in 13 days. But, as I’m lying by Son Kul lake at the first checkpoint, the reality dawned on what we are actually taking part in. We are already 24-hours behind our schedule within five days and can’t afford to loose any more time. Missed flights home are not an option for either Justin or myself, especially that I have a ten-year wedding anniversary only a few days after my return! 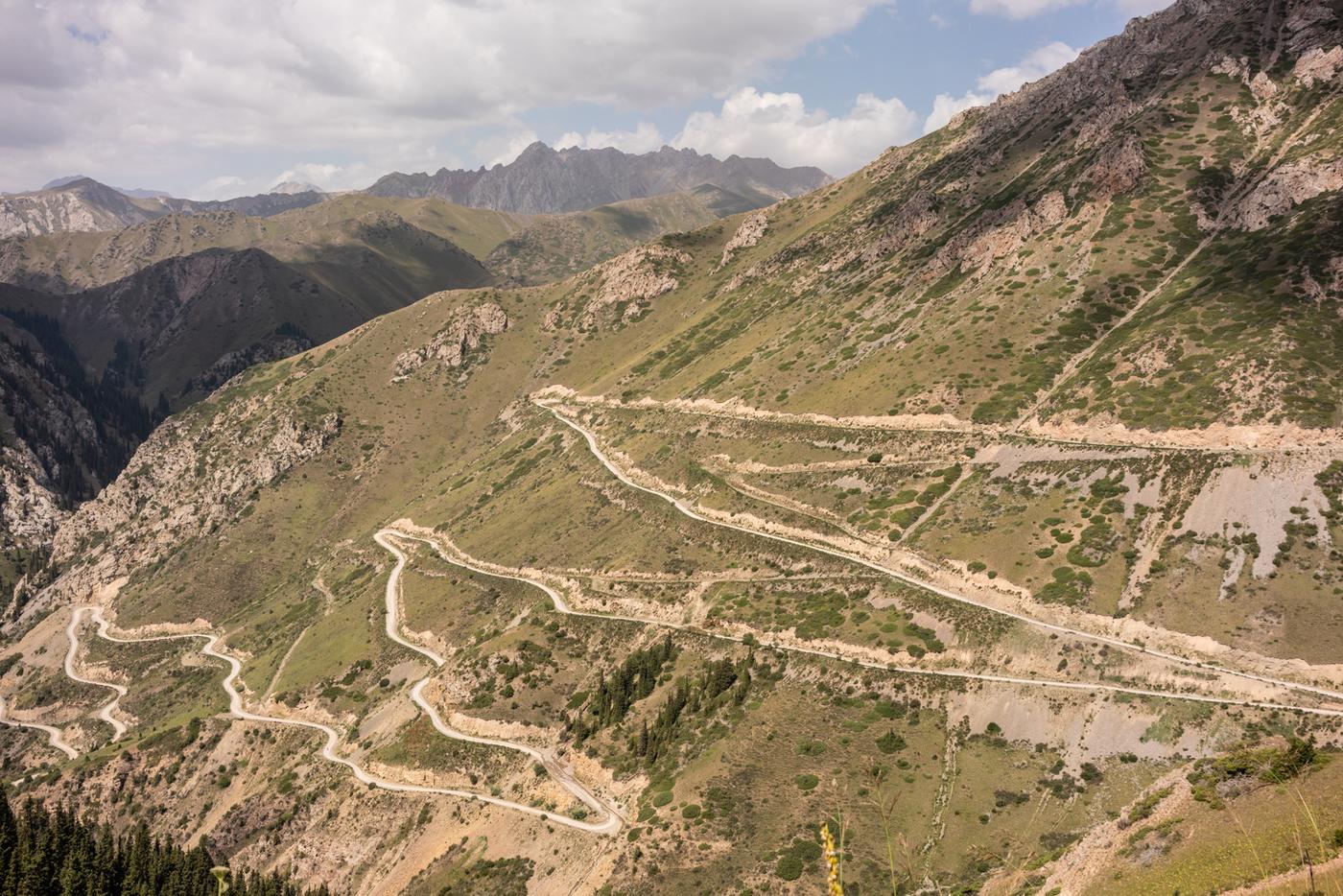 In the days leading up to checkpoint one, we had become acutely aware of how much work we needed to do to make it there before the deadline. Reaching the checkpoint had already become our own little race. If our experience to that point had been about enjoying a beautiful country and the generosity of the Kyrgyz people; from then on it would be about getting our heads down and keeping the pedals turning well into the dark of night. 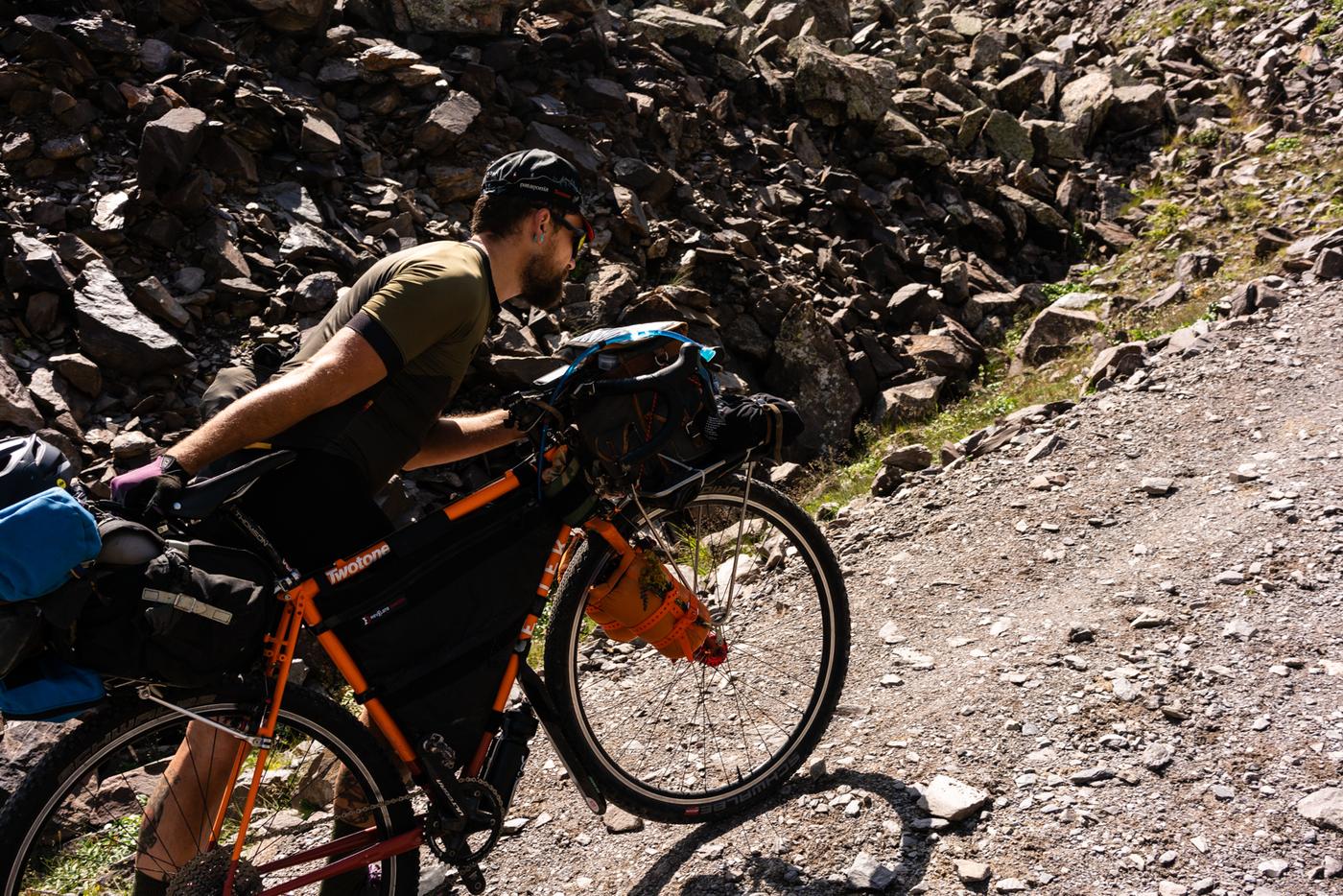 On the day of the checkpoint closure, we were up at 5am and on the road shortly after. Ahead of us was a 5-hour section of ‘hike-a-bike’ where the gradient was just too steep to ride up especially with loaded bikes. This gave me plenty of time to think, and so began the internal battle of whether to continue the race or not. With hindsight, we could have easily managed to make it around the course if we had ‘come-out-racing’ from day 1. But it seemed to us, that this required a commitment to ‘race’. There would be no time for chai stops with local families, riverside picnics and swimming, no time for relaxed camping with freshly brewed coffee every morning. 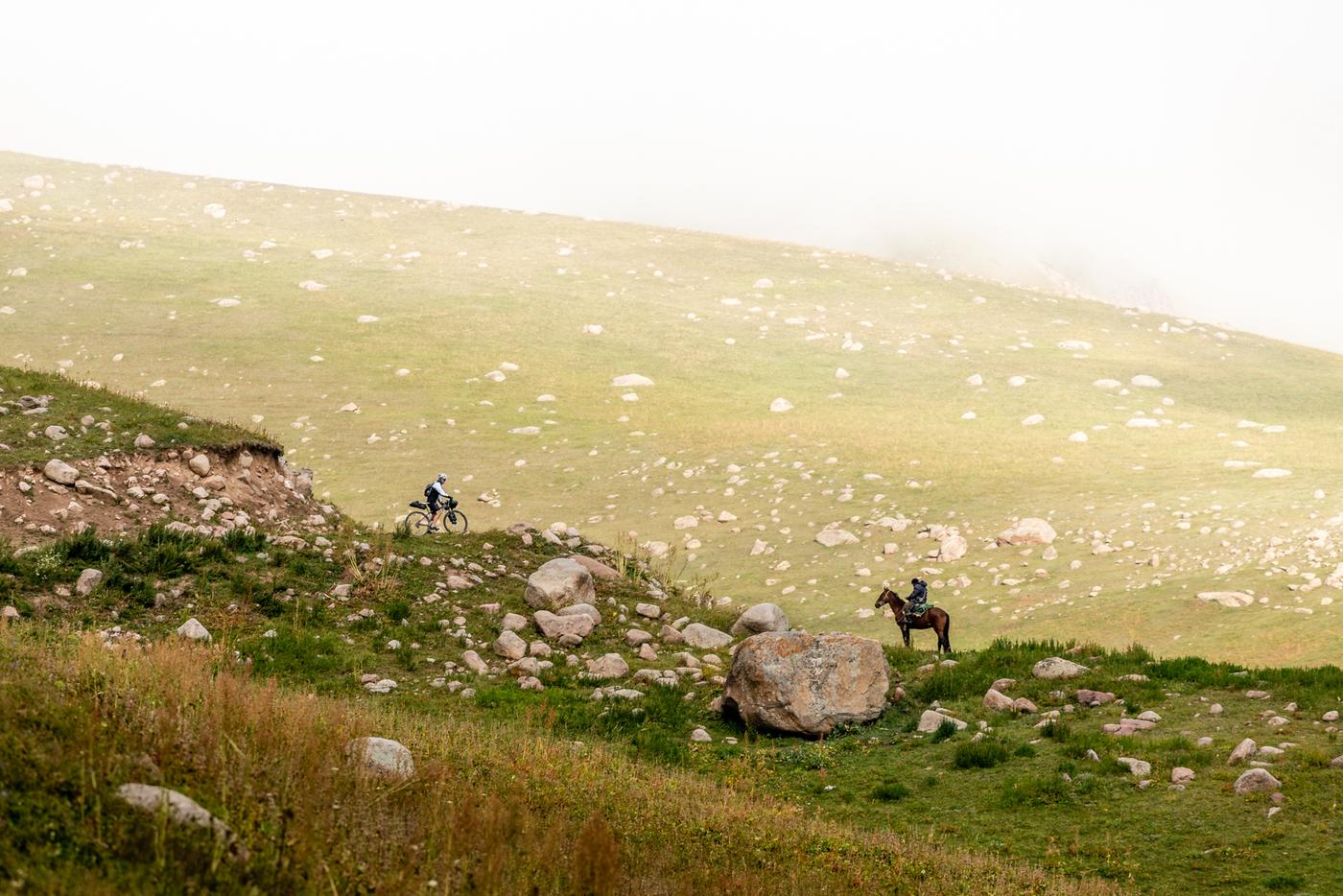 You are probably reading this and asking why we entered a race in the first place; I know, I asked myself that question many times during my 5-hour hike. We were under no illusions about finishing high up the list, we often joked that our main aim was ‘survival’. The reason to participate was connected more to the community of the event. You can go touring or bikepacking in these amazing places, but the race and people around something like SRMR add a whole new level of interest. Following who is where on the course, who had scratched, what the top five are doing was all part of the fun. 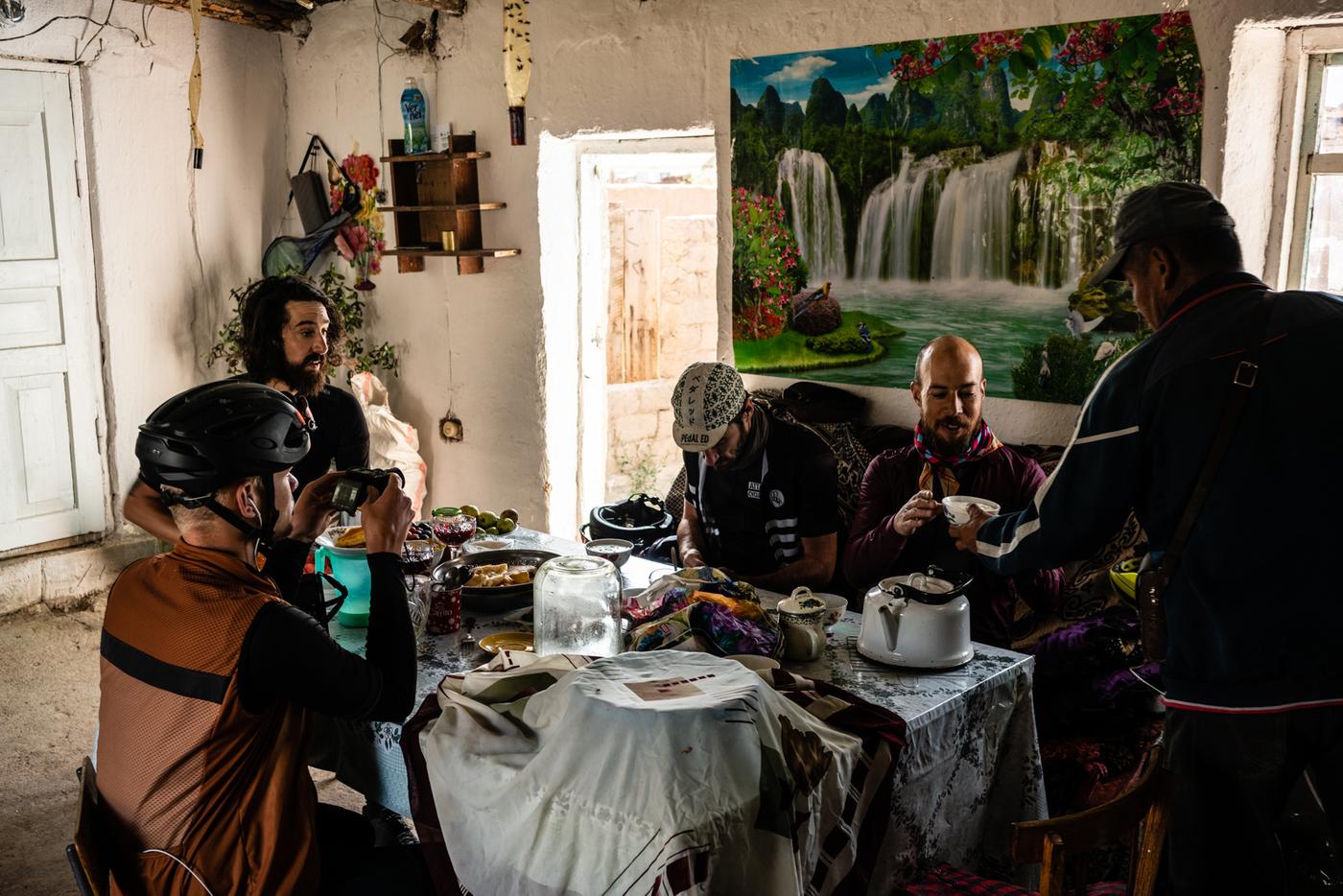 Part of this very community is now sitting in front of me at the yurt camp; drinking beer and eating the food prepared by our hosts. Each person sitting at the table is at a metaphorical crossroad, with a decision to make before the next morning; do they stay in the race and carry on to CP2 or do they join the list of scratchers and continue on their own adventure?

Justin and I have already resolved to leave the race and go back to enjoying Kyrgyzstan. We were to be joined by Carlos and Philipp; a photographer and filmmaker respectively, both from Hamburg. Philipp had spent the last 12-hours lying unconscious in the yurt and wasn’t in any condition to continue on. We had new friends and formed our own little groupetto. Now it was time to get on with what mattered… Exploring. 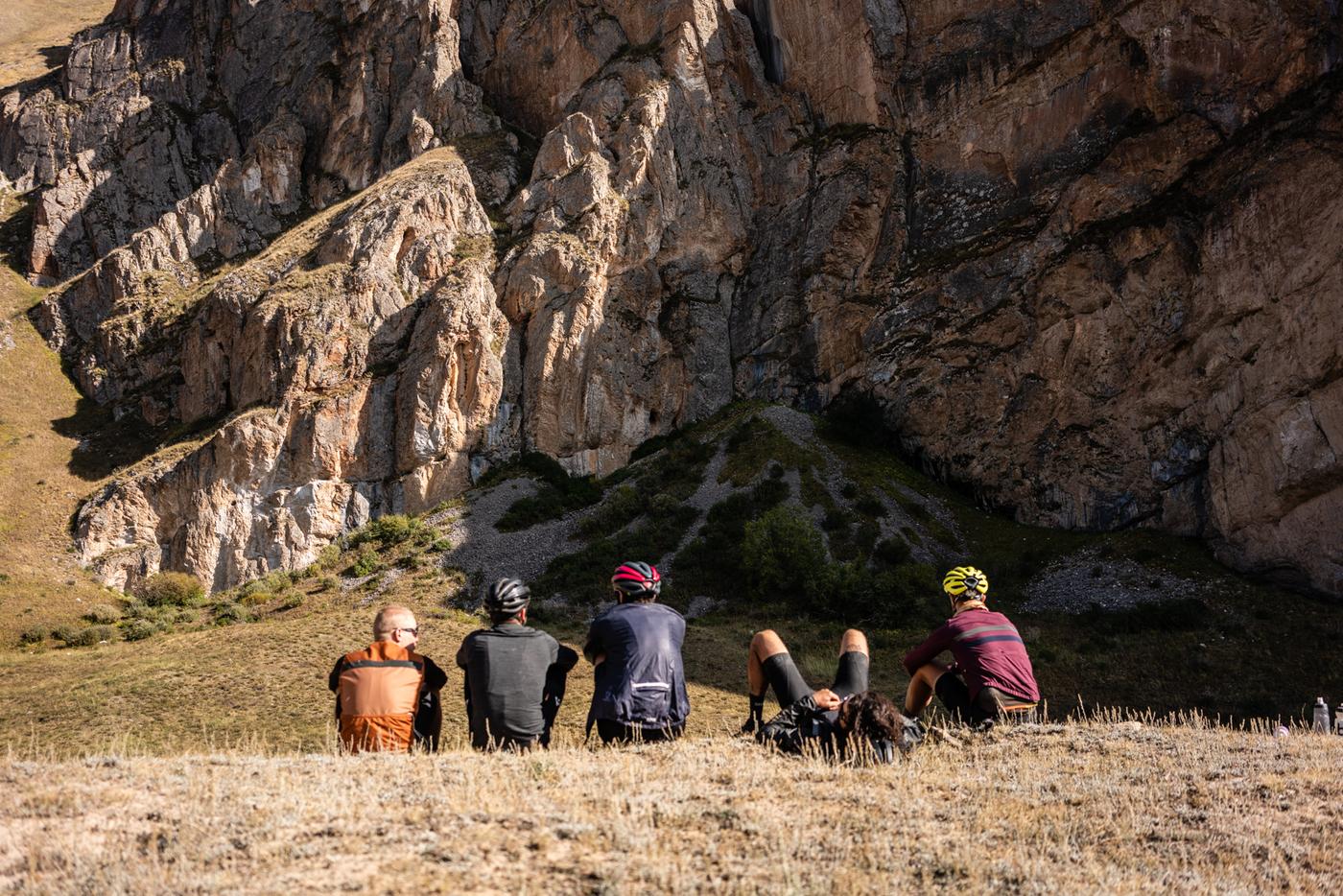 The next morning we set out from the yurt camp, leaving the race route on one of the most amazing gravel descents I have ridden. We headed east towards the city of Naryn where all four of us would be simultaneously struck down with stomach problems. Another pair, Chris and Rob (Rob of Quirk Cycles) had scratched from the race due to mechanical problems with Chris heading back to the UK. Rob decided to join our groupetto.

With our bodies repaired and our ranks swelled to five, we set out on the last major leg of our journey – Naryn to Kochkor. We went back into exploration mode and although we continued along the race route into the Kapka-Tash mountain range, we decided against heading further east and instead towards the Jalpak-Bel Pass. 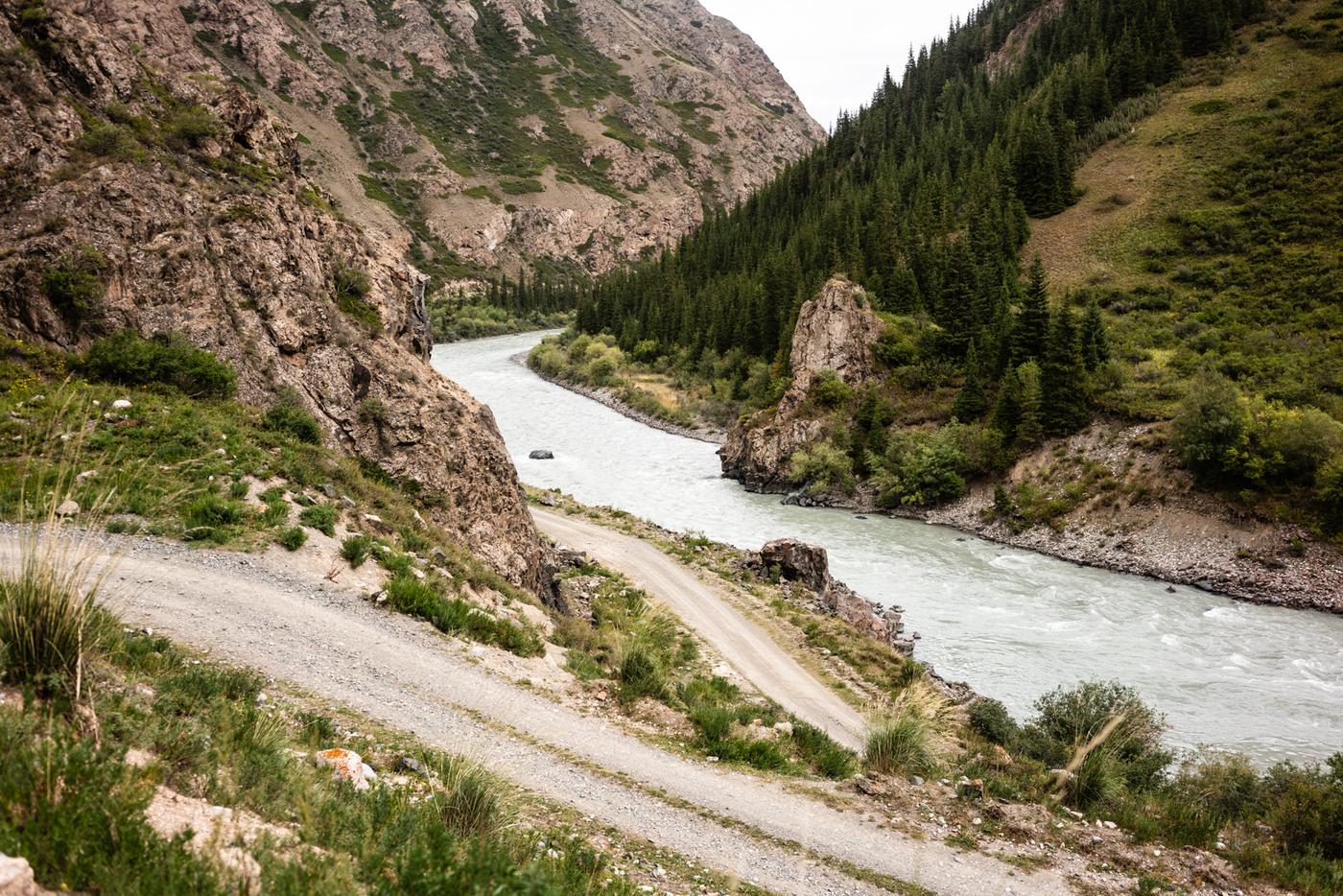 Our three-day journey took us through a picturesque canyon that followed the Small Naryn River. The pace was easy and the conversation was flowing among the new group of friends. Moments that might have been stressful in a race situation now became sources of amusement; like searching for breakfast supplies in a village…

The village of Eki-Naryn would be our last resupply point for two days and was in the process of being dug up for new utilities. In a country where most toilets are a hole in the ground, this sight was quite a surprise. Our map showed three shops and all of them required an expedition over trenches to reach. All were closed. We stood and scratched our heads outside the last of them, as the shop owner came out and invited us to his home for a breakfast of kumis and bread. I guess this is what people say about priceless moments, which become the memories to cherish. If we had still been racing, this would have been time we couldn’t afford to lose. 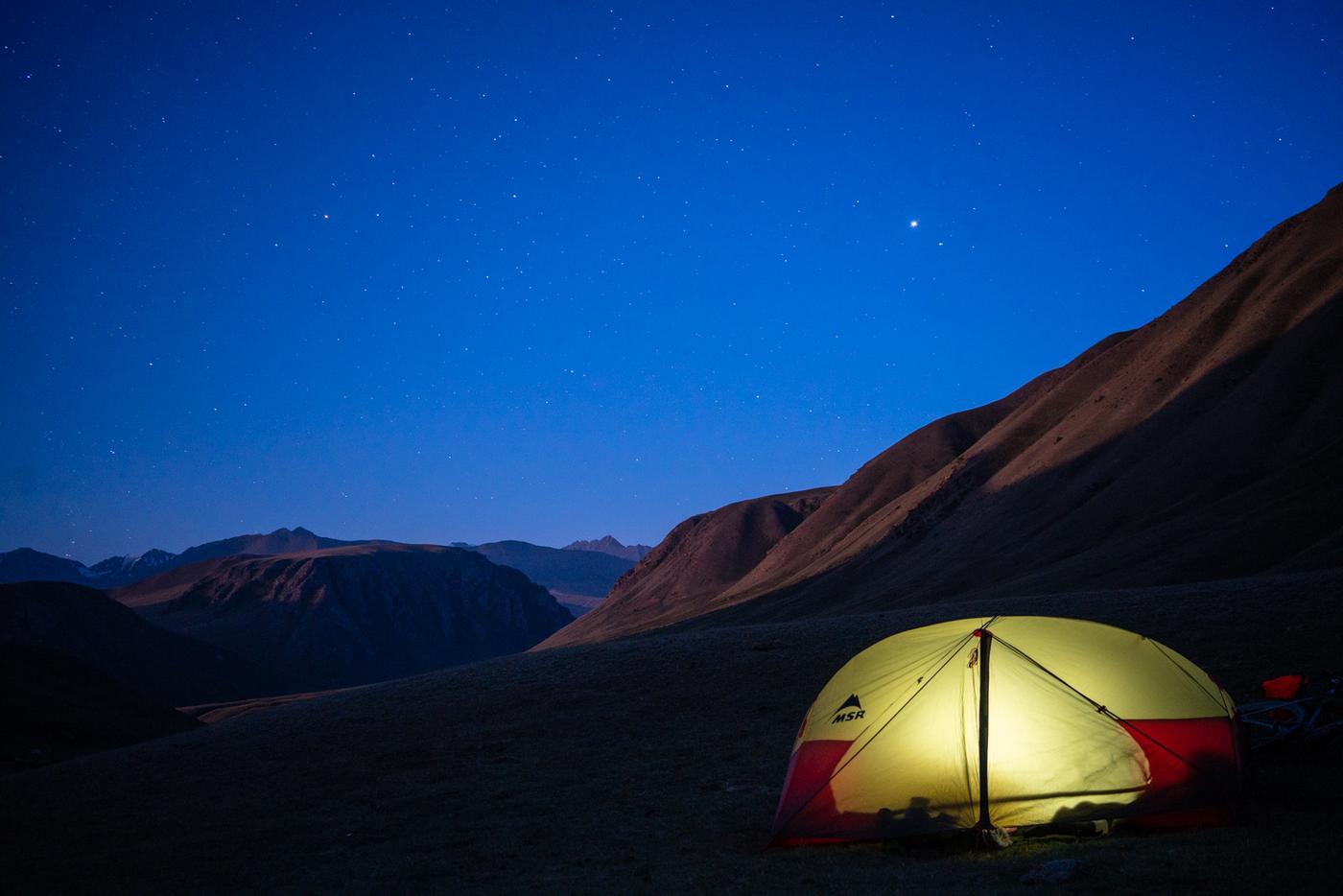 Our last night of camping would see us set up base just before the Jalpak-Bel pass. We found refuge from the freezing wind blowing up the valley in an area usually reserved for a flock of sheep (going by the mess on the ground). It also happened to be on the junction where the race route came down from Issyk-Kul Lake before heading on towards Kochkor.

As we set up our tents, a dazed and race-weary looking Pete (Cap 27) who had just battled the snows on the Tosor Pass noticed us and stopped for a chat. He had a somewhat confused expression while he ran his eyes over our merry group. Maybe it was surprising seeing us at this point of the race, maybe it was the fresh look and smile each of us had? As we explained our story to him, a look of understanding washed across his face. 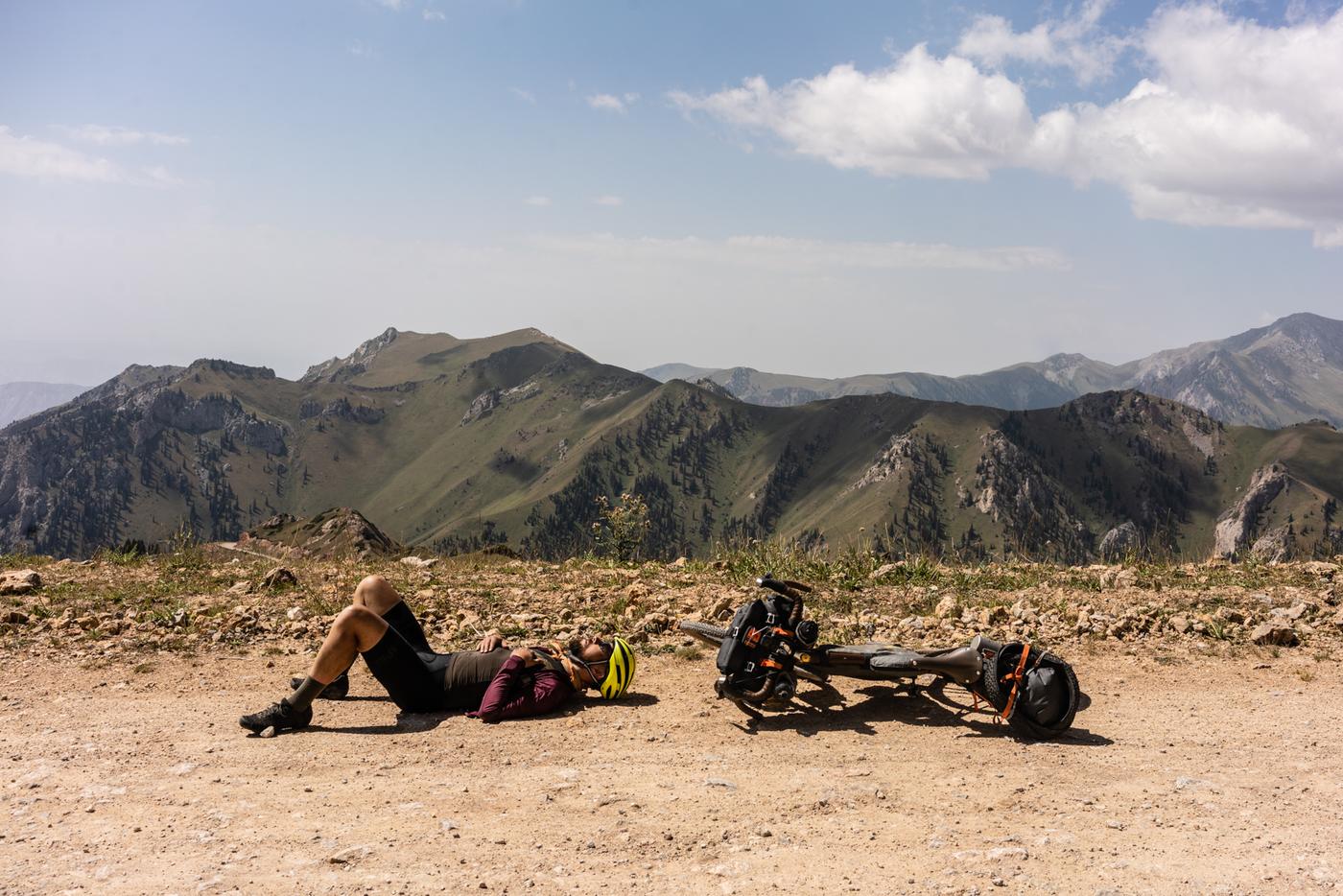 That is the moment I realized that I wasn’t cut out for this kind of racing. I will happily stick to exploring new countries; I will leave the racing to the racers.