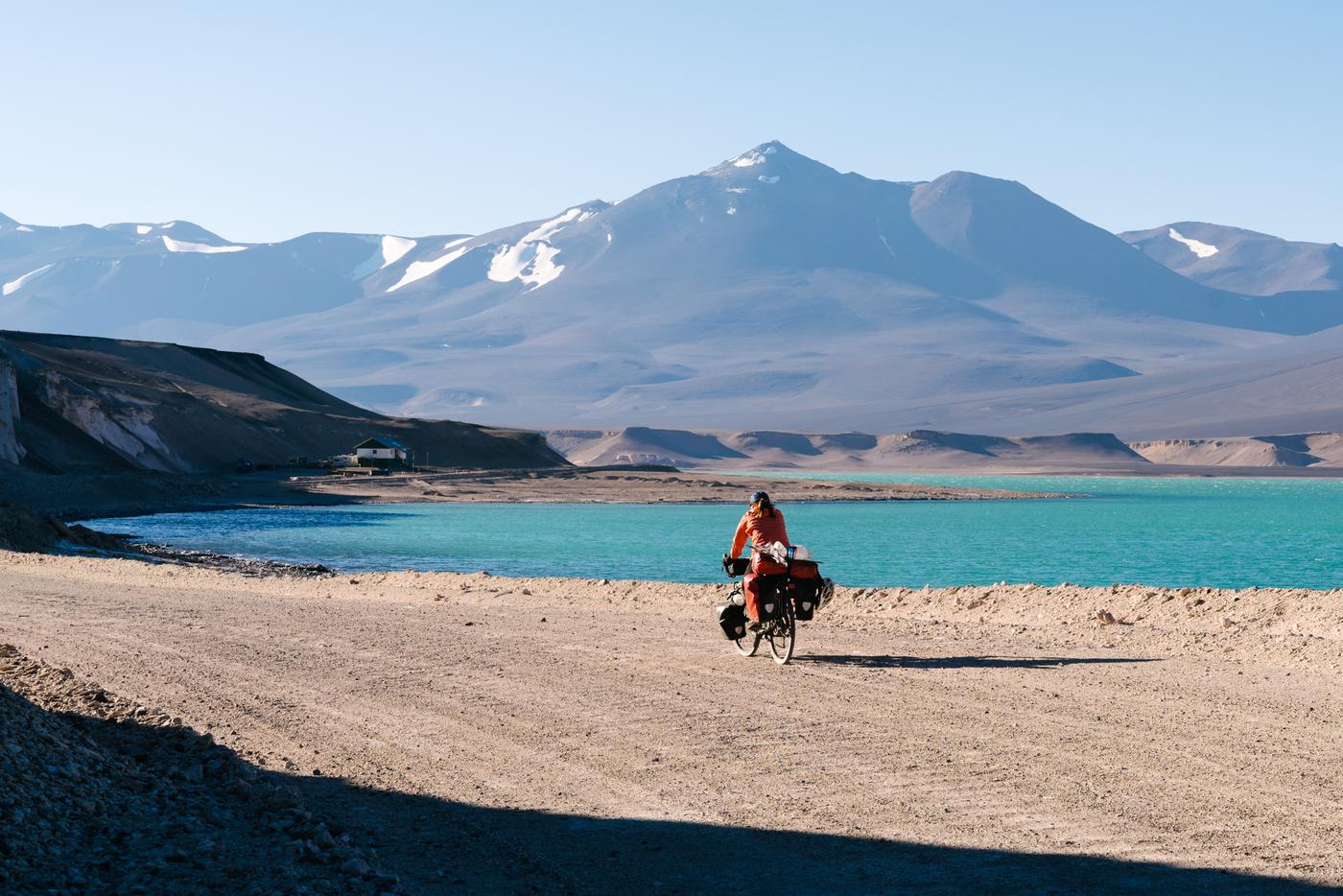 With some intel from my interweb friends Eileen and Andy, Chrissa and I set off from the quiet village of Antofagasta de la Sierra, toward a small 4×4 road that promised the solitude and other-worldly landscapes we were seeking, with no shortage of challenges along the way.

While we had our sights set on reaching the vast sea of wind-sculpted pumice known locally as Campo de Piedra Pómez on day one, the wind gods were not quite working in our favor, with the combination of a soft road surface and afternoon gale-forces making it a challenge just to stay upright.  Instead, we sought out the largest boulders we could find, to enjoy a game of ‘hide the tent from the walls of projectile sand’ (there were no winners). 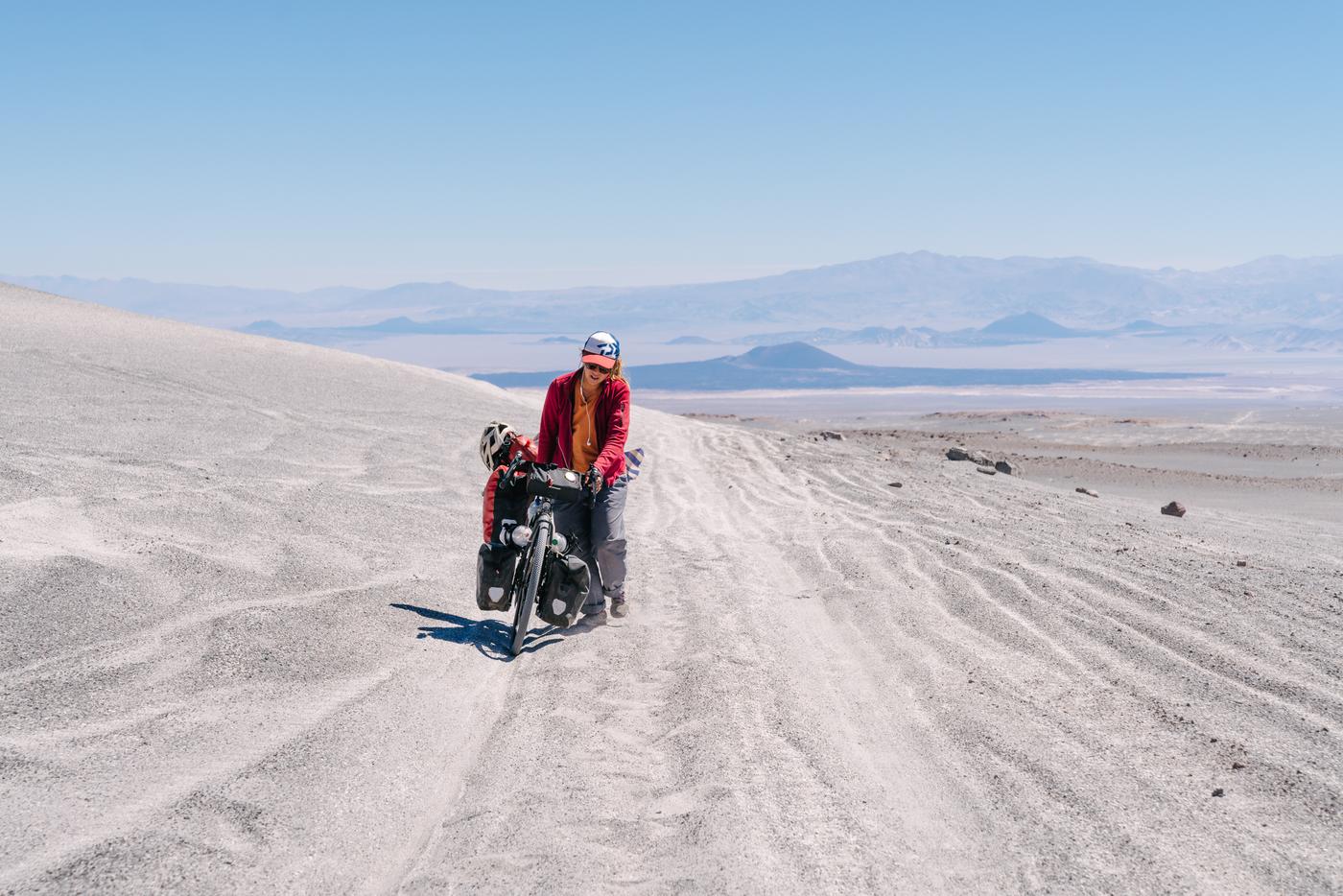 Eventually, we’d get our wish of camping amongst the swooping waves of towering pumice, before crawling our way over the primitive road leading toward the first major pass.  The going is tough here even with my three-inch tires, so you can imagine how tough it might be on Chrissa’s bike that is pushing the limits of its clearance at 38mm.   You know it’s gonna be a long day when you’re pushing on the downhill!  In this case, we both were.

With little warning, our surroundings suddenly shift from classic, desolate high Puna to grassy pampas and steep, rocky canyons lined with foliage.  After a month straight in some of the most barren landscape in the world, these splashes of green lining the road feel something like a lush tropical paradise.  Just the sound of a distant river in the canyon far below is enough to soothe the thoughts of our dwindling water supply. 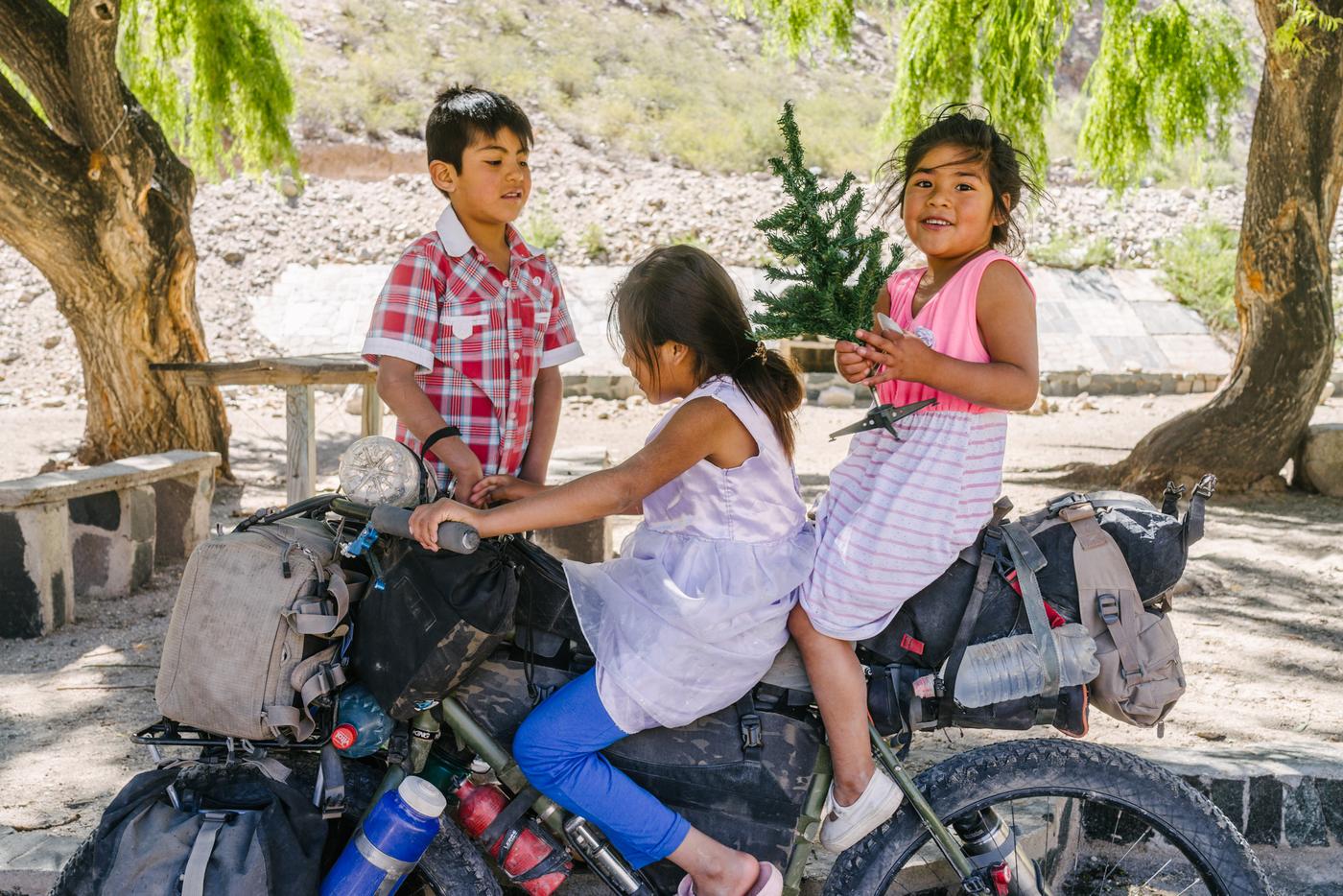 In the Andes, pretty much anywhere there is water there are people.  In this case, a village of around 100 inhabitants known as ‘Las Papas’.  With kids comprising around half of the population here, it’s not long after we arrive that their curiosity gets the best of them and our bikes are turned into glorified jungle gyms as they quiz us on what’s in each bag.  This was the first time that this part of South America ever really reminded me of a place like Perú, where these interactions occur almost daily.

The locals warned of the poor road condition on the only route out of town, claiming that it featured “hundreds” of river crossings.  They even offered to shuttle us through the canyon in a truck for free.  After so much time in the desert though, there was no way we could pass up the opportunity to get our feet wet, so we opted to ride on through and see for ourselves… In truth, river crossings are great fun until somewhere around the 40th one, then it kinda just becomes work.  Nevertheless, passing up the truck was definitely the way to go! 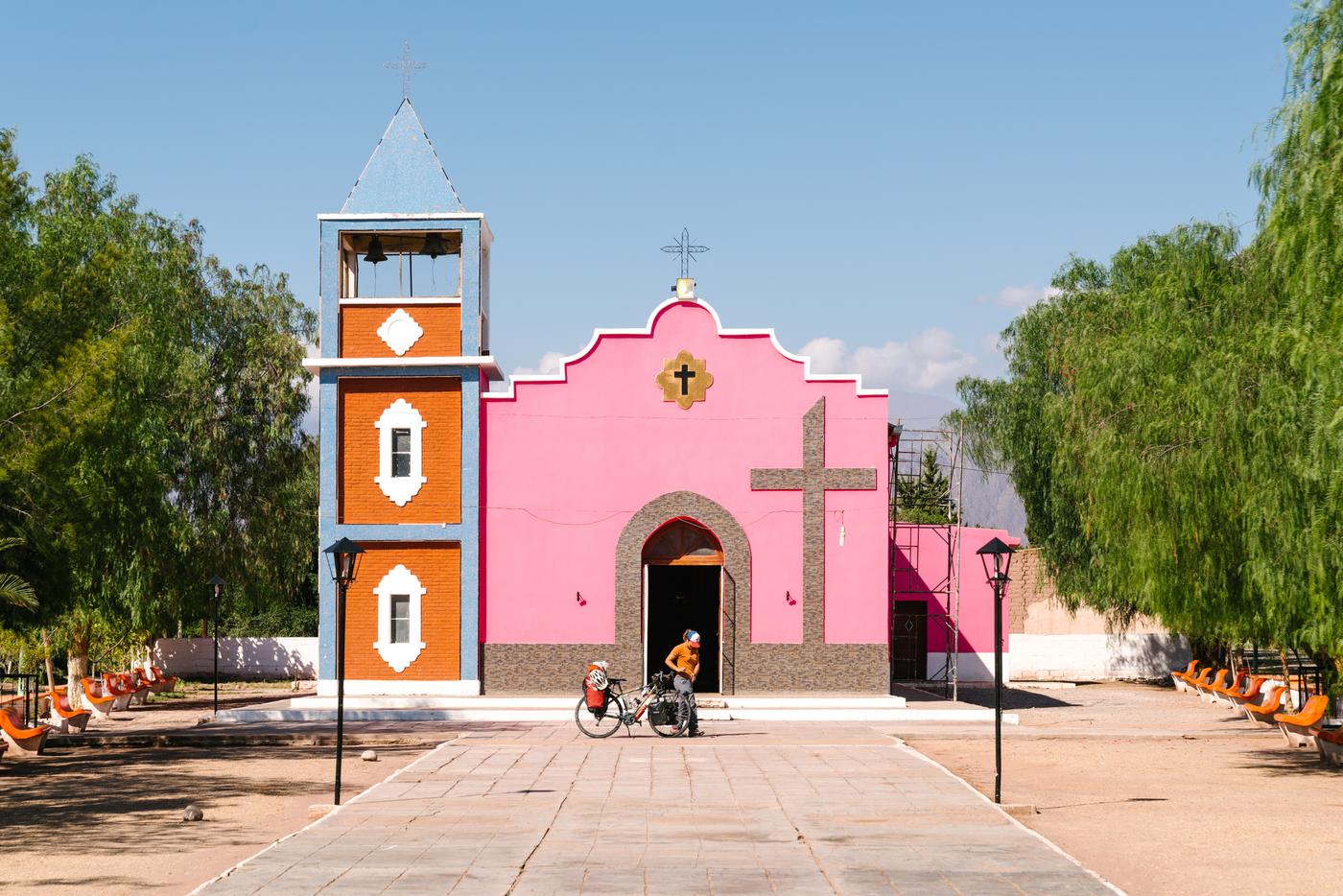 Eventually, we slipped out of the canyon and descended toward the lovely town of Fiambalá.  We liked the tranquilo vibe of this place so much that it was probably fate that we’d end up accidentally returning here on two more occasions over the next week.  The first time, after attempting to head south through a canyon that had just been destroyed by flash floods. Then once again after an ill-timed gust of wind (and a healthy dose of my own stupidity) resulted in a mangled drive train along with a few damaged spokes.  It wasn’t all bad though as this delayed us just enough to catch the spectacle that is the Dakar Rally passing through the area.  A good way to pass the time in between more trips to the local heladeria (aka ice cream parlor). 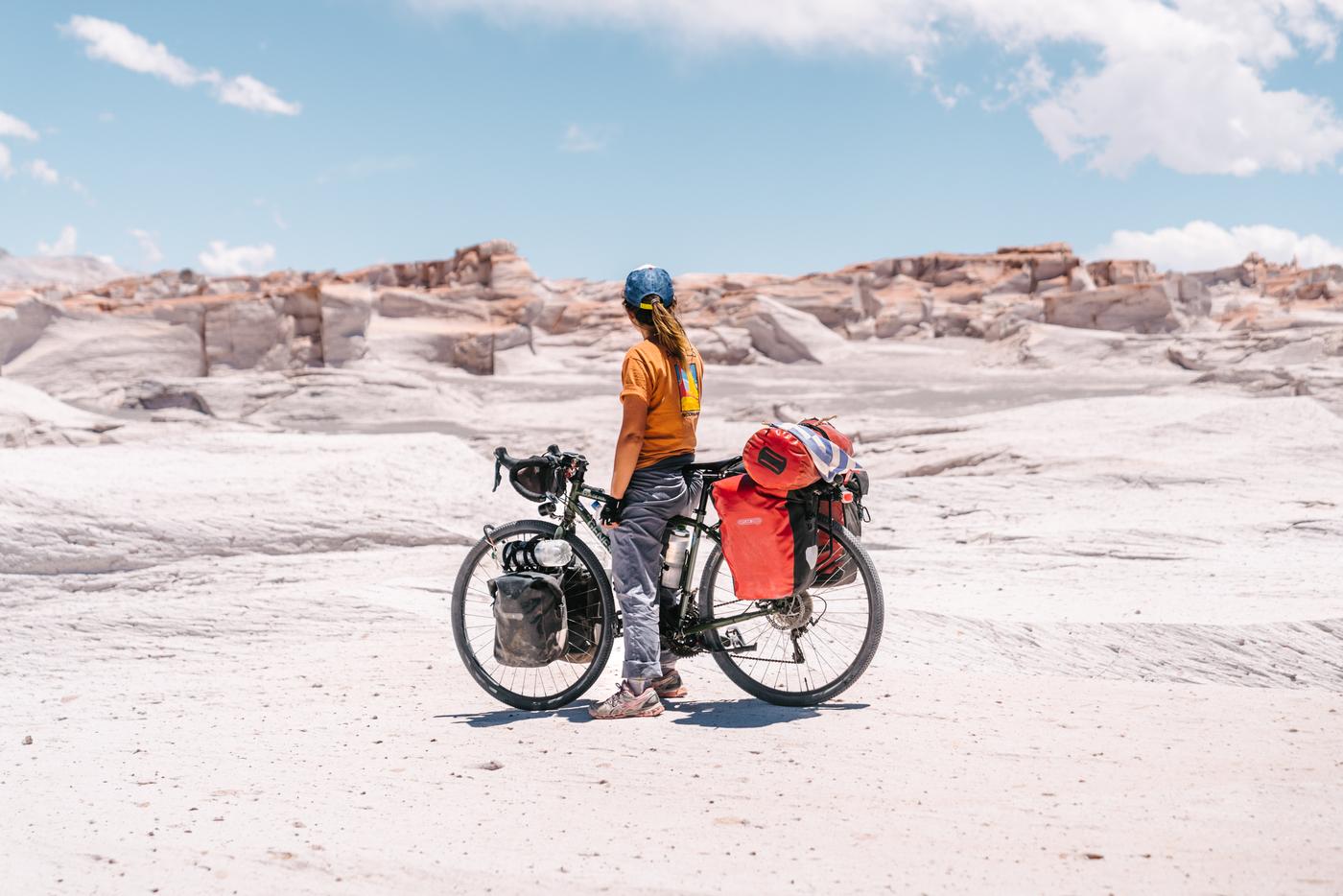 After piecing together the best fix that was possible in the bike-parts wasteland that is rural Argentina, we left (again) for the 200 kilometer ride up to Paso San Francisco with our sights set on traversing the 12-day route through no man’s land toward Paso Pircas Negras…  Alas, my drivetrain struggles persisted and after summiting the pass and crossing back over into Chile, I hitched down to the Chilean coast where I’d have a better shot at finding the parts that I needed.  Like I said in my last post, sometimes bike touring is all about luck.  One day the wind is at your back and the next it’s smashing your derailleur against hard objects.

My route is at Ride With GPS.