The Kanab Creek Bakery, while it lacks in wifi, has both strong coffee and absolutely delicious food. Don’t miss their burrito! After refueling our stomachs, we moved onward to the local library for wifi. We had an idea of where we wanted to go, but on this trip, we consciously made the effort to avoid larger highways, for lesser-traveled byways. Although, in many cases, you can’t help but take the paved road to your destination. Luckily, the 12 in Utah is one of the most scenic routes in the state, or at least we felt this way at the onset. We had a route and a rough agenda. While Kanab’s hospitality was welcoming, we had to hit the road. Highway 12 begins off the 89 in Southern Utah and it would be our vein on which we’d travel across the state, up to Canyonlands. The agenda was to poke our heads inside Bryce Canyon National Park, which Cari and I had never been to. Now, National Parks in this part of the country tend to be zoos. Zion is another example of a park that has seen an increase in attendance over the years, leaving the park scrambling trying to deal with this increased influx of Instagrammers and adventure seekers. All on a shrinking budget. While I love the idea and presence of National Parks, I can’t say they’re the first place I want to go, especially in Southern Utah. With that said, we headed into Bryce, not knowing what to expect. That’s a lie. I knew a little about Bryce. I knew of the hoodoos, the inclusion in what is called the Grand Staircase, the history of the geology, the elevation of the park, which exceeds 10,000′. I knew of the juxtaposition of lush, green vegetation, framed by red rock formations. I knew Bryce was photogenic and beautiful, but I didn’t know much more than that.

We had planned on doing an afternoon hike but completely blanked on Max. Dogs aren’t allowed on many National Park hiking trails, and it was actually too warm to leave him in the truck for an afternoon, so instead, we drove the main road and did all the pull-outs, taking in the longest vistas in the US… By the time we refueled, picked up more firewood, and hit the road, it was getting late. That’s the thing about road trips; driving eats up so much time! We began discussing camping possibilities while being aware that it was, after all, still a shoulder season and shoulder seasons at elevation, when bad weather is on the radar, can mean trouble. Case in point; Hell’s Backbone was an option for camping, but at over 9,000′, it was a crapshoot. Roads that high are usually very exposed, making camping in a rooftop tent, during a storm, an ordeal and driving down a mountain on a dirt road in the pouring rain is not fun. This trip was about fun, so we moved past Escalante towards Capitol Reef.

That’s where I saw a turnoff, on the side of the highway. The sun was already setting and I was tired, so we took a gamble and hooked off the winding asphalt onto the even windier dirt. Gambles pay off more often than not, on dirt roads. We careened around corners and kept pushing down the increasingly narrow road, in search of a campsite. The road deteriorated, we saw fewer and fewer cars camped out along its many secluded pull-outs. Turns out, this road ended at a giant slab, with very little wind and a great view; it was perfect. We promptly set up camp.

Then something odd happened. Max was on-guard all night. Acting very weird. Barking. On edge. It was not normal behavior for our otherwise very, very, chill dog. Max is our protector, a pack leader who knows what’s best, and at this moment, he was freaked out. If I walked away from camp to pee, he’d follow, groaning. Any rustling in the brush, he’d bark. It was wild! This part of Utah is big cat territory. My theory was Max sensed a mountain lion in the vicinity and was nervous for our group’s safety. Needless to say, we were all ok ending our evening at 9 pm, a good 7′ off the ground. 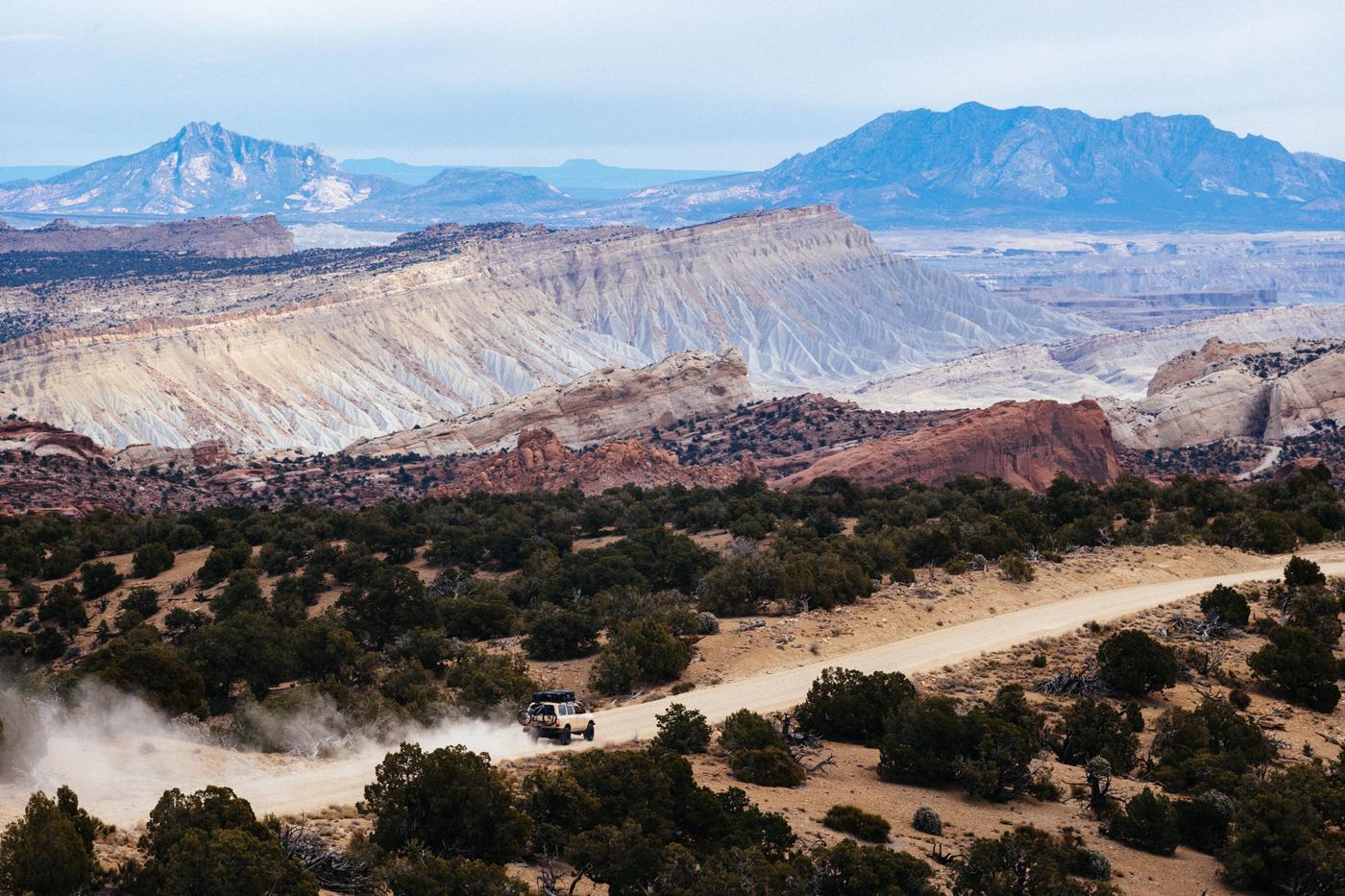 Remember what I said about squiggly lines? Well, they pay off. Our morning roll out was fast on that day because I really wanted to refuel in the town of Boulder before taking the Burr Trail down to Capitol Reef and witness the legendary Waterpocket Fold.

What is the Waterpocket Fold? Well, the National Parks, while many can be zoos, have exceptional websites, explaining these geological phenomena:

“The Waterpocket Fold defines Capitol Reef National Park. A nearly 100-mile long warp in the Earth’s crust, the Waterpocket Fold is a classic monocline, a “step-up” in the rock layers. It formed between 50 and 70 million years ago when a major mountain building event in western North America, the Laramide Orogeny, reactivated an ancient buried fault in this region. Movement along the fault caused the west side to shift upwards relative to the east side. The overlying sedimentary layers were draped above the fault and formed a monocline. The rock layers on the west side of the fold have been lifted more than 7,000 feet (2,134 m) higher than the layers on the east. 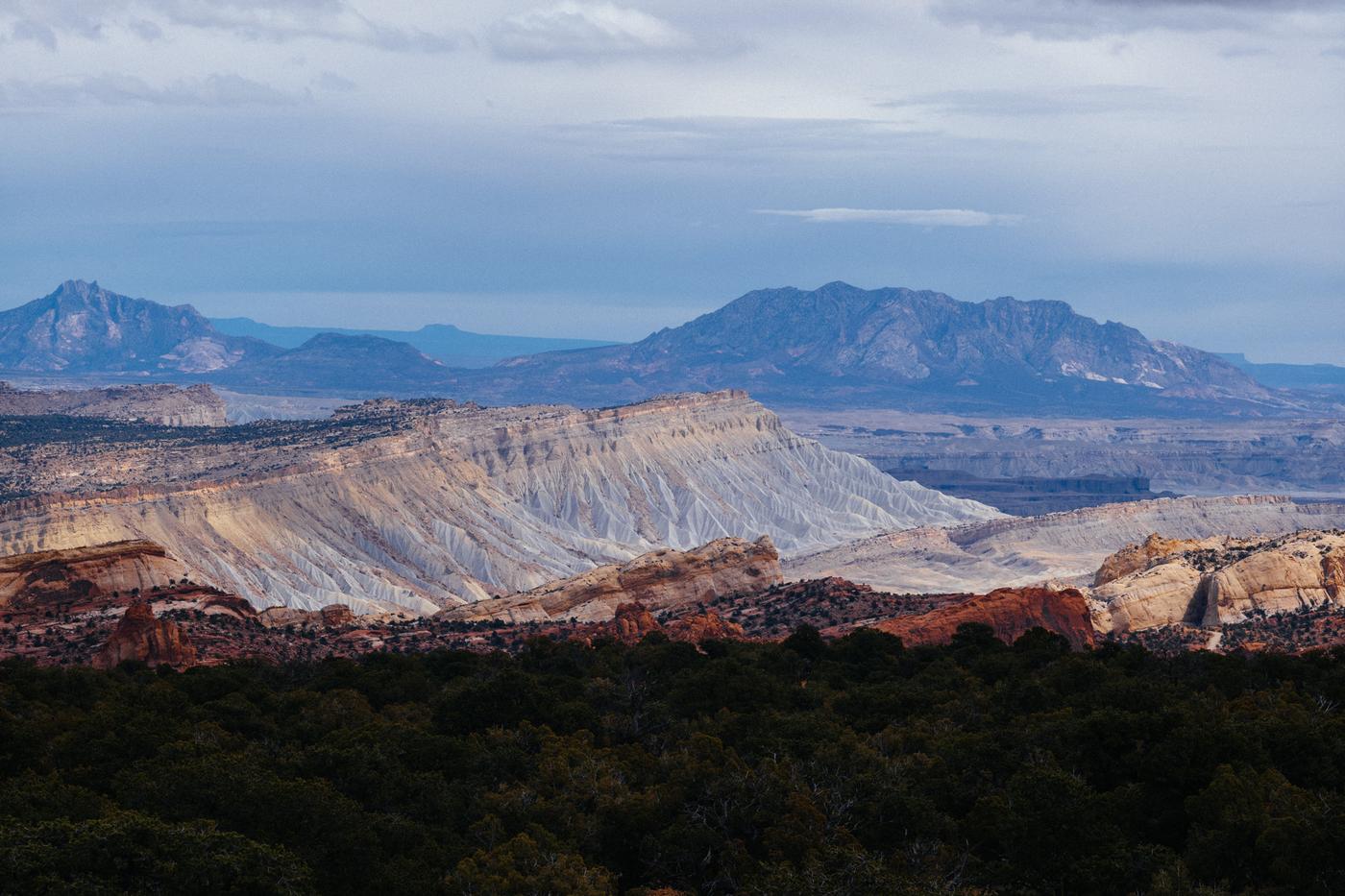 More recent uplift of the entire Colorado Plateau and the resulting erosion has exposed this fold at the surface within the last 15 to 20 million years. The name “Waterpocket Fold” reflects this ongoing erosion of the rock layers. “Waterpockets” are small depressions that form in many of the sandstone layers as they are eroded by water, and are common throughout the fold at Capitol Reef. Erosion of the tilted rock layers continues today forming colorful cliffs, massive domes, soaring spires, stark monoliths, twisting canyons, and graceful arches.” Driving through this zone was slow-rollin’. We could not believe our eyes. I’ve heard Burr Trail is an exceptional road, but no photo will ever do it justice and then you get to the switchbacks, just after entering the park. Mind. Blown. Seriously, what a treat. My cogs were already spinning for a bike ride of epic proportions… Canyonlands and the Great Gallery

It was around the town, err outpost, of Hanksville that we realized during our wonder and amazement of the ‘Reef, we hadn’t thought about – you guessed it – where to camp. Scouring maps and guidebooks, we weren’t sold on anything in the immediate vicinity. Then a friend dropped a pin on us, locating an ideal enclave, near the start of our next day’s agenda. I doubt you’re reading this, but if you are, thank you!

Here’s where the apparent theme of the remaining trip would make itself apparent and honestly, writing about this has caused me a bit of anxiety. Pictographs and petroglyphs are wondrous to behold in person, but always make me sad. Sad that the people who respected the land, lived symbiotically within its biome, hunted fauna, ate flora and were, in general, very content with their choices in life, were eradicated by white men and treated like animals. It’s something I hadn’t really come to grips with until seeing the Great Gallery. People ogle the Grand Canyon, and while it’s a great experience, the Great Gallery sparked something within me. First, scientists aren’t entirely sure of all the “W’s” – the who, what, where, when and why. They can deduce their approximate age, of around 2,000 years old. They think these were painted upon scaffolding, to protect these intricate drawings and carvings from the weather, other humans, and animals. They can’t deduce one thing though; what they depict and why they were made. Some speculate these beautiful designs were shamanic, derived from ancient visions seen while under the control of psychotropic drugs. Hell, that sounds like a good time if you ask me! Then you see the other etchings, added by modern man and it’s easy to get maddened by the scrawl, but I worked really hard to focus on the beauty and began asking myself all these “W’s…”

As Cari and I walked back, a breeding pair of Peregrine Falcons swooped around us, their calls echoing through the canyon walls. It caused me to tear up and I think the both of us felt an overwhelming sense of spirituality in that place. We are so very lucky to have experienced that morning’s hike to the Great Gallery and once again, we looked at each other and shrugged. We could go home now, completely sated from these past few days and the experiences we’d had together.