Hold up! Before the internet police turn on their sirens, technically, this post is about riding bikes in the town of Joshua Tree, not the National Park. We don’t condone breaking National Park rules and regulations. With that said…

We’ve already stated the obvious here on the site multiple times: the desert is best explored in the cooler months and in Los Angeles, with the Mojave just over our mountains, we hear its call all too frequently, especially when guests come to town. This past week we’ve been playing host to Jeff Frane from Bike Jerks and All-City Cycles. Jeff wanted to be here in LA for the new Mr. Pink launch and more importantly, he wanted to go to a National Park with us to explore, camp and partake in the rituals that go along with desert camping. 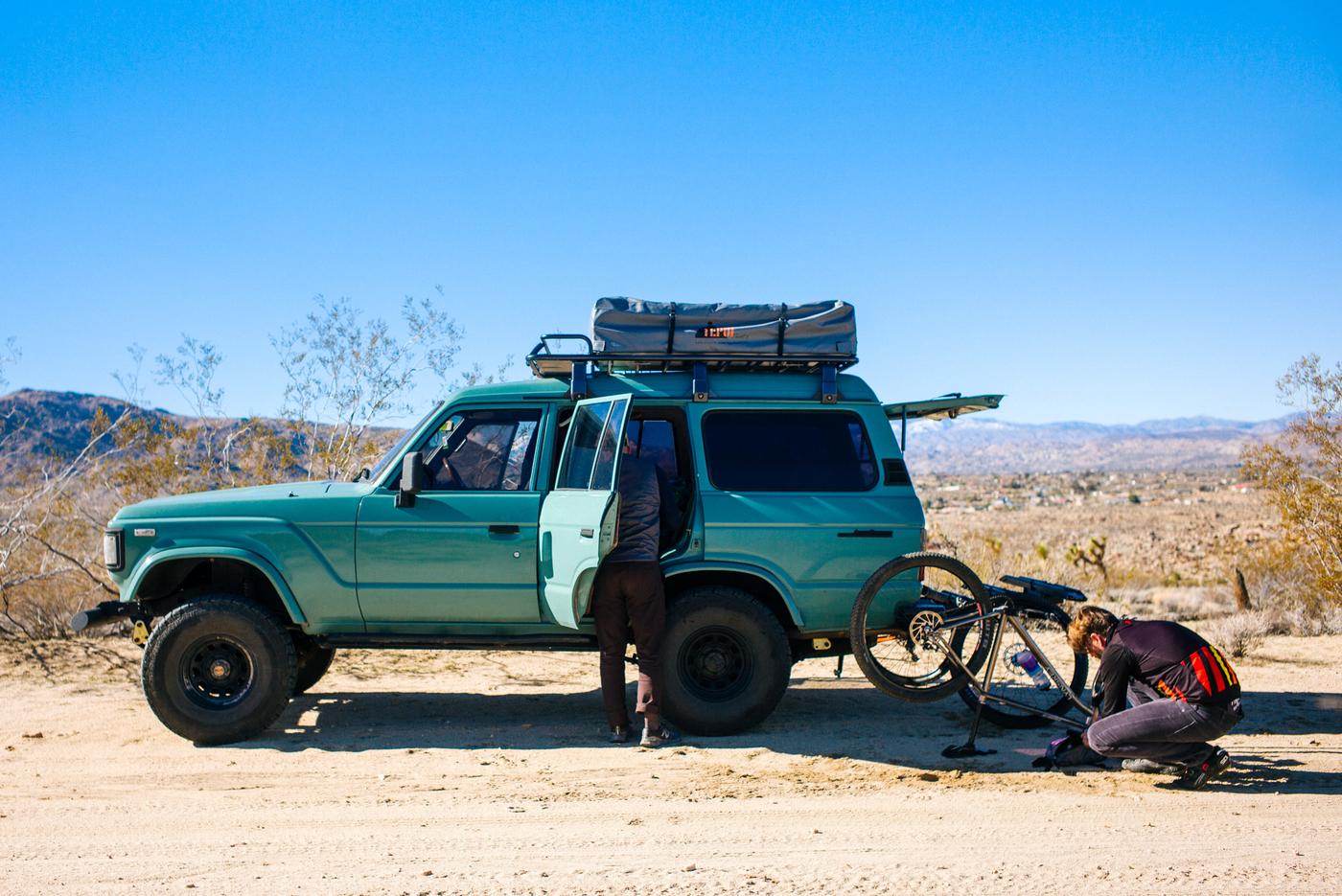 The only debate we had was which bikes to bring. While road bikes would leave us stuck to the main park road, cyclocross bikes would allow us to explore the dirt roads in the park, but clearly, mountain bikes would open the door to the most desert exploration. The only problem is, you can’t ride off-road in a National Park, so we began researching trails in the surrounding areas. This inquiry led me to the Joshua Tree Bicycle Shop and their Section 6 trail network. Nestled in the Desert View Conservation Area, this square mile of land has loads of fire roads and singletrack crammed into its rocky and sandy terrain.

We left LA, found one of the last spots in the park to camp and awoke the next morning, ready to ride when suddenly, Kyle rolled up to our site saying he found his friend Darren in the park, and he was thinking of doing the same. Darren had unbeknownst to him, camped on the opposite side of a large rock, just a hundred feet away from us the night before. He even had a mountain bike with him. We had a solid plan! Yet, not knowing exactly where we were heading was a little bit of an issue. Armed with a low-res JPG that I pulled from the J Tree Bike Shop’s website and a general familiarity with the area, we loaded up the ‘Cruiser and headed towards the general direction of Section 6. We ran into a local, who advised us to use the MTB Project‘s app to find the trails. It became a huge help and otherwise, we would have been wandering around the desert looking for the various trails as they crisscrossed the fire roads.

What we found was more than what I expected. We parked at the end of the “Luge,” a sandy piece of singletrack with banked corners and began climbing up and over the first hill. From there, it was game on. For over two hours we ripped around Section 6, snaking our way through rock formations and sandy banks before realizing we had left our partners back at camp and the sun was quickly setting over the horizon. 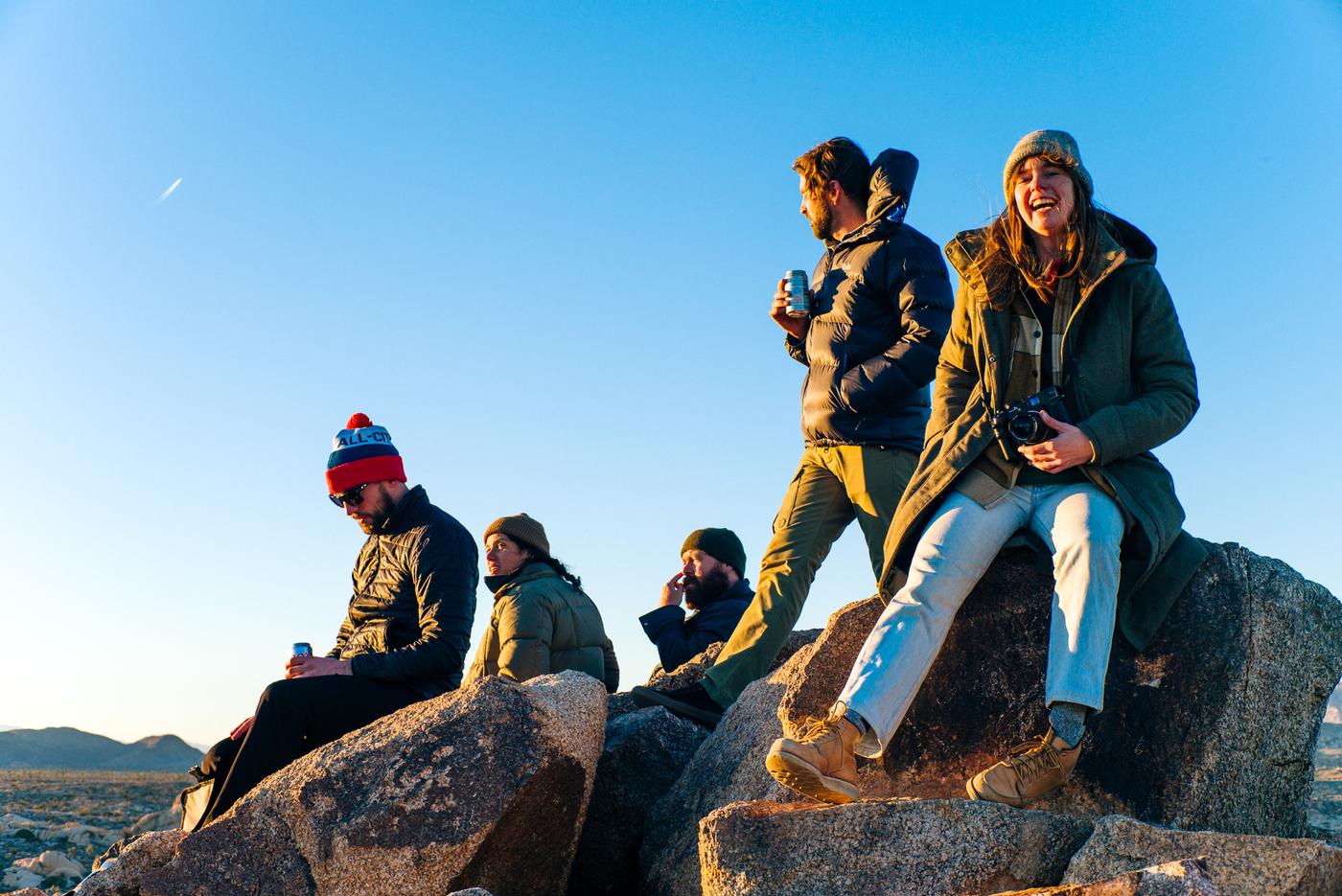 Making it back to camp just in time to consume some magic and watch the sunset, we all felt that our plan to escape Los Angeles on a three-day weekend had been a huge success. Having barely scratched the surface of Section 6, we’re already planning on returning later this spring for a second go.

If you’re ever in Joshua Tree with a mountain bike, swing by the Joshua Tree Bicycle Shop for a map of Section 6, or download the MTB Project app and have a go!