As you might imagine, my life can sometimes reach a tipping point when it comes to cycling. When I’m not on the road for events, I’m at my home, which happens to be above a bike shop. This means most of my spare time, when it exists, is spent fully immersed in bicycles. Come the end of the year, I’m usually ready for a break. Unfortunately, the last bit of wick has yet to burn. September brings about Interbike and suddenly, the cycling industry awakens. Suddenly my days are filled with phone calls, planning advertising and talking about press launches. While the rest of the world slows down towards the holiday season, my life intensifies. This year, I had plans to attend Eurobike, but then my girlfriend mentioned that her friends had won the lottery to hike the Subway in Zion National Park, Utah. For many outdoorsy people, the Subway is a once in a lifetime opportunity. Sure, you can always enter the lottery over and over again, but very few actually get to embark on this memorable hike. For instance, Cari’s friend had entered the lottery for four years before getting a permit. Hiking to me is easy. I often joke that it’s a walk. “Oh a 10 mile hike? So we’re walking for 10 miles?” As someone who is pretty fit and used to tackling really difficult bike rides or pushwacking their mountain bike loaded with bags, the notion of putting on some comfortable shoes and walking with a backpack seems too easy. With hikes like the Subway, I always want to bring a camera, multiple lenses and a tripod. Suddenly, that pack is a lot heavier and the day will be filled with capturing decisive moments as well as the gorgeous landscape.

Before we get ahead of ourselves here, Cari and I hadn’t gone on a proper vacation together since our pushwacking experience in Peppermint Falls. Prior to that, Telescope Peak and Death Valley. Somehow our summer had gotten away from us. I was busy, she was busy and here we are, in September with very little stories under our belts. 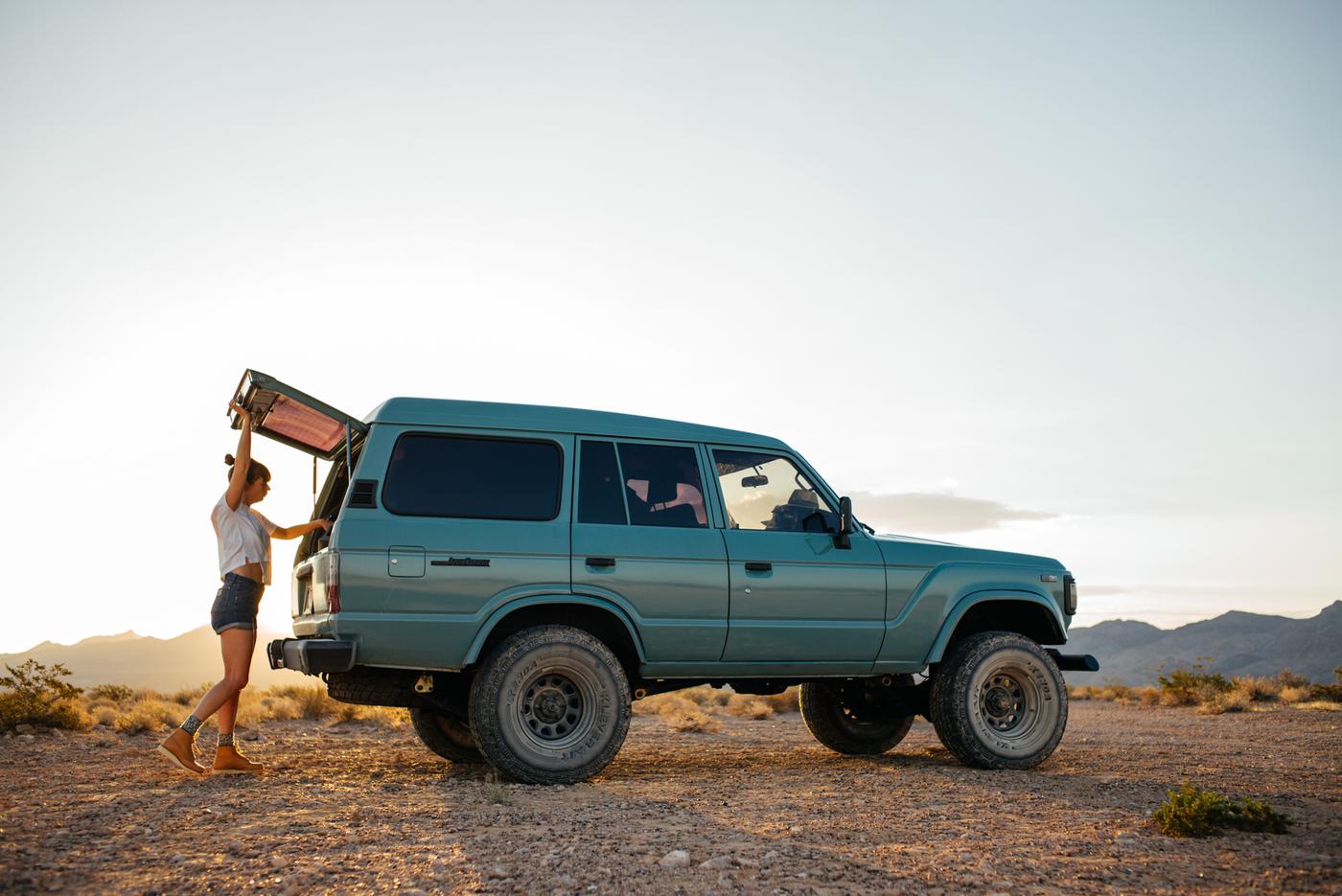 All of this coincides with a summer-long search for a new truck. Since returning from Japan, I really wanted to track down a turbo diesel Landcruiser. Carrying capacity suddenly became a concern after packing three people and their bikes into a standard cab Tacoma for years and I wanted a better vehicle for our dog Max when we eventually take off for Death Valley yet again. Oh and the fuel mileage on those things is impressive for such a big truck (25mpg on the highway loaded down.) The afternoon I was supposed to pick up Cari to leave for Utah, I finally hooked the big, elusive fish. An HJ61, freshly imported from Japan with a new, US VIN and all the accouterment I’d require.

We packed it up with our bikes (which we never touched the whole trip), camping gear, hiking gear, camera equipment and drove towards Utah. It was 9pm by the time we got on the road, putting us in the Mojave around 2am. We pulled off the 15 and began climbing a fire road to a mesa that was home to Michael Heizer’s land sculpture, Double Negative. There we pulled out a tarp, our sleeping pads, bags and fell asleep under the desert sky, only to awaken three hours later to an eagle’s screech and movement all around us. Desert wake up calls are the best. We were about four hours from Zion, where the rest of our group had snagged a campsite at 4:30am and the Virgin river awaited us. Nothing feels better than laying in this river after driving for hours on end. Heaven is sandy feet and scorched skin. 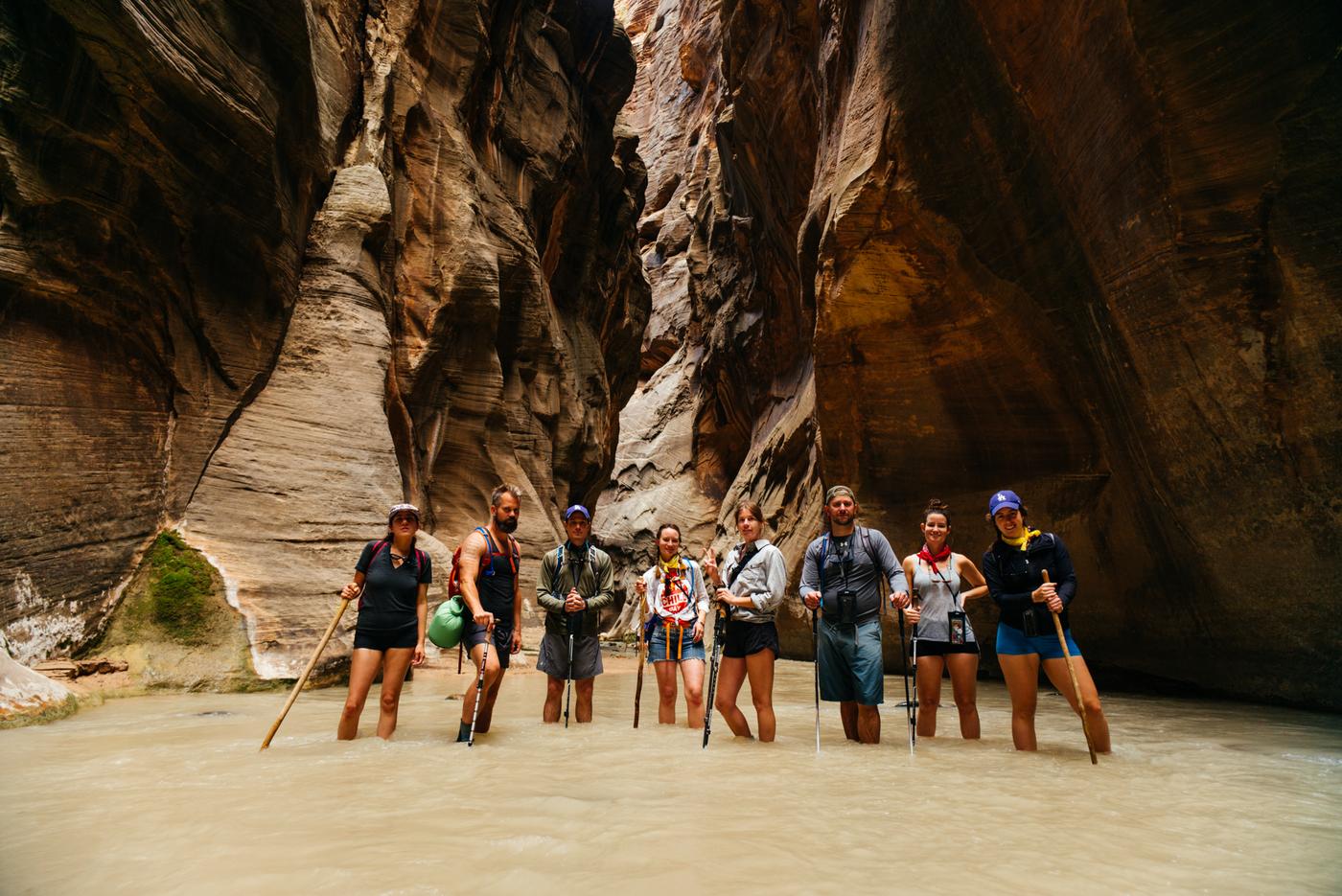 The next two days would be filled with sunset hiking and battling Labor Day weekend crowds at the popular park attractions. The Narrows would be a shakedown hike for our gear. I had concerns about the Subway’s many submersion points and my camera gear, others had footwear concerns. Needless to say, the night prior we were all making last minute gear swaps. Because you’re going to ask this anyway, I’ll go ahead and say it: yes, carrying your good camera is worth it. Just ensure it’s in a water-tight bag as soon as you hit the first rappel. I carried my Leica M240, 35mm f2 Summicron and 21mm f3.5 SUPER-ELMAR lenses. They all fit in a 1150nF Pelican Case, which then went into a Sea to Summit dry bag. For a tripod, I found the Sirui T-005KX 52″ Aluminum tripod to the lightest, easiest to open and most stable on the market. People say you should use a polarizing filter and while that might be the case for JPG or film use, I shoot my M240 with RAW and left my exposures pretty flat, trying to avoid true white and true black in the photo, making it possible to balance the histogram in post.

For my pack, I chose the Hyperlite Mountain Gear 2400 Windrider 40L for its size. Being a bigger fella, I like bigger backpacks. Especially for carrying camera gear. The rest of the rappelling gear was all Black Diamond and I hiked in some Nike Chukka FSB boots. They drain quick, have ankle support and were plenty grippy.

Apparel was easy: Mission Workshop Stahl shorts for their stretch. Ibex merino boxers, and a Mission Workshop merino henley. I stashed my puffy jacket in case I’d get cold, which I did. Everyone was freezing at one point. Sure, the Utah desert is 90º but in a slot canyon, with multiple swimming spots, you’re going to get cold, fast.

The hike, er walk itself was beautiful. One of the best experiences I’ve ever had off-the-bike. Navigation was easy with a combination of my Suunto Traverse watch and an app on my phone called Galileo. We’d complete the 15 mile hike with a whopping 5,000′ ascension and after ten hours on the trail, we were all ready for to engorge ourselves with tacos. The following morning, Cari and I took off with no real plans. It was Labor Day and everything within 300 miles of the park was going to be crowded. We had a few spots up our sleeves however and found some solitude down a 10 mile fire road before hopping back in the truck and driving to the opposite side of the park where we’d camp in BLM land for the next few nights. Day hikes, night hikes and campfire meals would leave us sated yet we knew that each trip we’d take further from Los Angeles only meant our drive home would be longer. With a heavy heart, full SD cards and a sage-colored truck that reeked of creosote and sagebrush, we headed west with the setting sun. There’s an old saying that if you love something enough, let it go and if it comes back to you, it’s meant to be. Well, I’d put a spin on it and say, if you love something enough, leave it, because it’ll always be there for you when you return. Cycling is like that. Coming back with fresh legs, a clutter-free mind and a desire to ride was all I needed.

Utah is magical and I can’t wait to return… with mountain bikes next time!