Before I begin to tell you about my trip along the White Rim Trail, I’d like talk about the rising popularity of bike packing and other two-wheeled exploration. With the current events surrounding “The Death of The Oregon Outback” I feel the responsibility to say a little something about wilderness etiquette. It might seem like common sense, but we have an ever-growing responsibility to this earth and the wild places we’d like to keep wild. Be it car camping, back packing, or bike packing – please always clean up after yourself and even the visitors who came before you. Do not leave campsites as you found them, leave them cleaner! I’d also suggest taking the same approach on rides as well. Take care of your own trash, but go a step farther and pick up everything you see. And always stay on designated roads and trails. Fragile ecosystems don’t need you making things any harder.

When Golden Saddle Cyclery first opened one of our customers told me about a 100 mile bike ride in the Island In The Sky portion of Canyonlands National Park. I had just been in the park a week before, but without a bike so I was especially interested in hearing about the ride. As a big fan of the area, and the desert in general, I returned for a handful of visits before finally bringing along a bike this past March. And let me tell you, it wasn’t until riding the White Rim Trail that I felt like I had really experienced this magnificent place.

Riding the White Rim takes planning. No matter how you do it – in a day, two days or a week – there are some things you just have to figure out in advance. Permits and reservations are needed for any over night trips. Access to the Green River is extremely limited and isn’t the easiest to filter water from so you pretty much have to carry all the water you’ll need. While it’s not the most technical ride, it is 98% dirt and at some points very steep and rocky. 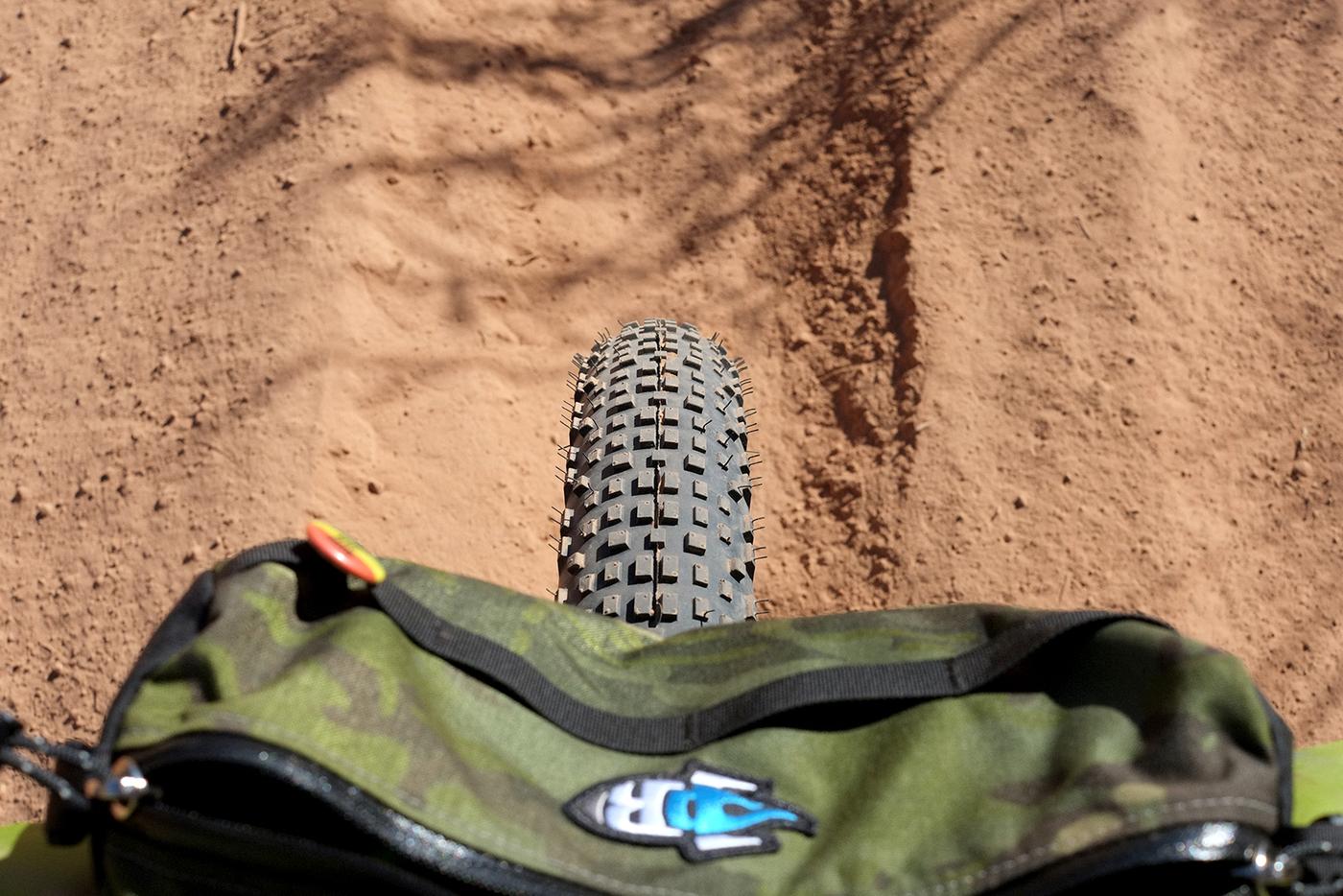 If you want to do it on a cross bike I suggest doing it in one, unloaded sitting. However, for anyone doing the trek on a fatter tire, I’d highly suggest loading up and taking your sweet time. You will not regret it. 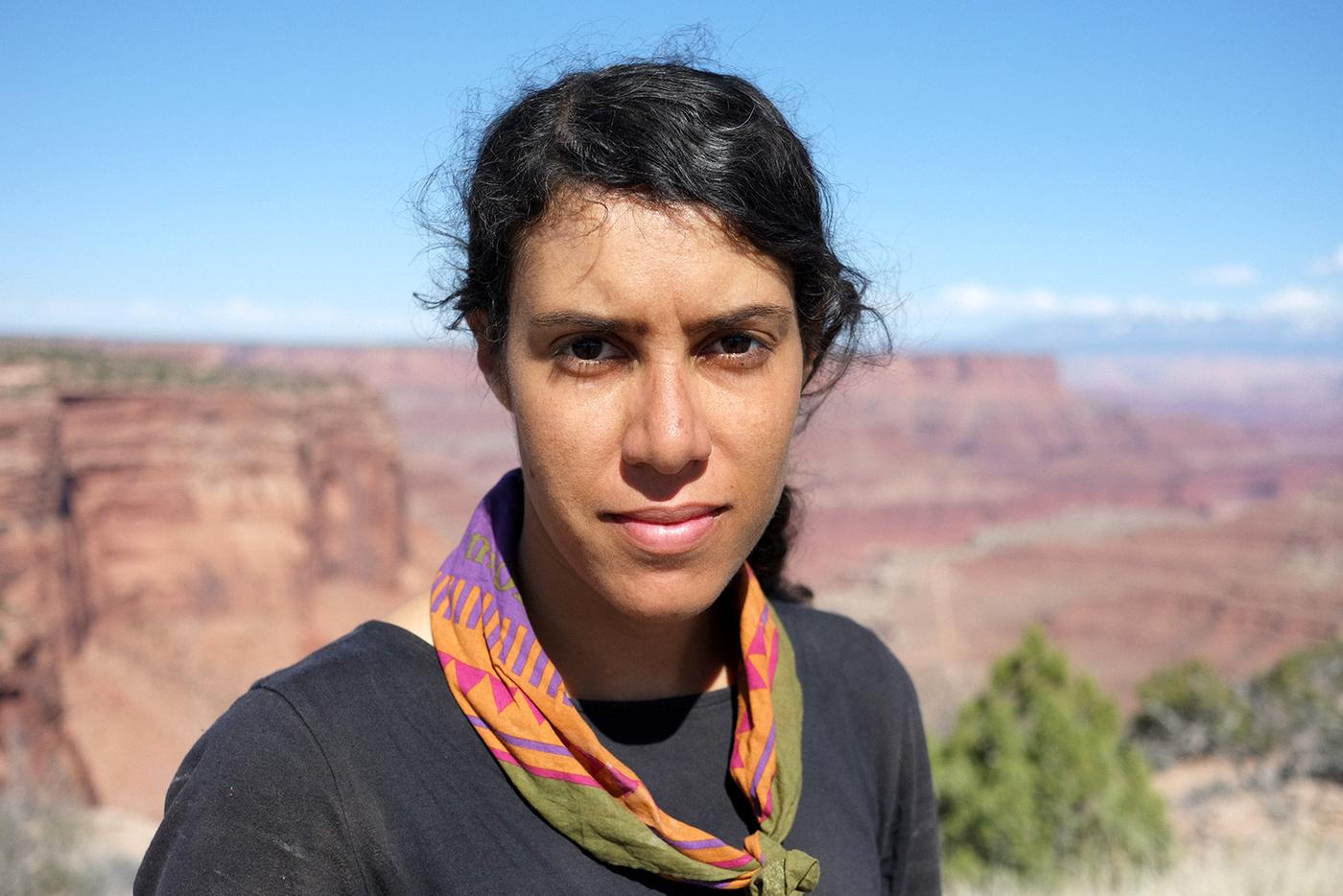 After deciding this year was the year I’d do the White Rim Trail I didn’t have much time to pull things together. Especially since I wanted to do it with my much better (at planning) half Elizabeth Browne and she didn’t have a bike capable of the ride. Liz and I split up the chores to get things done. She covered the permits, campsites and a driving schedule while I figured out all the bike stuff. Liz ended up riding my S.I.R 9 with bike packing bags we pieced together through friends. Niner Bikes loaned me an R.O.S 9+ to take on the trip, which I outfitted in all new Porcelain Rockets bags. Both of us still had to wear hydration packs for more water, but overall we had pretty dialed setups. 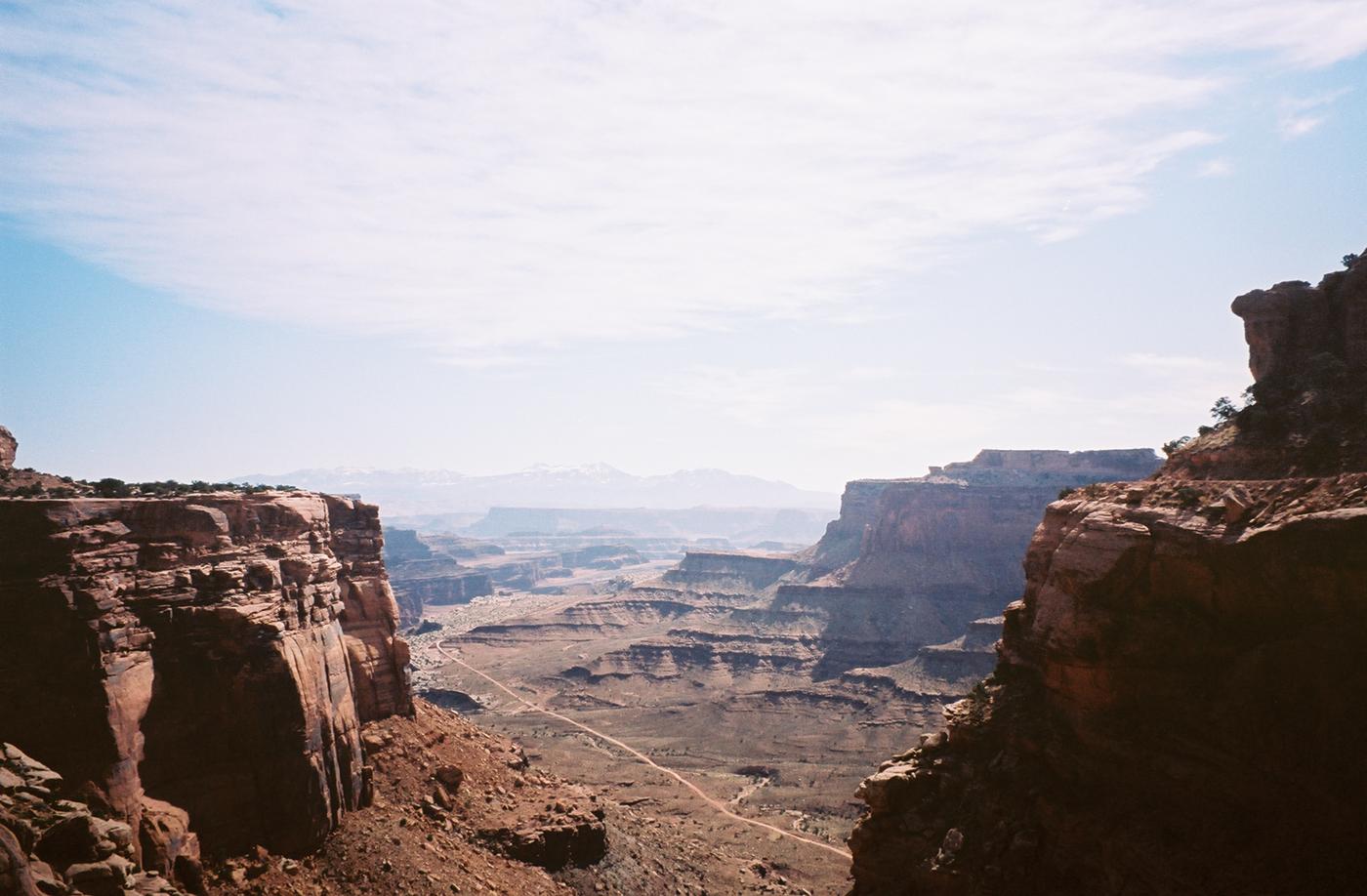 We did the loop clockwise, dropping in from the Island In The Sky visitor’s center on Shafer Trail. The only thing I can imagine comparing this to would be doing the Mammoth Mountain Kamakaze Downhill Race fully loaded! Once we got down into the canyon, I turned around to look back at where we had come from only to realize there was no way we’d be climbing back out now. The excitement was high and our adrenaline was pumping so much from the descent that we rode right past Musselman Arch without noticing. We carried the book “A Naturalist’s Guide to the White Rim Trail” and while it made us want to stop every mile to check out something amazing the experience of being completely consumed by the loneliest place in the United States was what really did it for me. 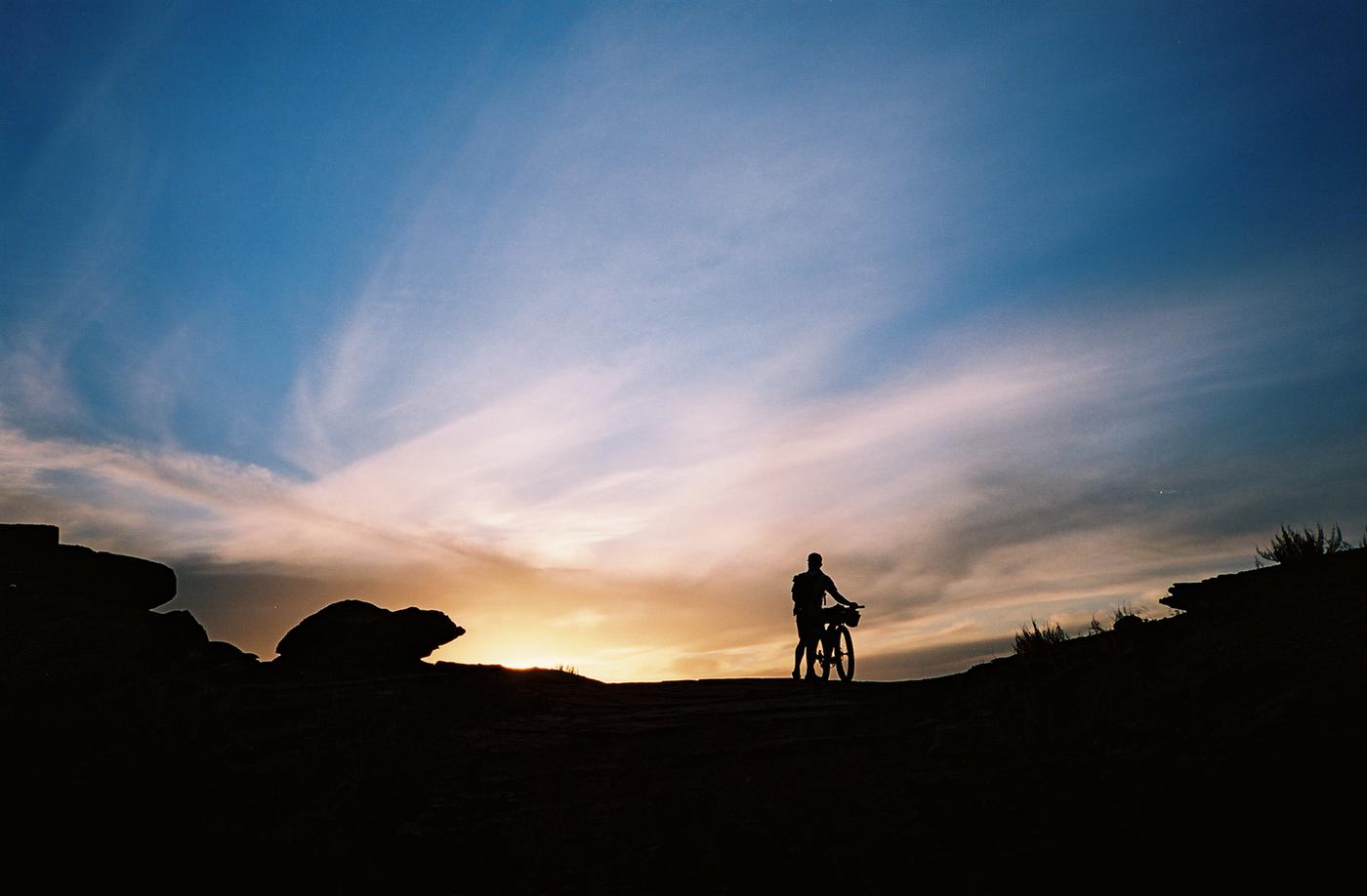 One of the real standout points on the ride was the climb up Murphy Hogback. It was absolutely mind numbing. If you’ve been there you know and if you haven’t you’ll just have to get there to experience it. I’m not sure if there is a human being out there that could do the climb in its entirety fully loaded. The sunsets in the canyon are stunning, but seeing them 10 miles before camp, and after a big climb, is rough. If I am ever out on the White Rim Trail again I’m definitely going to stay at Murphy Camp atop the Hogback. The knee deep moon dust of the Potato Bottom is also pretty discouraging when you’re trekking through it to find camp but is really fun to wrestle around in. 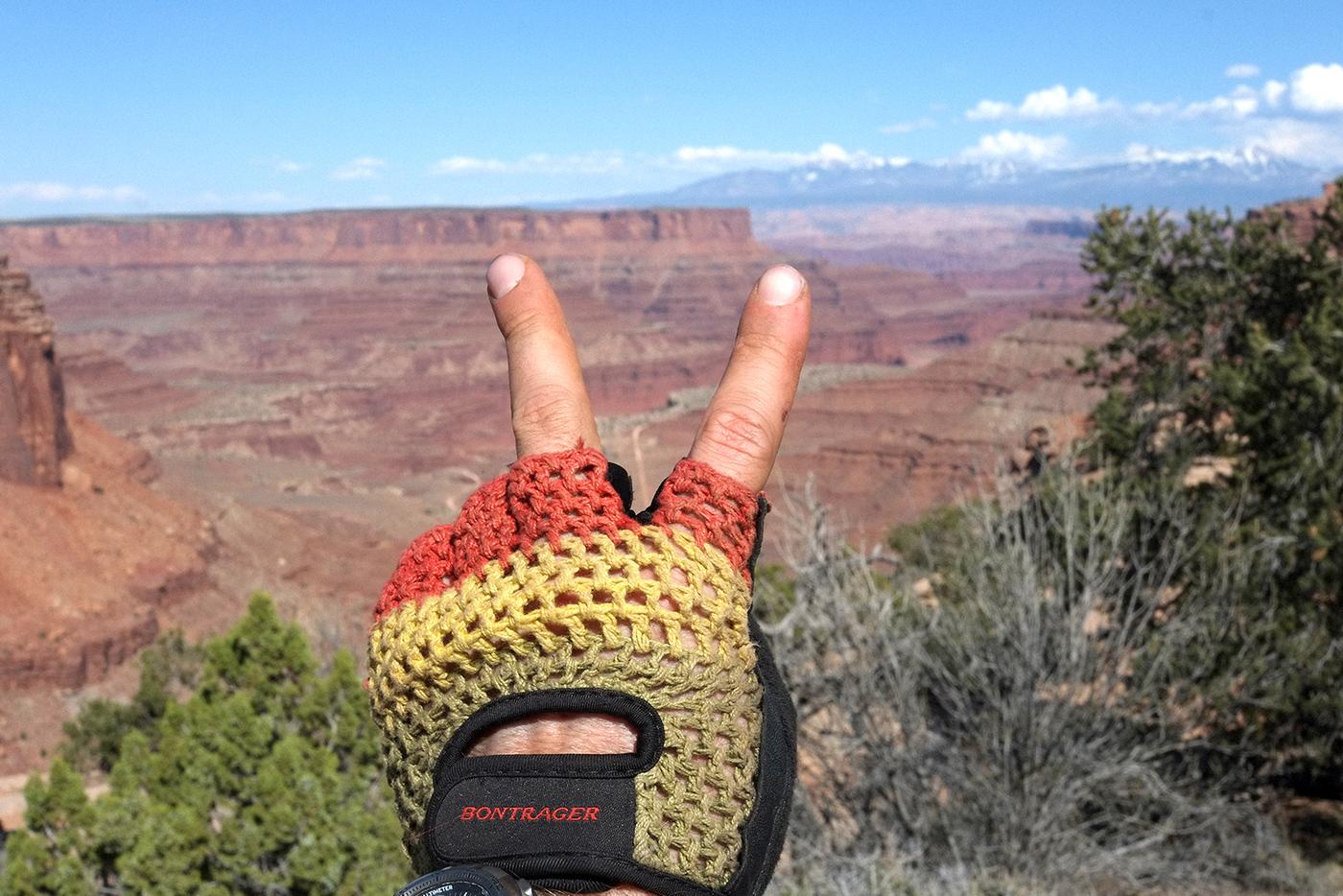 On the second day we rode in and out of the park boundaries before having to climb out of the canyon we so willingly threw ourselves into the morning before. Even after that climb there was still about 20 miles to get back to the Visitor’s Center where we left everything. One night and two days later we finished the ride I had been day dreaming about for years.

The only proper way to celebrate was to hightail it to Moab for Red Eye IPAs, jalapeno beer fries and a recap of one of the best parties ever!