J.P. Weigle is the gem of the Connecticut River Valley. From his small shop in Lyme, CT, he has built hundreds of beautiful randonneuring bicycles for Randonnée events worldwide and each year, he hosts the French Fender Day. Before Weigle was known for his rando bikes, he made a lot of experimental bikes. We’ve looked at his Ice Cycle in detail, a fat tire road bike, and today we present this pristine 1983 Time Trial Bike, with words by Noah Gellner and photos by the ever-talented Joey Schusler. Let’s get to it! JP Weigle is a treasure of the American framebuilding scene. As he tells it, his entry into framebuilding was a moment of serendipity when he flew to England in 1972 to join a framebuilding operation. After seven months he returned to the US where he ended up at Witcomb USA – a framebuilding shop whose other illustrious alumni include Richard Sachs and Chris Chance. When Witcomb closed its doors in 1977, Weigle went on his own and continued to build his reputation as a master artisan.

Weigle has an effortless style that results in bicycles that always look perfectly balanced. Over his decades as a builder, he has built road bikes, mountain bikes, and randonneur bikes – this last category being where he spends the vast majority of his time these days. 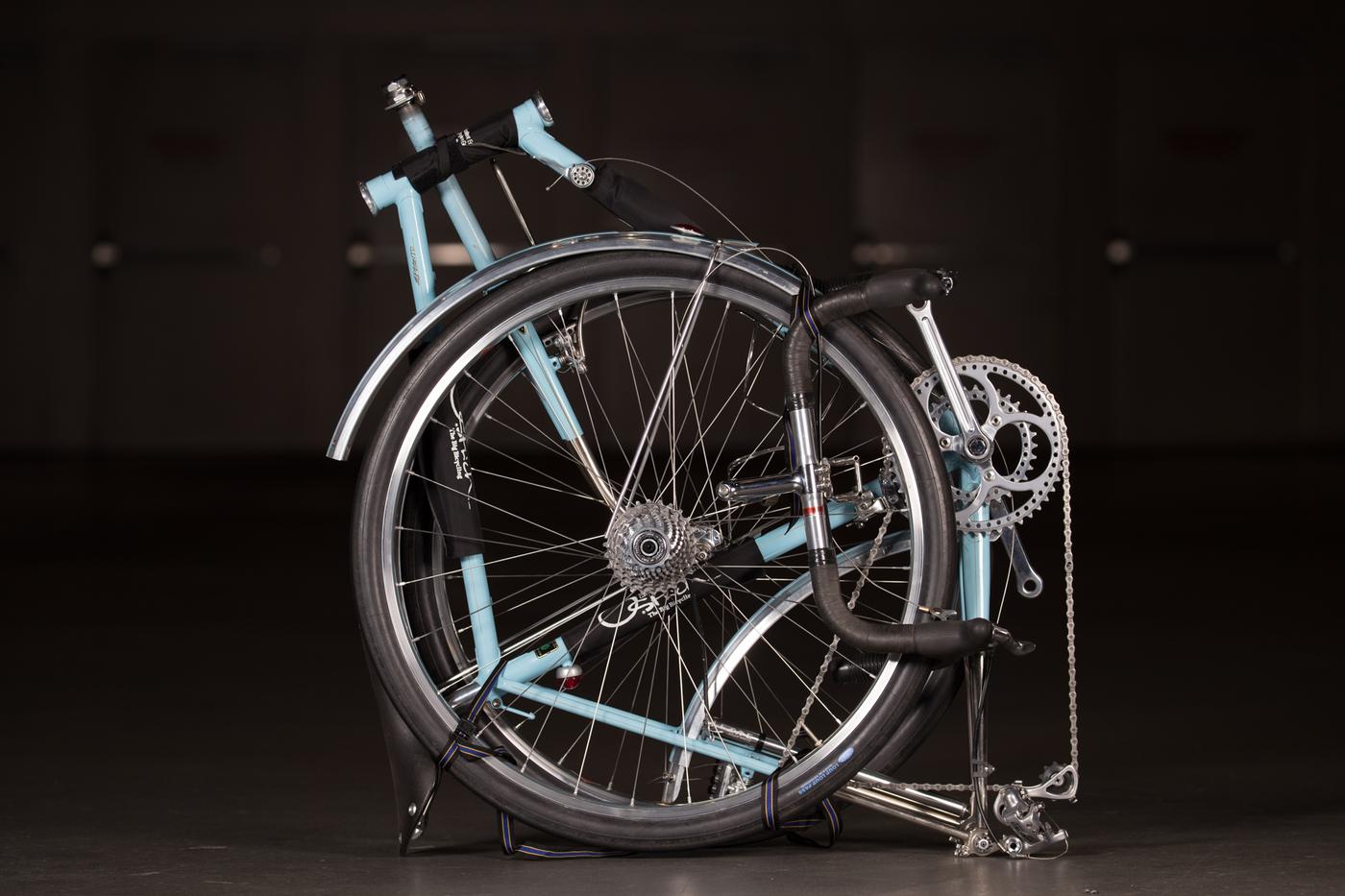 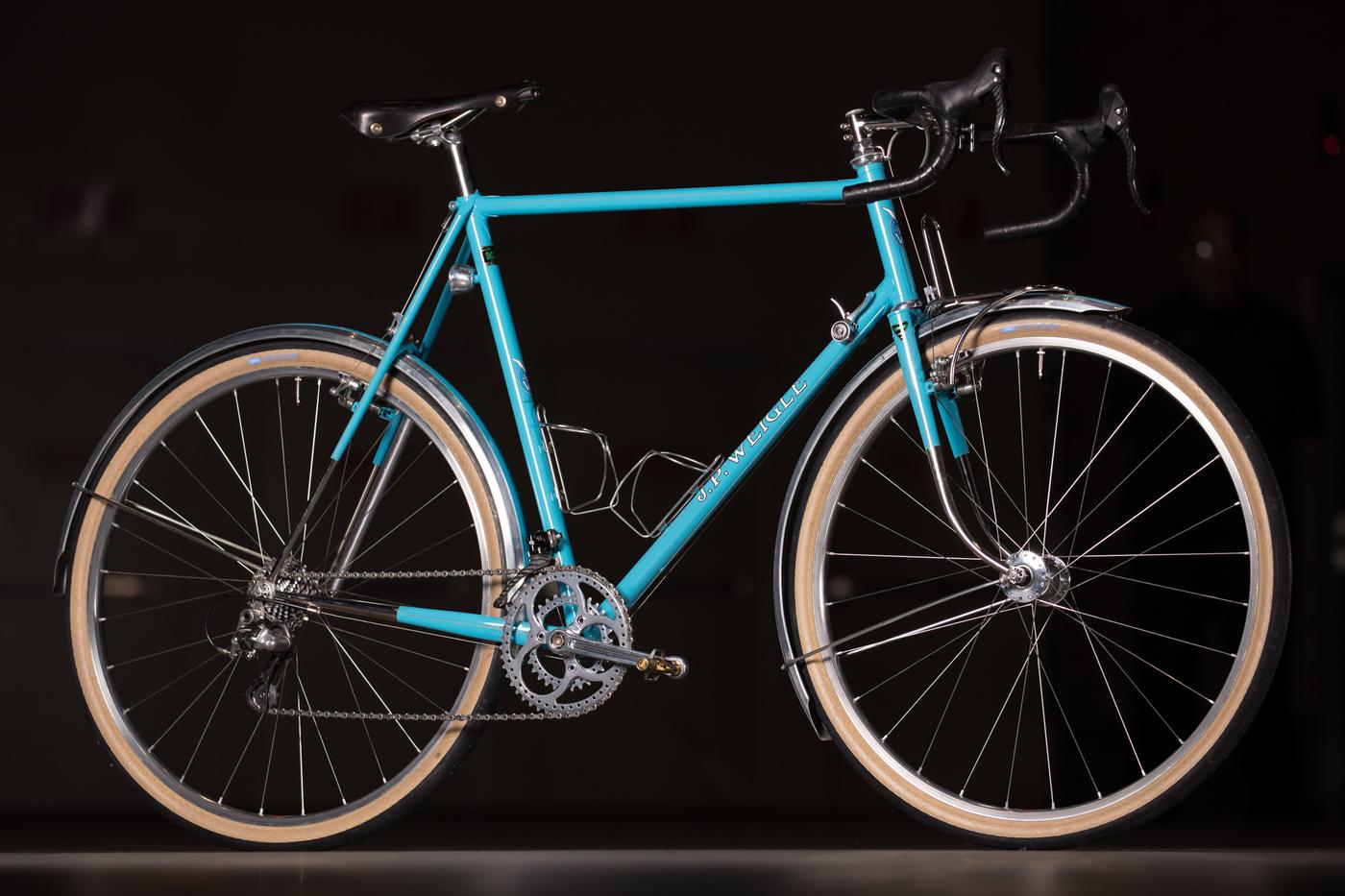 He builds steel bikes, joining tubes with crisp and elegant lugwork, fillet brazing, and gorgeous bi-laminate joints which blend lug work and fillets. He appears as a playful master, enjoying exploring and constructing custom lugs and fixtures. He does his own paintwork which fully expresses the beauty of his work. He has developed custom decal sets for some bikes, becoming JP Wiggle.

Focusing on his artistry almost misses the point of JP Weigle’s bicycles though – he builds machines for people who love to ride. The love may be expressed in the desire to explore nature on an MTB, the open roads on a classic road bike, more comfortable distance on a randonneur machine – or exploring pure speed on a time trial bike. 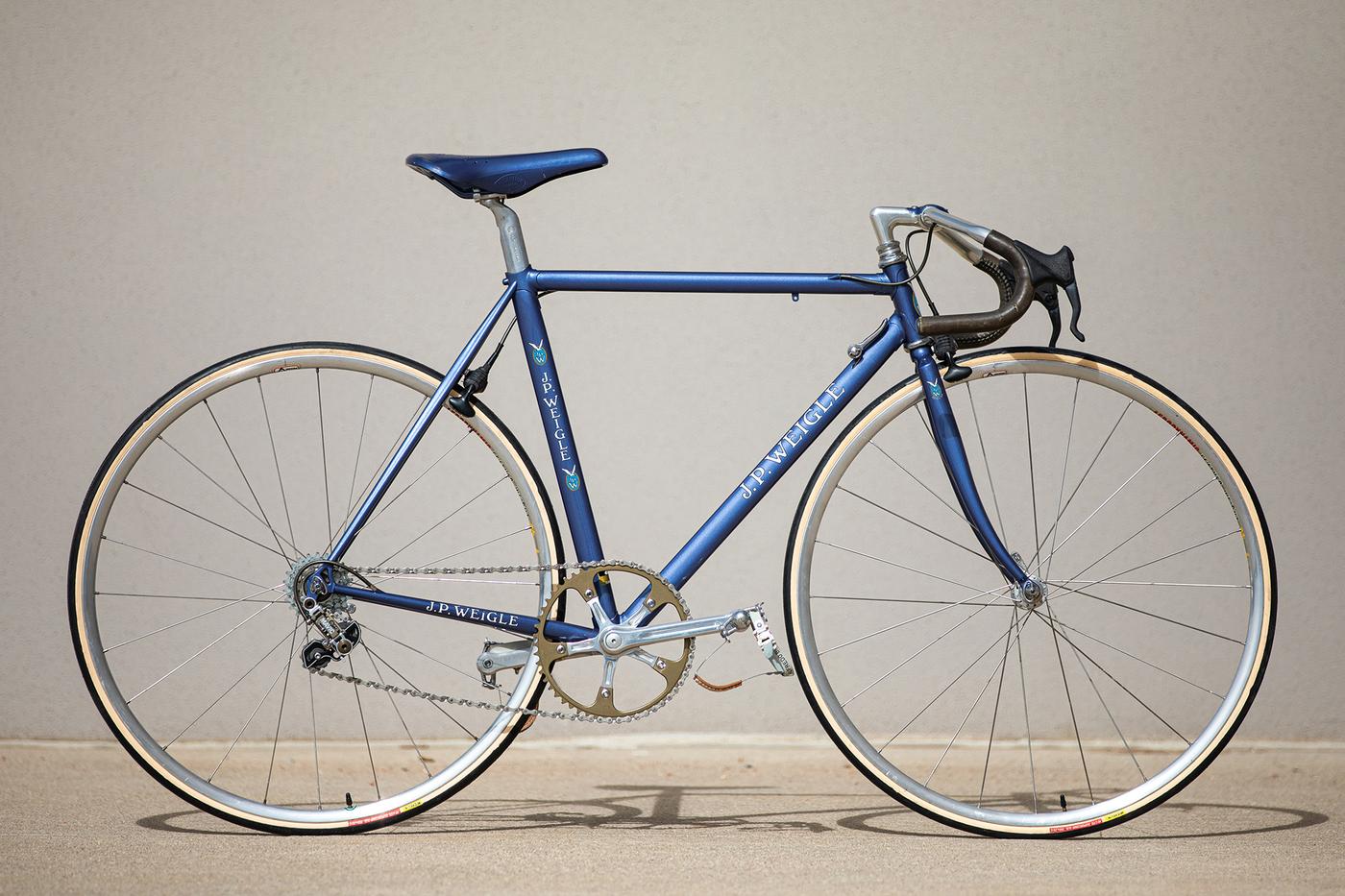 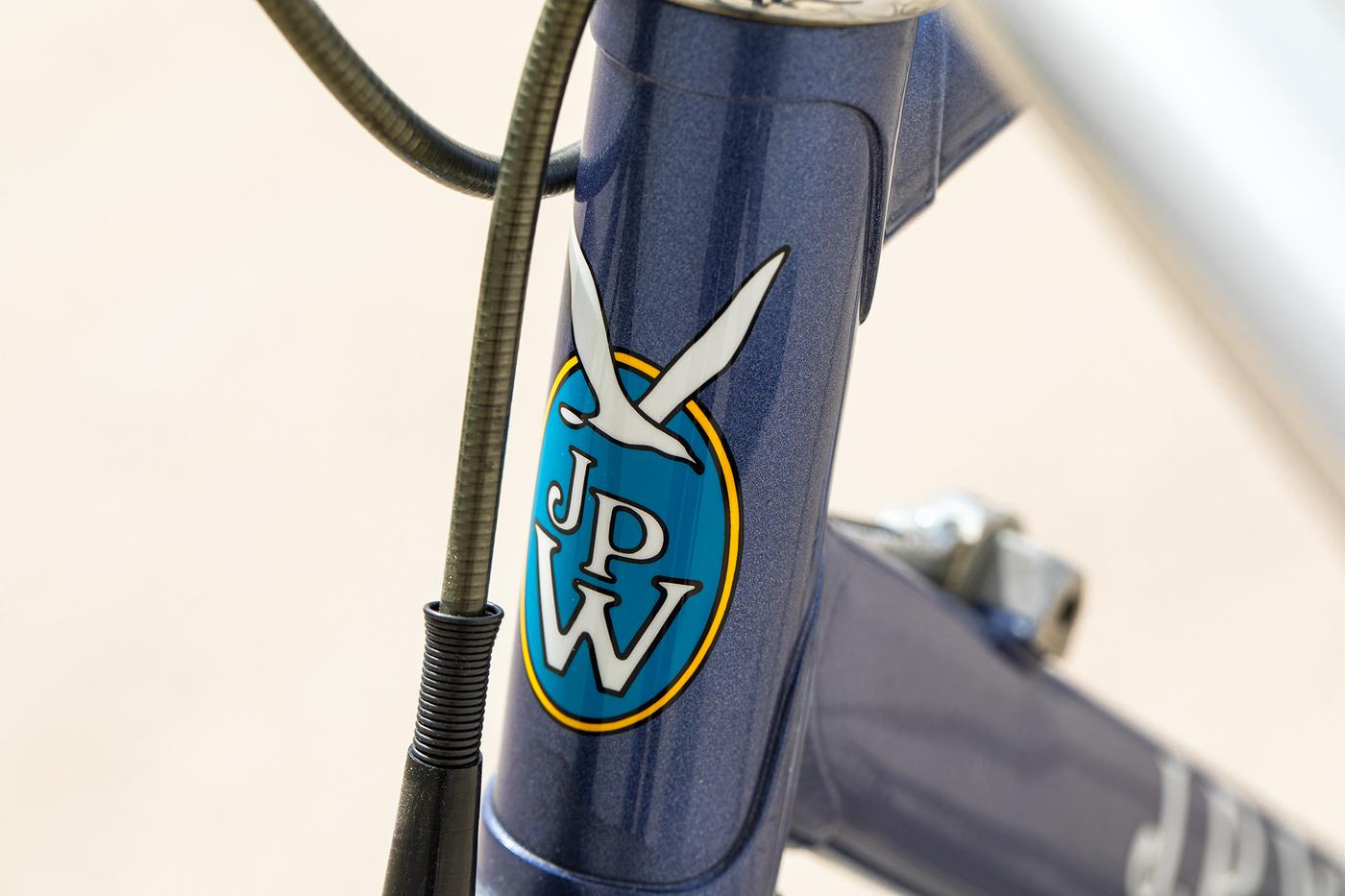 This bike is an early style time trial machine. The frame geometry is a classic diamond but the tubes are made from an early aerodynamic teardrop-shaped tubeset from Columbus called Air. The focus on speed is accentuated by the lack of braze-ons for a front derailleur or associated shift lever – this bike is big ring only. Sur plate. Cabling is all internal in an effort to reduce additional drag. 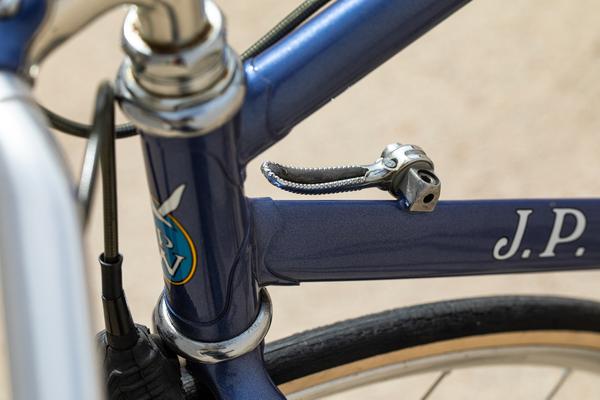 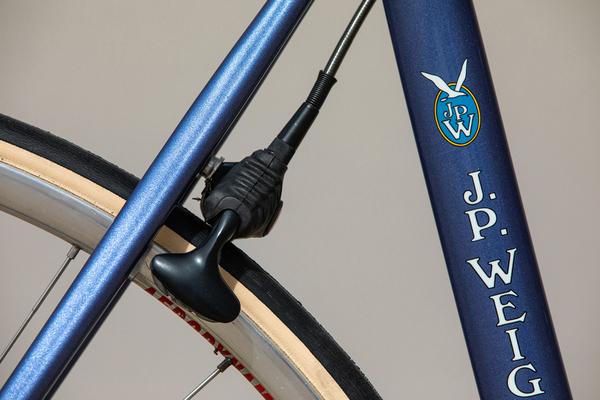 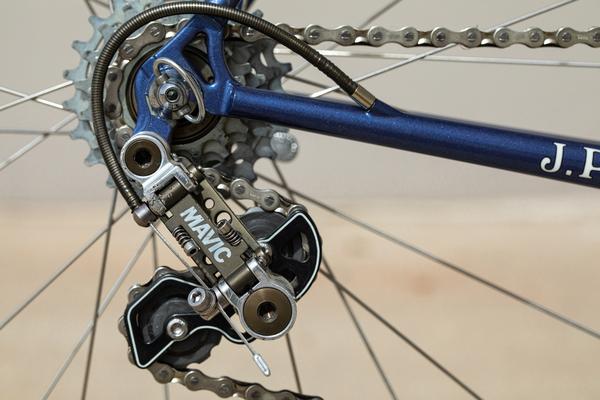 When I acquired the frameset, I knew it had to have a build that celebrated Weigle’s work and the bicycle’s spirit. To that end I prepared a build that showcased the eclecticism and exploration of early 1980s componentry, especially with aero flourishes. This bike which saw action in East Coast time trial series continues to express the pinnacle of bicycle artistry of the early 1980s. 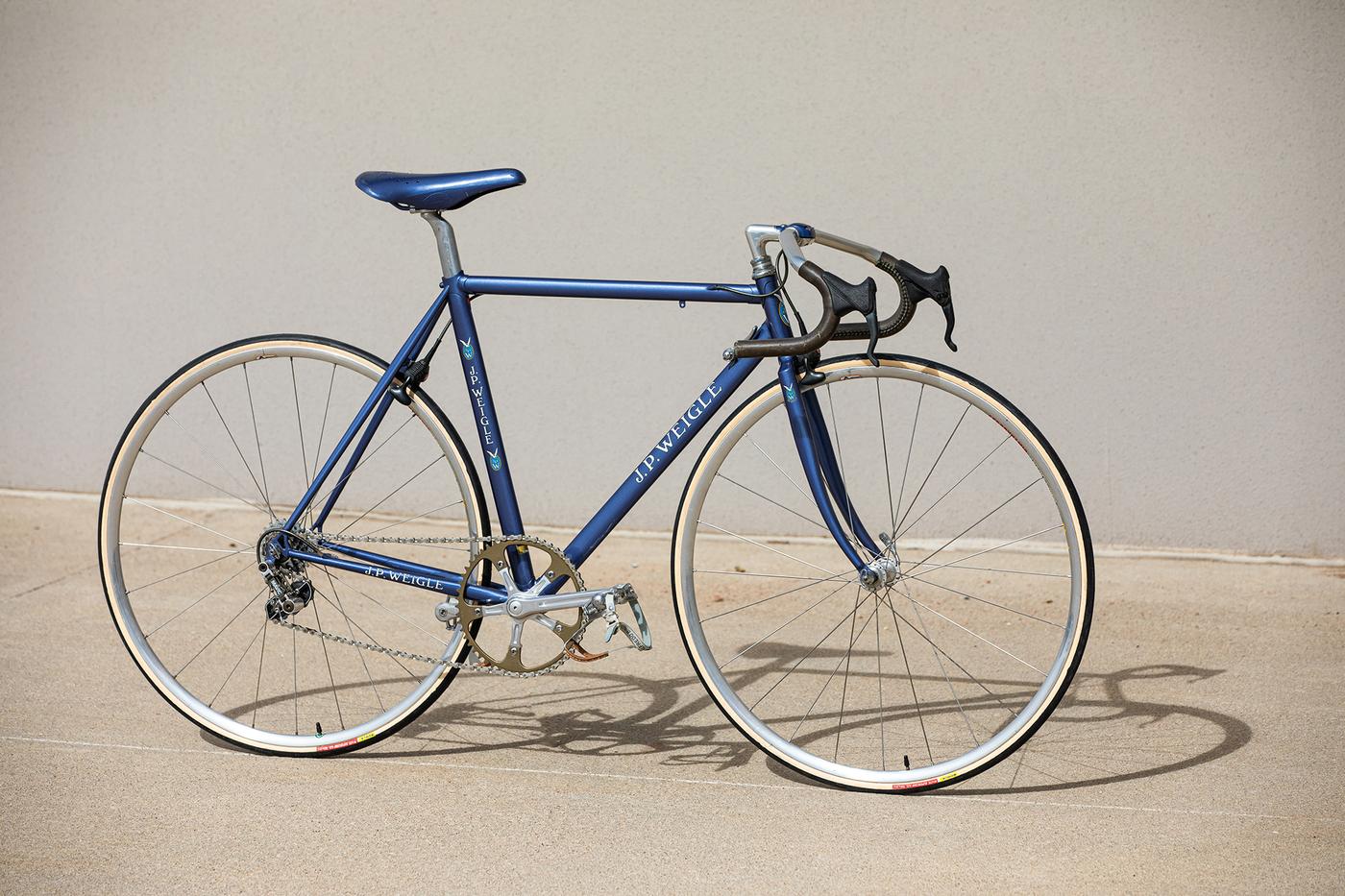