Cari and I didn’t want to deal with the online lottery or the in-person lottery, so we opted for a region in the Vermilion Cliffs National Monument that, in a lot of ways, offers more bang-for-your-buck in terms of geological wonders, at a price of extreme isolation. We swung through the Kanab BLM office and spoke with a ranger about the road conditions out to the region known as White Pocket. 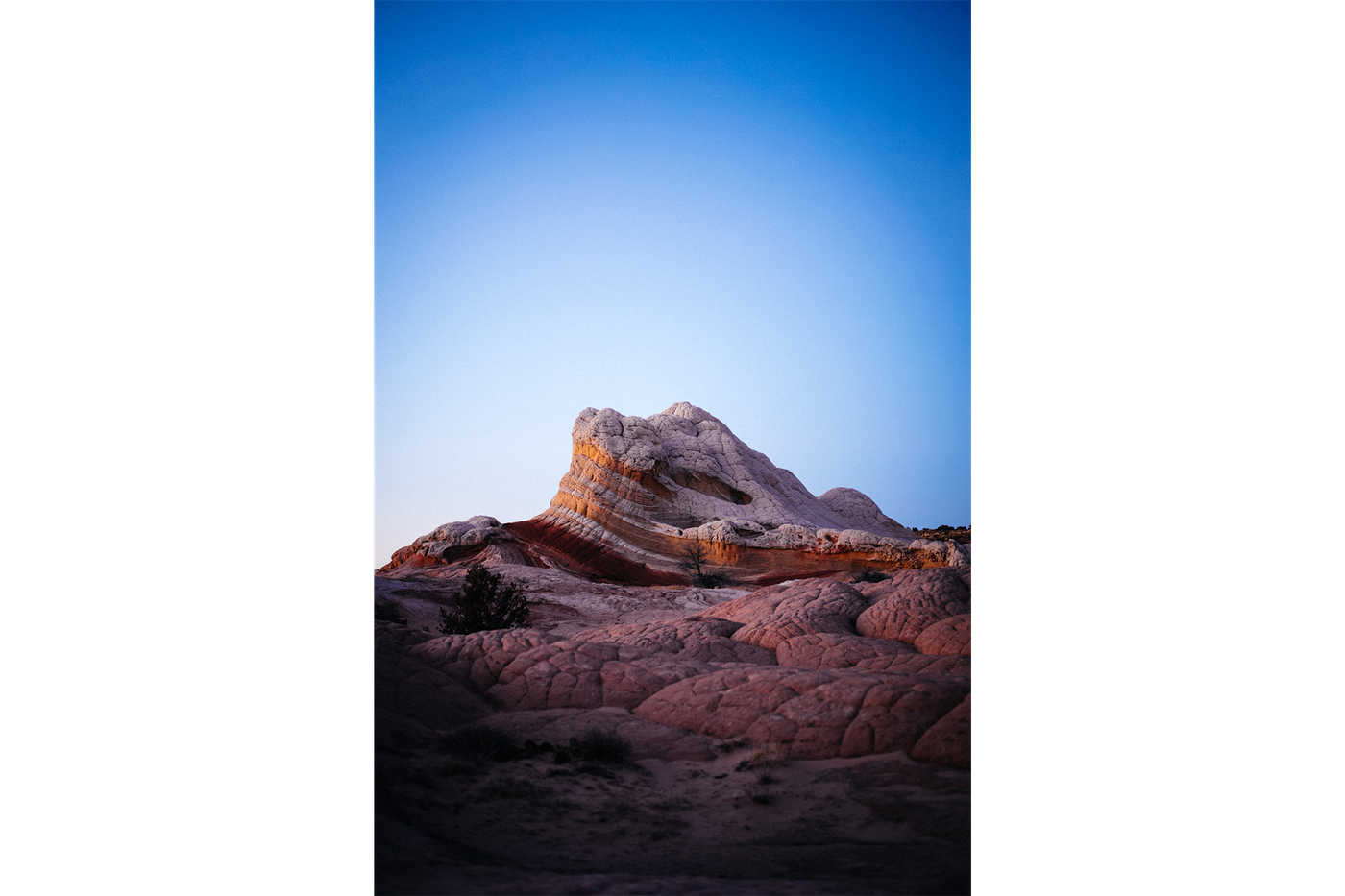 Now, I’m conflicted about this. You know, “blowing up the spot,” but the truth of it is, White Pocket is no secret. In fact, when you don’t make the lottery for Coyote Butte North or South, the BLM will point you to White Pocket, pending vehicle approval. That “bullshit filter” keeps out the riff-raff and is one of the reasons why I have an extremely capable rig. I don’t want to limit our exploration because our vehicle won’t make it. White Pocket requires a HIGH CLEARANCE 4×4. Not an AWD vehicle. It requires 4×4. If you don’t know the difference, Google it.

No matter what marketing tells you, AWD is not 4WD. If you attempt to get to White Pocket in a lifted Subaru, your explorative ego will be crushed. The sand on the roads out there is deep. So deep it was up to my axles, scraping as we pushed through with aired down tires and 4WDL. My fuel economy suffered and it was slow rolling. When it rains, or if the morning was dewy, this sand turns into peanut butter mud. Do not attempt this course unless you’re in a high clearance, 4×4. Ok? Also, I’m not going to tell you how to get there. Figure it out for yourself, but know this: the many sites that tell you how to get there are very wrong. Instead, talk to the BLM office in Kanab, buy a t-shirt, or a map, take lots of water and food. Be polite to the workers there, who have to answer dozens of idiotic questions each day, with a smile. Give them a high five and be a good patron. This goes without saying but there is no cell reception out there. Be safe. Be a steward. If you make it out, please follow the leave no trace principals. Don’t remove plant matter, don’t gather firewood, don’t leave toilet paper, stay on the trails and please, for the love of Bob, don’t scratch your names in the sandstone. You can camp out there but do so in a low-impact manner. Pack out your charcoal, wash off the stone and remove the fire ring. This shit is serious. People trash our natural wonders. Don’t be one of those people. White Pocket falls in the Paria Plateau and is located within the Vermillion Cliffs National Monument. This extremely sandy area is 20 by 20 miles and is bordered by Buckskin Gulch, the Paria River, giant cliffs, and House Rock Valley. This region is one of the sandiest places I’ve driven through. I’d love to encourage a bikepacking trek out there, but the truth is, you’d be walking most of the 30 miles out. This zone is featureless, but along the backroads, you’ll come across teepee-like sandstone formations, as well as various other small zones of the underlying Navajo sandstone. This sandstone has been eroded by time to form various shapes in deep red, white, yellow and other tones. Like most of Utah, this part of Northern Arizona, along with Nevada, Colorado, and parts of Wyoming, was much like the Sahara desert 190 million years ago. Filled with an endless sea of sand, unforgiving sun and little vegetation. Monsoon season brought water once a year to the organisms that called this region home. It was a harsh zone, yet it was ripe for something special to occur. Geologists believe the atmosphere above this region was violent, causing great storms from above and below the soil, with massive earthquakes being frequent. 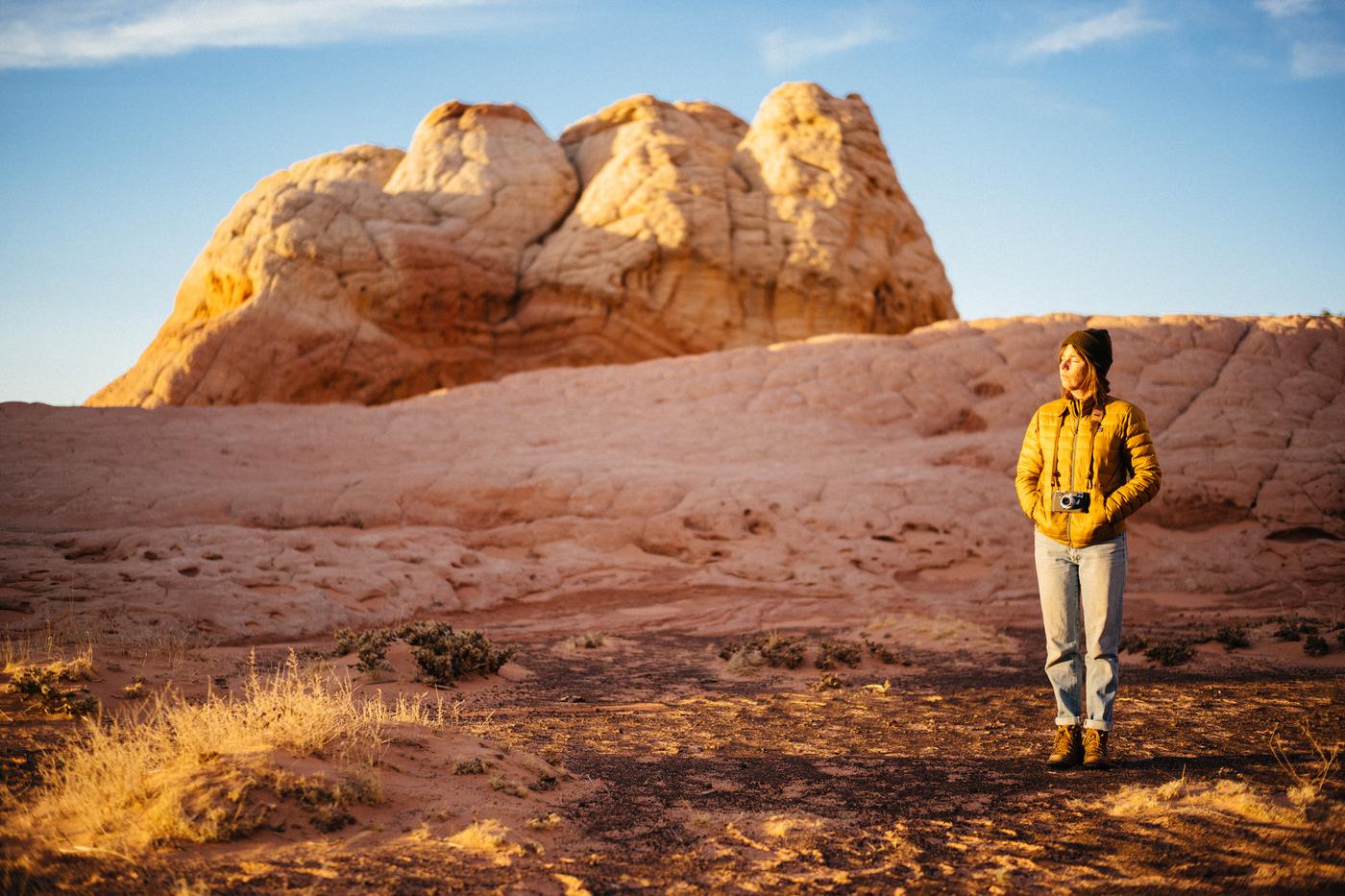 The various shades of red, pink, yellow and brown Navajo sandstone are due to the oxidation of iron-bearing minerals within. These deposits, over time, are eroded and “freed,” in the form of little round pellets, ranging from the size of a pea to a ping pong ball. Explore the region enough and you’ll notice them, congregating at the lowest points of the region as they roll down the faces. You can spot these deposits by looking for rust-colored spots in the white sandstone. The red and pink colors are present due to the presence of hematite, while the yellow and brown are produced by limonite or geothite.

Now, what causes the “brain-like” and swirled characteristics? Well, that’s still a bit of a mystery. Geologists believe the swirls, or unusually soft sedimentary formations, formed when separated layers of sediment were folded and sheared due to gravitational forces, changes in groundwater, or earthquakes. The brain rock has polygonal cracks, which are the biggest unknown. Some believe thermal contraction, moisture cycles and the drying process of these sediments created higher density networks of rock, surrounding lower densities. Eventually, erosion left these cracks exposed. 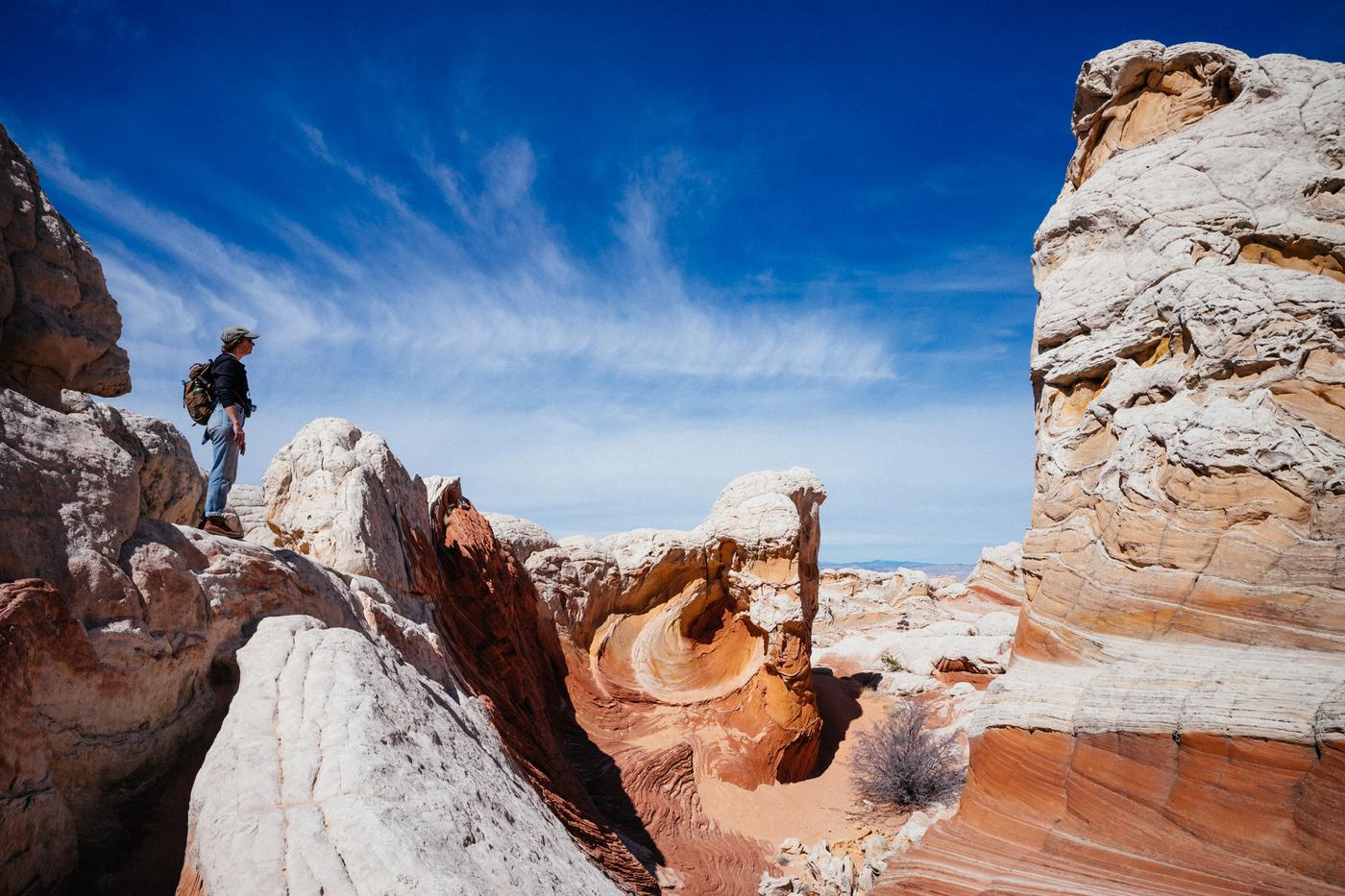 We had a plan. Loosely, anyway. The same group of people who met up in Moab a year ago wanted to return again this year before the responsibilities began stacking up. Finally, after a bit of back and forth, a week was penned in the calendar, sandwiched between the Green River Rocks festival and the first week of April. I figured Cari and I should just road trip out, the week before the mountain bike trip, en route to the Green River Rocks festival and hit geological zones along the way.

So, the day I landed from Land Run, we hopped inside the loaded-down Land Cruiser and made our way to Kanab, Utah. We hit a few snags along the way, realizing we’d left some essential gear at home; my Pelican Case with all my Canon gear, but luckily, I had my Leica with me, so I guess it worked out pretty damn good. Shooting the Leica for a week can be tedious; since it’s manual focus and the sensor fires a bit hot, like slide film. You’ve really got to meter intelligently and using wide or long lenses can be difficult to use without the EVF, which was, you guessed it, in the Pelican case. After rolling through Kanab, we made our way out to White Pocket. About a mile from the end of the road, a duo of super n00b tourists in a rental Ford Expedition hit my truck. We had pulled over, giving them more than enough room to pass, but the super green explorers didn’t slow down and were swerving all over the road. Luckily, the door took the brunt of the damage, but I was pissed. They knew it too and had no clue how it happened. I gave them a lesson in backcountry road etiquette; slow down to reduce dust and because it’s safe/common sense, wave and allow plenty of room for either vehicle.

Karma. Perhaps I did something to deserve this? Ah hell, it’s just a door.

We got to camp, set up the rooftop tent and walked out to watch the sunset over the Navajo sandstone formations. It had been a long day, so we crawled inside our down blanket nest and braced for a cold evening. The morning came, upon which we realized all our water was solid ice, save for an emergency 5-gallon jug inside the truck. Coffee. More coffee and breakfast came. We ate something special to enhance the day’s journey. How long would it take for us to walk around a square mile? Three hours? Four? 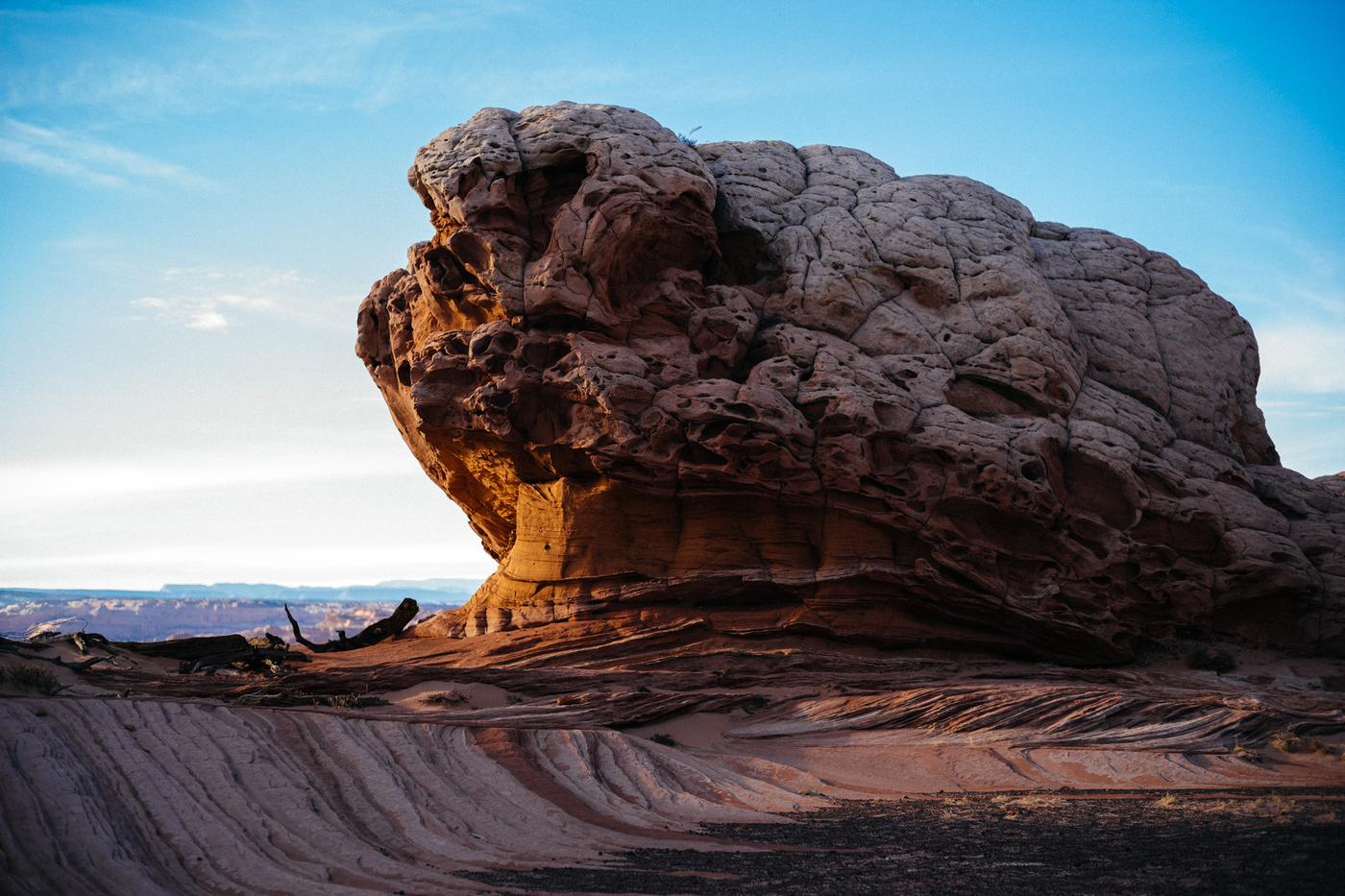 We were out there for over ten hours. Ten hours. Of which we: forgot to re-apply sunscreen, eat anything substantial and I shot 500 photos. Max came up and asked for water. Hey, I said we “ate something.” Bad parents. Yikes. At one point, I took off my shirt and pants, just to ‘lizard it’ on a rock in a private nook, admiring the swirling clouds and round rainbow that formed around the sun. I needed to form a name for this journey…

The Chimeric Cacophony and the Cauldron of Chaos Tour

Yep. That’ll do. Nature is metal, after all. As the sunset, the temperature fell and we headed back to camp. Sated, for now, joking with each other that we could just go home now; nothing would compare to this experience. Boy, were we wrong! More to come…