This Readers’ Rides comes from Olly who customized his Trek ProCaliber 9.8SL into a Monstercross. Let’s follow the process along with Olly below! Ever since I first got into riding MTBs back at the start of the 90s I’ve had a slightly unusual view on what the ‘right’ bike was for me. I started my off-road odyssey on a German BMX with drum brakes and 4 gears. Then I thought I was John Tomac and rode with drop bars on a MTBfrankenrig for a couple of years. I had all the standard-for-the-90s long stem/narrow bars/huge outer chainring/1.7” tyres/thumbshifters/bar ends combinations which I thought made my bike ride better and most of friends thought made me look slightly crazy. 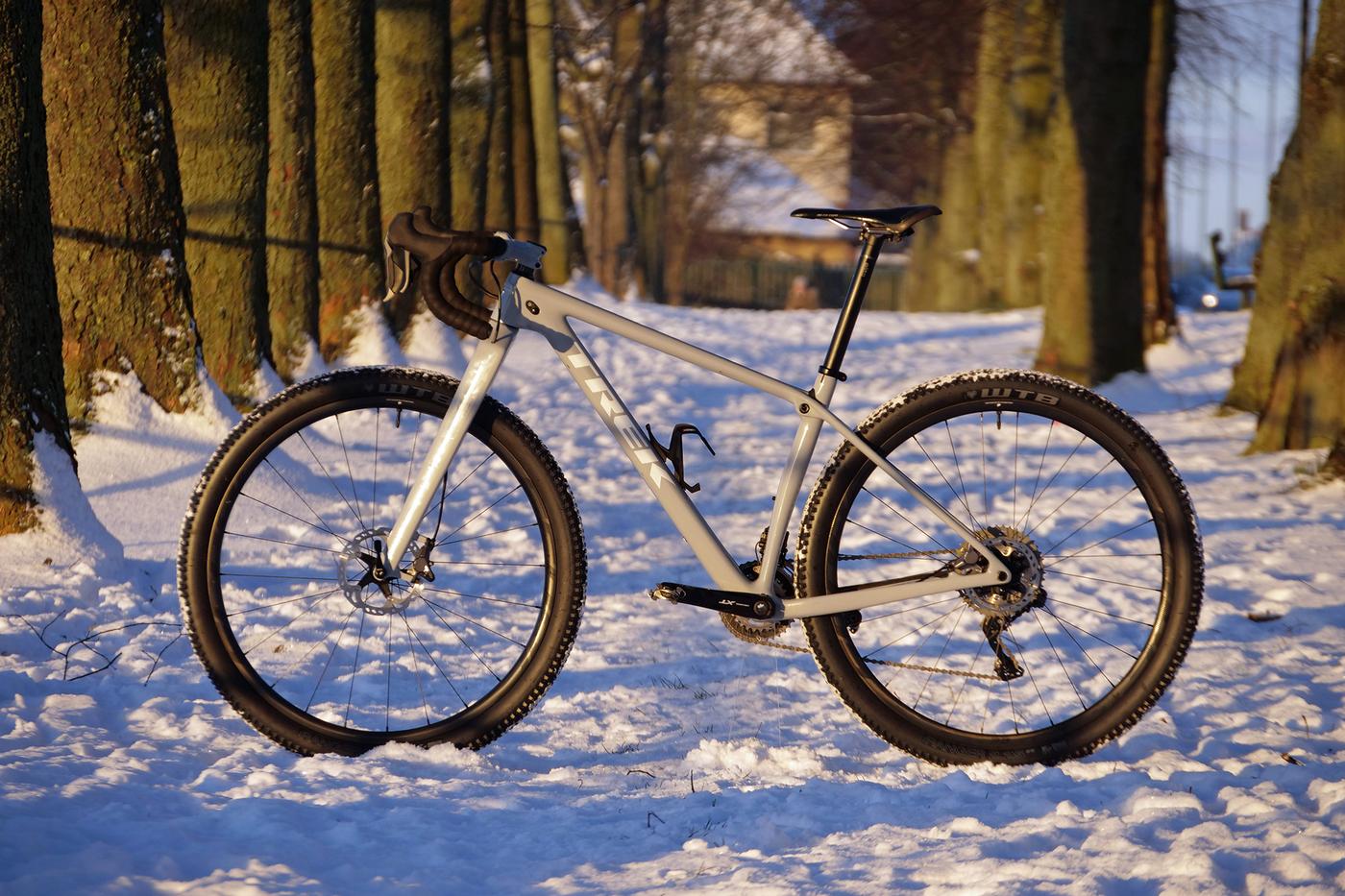 Fast forward quite a few years and none of my friends were the least surprised when I decided to convert my perfectly functional Trek Procaliber 9.8SL into a monstercross bike. It came about because I was a super keen CX fan, but instead of being a CX racer, I was more of a CX everywhere-er. From 2008 onwards, I used a CX bike on almost all of my MTB rides. My local trails at the time were of the smooth, fast rolling, roots-not-rocks type and a CX bike in my mind made way more sense than a heavy, energy sapping XC MTB. Then in 2013 I moved to the opposite end of the country and my local trails became slightly more technical, a bit steeper and a bit rockier. On some of them my CX bike was fine, but I was reaching the limit of what was safe and fun. I shoehorned in the fattest tyres I could fit, but was always hankering after something with capacity for bigger tyres, but with the same snappy, rocketship feel of a CX bike. I got the Trek in 2016 and was instantly hooked. It was super-fast, lightweight and had an engaging, responsive ride. I still felt a little over-biked on my local trails though. I wanted a ride that was a bit racier. Something that was a bit more of a challenge to keep it rubber side down. The idea for dropped bars and a rigid fork was still in the back of my mind, but back then (in an era pre-Shimano GRX), mechanical road shifters didn’t play nicely with MTB mechs and having tried adaptors like a WolfTooth tanpan, I wasn’t completely convinced. Then one day a message popped into my inbox from a good friend who knew what I was thinking about doing. He’d found an online bikeshop selling a Shimano XT Di2 drivetrain at a price so ridiculously cheap we both assumed it must be an error. I knew that Di2 road shifters were compatible with Di2 MTB mechs, so a swift plan was hatched. I ordered the drivetrain before it was pulled/sold-out and a few weeks later had box of shiny bike bits in my hands. Initially I built the bike up as a 1x drivetrain, but it was so fast I found myself constantly spinning out and wanting bigger gears. Initially I ran a SRAM 10-42 cassette which worked perfectly OK and the 10 tooth smallest cog gave me some extra speed, but the shifting (with a Shimano drivetrain) wasn’t 100% crisp. I was always on the lookout for more speed, more capability, more fun. My anti-fashion streak was still present and I went back to a 2x drivetrain, which revolutionised the ride. A bunch of other upgrades slowly arrived as and when finances allowed. 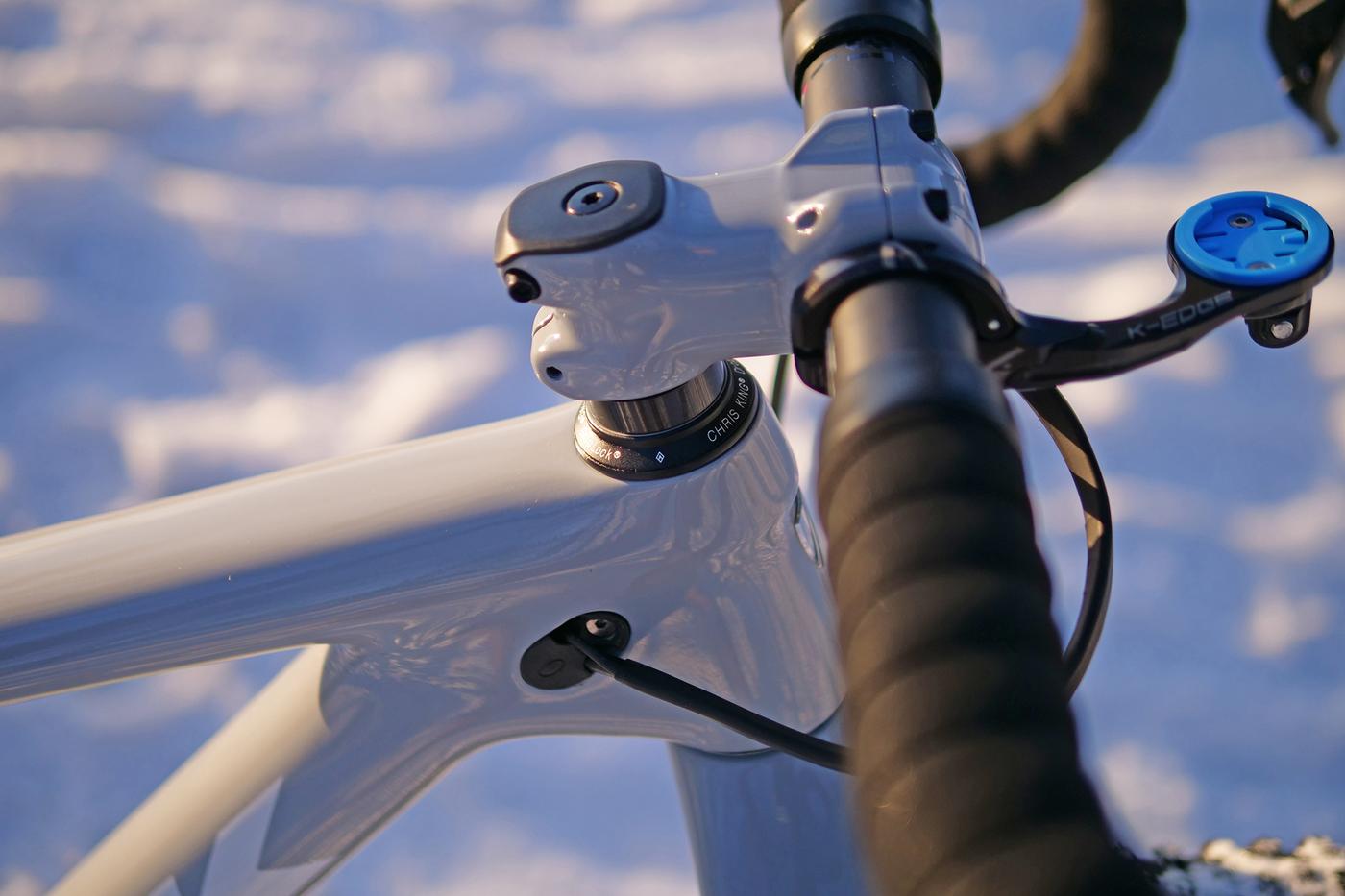 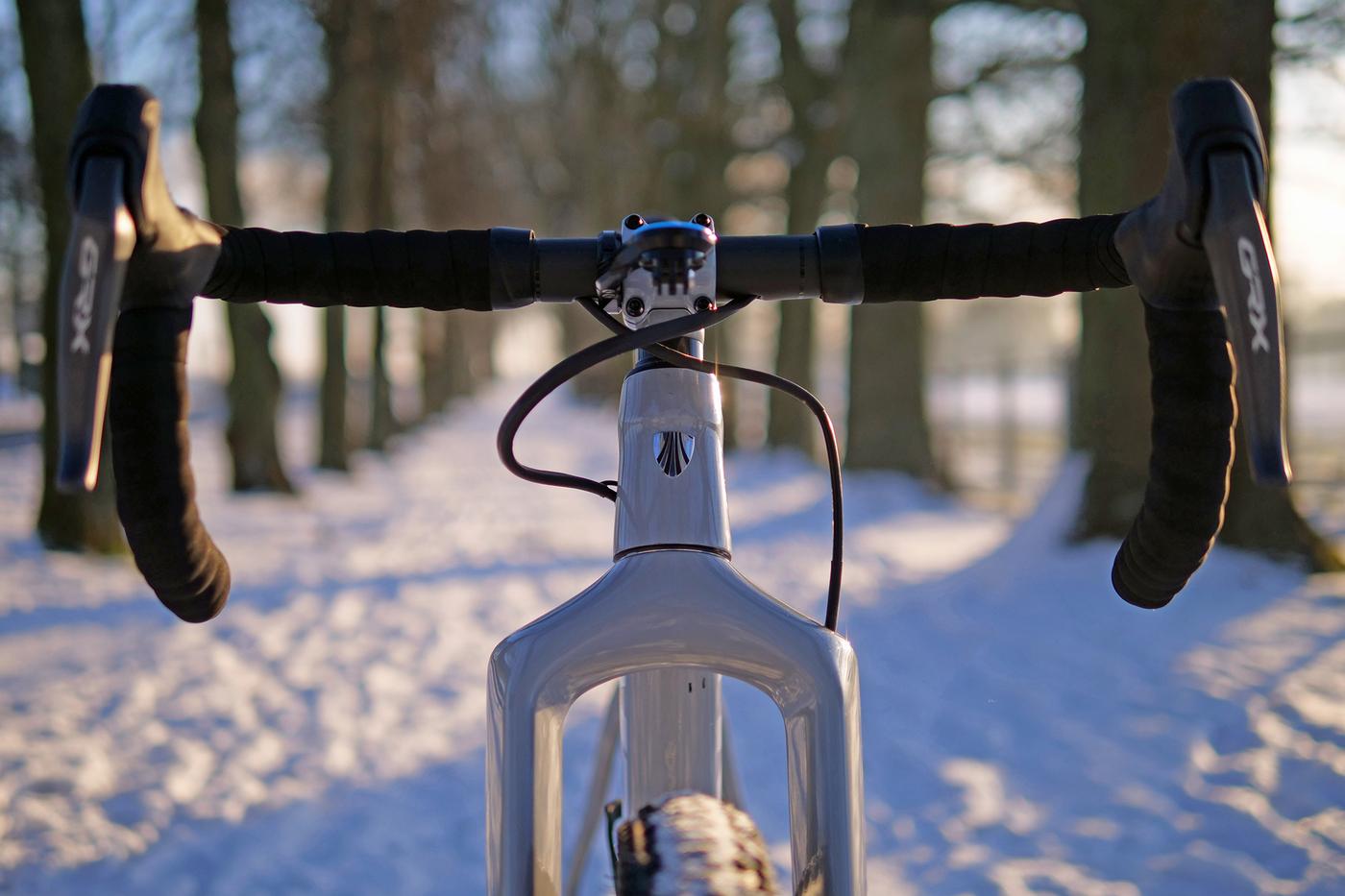 At the end of 2020, I’d got the spec exactly where I wanted it to be, but the frameset was now 4 years old and was starting to look a little battered around the edges. I’m super careful how I look after my bikes, but everyone gets a few scratches and marks eventually. I decided it was time to get it re-sprayed. I figured I would get the frame, forks and stem all done to give it a more unified look. I sent it off to Stu at BlackCatCustom who had sprayed another bike for me previously. He’d done a fantastic job and I knew he was the right man for this one. He rolled his eyes a little when I told him I wanted slate grey (apparently everyone wants slate grey at the minute) but now that he’s seen the finished job he approves! 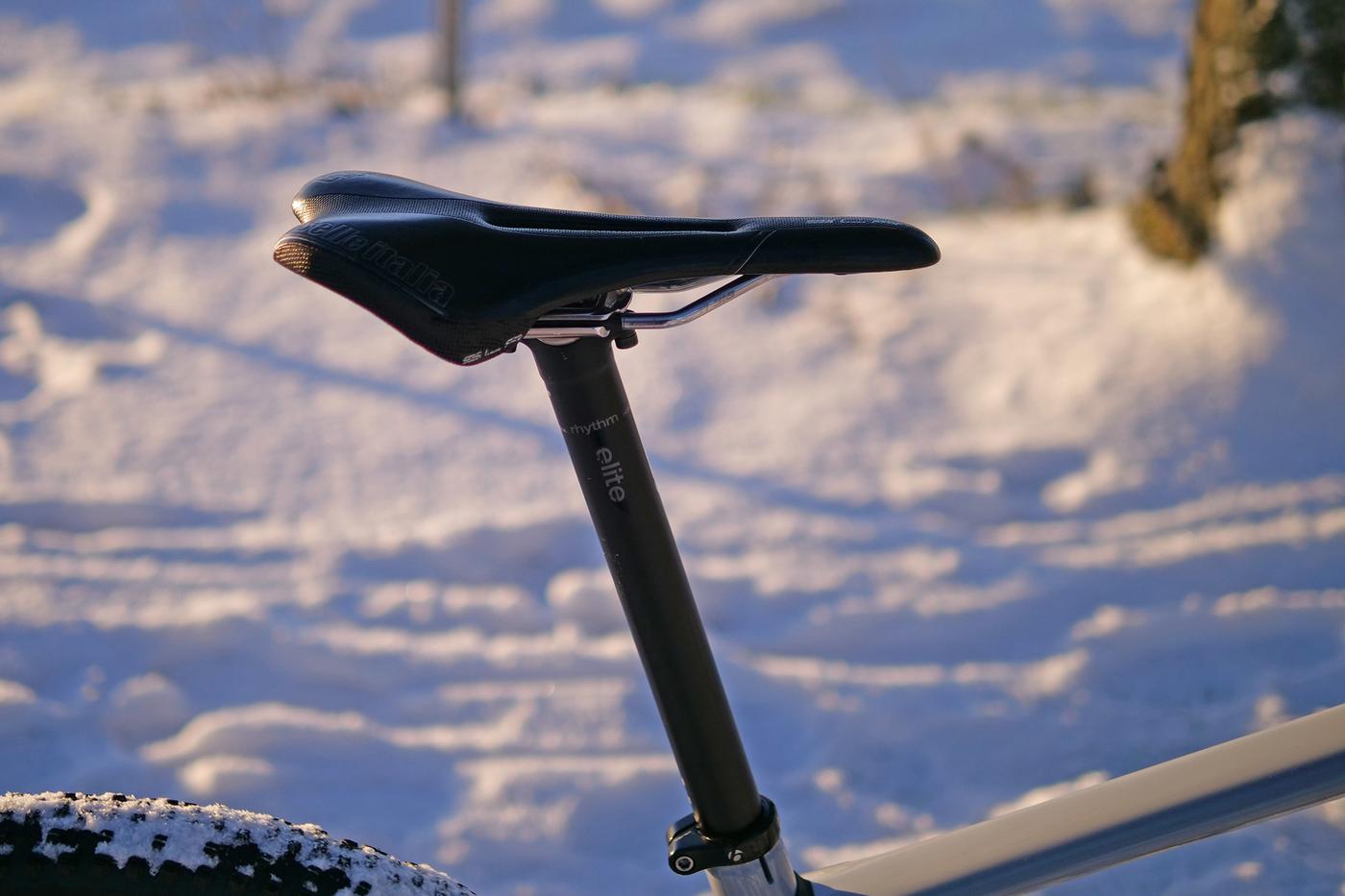 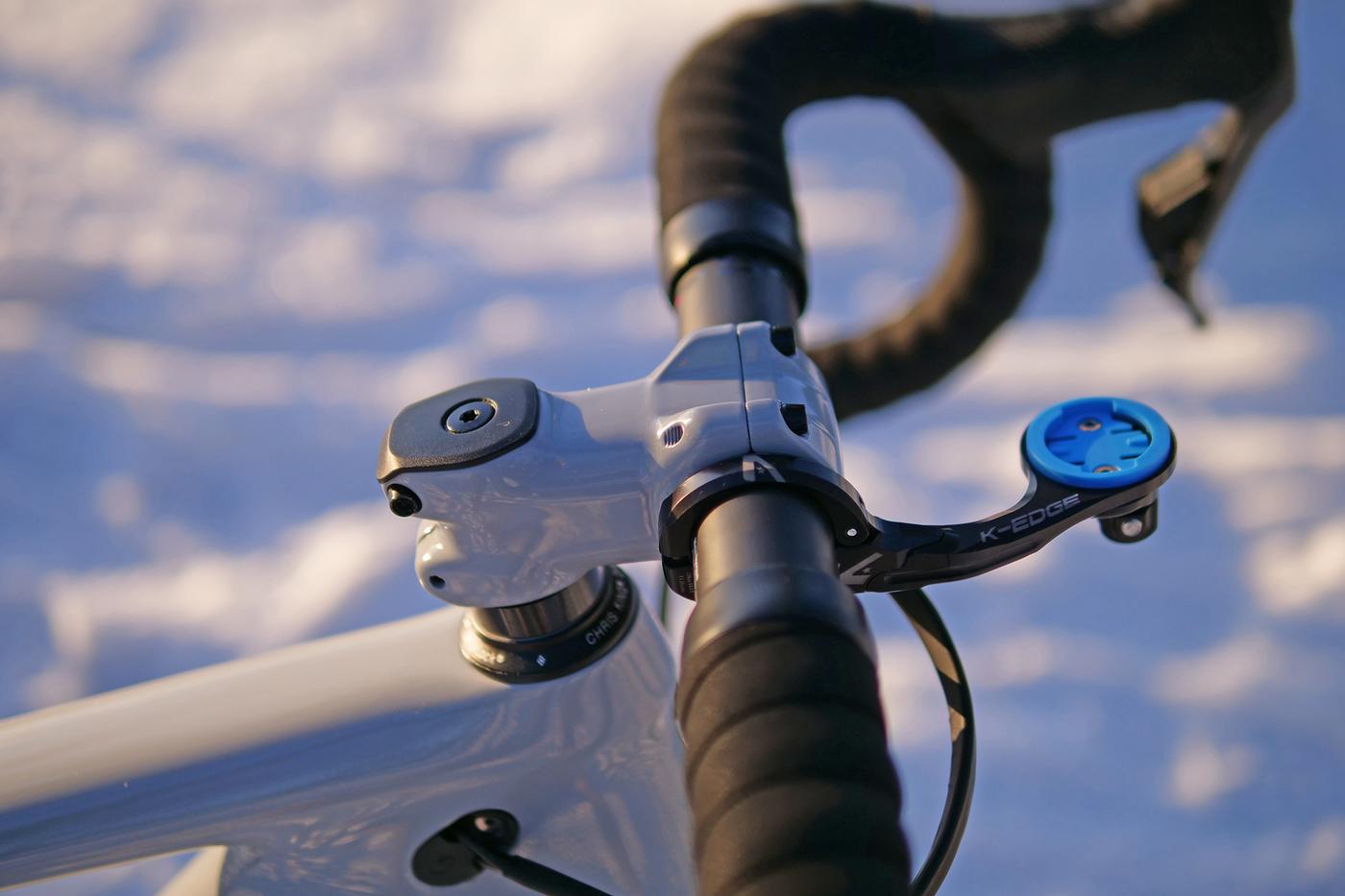 The build job after the respray was an absolute pig to do. The bike has got internally routed everything (even handlebars) and it’s such a fiddly, time consuming job to do that I nearly lost the will to live. I really concentrated on the details – everything has been heat-shrinked and heli-taped to within an inch of its life. Hopefully in the long term this will pay off and it will stay looking good for longer. 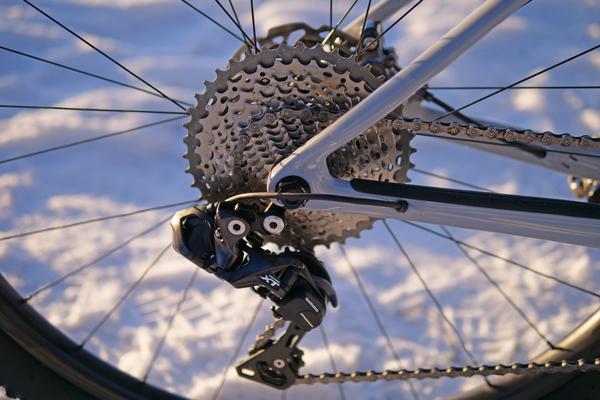 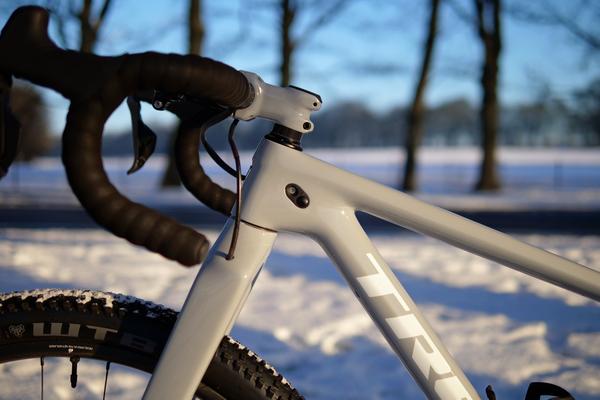 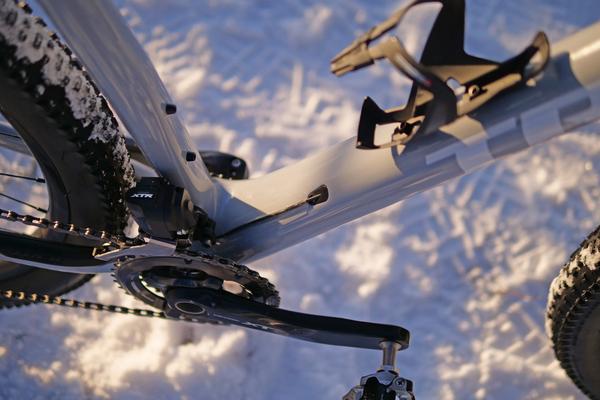 The final build comes is at 9.8kgs. That’s in the OK but not super-light category, but it includes my winter 2.25” tyres (filled with half a gallon of sealant) and is built to ride, not to be hung up on a wall looking pretty. I’m pretty light (less than 10stone/62kgs) so can get away with pushing the limits a little, so I run my tyres on 17psi/1.17bar and this has a huge impact on the ride quality – it’s takes the sting out of trail vibrations but gives tenacious grip levels on my local cambered/rooty/twisty trails.

The most critical thing for me is the ride feel – every single time I ride it I come back grinning. The mix of snappy acceleration, the stiff-yet-comfy quality of the IsoSpeed frame and the speed-grip balance of the big volume tyres seem to be the absolute sweet-spot. Although I’ve spent way too much time and money getting the Trek Monstercross where it is now, each ride reminds me that the effort was worth it and the fact that it looks as good as it does is the icing on the cake.