The Road to L'Eroica: An Italian Honeymoon

The Road to L’Eroica: An Italian Honeymoon
Words and photos by Ultra Romance

We had been running from winter… riding from winter… actually hike-a-biking away from winter in the Swiss Alps for nearly 2 weeks now.  Snow, wind, rain, and low UV indexes had driven us out of the most verdant and bucolic panoramas I’ve ever eyeballed. Away from the abrupt mountaintops that rise from the undulating valleys like the jagged teeth of a gnashing puma eagle.  My hair was damp and lifeless, and our bodies were craving the sunlight and ACTUAL early September weather (fair and pleasant for those of you who live in the Swiss tundra).  In a split second decision, while climbing out of a cold and empty valley after hiking down a roots rock reggae slip n’ slide, we hopped a train south to Europe’s fashion capital, Milano. It just felt natural.

Wheeling off the train in Milano felt like a homecoming. The bright lights of high fashion, including the unambiguously bombastic, yet at the same time relaxed, Italian lifestyle immediately put me at ease.  These were times of plenty, and I was eager to start my life as the Mario Cipollini of bicycle touring in a conducive environment for such an artistic concept.  However, the good life came at a cost, those 4000K ❤️ Swiss alp photos stopped rolling in by the hour, and we got to see litter for the first time since leaving the airport in Zurich.  I’ll take litter and no likes over the cold and wet any day… I mean, I lived in Austin, Texas for a few years. Ayo! Sorry, Austin. All that aside, there we were, living Under the Tuscan Sun like Diane Lane! 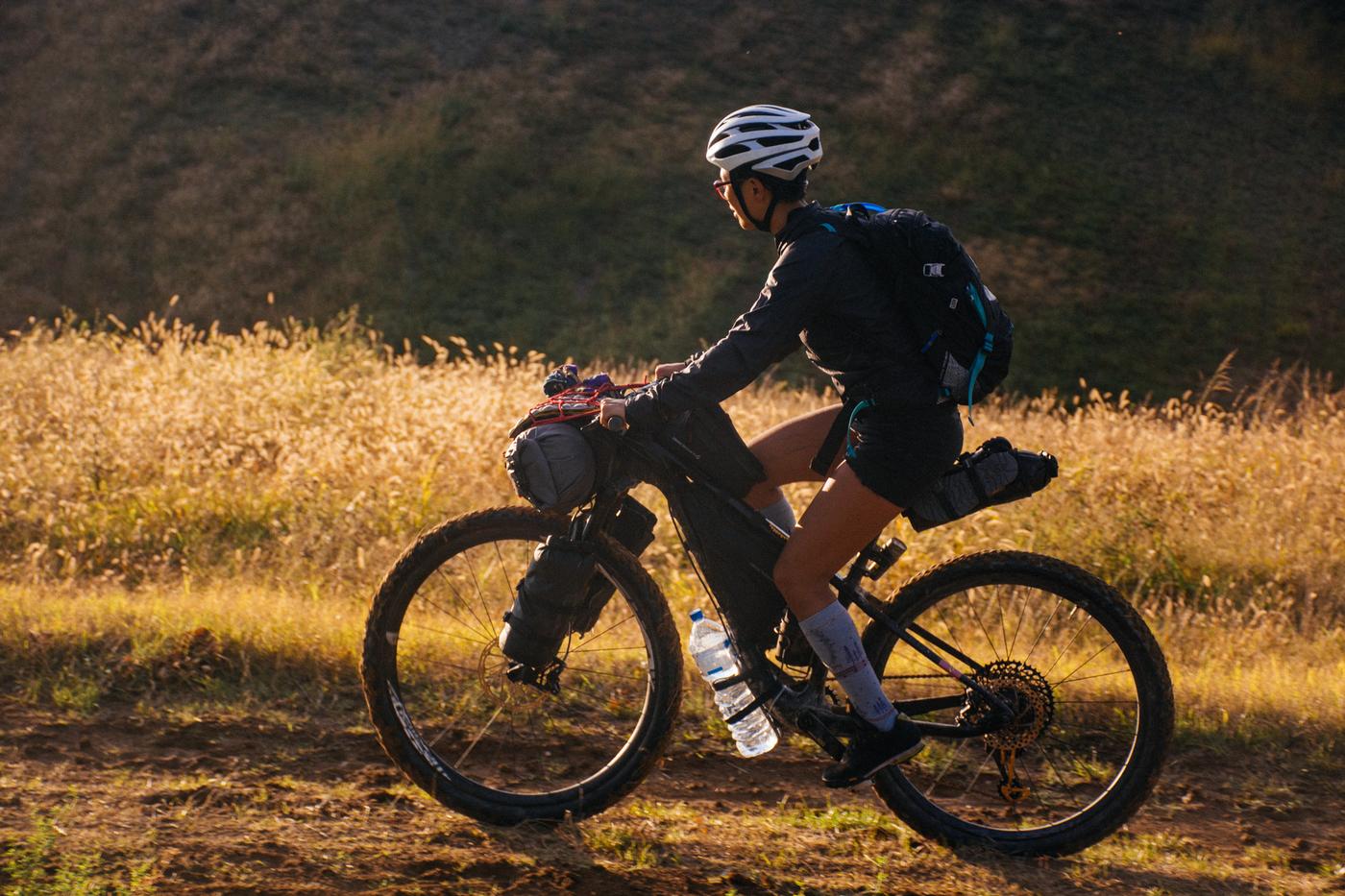 After a day of carbo-loading in the city, we set off south on the well-marked (after 1500 years it better be!) Via Francigena pilgrim route through the less than inspiring industrialized Po River Valley.  But again, the food was good and cheap, and the 1 euro espressos were keeping our minds awake.  After scoring some Italian weird spinach over a classic Italian lunch with a few internet friends turned real-life friend friends in a smallish agrarian alp foothill town, we began winding our way back into the mountains. 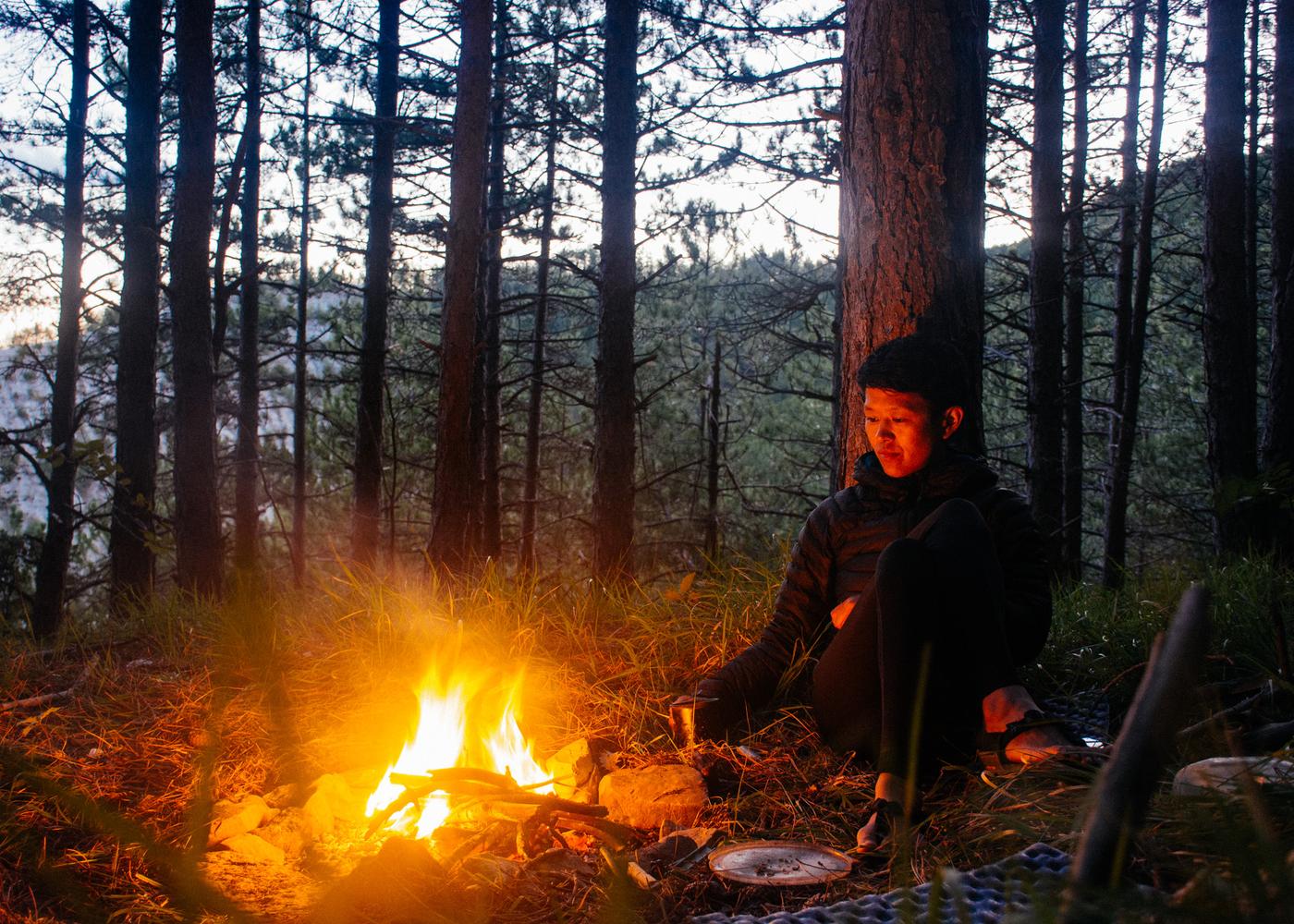 After a week of inclement weather and questionable routing, the dream was fading as we camped in a ditch outside Florence after waiting through a 5-hour Italian “siesta” for a grocery store that never opened while the elderly locals jested at us in Italian.  I think I was getting catcalled, but that’s understandable.  We had had a few mosquitos visit us throughout the night, and the ride ahead on the Tuscany Trail that we had been following was paved and through more industrialized zones.  I woke up sweaty as a sweat sock, cursing our lack of foresight in not bringing the bug net insert thinking we were just gonna be in frozen Switzerland this whole time.  Switzerland doesn’t have mosquitos, and if it did, they would not lower themselves to dine on American blood anyway. 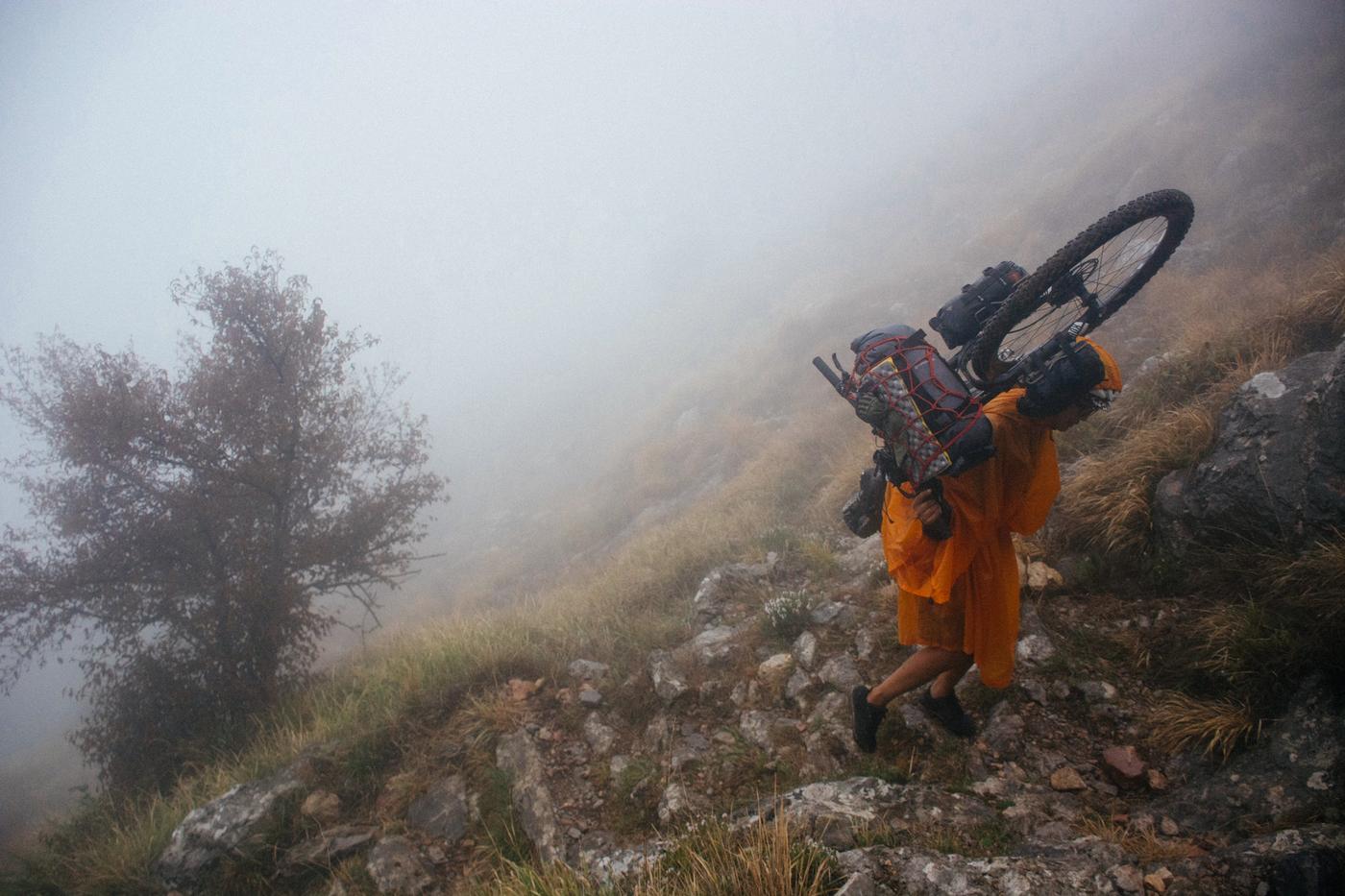 I check my 256gb iPhone 7+ (I’m getting an X as soon) and see a message from Bregan of Brooks England. He does the PR for L’Eroica and had noticed Namz and I were touring in the area.  He had the brilliant idea of inviting Namz and myself to attend L’Eroica as celebrity guest attendees (this guy knows his celebrities).  I told him I would cover the event for the Radavist, and we were then treated as if we were actually Jon Watson himself!  What fortunes! 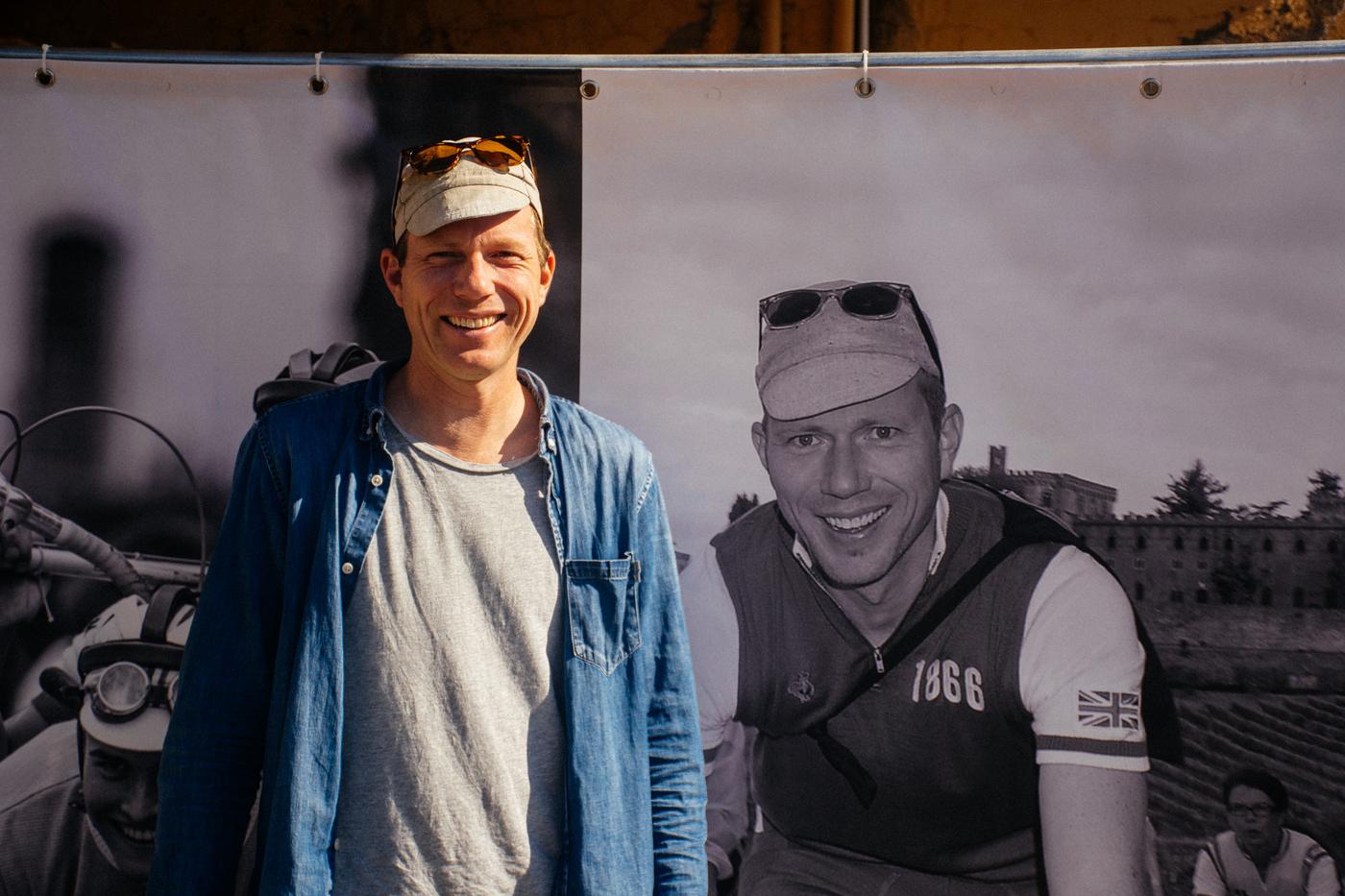 Ok, so Bregan is an incredibly nice guy, with a big smile and a cool calming demeanor.  And now that we have been associated with the National Geo-radavist, he put us up in a 1000-year-old monastery on top of a supremely picturesque and stereotypical Tuscan mountaintop overlooking the spanning vineyards in the valley below.  My 10-year-old dream of doing L’Eroica was now coming true and it was playing out like a romance novel… like it should.  A few bottles of dusty vino and naughty pasta binges later, we were down at L’Eroica ground zero in the charming village of Gaiole in Chianti, taking in a scene that I will not soon forget, if ever.

The Italian lifestyle is something that Namz and I had really come to appreciate by this point.  The focus on food, friends, and relaxation time to enjoy both.  Italians know how to live, and it was no surprise that they also know how to put together a cycling event.  Their passion for cycling is something that you will not encounter in many, if any other places, and when race culture is removed, what you are left with is a denatured illustrious historical reenactment of cycling’s golden age, fueled by fresh figs, cheese, espresso, cake, and wine.  Is that heaven?  Yes, yes it is. 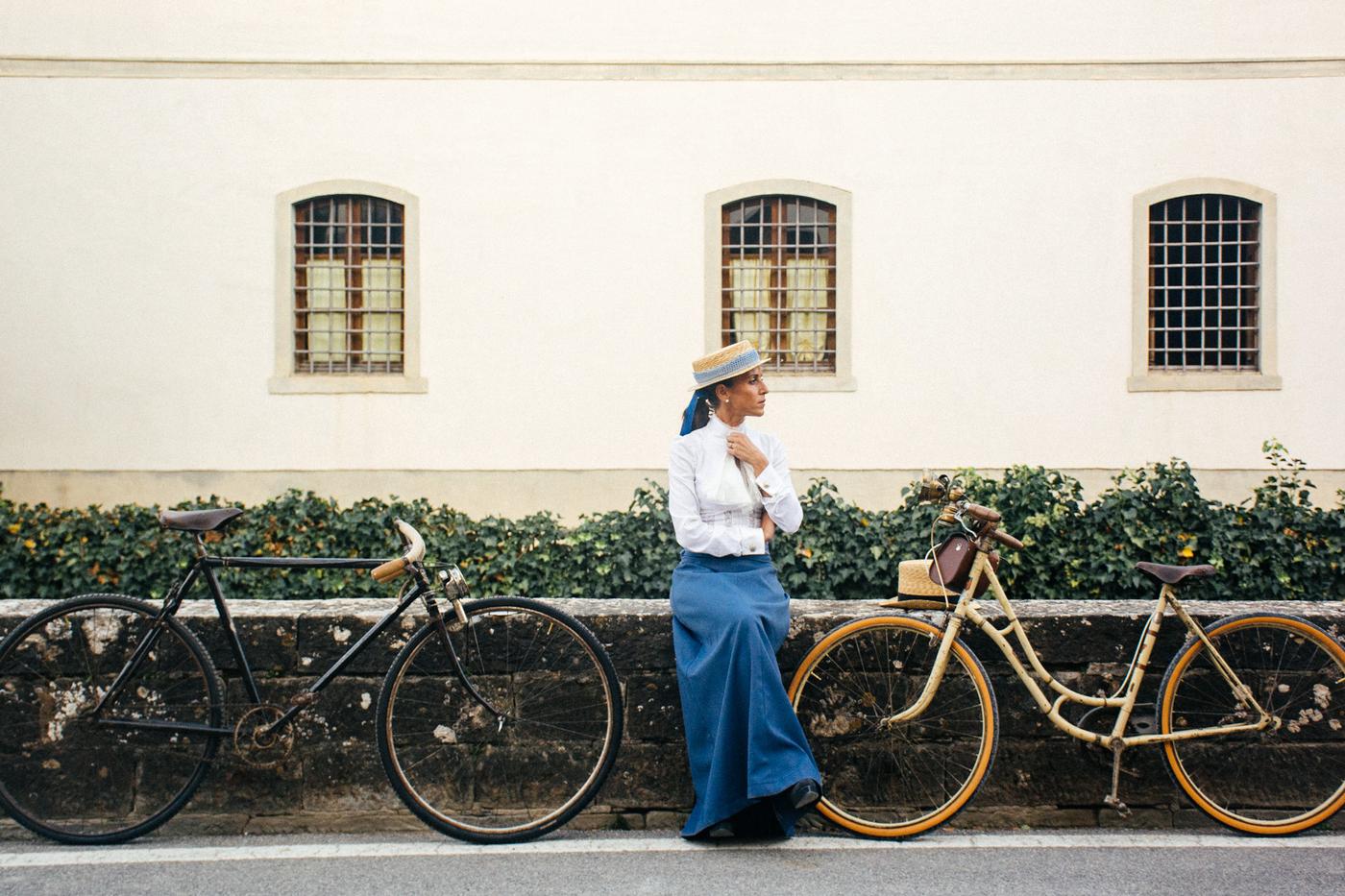 The event lasts 4 days and includes over 5,000 cyclists.  It was dizzying.  Seriously.  OVERLOAD… But the best kind of overload I’ve ever experienced.  The flea market alone made my ears leak dopamine out of my brain.  Might never recover, but that’s OK.  I mean, 6 sets of NOS campy delta brakes in one place???!!!  Stuff like that.  After the initial antique roadshow shock subsided, replaced with more red wine and ravioli, I became enamored with the characters who were selling these romantic relics.  They had presumably lived good lives, hoarding memorabilia representing a simpler age of cycling, albeit, the world at large.  This is what L’Eroica represents and the authenticity was present in rusty abundance.  It’s a good thing few Italians are over 6 ft tall, otherwise I woulda had to hire a private Concorde to fly my bounty back across the Atlantic to my mom’s Connecticut garage. 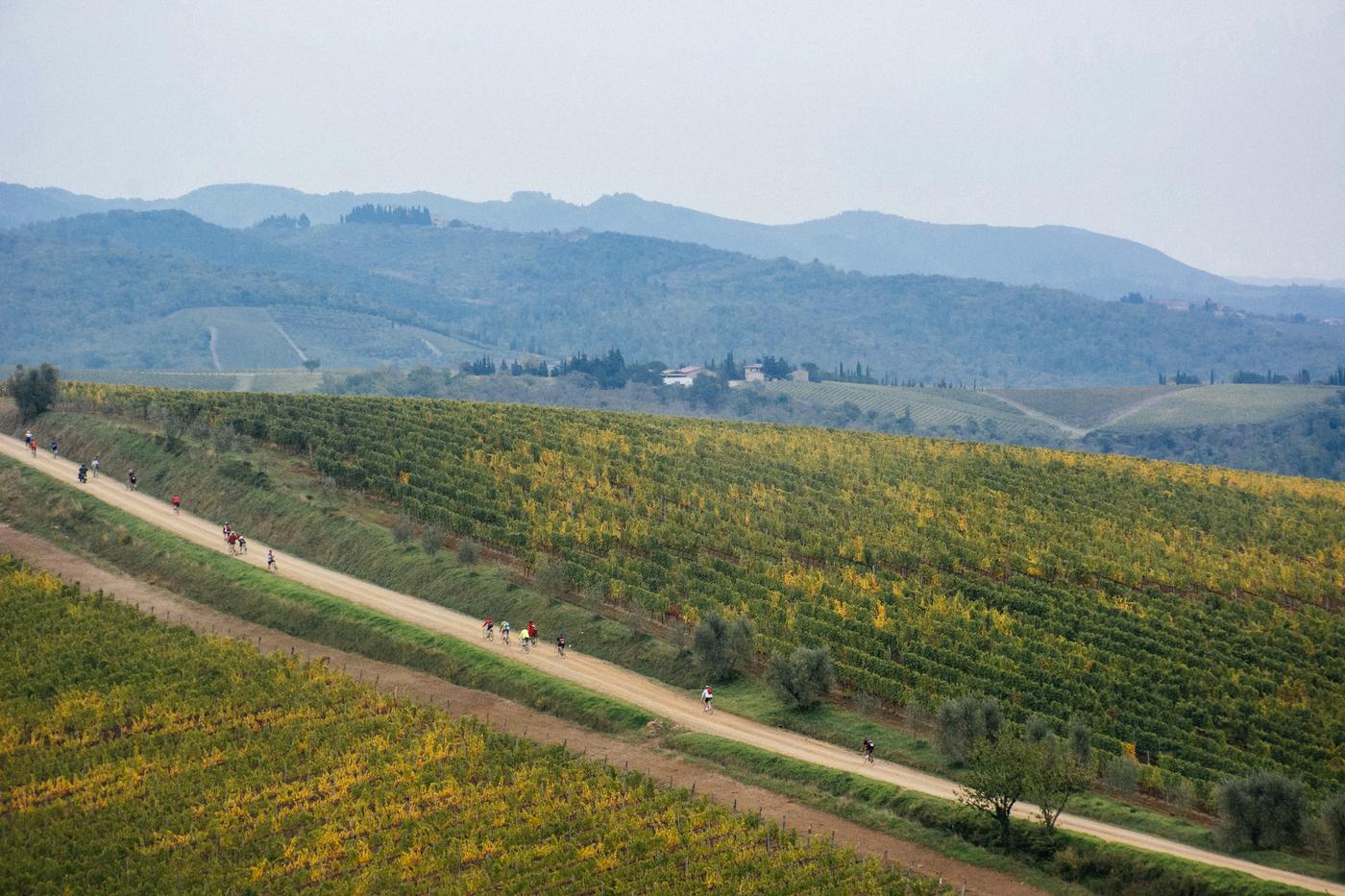 We rented some bikes to ride that fit the vintage criteria enforced at the starting line for every bicycle involved in the event.  Katarina with Brooks England had set all this up for Namz and me, along with a group of German fashion magazine journalists (I’ve never felt more at home).  We looked fabulous with our matching wool Brooks kits and silk scarves, and all of us decided on the easiest of the 3 ride options.  I’ve gotten to where I am by consistently taking the easiest path whenever given the choice; I was not about to stop now.  Again it was a good choice.  The ride was a pleasant cruise through the Tuscan countryside, cloaked in a cloud of mythical white strada bianca dust revealing riders dressed to the 9’s in some of the most handsome cycling outfits I’ve ever seen.  The vibe was as Italian as Valentino Clemente Ludovico Garavani’s Tan, and I was as grateful as I’ve ever been to be there pedaling through the middle of it all, my 10-12 chest hairs whipping in the wind. 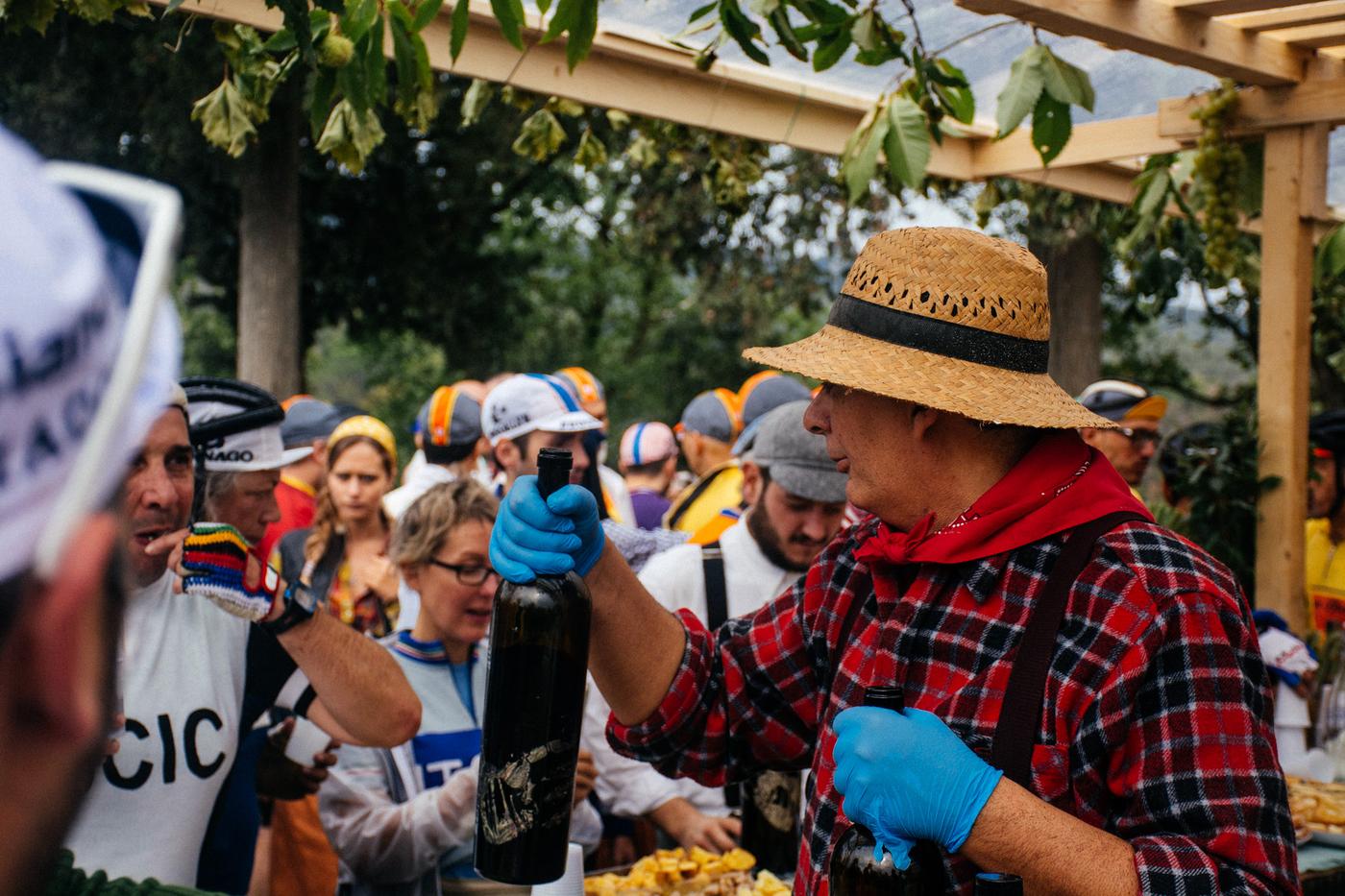 The lack of integrated shifting, clipless shoes, helmets, lycra, disc brakes, etc. made for a remarkably surreal visual time capsule harkening back to when the modern eyesores of our beloved sport and lifestyle were just a glimmer in the eye of the guy who invented Cervelo etc.  The pace of the ride was full of smoke and wine brakes, picnics, and immaculately dressed 75-90 year olds attempting to fix their finicky 100-year-old bikes every 50 feet.  Midway through we stopped for 3 hours at the aid station, bursting with cyclists devouring homemade cakes, pies, cheese, and… you guessed it… more wine.  These were times of plenty indeed! 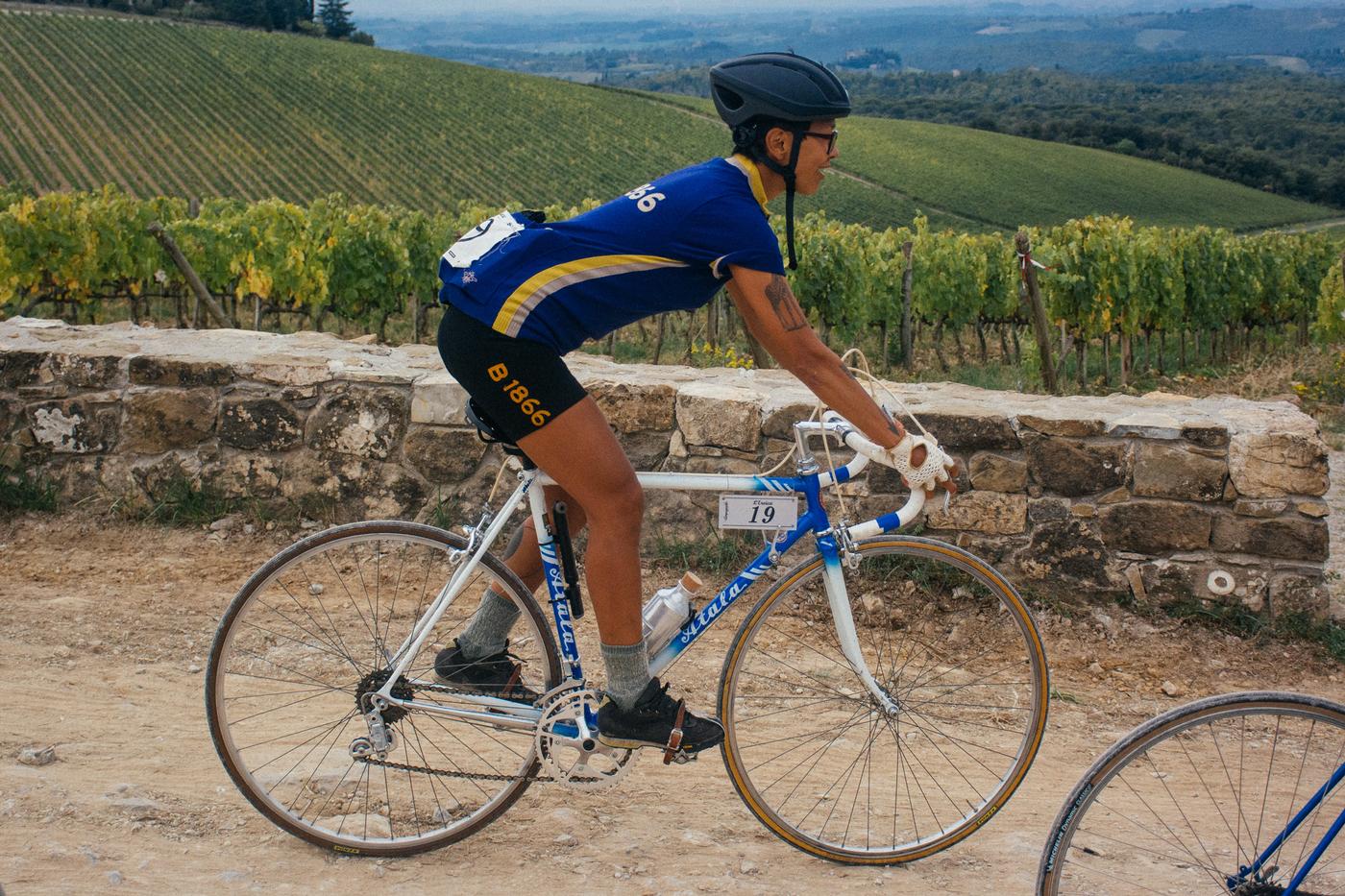 The following day, Namz and I bid our new fashion magazine friends a farewell over breakfast at the monastery and headed off back on our touring bikes absolutely in awe of the accidental honeymoon we had just experienced.  L’Eroica exceeded my every expectation, and I can’t recommend the pilgrimage enough (not the Via Francigena one).  This event IMO represents the very essence of cycling and cycling culture, all backdropped by the rolling vineyards and olive groves of a popular rom-com destination.  We left full of inspiration and satisfaction, smile muscles sore and fatigued, in need of my monthly botox injections.  Abs covered in a layer of bread and pasta, in need of airbrushing for the next month or so… all worth it.  I’ll be back again next year and every year after!