This is Melina’s first bikepacking trip. She’s been on a couple of road tours and knows how to turn a set of cranks. That said, off-road has never been her thing. In fact she can’t remember the last time she threw her leg over a mountain bike. She’s headed off to graduate school soon, and I want her to be hooked on bikepacking before she leaves. So this needs to be awesome. Naturally, I’ve turned to southern New Mexico and the venerable Monumental Loop.

Although the entire loop is over 300 miles, it can be broken into sections, and we’ll be riding the leg from Hatch back to Las Cruces. The majority will be over tame ranching roads and double track. At 50 miles, it’ll be a modest overnighter, but we’ll still have to deal with the White Gap一a 1200 ft ascent composed of chunky volcanic baby heads. To top it off, we’re forecast for 30 mph winds, with highs in the mid-50’s. Not the pleasant desert riding I was hoping for, but sometimes you just have to go. We’re dropped off outside Hatch on a nondescript dirt road一a dairy farm on one side and a solar farm on the other. The initial riding is relaxed. It’s slightly uphill, just enough to warm us up and offset the cool winds whipping around us. We chat about school and politics and the dry desert vegetation. It’s relaxing to ride side by side, carefree. We soon come to an abandoned ranch house that’s assembled from the volcanic rocks, similar to the ones we’ve been riding over. Though beyond repair, it’s still charming and must have been someone’s pride and joy. The clouds overhead look ominous, and we see what appear to be snow flurries in the distant mountains. Maybe we should have dressed warmer.

For now, however, the valley is providing some protection from the wind, and occasionally the sun comes out to warm our backs. We continue on past small herds of cattle—young calves peering curiously at us while their mothers cast nervous looks—and we’re gradually funnelled up the valley floor toward the White Gap. As the pitch increases, so does the density of desert fauna as well as the looseness of the pink, chalky rock. The final ascent looks worse than it is: a clearly cut traverse lined with yucca for guard rails. We hike-a-bike for a while,complaining every now and then, but it’s over quickly. The winds at the gap are forcefully howling and occasional gusts of snowflakes fly-by. The descent is a near copy of the way up but with more rocks, somehow. We ride for a bit, bouncing over the carpet of stones, and walk when it gets steeper. We’re in no hurry. At the bottom we pull out the camp chairs for a relaxing lunch and the sun comes out to warm our bones. We chat about Melina’s upcoming decisions regarding graduate school and life in general. I don’t have any great advice, but she’s always been good at figuring out life anyway.

I thought the White Gap would be the last of the gnar, but I was off by a few miles. I already have a reputation with my wife and kids for downplaying the difficulty of most outdoor excursions. This isn’t helping. We push and ride up another small canyon and top-out at a gravel road. What ensues is a wild and joyful descent. We yell at the driving wind which threatens to push us off the road and we eventually run-out, miles later, on a rolling stretch of gravel. 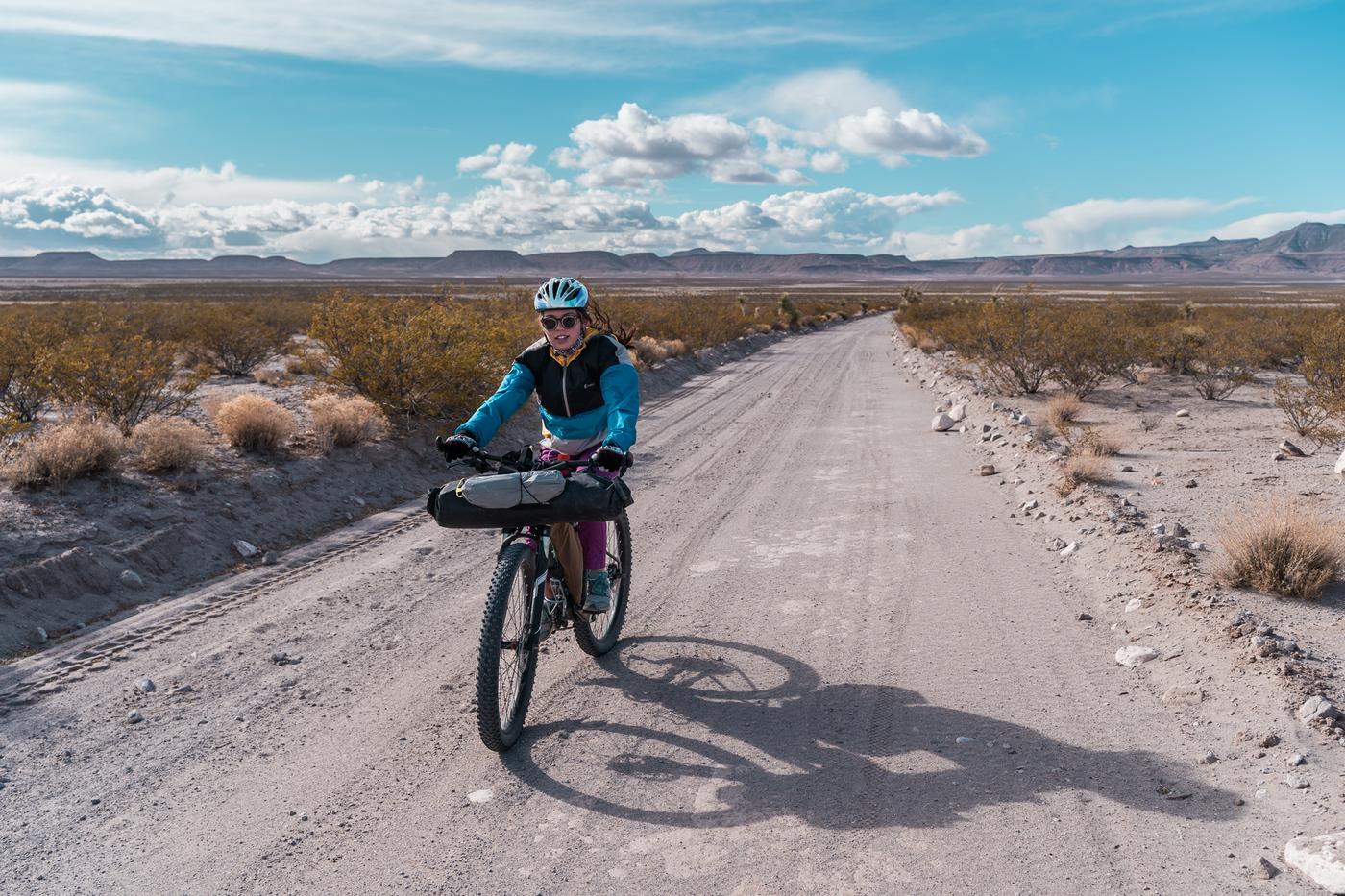 Out on the plains, now, there will be no further respite from the wind. It’s constant. It harangues us. Como friega! After a few miles we jump onto a sandy dirt road and push directly into the wind for about 30 minutes. Eventually we stop for another break and hunker down by some yucca. It doesn’t help much. The clouds cover the sun most of the time, and the temperature feels like it’s dropping. Distant rays of sunlight illuminate giant clouds of dust, billowing across the plains of chaparral. The sight of it is both wonderful and eerie.

The rest of the afternoon is a blur. We traverse miles of the same sandy road, passing the occasional water tank and abandoned ranching equipment. The foul, green water in the tanks would need serious treatment before consumption. But, thanks to the cool weather, we still have plenty left in our bladders.

The afternoon gets late and we agree to keep riding at a leisurely pace. Melina is starting to feel sore, but, as always, she’s a trooper. Her previous life as a ballerina taught her to block-out discomfort when needed. As a parent, I still wonder if that’s good.

We’d like to find a camping spot with a good view of the Organ Mountains. Even more, we hope for something out of the wind. We settle on the first, but the second is unattainable. We set up the tent and soak in the spectacular views of the Organs turning various shades of purple, blue, and orange as the sun dips below the horizon. The blustery weather has brought clouds that enhance the drama. It’s a fine evening. 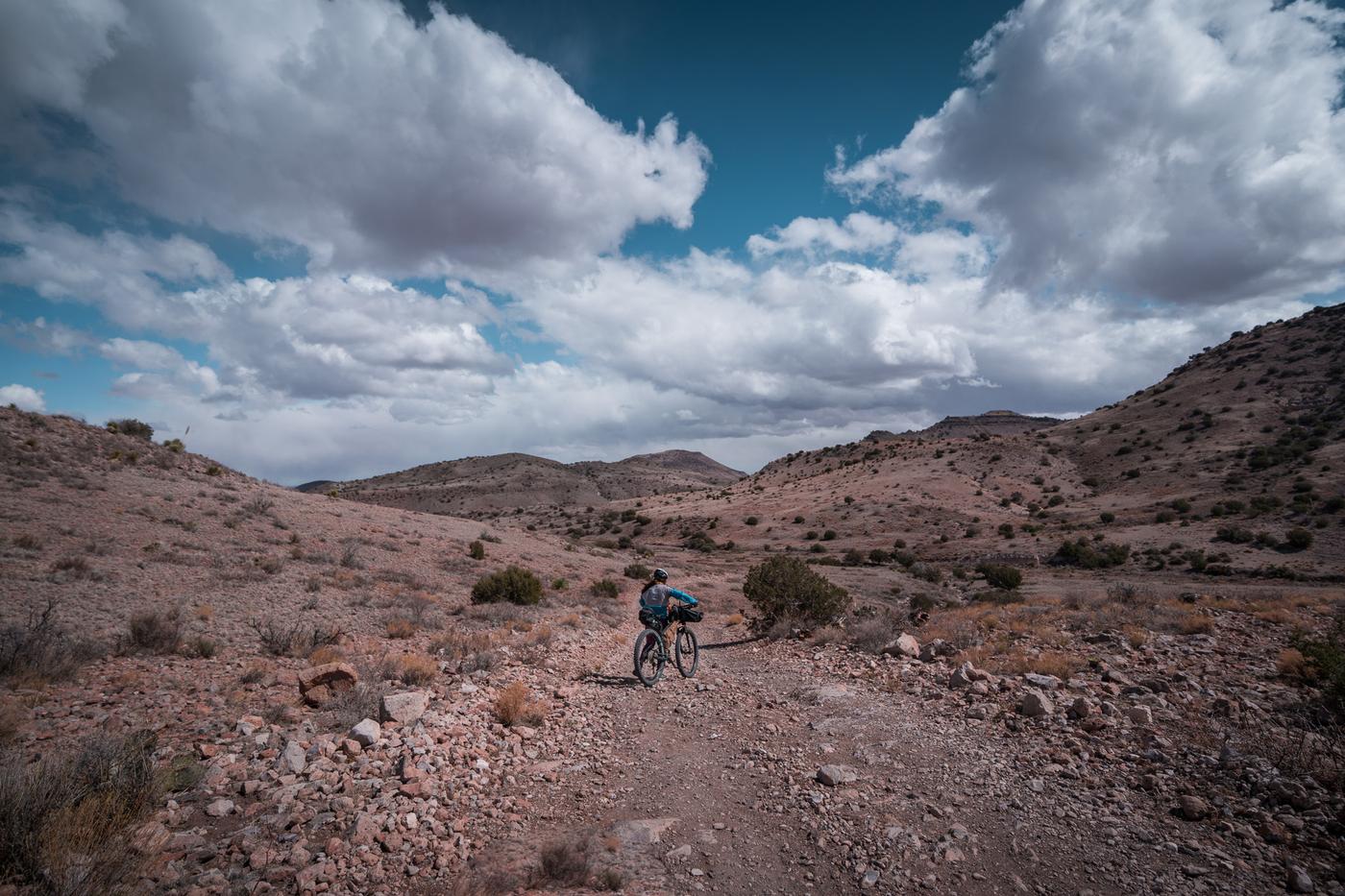 We settle into the tent, which we’ve been careful to stake out firmly, and at last we’re out of the wind. I carefully boil water under the vestibule and we listen to a podcast about the black death while eating ramen. We chat for a while, then drift off to sleep. The wind had died out a bit, but at some point in the early morning, it comes back with a vengeance. The fly is whipped about— a loud flapping that makes for a lovely alarm clock—and the poles threaten to buckle with repeated blasts. But the stakes, lines, and 10D silnylon all hold together to my amazement. (Note to reader: If you’ve never practiced guying-out your tent, do it.) 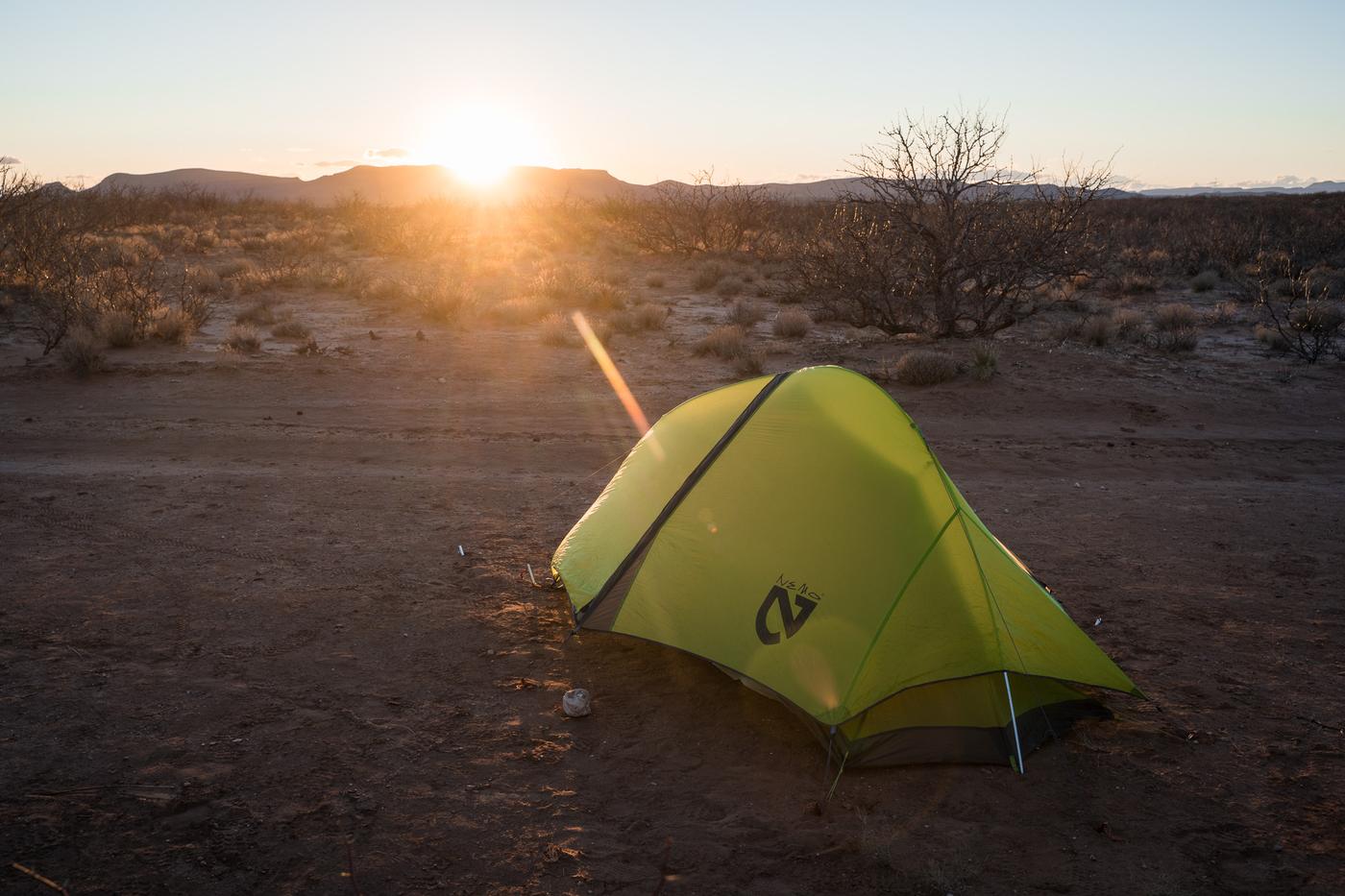 At the first hint of light, we’re done being cooped-up in the tent. We go out for a short jog to warm up and start packing. It’s 15 miles back to Las Cruces, and we’re already thinking about where to stop for breakfast. We snap some photos of the sunrise and head out. The weather somehow manages to be worse than the day before, and I’m wishing I had my warm riding gloves. While I’m sure Melina’s soreness is still there, she doesn’t say anything. The riding is mostly downhill and downwind and before we know it, we’re in the residential outskirts of Las Cruces, near Picacho peak.

Once off the hillside, we trace our way through a maze of gravel roads alongside irrigation ditches. We’re in semi-rural farmlands with pecan orchards and fields whose crops haven’t yet been planted. We cross a bridge over the Rio Grande, which is a mere trickle, and soon we’re at The Bean, a cafe and hang-out spot for local cyclists. A group of older cyclists seated nearby chats with us about the trip. The rest of our family arrives and we have breakfast while sharing our experiences. 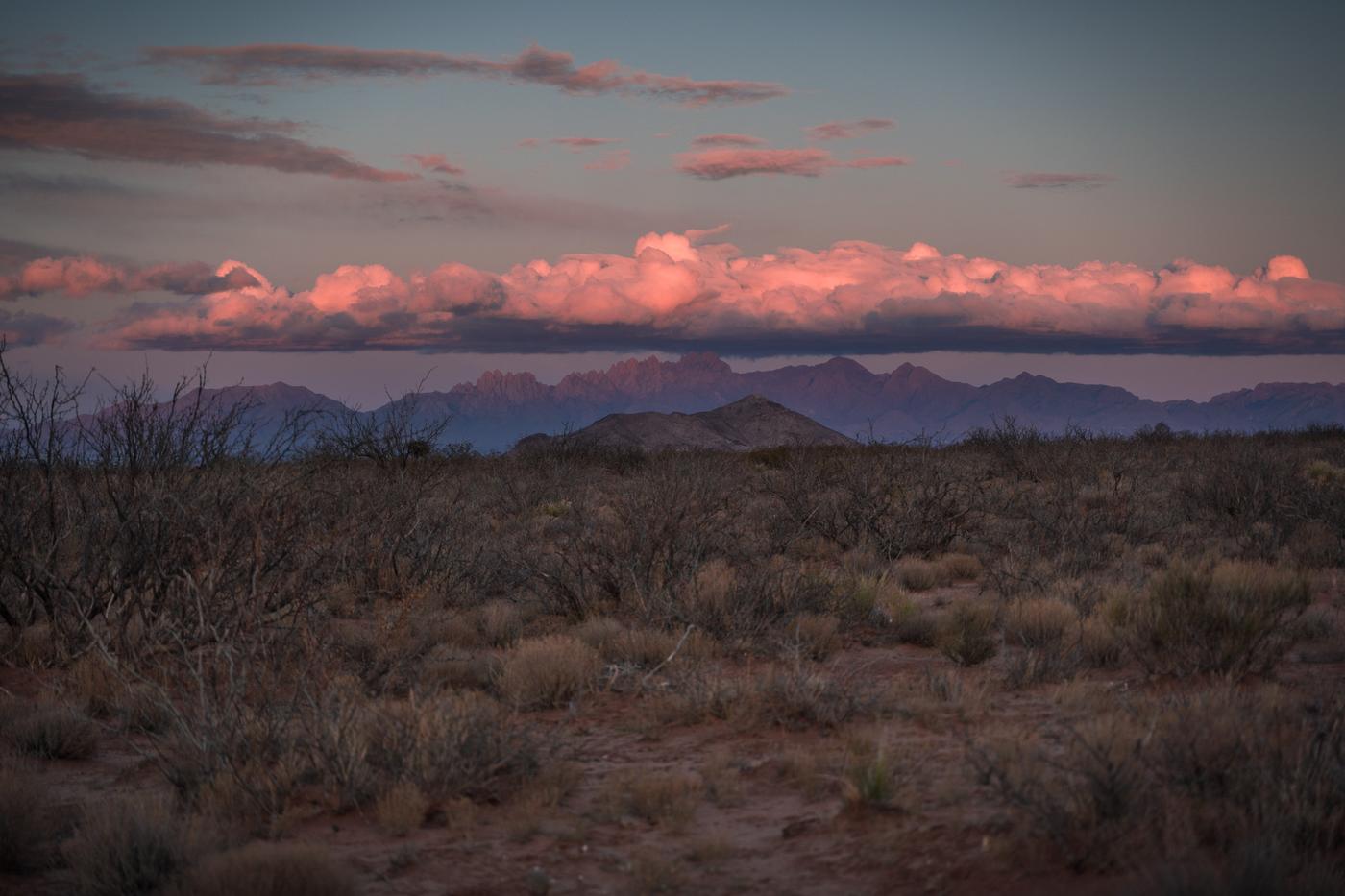 At barely more than 24 hours, this trip wasn’t epic in duration or distance. The conversation was pleasant, but we didn’t reach any major insights. I’m not sure Melina is hooked on bikepacking (yet), but I know this won’t be our last trip. And somehow I know that many years from now we’ll still remember and talk about this particular 24-hour slice of our lives.

I recently did a similar ride with Paulina, my younger daughter, and we were assailed by a full-on blizzard. My luck with weather on the Monumental Loop hasn’t been great, but my experiences with my daughters have far outweighed the discomforts of the desert . The Loop is championed by local rider Matt Mason who co-created it with Pablo Lopez a few years ago. He actively promotes it through various social media outlets, provides customized advice to potential riders, and constantly updates the route and trail conditions. Recently he made a major revision to the route, adding more opportunities for dining and resupply while also making it more accessible to the average rider (more mellow). Thanks for your continued efforts Matt. This venue has provided invaluable opportunities for me to spend time with my family. Here’s what Melina had to say about this experience:

“I loved getting to spend my weekend riding this beautiful stretch of the monumental loop. I tend to focus a lot of my time on work and school, and especially now that I’m preparing to go to law school in a big city, it’s been magical getting to soak in my final months of living in southern New Mexico. I feel very fortunate to have a family that makes the effort to get involved in various outdoor activities, and I think bike-packing may just be my new favorite!”

The Monumental Loop 2.0 is now live on RideWithGPS. This route includes some bypasses and omits a few bits of desert treachery. Survey says this updated route has more tacos, too!