“We have four kilometers to go with six hundred meters of climbing.” “Well, we can always walk.”

Self-named French “Team Tourist” is sitting cross-legged on a patch of gravel. Regardless of the weather or terrain, Mathias, Sophie, and Elise are smiling and calm, ready to take on anything.

Rue finds a tick behind her knee and Sophie lends us a tiny pair of plastic pliers to get it out. Then, she gives them to us as a gift.

“My hope is that we’ll all regroup here.”

“Okay. Well, that sounds like a good plan. How much is it? Okay. That’ll work.”

It’s day one and Sami is onto her second e-bike of the trip. She burned through the first one near Samoëns. She’s getting ahead and shooting from behind to make a video about our trip. E-bikes are incredible tools for media projects. Ali, the local expert, took her to a bike shop there to see if they could get a new battery and they said for some reason, it was so fried it wouldn’t charge. Instead, she’ll rent a new one with bigger tires, more suspension, and better brakes. With one camera enclosed in a scuba diving protective case, another strapped to a carabiner on her waist, a full backpack, and a drone in her hip pack, she looks like Lara Croft. On the new rig, she’s ready to rip. 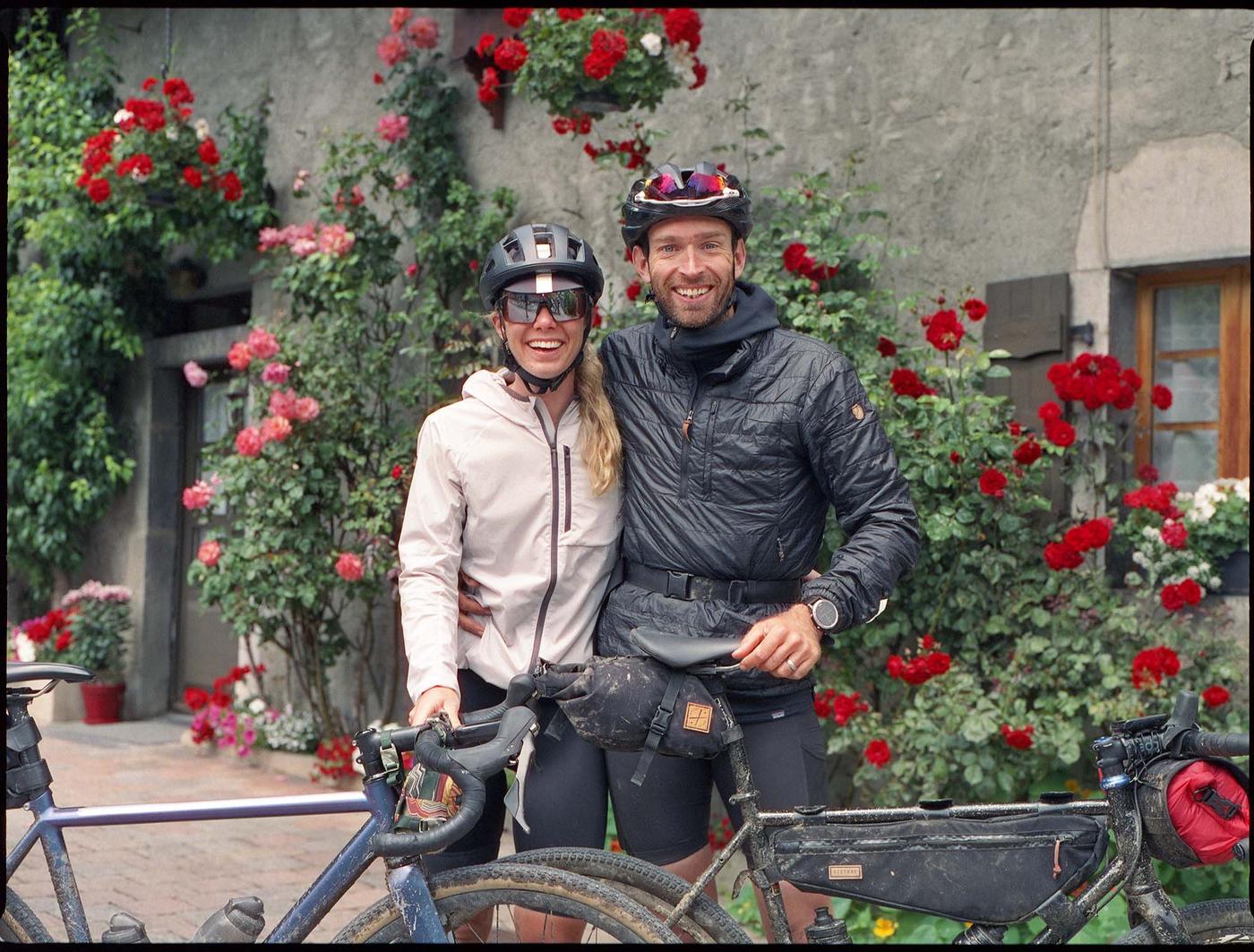 This time it’s her husband, Ben. He’s with Maxime and Seb. Maxime got a puncture on the rocky descent from lunch. Ben and Seb stayed behind to help him fix it. They’re on their way up.

Sure enough, Ben and his crew arrive in minutes, shirts soaked and sweat dripping from their helmets.

Moments later, Sami and Ali make it– the wind blowing through Sami’s hair on her whip. I don’t think Ali has ever in her life broken a sweat. Though tiny and unassuming, she’s a natural killer.

With the wave of a hand, Gaby has gotten us all back together and on schedule. Somehow it’s not even raining, but the sky does look dark.

A few months ago, Gaby and I talked about getting together for an overnight, if Rue and I could make it to Europe. I saw an opportunity for us to ride with her and Ben in the French Alps a week after finishing the Hope 1000 in Switzerland. We set the dates and Gaby made the route. 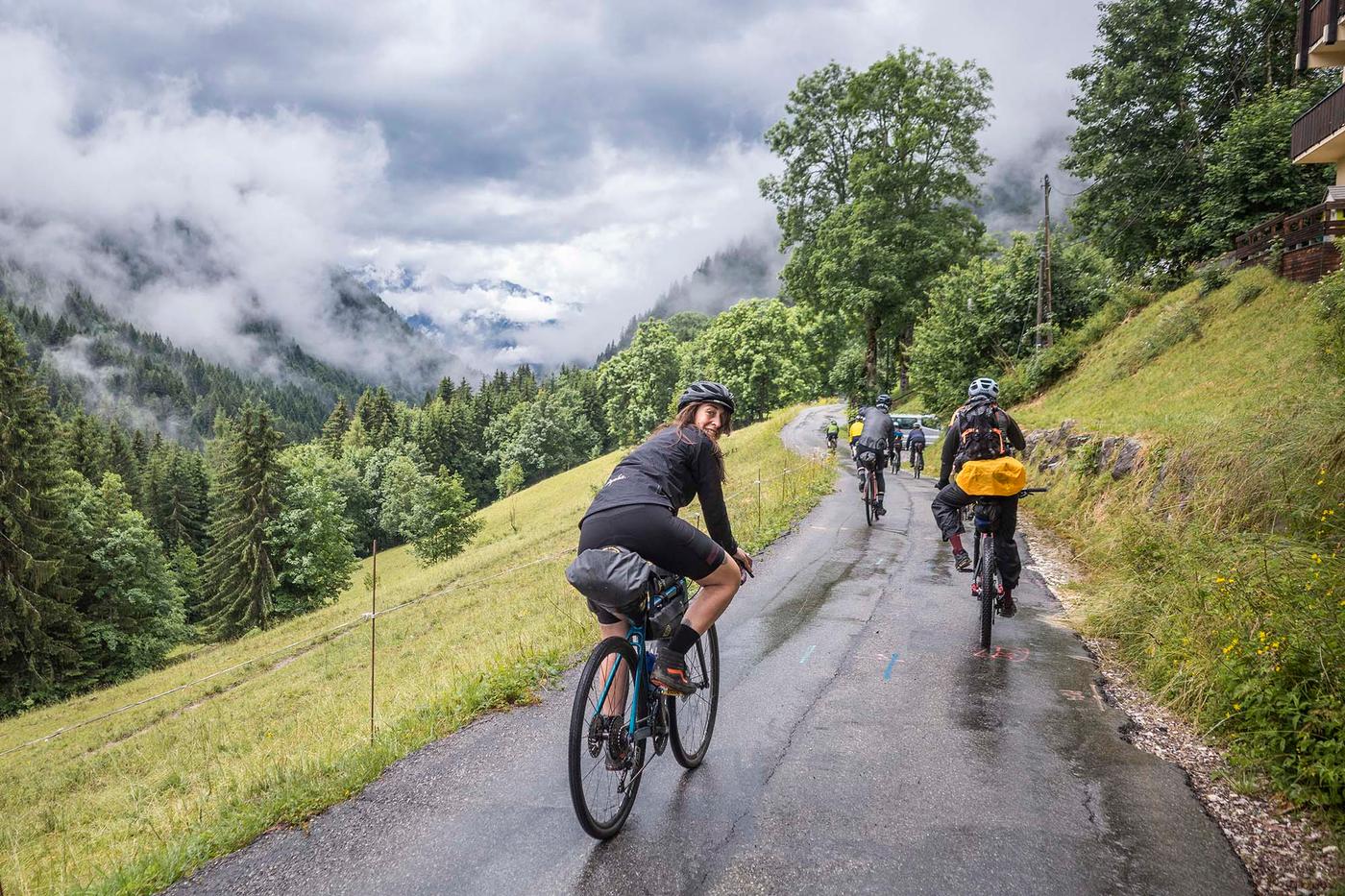 While talking about the ride with friends, the group grew. By the weekend, there are eleven of us: 5 French, 3 Brits, Sami the Spaniard, and Rue and I are the two Americans– although, Rue could also count as a Lithuanian.

We set out this morning from our cabin in Saint-Jean d’Aulps on gravel bikes, headed for the Bostan Refuge, a mountain hut 1,000 meters higher in the French Alps.

We’ve taken shelter from a thunderstorm at a cafe in Les Gets where the ladies brought us espresso and cake. The storms passed in time for our picnic lunch at the buvette of local cheese and charcuterie plates and Tarte aux Myrtilles, French blueberry pie. Back on the bikes, Maxime got a flat, and Sami killed her e-bike and both got rolling again within the hour. Riding in France feels like a fairytale, maybe even more so in the Alps. 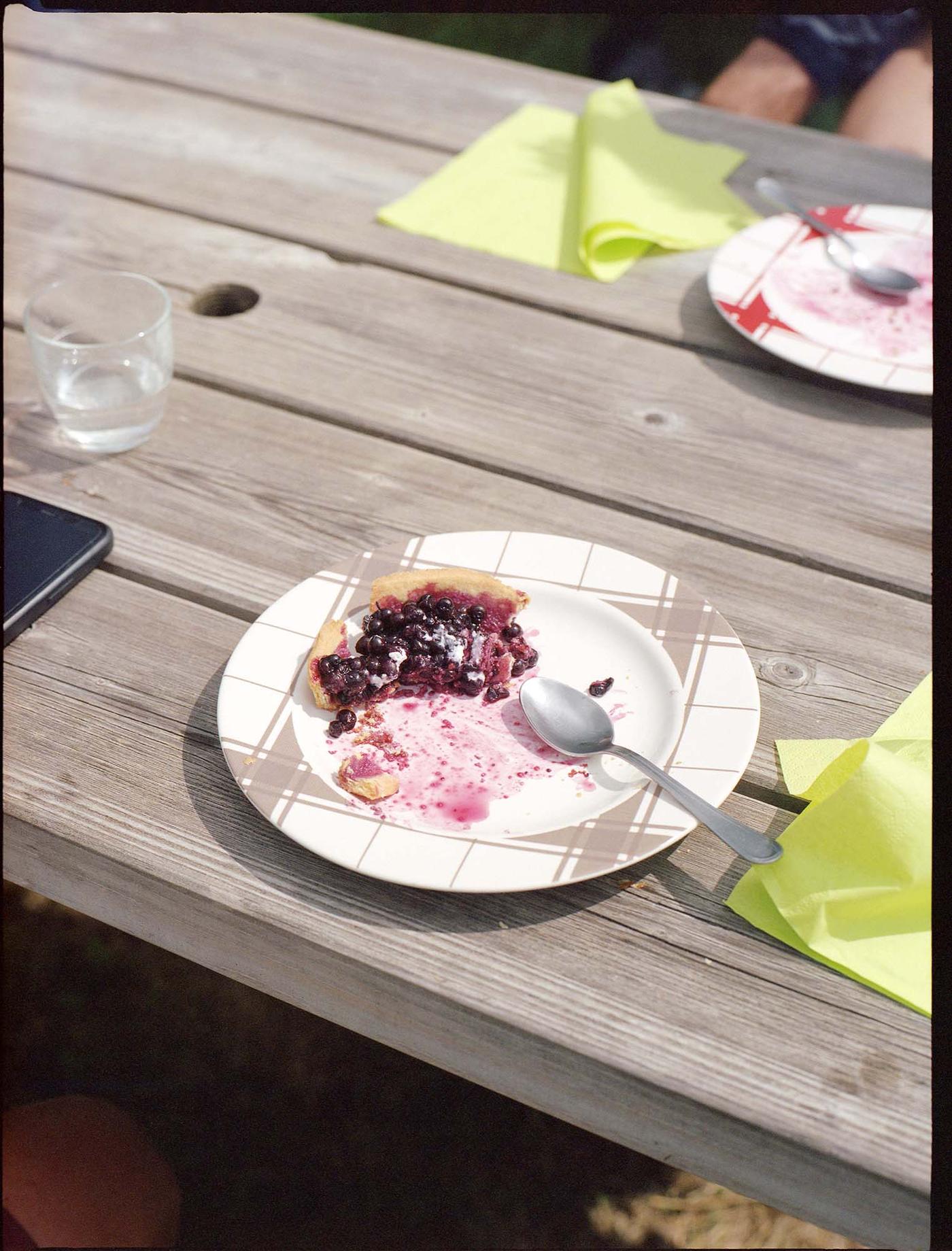 We all point our bikes up towards the Refuge and get back in the saddle. The game here is to stay on as long as possible until the steepness forces you off. It’s a battle of legs and lungs. It’s so green. I’m not sure if I’ve ever ridden a harder four kilometers. I’m leapfrogging with Ben who definitely has a stronger motor than me, but is beyond kind and encouraging. Seb is crushing us both but waits at turns, I think just to have a bit of company. I haven’t seen anything he can’t ride. I’ve heard he’s an “alpine gravel” enthusiast. I think this means he’ll ride a gravel bike on downhill trails.

I check my Wahoo.

And then I remember that we’ve only covered two so far. I’m breathing like a train. 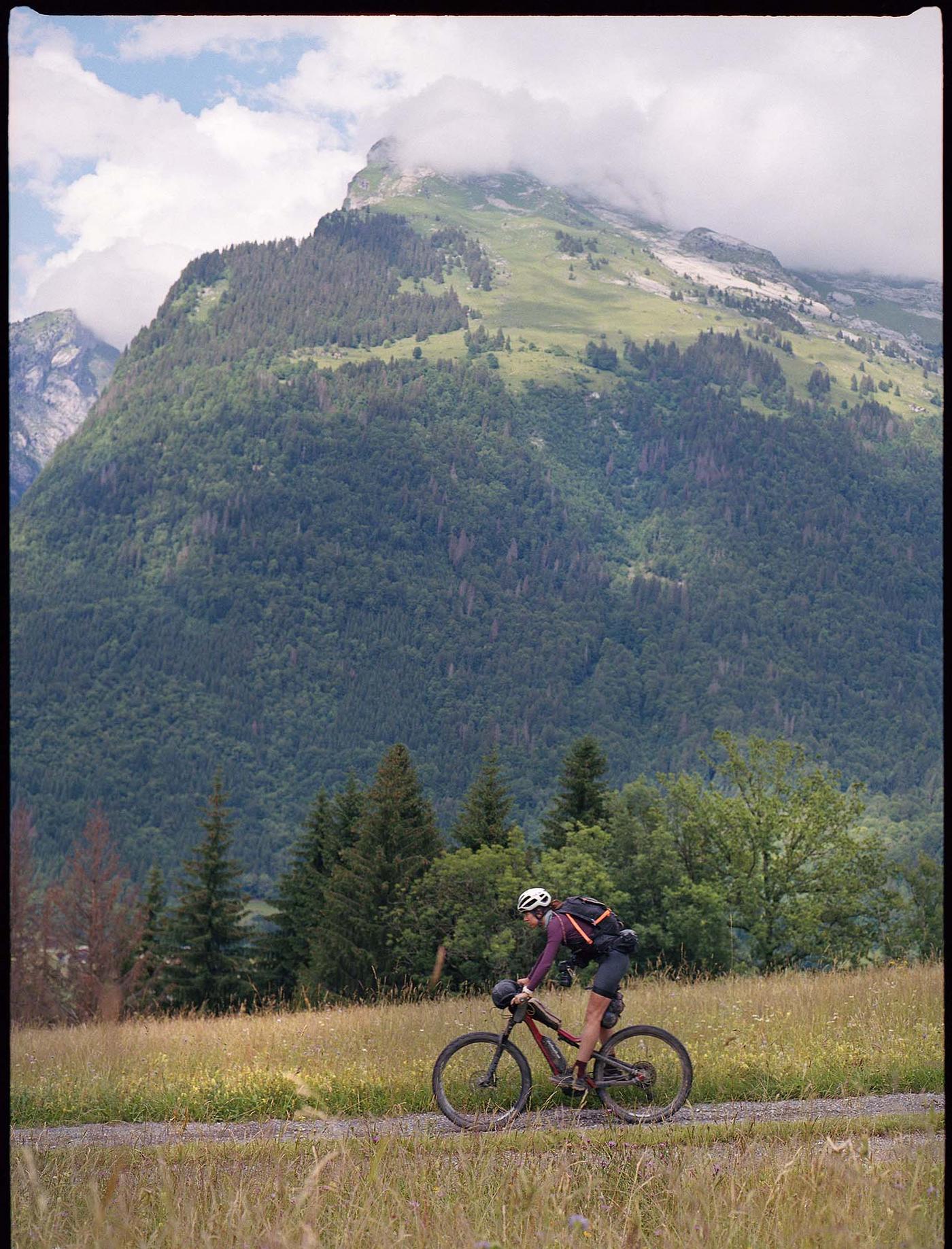 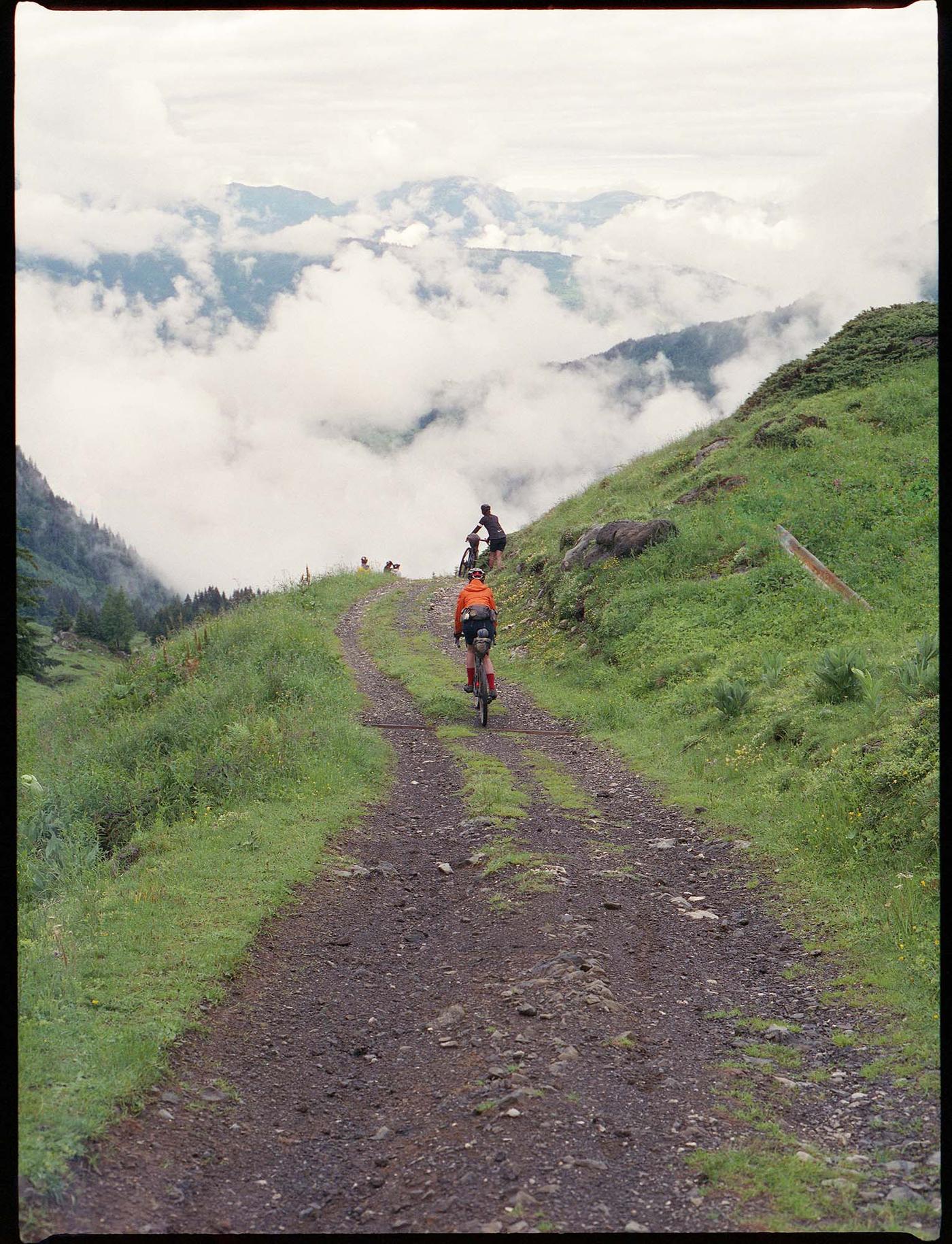 We ride through mist and clouds, past cows with bells. It’s the kind of rocky road with a grass patch in between two stony tracks.

We make it to the hut. It’s misting rain by now and I’m losing body heat quickly. We roll the bikes undercover and go inside. It’s really warm and totally empty apart from the two young guys running it. I take off my wet bike shoes and socks, change into sandals and go back out down the road to find Rue.

She’s ridden and walked up with Sophie. 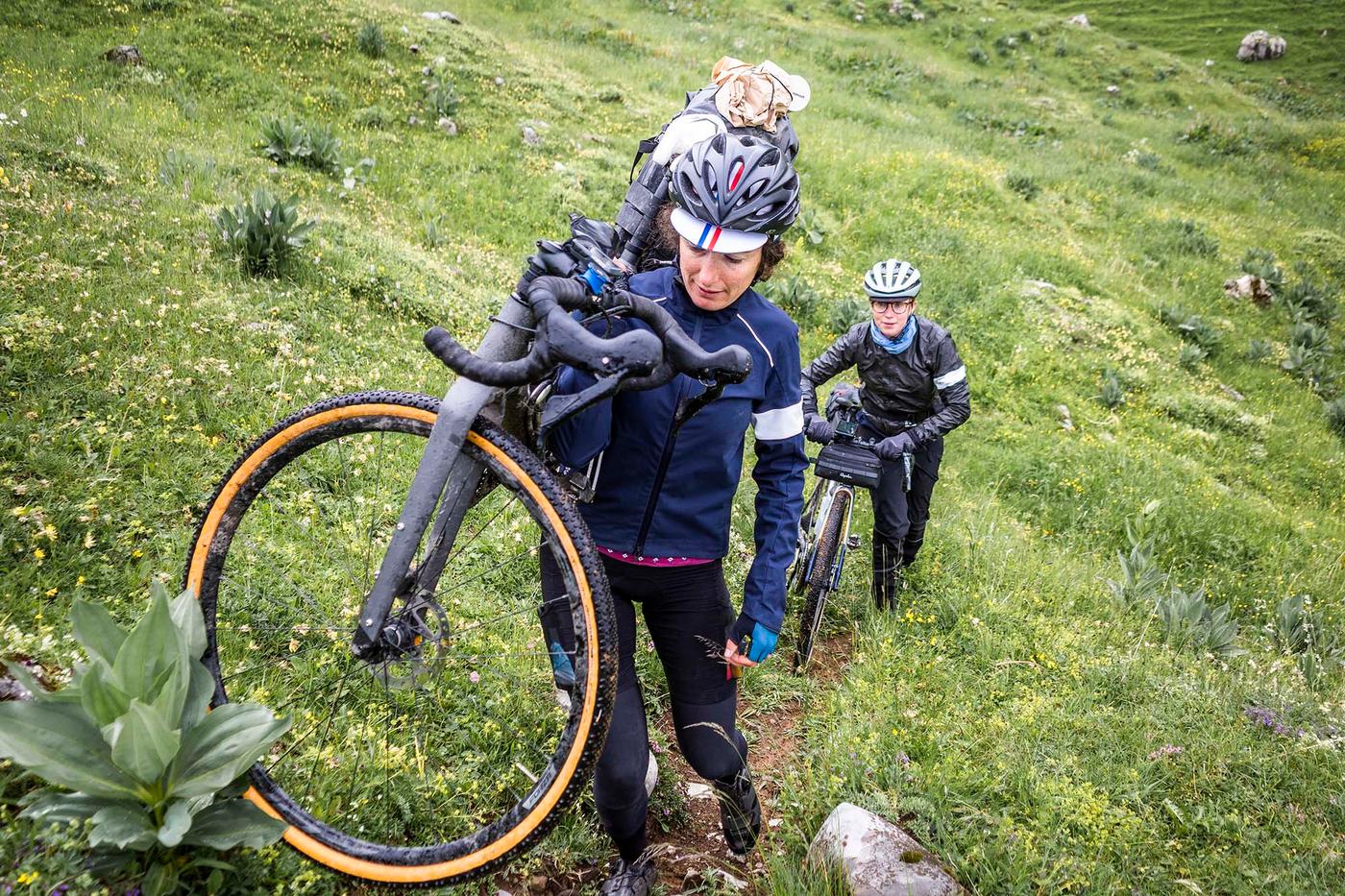 “Sophie taught me that they have nicknames for cows. The white-spotted ones are called Blanchettes.”

I take Rue’s bike to push for a while. I’m happy to be with her every minute of the day– even pushing a bike up a mountain in the rain.

We make it to the hut, roll her bike undercover and go in to get warm by the stove. We find out we’re the only guests tonight. The eleven of us will stay the night in the Bostan Refuge, a hut with the capacity to sleep eighty.

Everyone is inside by the time it really starts to pour. I’m so grateful for the shelter and warmth.

We order a couple of pitchers of local beer on draught, a blonde, and a Blanche. We pour nine glasses. Mathias and Sami choose red wine. 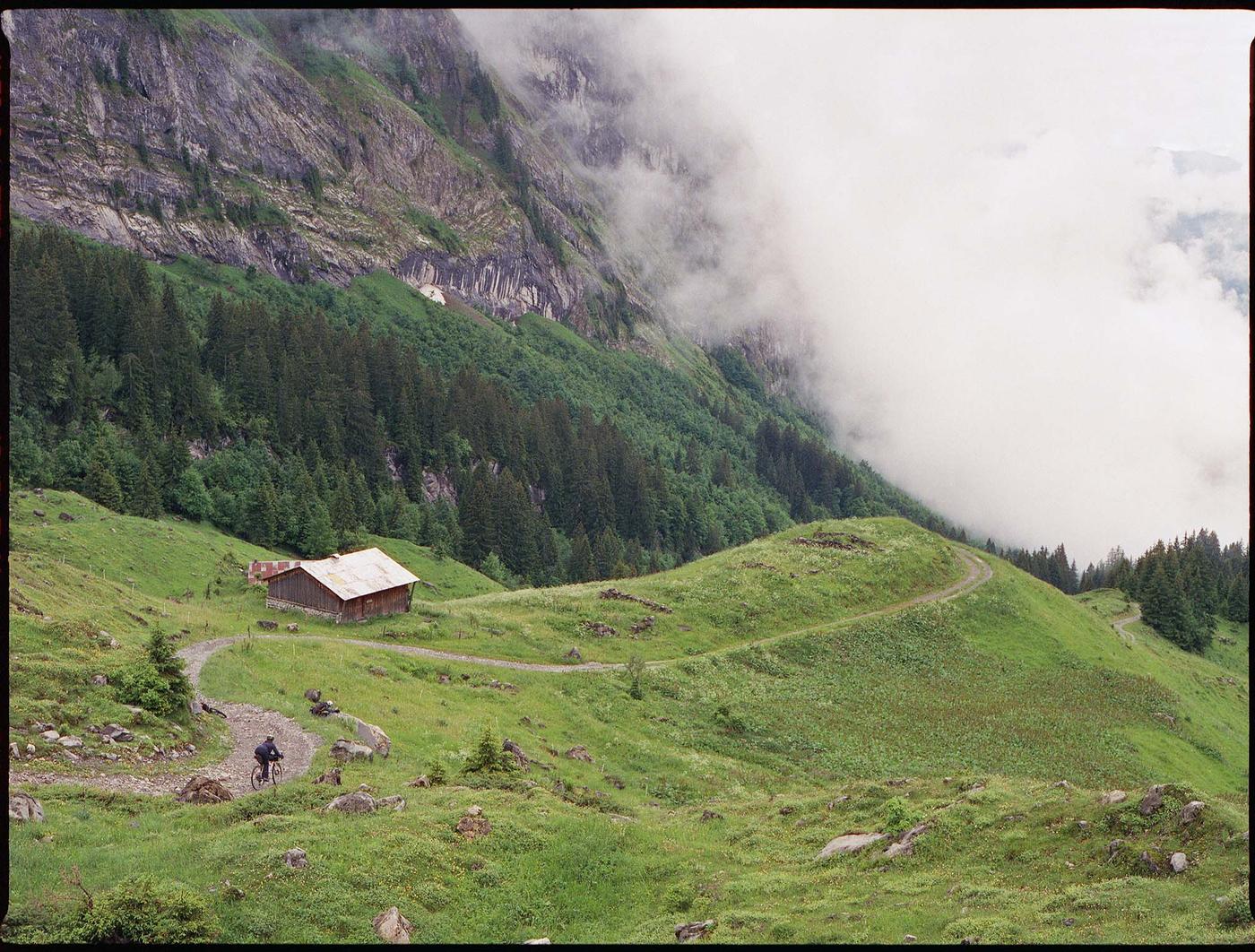 There are hangers above the fire to dry out clothes. The main room is made all of wood, with long tables and benches. Dinner is not far off. The young guys manning the hut bring out a huge bowl of soup, a ladle, and crusty bread. It’s red lentil potage followed by salad and cheesy noodles. It’s served family-style and we eat well. Everyone is rosy, in from the cold, and warmed up from the inside out. We bring our shoes and socks by the stove to dry out.

I’m the first to go to bed. The Refuge host shows me the way, up the stairs and into the room at the end of the hall. There must be thirty bunks with sheets and pillows. Rue and I lay out our double sleeping bag and hit the sack. I don’t hear the rest of the crew come in. Sometime in the night, I wake up from a nightmare yelling.

Rue walks me out to the hallway and I actually wake up. I was dreaming of being trapped in a room where someone was trying to electrocute me. She takes me down the hall to pee and goes back to bed. I fall back asleep. I’m 35 years old, screaming at the slumber party.

I wake up at first light and sneak down to the main room to do my planks, push-ups, and back exercises. 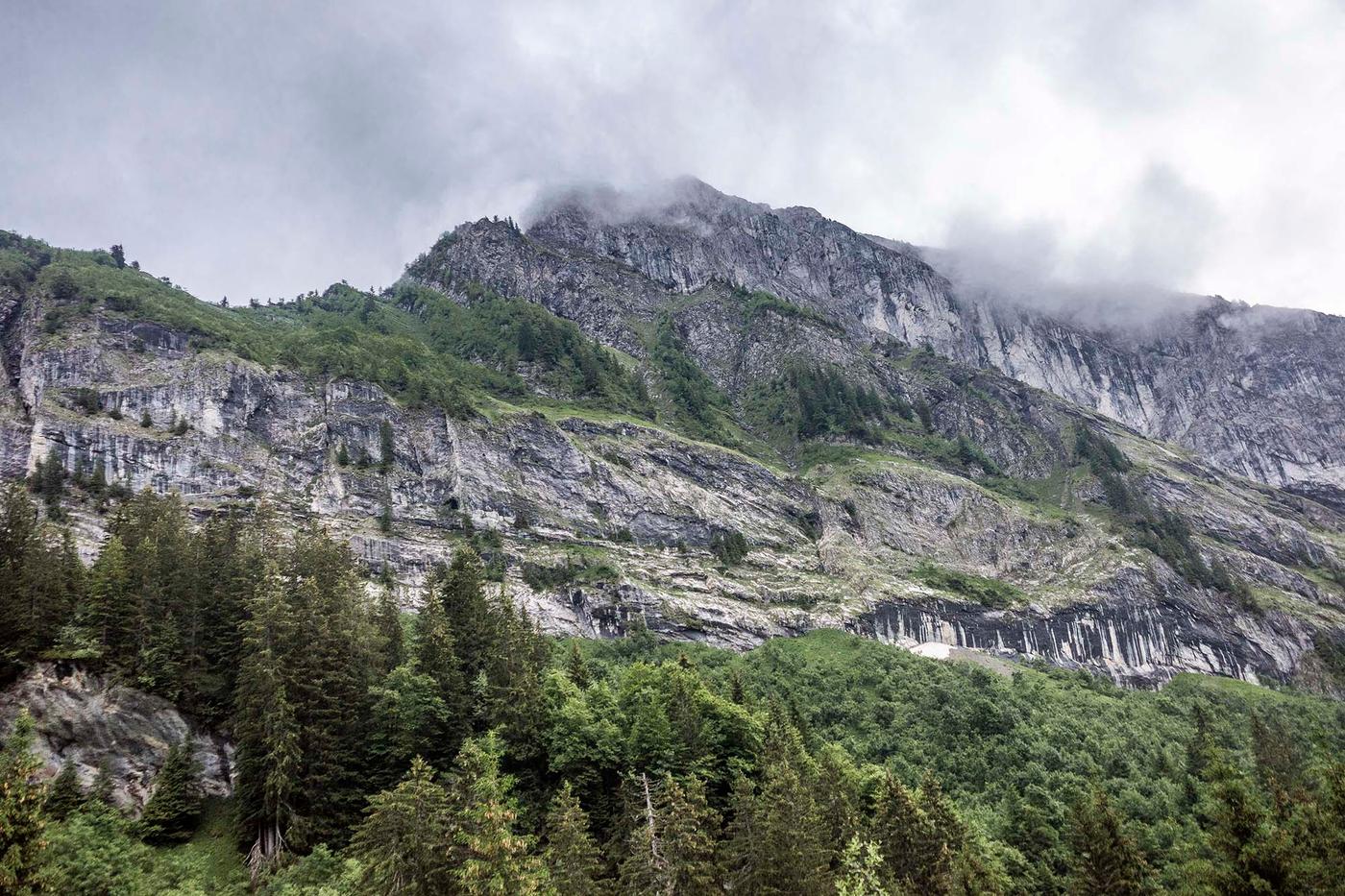 Mathias is down there, sleeping on the couch. He tells me the room was too hot and he’s right. It was toasty in there. We whisper and I get to work– I do four two-minute planks with rest in between, 100 push-ups (40 narrow and 60 wide), and the 12-minute Foundation Training. I go back up to the bunkroom and crawl into bed to snuggle Rue for a few minutes.

I think Sami is the first to speak.
“It was so hot! We should’ve opened a window. You two held each other all night.” It’s true. That’s just how we sleep.

I stuff the sleeping bag back into the drybag and we head to the main room for breakfast– coffee, tea, orange juice, bread, butter, jam, granola, and milk. They’ve packed us sack lunches to go. We fuel up and pack up our bikes. Before we leave, Sophie says we must take a photo-bidon. She sets the timer on her iPhone propped on a water bottle and we take a group photo. Then, we’re back on the go. 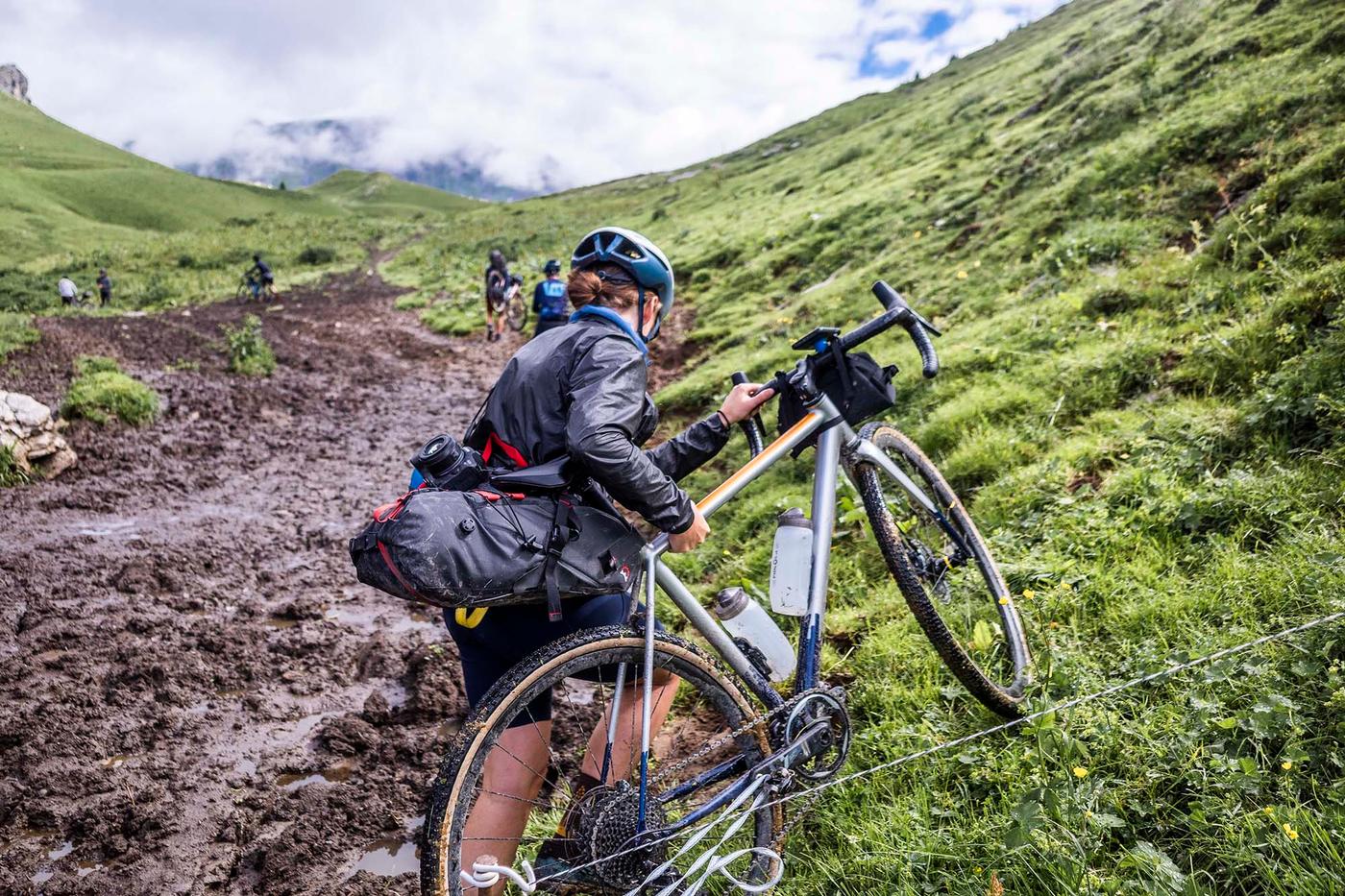 It’s a descent to a singletrack traverse, then a push through cow mud, then a ripping descent along a creek and a sneaky 500 meter climb at the end. We stop for coffee at the top. I’m a week out from finishing the Hope 1000 in Switzerland, a 1,000km mountain bike race with 30,000 meters of climbing. It feels like a million bucks to be back on the bike.

We make it back to the cabin in Saint-Jean d’Aulps. The overnight wasn’t far, but it was full– climbing and descending, pushing and sitting back, plenty of time for espresso and sleep, heart rates through the roof and hot meals at the table, hard riding with the best company. I could get used to this. 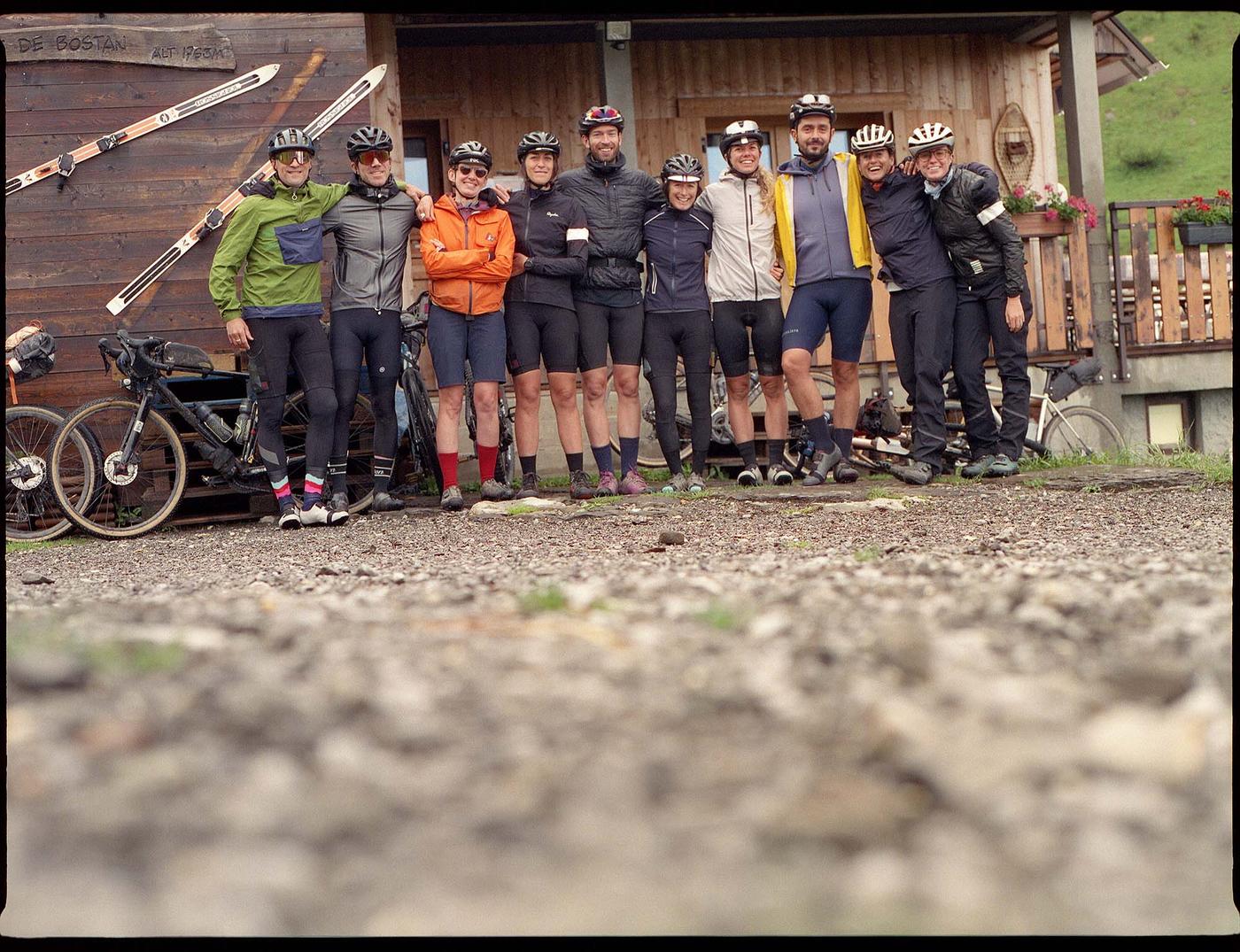 We ask if we can join Gaby, Ben, and their kids for their ride to school in the morning. Their four-year-old, Coralie, rides singletrack to Kindergarten every day. Gaby and Ben both have tiny seats on their top tubes for their two-year-old, Jasper, to sit on. I’m pretty sure that’s a real-life fairytale.