The Cheerios and fresh-cut strawberries were still swirling around in my mouth as I applied sunscreen. My bike was ready to roll, quietly leaning up against the fence outside the van. My rear brake was rubbing, but I decided that I’d rather ride with a little more resistance than be late. I hate being late for group rides.

A few nights prior, I saw Taylor Phinney post a flyer on Instagram. The plan was simple: a mixed surface adventure ride to an art show. Some of the pieces had never been shown before, but all of them helped him transition out of the world of being a professional athlete. Taylor strolled around the group, chatting with both friends and newcomers. Clad in a cotton t-shirt and denim shorts, you might not think that this is someone who was the world champion in something, let alone competed in the Olympics. But that’s the funny thing about a place like Boulder; you never quite know who you’ll run into. 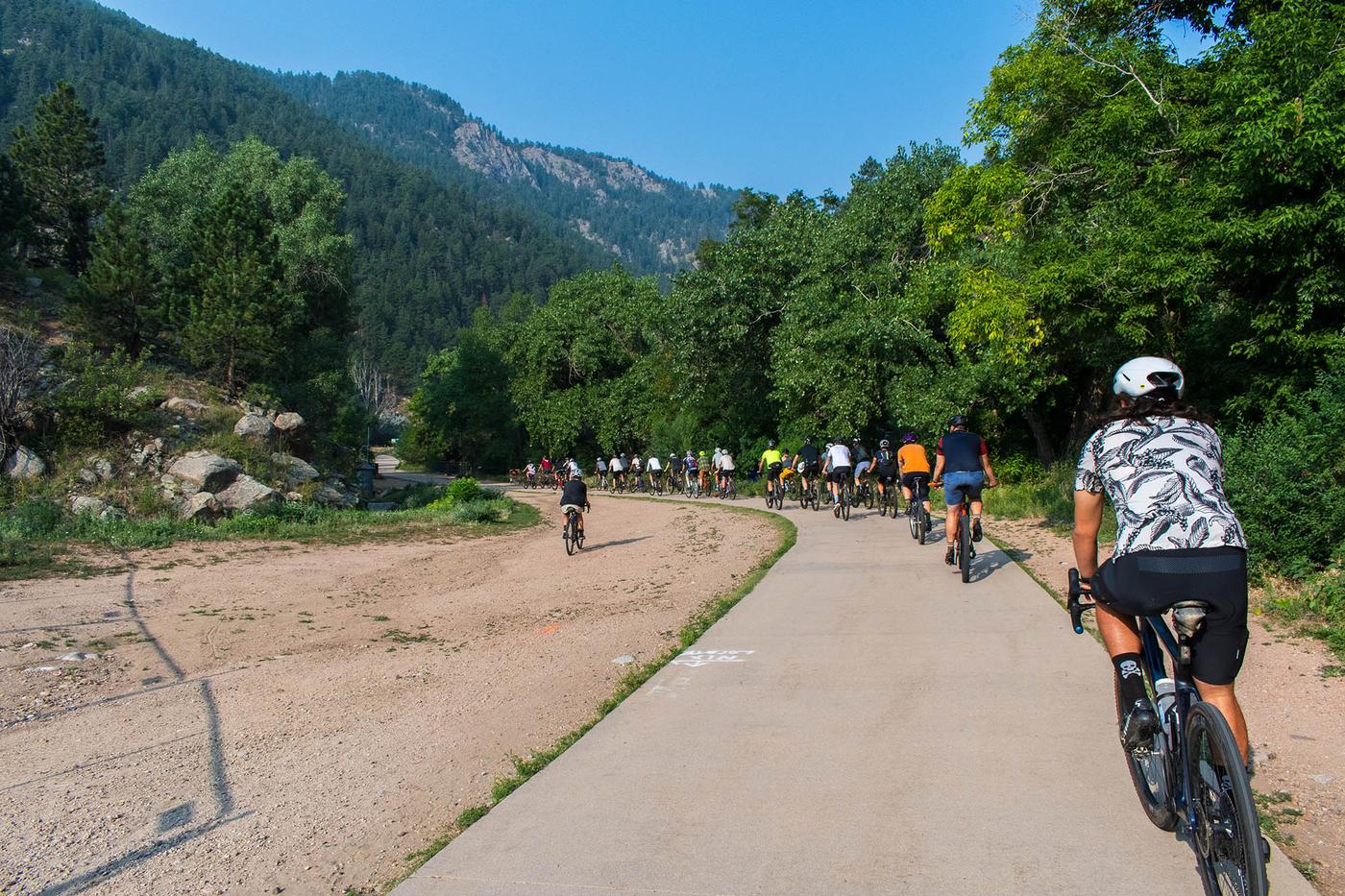 Riders filed in over the course of the next half hour, as we tried out samples from Skratch Labs. I soon realized that my early urgency didn’t make much sense. It was like going to see live music; it might not run on time, but it’s always worth it. 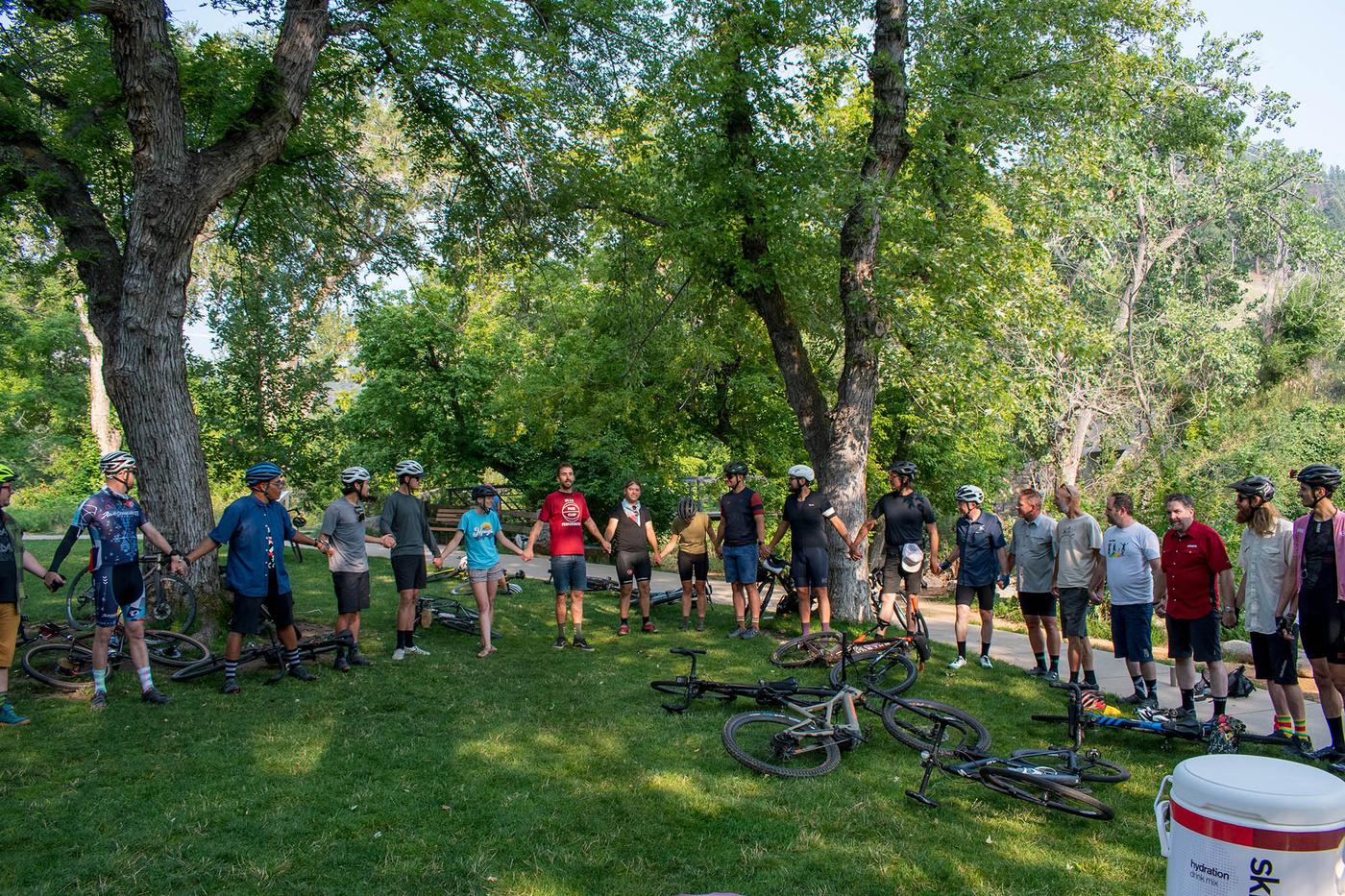 Our group was called together, and we were asked to join hands. We formed what was called a gratitude circle, as Taylor gave some opening remarks. He expressed thanks for people coming together, and asked us to be kind to those we see out on the road (regardless of how they treat us). This was meant to be a day of positive energy, and we moved forward with those thoughts. 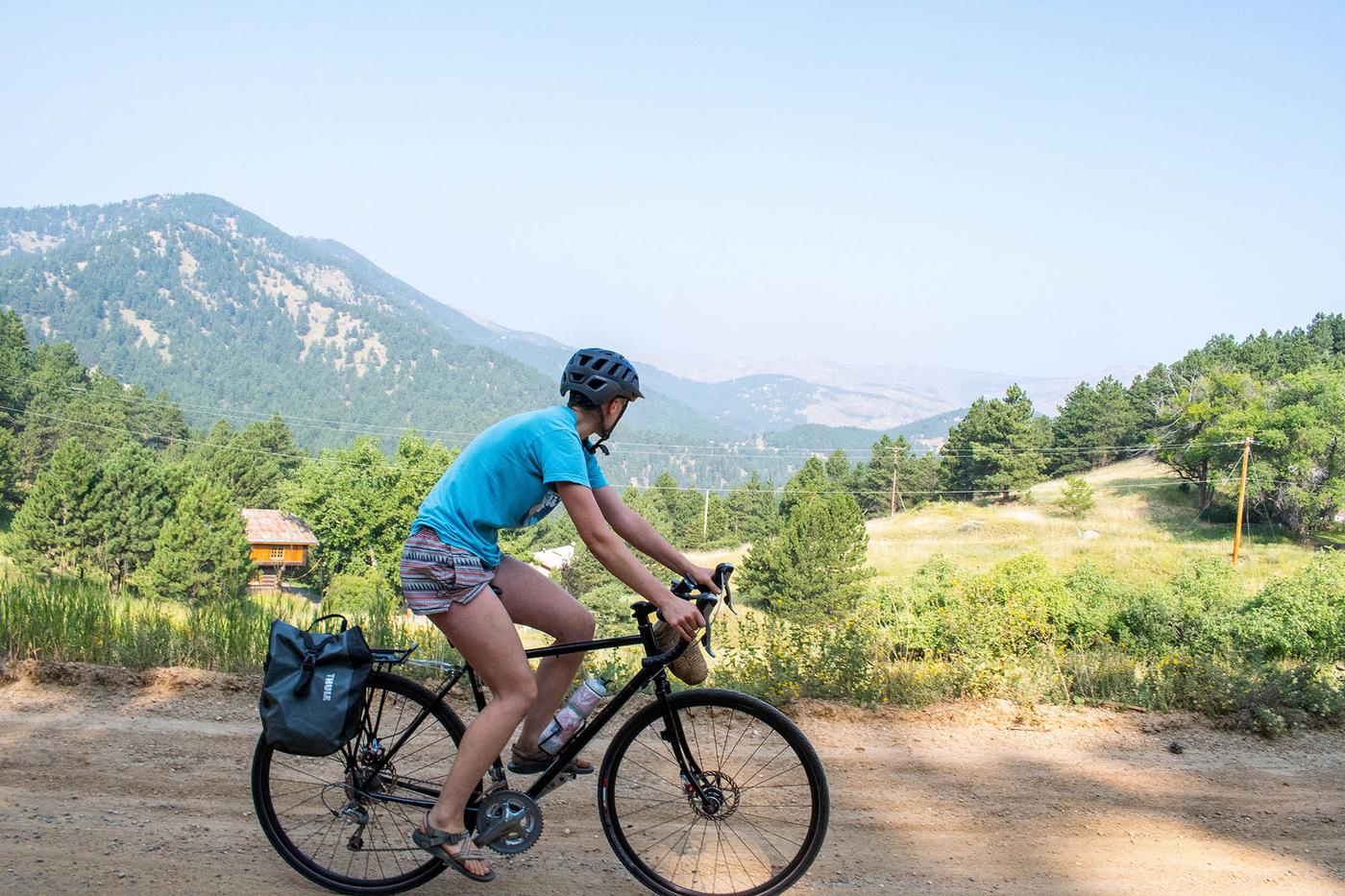 The group slowly rolled out of Eben G. Fine park, up Boulder Canyon. We were an eclectic mix: bikepackers with frame bags, gravel grinders in spandex, and mountain bikers with button-up shirts. In one part of the group, you could find Ellen Noble with her Red Bull helmet. In the same group you could see someone like me, riding in sandals. As the road continued to rise, I began to feel the elevation. I had only been in Colorado for a week, and my breathing showed it. I felt myself slipping off the back, bringing back memories of being the slowest Junior racer in the peloton. I kept my cadence steady, and waited for Fourmile Canyon Drive to claim others. While the ride was advertised as a social pace, a climb like that is unforgiving. There’s a balance to be had with these kinds of rides. You don’t want people attacking each other, but you also have to get up the climbs eventually. I watched the group go up the road, and settled into my rhythm. No hard feelings.

As we reached the top of Fourmile, I began to catch up to others. I was joined by Anna Staat, cheerily climbing on an old Specialized Sequoia. We quickly noticed that we were the only two riders wearing sandals, a choice we defended to each other. She was preparing for a cross-country tour, down the Pacific coast to Mexico. I sounded like a vacuum cleaner at this point, but she was light on the pedals, almost effortless. It was the kind of style you get from being young, riding everywhere, all the time. A climbing chalk bag dangled from her handlebars, with her phone inside. She put on some music, and we were left climbing to the sounds of Fleetwood Mac and The Eagles. When asked about her cheery disposition, she replied with “It’s more energy to be negative than to be positive.” 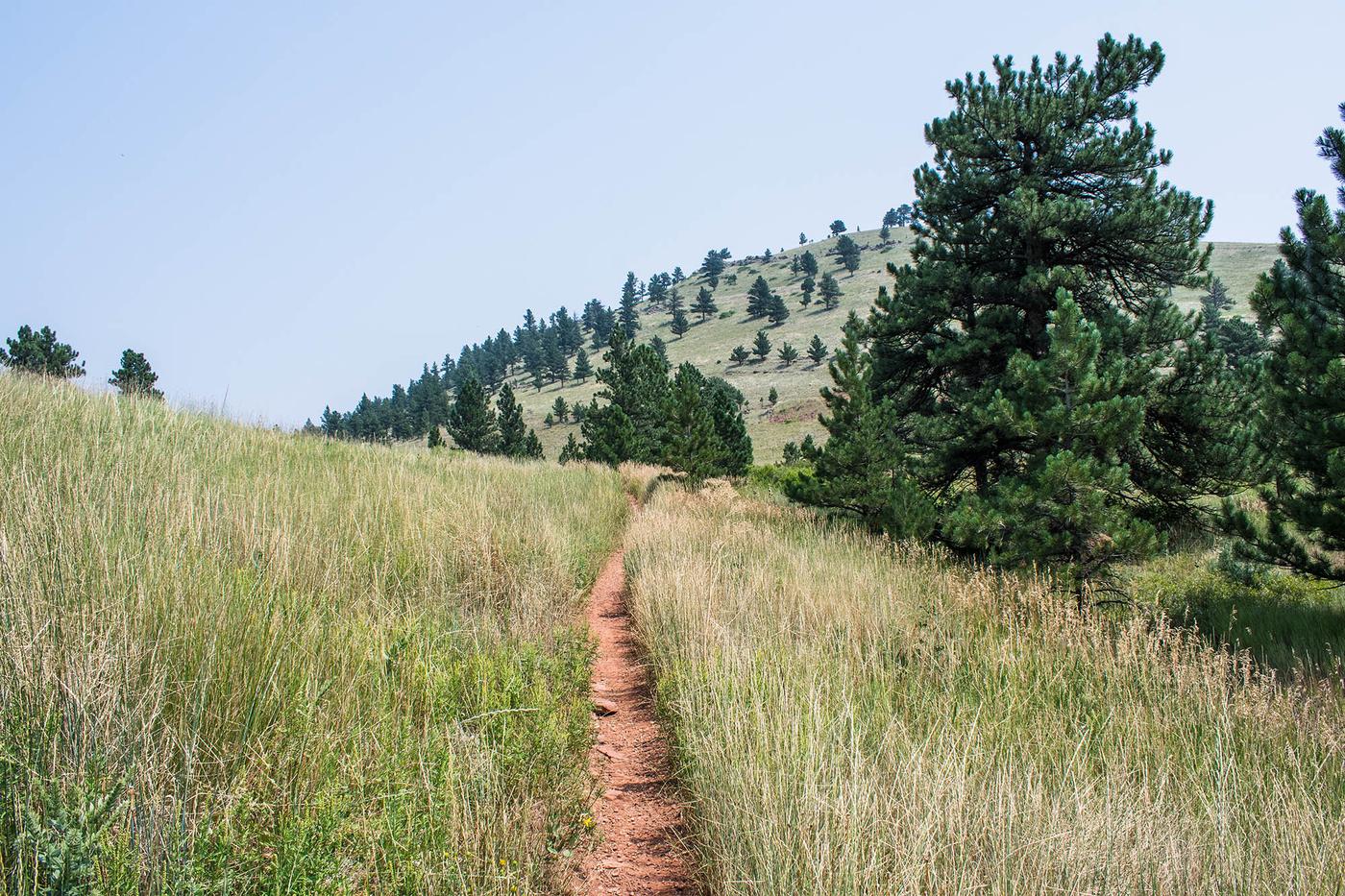 Two more riders came into view, Joel Kivett and Andy Woolard. The four of us quietly made our way up, higher and higher into the mountains outside Boulder. We passed secluded mansions, backwoods cabins, and fire safety signs. Gone were the weekend warriors who trained on Fourmile, we were in gravel country of the Front Range. The day was still young, but the sun was relentless. Each shaded climb was a welcome relief. 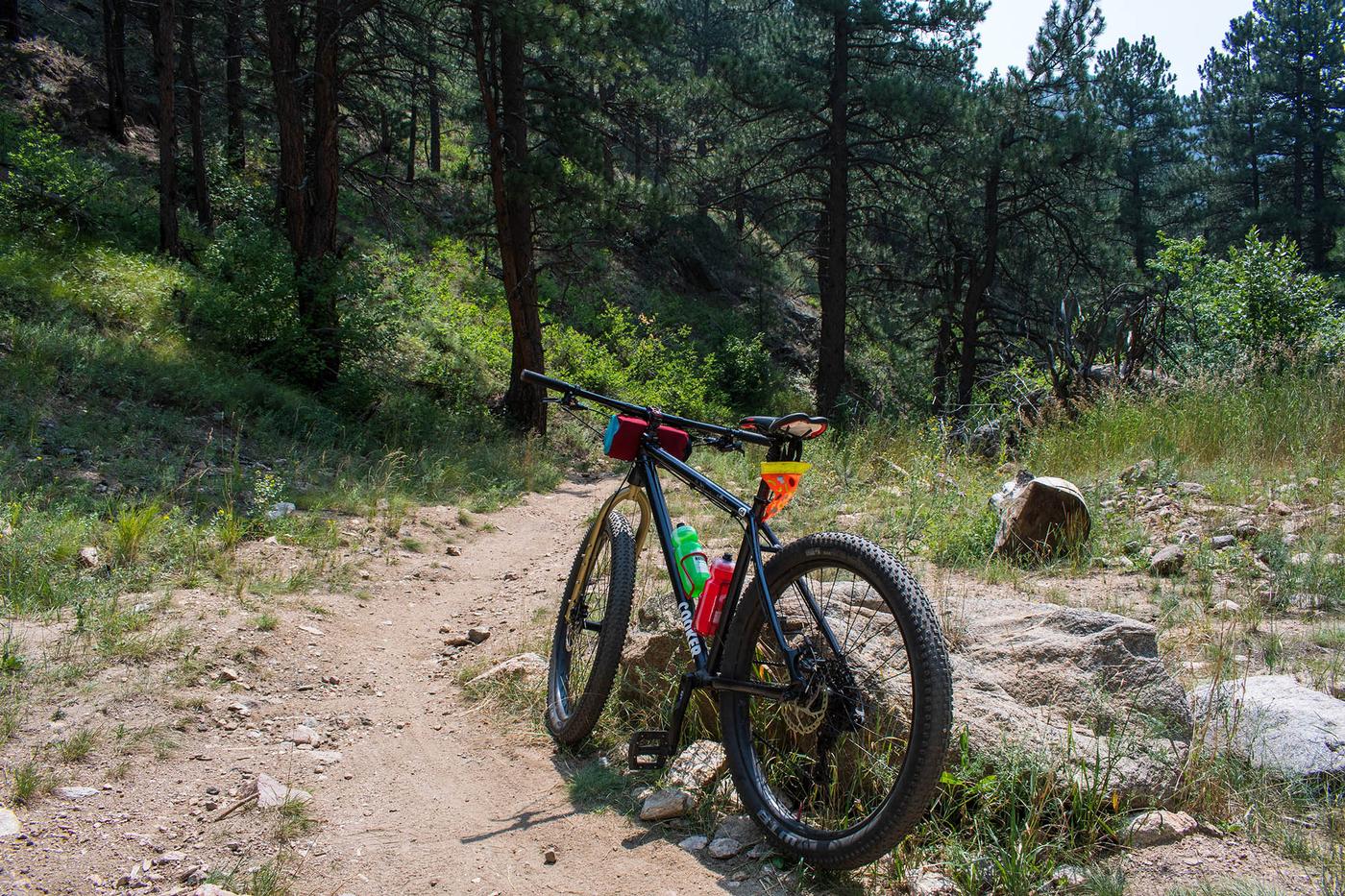 Colorado is the place where you trade cell reception for majestic scenery. We soon realized that I was the only person who had the route downloaded beforehand; a simple act that paid off immensely. It allowed us to correctly find Sunshine Saddle Pass, in order to make our descent. After climbing for an hour, out of the wildfire smoke, descending was a great idea. 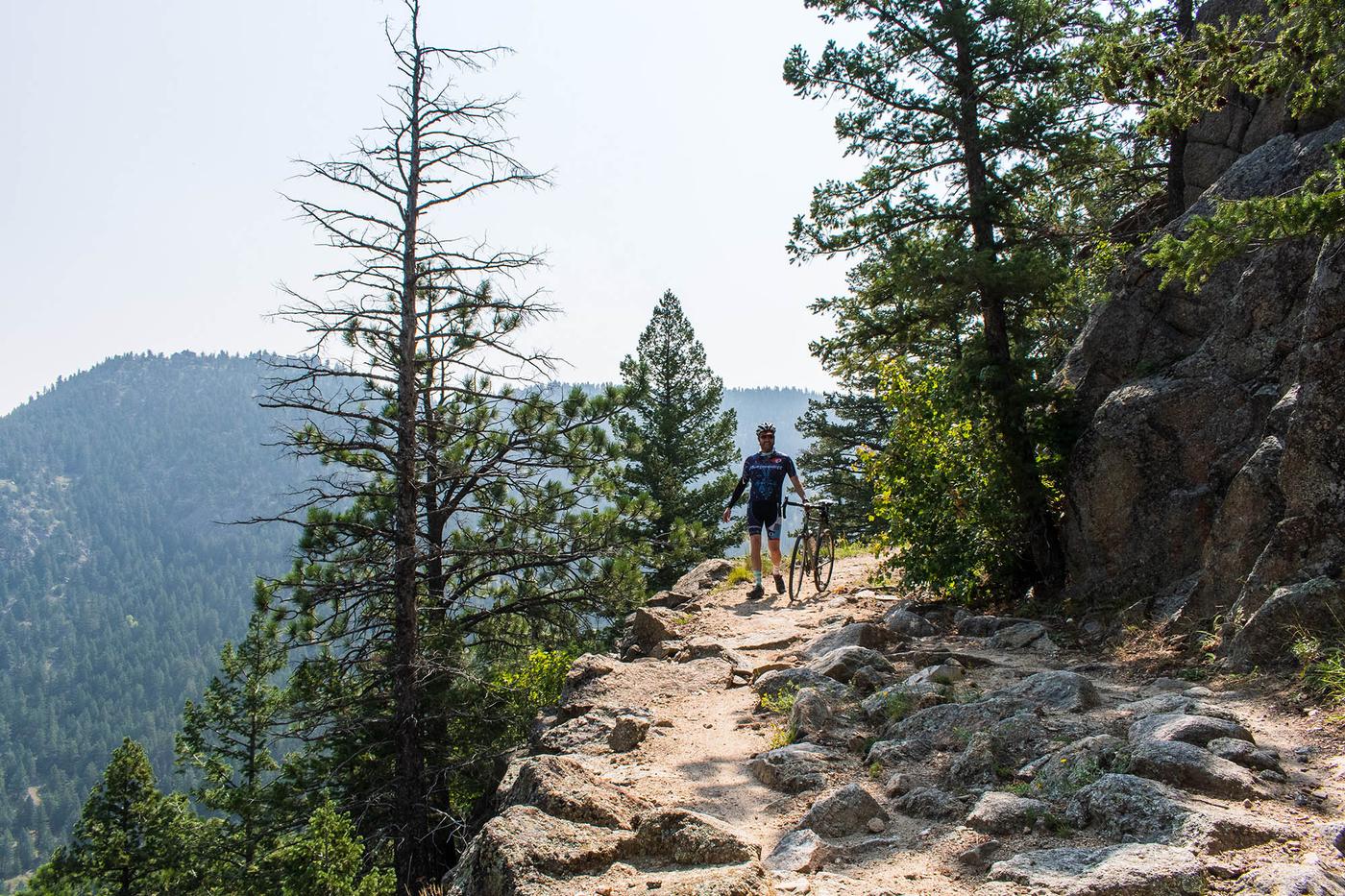 The way down was a rocky trail cut out of the side of a mountain. In front of us laid grapefruit-sized rocks, which made me nostalgic for riding in the Northeast. To our right were cliffs that overlooked Lefthand Creek, hundreds of feet below. It wasn’t the time to think of Wile E. Coyote. Joel and I were thankful for our mountain bikes, as we rolled through the chunder on our way down. Andy and Anna, both on road bikes, understood that walking through a rock garden was better than taking a ride out in a helicopter. Our drop bar friends were good enough to wait up on the climbs, so I extended the same courtesy on the way down. As we rattled through the Aspens, the creek started to get louder, and the road below got closer. 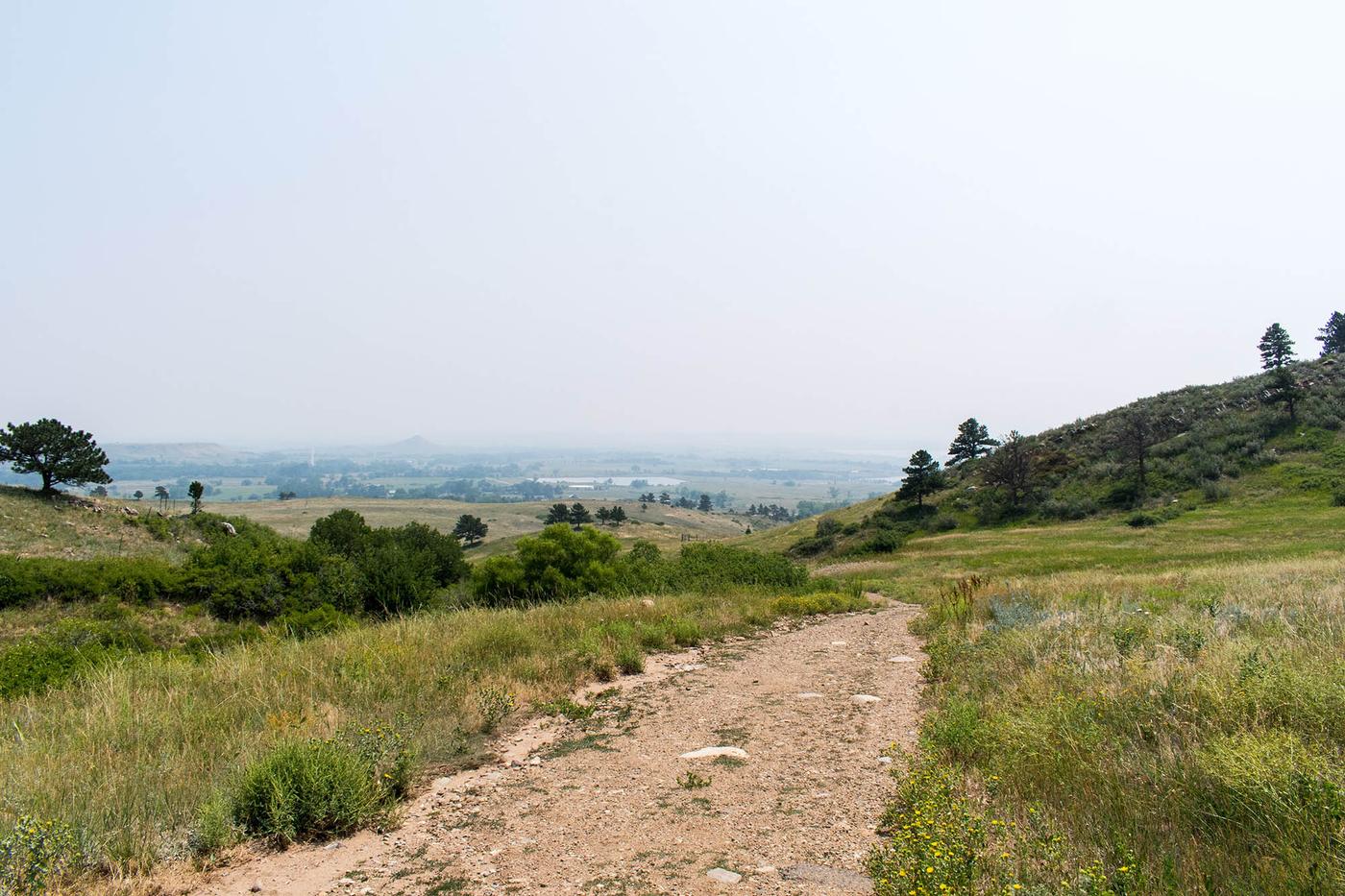 We spilled out onto Lefthand Canyon Drive, our hands still recovering from the rocks. The asphalt blurred beneath our tires, and we felt the summer wind again. It’s remarkable how quickly the mountains melt away when you’re going down instead of up. After some discussion, Andy and Joel decided to take a shortcut back to Boulder. That left Anna and I with the singletrack route. We climbed a dirt path off of Lefthand Canyon, and set back out into the trees. We knew we were getting closer to civilization, but it was anyone’s guess as to how long it would take. Water was running thin, and the sun was getting hotter. 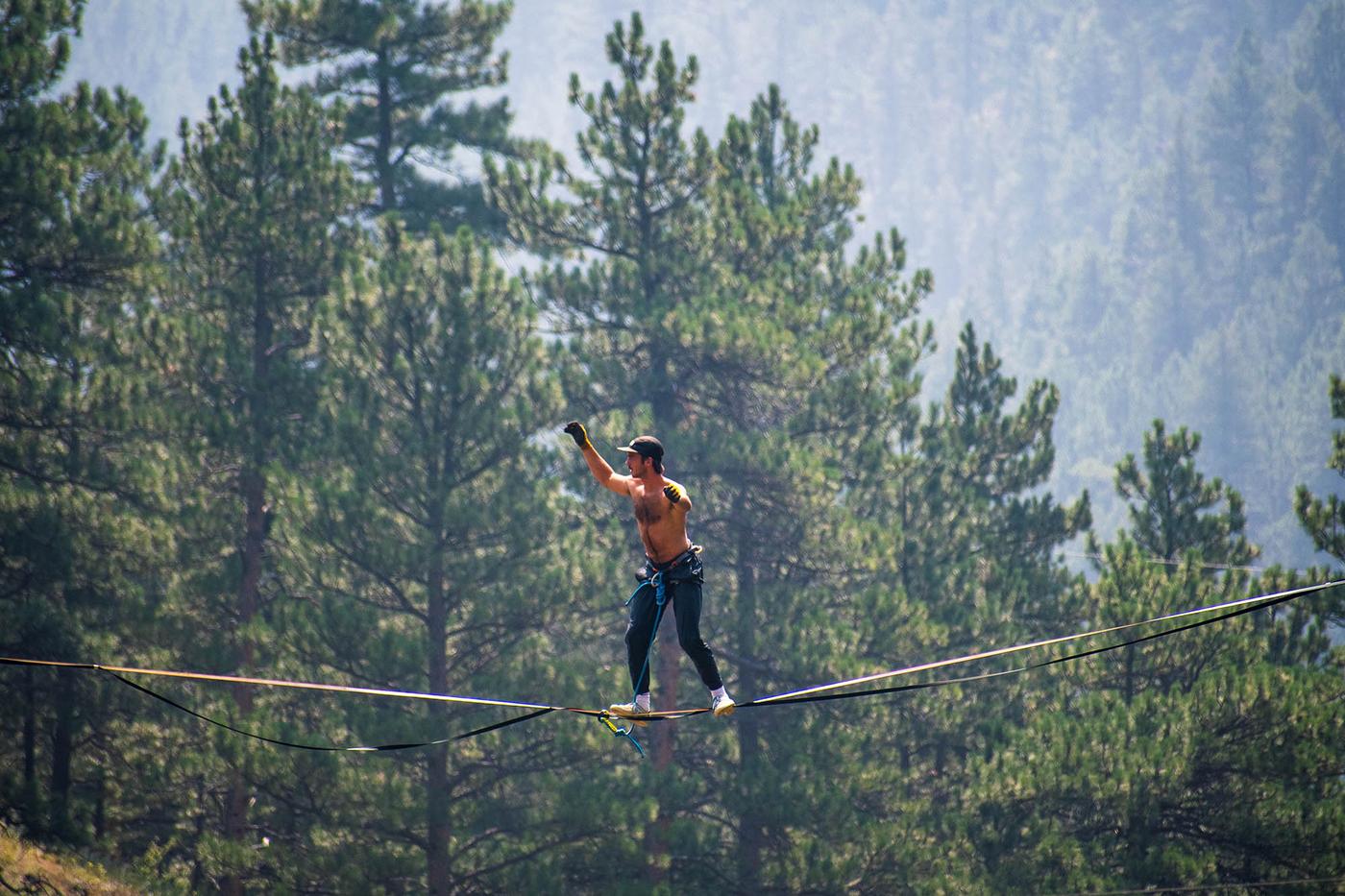 We followed the serpentine trail out of the mountains, past wildflowers and Davis Hermes on a slackline. Anna and I tried our best to remain optimistic, but the heat and lack of water was getting to us. We decided to cut the last leg off the route, and make our way directly back to the gallery. As our teeth chattered from descending gravel, I flipped off the last little hill that was laid out in front of us. We got onto Route 36, and rode off into the plains. As extended cab trucks ripped past us, I bonked like I had never bonked before. The kind of bonk that has you lower your dropper post to give your legs a brief rest. Anna’s blue shirt faded into the distance. A few miles in the sun felt like a lifetime, but we made it. As I walked through Taylor’s show, I thought about how the ride paired with this experience. The goal was to bond with strangers, through the shared experience of bicycles and art. The ride was excruciating at times, but so must’ve been Taylor’s experience as a pro athlete. His journey is fraught with triumph and heartbreak, as well as recovery and growth. Those experiences fueled his art. One painting included a UCI anti-doping form, worked into the abstract composition. As I studied his work, it all seemed to make more sense. 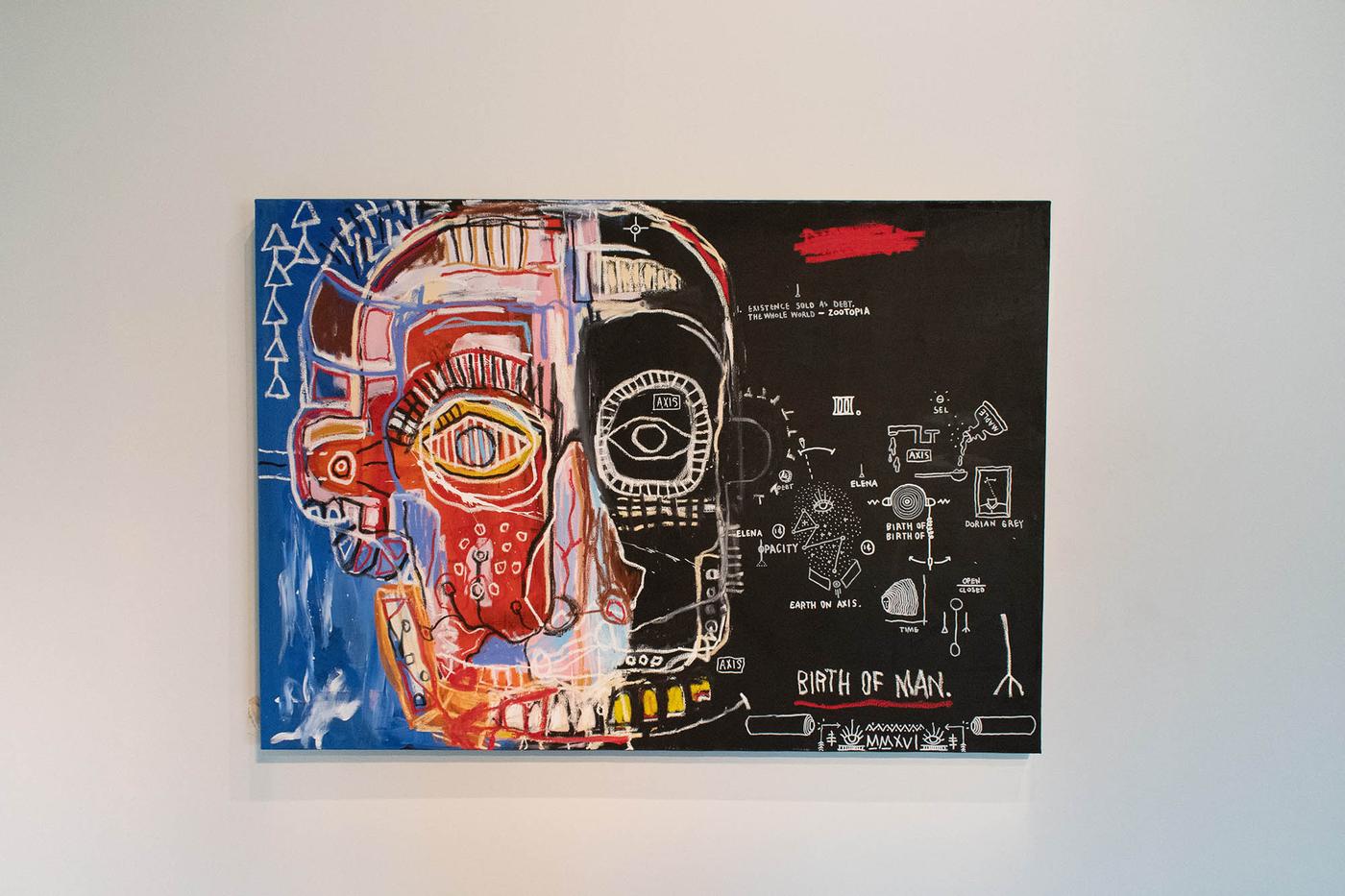 The ups and downs of this ride brought the four of us closer together. Four otherwise strangers, united by a goal of getting over mountains without throwing up. Sure, it’s a bit Breakfast Club of me to say, but riding bikes will do that for you. As for my own journey, I had to make peace with being left behind. I’ve never been the strongest rider of the bunch, so it gives me plenty of time to reflect as others go up the road. The art show started about an hour before I arrived, so my memories had to be supplemented by what I saw on Instagram. It’s not their fault for starting without me, but rather the opportunity for me to become stronger for next time.

There’s plenty of work to do, but I’m ready for it. After all, it costs more energy to be negative than positive.