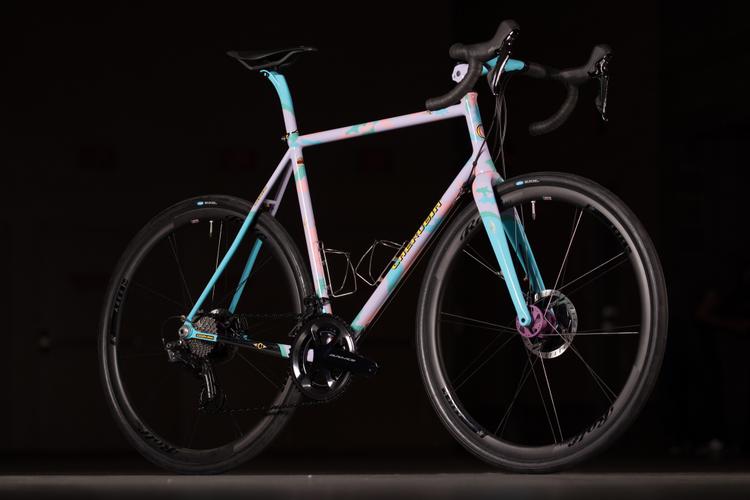 Admittedly, I was bummed when I didn’t see Japan’s Cherubim‘s name on the list of exhibitors of NAHBS bikes but was thrilled to find one in the Rolf Prima booth. This particular bike is Cherubim’s first ever “all road” bike and was made for Blacksmith Cycles. It features clearances for 38mm tires, fender mounts for matching Honjo fenders, flat mount brakes and custom-selected Kaisei steel tubing.

When Kyle reached out to Greggy for the back-story on how this gorgeous Cherubim Racer Road came to be, he answered in such a manner that was just too good to chop up or paraphrase, so here it is, albeit slightly edited down for content.

So… Why a Cherubim and what inspired this bike?

“Well, the choice took a forever for many reasons, but I’ll condense it for you…The Cinelli Laser and several NJS frames are my favorite frames to gawk at. If a Cinelli Laser and a 3Rensho had a baby, that was the style of frame I wanted built. I started looking for frame builders in 2012 and came across Shin-Ichi Konno’s builds on the NAHBS 2013 webpage. The Cherubim racer prototype at the 2013 NAHBS was almost exactly what I imagined. Through emails I communicated with Keigo at Cherubim to have one built. I sent my measurements, the geometries of the bicycles I ride most and find most comfortable before being confirmed for a build in December 2013. Hopefully, on my birthday.

The frame was designed to have a sloping top tube with an integrated stem but my frame size would be too small for an integrated stem. I elected for the traditional top tube without the integrated stem and to have the frame built specifically for the Version 2 Campagnolo EPS group. The most difficult decision was choosing a paint scheme. After three months of being indecisive I decided to have them chose it for me. Then a few weeks later I came across this iridescent purple and blue Bridgestone. I sent the pictures to Keigo and I was told Bridgestone possesses that color, so the frame was sent to their facility for paint.

I got the frame December 2014 and finished the build May 2015. The final product looks more like the child of a Cinelli Laser and Bridgestone Anchor, which isn’t a bad thing, right??”

Greggy, that is definitely not a bad thing!