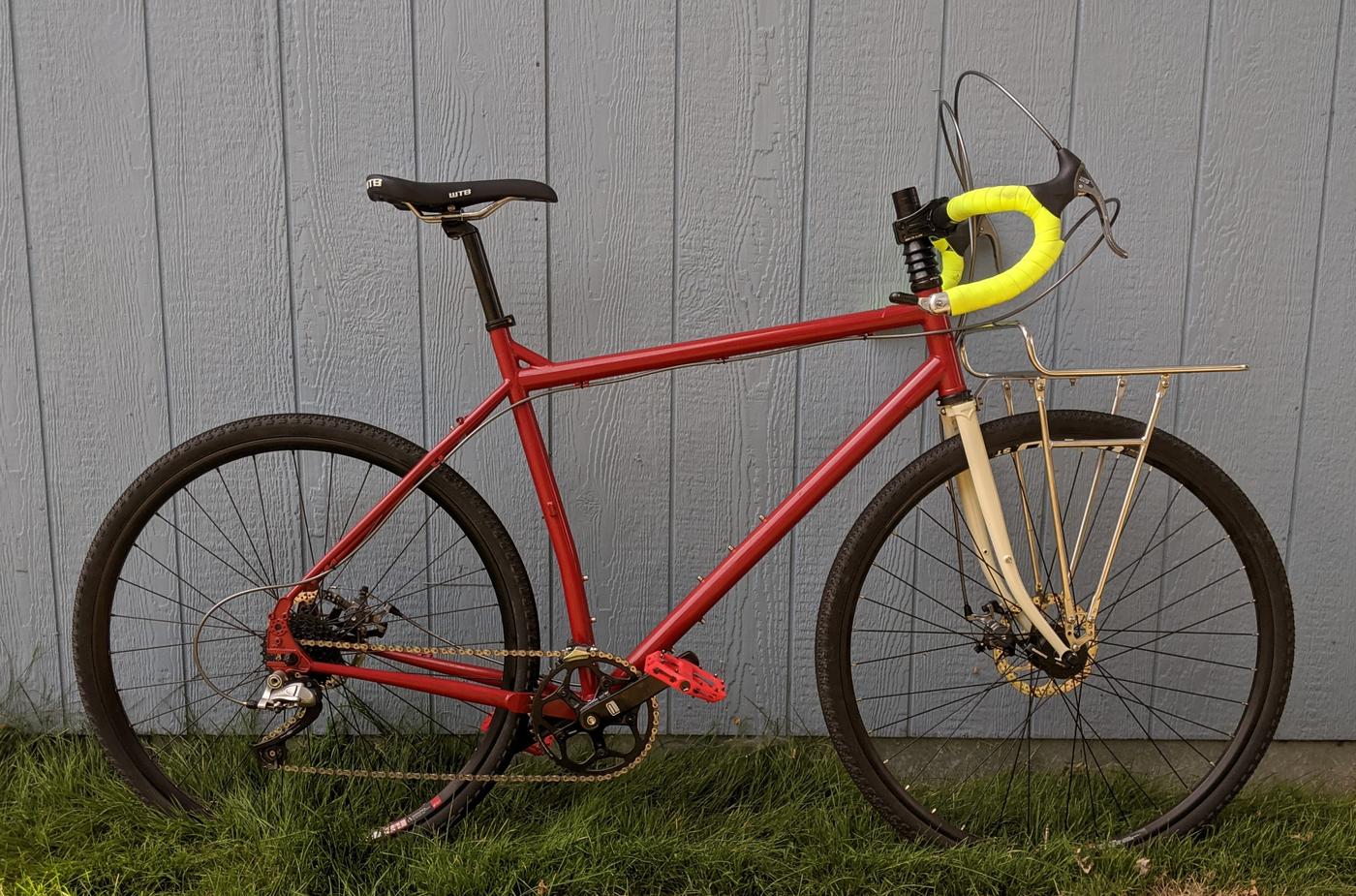 This week’s Readers’ Rides comes from Dann and features his Surly Ogre Rando bike build. Dann wrote a lot about this one so enjoy the deep dive!

My name is Dann, I’m a longtime reader, and I work for QBP, supporting their proprietary brands.
I’d like to share my Surly Ogre custom rando bike with you and your readers. This is more of a design exercise than anything else, and I thought your readers would find it interesting. For reference, I also own an All-City Gorilla Monsoon and a Riv Clem Smith Jr.

This bike was conceived as a way for me to piggy-back on the low-trail fad while staying a cheapskate. There are lots of good, production, low-trail bikes out there (and The Radavist has probably covered them all), but they can get pretty expensive. Since I work for QBP, I wanted to see what I could assemble from the QBP catalog that would approximate the ride of a low-trail bike, and this is the result: the RandOgre.

A bit of frame design theory before I get started, to explain how I went about this. As you probably know, a bike’s “trail” number is a function of its headtube angle interacting with the rake (or offset) of the fork. (Other variables like total wheel diameter, pneumatic trail, and castor angle come into play too, but are of less consideration.) To be considered “low trail,” a biker’s trail number should be lower than ~45mm. The classic randonneuring bikes of the mid- 20th century can have trail numbers in the low 30s. So, that number of <45mm is my goal for this bike.

So, how do I find a frame+fork combination that does that? The obvious choice would be to order the VO Piolet, but remember, I’m a cheapskate. I started with the fork – I’ll need a fork with as much offset as I can find. This turns out to be the All-City Space Horse fork, and specifically one which has an offset of 52mm. Both the 49cm and the 52cm forks have that 52mm offset, but I chose the 52cm version, for reasons that I’ll outline below.

Well, none of the road frames on QBP (in my size) have that 74° headtube angle. What I can do though, is install a (short) road fork on a (tall) mountain frame, because by lowering the headtube of any frame, I’d steepen the head angle. I consulted a Salsa (not-armchair) engineer, who told me that a 10mm shortening of the fork axle-to-crown measurement of a bike is equivalent to steepening its headtube angle by half a degree. I can work with that!

(Astute QBP.com browsers will notice that the All-City Big Block frame in a 58cm or 61cm, paired with a 52mm offset fork, will also get me to that trail number, but that bike doesn’t have the versatility I want.)

With that leg work out of the way, it was time to assemble the bike and see if my bike concept proved usable. I grabbed an XL Ogre frame (QBP #FM0368), removed the decals to keep it from being a theft magnet, and paired that to my All-City fork (from FM0285). Then I pulled parts from my parts bin and soon I had a RandOgre! 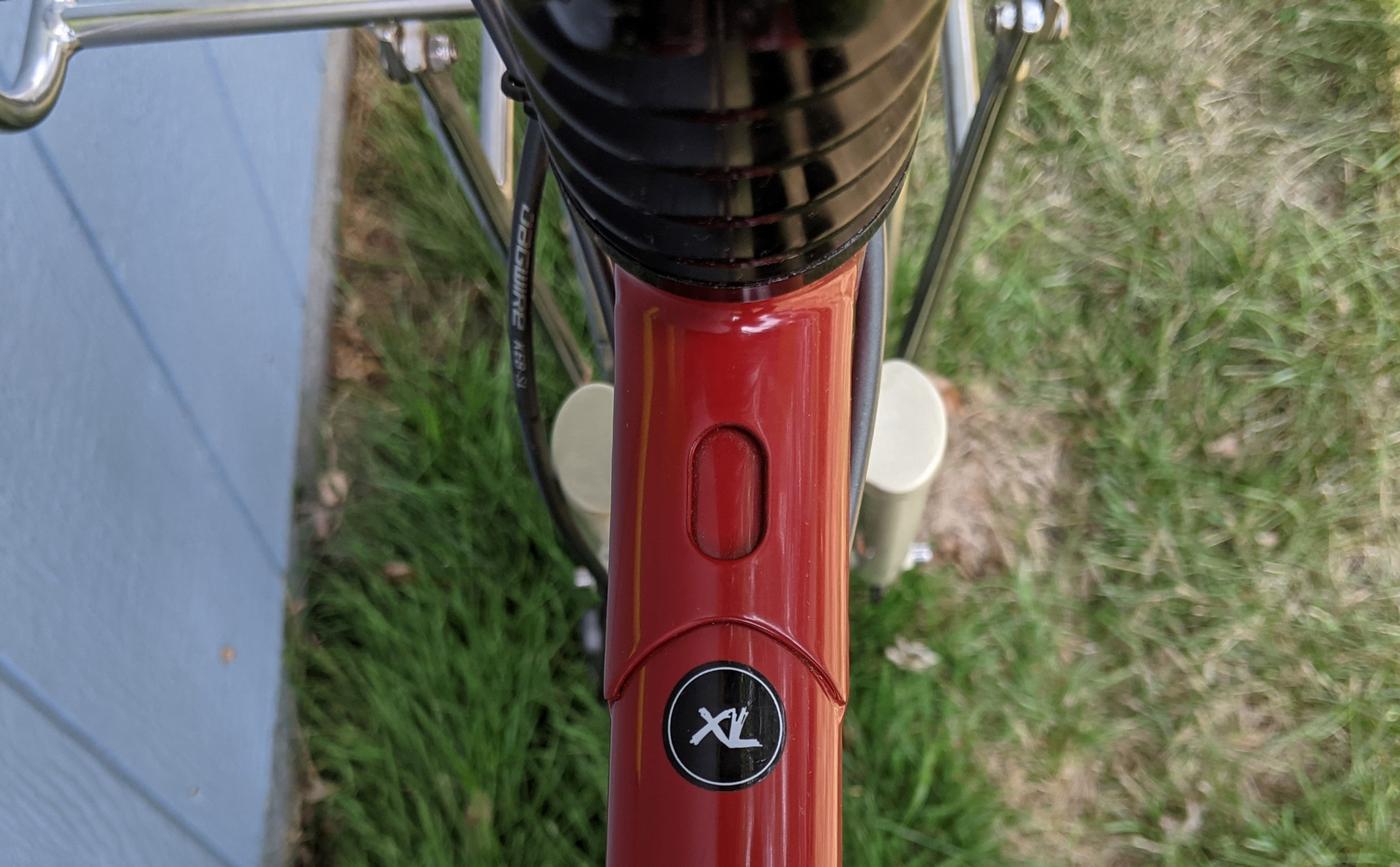 Like many of your readers, I have probably a lifetime supply of Suntour Barcons. The stem spacers were an idea I stole from BlueLug. The headset is an FSA Pig (HD4608), because they are cheap and have robust, oversize lower bearings, which is the most important part of any headset. Bar tape is from MSW (HT3973). 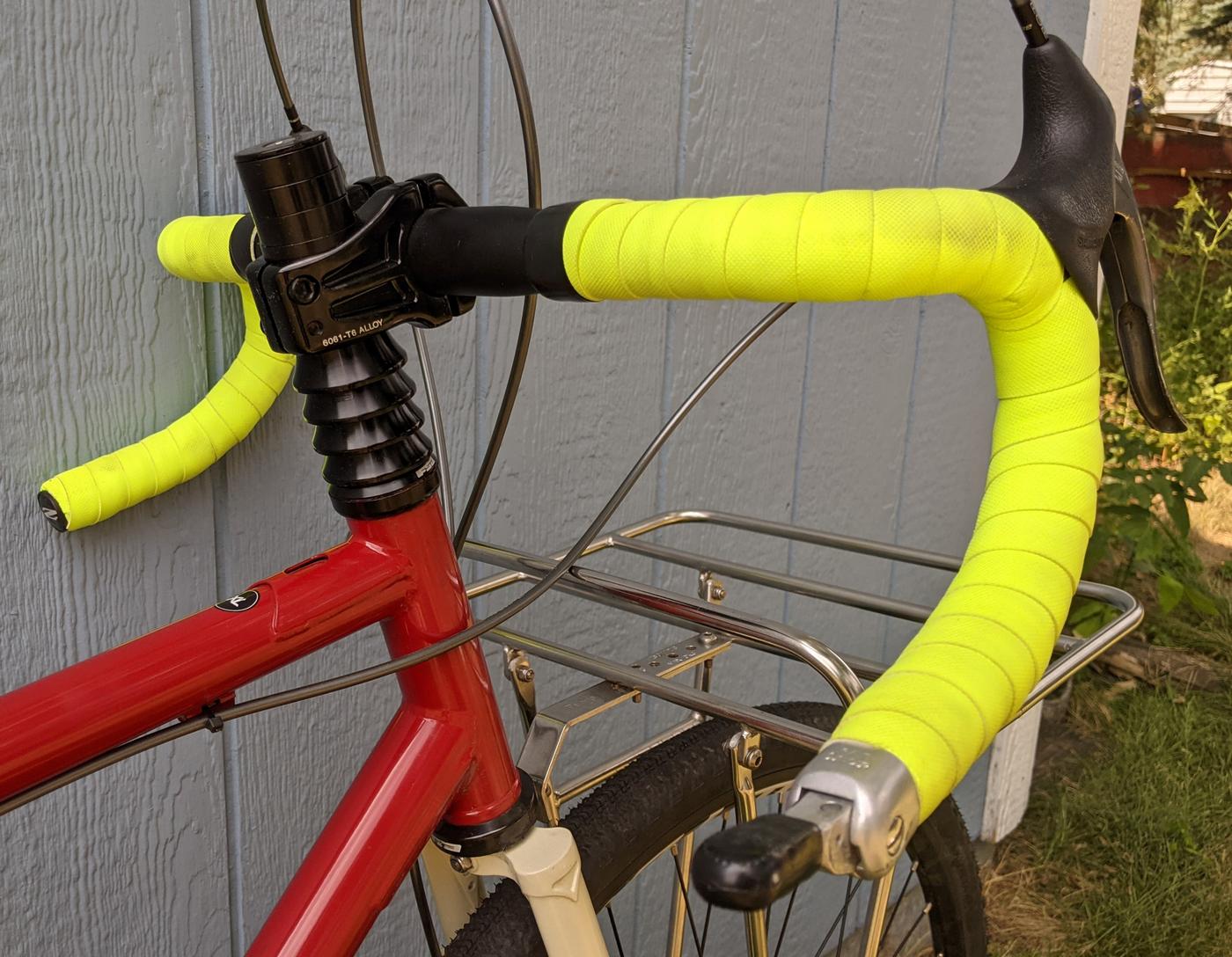 I outfitted the alloy Salsa bars (HB8267) with a 45mm long RADIO stem and Shimano BL-6400, top exit, brake levers. If you want to outfit your L’Eroica bike with full Shimano 600 Tricolor, you need these levers, and this is the only pair I’ve ever seen. I prefer top-exit levers for their straight cable routing and super-direct feel, and these don’t disappoint. I used Jagwire compressionless housing (CA4657) everywhere. Rad. 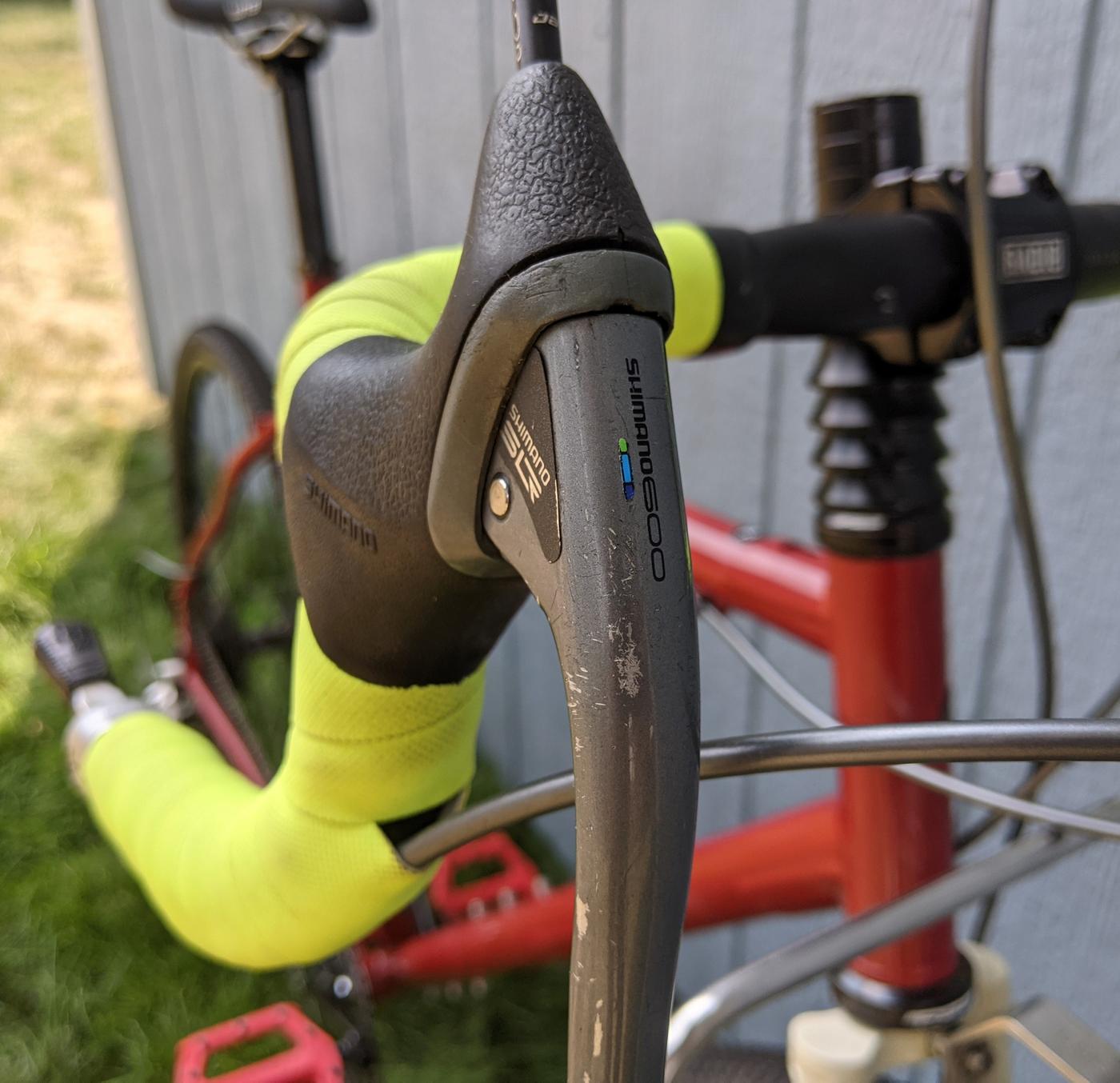 A Shimano XT RapidRise derailleur shifts a 9-speed chain over an 8-speed cassette. Cheap Promax brakes (BR3519) provide adequate stopping power, and yes, those washers under the caliper are necessary. I also sourced a 10x1x20mm bolt to attach the Burley hitch to.

So, I’ll take a sec to talk about the drivetrain, since astute bike mechanics, when they read about how I was going to drop the front end of the bike, probably immediately thought, “What’s that going to do to the bottom bracket height?” This is the correct question to ask, and the answer is, “Nothing good.” This is ultimately why I stayed with the fork with the 395mm axle to crown instead of trying the fork with the 376mm axle-to-crown (which would have dropped the trail to ~37mm).

Despite my hesitations about BB height, my initial mule setup was with 650B wheels and 170mm Shimano Zee cranks. Unsurprisingly, this was near-unrideable; I could barely turn or lean the bike without pedal strike. Upon swapping to 700c wheels, though, the height from the ground to the BB axle became a usable 200mm. The installed 170mm cranks were OK, but not great; I wanted to be able to pedal through turns. So, I got wacky and installed 160mm Promax cranks (CR3545) with a 46T chainring.

Pedal strike became a thing of the past, but also, incredibly, this crank swap livened up the bike, and I now suddenly felt that I was on top of each pedal stroke, with the RandOgre urging me to go faster!

For the chain guide, I modified an old Shimano front derailleur by chopping the cage and removing the spring. The result is a guide that has a tiny bit of lateral movement, allowing it to self-trim whenever the chain climbs up the cassette; more effective than a traditional chain guide! You can see in the above photo that I had plenty of chainring clearance on the drive side. The non-drive side was a little tighter… I even had to relocate the rear brake housing to the inside guide so the crank wouldn’t hit it. Pedals are DMR, obviously (PD1058). Always use pedal washers! 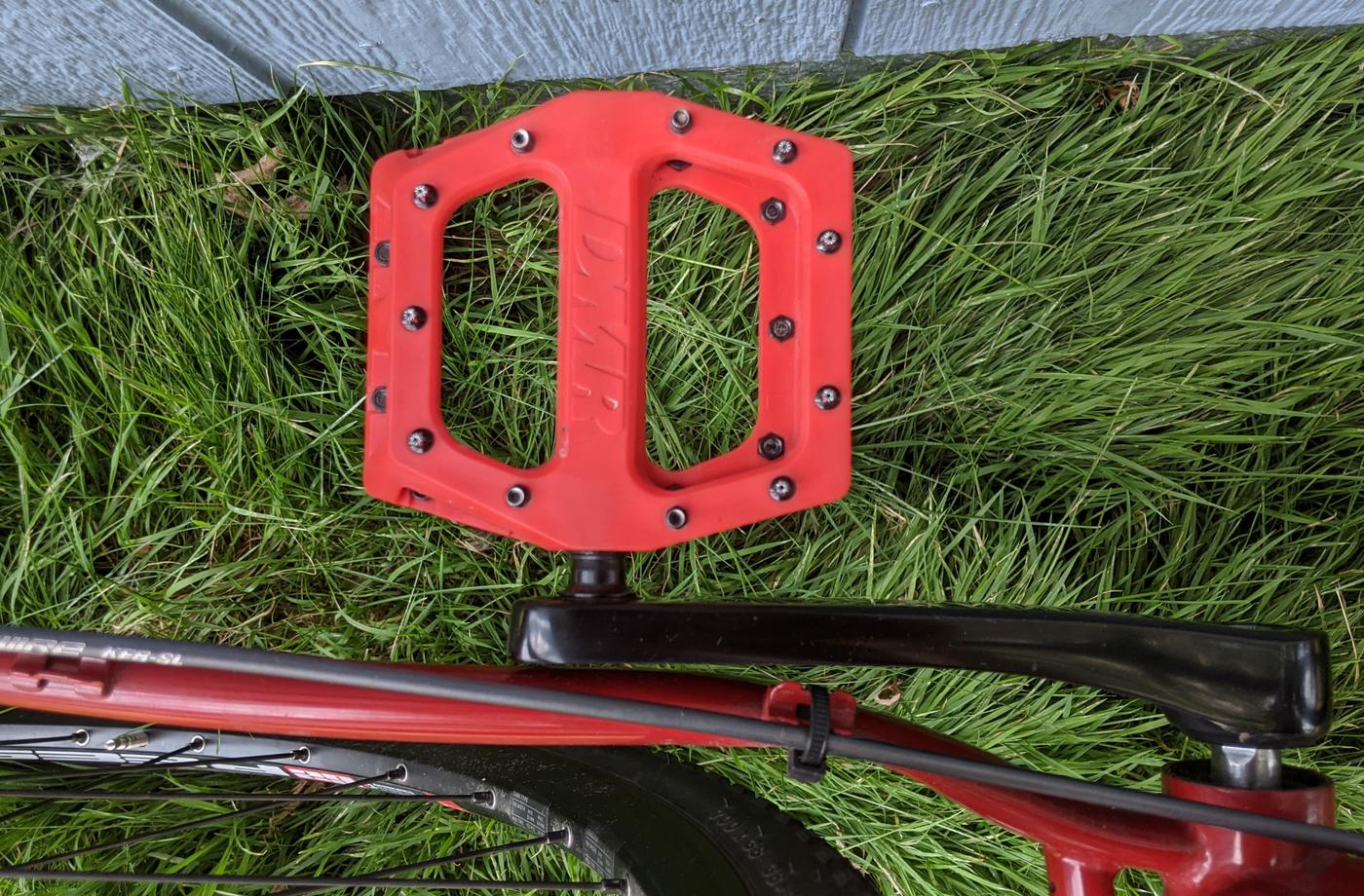 No low-trail bike would be complete without front luggage, so I added a lovely Pelago rack (RK2585) to carry some. The tires are Teravail Cannonballs (TR7240), on a random, mismatching QR wheelset. So, at the end of the day, did I accomplish what I set out to do? Most certainly! I ended up with a super-fun bike that’s easy to front-load and looks different from anything else on the road. It’s surprisingly comfy on longer rides.

Reflecting on the bike’s geometry, does low-trail have its merits? I think so, especially when the front rack is loaded. When it’s unloaded, though, I did experience that “floatiness” in the steering that bike reviewers talk about, and I can see where that can be off-putting to test-riding consumers not familiar with how these bikes are supposed to handle. I don’t think it’s ever going to be a best-selling geometry, and I get that.

In closing, I’ll leave you with the BikeInsights page with all the specs: 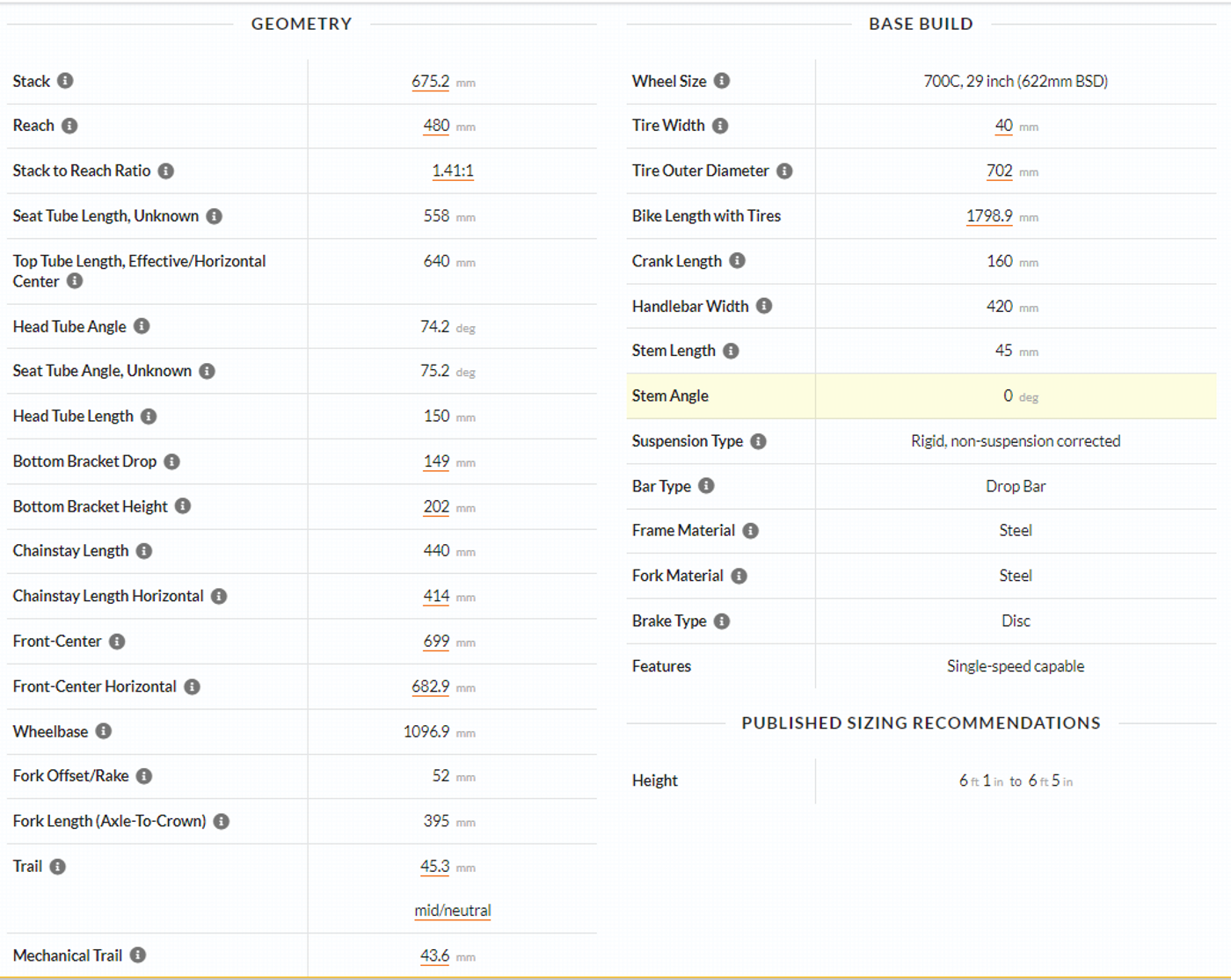