Japan. An incredibly diverse country, filled with a rich history, which up until the modernization of the automobile, relied heavily on the bicycle. In fact, from the 1930’s through the 1960’s the bicycle was the most prized possession in Japanese households. Naturally with modernization comes new technology and with new technology came more affordable cars, designed specifically for the Japanese consumers. Soon, the attention of the Japanese people shifted towards the automobile. Alas, the bicycle may have taken a blow in terms of popularity, but it’s hardly fallen off the map. Almost every household still relies on a bicycle. With fuel taxes double what we have in the USA and pricey annual inspection bills, many families still run errands on bicycles. In Nagoya, the wealthiest city in Japan, made possible by Toyota being located there, the bicycle can still be found on the streets and sidewalks in mass numbers.

If you visit Nagoya and wander into a bike shop, you’re unlikely to find the kinds of bikes we have here in the USA. You won’t see bikepacking rigs, or ‘cross bikes, or even steel road bikes. Sure, you might see a few carbon road bikes, but mostly you’ll see mamacharis, or the Japanese commuter bike. These bikes have low saddles, usually three speeds, kickstands, umbrella holders and large baskets for groceries. These bikes are tools for transport and are ubiquitous. Hardly the vessel that exudes recreation. What Nagoya lacks in a cycling culture, they make up for in the shear utilitarianism of mankind’s most effective form of transportation: the bicycle. This rich reliance on the bicycle, but lack of cycling culture is what inspired Shinya, the owner of Circles to create his own. After working in the fashion industry for years and traveling to the United States, he became enthralled with the small, intimate bike shops in San Francisco, Portland and other US-cities. Shinya wanted to create something similar in Nagoya, and since the Japanese market for framebuilding had fallen off over the years, he’d have to look to US builders, component manufacturers and apparel designers to invigorate Nagoya’s cyclists.

Now, you might be thinking that there are countless clothing and component manufacturers in Japan and you’re right. But remember, this was almost 10 years ago and many of them weren’t tuned into how the rest of the world used the bicycle as a vehicle for personal exploration. 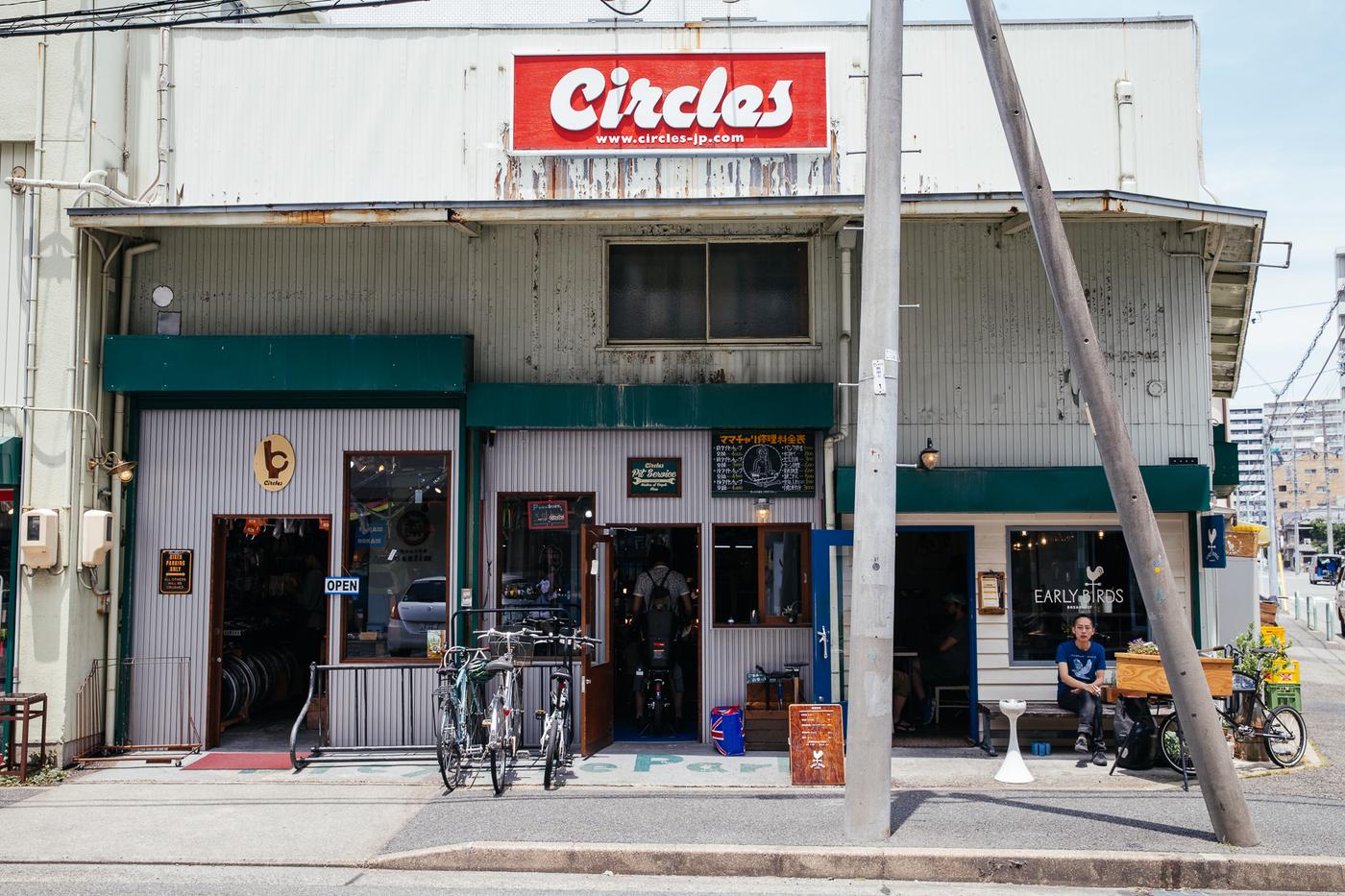 Shinya found a small warehouse space, opened Circles just outside the center city of Nagoya and began contacting, literally cold-calling framebuilders to place orders. Small batches of production frames at first and eventually larger numbers. He began building relationships with component and apparel manufacturers, importing their hard to find goods and selling them to not only the people of Nagoya, but visitors from all over Japan.

This slow, steady and piecemeal growth continued and offered Shinya the opportunity to grow what is now dubbed the Circles Family, a variety of companies all falling beneath the Circles Japan umbrella. There are many things in motion, but we’ll start with Sim Works. 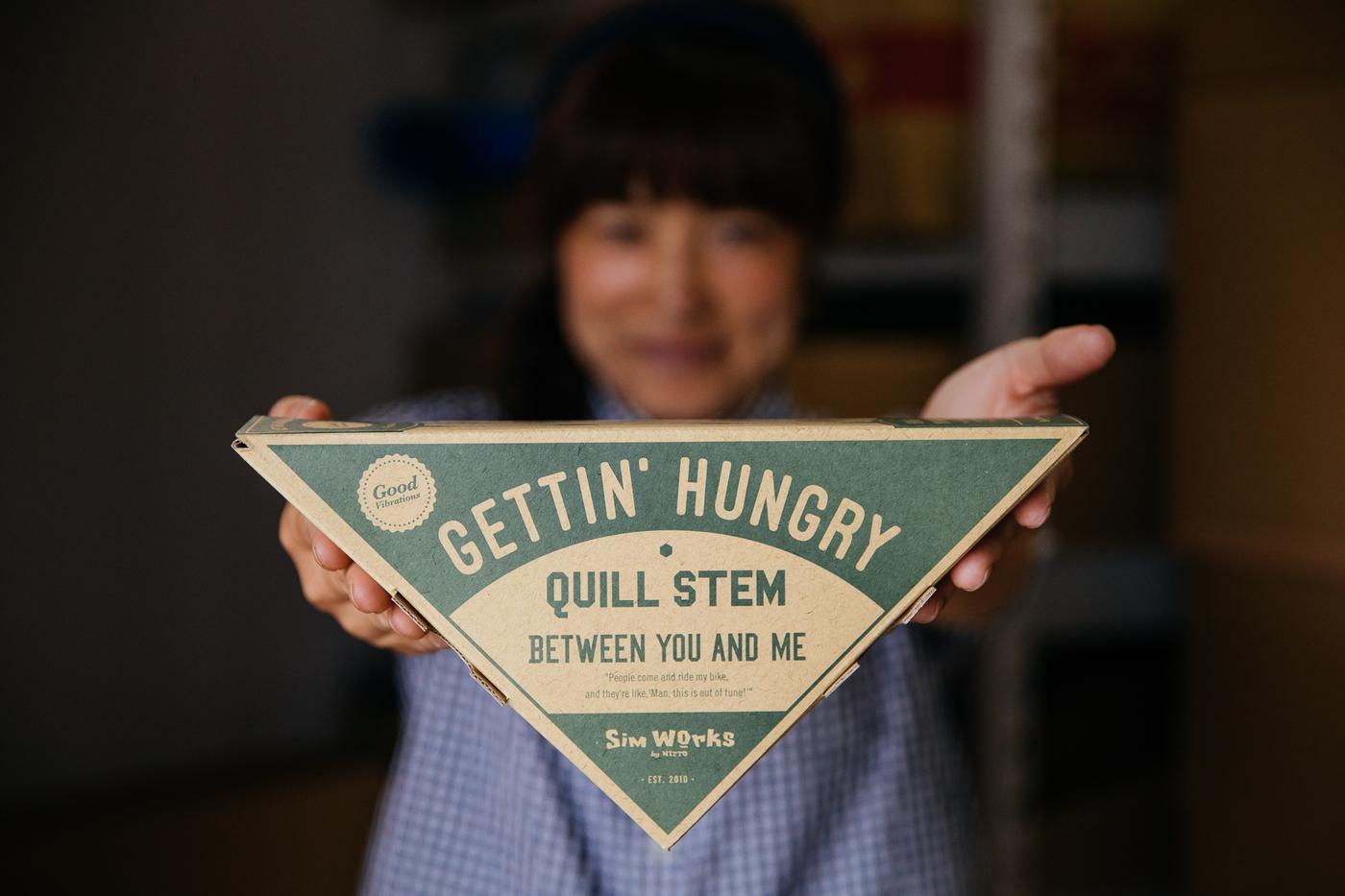 Sim Works: Between You and Me

We are all familiar with the shim. A thin piece of metal that sits between a handlebar and a stem, when their diameters don’t match. Shinya liked the shim as a metaphor, inspired by how such a small thing can make two important objects function. Sim Works is that shim (minus the H). Through using Nitto, Sim Works designs and manufacturers components in line with how many of the framebuilders, and consequently the Circles customers, ride their bikes. Classic, clean stems, funky bends in handlebars, seatposts with di2 batteries and unique racks, meant for multi-day tours are just some of the products Sim Works have developed over the years. Each component is named after some nuanced bit of pop culture, like a Beach Boys song and even the phrase “between you and me” comes from Yoda.

The success of Sim Works in Japan was almost immediate. To the point that Nitto, for the first time in years, was getting full on their production queues. Shinya was pushing tons of Japanese-made components, updated for modern riding and business was doing well. The small office upstairs in the Circles building was getting full.

As Sim Works continued to grow, the Circles Family decided it was time to bring on a new project… 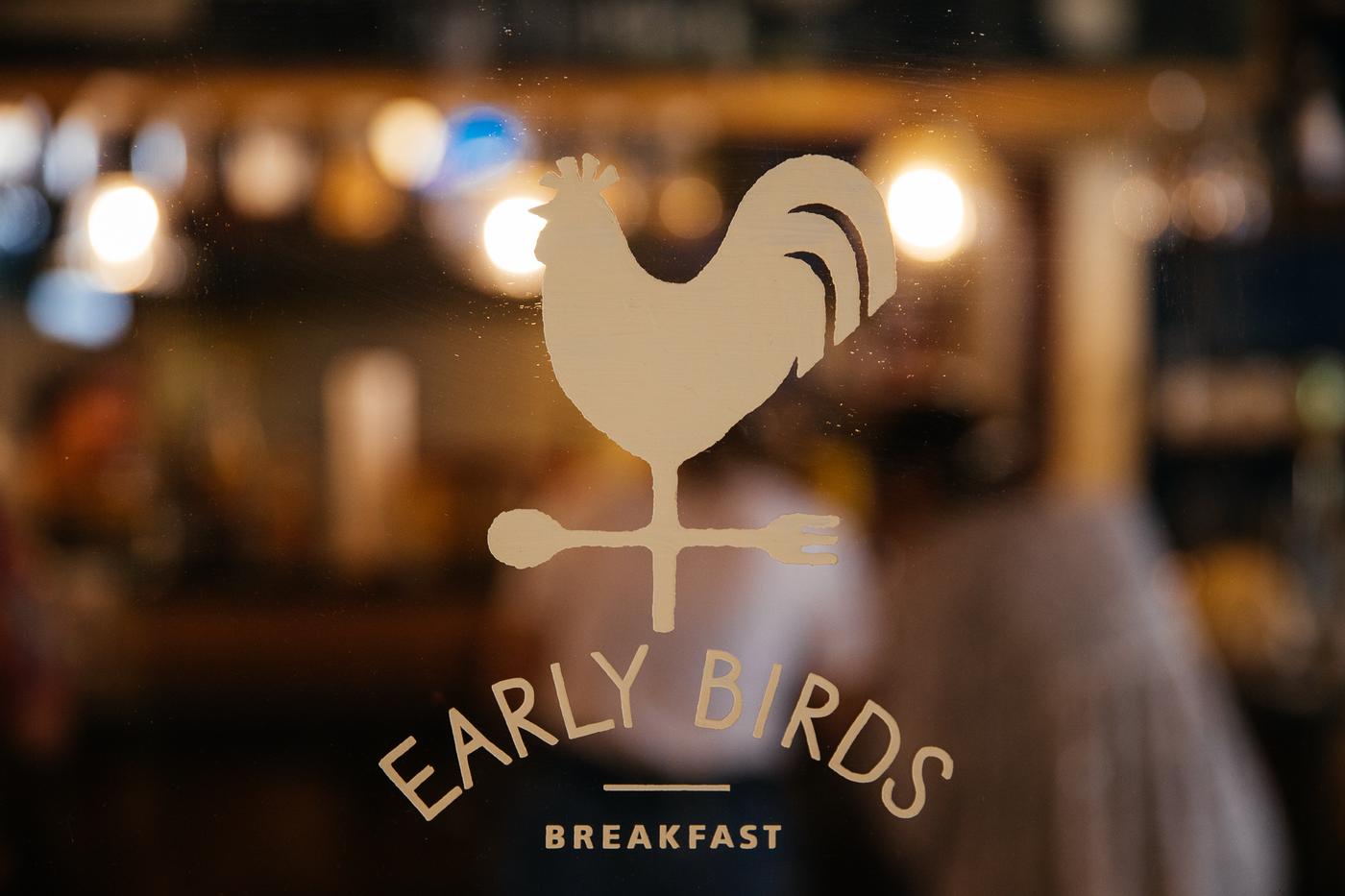 Japanese breakfast is unique, coming from a gaijin. Clams, salmon, rice. Not exactly what I like to eat before heading out on a bike ride. When Shinya was visiting the USA, he was introduced to American breakfasts all over the place. From breakfast tacos to biscuits and gravy, he was in love with it all. A friend of his, Keita, had a small cafe and Shinya offered to take him to America to sample the many delicious eating options, which ultimately would inform the menu of a new diner, attached to Circles. Open early on days which the shop is open and serving food until late, Early Birds attracts cyclists and tourists all day. As with just about any shop, the repairs department at Circles is the busiest operation in the building but it’s not all Hunter, Black Cat or Cielos looking for a tune up. A large number of the repairs are mamacharis being dropped off for repair. In an effort to help educate cyclists, ranging from housewives to kids building their first bike up, Shinya created Culture Club, a bicycle kitchen style co-op that serves as an educational facility for the Nagoya community.

Culture Club is only a mile or two from Circles, in an industrial part of town and takes up a nice footprint of a two story complex. It’s easy to access, filled with used and new components and best of all, a tool room, free to use. Bring in your old frame, or buy a new one and build it yourself, Culture Club is there for the curious cyclist. One of the more popular nights at Culture Club are the women’s workshops where female cyclists are taught how to wrench on their own bikes. 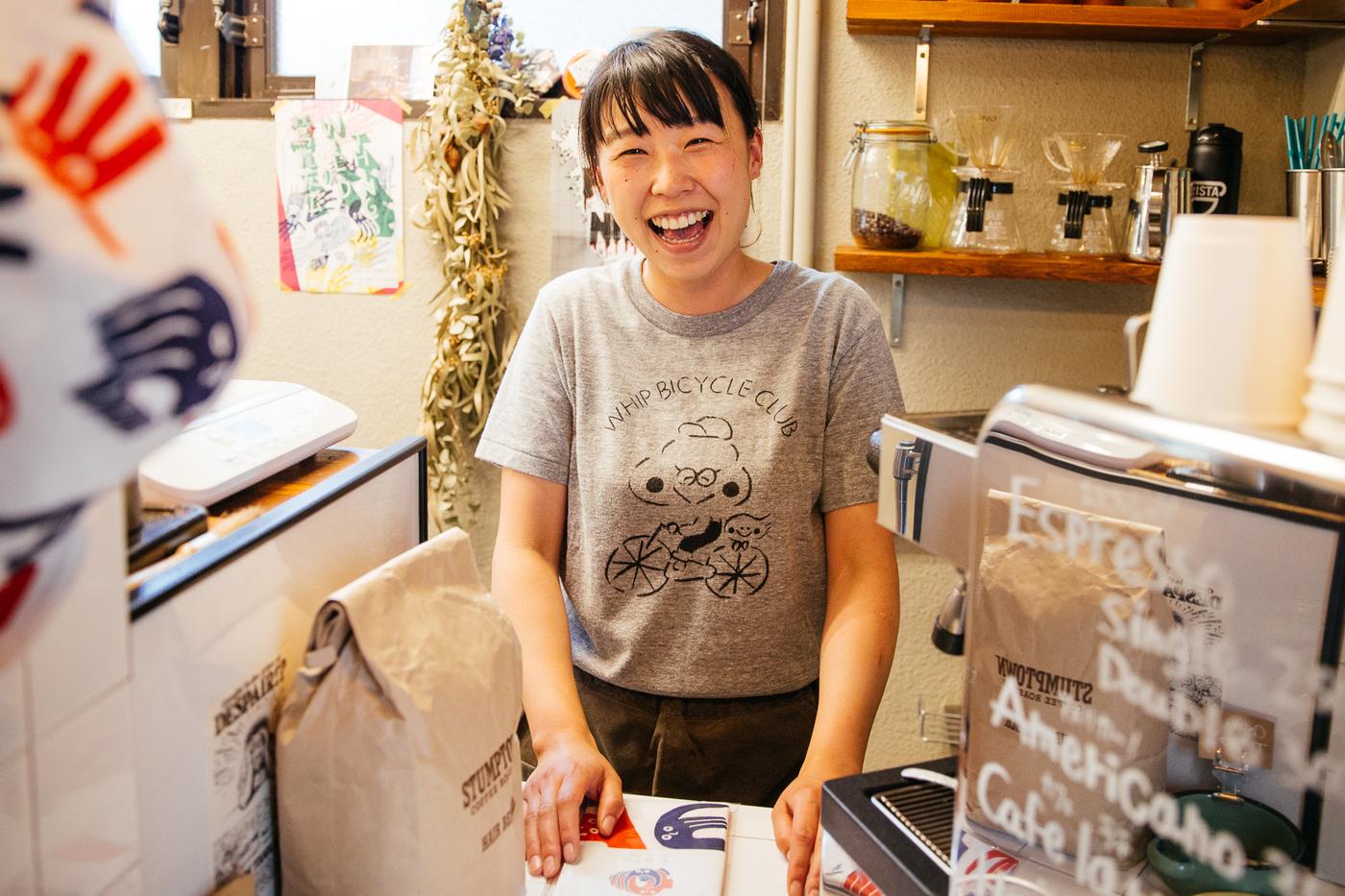 With the opening of Culture Club brought a new home for Sim Works’ office, design studio, and storage on the second floor and a coffee shop / bakery called Pine Fields Market. Pine Fields Market serves coffee and in-house cooked baked goods from the morning into the afternoon. Note the connection with food, coffee and bikes. It’s a no brainer! 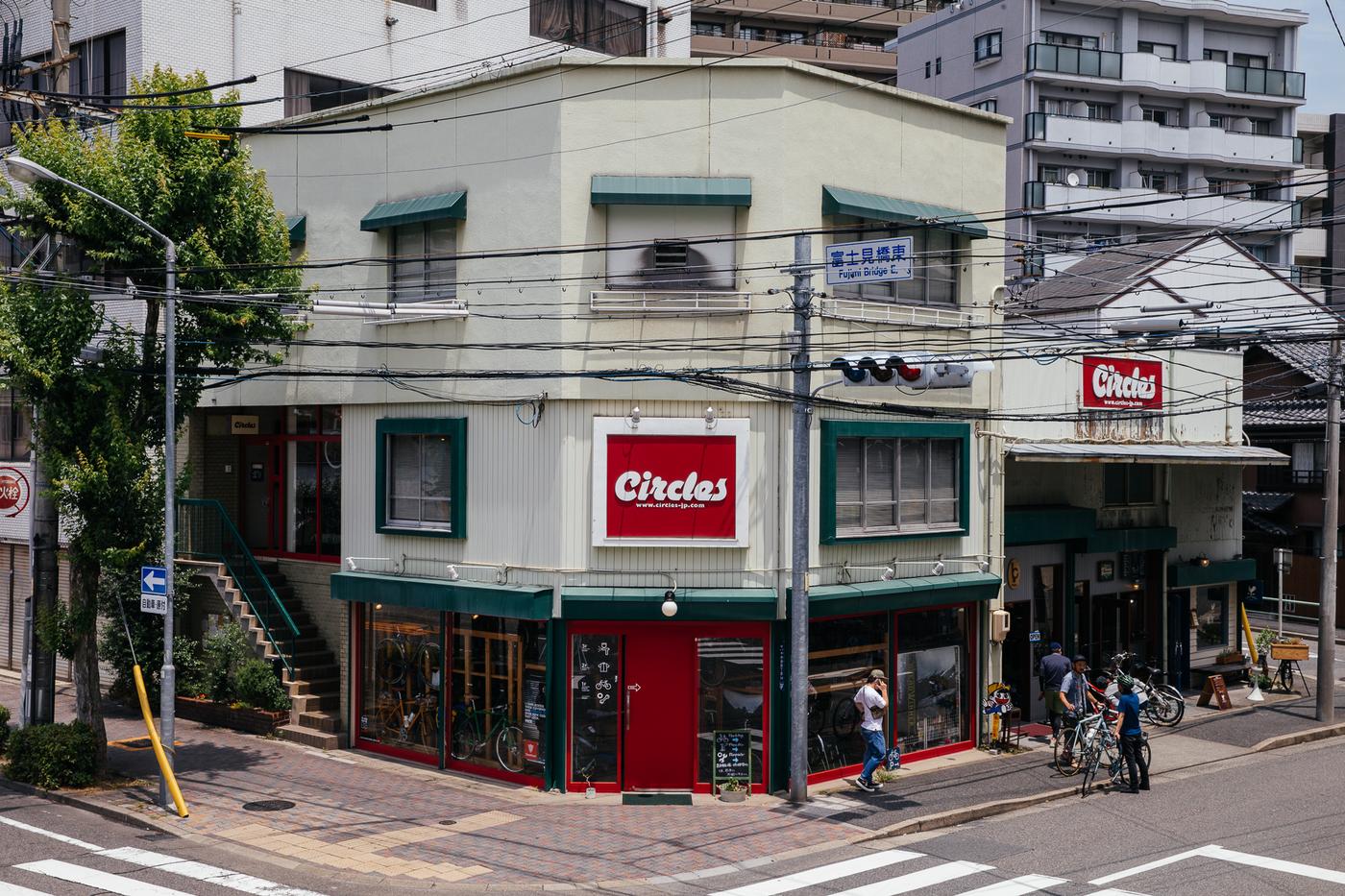 Many Wheels in Motion

Circles isn’t your ordinary bike shop. There are three entrances to three different kinds of shopping experiences: a commuter shop with parts, bikes and apparel, an outdoors section with camping, trail running and bikepacking gear, and a custom fit studio with high-end apparel, custom bicycle fittings and production framesets from US framebuilders. Each of these nodules have inspired and informed smaller brands within the overall Circles Family. For instance, there’s Sim Works, Well Done – a cap and bag maker, a custom paint studio where customers can choose to have their new frames painted and Ride Alive gear, camping and outdoors accessories. As each sub-brand grows, it finds more space somewhere in the umbrella and eventually becomes its own stand-alone operation. For instance, I have a pair of Ride Alive sunglasses that are made in Japan. These glasses, along with other gear, may or may not become a much larger picture at some point. Circles even uses a local screen printer and messenger service, Daisy Messenger to handle their shirts and local deliveries. 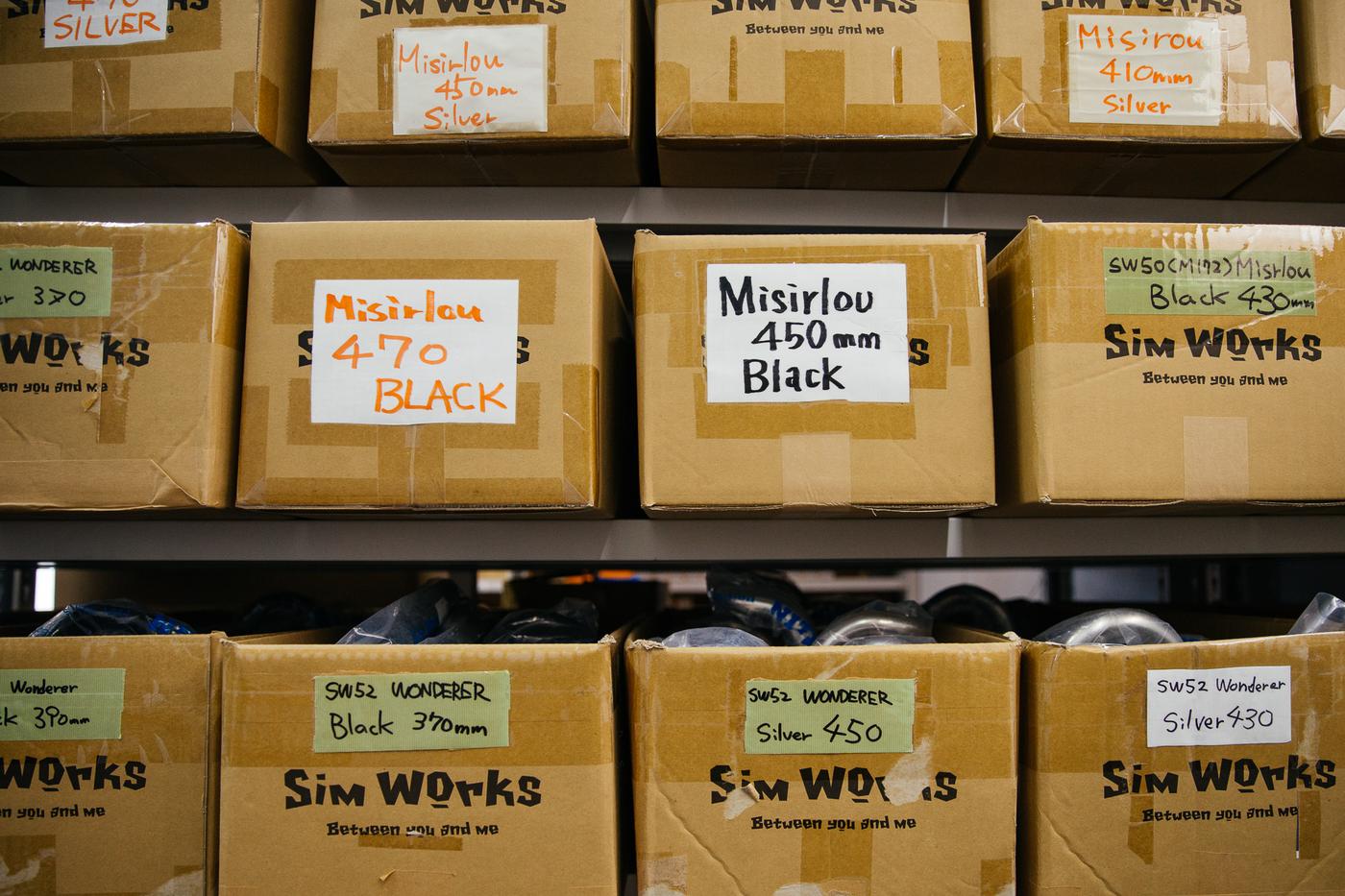 Success in the US Market

Sim Works USA has finally launched, bringing otherwise unobtainable Sim Works products to the States via a new office in Portland. Yep, that’s right. All of Sim Works’ components are currently being shipped to and set up in the new Portland studio. Pretty soon, your local shop will be able to order stock! This is just another example of how piecemeal growth enables the Circles Family to expand where its needed and in doing so, maintains a safe and hopefully successful business model. How Can Other Shops Learn from Circles?

In the US, as well as around the world, bike shops are struggling. The age of peg board and brick n mortar storefronts seemingly is coming to an end. Online sales are crippling shops and the bigger component and bicycle manufacturers aren’t helping. Shops like Circles have found success because they didn’t open their doors, only to stuff the walls with everything under the sun, they made a specific niche within an industry that was seemingly dead on the inside.

Shinya and everyone that works for the Circles Family knows that in order to pull in customers, your shop has to be a destination, offer unique products and most importantly, educate consumers on what exactly they need, without selling them products they’ll never use. The modern day bike shop needs to sell people an experience and allow customers to grow into cycling in a natural way. While it may be tempting to sell someone an expensive race bike for the margins, maybe the steel touring bike would set the hook, so to speak. 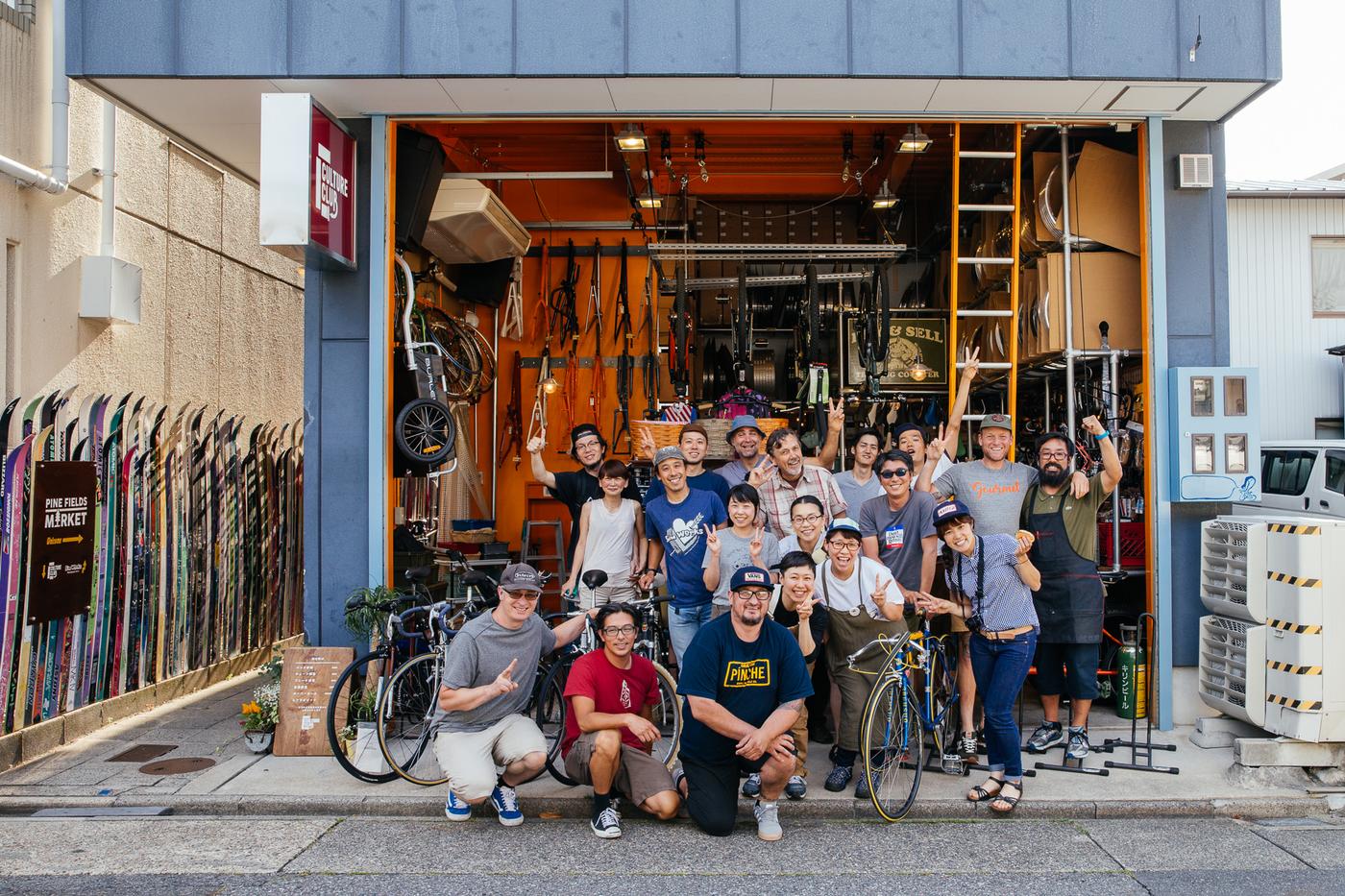 Thanks for coming along on this look inside Circles, its family and everything it takes to grow something unique and special. It was truly an honor to spend time in Japan with Circles, go on a cycling tour and even a Gourmet Century. If you find yourself in Japan, make sure you take a shinkansen to Nagoya and say hello to the Circles Family!