It was inevitable. Some might even call it destiny. All-City Cycles needs no introduction here on this website, and neither does the benefit of riding a steel hardtail mountain bike in an era of plastic full squish bikes. In fact, I’d argue that All-City’s latest offering, the Electric Queen, will not only please the readers of this site but could be the bike they’ve been looking for. Well, warriors, your search for a shreddable steel hardtail ends here. 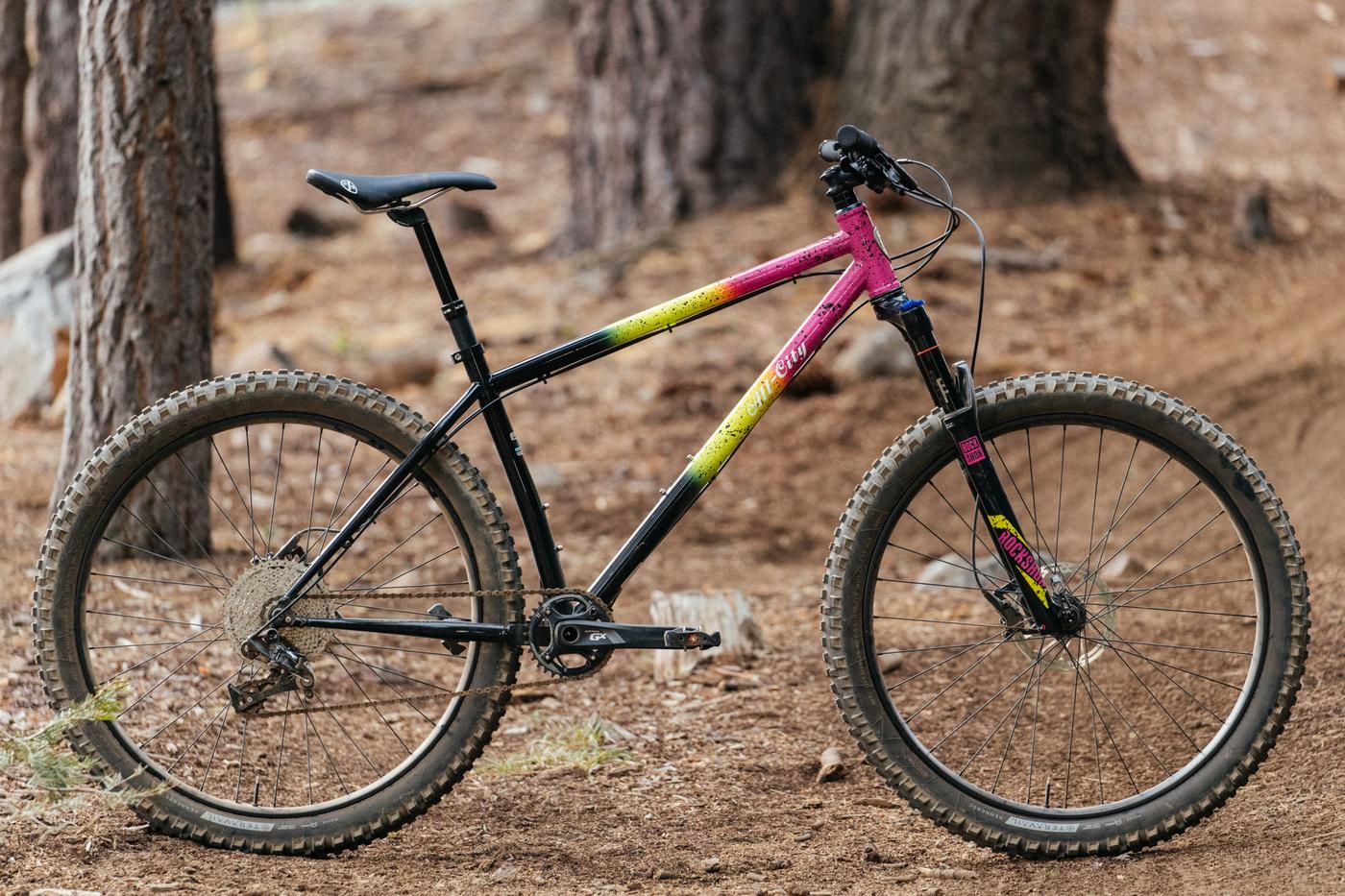 If there’s one thing I can say I admire about the cycling industry, it is its ability to take such a simple vehicle and push its capabilities more and more with each bit of technological advancement. Say what you will about boost, and plus tires, but they’re paramount to the survival of this vehicle, plus, they make it even more shredable. To the naked eye a hardtail might look simple, but there are a number of factors that need to be addressed to make the bike worth your time, and most importantly, your hard-earned money, especially around the Holidays! The angles have to be right, they have to have the right clearances and yeah, they gotta have style. Most importantly, however, is the sizing. The Electric Queen comes in X-Small through X-Large. 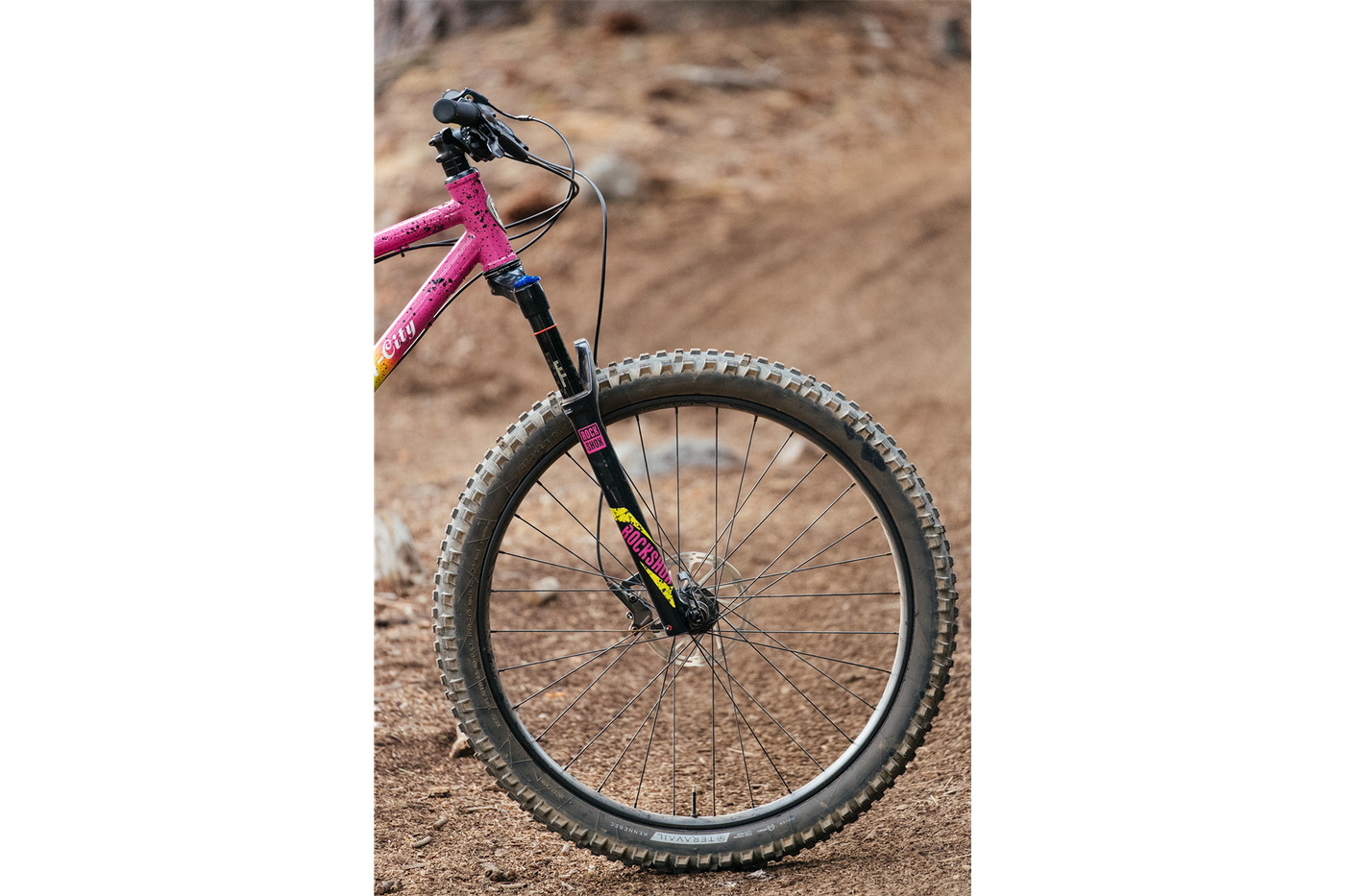 Break Out Your Protractor

Angles, angles, angles. Slacker isn’t always better, longer and lower doesn’t necessarily make a better bike and if the bottom bracket drops too much, you’re in for a bummer ride. The Electric Queen plays it safe with all the above areas, avoiding the tendency to push the head tube angle too much. Instead, the designers at All-City landed on a 67.5º and 67.6º HTA across the size run, with a 120mm fork. I’ve found the slacker you go with this measurement, the better it is going straight down, at speed, but you lose a lot of the responsive handling most people’s trails are best suited for. The same can be said for bottom bracket drop. Lower it too much and it’ll make things like airs and hops a bit more difficult, or you’ll be smashing your pedals on rocks all the time. For that dimension, the bike hangs around 38.8mm for the medium, and shifts slightly throughout the sizes. Not too low and not too high. Perfect? For this bike, I’d say so.

Since the 27.5+ platform accommodates 29er wheels as well, the chainstays had to be prepared for the riders who will always try to cram the biggest 29er tire into the rear end. While I’ve ridden a fair amount of 420mm chainstay 29er hardtails, I always feel like 425mm is the way to go. Coincidentally, that’s where the Electric Queen lies. This results in a wheelbase that’s still tight with extra room, without venturing into XC territory. Kinda like sweatpants. Tight when you need them, but with room to spare for when you hit that technical and steep descent, or a plate full of stuffing and turkey. Other riders look to various other dimensions, but for me, those three areas quickly weed out look-alikes and wannabes. They’re the difference between a MTB company that has to have a hardtail in their lineup, and a company that wants the only MTB in their lineup to be a veritable singletrack slayer. 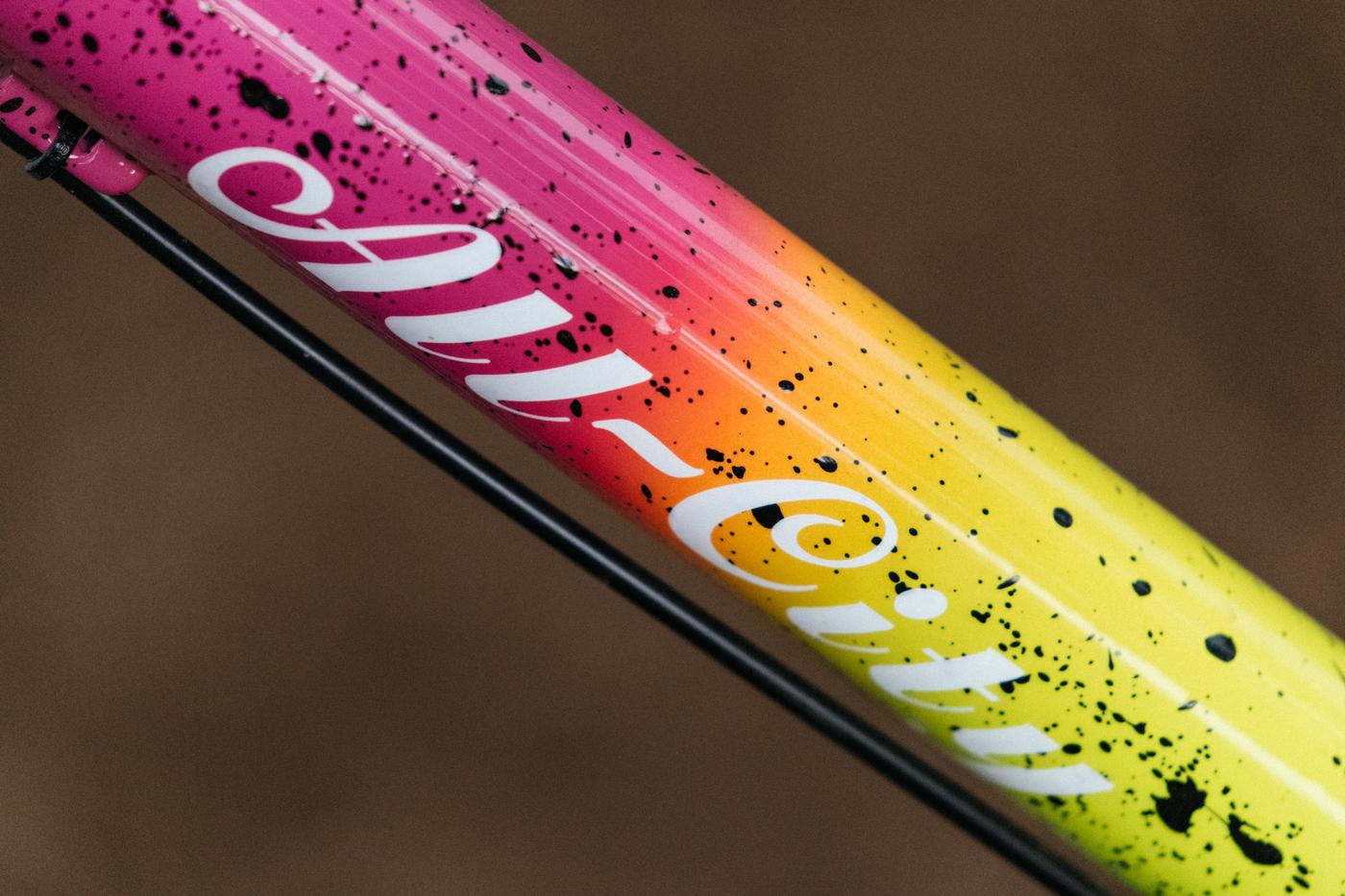 Ombré, splatter, and neon. What could go wrong? All-City is known for great color combinations, or should I say polarizing paint designs. People either love it or hate it and will always make their opinion known in the comments. Let me tell ya when people complain, you know you’re doing something right. As for the Electric Queen, I’d call this paint job a win. The rear half of the bike is black and the front half is loud and ready to party. It’s almost like the bike was baked during supersonic travel and then covered in splatters. The decals on the Reba fork even match. 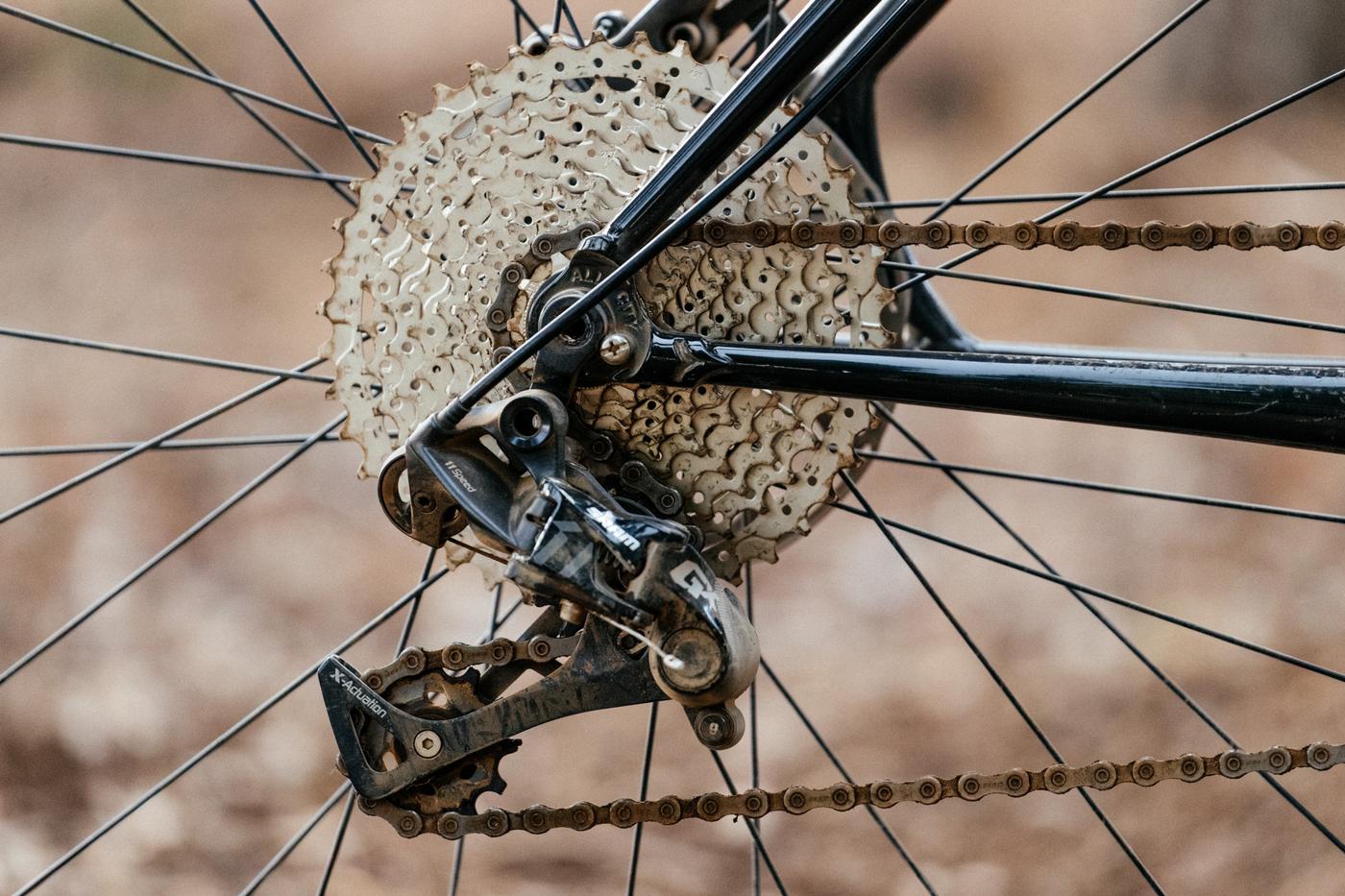 Building a complete MTB is something new for All-City and I’d go out on a limb and say, they did a great job, knowing what is currently being offered in the industry. SRAM’s GX group is a no-brainer. It offers all the functionality of their other platforms, at a fraction of the cost of XX1 Eagle. All-City kept the rest of the specs loyal to SRAM, too. With a RockShox Reba RL 120mm fork and SRAM Level brakes with 160mm Centerline Rotors. Over the years, SRAM’s Guide brakes have had some issues, ok, a lot of issues, but the latest run has seemingly resolved them and even if something does happen to your new MTB’s brakes, SRAM’s warranty department is ON IT. 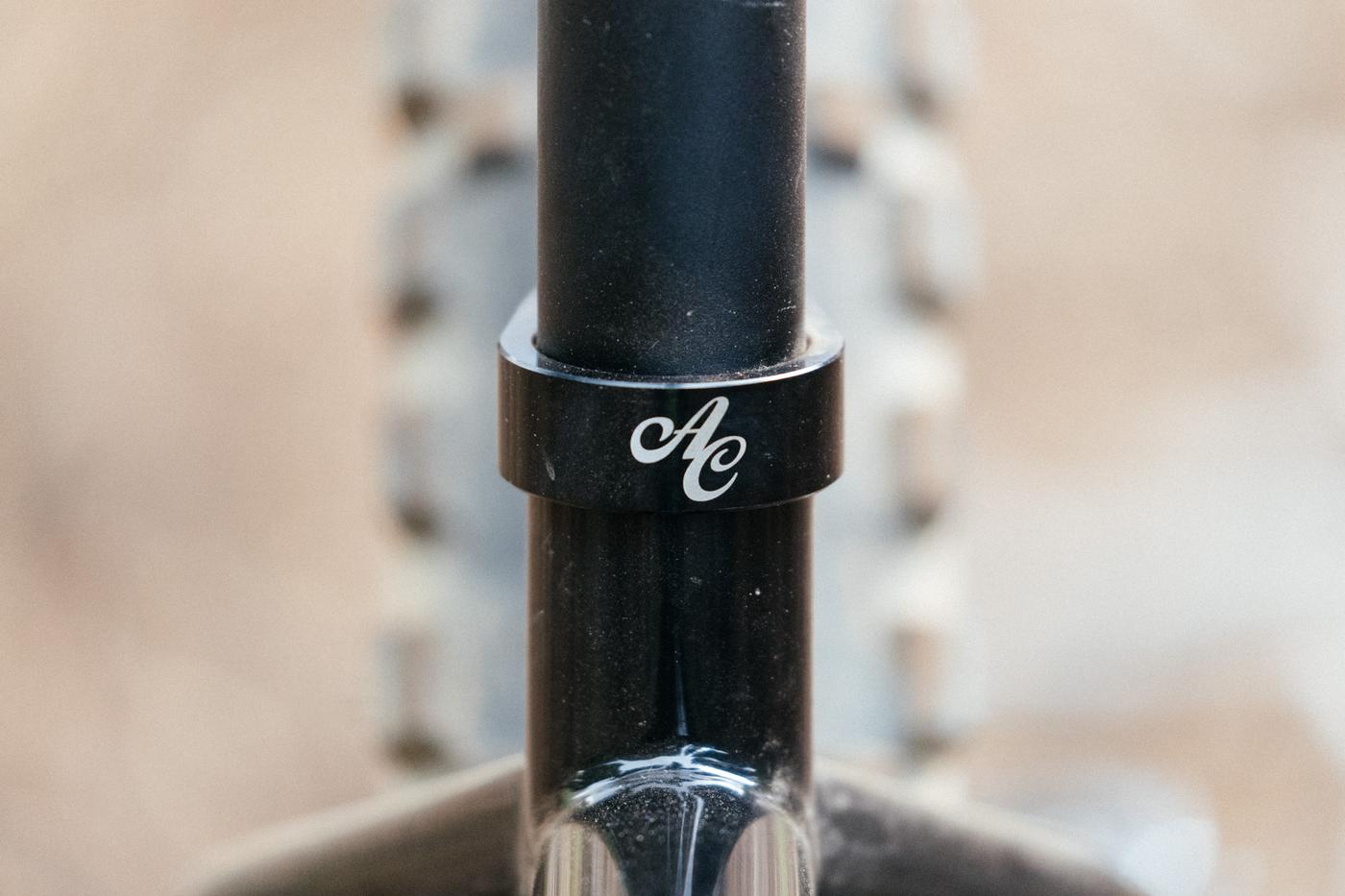 While the model I rode and reviewed came with a dropper, the Electric Queen comes spec’d with a Promax post. Nothing special by any means and one thing that is a fortunate by-product of All-City removing their fancy seat tube cluster lug from the Electric Queen is the ability to run a QR seatpost collar. Smart thinkin’, team! For those who will be putting a dropper in, there’s even an internal routing port. 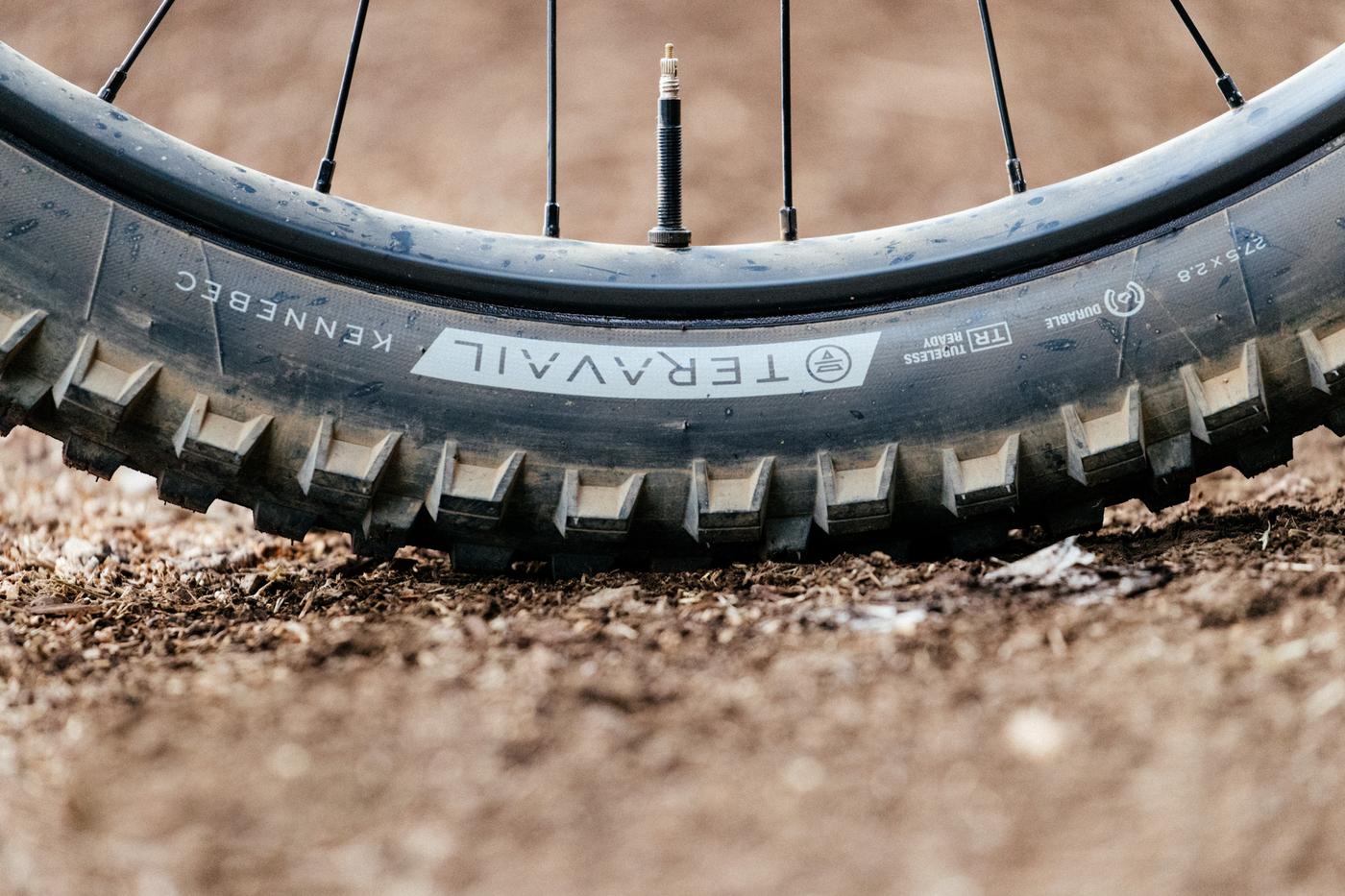 Wheels can make or break a complete build and while the Electric Queen can take either 27.5 or 29er wheels, they come stocked with the smaller diameter option. Why? Because a 27.5+ tire on a hardtail is just better, IMO. Sure, people have opinions on either side, but having tried both wheel sizes on my personal bikes, I always come back around to a higher-volume, lower-pressure tire for my trails. Now, if you’re planning on racing the Electric Queen, you might be swapping out the trail wheels for a lighter 29er race wheelset and tire package, but that’s all on you. For those of you concerned with dropping extra dough on a new wheelset right out of the gate, hold your horses. The Electric Queen comes spec’d with Novatec hubs to WTB Scraper i40, 27.5, 32h rims. I’ve had good luck with the Scrapers and found them to be more dent resilient than other wide rim options. Plus, the bigger tires help in the dent-free longevity of your bike’s wheels. Of course, if you case something hard, don’t go crying to the warranty department. That’s all on you, pardner. 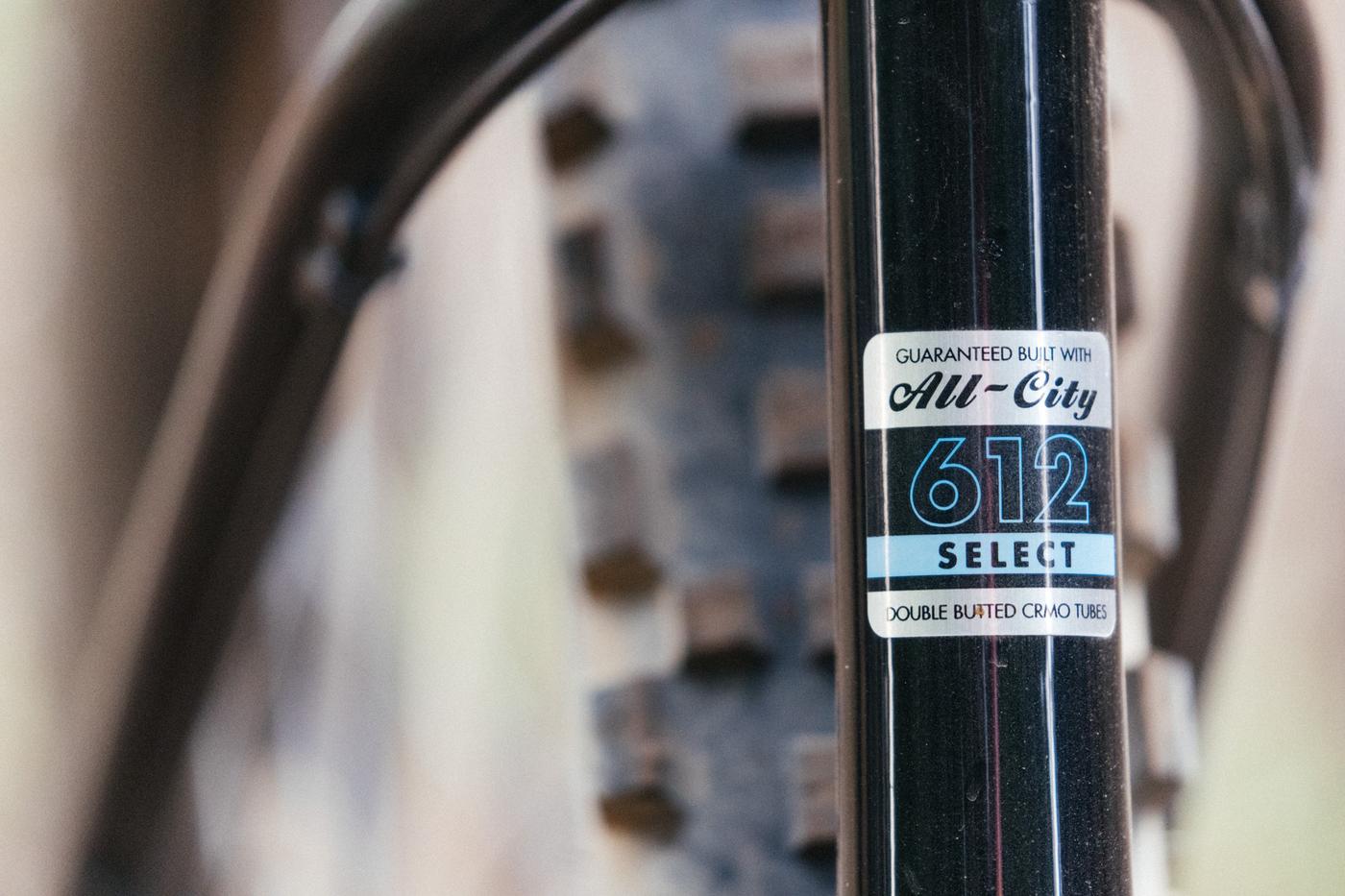 Tubing is a defining factor in what separates All-City from a Surly and that’s not meant as a dig. All-City just puts a value on making a strong, safe and light tubeset. Making a mountain bike is tough when it comes to passing consumer safety testing. They have to run even their cyclocross frames through this rigorous exercise, so when it came to their new mountain bike, All-City made sure to utilize their new 612 Select tubeset. Is the bike heavy? Not at all. Is it light? Not at all. It’s right there in the middle, like all of All-City’s products. There are always lighter options out there, with any bike, but you’ll pay for it. 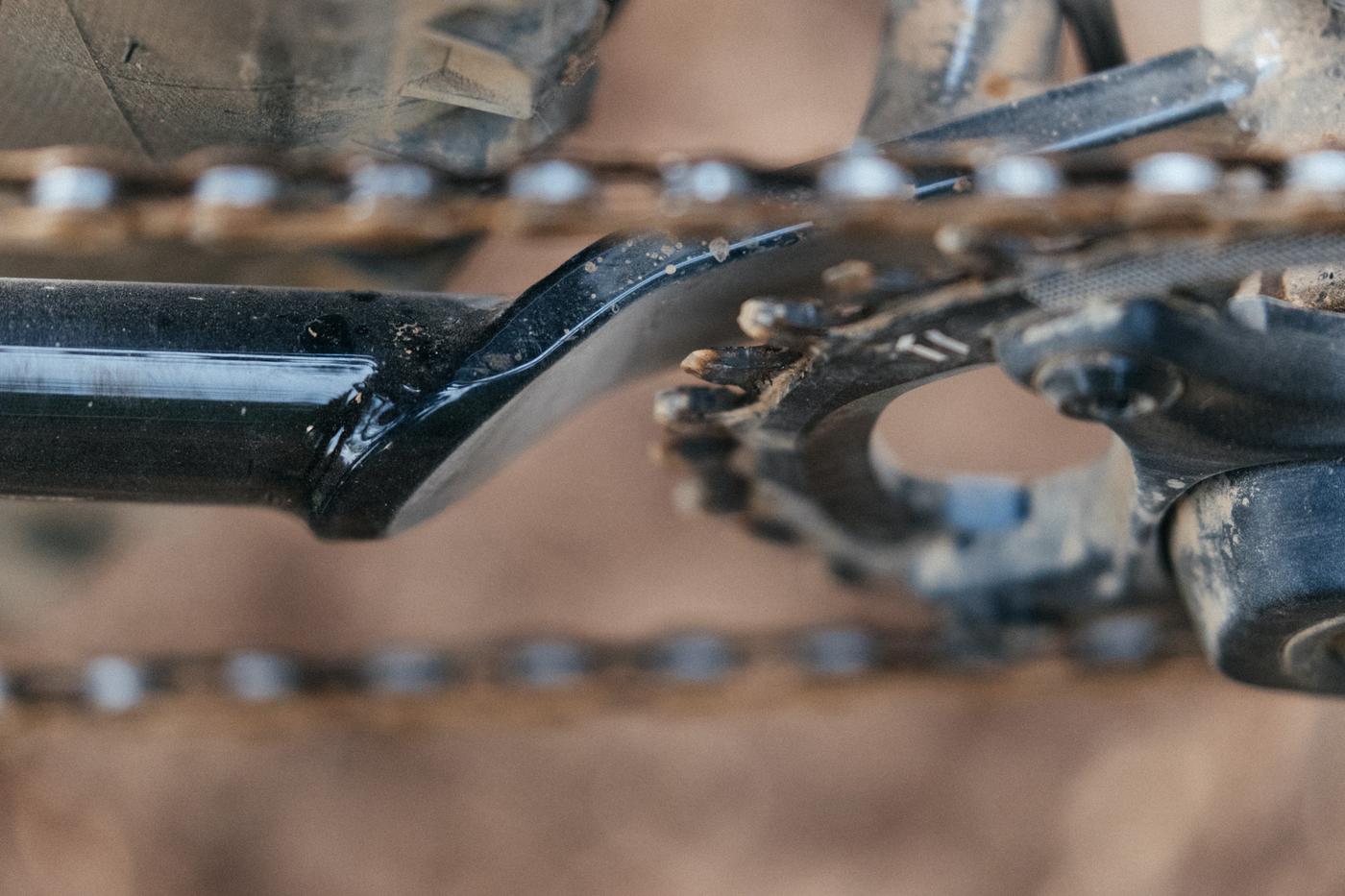 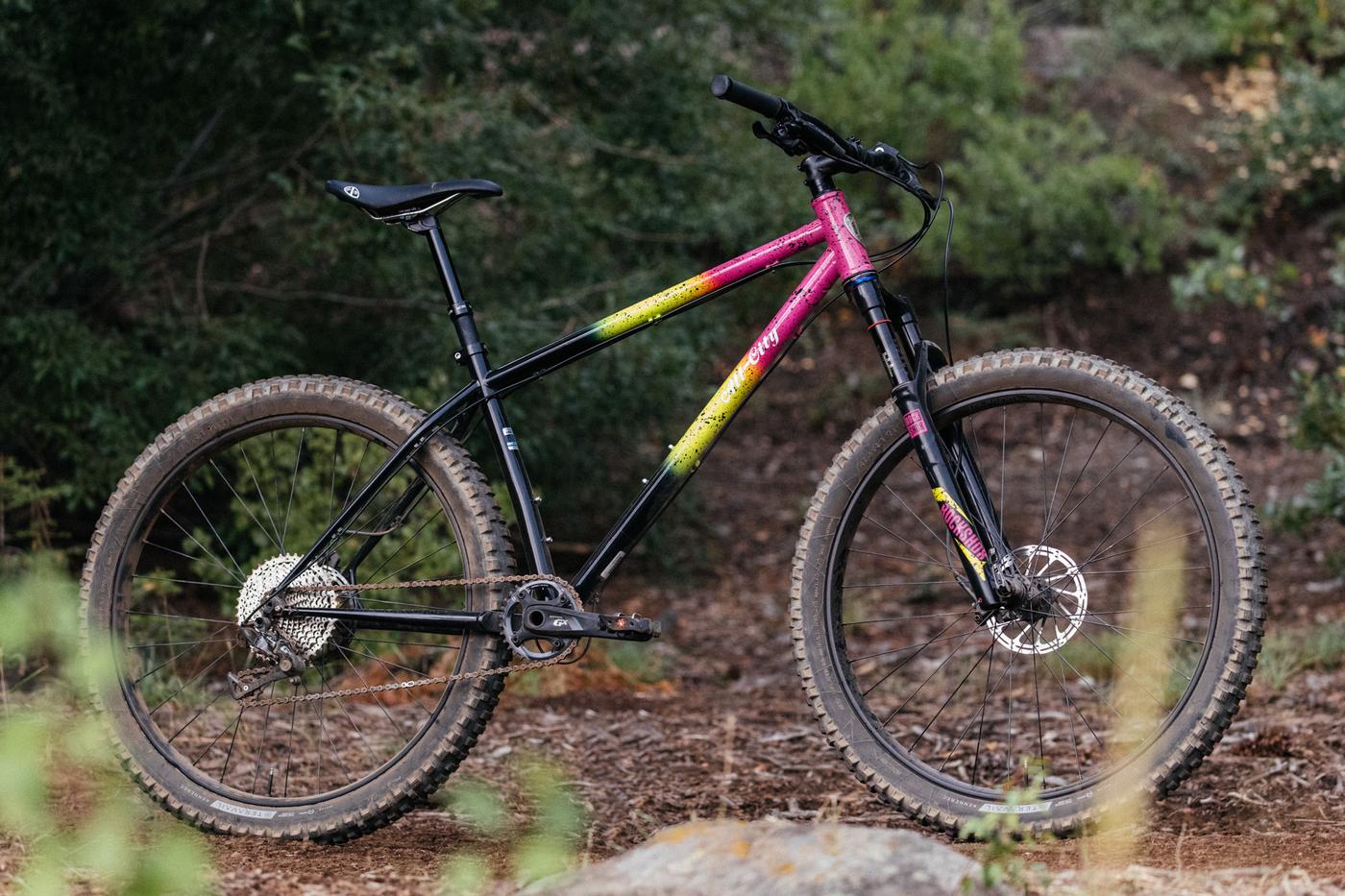 I’m a bad person to review hardtail mountain bikes. I usually take a look at the geo sheet and formulate my opinion before even throwing a leg over the bike. While I was stoked to see the Electric Queen’s unveiling, I’ll admit, even I thought I knew how it’d ride. To be honest, I was really surprised, even stacking this bike’s capabilities against my other, longer travel hardtails. 120mm ain’t a lot for 27.5 wheels, but I never felt like I needed more travel. In fact, I kinda preferred it at the end of the run in NorthStar and at my home trails. I’m also the guy that can have fun on a rigid though, hence my apprehension when reviewing bikes. Just because I had fun on something, doesn’t mean everyone will. Yet, I’d throw it in there and say the Electric Queen will impress first-time mountain bike riders, along with seasoned shred heads. 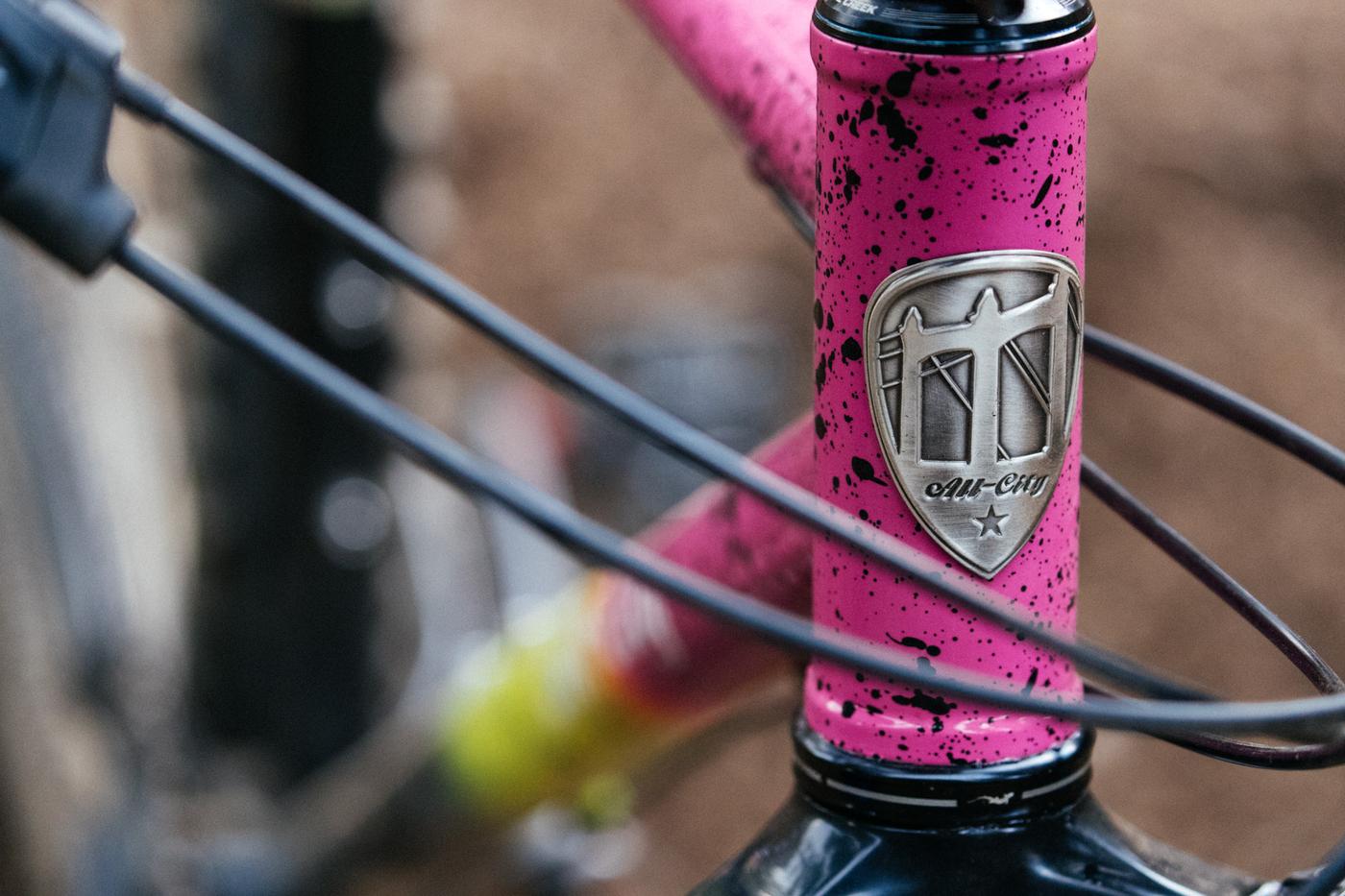 Not bad, even a stoner trail wizard could afford it. See more specs, numbers and charts at All-City.

Head to your local All-City dealer to pre-order and if you have any questions, holler in the comments!