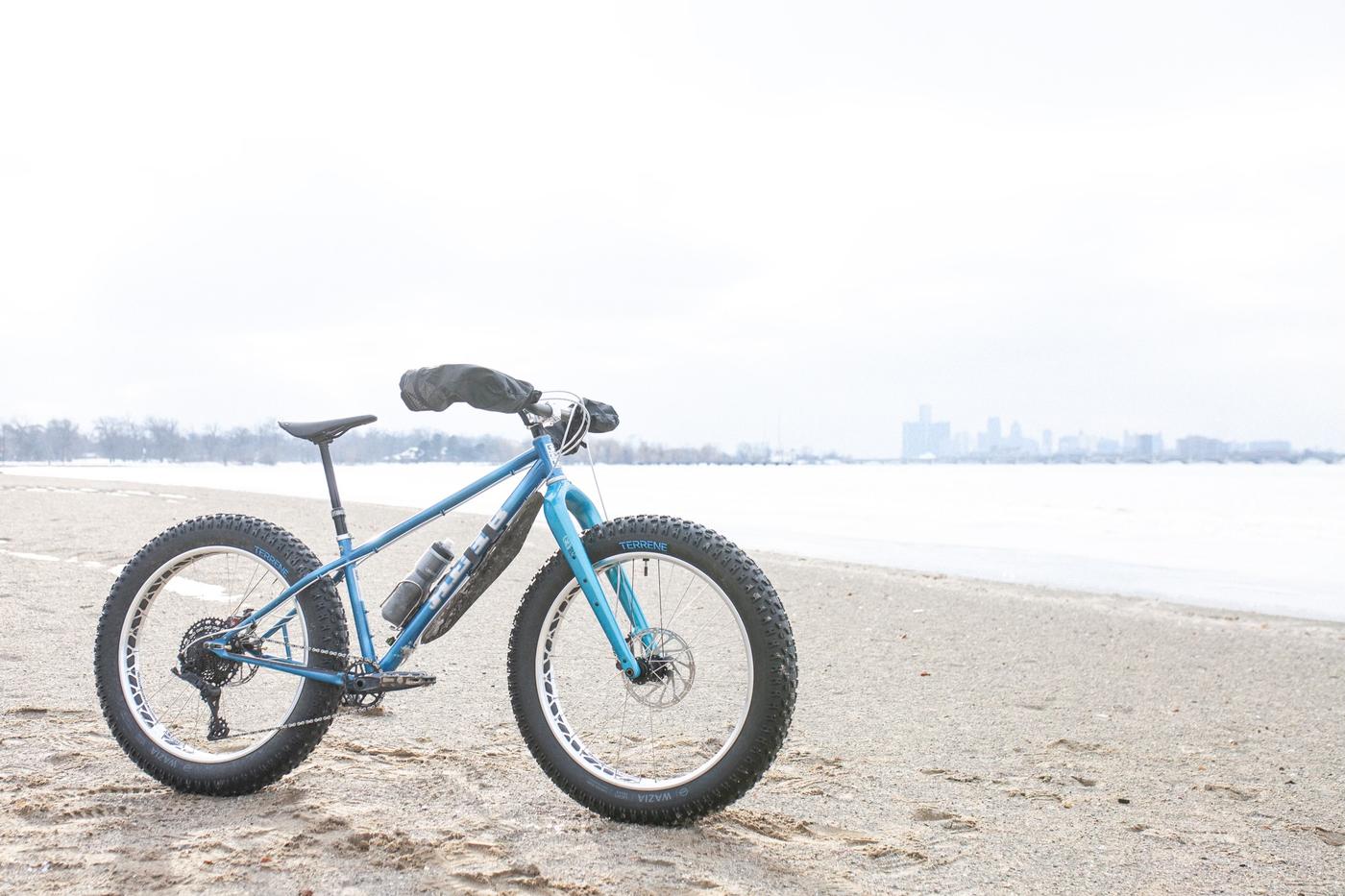 Fatbikes aren’t going anywhere. Well, that’s not true. Fatbikes go everywhere in the winter months in cold and snowy places. This week’s Readers’ Rides features Peter’s REEB Donkadonk, with a lengthy write-up by Peter, so let’s get to it!

Hey Radavist crew. I just got my goldilocks ATB / XC / fat / super-fun-time bike in the mail from REEB, and it just got a really special photoshoot from the one and only Blake Yard, so I thought what better time to reach out to you all with a reader ride? I’ve been eyeing REEB bikes ever since I saw Jeff Lenosky’s YouTube channel. Once I started seeing prototypes of their SST I got really interested in their bikes. I’m not dead set on MUSA bikes (my other bikes are a Starling and Stooge), but the REEB crew just seemed to be doing something really special over in Colorado. So I decided to take the plunge on the frame despite never getting any saddle time on it. Believe it or not Metro Detroit (where I live and ride) has a surprising amount of really fun singletrack. I’ve had friends visit from Asheville, Santa Cruz, Park City, and beyond say the same thing. We don’t get any significant climbs or descents, but everything is punchy, the turns are fun, and you get a lot of “bang for your buck” out on your rides. We need more jumps and drops, but we’re working on it. Around here it’s not one of those spiritual multi-hour riding experiences like out in Pisgah or the like, so you can just get on your bike and start smashing turns right out of the trailhead. But I think our terrain is more fun with slightly different-from-the-norm bike builds than what you can usually find off the shelf. Everything we ride is XC and XC-adjacent so you want fast rolling tires. Our elevation comes from glacial kames (i.e. sand deposits) and our trails are twisty-turny, so having 2.6″+ tires with some knobs for cornering are welcome when you’re trying to not touch your brakes on the descents. We also have a lot of gravel, greenway, and easier “ATB” style trails that connect our singletrack, so I didn’t want a pig of a bike on the paved and flat bits. We also get a lot of snow (of various depth and quality), so the bike had to be able to run fat tires. Previously I had a Canfield Nimble 9, which is a brilliant singletrack slayer but felt a little bit big when I wasn’t traveling deeper into the hills or mountains. I also had a Surly Pugsley, which I still love to this day, but it feels a little sketchy on the chunky steeps. I loved how the Nimble 9 carved corners and took on tech with ease, and I loved how stout and upright the Pugsley was. Enter the REEB Donkadonk: my goldilocks bike. With fat tires (pictured) it’s been a riot on the hardpack snow. With 29 x 2.6″ tires (not pictured) the bike becomes a brilliant rigid MTB/ATB/enter-bike-genre-here that feels plenty composed on the bumpy fall lines, and it carves our sweet sweeping turns without the twitchy front end I had on my Pugsley. It’s also equally fun when you’re rambling around on gravel and paved roads to get to more of the spicy stuff. Onto the build: my friends say I have rather, uh, unconventional build preferences on my bikes. They joke that I should start a YouTube channel called “Will It Shift?” because I’ve been known to bodge various brand cassettes, derailleurs, shifters, and chains together. I think this came from me learning how to wrench on my bikes during the pandemic (thanks to egregious bike shop wait times), and therefore wanting as little faff as possible. So for my Donk I knew I wanted it to be rigid, 10 speed, cable brakes, and single-speedable. I’m a huge fan of the range of the Microshift Advent X cassette. But instead of running their shifter and derailleur, I was convinced by Path Less Pedaled Discord legend @drwelby that the ball-on-a-budget power move is to run an 11 or 12 speed Shimano derailleur paired with a Shimano Zee or Saint (if u fancy) 10 speed shifter. Compared to the Advent X shifter the Zee/Saint shifter has a lovely light crisp action, and bigger more ergonomic levers. And the Shimano derailleurs have a much stronger clutch than the Advent X, which perhaps isn’t necessary on an ATB/XC kind of build but still a welcome addition, especially given that there’s no real price difference between the two brands. I also went for a 30 tooth oval chainring because it was in my parts bin, and 165mm cranks because #shortcrankssavelives. 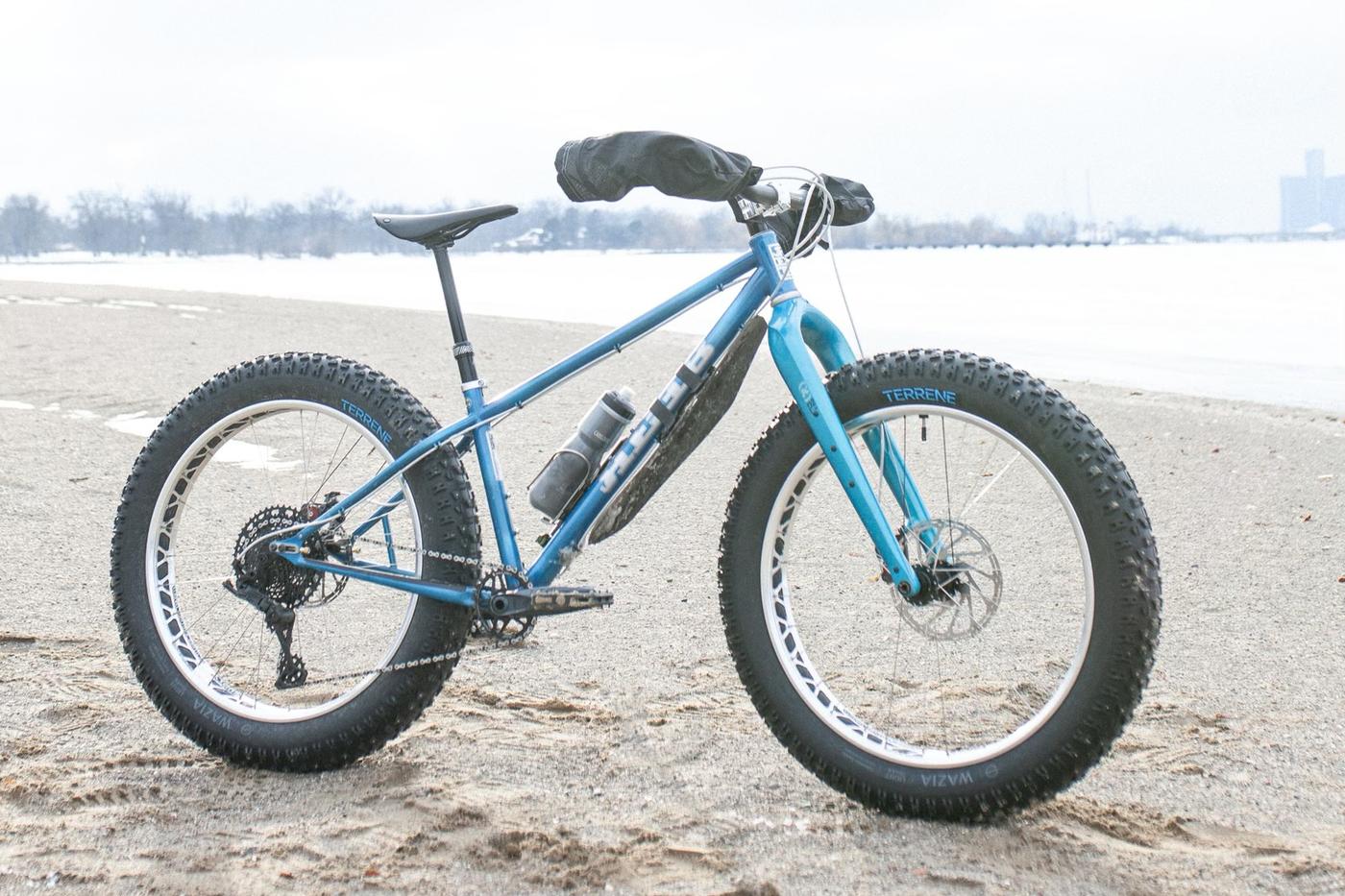 I’m a huge fan of what Andy at Stooge is doing, so I knew I needed to run Stooge Moto bars on this build. Truth be told I started this fat/ATB/XC search trying to get a Stooge R-Buckle, but as the Brits say, “they’re rarer than hen’s teeth.” The Moto bars are comfortable but confidence inspiring when descending. Not too much or too little sweep. I went for a polished Paul Boxcar stem because you spend a lot of time looking at your stem so why not bling it out a little bit. In keeping with the “easy to service” mantra I’m running Avid BB-7 that a friend gave me when he switched to hydros. I find they work very well for anything outside of extremely high performance riding as long as you run compressionless housing and good cables. Having 200/180mm rotors doesn’t hurt either.

I may sound like a retrogrouch a bit but I can assure you I’m not– so the bike has a PNW 170mm dropper post. REEB built the standover really low, which is awesome when you inevitably biff in deep snow and try to get back on your bike. I’m pretty sure I could fit a 200mm post, which is crazy for a size medium. The wheels were built by my buddy and wheel building sensei @scottyscreaming over at Cycletherapy. The fork is a Kona Wo fork that drwelby laced me up with for a screaming deal, and it’s so close to the color of the frame it’s kind of unbelievable. I’m considering a metal fork one day but so far this is great. And the last bit that goes on every single one of my bikes that gets ridden in the woods is LoamLabs Counterpunch grips. I’ve already gotten one boxer fracture, so no need to do that again. Not to mention the grips themselves feel incredible. Unfortunately it’s pretty hard to find fat and plus parts right now, which is a real shame. I started amassing the new parts for this build back in March 2022 when Terrene did their giant tire sale. In order to get those 165mm cranks I had to buy them from a Canadian retailer and ship them to a friend across the border in Windsor. Windsor is lovingly called “South Detroit” so I lucked out that I was able to pick them up from her. The polished silver Surly hoops were the result of 3 purchase attempts and going 10 pages deep into Google search results– the first 2 orders were canceled because they weren’t actually in stock. When the 3rd order showed up the hoops were so dusty that I’m pretty sure the shop forgot they had them in their rafters.

Once Scotty and I put it all together we realized I accidentally went hard with the Detroit Lions colorway vibes. But considering this was the best season the Lions have had in my lifetime I’m pretty stoked on that.

Thanks for listening to my ramblings about the bike that will probably see the most saddle time for the foreseeable future. So far it’s been so much fun in both 26″ fat and 29″ mode, and I’m stoked to continue to maximize my fun per hour on it!