Mountain Goat was one of the original MTB brands based out of Chico, California. A few weeks ago we looked at John’s 1984 Whiskeytown Racer, which prompted Kees to send in his 2008 Mountain Goat WTR, built by Jeremy Sycip for Mountain Goat. Let’s check it out below! 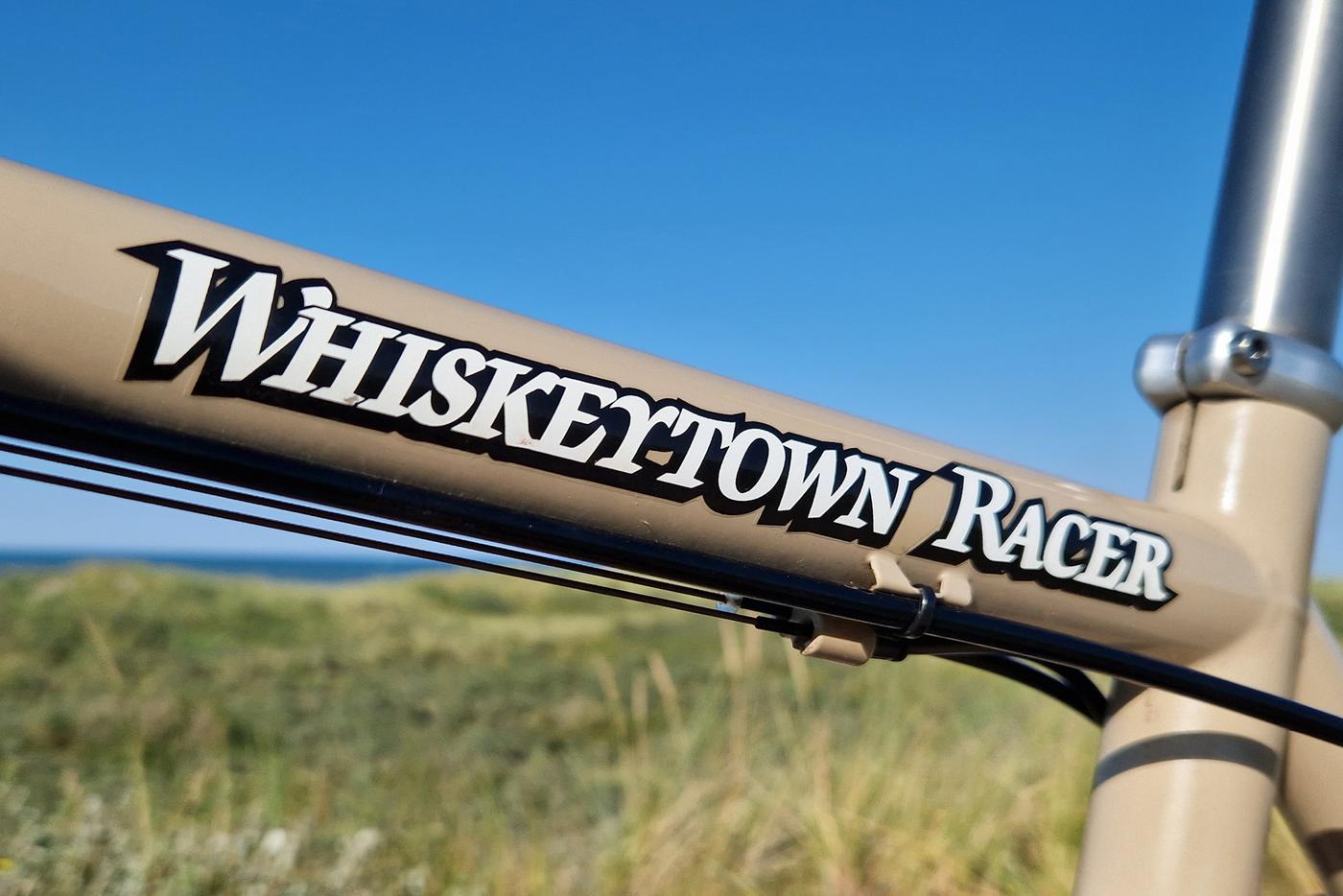 Hey, I’m Kees. Grew up on an island in the Netherlands living close to beach and dunes. On my first bicycle I turned the handlebar forward creating a bull bar which made climbing the dunes more fun. (And, not unimportant, it looked cooler than my friend’s bikes).

Kids bikes lead to mx bikes and subsequently (often booze infested) crashes. In the late eighties I met a German kid on the island who was riding a posh Canondale mtb. Since then I’m hooked and spending the better part of my paycheck on bikes. Road, mountain, track, cx, tx, fat, all road, gravel, you name it. Not to mention the shitload of parts. 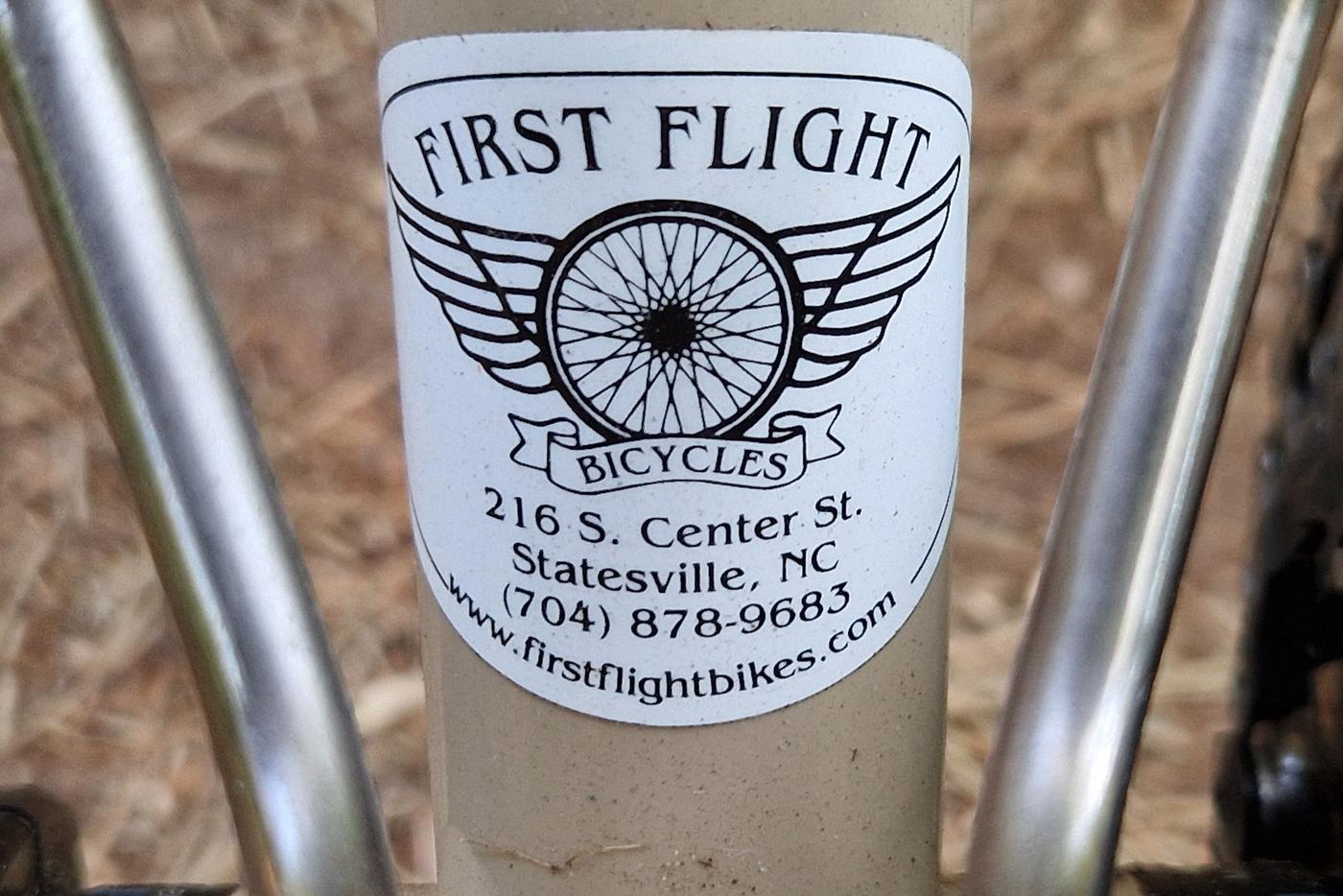 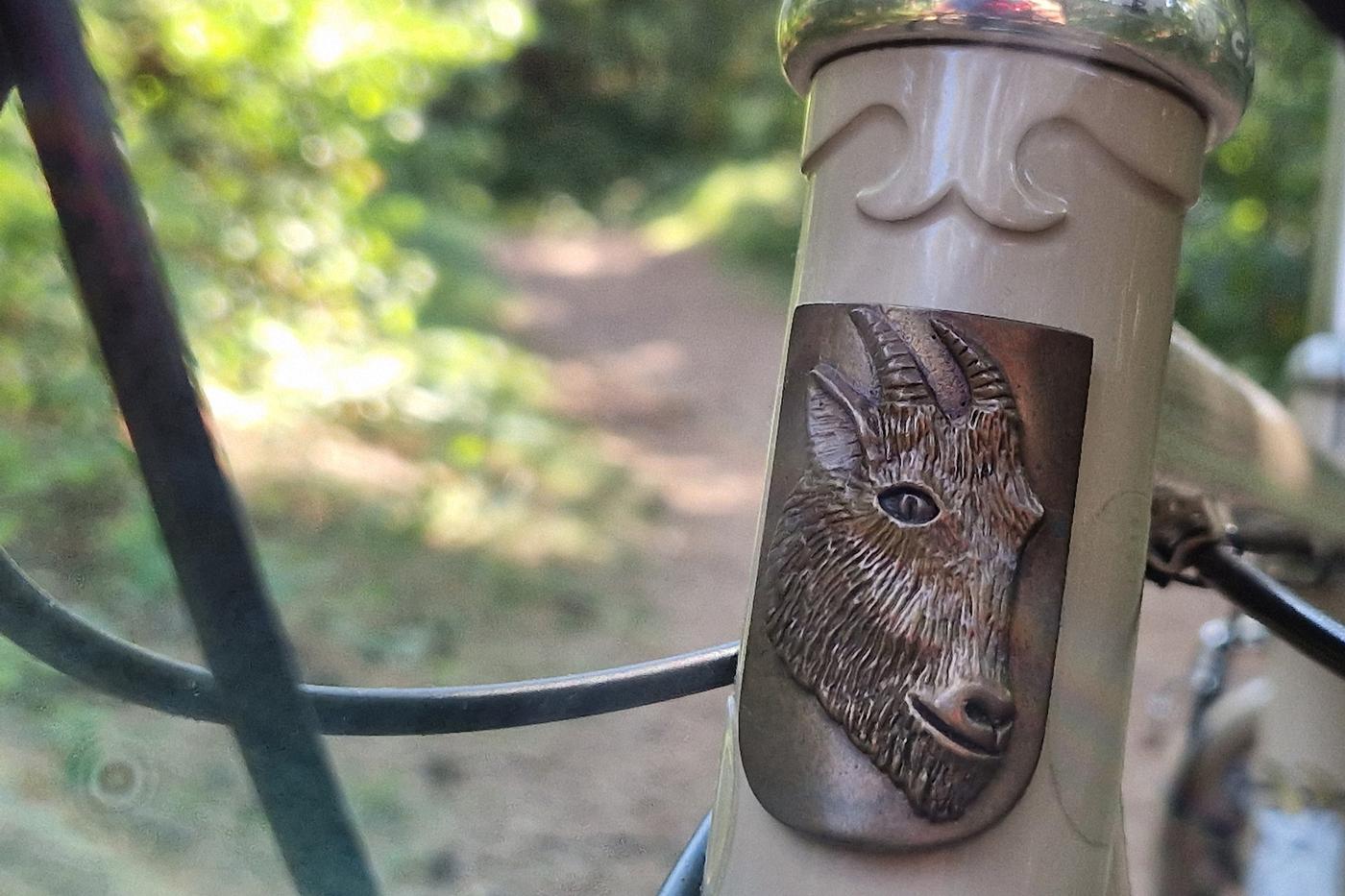 I sometimes ask myself, what would have happened if I wouldn’t have met that’d kid on his C’dale. Definitely my current financial situation would have been better. But this accompanied with that empty stare of a life without bikes.

Somewhere in 2008 I was looking at Jeff Archers First Flight Bicylces and MOMBAT site drooling over parts I once used to have (and sold way too cheap). Under approval of Jeff Lindsay he was reintroducing a line of custom build Mountain Goat frames. Different models, different wheelsizes, etc. These frames were build by a few US frame builders Jeff had selected. Because I’m not to be trusted with a credit card in a bike shop this sounded like a plan. Contacted Jeff and chose a rigid 26″ WTR with a nineties geometry and rim brakes. This frame would be build by Jeremy Sycip.
The combination of Jeff’s kind and experienced advice, Jeremy’s craftsmanship and me being the picky dumbass customer that thinks he knows it all has lead to this bike. It has never changed owner since and I ride regularly. It’s with pride and gratitude that this bike carries the First Flight Bicylces decal. I still thank the late Jeff and Wesley Davidson every time I take this bike for a ride. 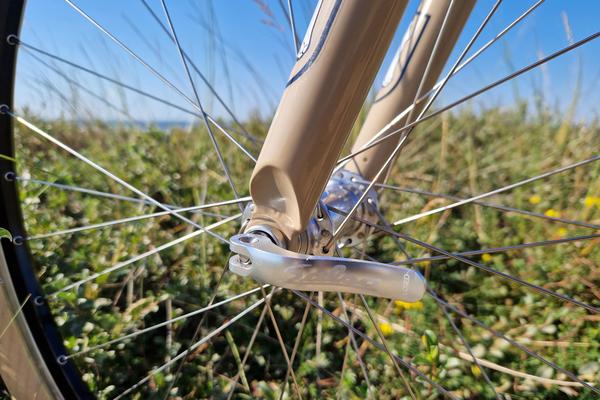 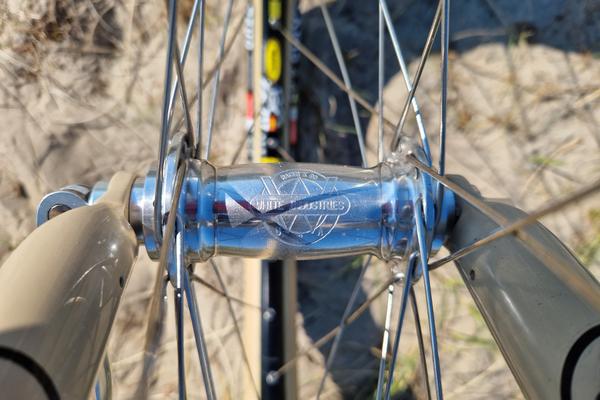 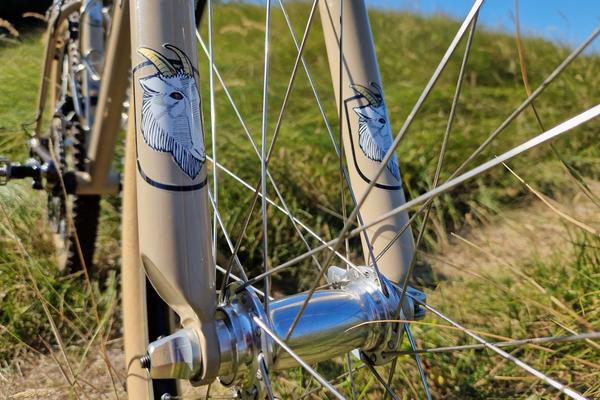 People sometimes say; “that doesn’t look like a ‘fast’ bike”. For the record, unlike a motorized vehicle a human powered bicycle in itself is not fast, it has only been designed to make it easier or more comfortable for the rider to travel at a higher speed with the same effort. Indeed, my current mountainbikes often take less effort riding the trails as this one. But by no means does it mean the Goat is less fun. Sorry, but I often chuckle seeing riders struggle with modern gravel bikes with skinnier tires, a same steep geo, hands on the hoods (read bar ends) and narrower bars on mtb trails. And then hear from them that this bike isn’t a capable mtb anymore. Compared to my other bikes with larger wheelsizes I’m pleasantly surprised how fast 26″ wheels accelerate and how nimble and fun the steering is when I ride tight singletrack. Riding track bikes a lot this bike makes for an easy conversion for me. I deliberately chose to shorten the handlebar. Modern wide bars when used on bikes with a geo like this lead to oversteer. And it gives me that nice 90’s feeling. Thanks to Jeremy building a high quality frame. After 14 years of riding the bike it can still be hammered. 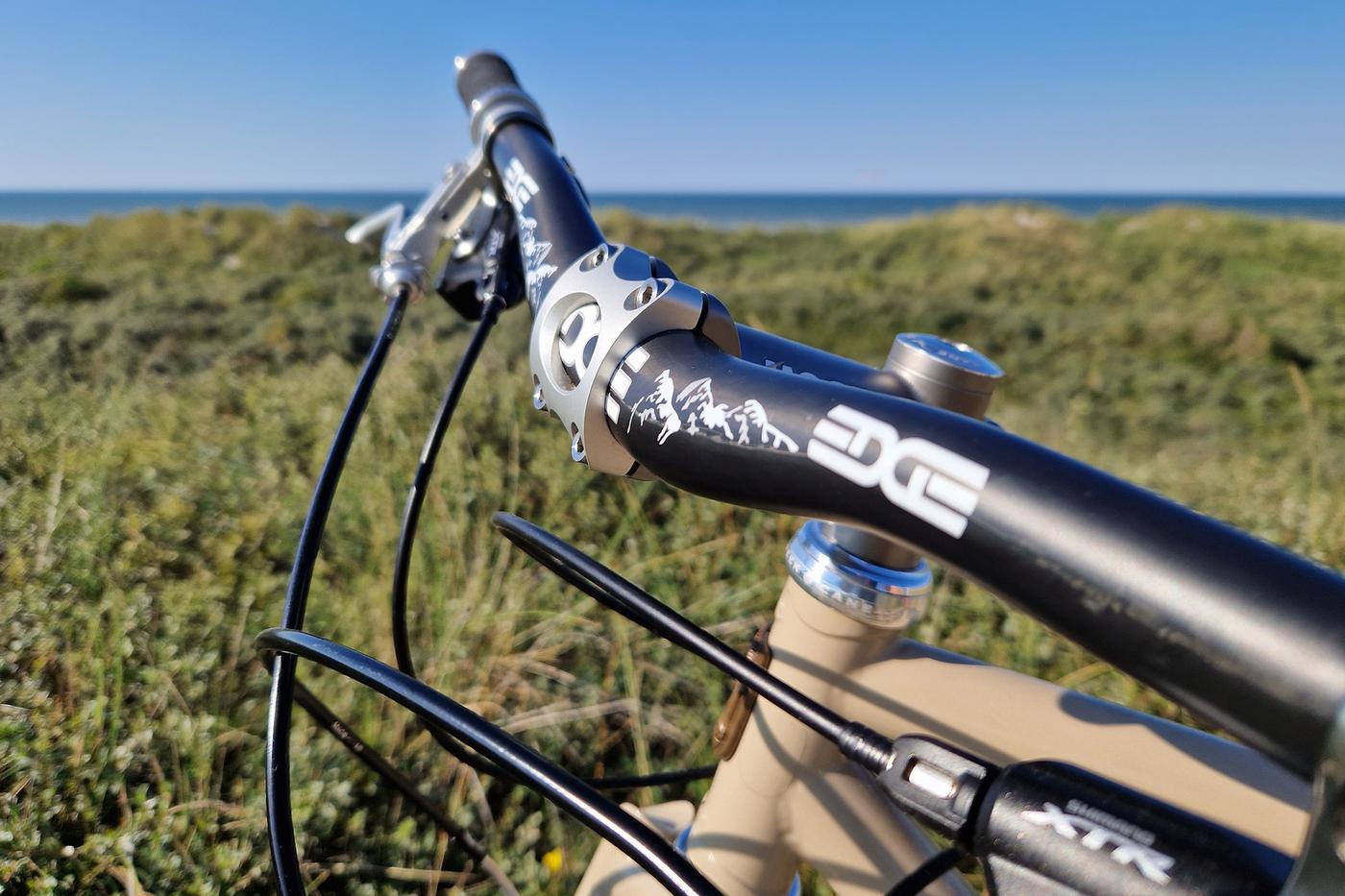 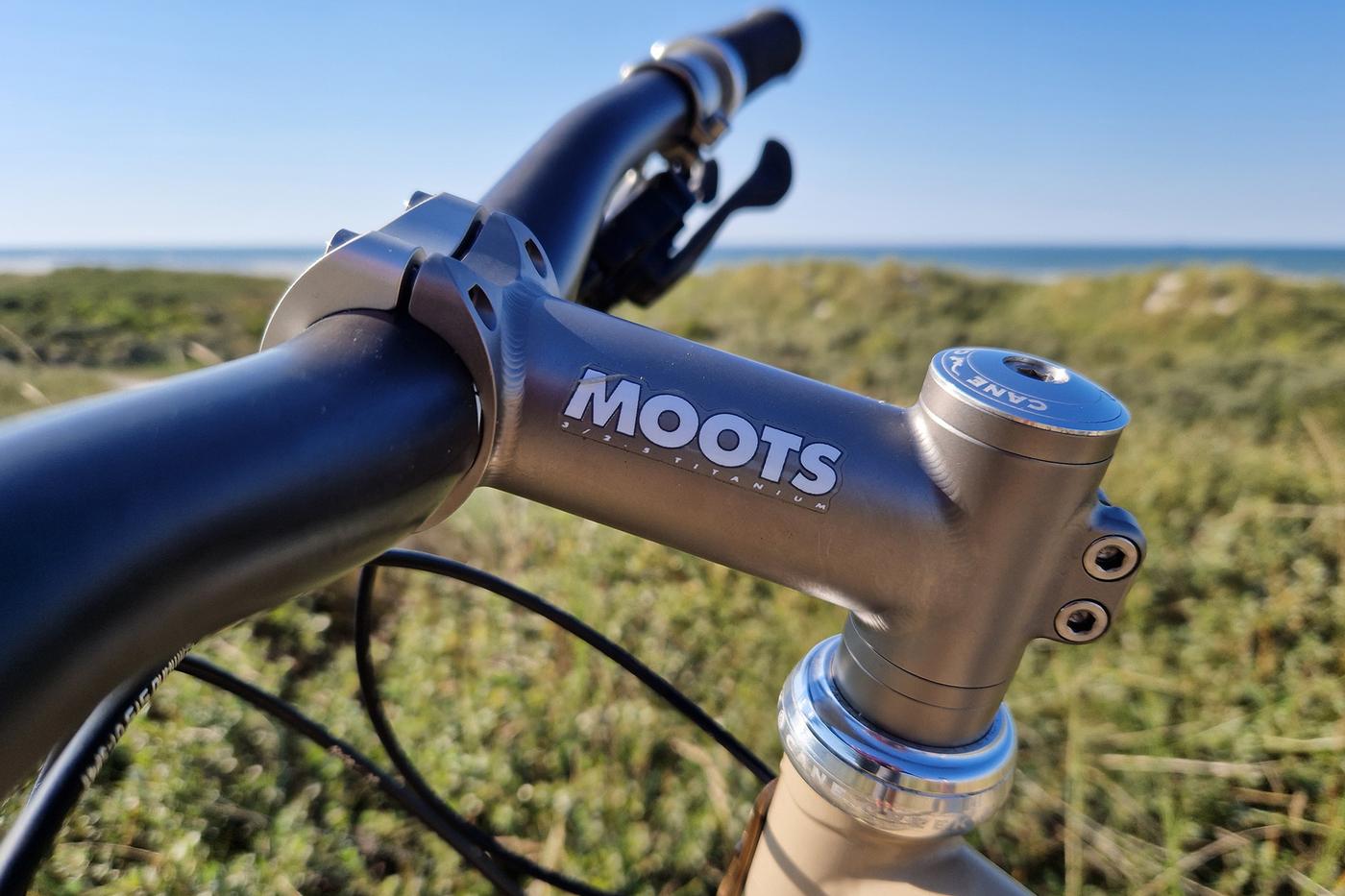 This bike mostly resides on the island Ameland where I ride the same dune and wood singletracks as I did when I was a kid. On rough trails it can be a handfull but it still brings a smile to my face riding it. That’s why I stripped the bike recently and had it repainted in the original colour with the extra decalset Jeff once supplied with the frame. Riding salty seashore environment makes for more than a stylish patina and I want to keep this one till I’m old. Parts are a mix of function, looks, not giving a shit about period correctness and sentimental reasons. Gearing is somewhat low for a country called The Netherlands. But I like a 2x set up and a front derailleur on a bike like this.