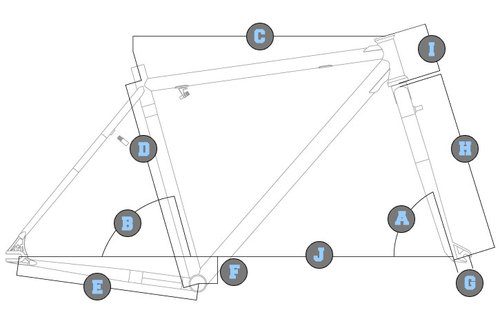 Funny how discussions and the internet overlap. I was just talking to Jeff from All-City about the Dropout‘s geometry. As I was finishing up my email to him, I hopped onto my RSS and caught today’s post on Tears for Gears; vintage catalogs? SURE! 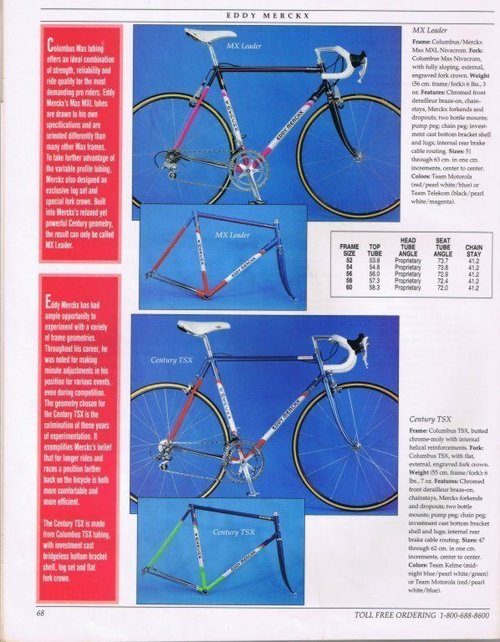 Catalog scan by Tears for Gears

As I’m reading his post, I scrolled down to the Eddy Merckx catalog. I read through most of it and then I came to the specifications table. Eddy Merckx considered their head tube angles proprietary and kept them a “secret”. It’s kind of silly to think about, but recent events have proven that bicycle geometry, especially with regards to the fixed gear freestyle bikes, can be somewhat proprietary. The All-City Dropout has a 73.5° HTA, the Milwaukee Bruiser has a 74.5°, the Leader 729TRK is a 74° the Charge Scissor‘s geo is still a mystery, with their site stating “71.5°?”. For the most part, the chainstays, top tubes and other dimensions are roughly the same. Are the head tube angles of these bikes proprietary? Are they the signature encoding that makes the bike unique? The seat-tube-angles are generally around the same and can be adjusted based on saddle-rail clamp, so I don’t see them as being as important to fixed gear freestyle bicycle geometry.

It’s an interesting concept. Geometry is what makes a bike and for various riders, the HTA is one of the deciding factors. Sure, street bmx bikes are steep as hell and bmx cruisers are more slack, where do 700c bikes fall on this sliding scale? Their predecessors’ angles were all over the place. What exactly is a “true track geometry” anyway? Some track bikes have a 72° HTA and others have a 77°. Bikes were designed around the events. A match sprint bike would have a steeper STA and HTA and the bikes used in longer track events had more relaxed angles. That’s just in reference to track bikes. Road geometry is also another one of those quagmires.

It’s something that all the “top” riders are usually discussing. Now that fixed gear freestyle riders have input on frame design (See the Volume Thrasher as a reference), we’re all getting the chance to study the great bicycle-design books and manuals of the ages. When we were working on the Bruiser. I tried to research frame design as much as possible and I’m sure Nick from Charge picked Super Ted and Tom’s brains on their preference. GOrilla had Wonka thrash their Kilroy prototypes around and give them feedback. Leader bikes polls riders on Trick Track and just about any company making a frame has people riding prototypes with different geometries. I’m not advocating one company or another, just making an observation. All this stuff is so nerdy to me and I’m glad to have had a part in this whole movement. I can’t wait to see more bikes come out and see where these manufacturers take their geometry.