Up Nort’ With Angry Catfish
Words and Photos by Kyle Kelley

Every year QBP invites people from all over the world to visit Minnesota during the coldest part of winter for Frostbike. Why they chose this time of year I don’t know but I’ve gone twice and wouldn’t trade it for any other bicycle industry event or convention. The people at QBP, and everyone else I’ve met in Minneapolis for that matter, are exactly the kind of people you wanna be hanging out with when it’s below freezing. They want to keep you warm and comfortable and a bit liquored up and I am A-OK with that.

When I found out I was heading to Frostbike again this year, I put the feelers out to see if anyone wanted to do any partying after the event and Josh from Angry Catfish was the first to respond. All he told me was to bring warm stuff and he’d take care of the rest. So, the Monday after Frostbike Josh picked me up and we headed Up Nort’ to the Angry Cabin with Thomas and Parker, also from Angry Catfish. I made a quick assessment of the supplies packed in the truck and all I could see was loads of beer, tons of cured meat, a comically large flask full of Booker’s and four fat bikes!

After a few hours of driving everyone was starting to get a bit antsy so Josh stopped at the Moccasin Bar in Hayward. This place was amazing. Taxidermy everywhere and one of the best bartenders in the business (there’s a good story here, make sure and ask me sometime). Pitchers of beer were passed around, a few corduroy hats were purchased and we were off again. Next stop Seeley, Wisconsin! 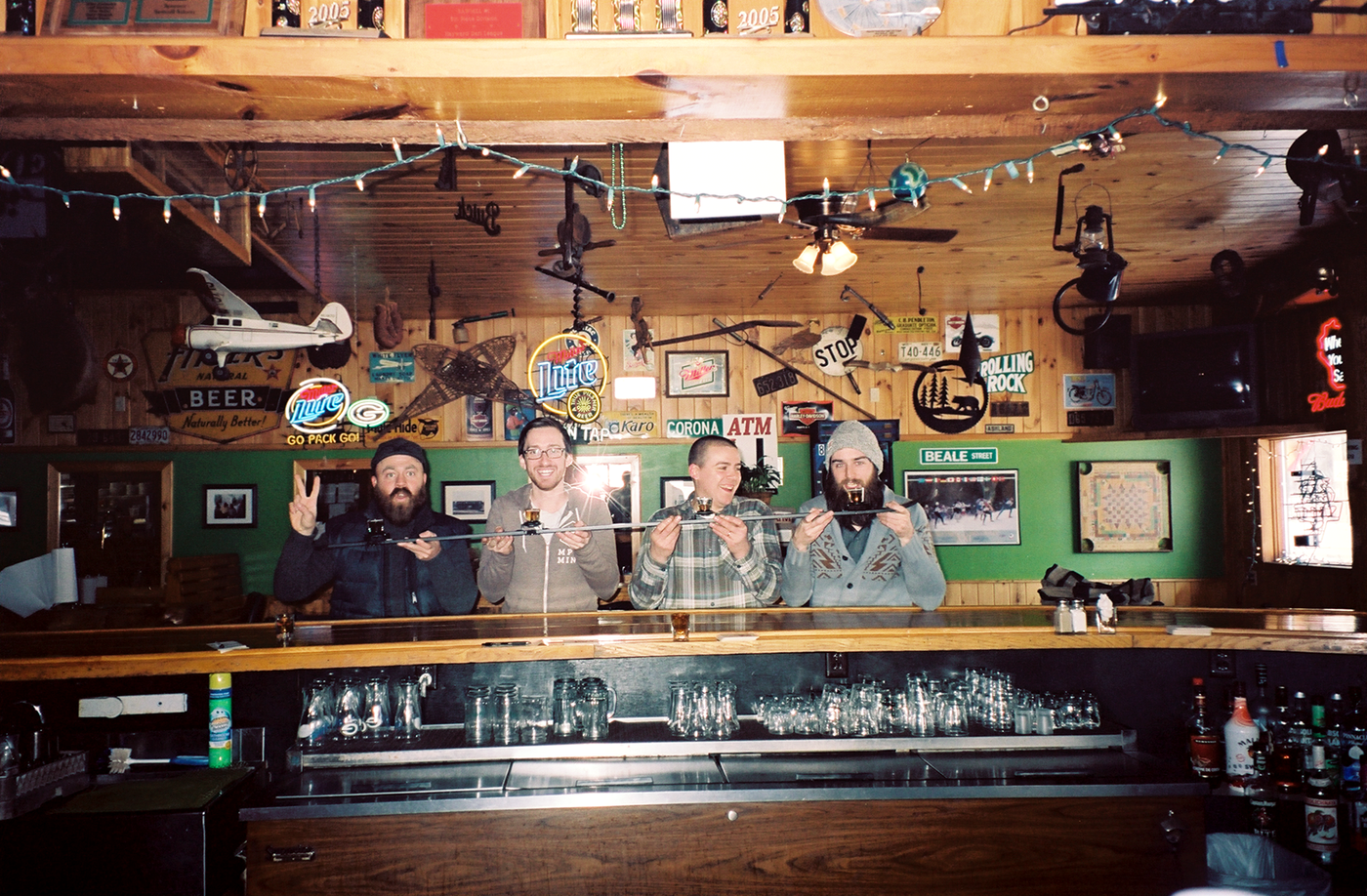 We pulled into the lot where we’d be parking the truck to do my first snowy single track fat bike ride, but there was a catch. You see, the lot belonged to the Sawmill Saloon and in order to get permission to park you have to do a shot-ski – a cross country ski with four shot glasses attached to it! The temperature outside had fallen well below freezing and the whiskey in our bellies was warmly welcomed. After drinking ourselves silly we took off on a soberingly cold ride. About a quarter mile into it we lost Thomas, or Thomas lost us, and he headed back to the bar to get cheese curds and chicken wings lined up for our return. We hunkered down at the Angry Cabin that night and fell asleep hoping the weatherman wasn’t lying about the temperature rising through the night. The next morning it felt like summer! The temperature had risen to right around freezing and was going to be perfect for our ride later in the day. Josh rode around the cabin in his boxers, we built a shooting range outside in our long underwear and had a breakfast of pancakes and sausage. We prepared some sandwiches and gathered our stuff to head out to a popular Wisconsin mountain bike trail called Seeley Pass. I’ve never ridden the trail, with or without snow, so I didn’t really know what to expect. To describe Seeley Pass in a few words I’d say – up, down and all around. It was 18 miles of snowy single track with more climbing than I would have guessed. The ride was a constant roller coaster! My bike didn’t have water bottle cages so I just carried Coors Banquets and Radlers for hydration. The last 2.5 miles were fresh pow so the riding was a bit harder than the more groomed stuff at the beginning. With all the eating, partying, post holing and riding we were out for about 4 hours and lucikly ended just as the temperature began to drop again.

We stopped for Peanut M&Ms after the ride and then headed back to the cabin to wait for Jeff from All-City to arrive. He got in around seven and the rest of the night was history. Warm tea and Manowar in the middle of the woods makes for a great time.

Thanks to the guys at Angry Catfish for showing me a good time and to Jeff, for really knowing how to turn up a party.