I’ve long admired the work of Rick Hunter, yet have never been able to get ahold of one in my size. Especially since he has closed his order queue. My thoughts were, one day a frame would pop up in my size and I’d have to swoop on it. That’s what happened, in a nutshell, when I drove up to Chico, California to hang out with Paul Component Engineering for a few days. The trip coincided with the recent Paul Camp, a media gathering at the Paul shop, featuring eleven bikes, built by select framebuilders, all around a joint theme: a monster cross or mountain bike. Oh, and the bikes had to use the same color scheme: red, white and blue. As a group, these bikes were marvelous and I had a blast both riding and photographing them, especially this very frame… After my visit to Paul, I contacted Rick to see if he’d want to sell the frameset, to which he obliged. See, the builders pay out of pocket to send these frames up to Chico, so I thought it’d be a good way for Rick to recover his cost and get this bike out there, ramblin’ around. Problem is, I’m not a “red” guy and the bike was very similar to my Independent Fabrication 29’r. So to justify buying it, I wanted to add some braze-ons to the fork and yeah, get it powder coated a new color. All of this coincided with my plans to go to South Africa to attend the Karoobaix, a gnarly dirt road race through the Karoo Desert. Latest reports have the event totally anywhere from 250 to 300km in a day. Then, after the race, I’m planning on doing some bikepacking with the event’s organizer and some of his friends. So the bike I bring to South Africa has to take on a grueling course and be able to do some light touring. Personally, I’m really into riding rigid mountain bikes on courses like this and prefer a flat bar to a drop bar for light touring or bikepacking. There’s just more bag real estate bang for your buck with a flat bar. They also tend to be a bit more forgiving for long days, in my opinion anyway. 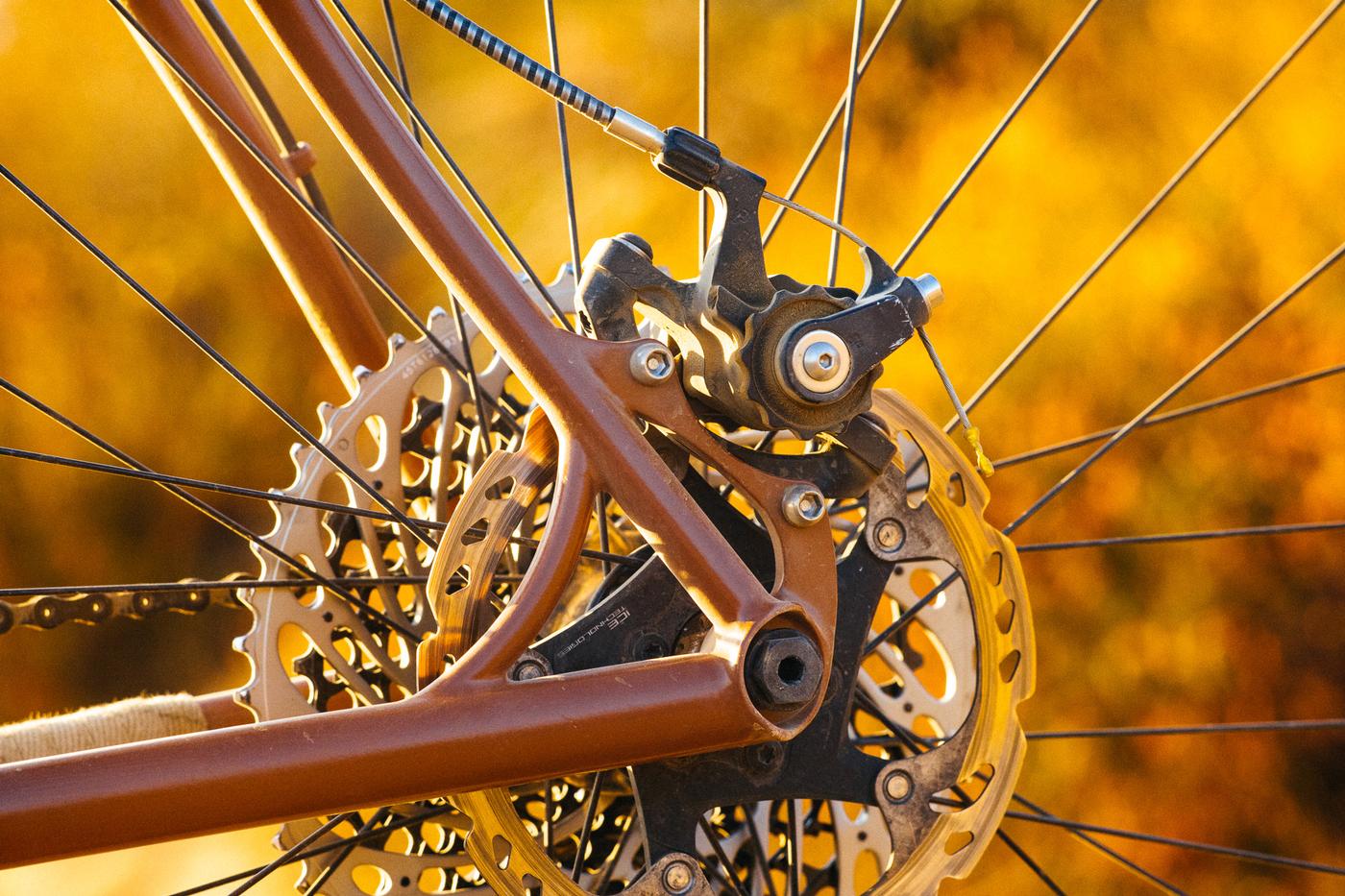 Rick and I chatted. He’d add rack mounts along with rear-facing cargo cage mounts to the fork, powder coat it “Mojave Brown” with tan decals and ship it down here to Los Angeles for me to build it up with some poached parts from my Indy Fab, along with a few new pieces I’ve been sitting on. Short pull Paul Klampers with short pull levers and compressionless housing have been my go-to brakes as of late, with White Industries 30mm spindle cranks, one of their new headsets and some gumwall Maxxis Ikon tires. To top it off, I’m 1000000% sold on SRAM’s Eagle technology for a bikepacking rig, having recently put Eagle GX through the ringer on my 44 Bikes tourer. On a 29’r, you can run a 28t up front with the 10-50t cassette in the rear and you won’t spin out too much going downhill or at all on the flats. I put the SRAM XO1 Eagle kit on the bike, coupled with White Industries cranks and a 28t front chainring.

In terms of geometry, I’m not sure what my Indy Fab is, but this Hunter has a 69º head tube angle, a 74º seat tube angle, with a 2.76″ BB drop. The fork has an elegant rake to it, giving the bike a modern feel, with a very old-school aesthetic. Like all of Rick’s frames, nothing is straight from a part’s catalog. He hand machines everything, from the yoke, to the dropouts and thru-axle inserts. I love wishbone seat stays and I’d like to think this one offers a bit of compliance while descending rough roads, but that could very well be a number of other things. After riding a lot of 27.5+ bikes over the past few years, it feels nice to be on a 29’r with a 2.2″ tire. 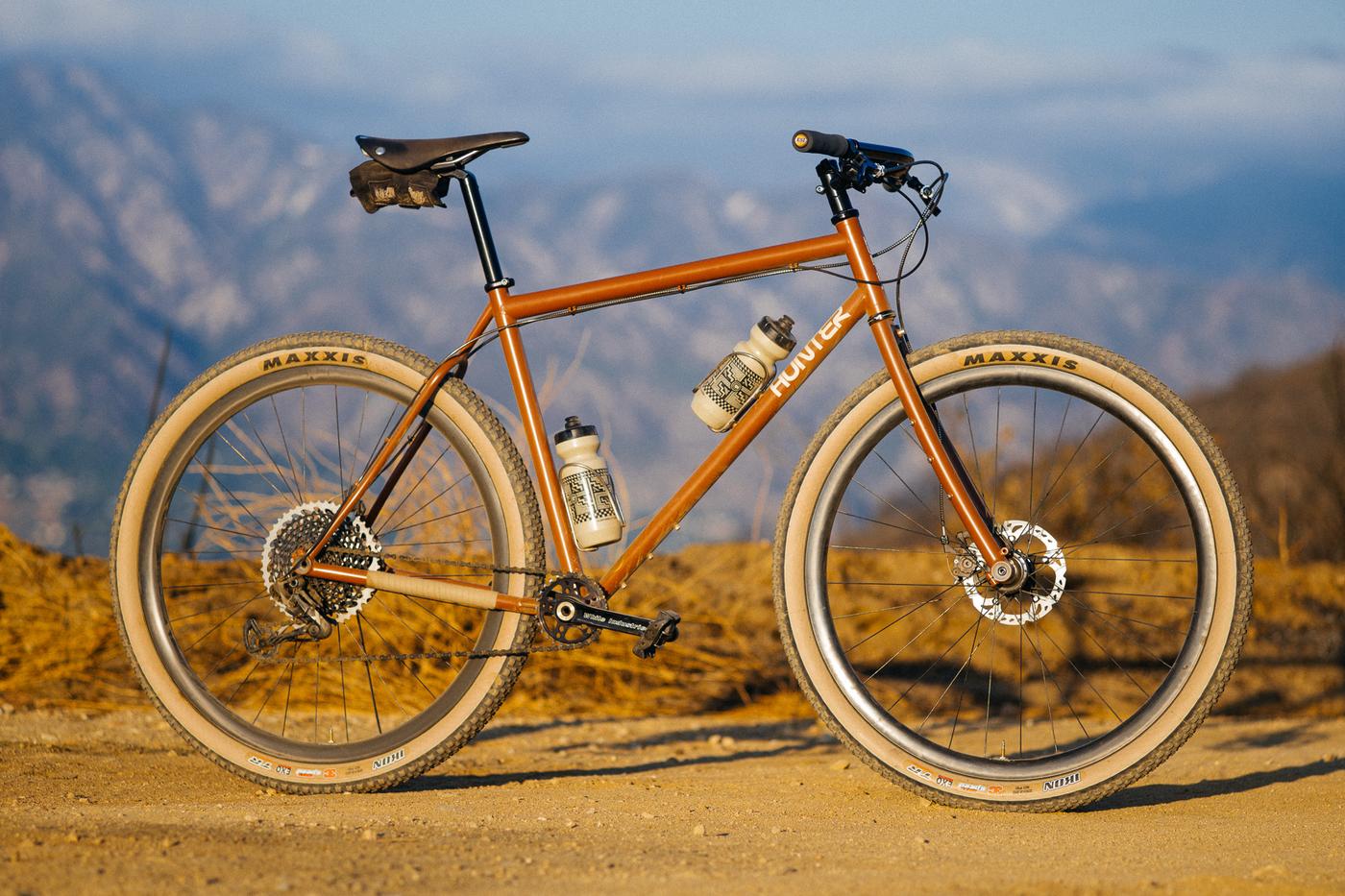 The completed build looks worlds apart from its original and that’s not a bad thing, it just shows how versatile non-suspension corrected, rigid 29’r frames can be. Rigid mountain bikes are unforgiving on the trail and can prove to be quite sketchy, even on the most familiar bits of singletrack, yet they’re a great way to make your local tracks more interesting. In a white-knuckle kinda way.

I can’t wait to pack this thing up and fly to South Africa next month!
____