HSTB. The Crema Duo changed Los Angeles’ riding for me. In fact, it changed how I feel about the potential for ‘cross bikes to be the most versatile bike in your stable. Take everything you love about your bike and turn it up to 11. Big tires, disc brakes, lightweight, snappy geometry and the ability to hold your own in a pace-line, while still being able to crush singletrack and fire roads all in a tight package.

The Duo is the brainchild of Ken Bloomer from Crema Cycles, with the construction experience of Mattia from Legor Cicli. Together they worked out the design and production of these frames, with enough confidence to offer them to the public. An experienced mountain bike racer and ‘cross aficionado, Ken wanted a bike that could take on a metric century on dirt and still be raced at the weekend’s ‘cross races, whether UCI-sanctioned or not.

Well, the Crema Duo is designed to fit a 27.5″ wheel with a 2.2″ XC tire and a 700c by 48mm ‘cross tire. Meaning, you could be shredding this bike on singletrack with your 27.5″ mountain wheels all week, if you’re so inclined, and then throw on your ultra light 700c x 33mm ‘cross tubulars on the weekend to tackle races. 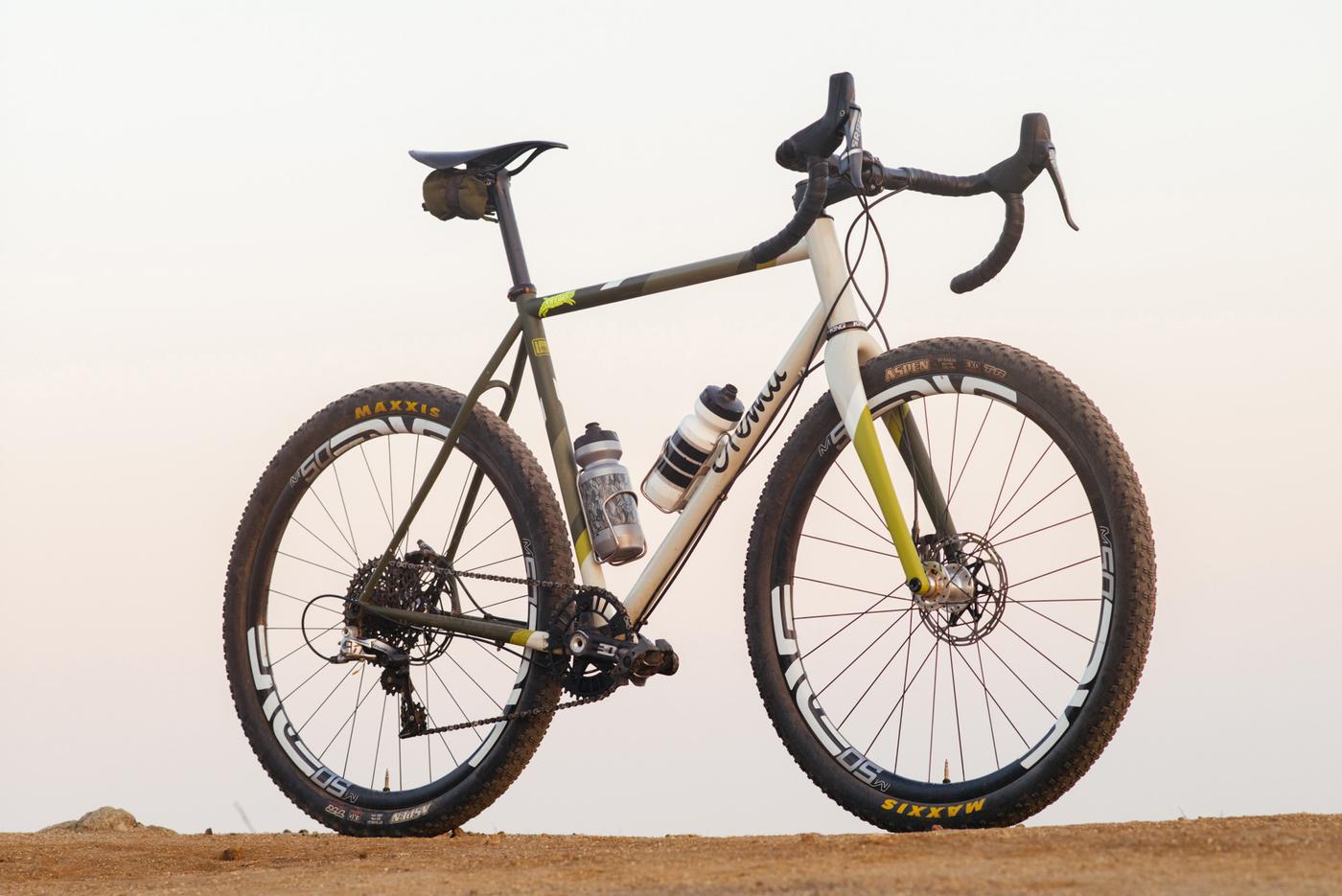 Or, if you’re like me, you just ride the damn thing with a 27.5″ wheel and rarely ever swap out its rubber for a more “race-friendly” option.

Yes, since owning this bike, I have only ridden it with a 700c wheel and tire combo once, during which, I said to myself, “self, this isn’t nearly as shreddy or fun, so why would I do this?” to which the race-demon replied, “dude, cross is coming! You’ve gotta race a 33mm tire for UCI!”

Ok, truthfully, I don’t race that often, so the second point of this argument is moot – but I wanted to address it for those who might be reading this and do in fact shred and race the same bike. 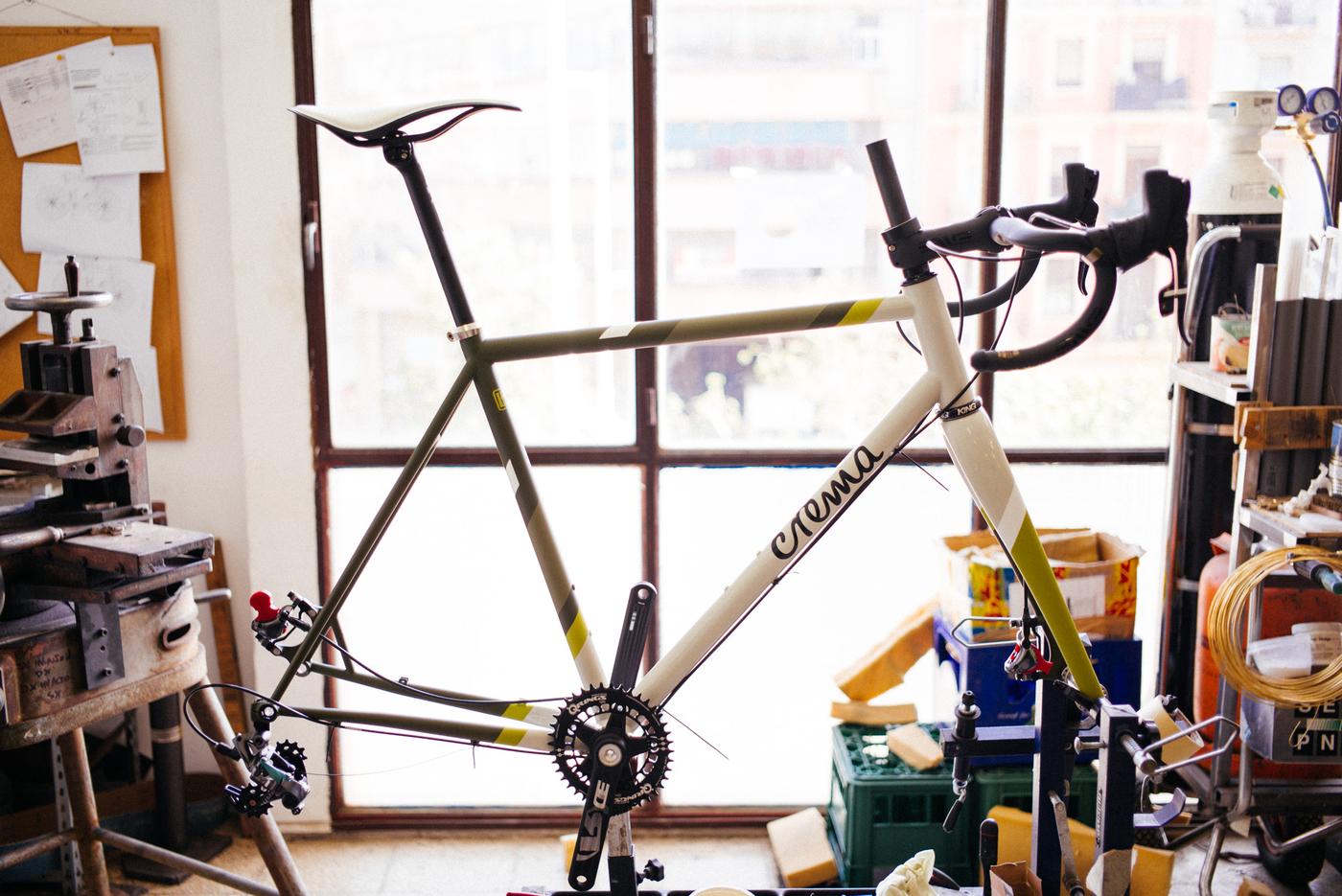 While Ken Bloomer may have designed the frame, Mattia from Legor Cicli constructed it using Columbus tubing, a T47 BB, ENVE disc ‘cross fork and Syntace thru-axle dropouts. The bike has curves, is sturdy, and is capable of taking mid-trail diggers and everything in between. I have literally thrashed this bike since it was handed off to me back in the early spring, on everything from road group rides to wicked pissah singletrack jaunts in both Barcelona and Los Angeles. Just look at the many paint chips and beausage marks! Back when Kyle had ordered a new disc brake bike from Stinner Frameworks, we had discussed tire clearance. My biggest push was for 50mm of clearance, which in Los Angeles is plenty since we don’t get a lot of rain and consequently mud here. Then, the Duo arrived and suddenly both of our opinions changed, prompting Kyle to holler at Aaron to make his bike fit the same wheel. Since then, we both agree this is the way to go in terms of a custom ‘cross bike. This Stinner was a result of my Duo. 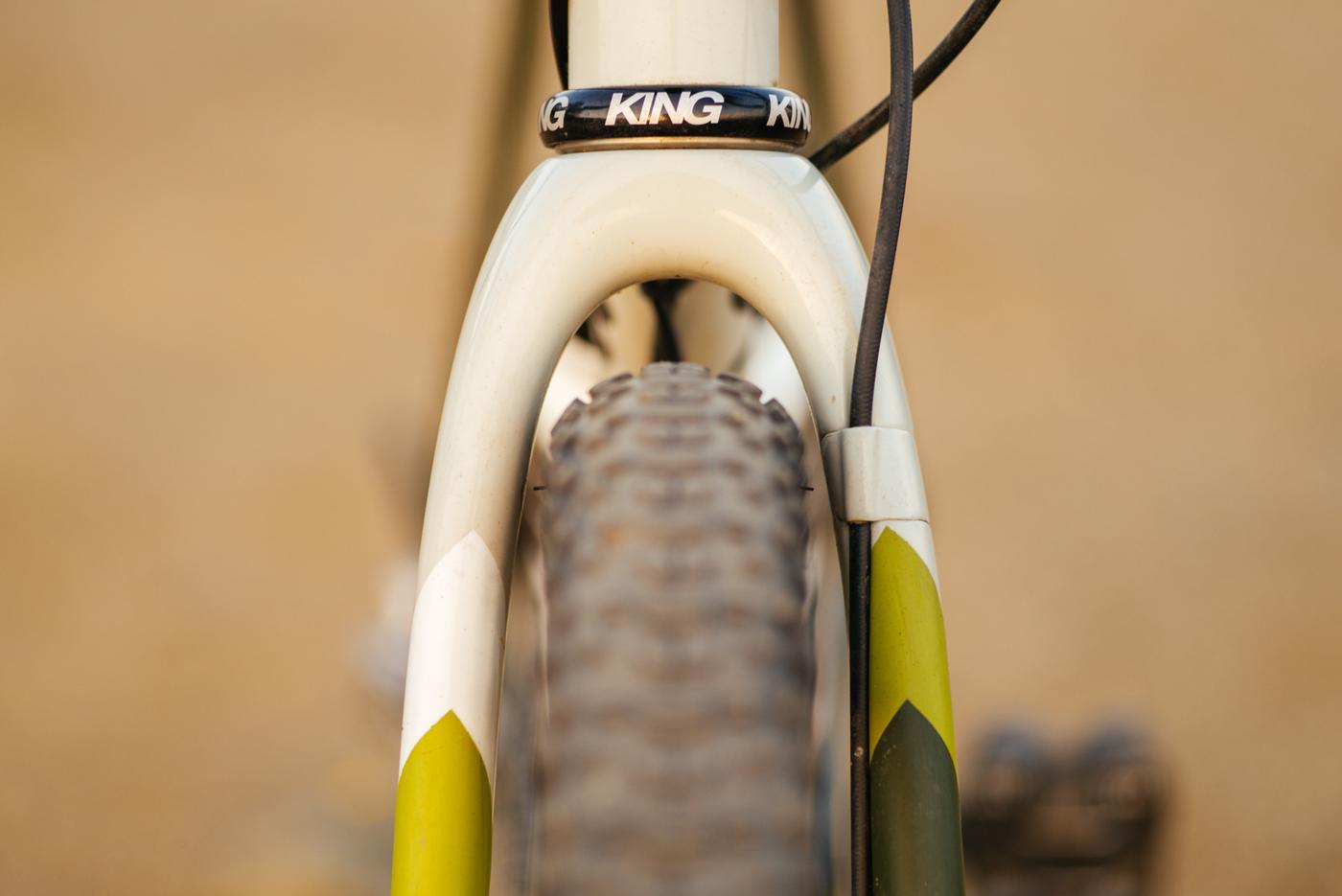 As you might have guessed, it’s not easy to cram a 27.5″ by 2.2″ tire in a chainstay otherwise designed to fit a 700 by whatever ‘cross tire. You’ve got chainring clearances to work out, crank compatibility, and chainstay length to consider. While I won’t disclose specific numbers or specs, I will say that the Duo fits up a 2.2″ XC tread MTB tire and a 42t 1x ring (I am running a 38t) on a Rotor 3D crank with enough clearance to inspire even the most out-of-true wheel.

Other than that, the next hurdle is having the fork clear the tire, which as you can see is not an issue. Since first having the bike delivered, I did however re-lace the rear wheel to a King Classic hub to take the SRAM XD driver and a long cage SRAM Rival derailleur. I also removed the oval Rotor ring for a prototype 38t AARN ‘cx ring. This gave me the gearing I needed for tackling the fire roads and trails in LA, while still being able to ride in a group ride environment. The gist of this build is centered around SRAM’s 1x offering. A mix of Force shifters and brakes with a Rival rear mech and a third-party crank keep this bike rolling smoothly, while the White Industries T47 bottom bracket provides a fat footprint for the oversized Columbus tubing. ENVE components are sprinkled throughout and the Maxxis Aspen tires have given me absolutely zero issues for hundreds of miles of dirt riding. Oh and that Fabric ALM saddle is amazing! I’ve yet to even ride it with a chamois! 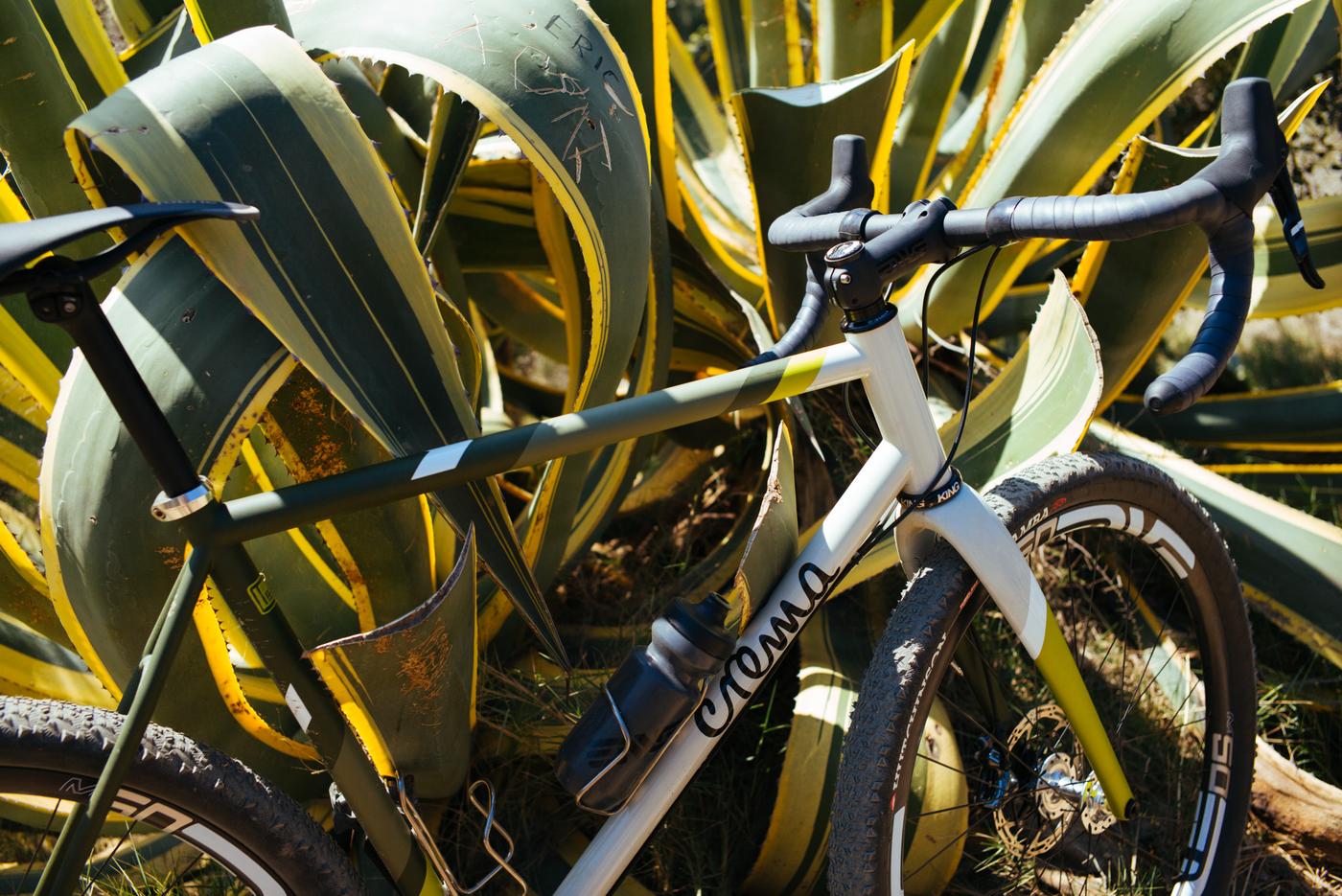 The Agave Marginata is an extremely drought-tolerant species of the more common blue agave that presents a beautiful white to yellow and green cast in its beautiful stalk and leaves. Was the Duo’s paint inspired by this succulent? I dunno. Does it look great? Of course. Thousands of years of evolution doesn’t produce turds in terms of desert flora!

Can I Have One? 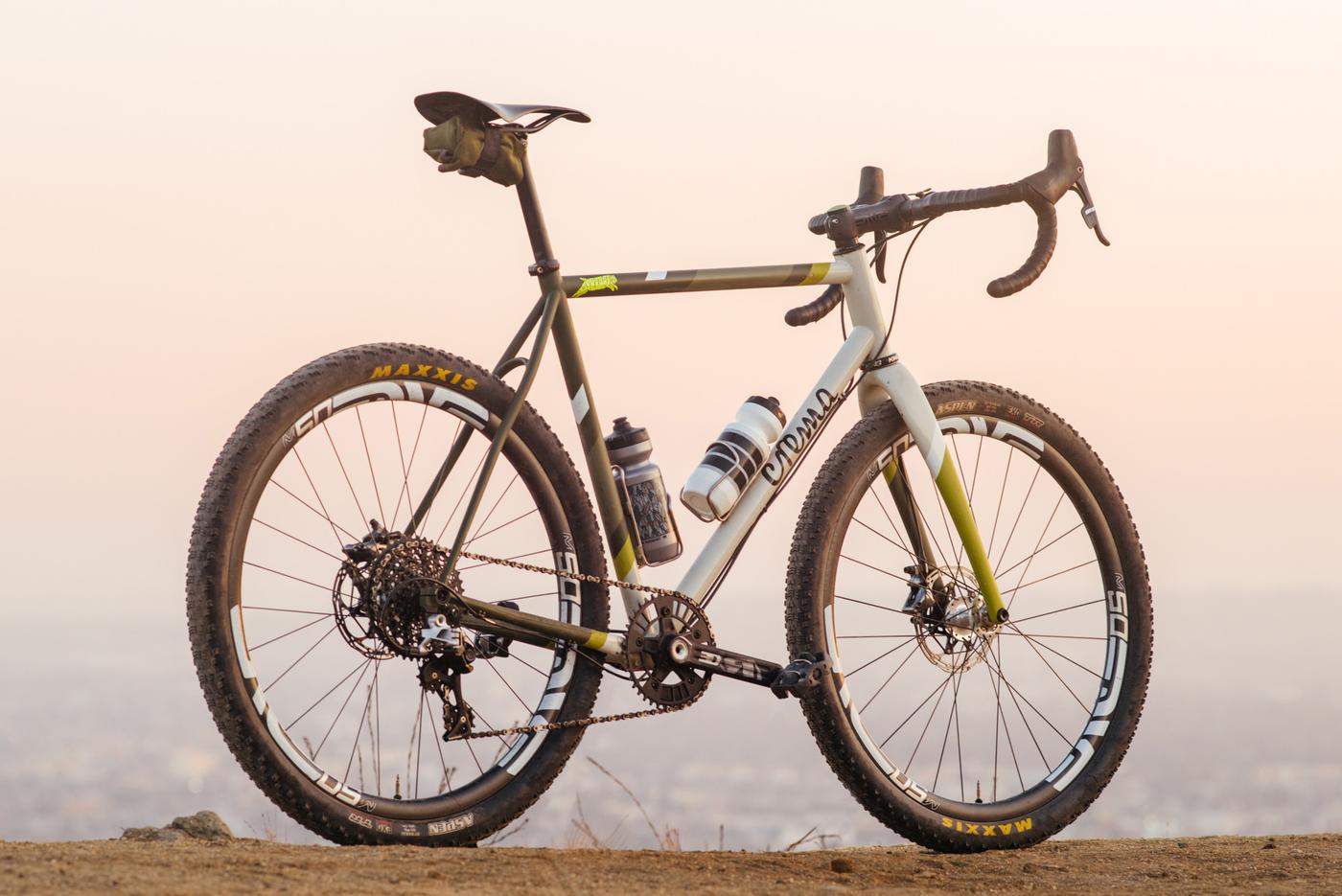 Look, the proof is in the pudding. I don’t like bike reviews anymore than you probably enjoy reading my attempts at analyzing geometry (wait, I didn’t even talk about that!), specs or other minutiae. As someone who throws his sunburned legs over many bikes in a year’s time, I can say however that when a bike like this shows up and suddenly you find yourself choosing to ride it, over its other stablemates, it means something.

This Crema Duo has literally blown my mind as to what a drop bar bike is capable of. It’s been a vehicle for fun, and a catalyst for bicycle design as a whole. Holler at Crema Cycles if you want to throw your leg over one!