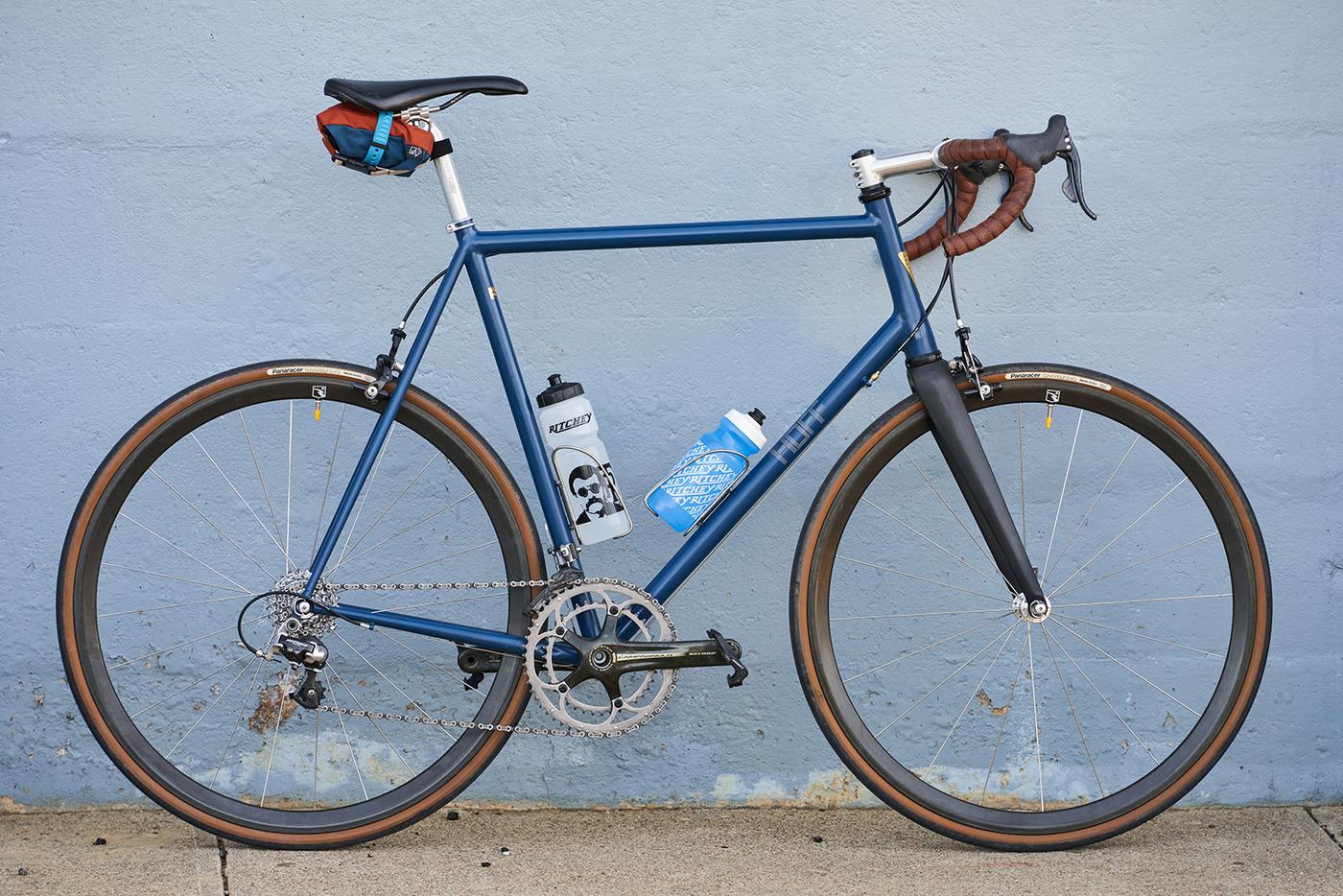 Anytime a reader sends in their self-built frame to our Readers’ Rides email box, we drop everything and check it out. So far we haven’t been disappointed! Adam sent in this gorgeous road bike that he built at the Metal Guru Framebuilding Workshop, along with a story and parts breakdown, so let’s get to it! 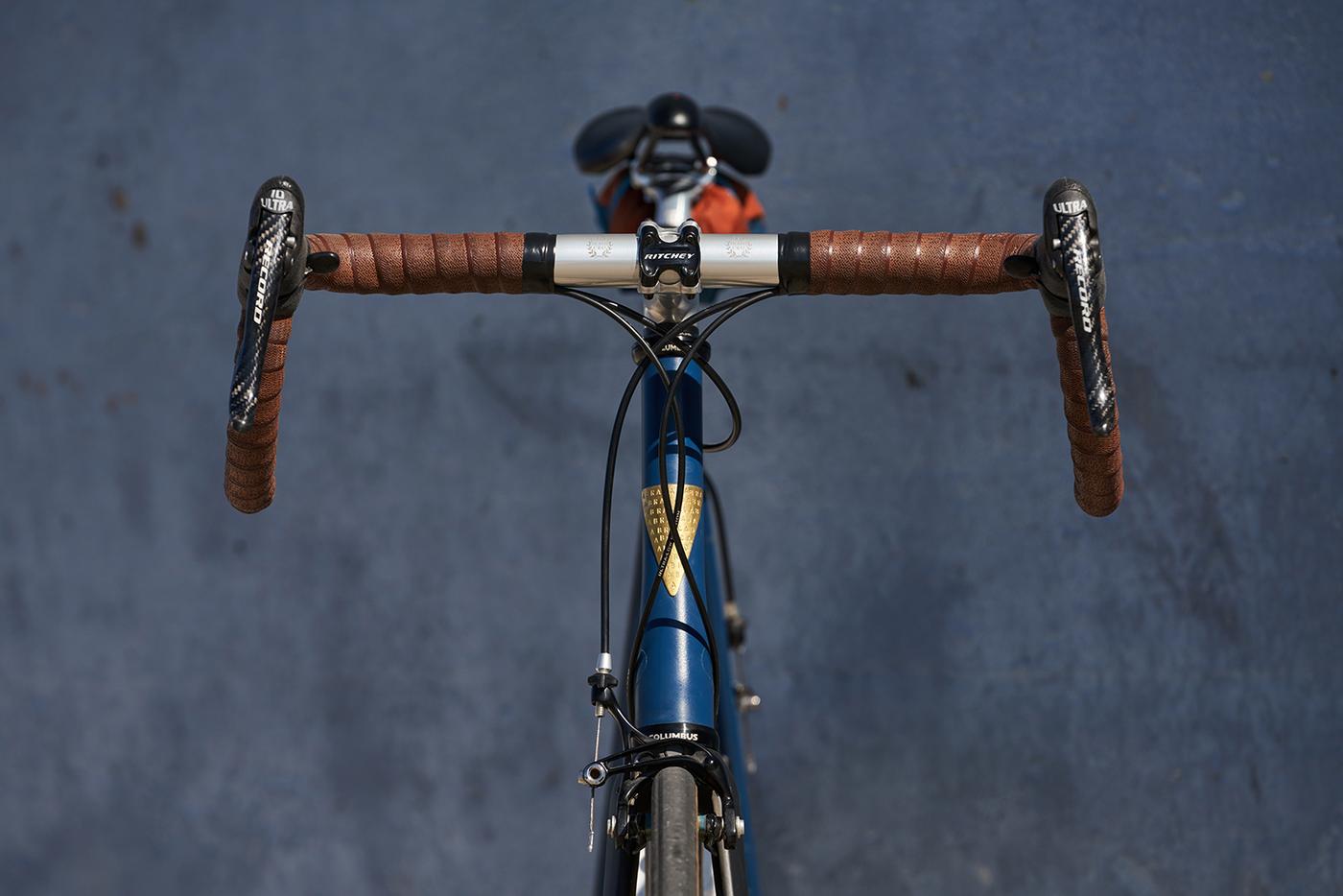 Hi! My name is Adam Hoff. I’m a photographer most of the time, but I also have a bit of a bike obsession and recently have begun to build my own frames. This is the first frame I built and I wanted to share it with you all. (I already sent this submission a few days ago but realized that I sent HUGE images with it, so just in case you wanted them here it is again with smaller files) 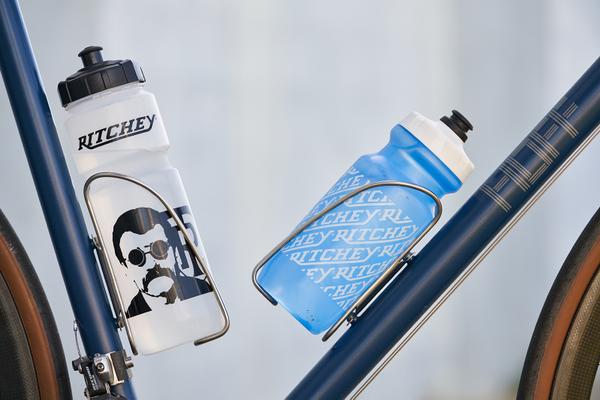 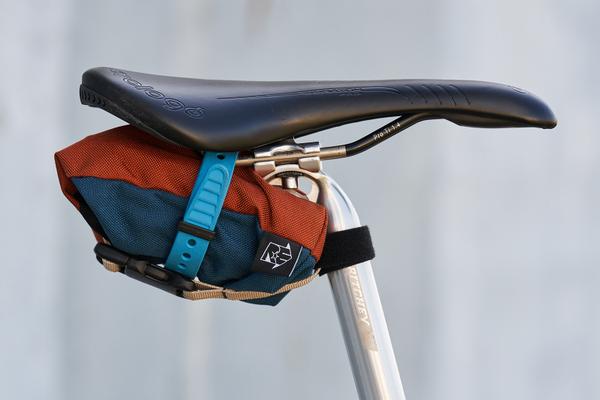 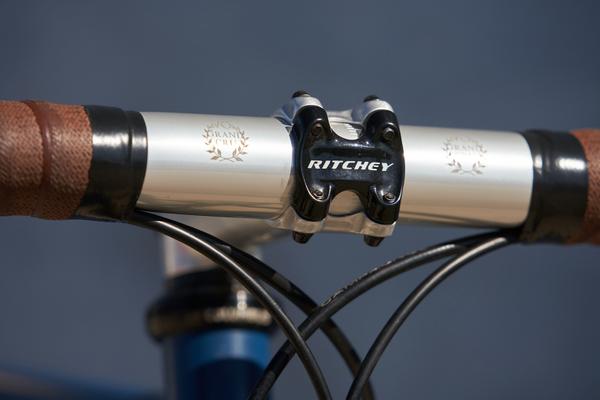 I built this frame last August while taking the Metal Guru framebuilding workshop with Steven Bilenky and Carl Schlemowitz at the Vicious Cycles world headquarters in New Paltz NY. I can’t say enough good things about these two men. They were wonderful, patient teachers and the amount of knowledge and experience I got in 8 days with them would have taken me probably 8 years of head scratching and watching way too many youtube videos to acquire on my own. 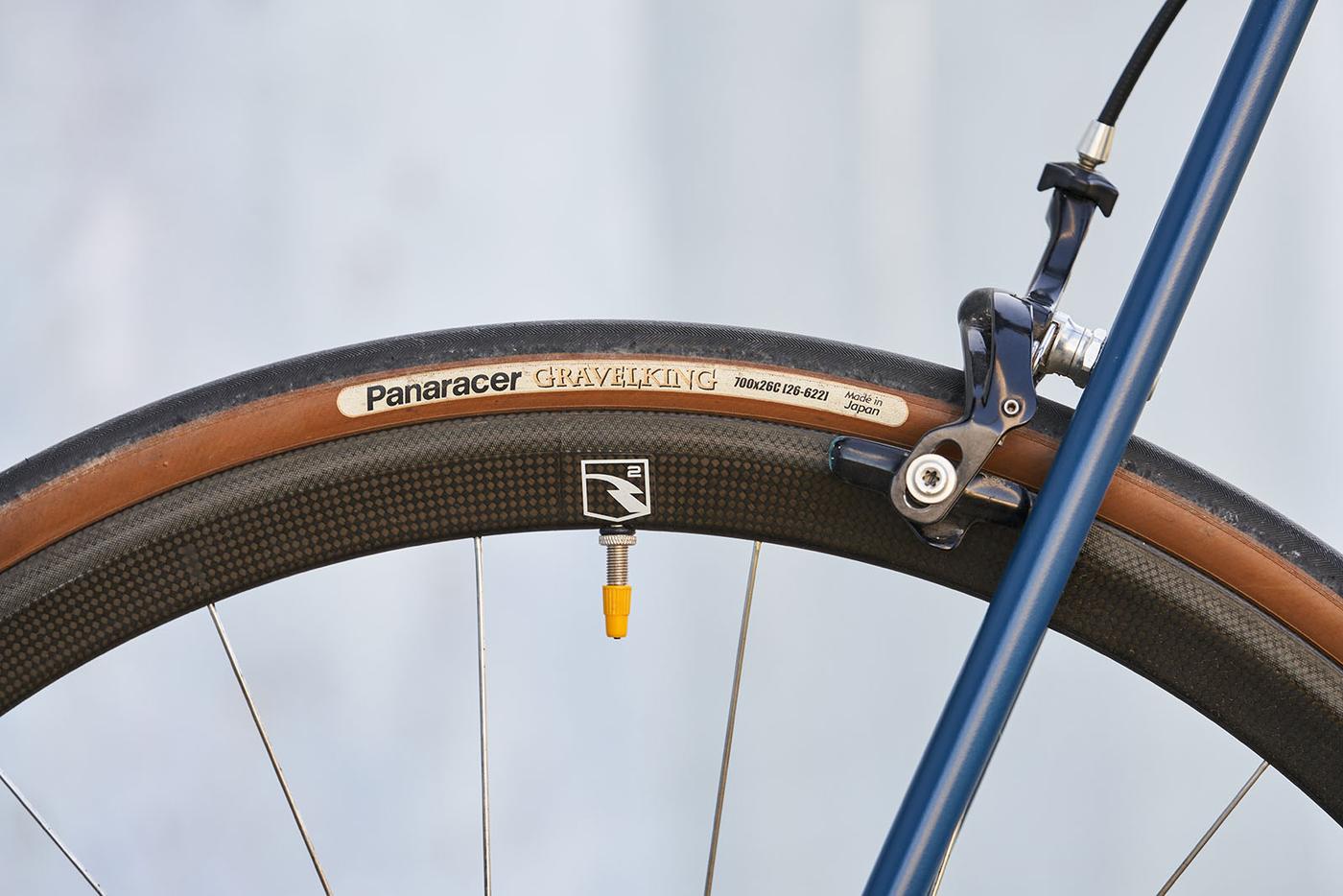 I hadn’t owned a pure road bike since I sold my last one when I moved from Brooklyn to Bethlehem PA in 2018. I wanted some more capable bikes to handle the varied terrain that I all of a sudden found right outside my doorstep, so I bought a Santa Cruz 5010 and a Crust Bombora and for the last few years have been loving all the new MTB trails and off pavement riding in eastern PA. Then last summer just before taking this workshop, I spent some time riding my dad’s Colnago C50 and found myself really missing having a quick, precise handling, dedicated road bike. 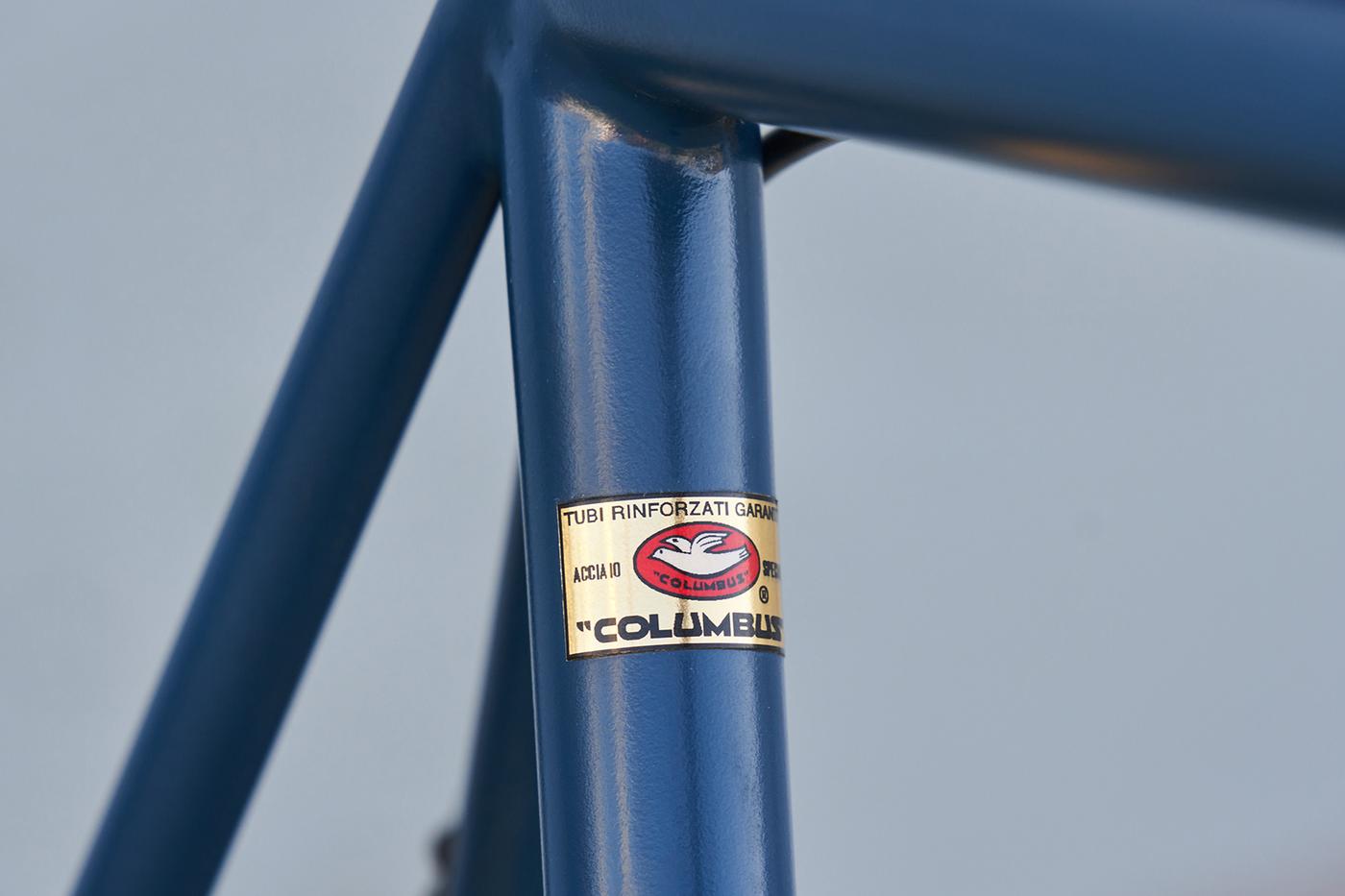 When I was trying to decide what kind of bike to build at the workshop, I kept coming back to the C50. I decided that I wanted to try to build myself a version of that bike, but fillet brazed steel of course. This frame is made out of a mix of Columbus tubing, mostly Zona but with a Spirit HSS head tube and MAX downtube, Ritchey dropouts out back and a Columbus fork. Carl was especially fond of the full round chainstays we picked out and as the frame started to take shape and his excitement showed, it really got me motivated to make it the best bike it could be. 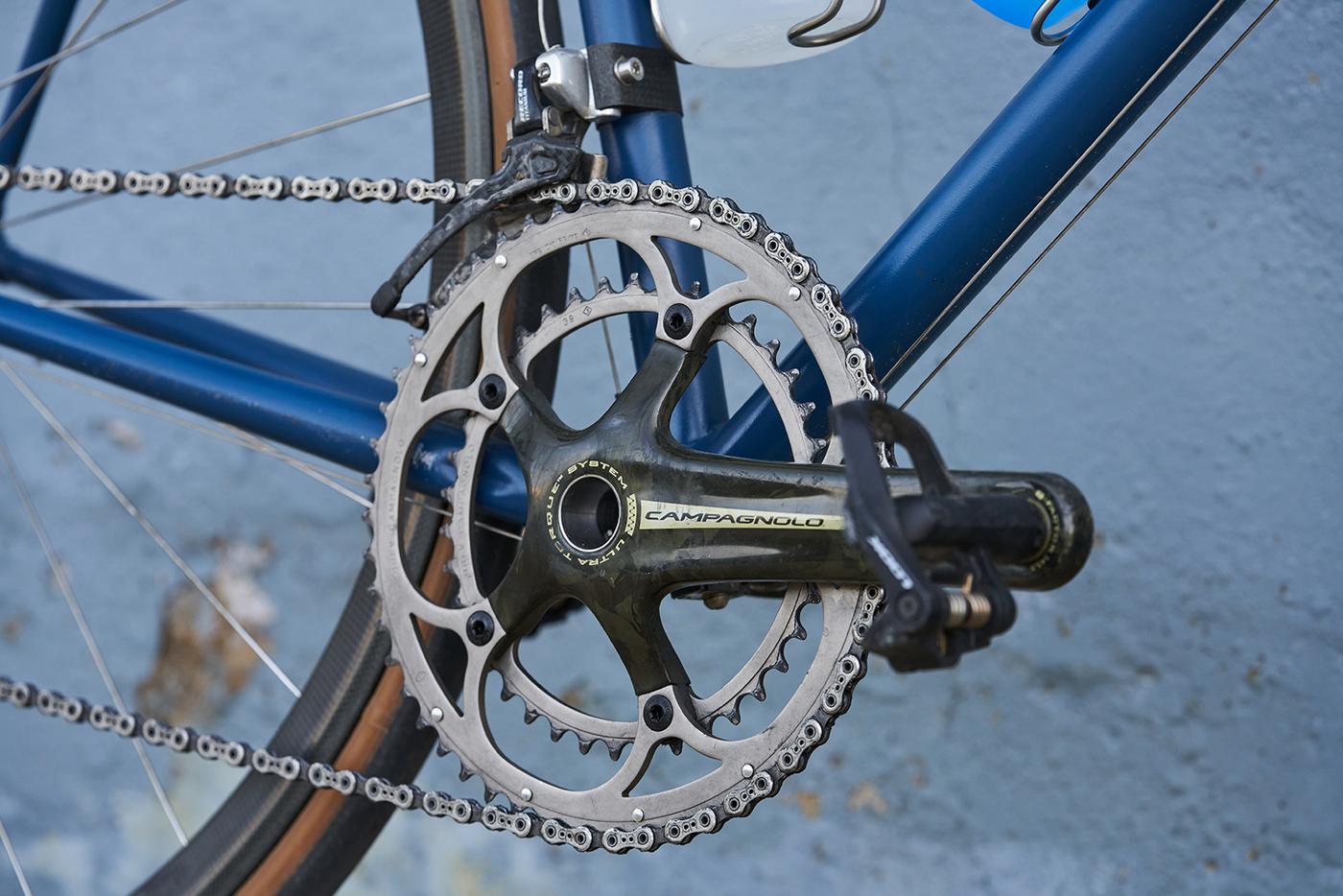 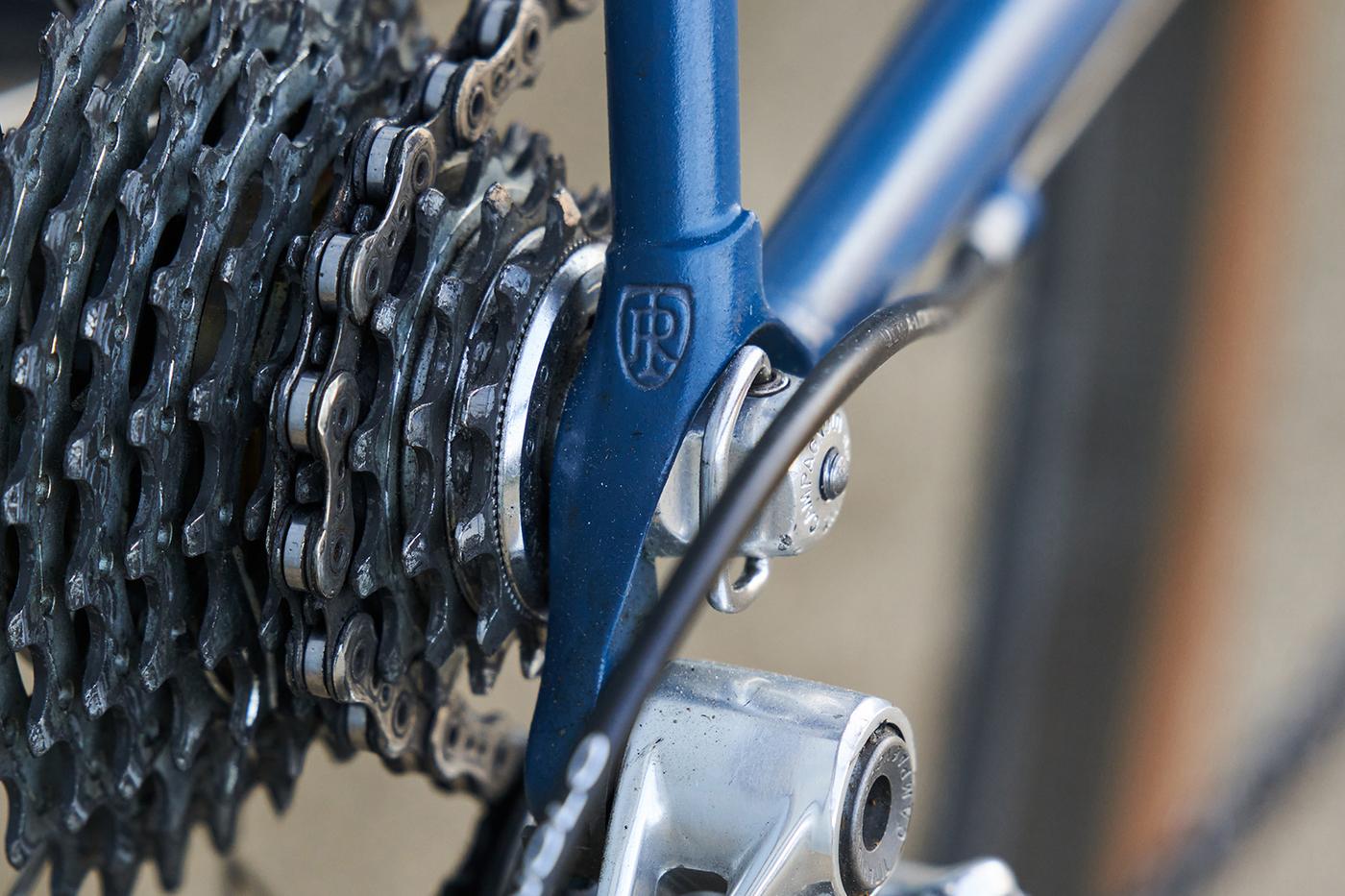 I got super lucky on our day off during the workshop as I was able to source most of the parts for the build locally from a very nice person who agreed to strip an old Serotta frame they had and sell me the full Campagnolo Record 10 speed groupset, Reynolds carbon wheels with almost new Panaracers mounted, Velo Orange bars, and Prologo Ti seat. The only thing I didn’t get off the Serotta was a stem and seatpost, but I happened to have a new Ritchey seat post and a Ritchey stem in my stash back home. 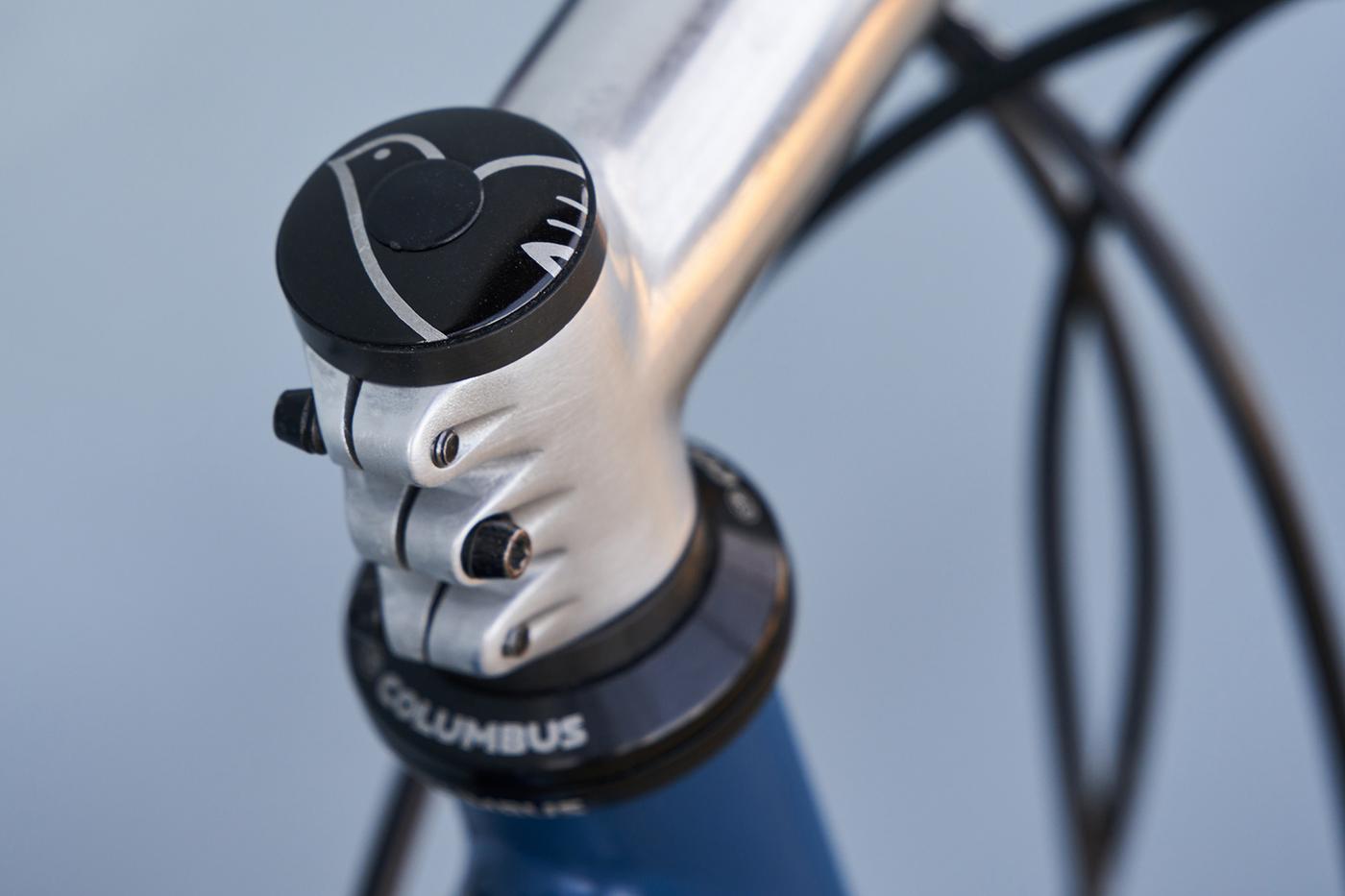 The stem was painted red but polished up nicely to match the seatpost. The blue paint was done by me, courtesy of Lowes and Krylon. Maybe one day it will get a proper fancy paint job, but I wanted to put some miles on it before winter and also ride it to the Philly Bike expo in November so I could show Carl and Steve the finished bike, so I couldn’t wait to have it painted. I scored the seat bag at the expo from Reload bags. 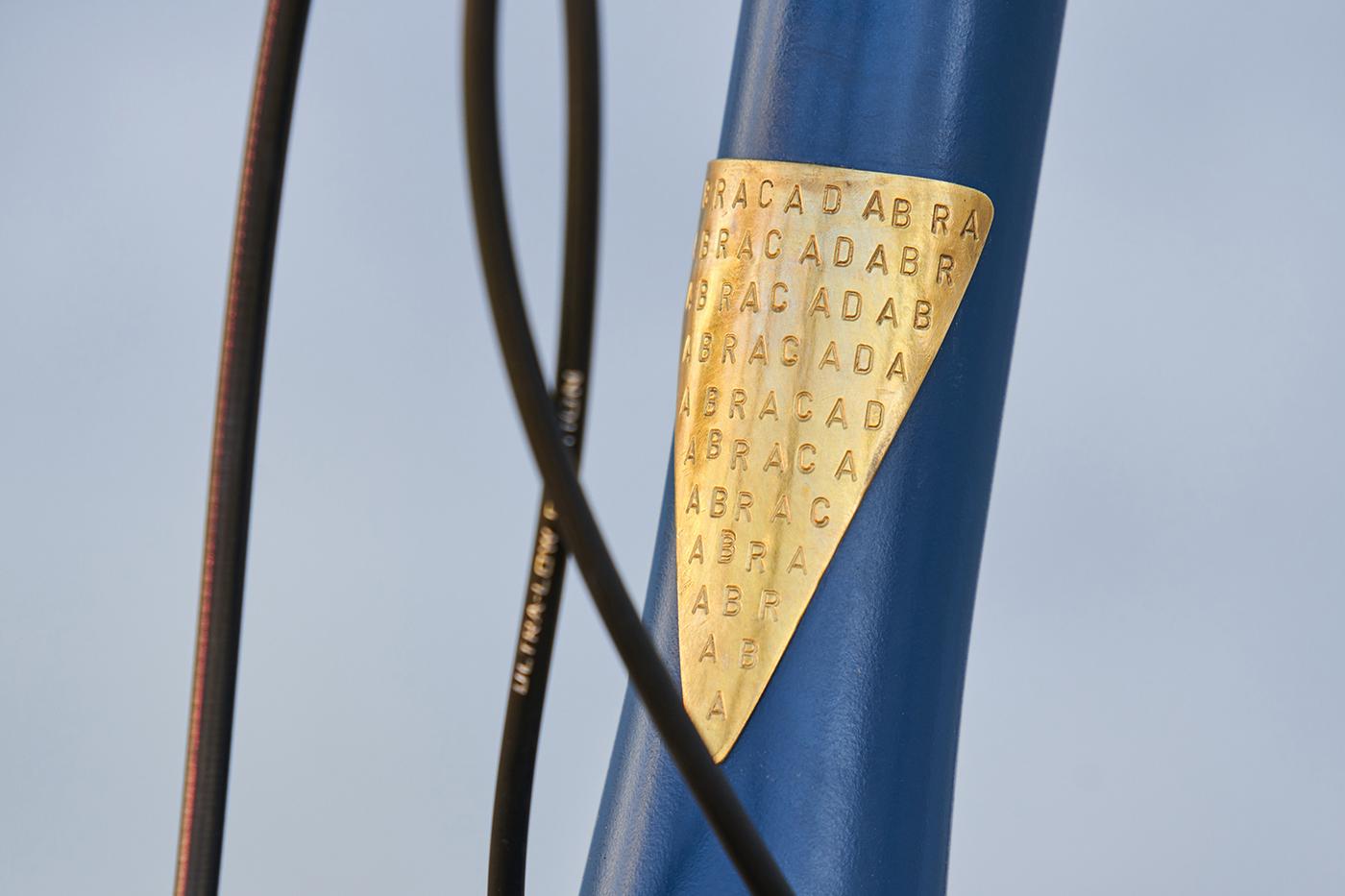 The headbadge is something I discovered described in a book called “Christ Stopped at Eboli”, the memoir of an Italian doctor sent to live in exile in southern Italy in the 1930’s for opposing the fascist regime. The people in the area where he was sent would wear a similar pendant around their neck when they were sick, to ward off evil, or needed a bit of good luck. After a bit of googling, it turns out that long before the word ABRACADABRA became synonymous with magicians, it was used in many cultures for centuries for those same reasons. It seemed like an appropriate thing to put on the front of a bicycle since bikes have always healed me when I’m not feeling my best. I hammered each of the letters myself and getting them to line up properly was almost as difficult as building a bike frame. 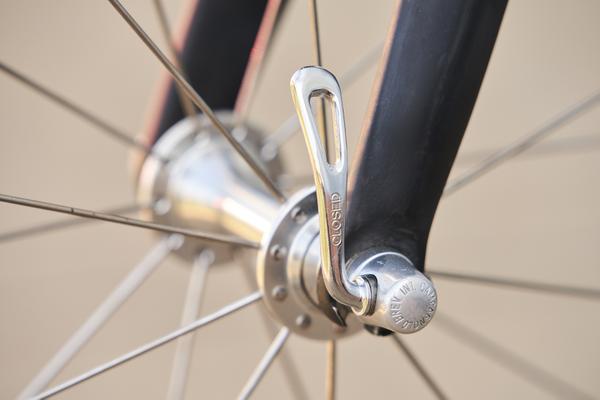 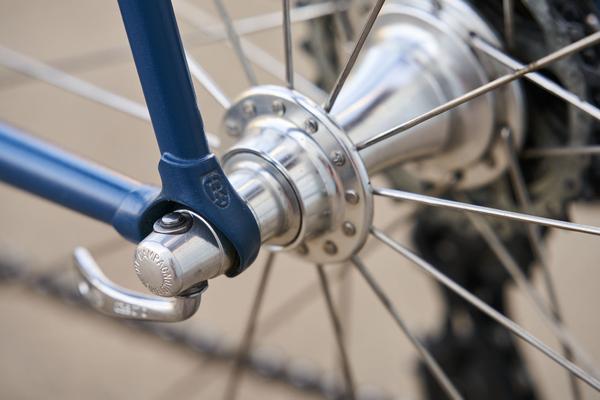 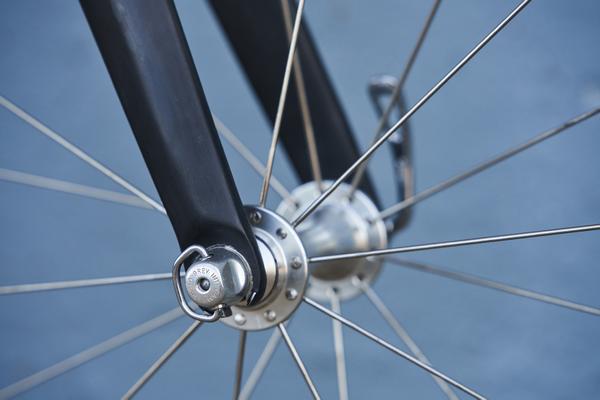 Now that I’ve built this first frame, I’m continuing to build more at home and plan to have a couple more rolling at some point this year. I’ve ridden a lot of bikes in my life and every single one has put a smile on my face. However, none give me the grin I get when I swing a leg over this bike that I built myself (with loads of help from Steven and Carl of course) from a pile of tubes and an idea. Building my own frames has been something I’ve been wanting to do since I was a teenager and my only regret in taking this workshop was that I didn’t do it decades earlier. 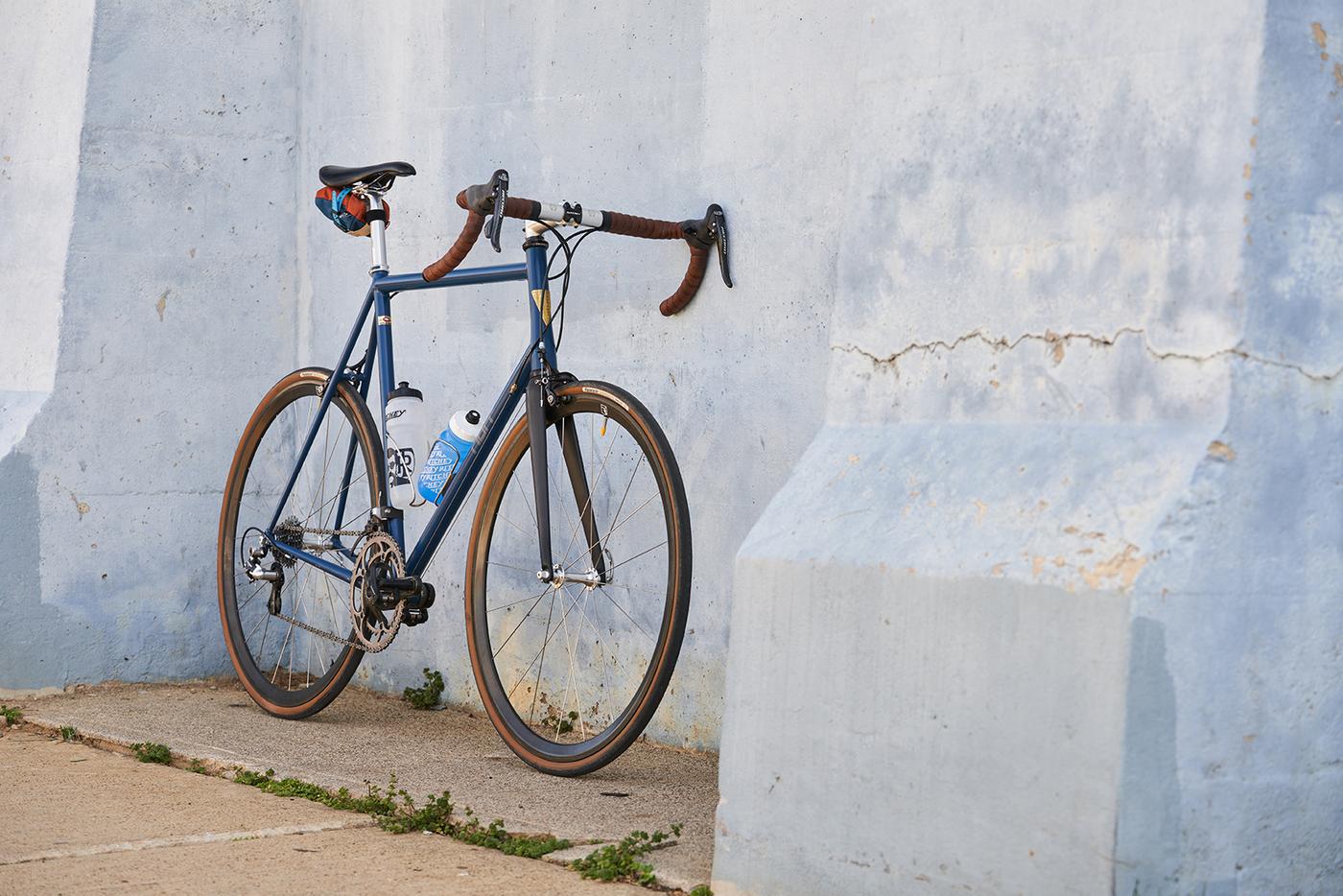 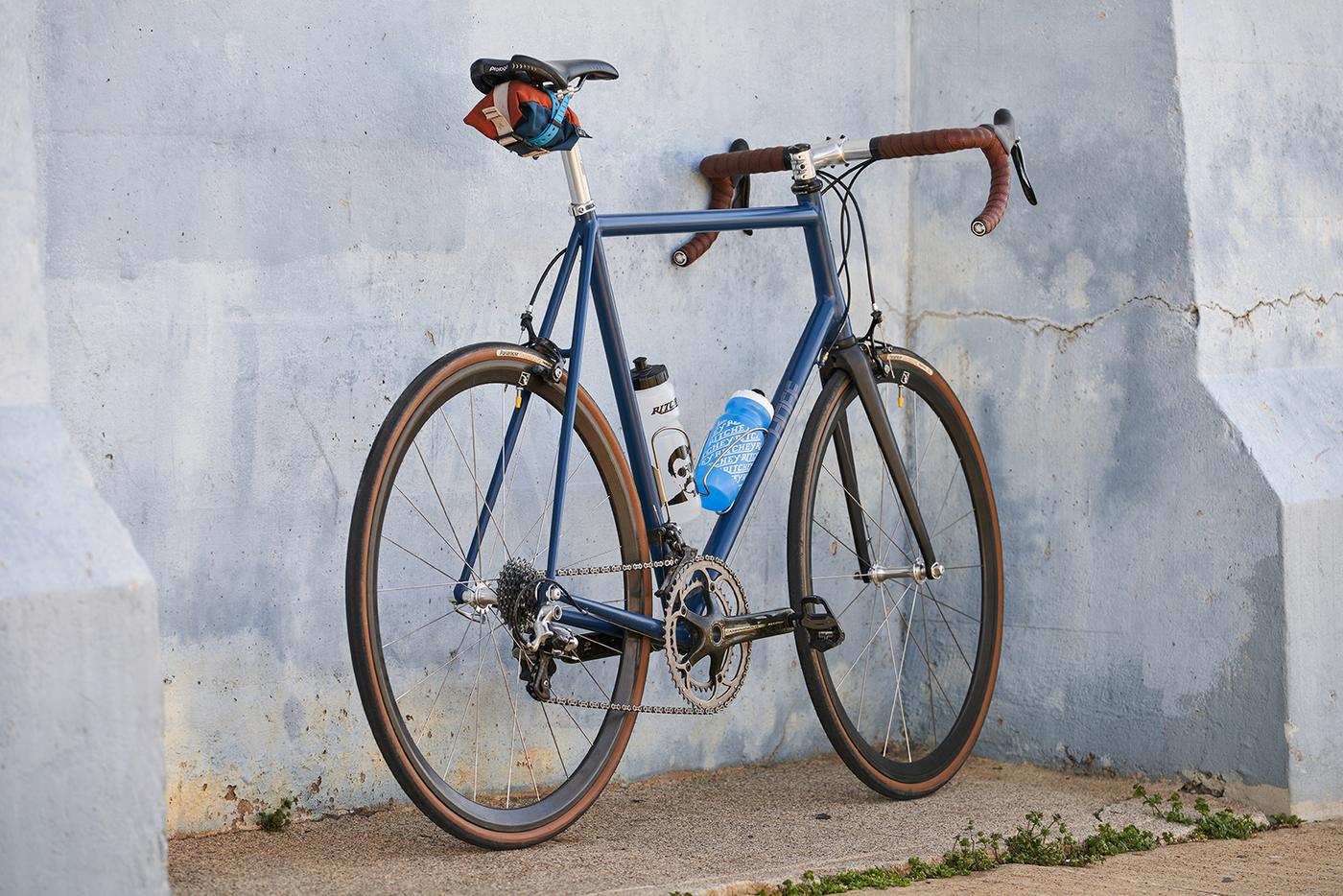 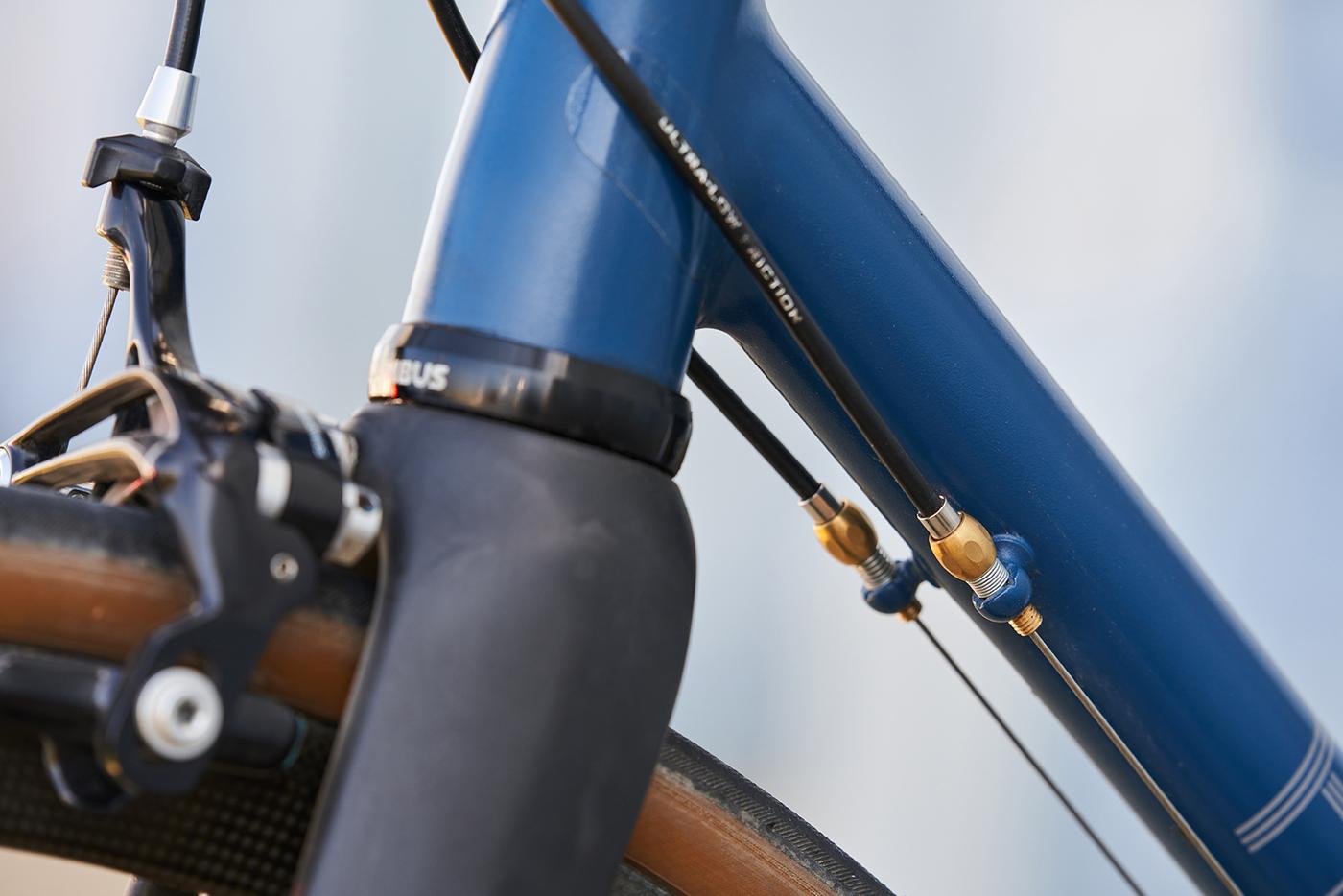 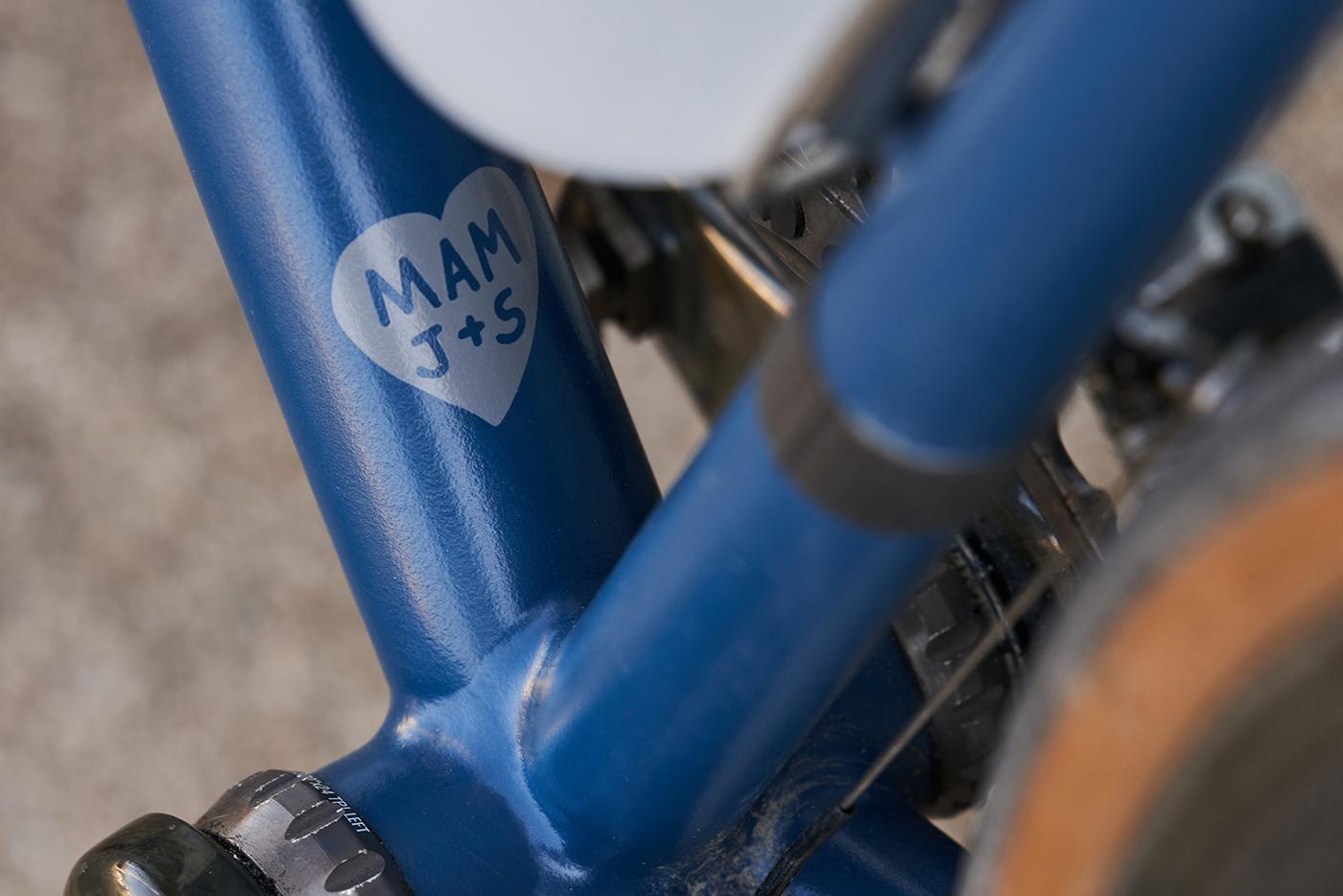 Note on paint: The initials in the heart on the downtube are for my partner Mary Anne, and two kids Julian and Sacha. Mary Anne selflessly encouraged me to go learn to build bike frames while she stayed home alone for 10 days with the kids, which is never an easy thing to do. I can’t thank her enough for enabling this experience for me.