A while back, I posted about Andy Hampsten’s most famous photo; him covered in snow on the Passo Gavia in 1988, while riding a Serotta-built Huffy. The photo inspired that House Industries print and even Andy to make his own prints of the photo with a graphic overlay. He even signs each print. I ordered one of these back when I first posted about it and it finally came in the mail. I guess it takes a while to get Andy to sign them!

Sure, it may not seem like that big of a deal, but let’s not forget Hampsten’s legacy. For this week’s Merckx Mondays, we’ll take a look at some of Andy’s moments while riding for Motorola in the 90’s. 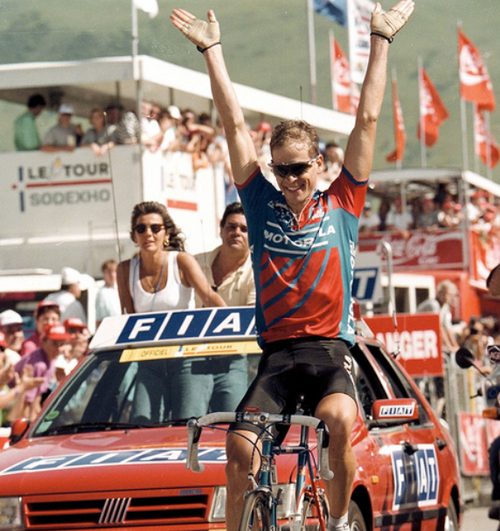 During the Tour in 1993, Hampsten was riding on Specialized’s new carbon wheels. Specialized later sold the technology to HED. Here he is, during the same TT event in the 1993 Tour, on a warm-up ride. Note the different helmet and the appearance of the Eddy Merckx Podio shoes prior to putting on his covers. On a side note, I also came across a photo of Lance wearing the Podio shoes. Well, at least they look like Podios. Lance Armstrong during a team Motorola training camp ride. This photo brought me to email Jeremy at Tears for Gears for some information. Supposedly, Diadora made the shoes for Podio and that’s what the team was usually wearing. They do look strikingly similar though don’t they? Some of the best photos from the era usually came from fans. Sure, all the cycling magazines could really get into the turns and catch athletes at their peaks, but the fans really caught a glimpse of the person behind the kit. After weeks of searching for photos for this post, I think this one is by far my favorite. In an era where many racers didn’t wear helmets, the bikes were made of steel and doping wasn’t nearly as huge of an issue (or at least not nearly as moderated), Andy Hampsten was a great rider. The early 90’s Team Motorola was an unstoppable machine and many great pros came out of it with a life-long career in cycling to look forward to.