With a visa running out and heavy rains setting in, Ryan Wilson makes the most of his remaining time roaming the Colombian countryside. Following unknown lines on the map through the country’s north-central Andean artery, Ryan’s reportage and photos give a true sense of Colombian biketouring. 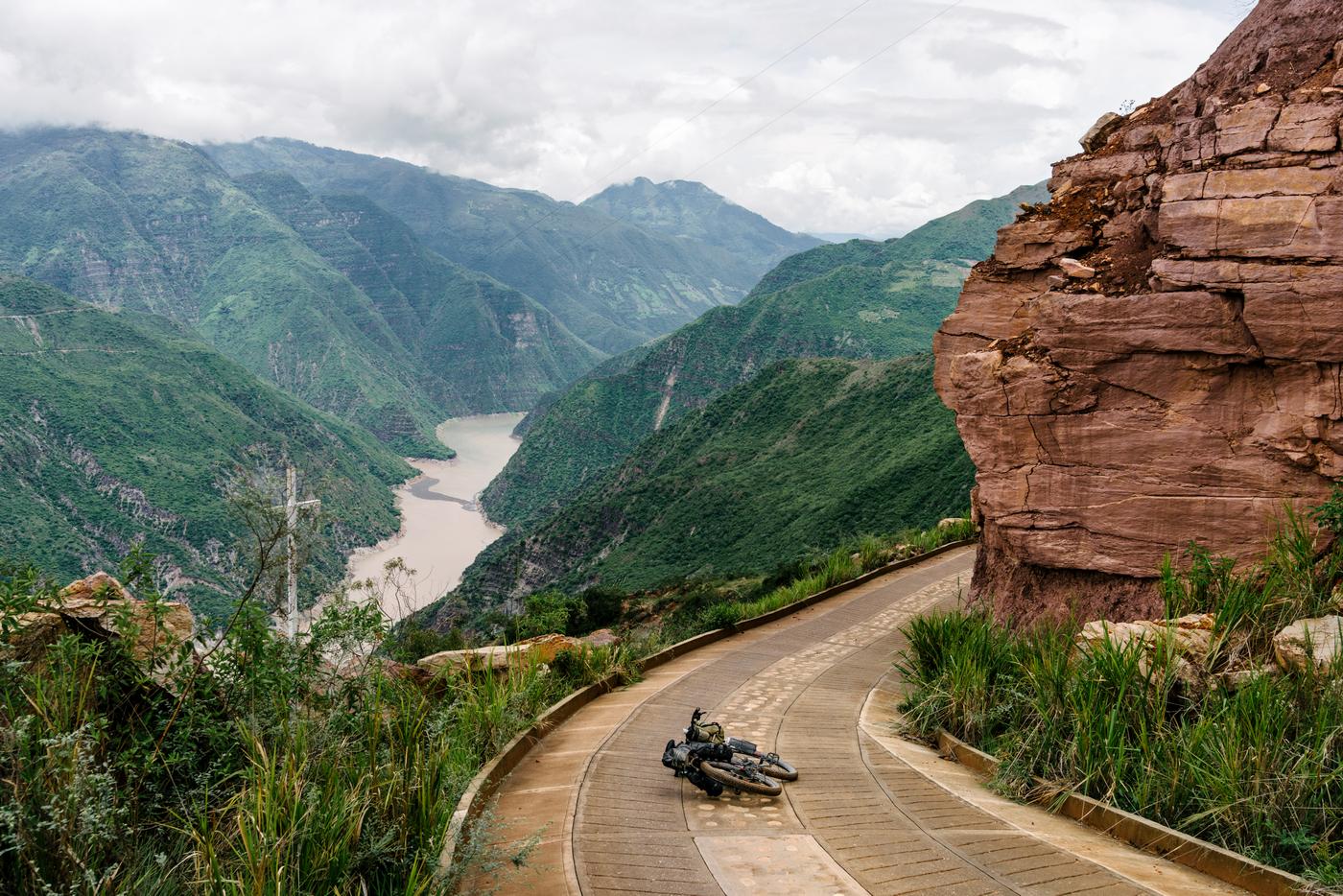 As I made my way from the coffee bean fields and nevados of the Quindío region, with a brief stop in Antioquia, I set off for Santander. In classic Colombian style, my route would find me crawling up one steep gradient after another, this time trading the rainy Colombian jungle for a more arid but no less beautiful landscape and many picturesque villages.

Through clusters of pineapple fields, I made my way toward a squiggly little checkered line I’d seen on a map that plunges deep into a river valley before immediately zigging and zagging its way back up the mountain on the other side. I knew very little about my planned road, but my satellite map showed a sizable bridge crossing at the bottom, so I figured it must go through. 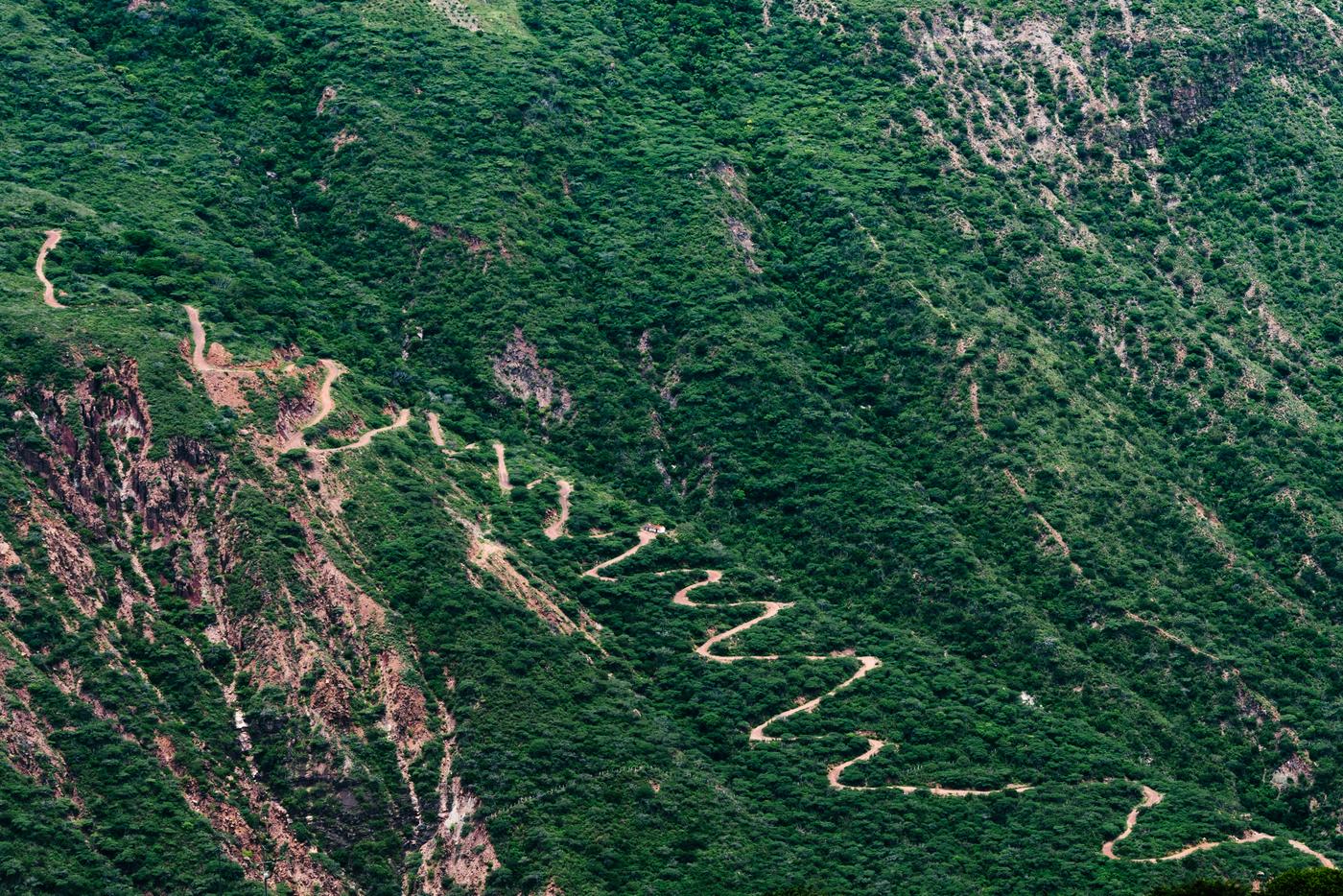 My excitement was checked by a small speed bump when I reached the top of the plunge into the canyon to find a rather old and worn-looking sign that indicated the road was closed due to landslides. From my vantage point, I could see the intact bridge deep in the valley below, so I decided to give it a shot, though the idea of backtracking up this insanely steep slaloming ribbon was looming large in my mind with every meter of altitude I dropped.

The terrain became loose and, at times, more of a dry river bed than a road, but it was still passable down to the bridge with my chunky 2.8” tires. From here I had a relentless 1800 meters to climb toward the sky before I’d reach the next town. Before this stretch of riding, I’d sent my camping kit ahead to travel with a slightly leaner setup, so I’d have to make it up this climb to get to a hotel whether I was feeling it or not. 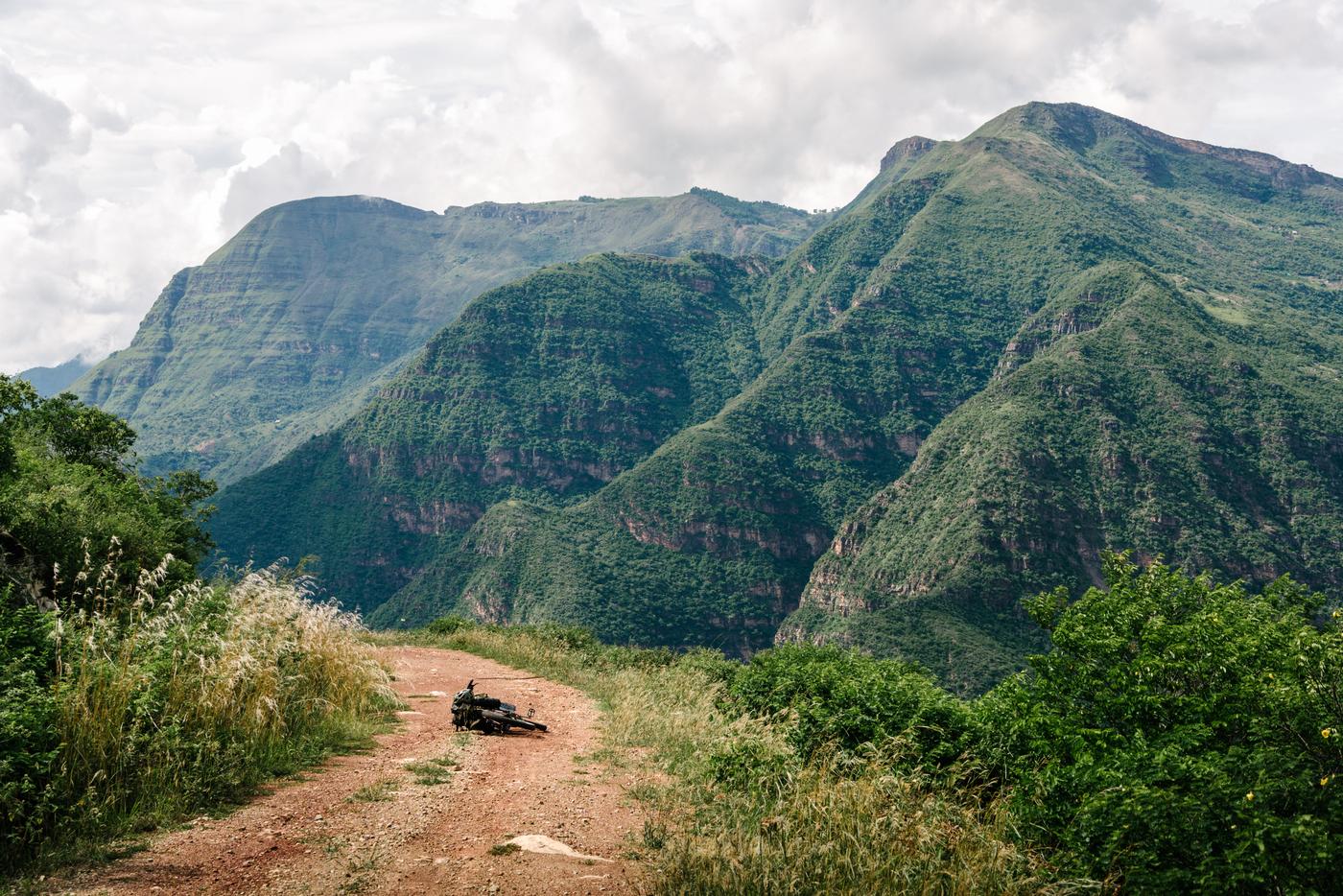 Around 2 pm, with the heat of the low altitude slopes of the climb blasting me, I was pretty much cooked, filleted, braised, skewered, you name it. I just wanted to curl up in a ball, pass out on the side of the road, and wait for night to come and make the weather more bearable for the ascent.  But with more than 1100m still ahead of me, and still not feeling great about the idea of riding too late into the night, I pushed on, just trying to make it one switchback at a time. The carrot on the stick dangling in front of me being that the higher up I went, the quicker the temperatures would drop.

I rolled into Betulia around an hour after dark in the end and was thankful to be met by a friendly empanada vendor cooking ‘em up fresh in the town square and followed that up with a frigid shower and my hard-earned rest for the night. 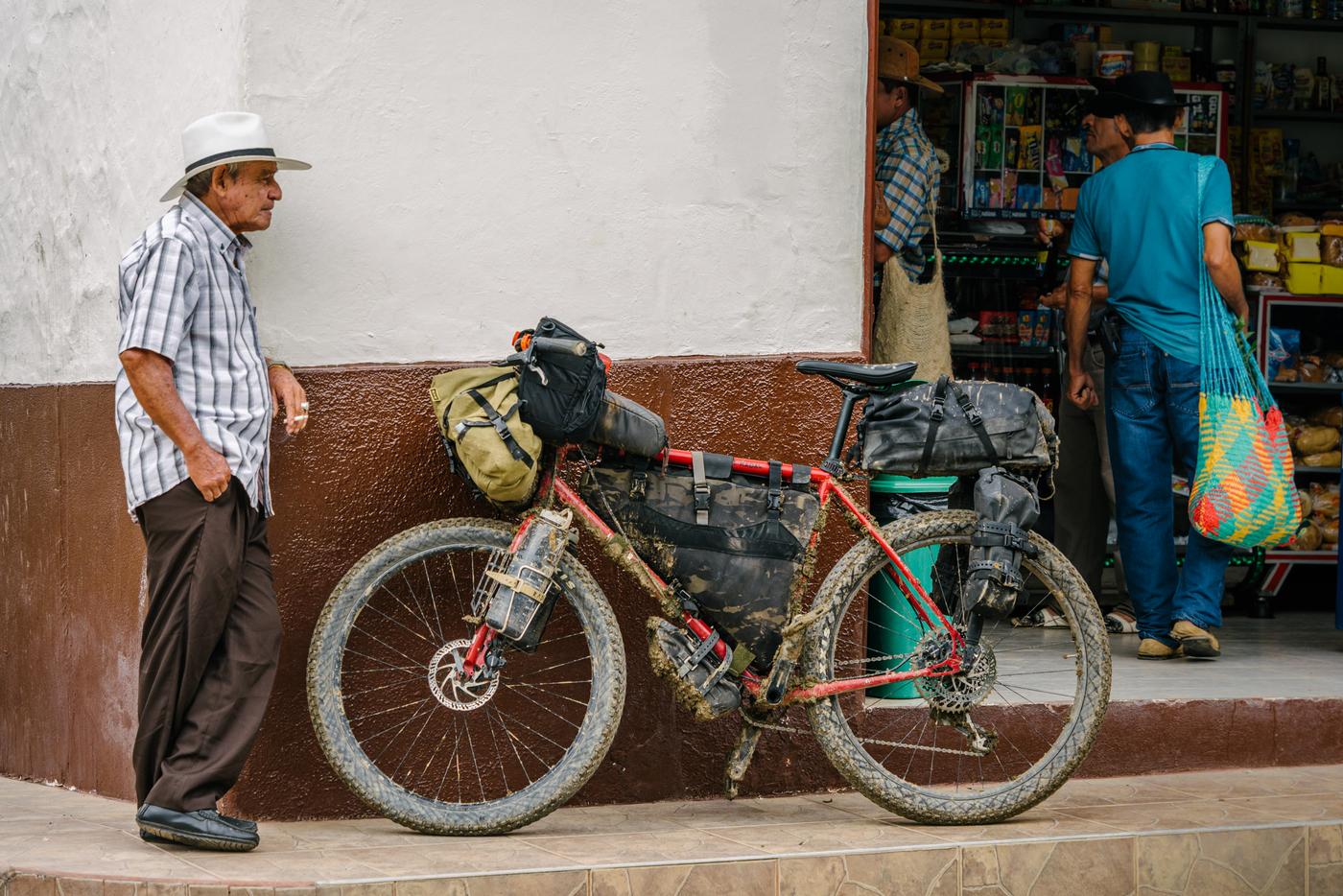 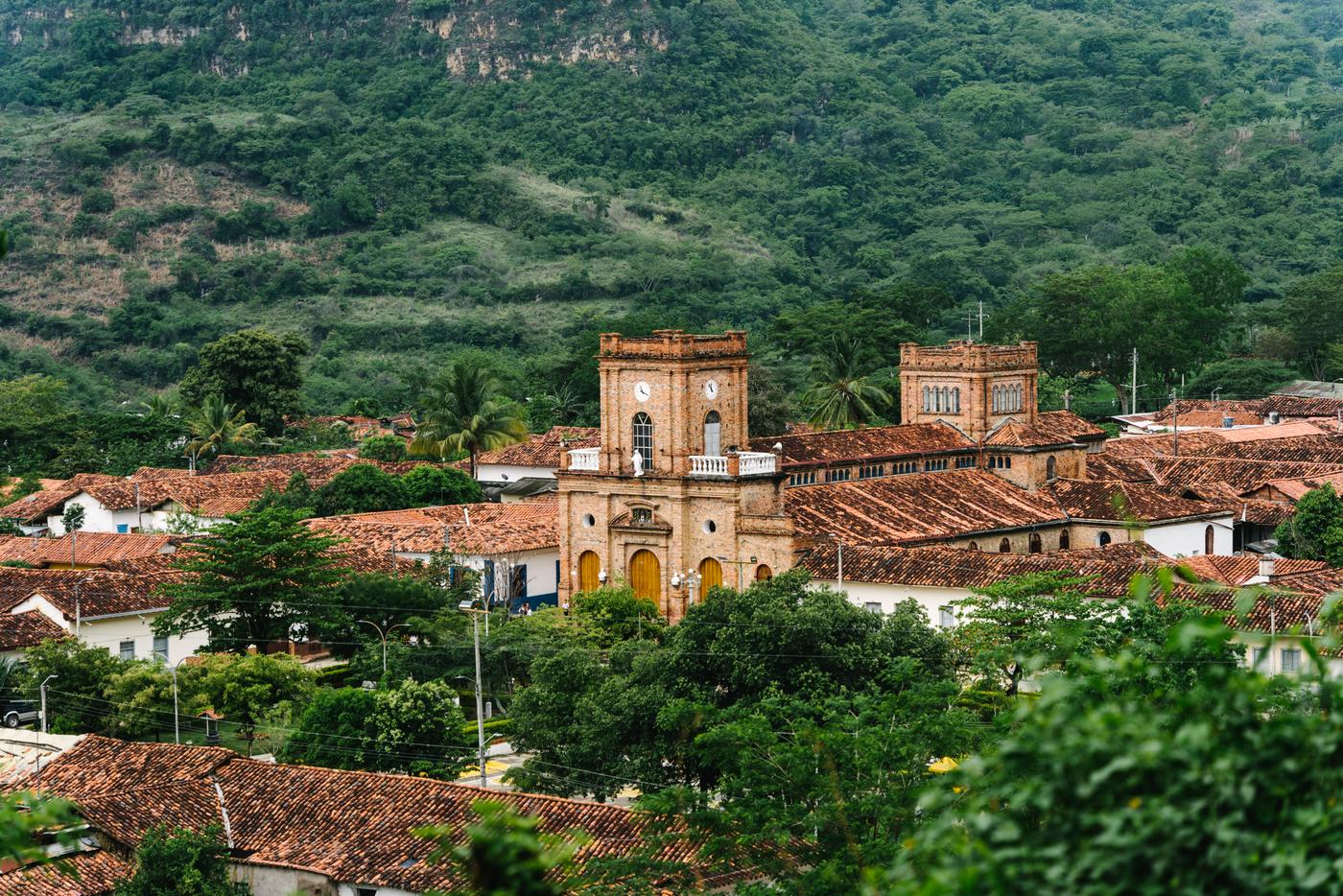 From Betulia there was a beautiful stretch of riding between the small colonial towns of Zapatoca, La Fuente, and Barichara. There’s little I enjoy more than rolling into town and hitting up a local comedór in one of these villages and watching as local people go about their day. It’s in restaurants or outside of the small shops and churches that you see a lot of the character of the people come out. 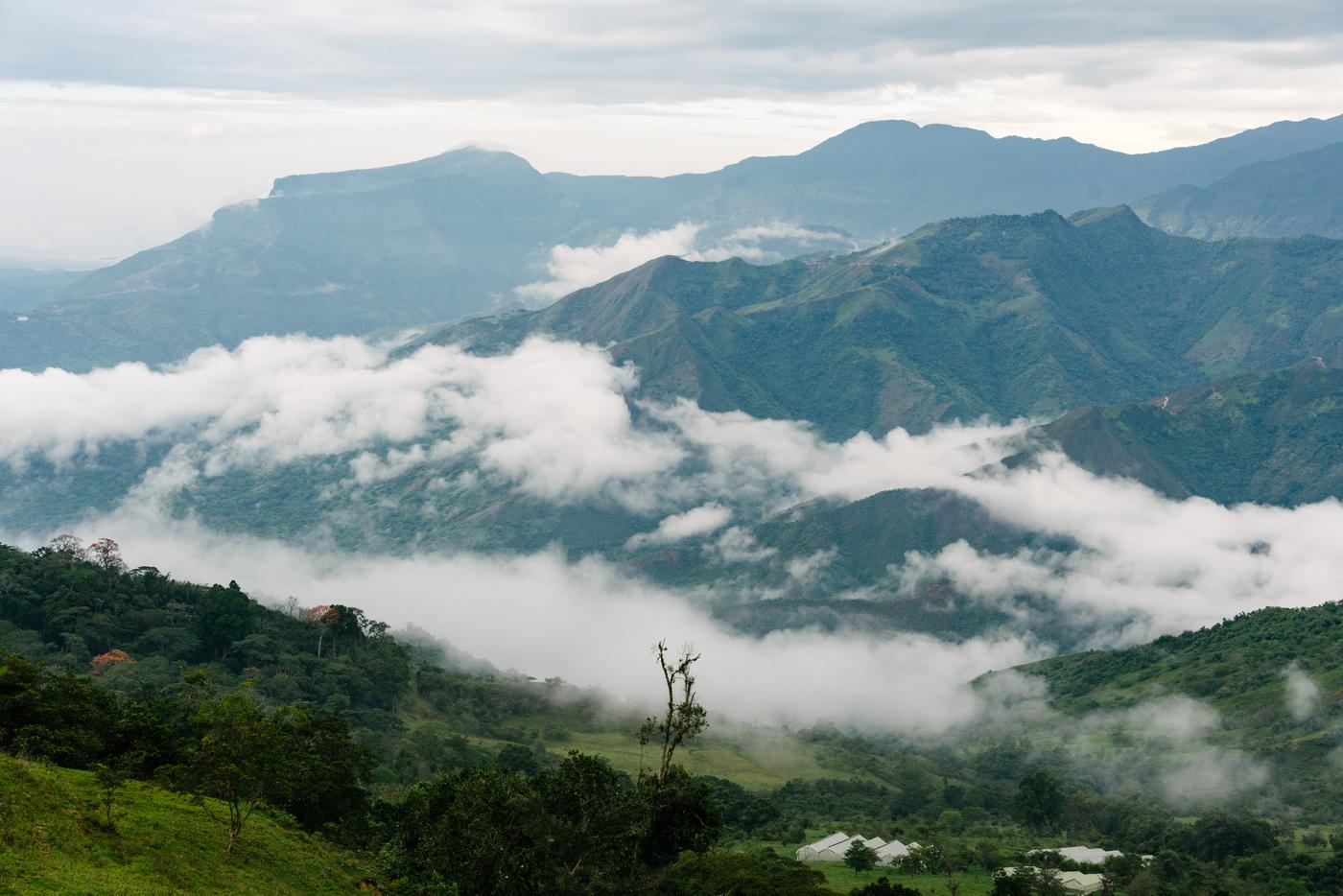 On most mornings in these hills, I was mesmerized by the morning clouds dancing along the mountainsides, creating an ever-changing view as I was riding through. This constant sense of weather in motion is one of my favorite parts about riding in Colombia. The clouds ebb and flow with the sun making infrequent appearances from behind their veil, but it makes those moments even more special. 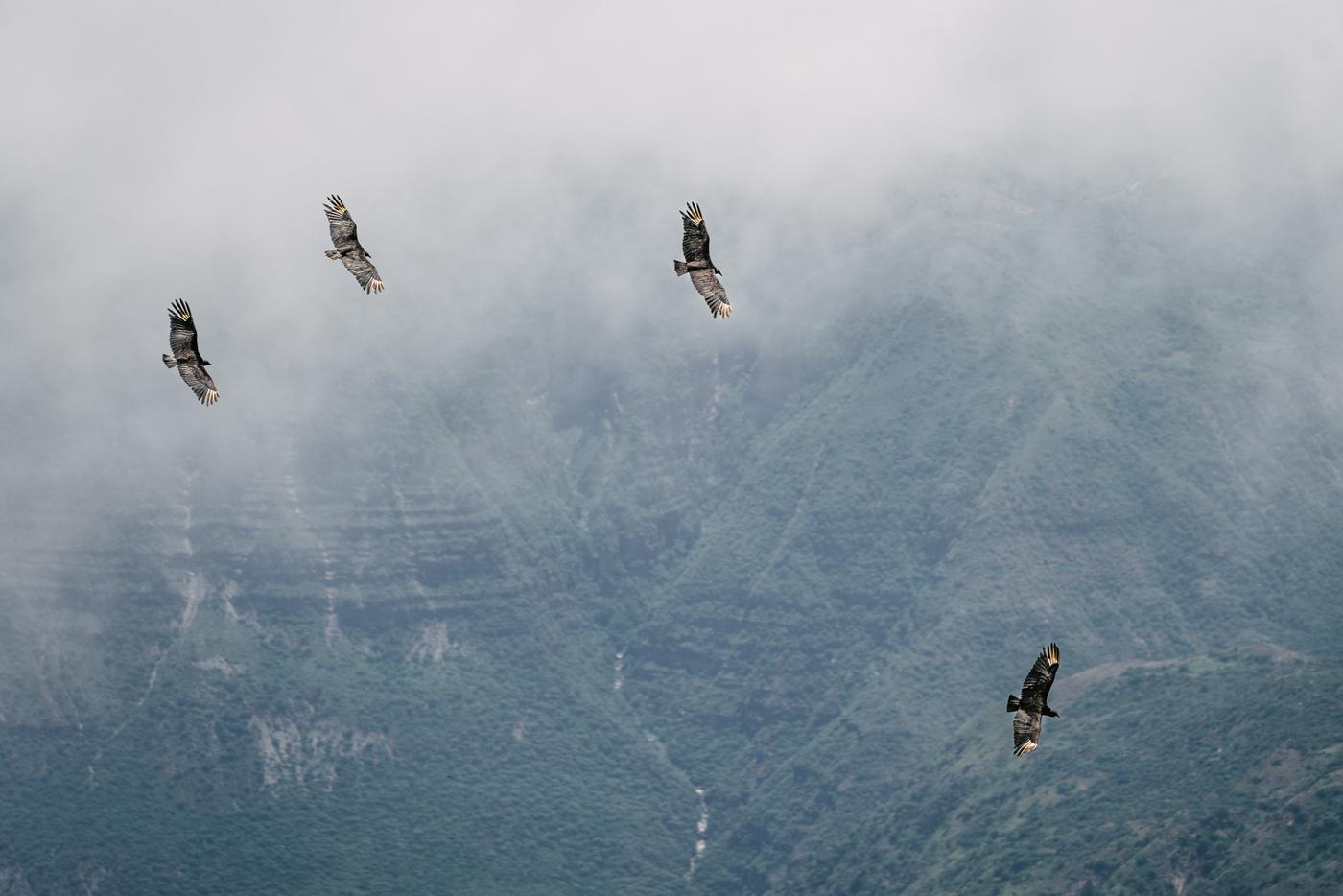 I continued my ride south, making my way toward the state of Boyacá along a stretch of beautiful dirt roads. No doubt there is an endless number of tracks in this area that are worth coming back for, but for now, I could only pick one route and go for it.

After some rare rain-free days, I was immediately greeted by a couple of days of downpours as I approached the higher mountains on the edge of Boyacá. I was soaked to the bone, but the time on my visa was running low so I pushed on rather than waiting for conditions to improve. 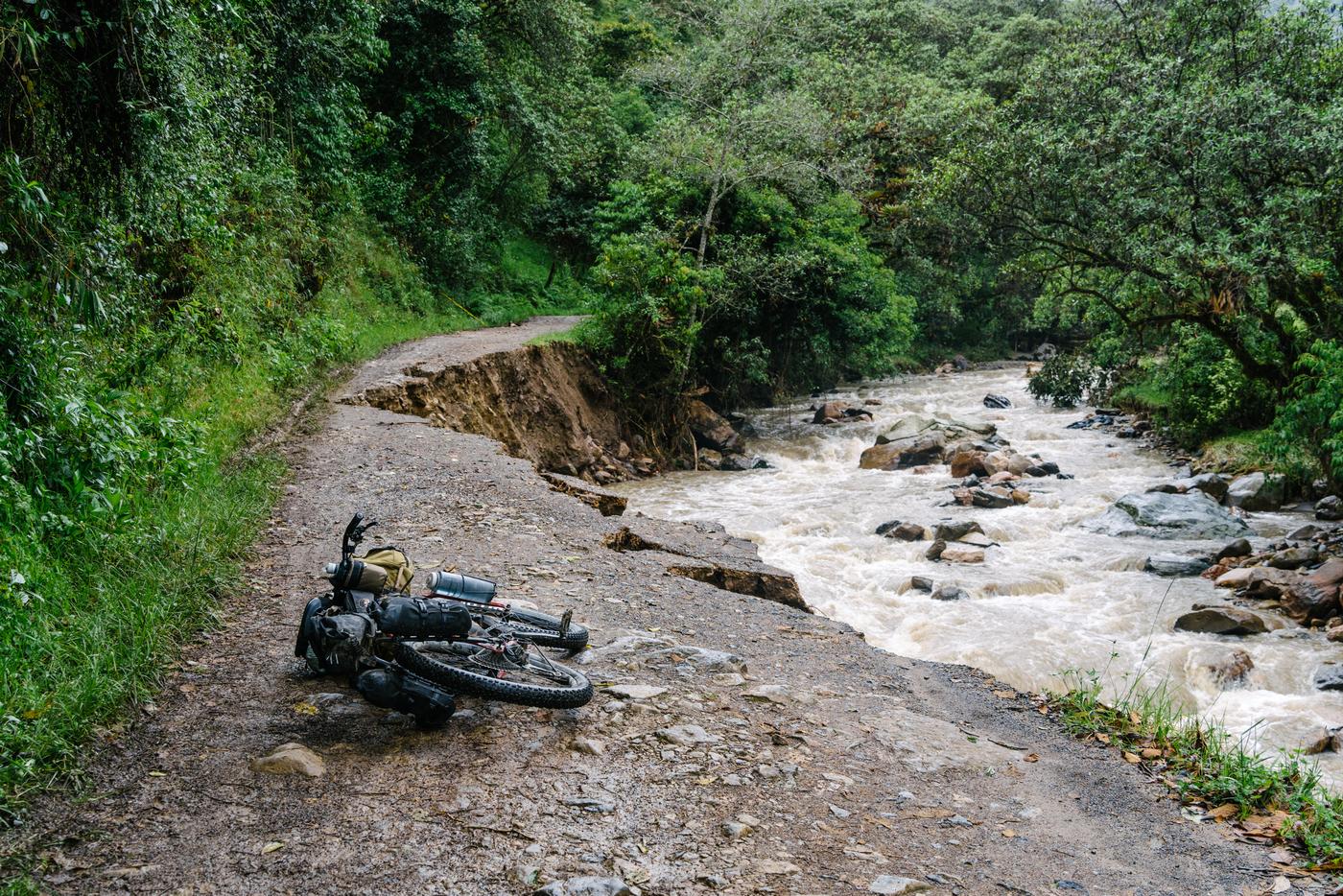 Eventually, the days of rain took their toll on the landscape and washed out the road I was heading up in numerous places. Lucky for me, I could just barely squeak by on the edge of the mountainside or this would have resulted in a very long detour. Still, it is a bit unnerving to push along the edge of loose soil that looks like it’s ready to break free at a moment’s notice, straight into the river below.

At one point I had to scramble up a muddy hillside that was so steep and slippery that I ate shit directly into a full head-to-toe mud bath, and required the help of a local caballero just to get the loaded bike up the slope without sliding back down the hill for the 10th time. 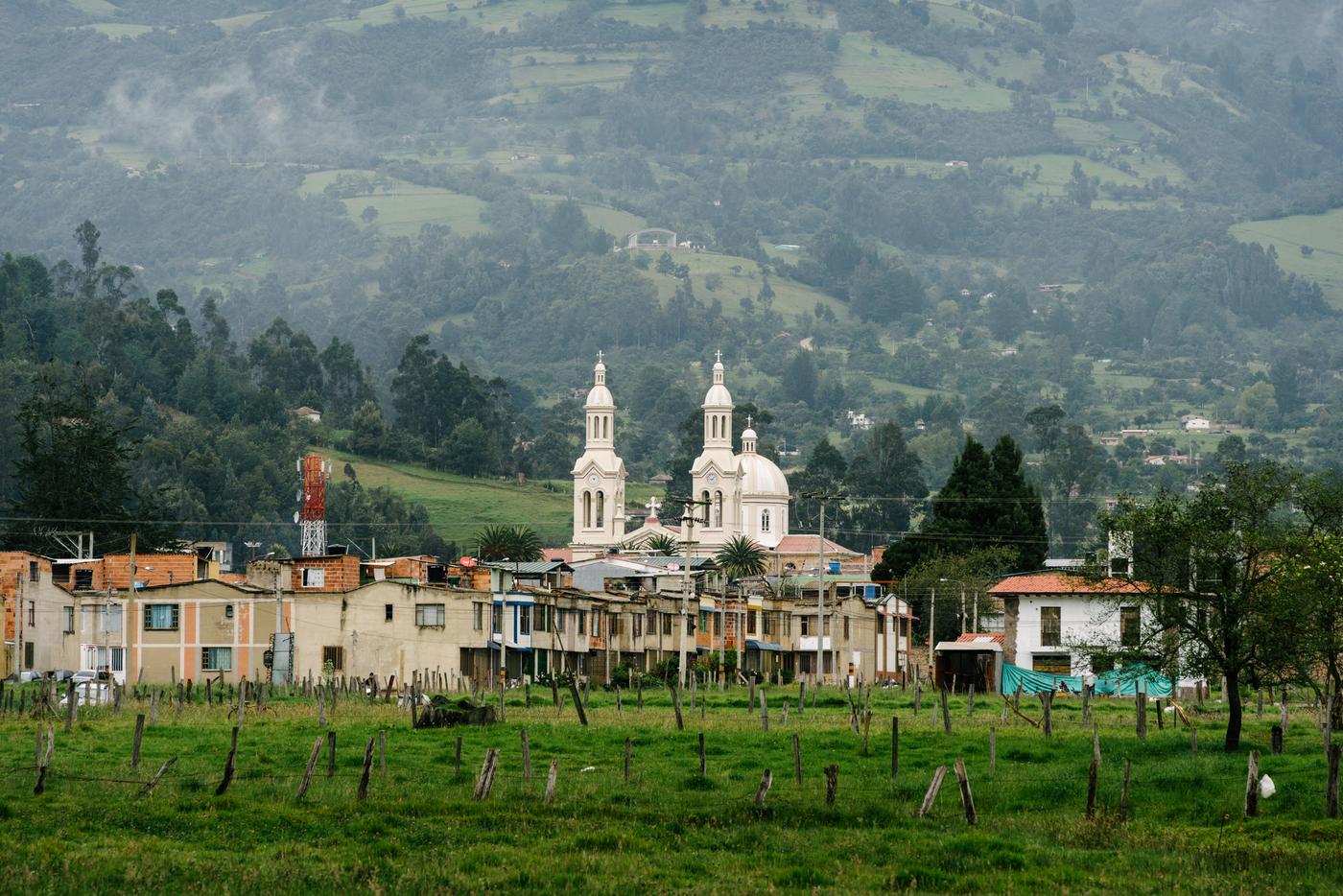 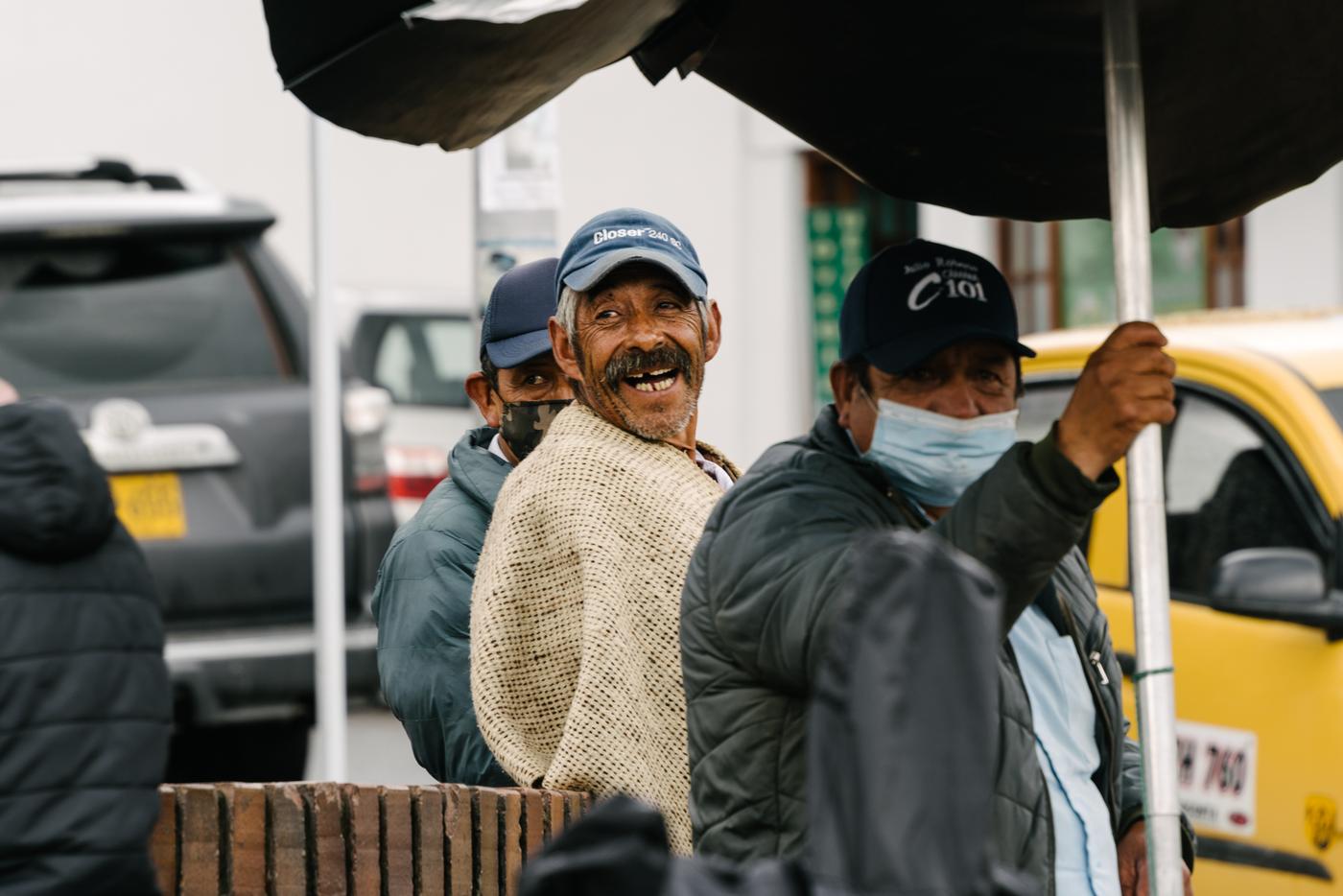 Finally, I entered Boyacá at the town of Belen through a long and windy descent. Boyacá is considered one of the finest places to ride in all of Colombia. With lush hills, nevados, páramos, and endless roads all around, it’s not hard to see how this province has birthed pro tour roadies like Nairo Quintana. And the locals here more than anywhere display their pride in Colombia’s cycling heritage and their hometown heroes. 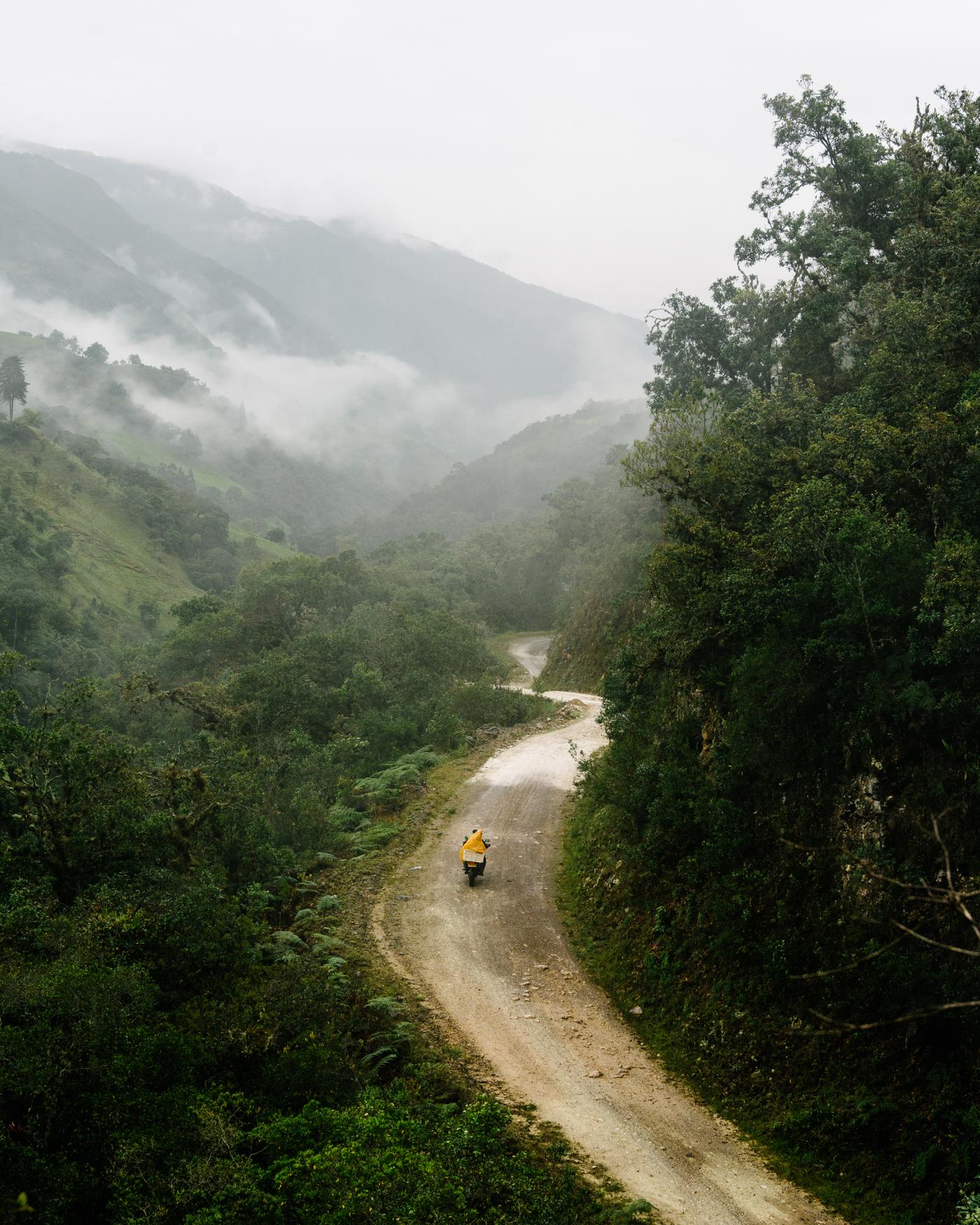 After a bumpy start to my trip in Colombia, getting mugged, having gear stolen, and my confidence shaken, I really started to hit my stride here with this section of the trip. I was feeling more comfortable with the routine of life on the road again and a little more willing to let my guard down and worry just a bit less about the intentions (good or bad) of the people I was crossing paths with along the way.  These natural places, small rural towns, and the people living in the remote hills show the heart and soul of the country.

That made it even more of a shame that my days here had run out well short of finishing all of the routes I’d planned.  But on the bright side, that just leaves more reasons for a return trip…